The beautifully paved bike trail through the forest ended shortly before the border in Lithuania. What was ahead in Latvia? So far,I had mainly cycled in the forest. What came next?

After the trail ended, I cycled on the main road. There was hardly any traffic.

Behind the border was the beginning of a construction site. 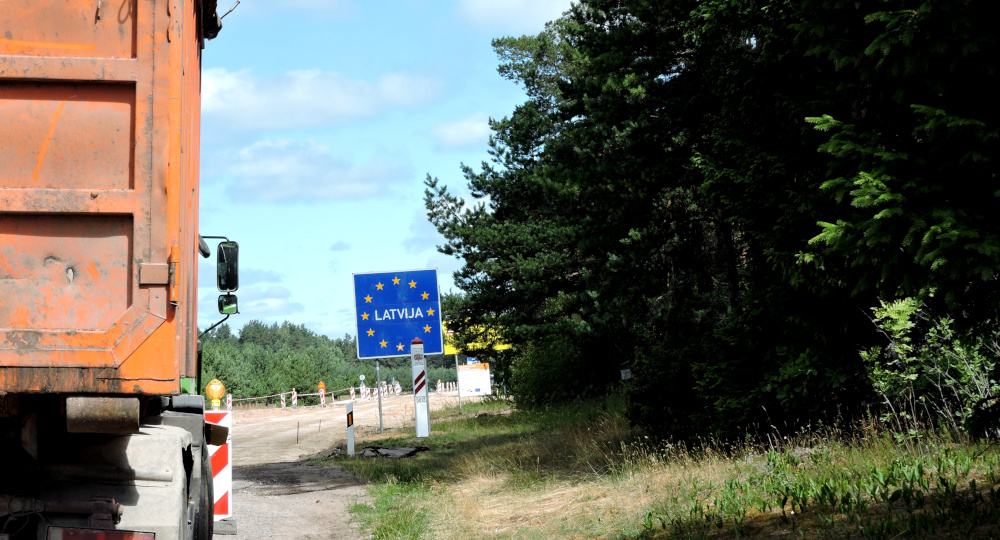 Different from my African experience, this construction site was was neatly organized into small sections. Each section had its own traffic signal. That could have been annoying but I had the company of an older local cyclist. We couldn’t communicate but nevertheless had fun.

He turned early on but I had to continue into the headwind. The south of Latvia was very quiet. There wasn’t even a bus shelter where I could have taken a break from the wind.

After several hours, I finally reached Nica. I immediately went into a grocery store and filled up with calories, so that I could manage the last twelve kilometers. There were dark clouds on the horizon and with the makings of a storm, I didn’t feel like stealth camping.

Already after six kilometers, there was a sign for a camp ground and I decided to take a look. What a surprise to see two other cyclists from France. They had come from the opposite direction and could easily have sailed on with tailwinds to cover more distance. I enjoyed their company and hopefully they liked mine.

Early the next day I arrived in Liepaja. This larger town was getting ready to welcome more cyclists and the nice bike stands were an indication. 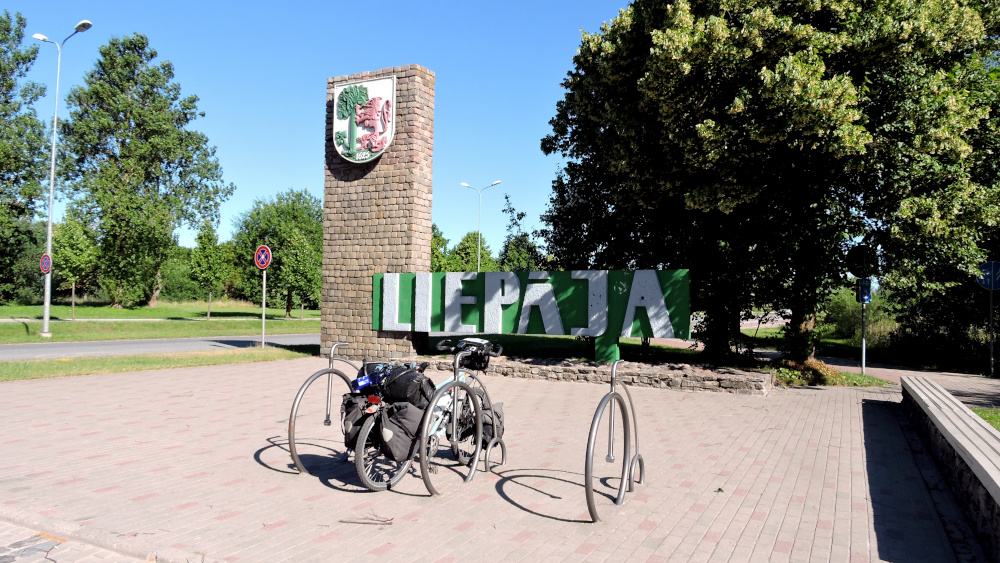 The old town was being fixed up nicely but there were a lot of construction sites, including a bridge over the river which meant a long detour, in headwinds!

I was relieved when I came into a forest. Is there a better shelter from the wind than trees? Fields, on the other hands, were bad news.

I don’t cycle to punish myself and soon I found a nice place in a sunny, wind sheltered spot. After a shower and tea, I felt much better.

Fortunately, one never knows at the beginning how long the headwinds will last. As I mentioned, the forest was much welcome.

I had wanted to only reach Ventspils. Under the protection of the trees, I cycled into town. 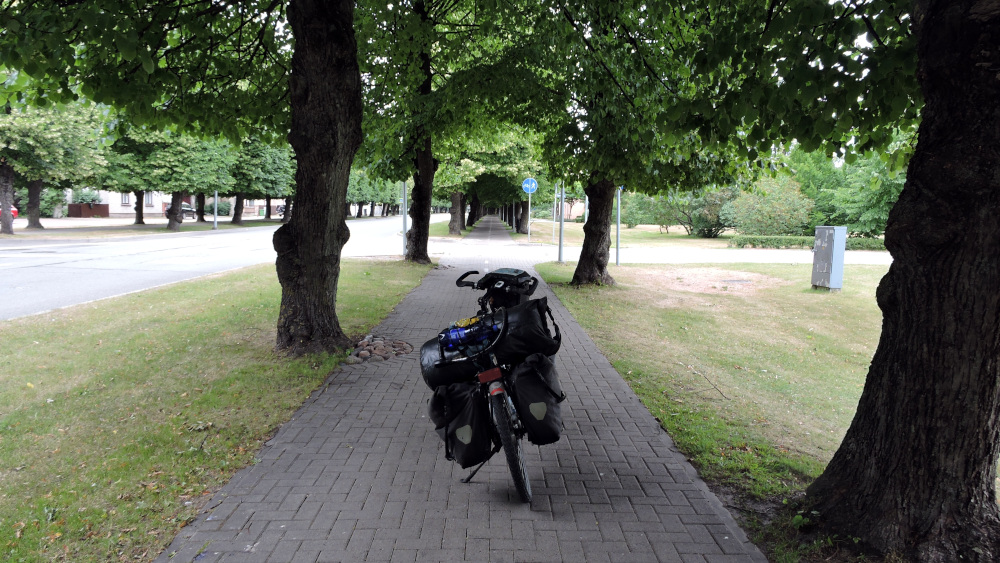 I first visited the city and then went to the campground. 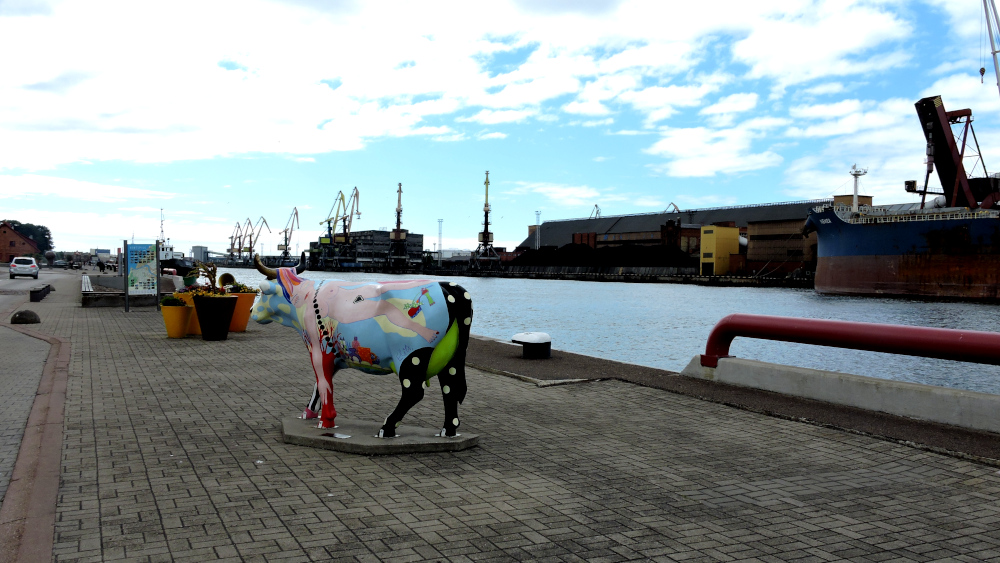 Obviously it was a port city and wind was probably quite common. 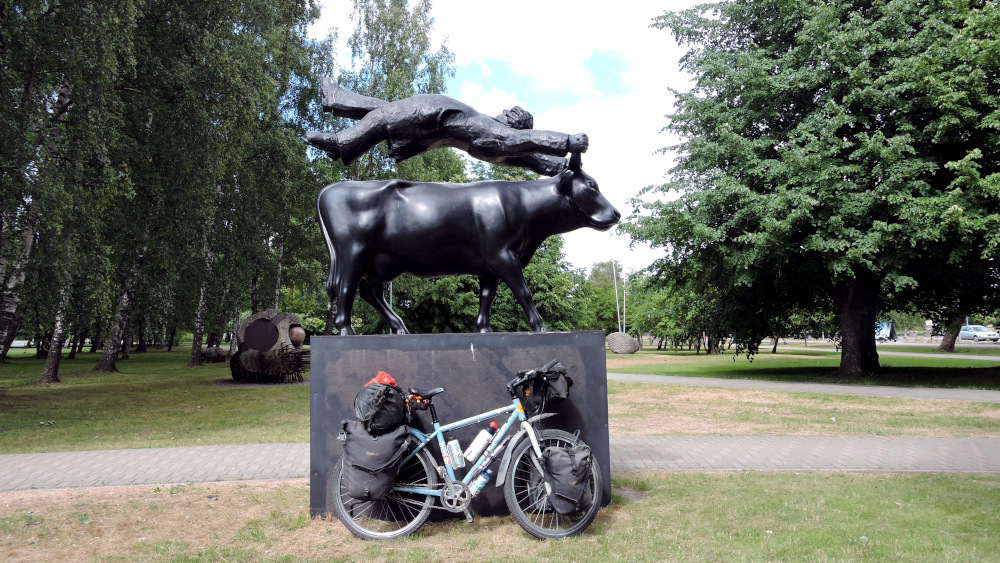 The German name for the town was Windau (Wind is wind and Au is a meadow).

A pretty bike path let through the park and to the campground.

No bad weather and no strong headwinds could entice me to stay there. It was overrun by tourists. Twenty kilometers further north were two more camping sites. I decided to try my luck and thanks to the forest, I managed to reach them. They were nicely situated in the forest and were quiet. In case of rain, I could camp under a shelter, there was a shower, warm kitchen, and even Wi-Fi. Sadly, it was already late and I couldn’t enjoy the place for long.

It didn’t rain during the night but after a few kilometers the next day. 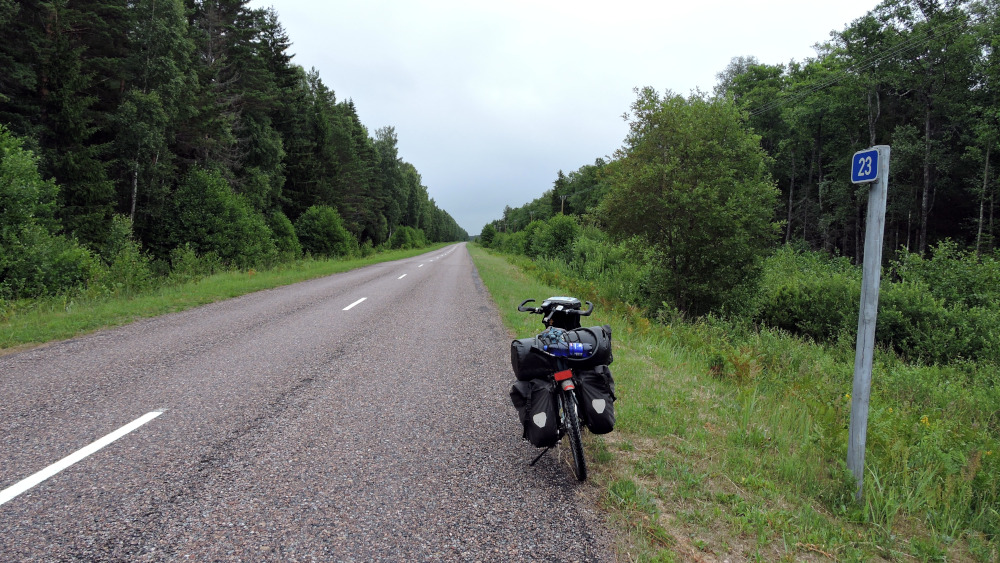 There wasn’t anything to distract me, only turnoffs to camp sites. No shelters, nothing. But even in this weather the forest was amazing. 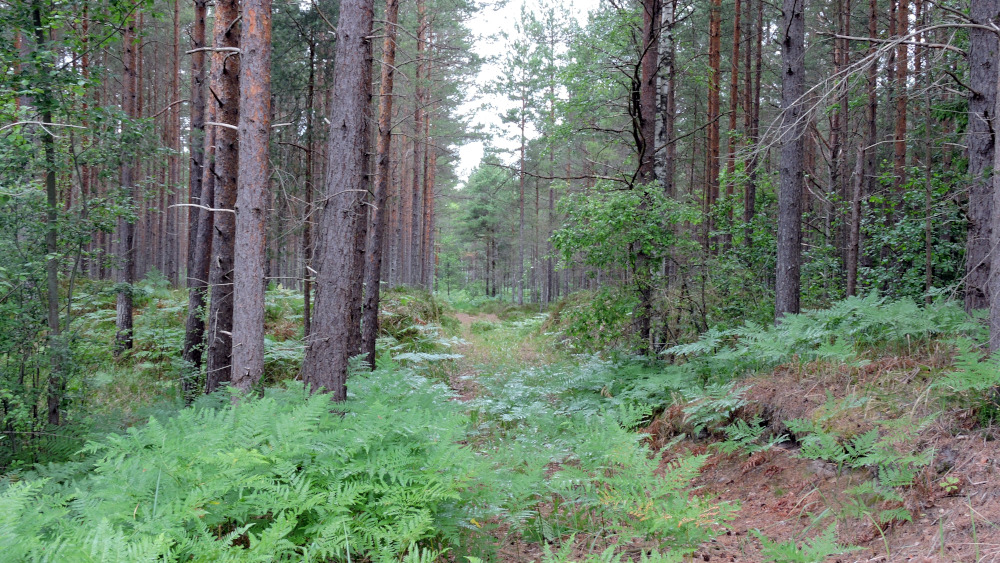 I loved the colors of moss and ferns and couldn’t get enough of them. I passed through a national park and the forest was left to be. Trees had fallen over each other and created a beautiful chaos.

Early afternoon I had reached the top in Kolkasrag. 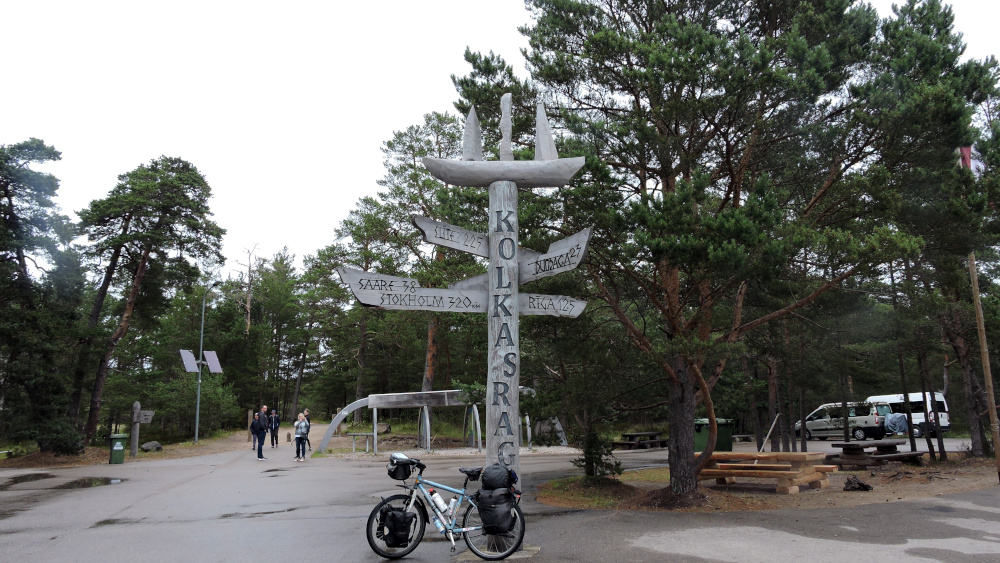 Fortunately, the rain had stopped and even so I was cold and wet, I explored the area. 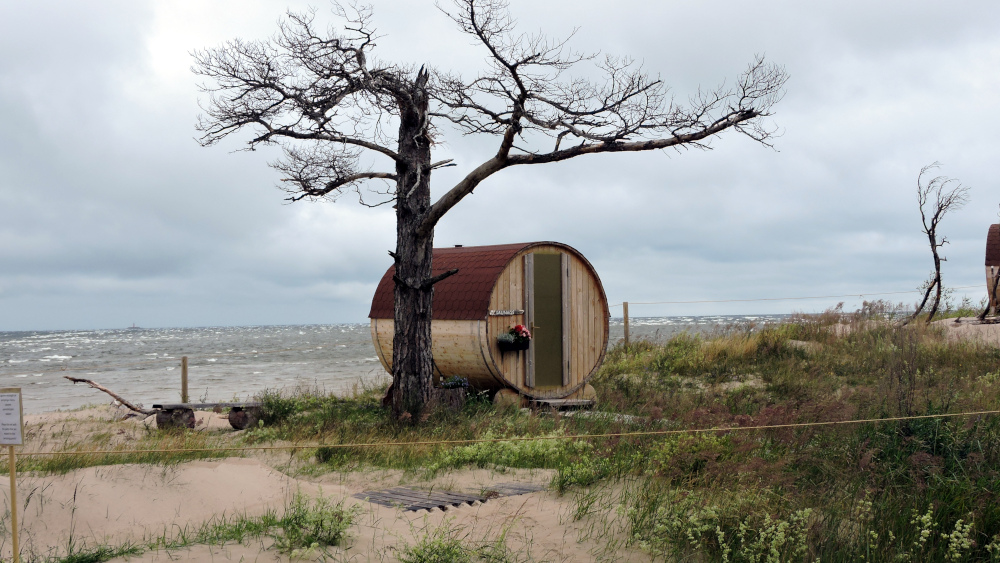 Pretty, tiny holiday cottages. I assumed they were built to keep the wind out.

The area up there was gorgeous and despite everything, the detour had been worth it.

Now I turned south and for a long time, I had looked forward to having tailwinds. At least for a few kilometers.

I looked for a sheltered place to pitch my tent for the night. 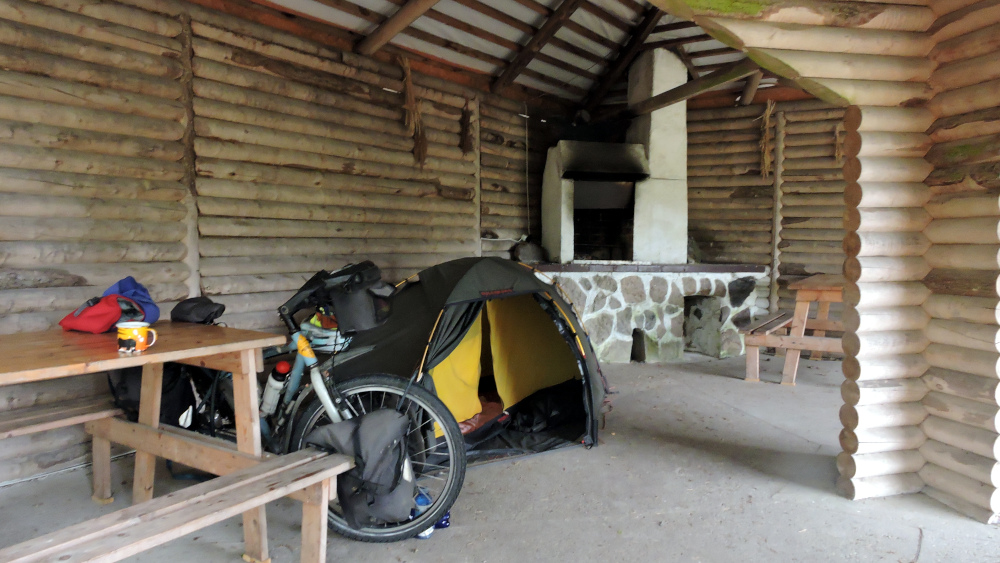 I got a very good Hilleberg tent but I prefer if I don’t have to pack a wet tent in the morning.

Of course, once again it didn’t rain during the night. It only started after I had cycled for a few kilometers and today the rain was heavier and lasted the whole day.

Fortunately, there were some villages with comfy bus shelters. 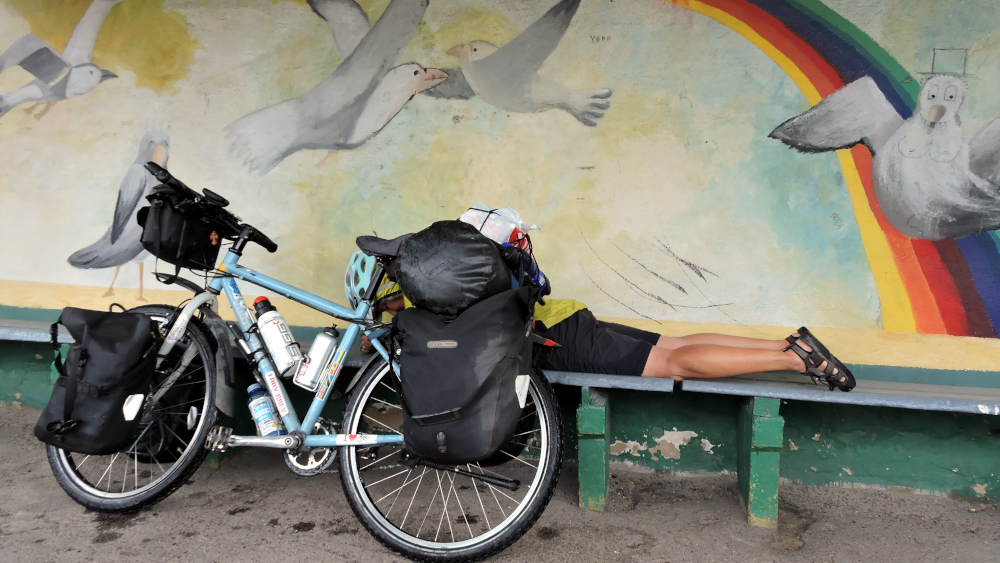 I waited under the rainbow until the skies lightened up. Maybe the sun only appeared to lure me away from the shelter. Shortly after I was back on my bike, it rained even heavier than before.

The rain only stopped the next morning, on the last stretch to Riga. The seaside town Jurmala and Riga have virtually merged. Between them was a good bike path. 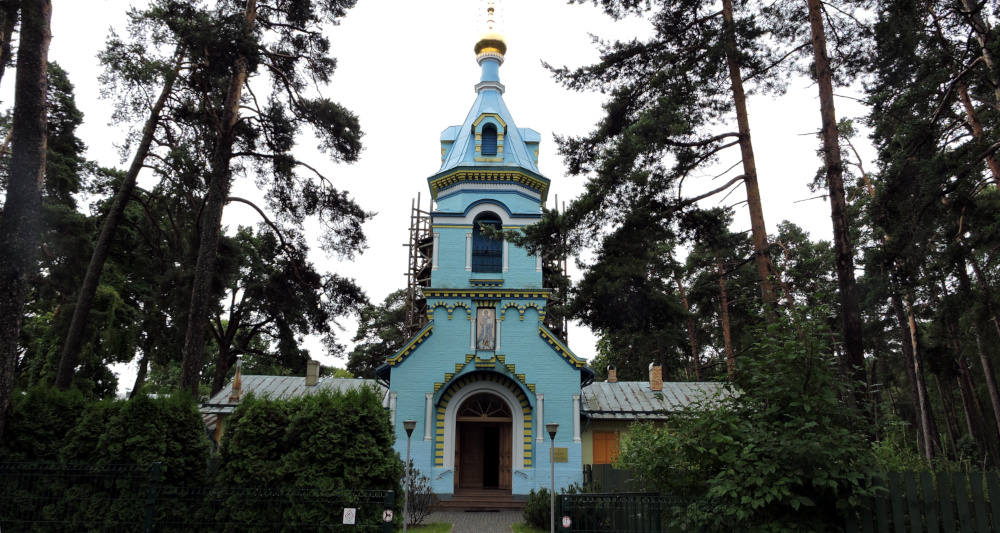 There were a lot of Russian Orthodox churches.

I had planned to spend two nights in Riga but as soon as I saw the campground, I wasn’t sure any longer. It was at the fairgrounds and was really a parking lot for RVs which parked close to each other.

I arrived at noon and claimed the best tenting spot. Next to me was a tent with a motorbike. Then I immediately went into the city.

I got a first impression of the town from a large bridge. It had been fixed up a lot in recent years. 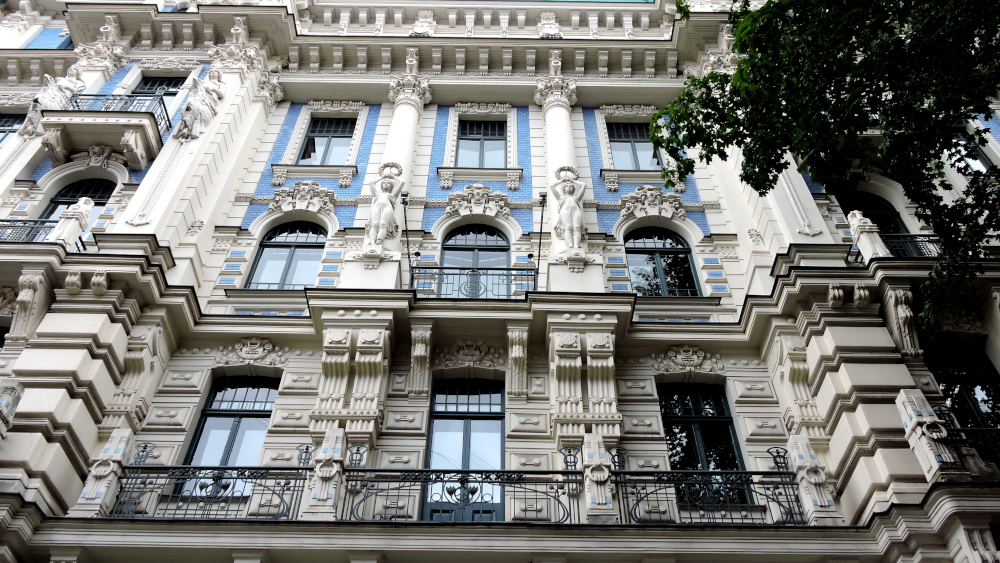 Not only in the old town. 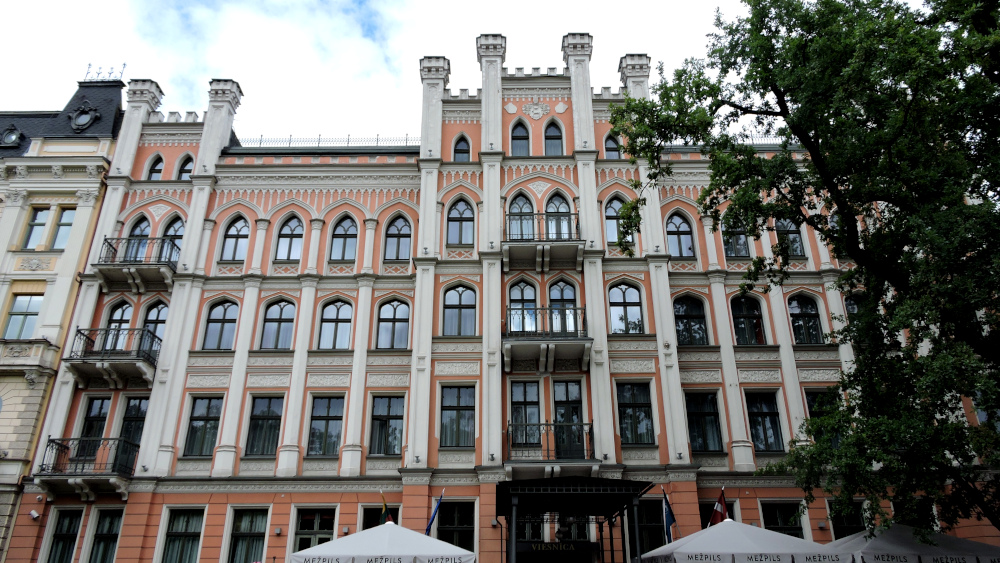 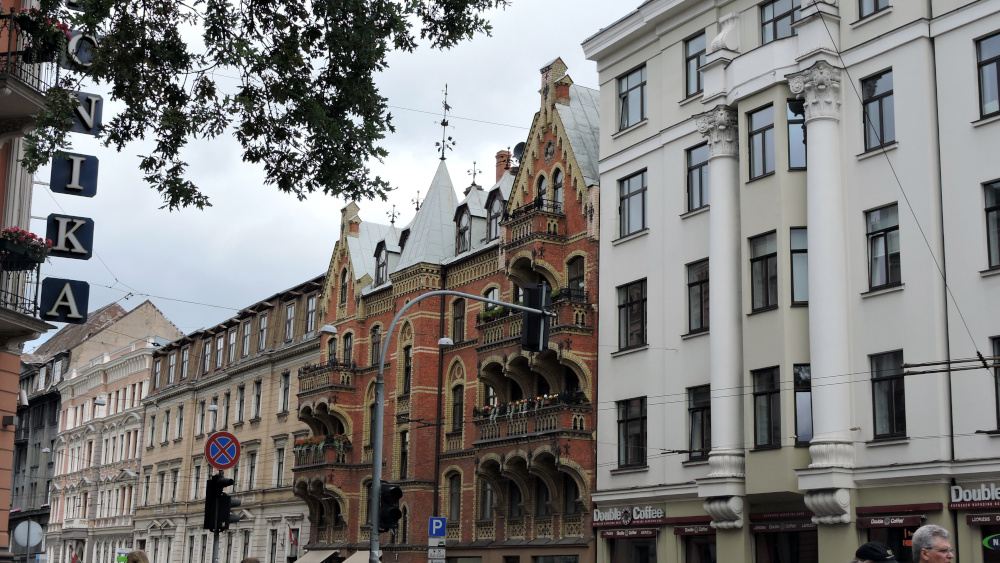 In the old town they were mixed with modern architecture. 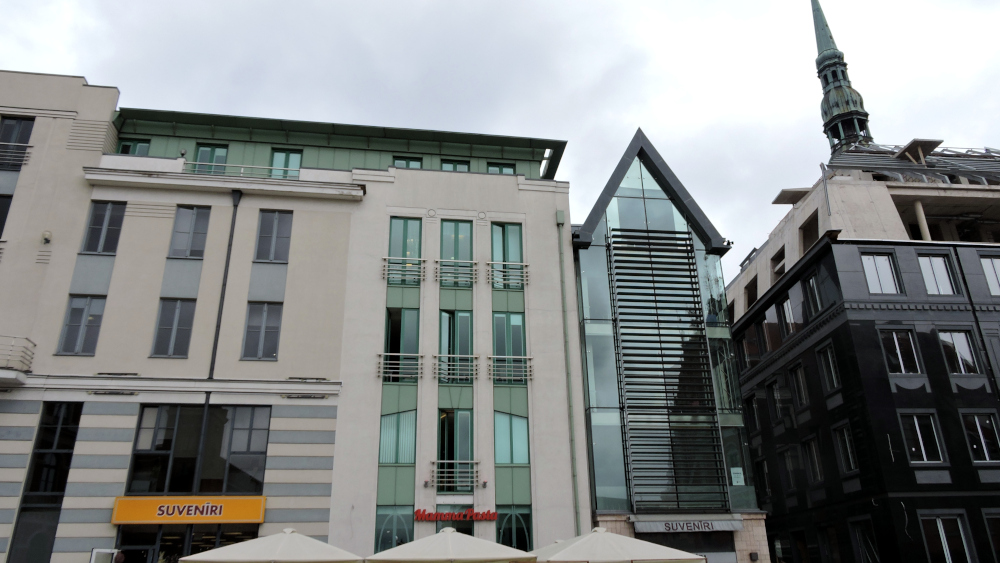 The city is a world cultural monument which made it even more attractive. 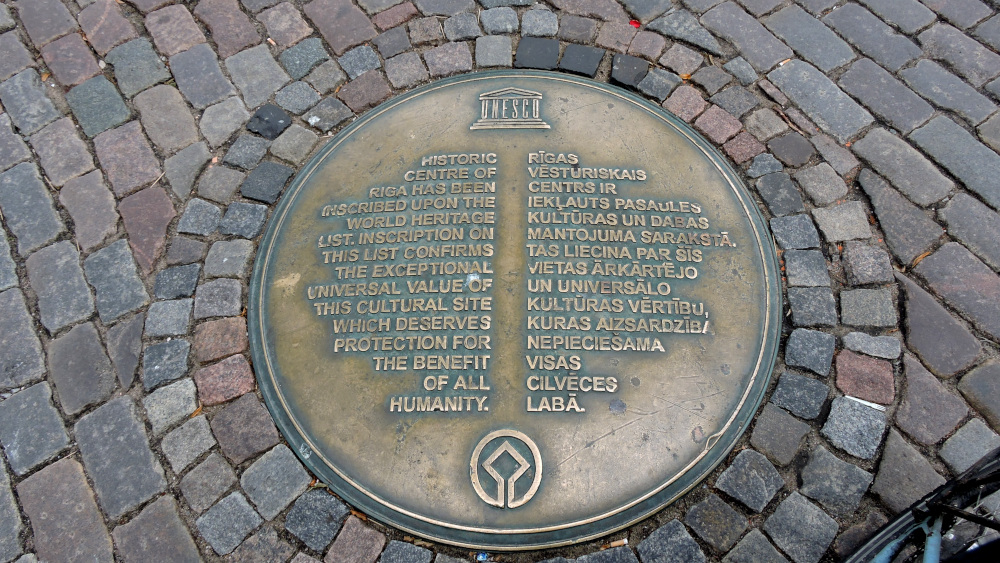 Streams of tourists were pushing through the narrow alleys, this had already been the case in Gdansk, and Tallinn might be even worse.

The afternoon had been enough for me. I continued the next day and breathed more easily when I was back in peaceful, pretty nature. 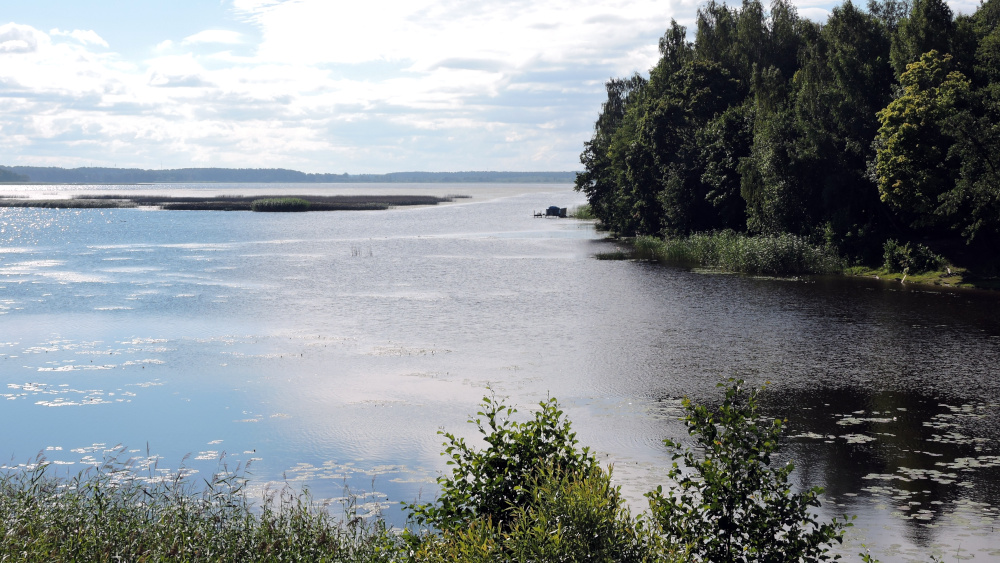 In order to avoid the A1, I took a roundabout way to Saulkrasti. 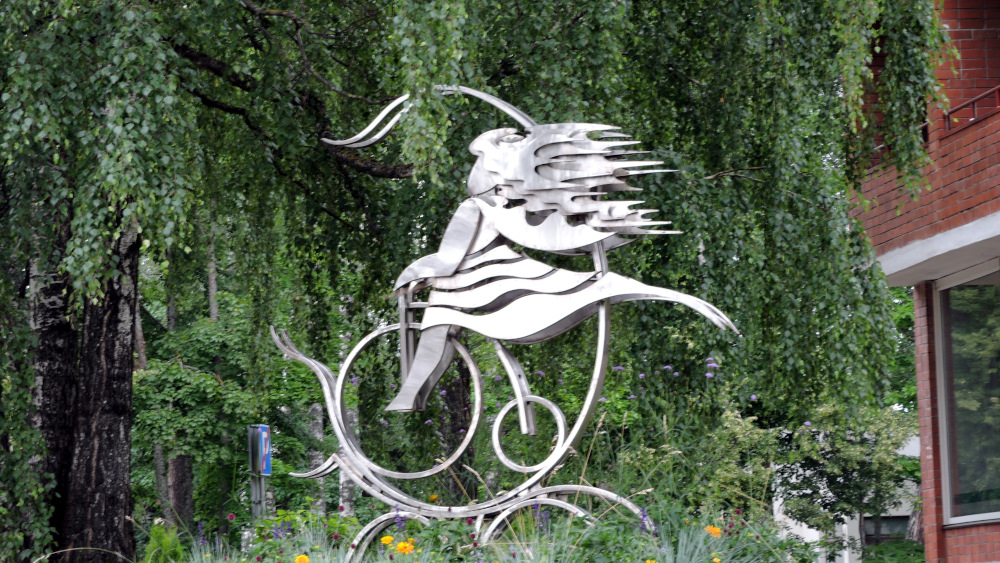 It was obvious that cycling was important here.

Then I turned to Limbazi, in the middle of the country. What a great decision! It was a wonderful small road through fields and forest.

Today I met three cyclists who had been stealth camping. After Riga I really didn’t feel like a camping site and because it remained dry, I decided to camp in nature and found a beautiful spot in the forest and away from the road.

Apparently, I had taken someone’s place. When I unzipped the inner tent in the morning, I saw that I had a logger. 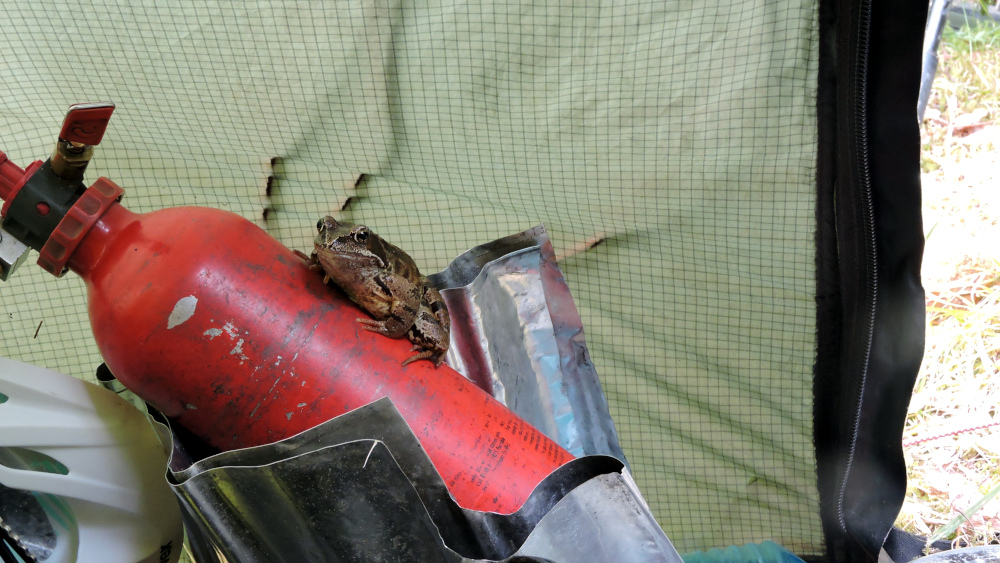 The first kilometers continued to be wonderful. 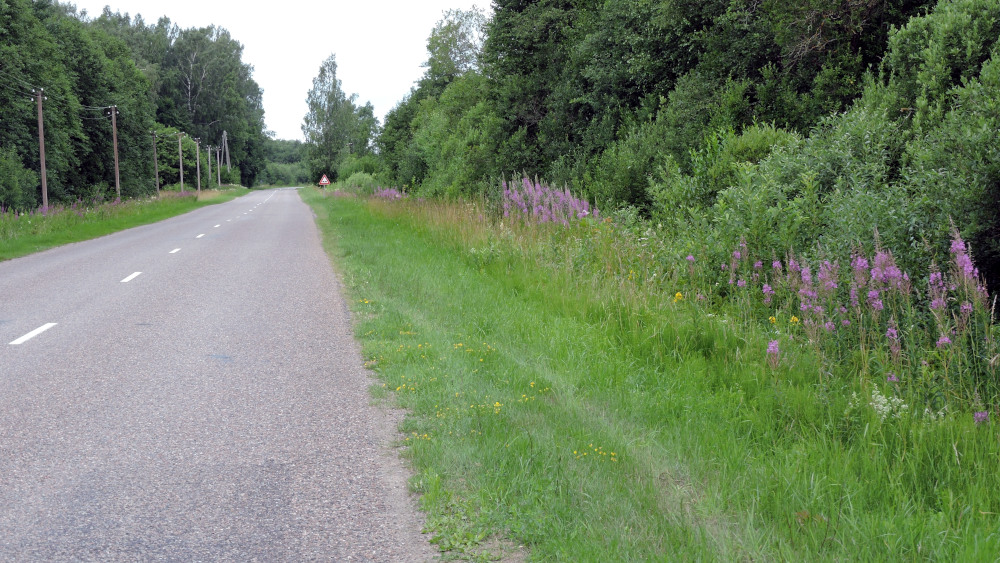 It was so quiet on the roads which were lined with flowers. The rain started when I was on the gravel road. Short but stark – both of it. I was immediately drenched and the road must have been regraveled recently. At least the combination of rain and gravel kept down the dust.

I continued on an idyllic path along the stream, 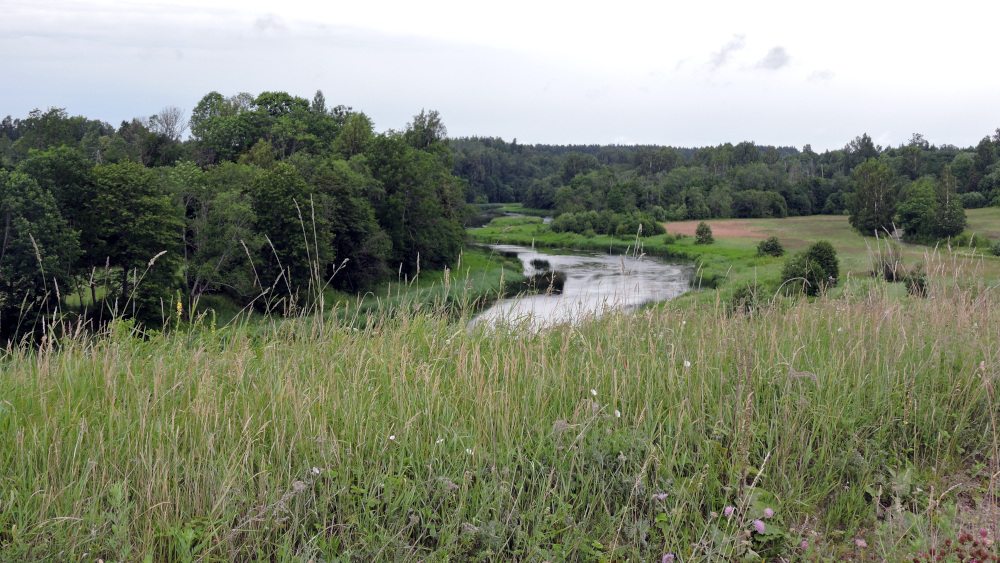 Even if there were a few ups and downs. 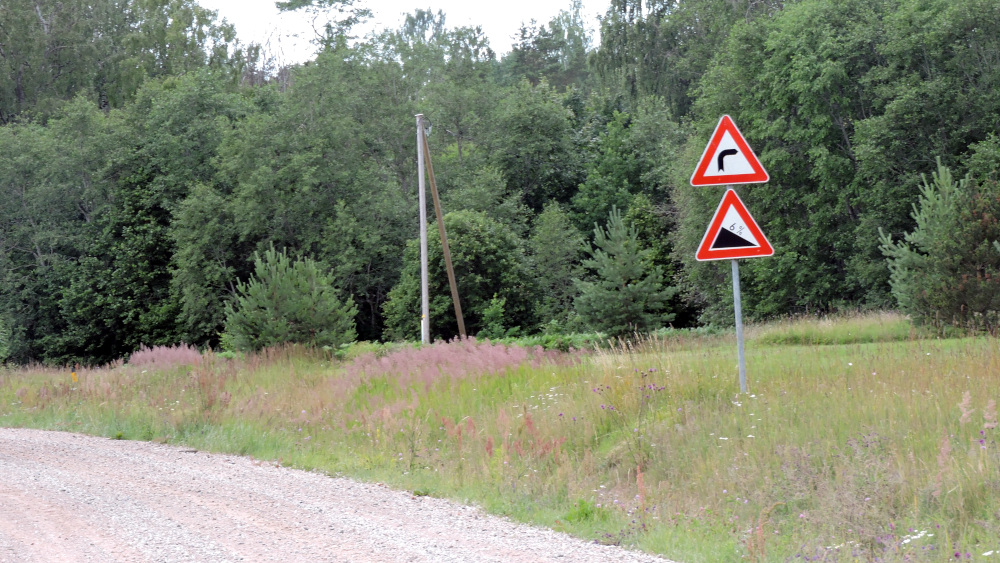 And people said it’d be flat. No need to mention that the ascents were only a few hundred meters at a time.

Once again, I was at the sea when I reached Salacriva and also met the A1 again. The remaining section to the border wasn’t too bad and there was a bike path for most of the way.

And next time: Estonia. I can already tell you: once gain very different and simply beautiful.