I had been so enamored by Poland and what came next in Lithuania?

Immediately after the country triangle of Poland, Russia (Kaliningrad) and Lithuania I turned into the forest. It was an adventurous start. 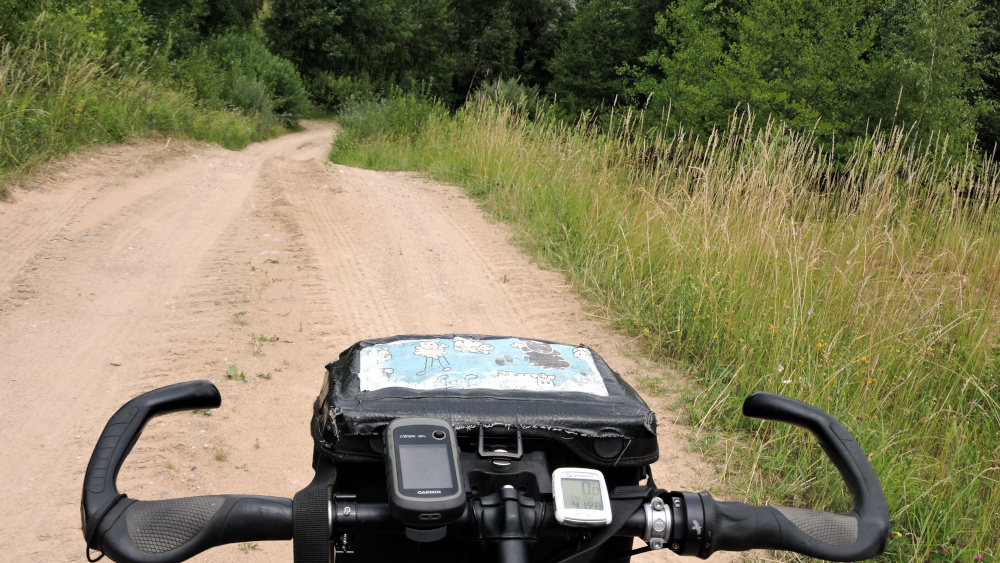 I was on a sandy forest track and for the first time on this trip it was a steep up and down. Short and sweet. Sometimes it was impossible to cycle and I had to push. But it was fun and I knew that the paved road wasn’t far off.

The road was quiet on a Sunday and then I turned onto a side road.

In Poland I had been surprised how well maintained the many gravel roads were. They were easy to ride on. Here the road was awful and totally corrugated. 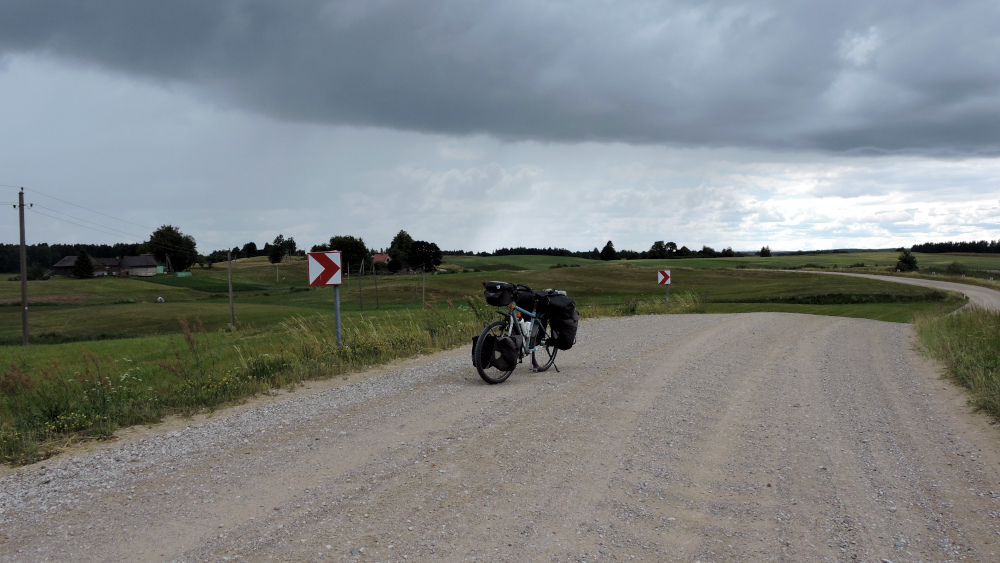 Dark clouds appeared on the horizon. Oh my, surely that wasn’t good news. The one good thing about the rain was it kept the dust down.

The weather got really bad before Vilkaviskis. I was soaked when I reached the campground which was right at the beginning of the village.

Poland had really spoiled me, not just in terms of the roads but also for the campgrounds. Here all I found was a lawn, partially submerged. There was a sink at the fence. No roof, nothing. Maybe a shower inside a trailer. The owner wanted 10 Euros (I was back in the Eurozone).

I laughed and turned around. Then the man asked for 5 Euro and I was even more incensed because it meant that he had tried to take advantage of me. I left and assumed there would be another campground at the other end of the lake.

The rain had stopped, and I could cycle easily on a track next to the lake. What I found was more an area for picnicking than camping. At least there were covered tables and it was beautiful. Anglers put their boats into the water at this spot. But I didn’t have water and I was cold!

I had to cycle back to town. And then? I remembered that today would have been my mother’s birthday and I was sure that she wouldn’t have wanted me to suffer like this. In her honor I treated myself to a hotel room. It was pure luxury and I really enjoyed my stay.

Even so it was Sunday the supermarket at the corner was open. Great, I assumed I could get beer.

I picked up a bottle and something to eat and went to the cash register. The young man smiled, not at me but at the bottle. He pointed to it and said something in his language which I didn’t understand. A saleswoman saw what was happening and immediately grabbed the bottle and put it aside. What was going on? I certainly looked over 18 years. Quickly the man explained, and the saleswoman showed me a document: on Sundays the sale of liquor was only allowed from 10 am to 3 pm. I had learnt something! They told me I could get a drink at the bar. How odd.

I had experienced a similar thing in other countries but there the alcohol had been locked up and one couldn’t take it from the shelf. And it mainly was the rule in countries which had an alcohol problem. That wasn’t the case with me. I can easily spend the evening without beer.

I also found out that Lithuania was one hour ahead and that it was already 8 pm.

I was grateful to my mother for the hotel room! It rained the whole night and continued in the morning when I went on my way. I was hopeful that it’d stop soon.

More so than in Poland, there was much resemblance with Russia, especially the old wooden houses. 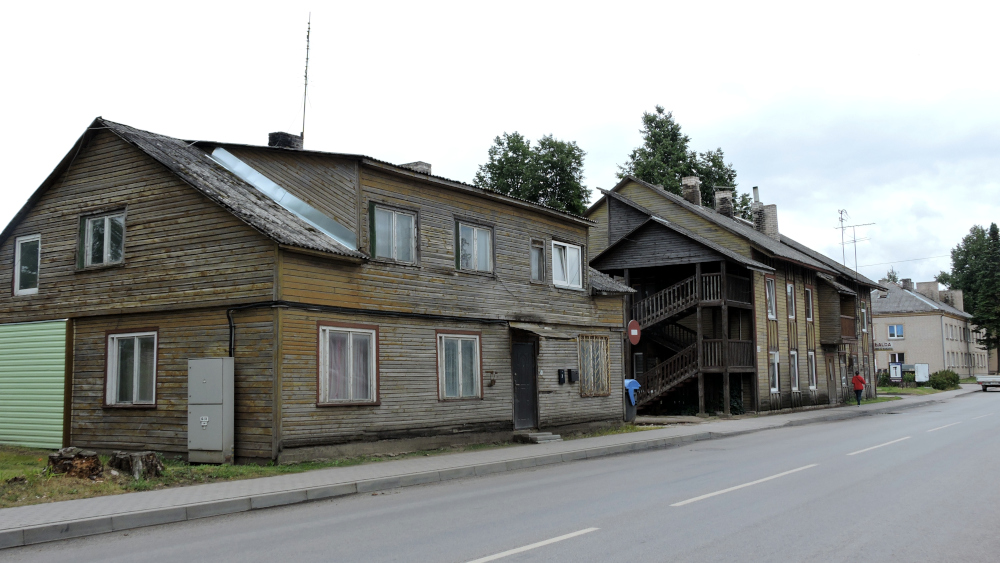 Some were totally run down. There was also pre-fabricated high rise residential buildings and orthodox churches which were remnants of the Soviet Union.

Eventually the rain stopped but traffic was horrible today. Because my experiences with gravel roads had been so bad and everything was wet, I decided to stay on the main road.

There was only one bridge at Jurbarkas to cross the Nemunas River and it meant a long detour to my campground.

There was a filling station before the bridge and the young woman spoke surprisingly good German. She occasionally went to Germany to work as a nurse for the elderly.

Traffic was fortunately better on the other side of the bridge and I had a good time cycling.

The campground was worth the detour. It was wonderful, and the owner had built it with a lot of love. Everything I wanted was there: shower, a kitchen where I could sit and cook, Wi-Fi, and even another cyclist, Jack from Holland, aged 70. We had a very enjoyable and entertaining evening and I didn’t use the Wi-Fi at all. And I got a beer.

We stayed in the kitchen until about 10 pm. We didn’t notice that it rained the whole time. When I went to my tent, the evening sky had darkened a little.

The owner convinced me that it’d be much better and prettier if I cycled backed along the river to Kleipeda. I had wanted to head straight north.

And he was right. 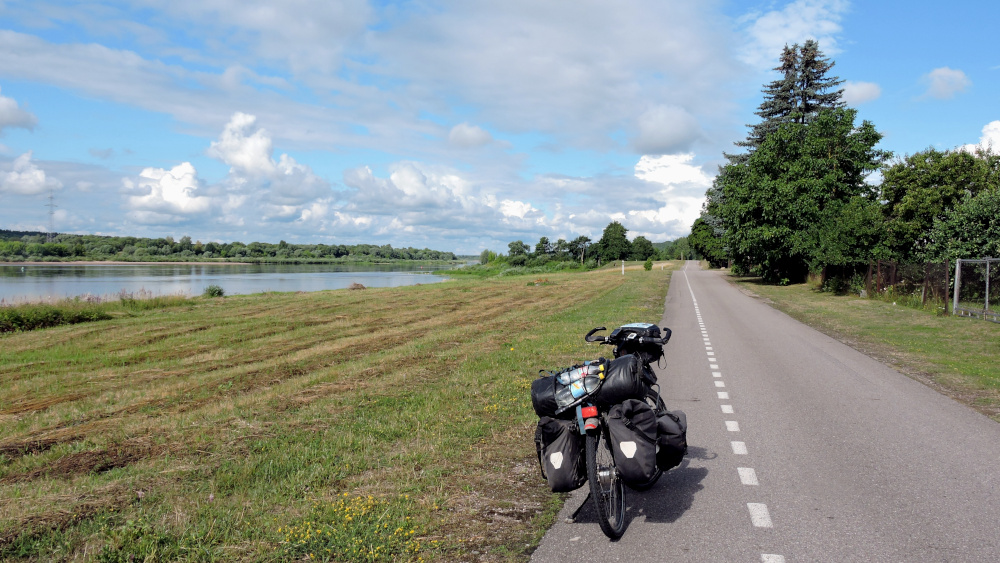 There was a great bike trail along the river which I hadn’t noticed yesterday.

The traffic wasn’t as bad as before and there were these colorful wooden houses along the way. 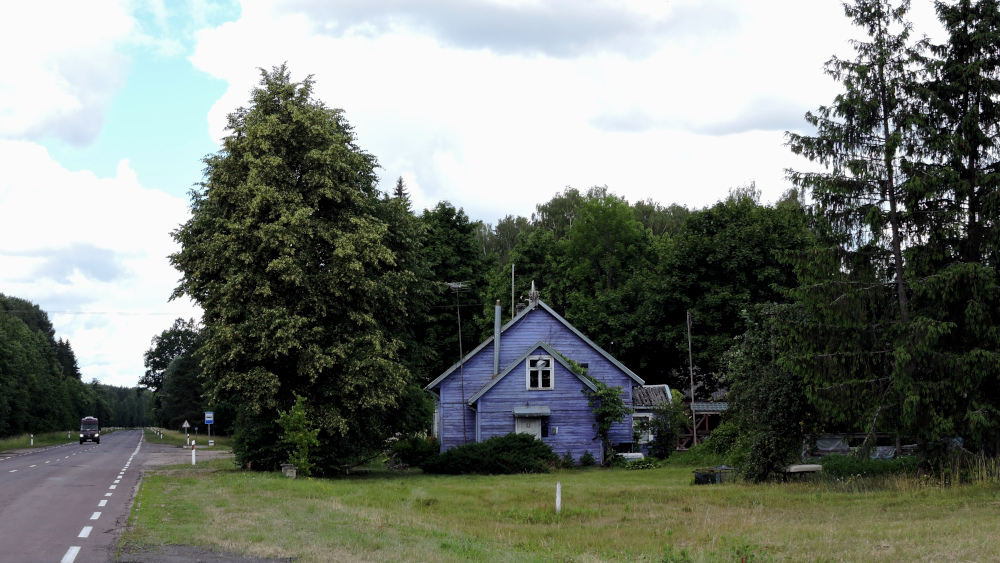 Every once in a while, the bike trail dead-ended. 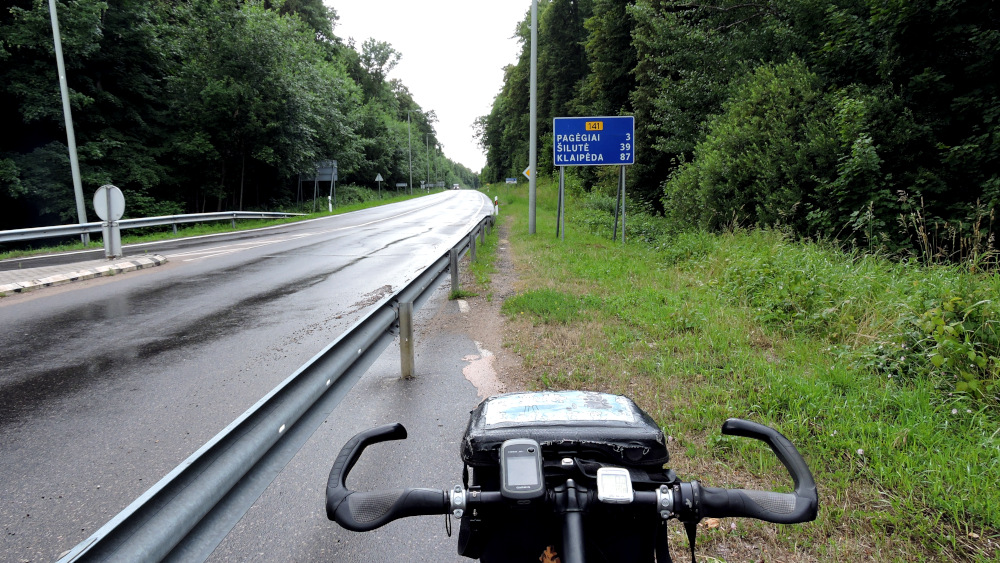 Jack thought after about 80 kilometers there would be a hotel where one could camp. On the first sign that appeared a few kilometers before the property, there was indeed a tent but not afterwards. I turned off the road and almost went into a flowerbed. The tables in the restaurant were beautifully set and had white tablecloth. That didn’t at all go with my current outfit.

With some trepidation I asked whether I could camp.

“And how much does it cost?”

I hadn’t expected that.

In the beginning it rained a bit but then I could enjoy the outdoors. 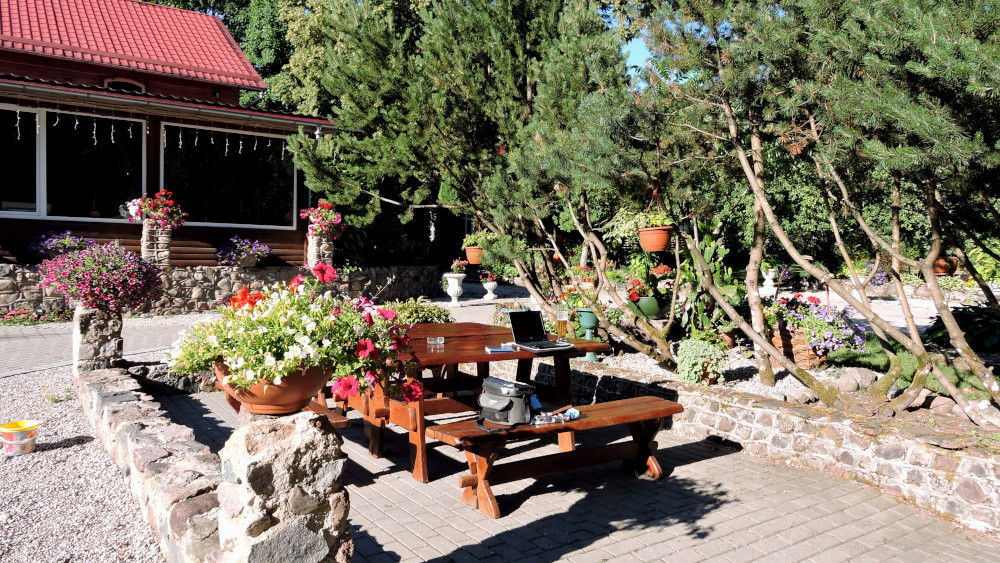 When I ordered a beer later on, they also brought the menu. I hadn’t planned on eating but when I saw the prices, I couldn’t resist. Where else could one get chicken, salad, veggies, and French Fries for 5 Euros? And of course, there was beer.

Once again I had such a good time.

Later on, I pitched my tent in a sheltered area in the back of the garden. 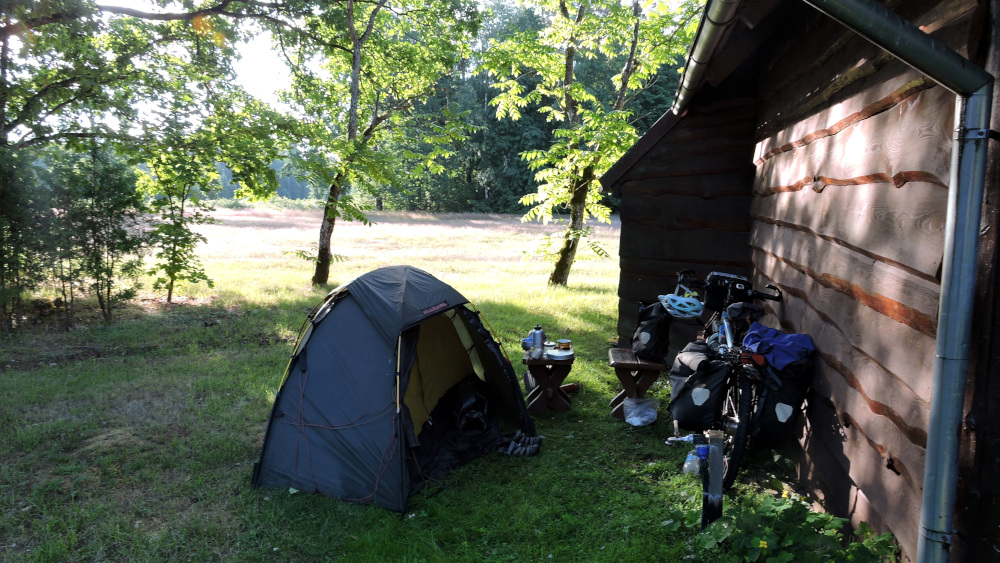 I was well rested the next day and continued on my journey.

After Siluté I cycled again on EuroVelo 10. 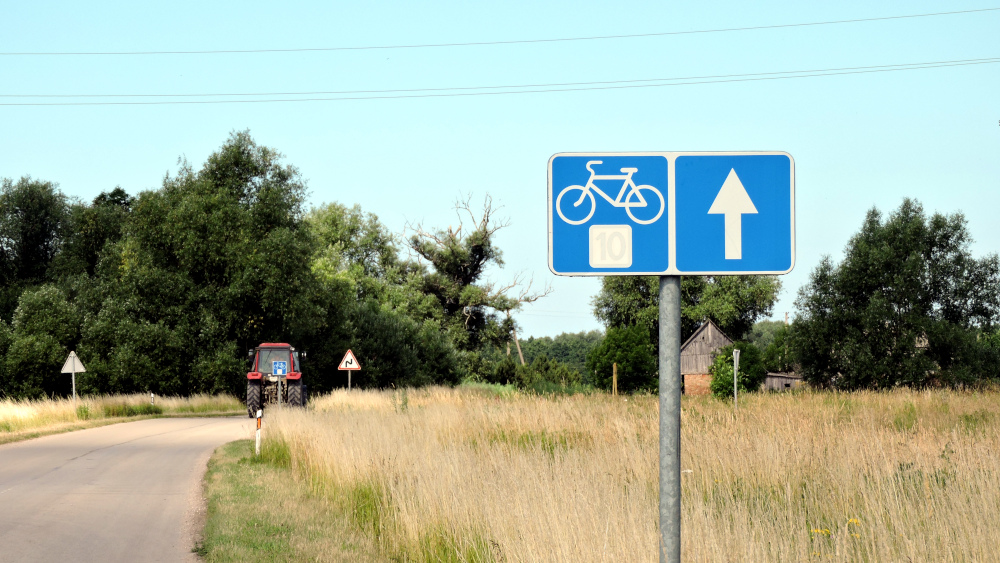 Even without the signs, the number of cyclists would have shown me the way.

There were groups which had “Baltic Biker Travels” printed on orange panniers. 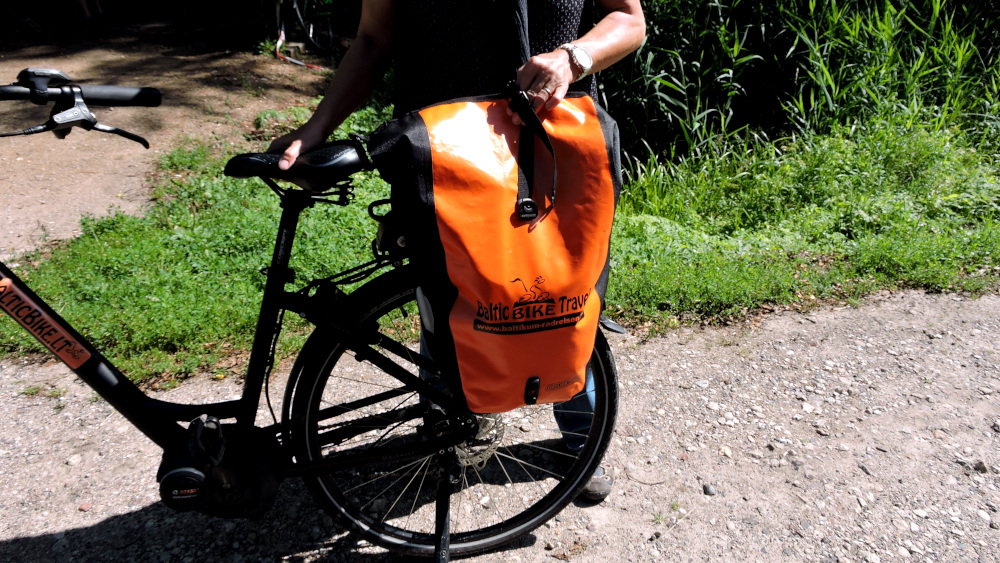 People often asked, how I could afford such long bike tours. Even in high-cost countries, like the Baltic states and staying on campgrounds, I didn’t even spend 10 percent compared to an organized tour.

Once again, the landscape became idyllic for cycling. 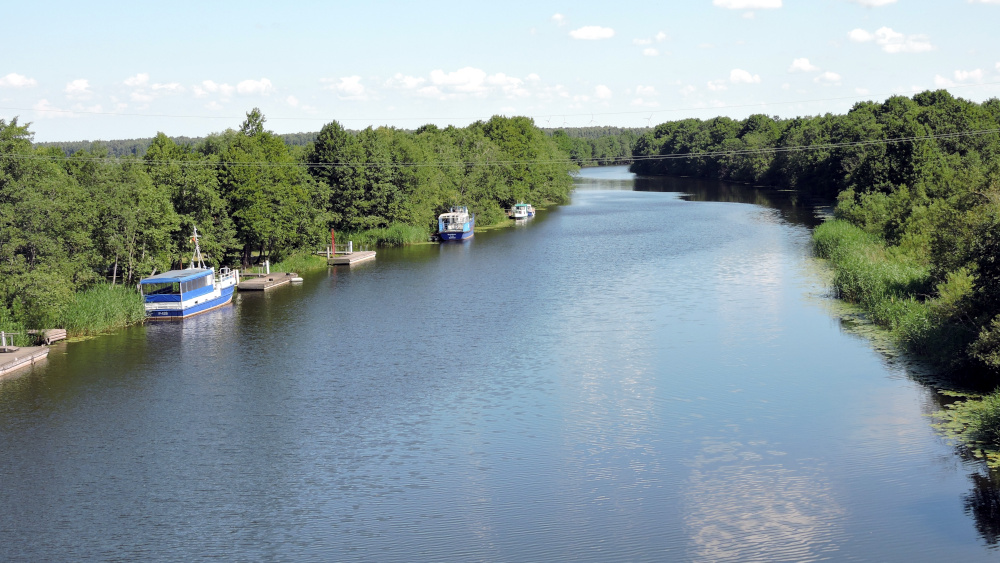 From a far distance I saw the promontory of Curonian Spit, south of Klaipeda. 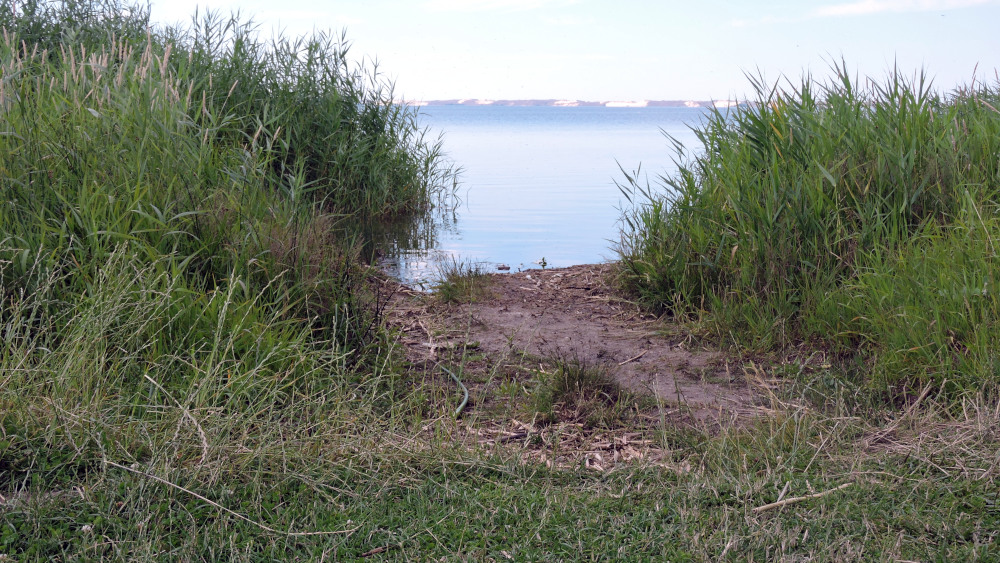 On the mainland there was a lot of investment in tourism, especially kite surfing was popular. 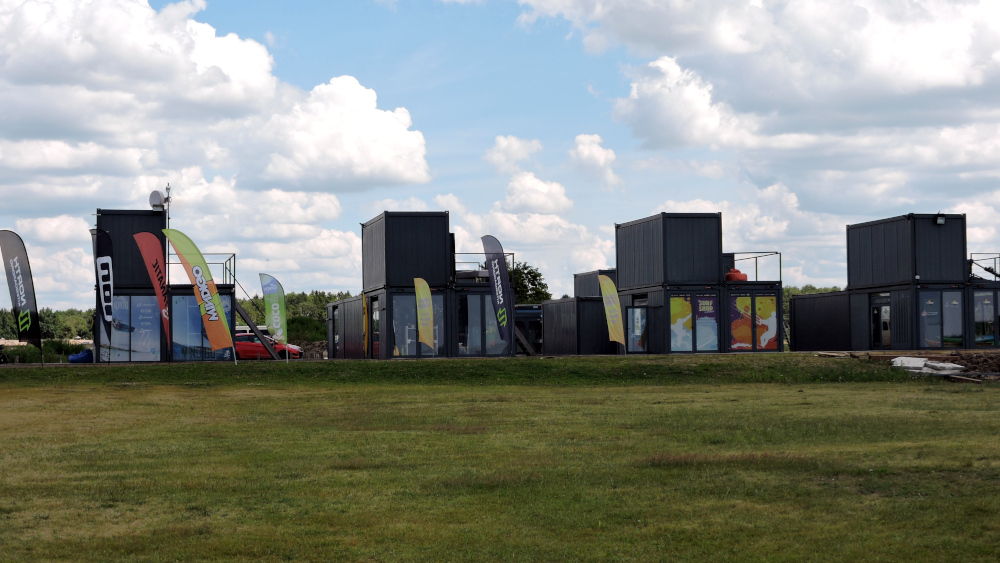 The Baltic Bikers took the ferry to the promontory and then north. I should have done the same. On this side, I had the choice between a sandy path and a busy road.

I should have known that the port city Klaipeda would be larger. But this big?

I quickly cycled through it. 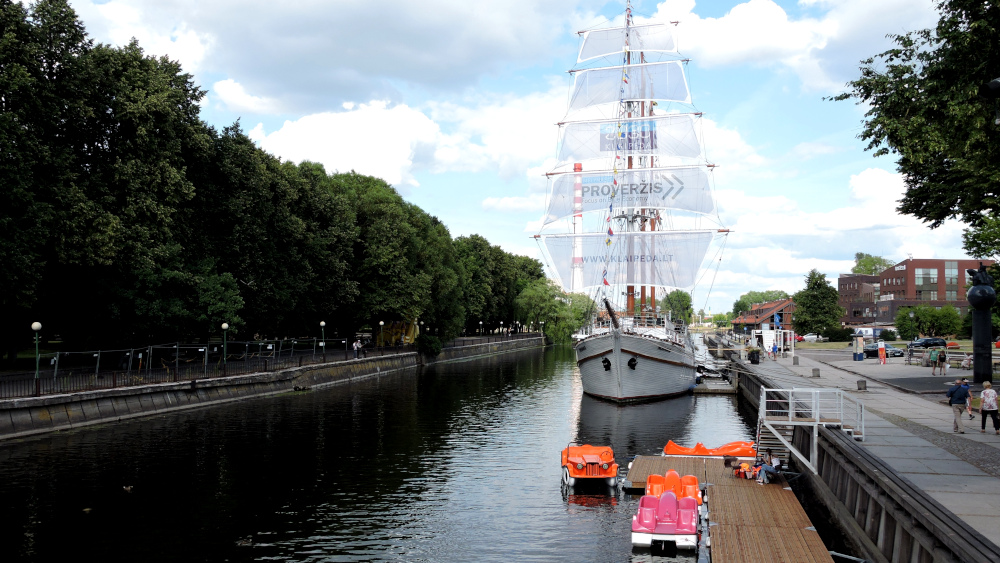 The old town was nice but even nicer was the bike path that went north. 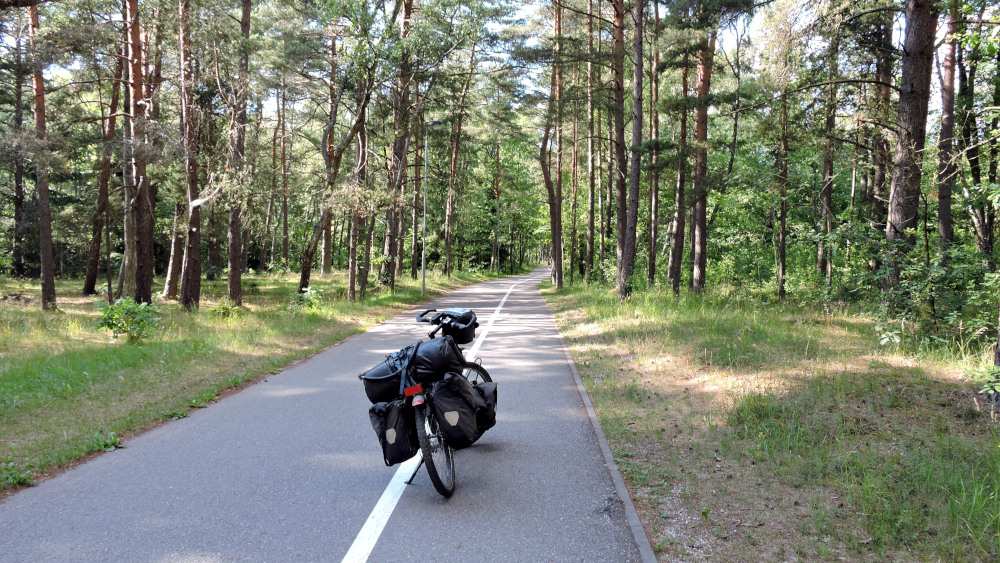 That made up for a lot.

Earlier on, I had encountered a Swiss couple and we had agreed to meet up at a campground north of the city. Before I reached it, I stopped at a kiosk and bought myself a beer.

It turned into a long evening. In addition to the beer, I had several glasses of wind. This was a good wine and I hadn’t had any on this trip.

I went to my tent just before midnight and I heard something big and heavy drop. I wondered what it could have been but didn’t think much about it.

In the tent I wanted to put the address of Marlis and Johan in my notebook. But it wasn’t there. And my wallet and smart phone also had disappeared. Damn! What to do?

I quickly went outside and looked around. Fortunately, everything was scattered in front of the tent. Only a few Euros had been taken and the thief hadn’t been interested in Polish Slotis.

I must have surprised him, when I went to the tent. And the noise I had heard must have been when he jumped across the fence.

The thief knew exactly where my wallet was, and I assumed that he saw me when I bought beer at the kiosk.

It was the first time ever that something had been stolen from me and it could have been a lot worse. I had learnt my lesson. Since then I almost always take my purse with me.

I didn’t want to let this incidence spoil my trip. I stayed another night and enjoyed the beautiful beach. 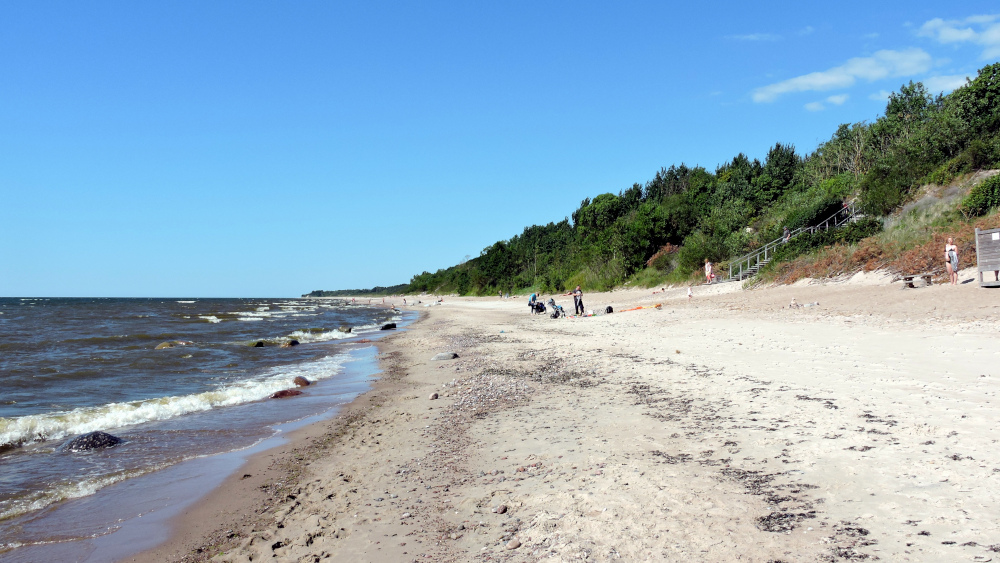 The great bike path continued through the forest until shortly before the border with Latvia. 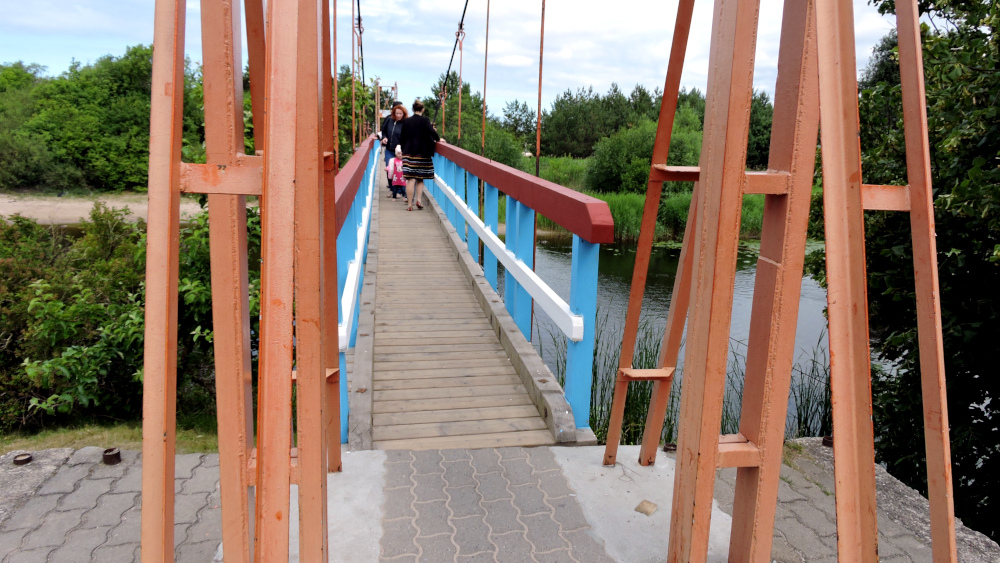 In my next blog you can read more about the second Baltic country. 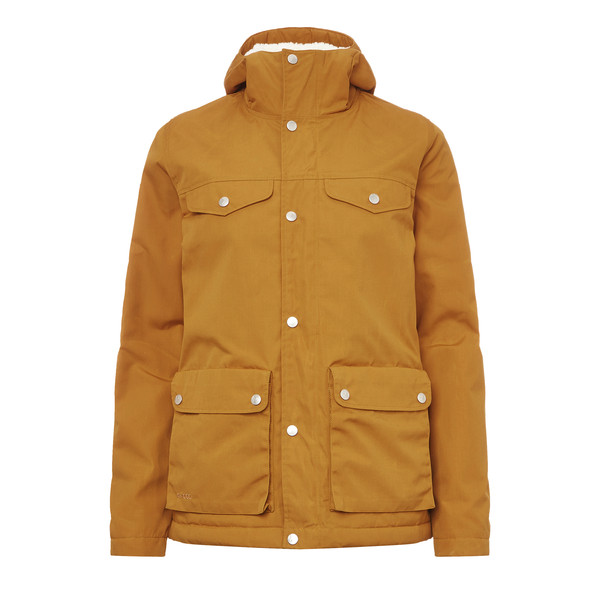