How did I enjoy the country which many had advised against visiting? They had warned against cholera, civil war, a collapsed dam and flooding on the Zambezi.

I didn’t go to Mozambique with my eyes closed and hoping for the best. I got information from people who lived in Mozambique and all the feedback was positive. And I went on my way….

Swaziland had me climbing and in Mozambique I went downhill. 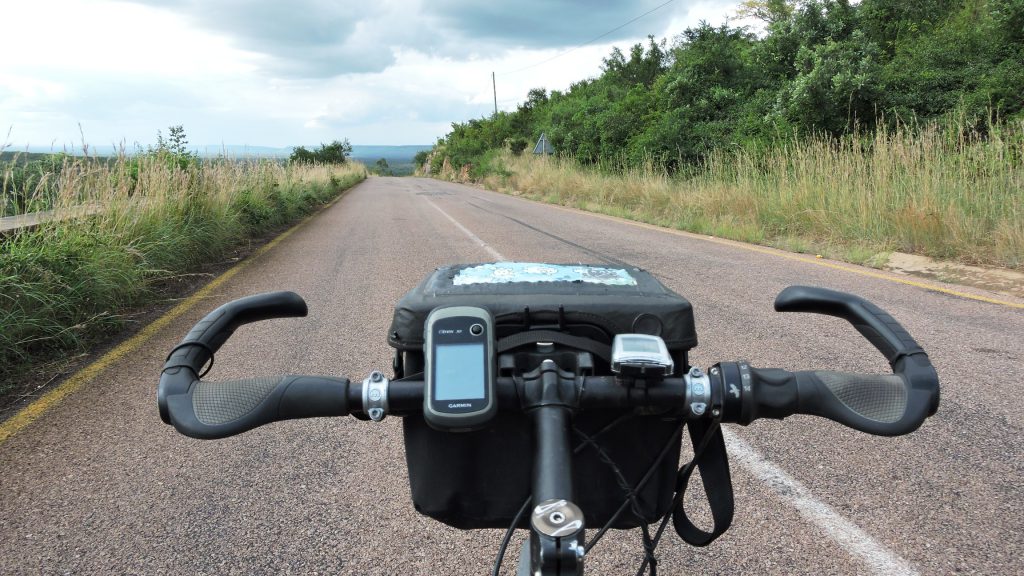 I longed for the ocean and Maputo, the capital, was directly on the water. 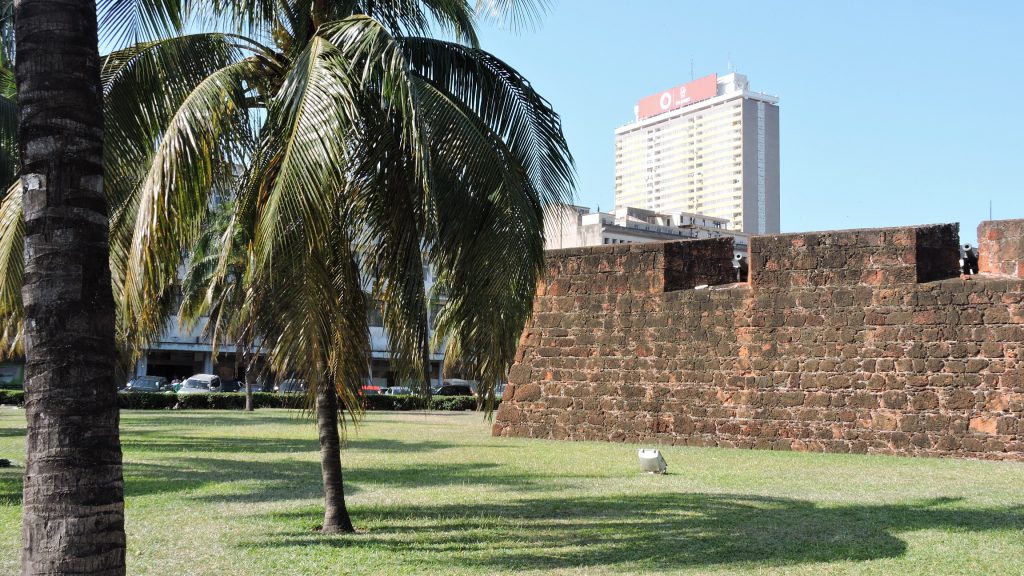 The Portuguese had built this port city and it had seen better days. This can easily be seen at the old castle and the once-splendid railway station.

One of my main concerns was once again a visa. I had heard that one could get a visa for Malawi at the border, but I had learnt my lesson (visa for Mali) and didn’t want to take a chance. The price was higher in the embassy (USD 100) than at the border (USD 75) but I prefer to get the visa here.

I was greeted very nicely. 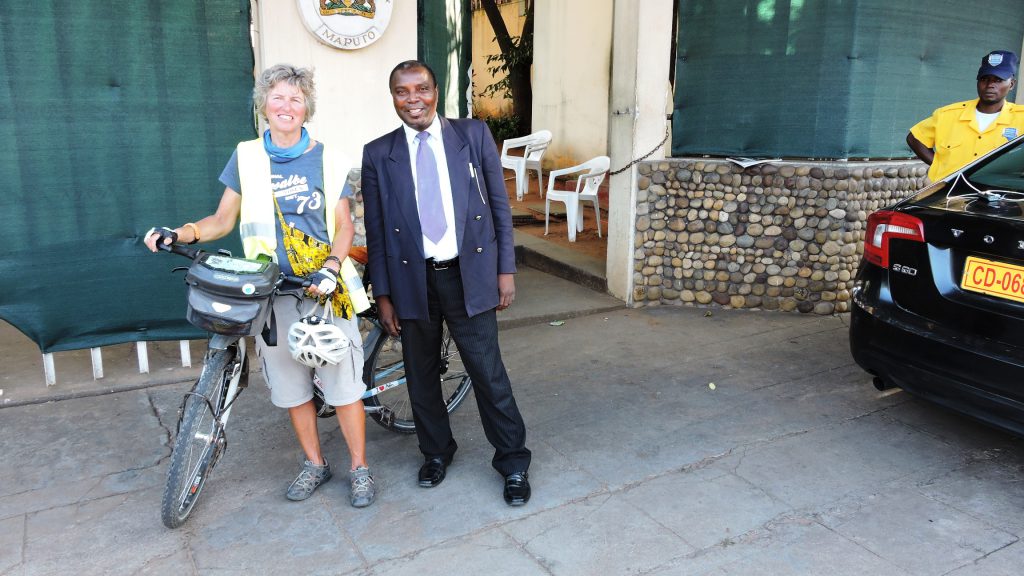 The men immediately recognized me. We had passed the border from Swaziland at the same time and they were happy that I had made it to Maputo. A few hours later I had the visa.

The city was quite clean but I noticed right away that I was in Africa. 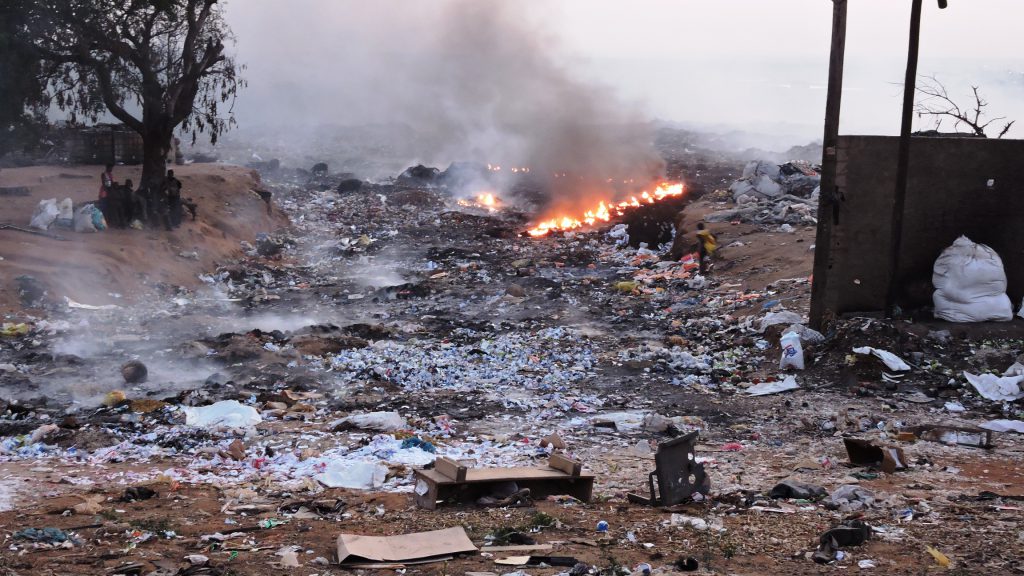 Once I had the visa, I could leave the city, but I didn’t get far. The was a heavy downpour which stopped me. Fortunately, I was warmly welcomed at an orphanage where I could spend the night. 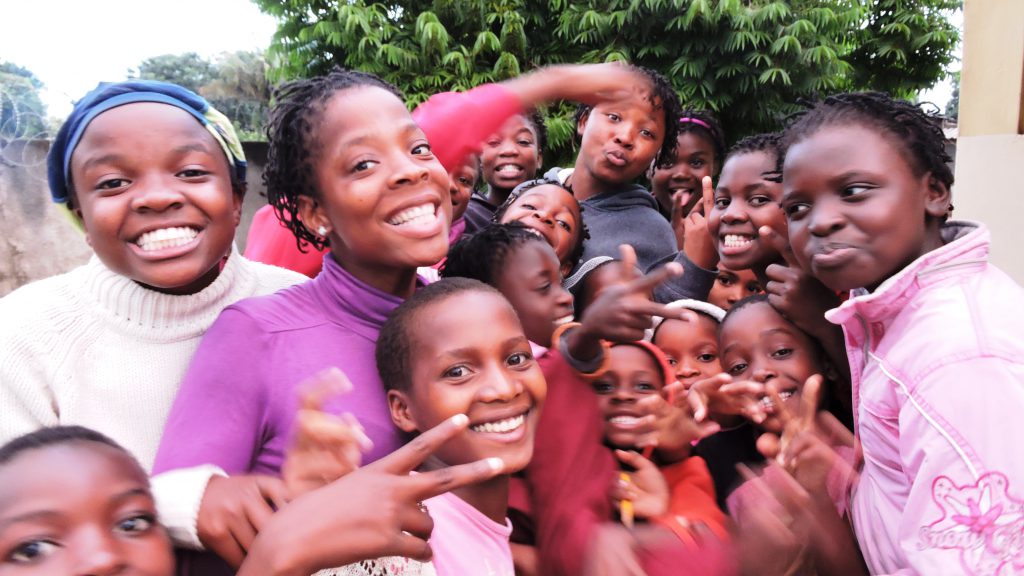 Never before had I experience such a heavy thunderstorm so early in the morning.

The rain accompanied me for a few days. It was so heavy that the roads were soaked, and some cars got stuck. I managed to get through, but it was very unpleasant.

The first days in Mozambique were hard. In addition to the rain, I had a lot of flat tires because of the thorns which I had picked up in Swaziland. Despite predictions, Mozambique wasn’t flat, and I had headwinds.

Things turned for the better after Helene. Finally, I had managed to extract the last thorn, the tire remained inflated, and the rain stopped.

The hills felt easier when I had such nice views. 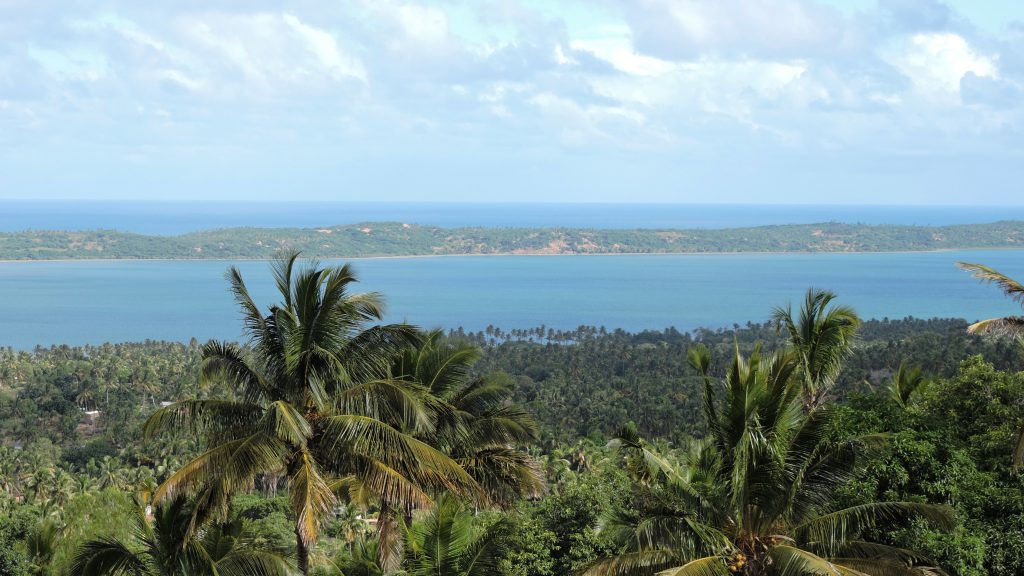 In Maxixe there was a wonderful campground on a bay. I witnessed a wonderful sunset. What more does one need? 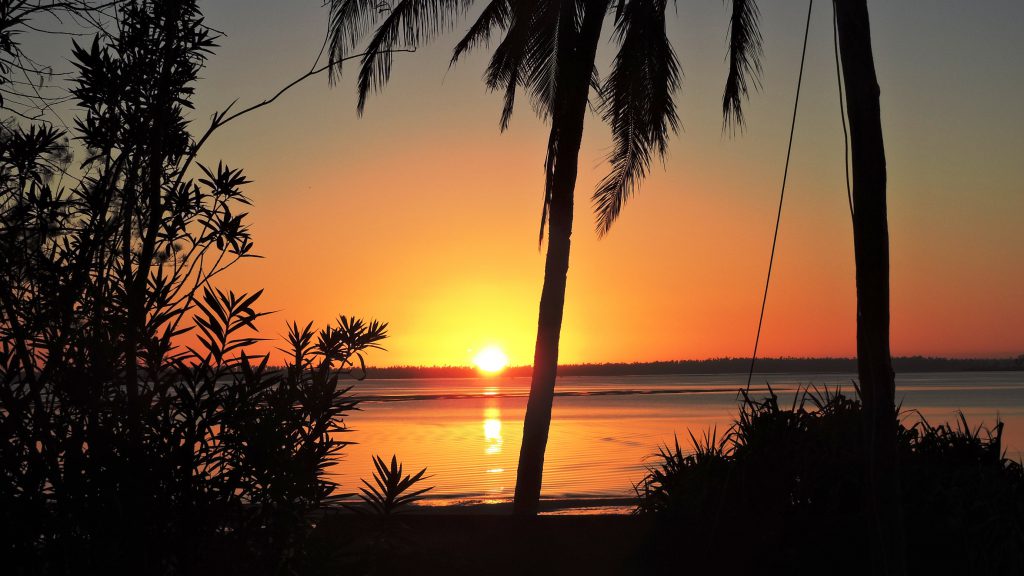 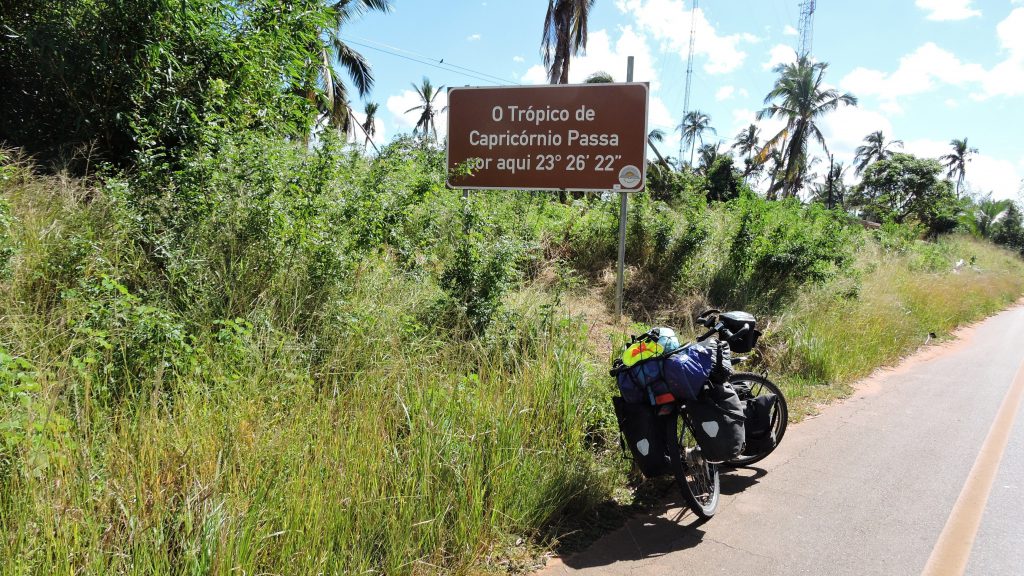 Schools are always a good point to camp. 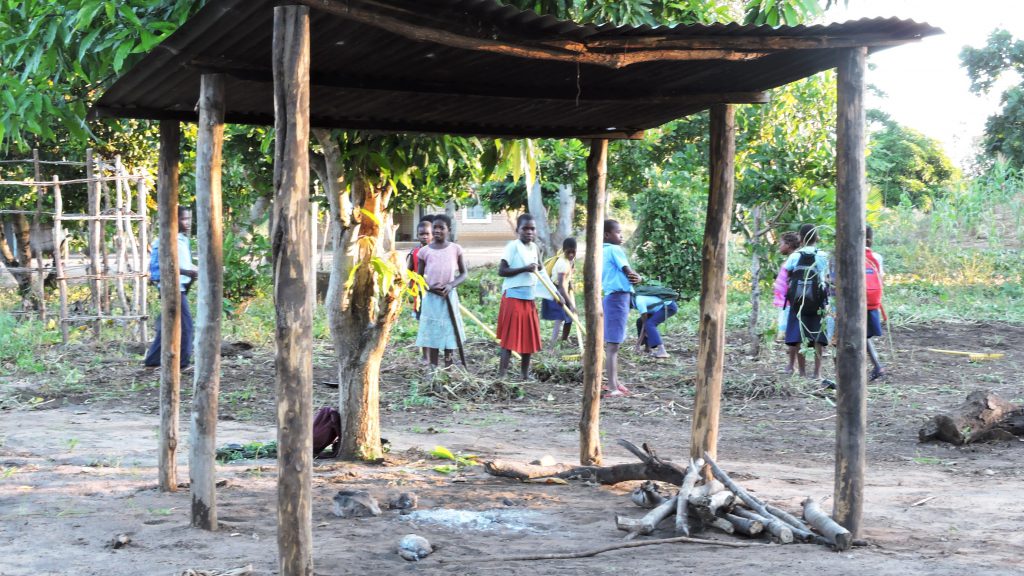 The teachers had built their huts around the school and I could camp amongst them.

In between was the school garden where everyone worked after class.

All roads which left the RN1 where sandy tracks and only useful for cattle. After Angola I had a sand phobia and didn’t turn. After Inhassoro there was a nicely paved road which wasn’t too long. 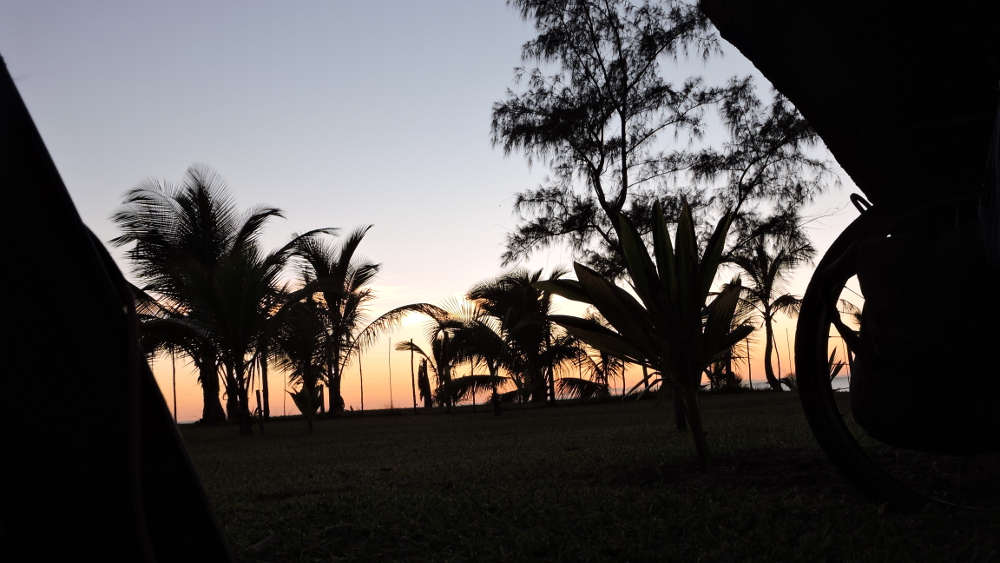 Finally, I got back to the ocean. For three kilometers I had to make it through the sand, but it wasn’t too bad and absolutely worth it. 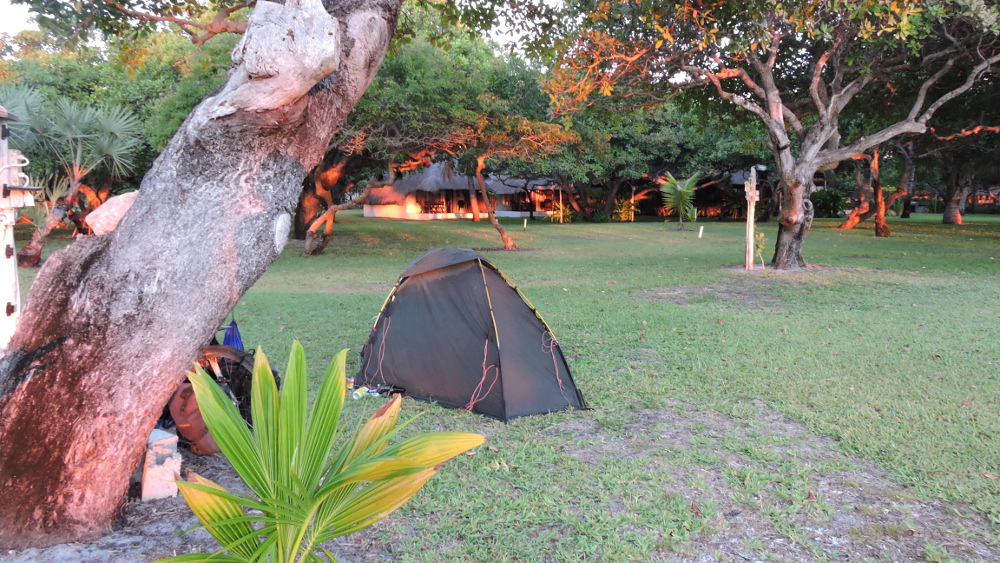 A spectacular camping site. Goody Villas. Very quiet, not expensive, and directly on the water. 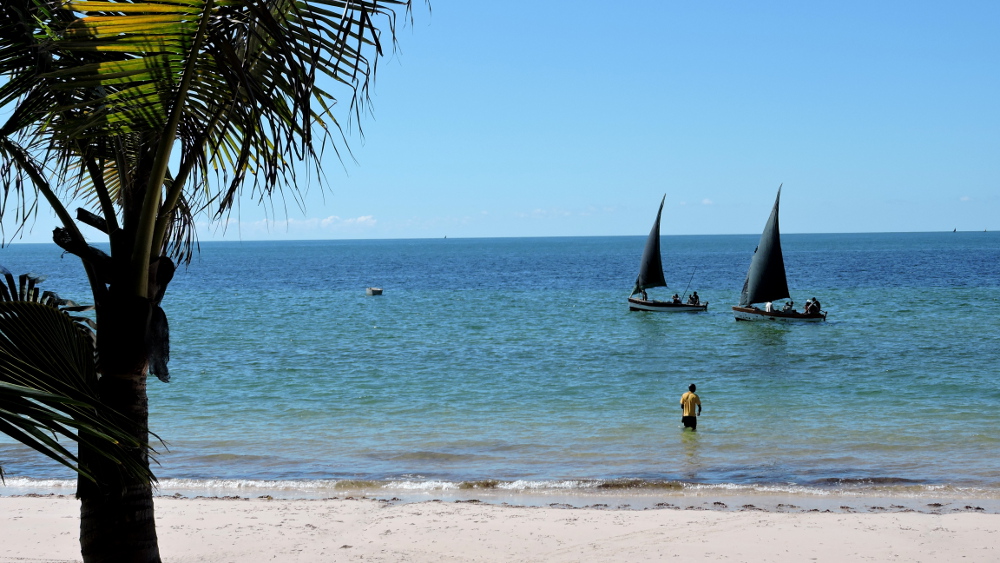 I enjoyed it for a few days. 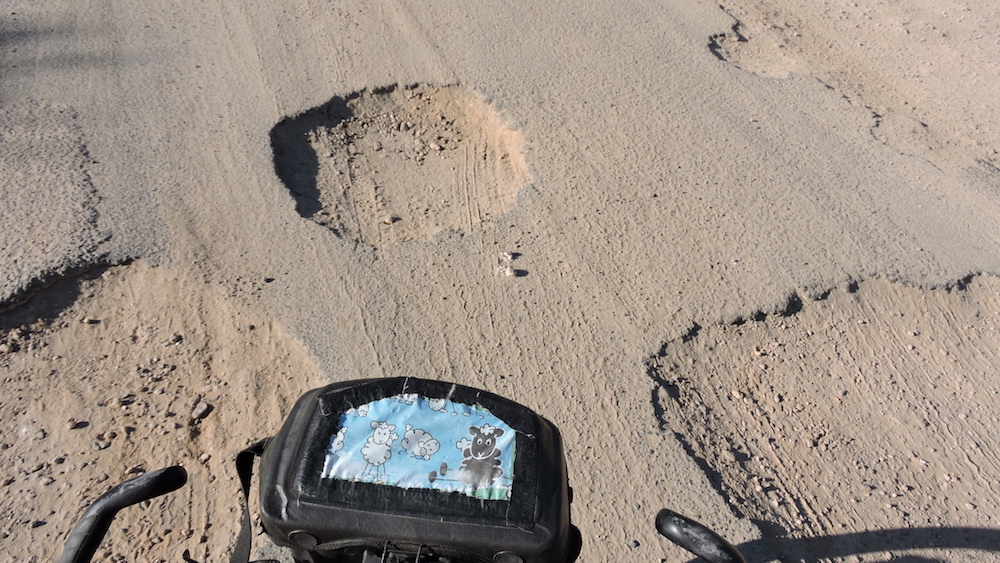 The road north more and more resembled Swiss cheese, completely potholed.  On a bike it was easy to avoid the potholes and I had time to watch how the trucks slowly navigated around them. Sometimes I was faster.

When I saw all the people breaking rocks, I realized how poor the country was. Men, women, and children sat by the roadside where they broke rocks and sold them. Unbelievable. On the roads, the South Africans sped by in their large cars, often pulling boats. For them Mozambique is an affordable party destination with its gorgeous beaches. They weren’t much loved in the country. When I told the people that I was German, I was much better treated.

I was looking for a place to camp when I passed a transmission tower of one of the three mobile phone companies. Next to it lived a young man in a hut which was so small that I could believe that he could stretch out in it. 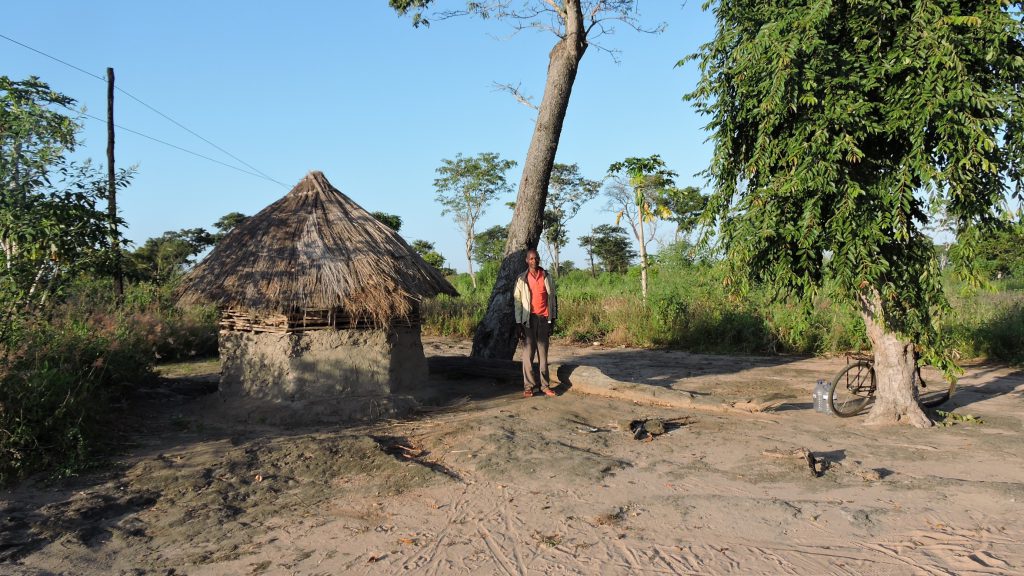 Further north, it got hillier. I had to cycle around Gorongosa Mountain 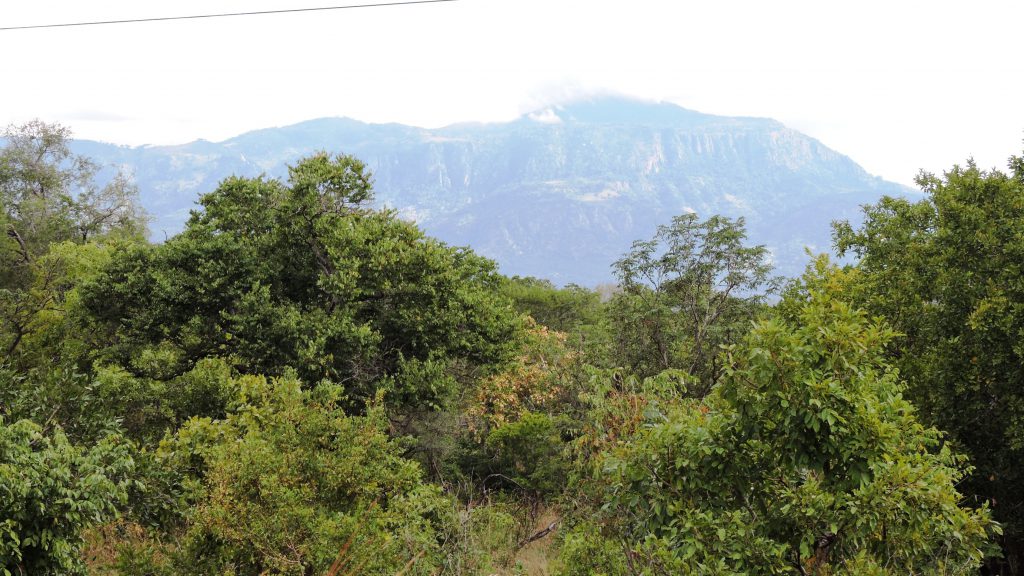 Population density was quite low. In the evening, I followed a boy who turned off the road into the bushes. There was a small village with a school 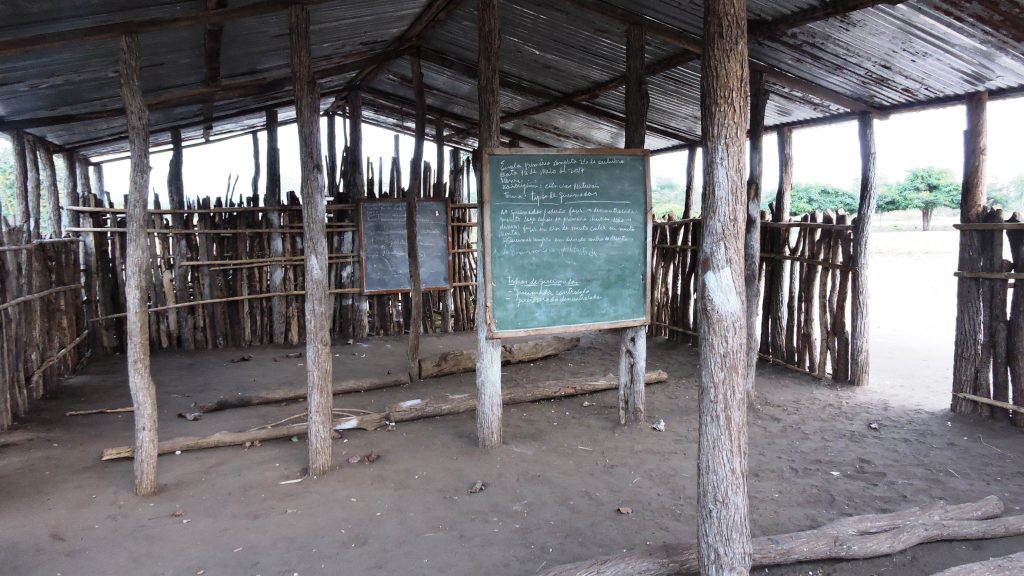 A female teacher lived in a hut right next to the school and allowed me to camp inside. I had seen a lot of schools but never anything like this.

The classrooms were divided by the black board. There were no desks and a tree trunk served as chairs. A corrugated sheet as a roof. When it rained hard, it was impossible to understand one’s own word. Hard to believe that the kids could learn in such an environment.

By now my sand phobia had lessened and I took a path in front of the Zambezi River.

Along the river more people lived. 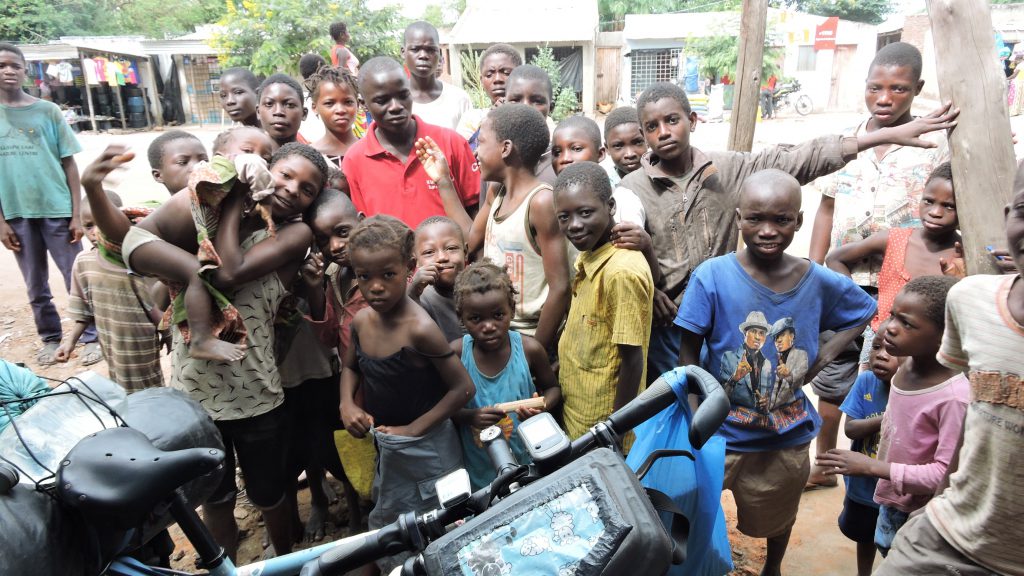 A lot of food grew, and I was able to buy the best and cheapest bananas and oranges.

There wasn’t much else to buy, and certainly no spare parts for bikes. 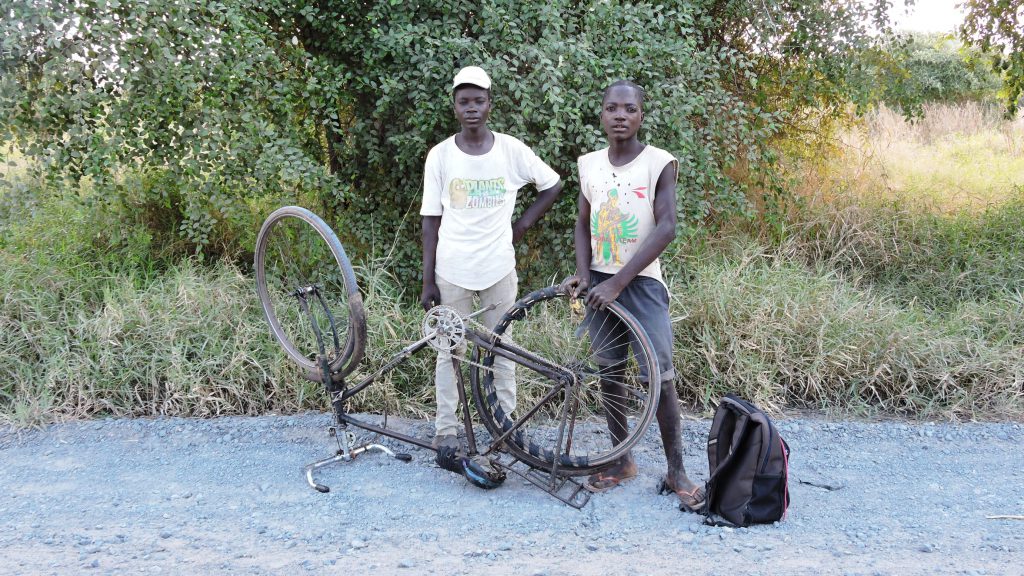 Sometimes the Africans have a lot of imagination.

The last day in Mozambique was amazing. The sandy road was much easier to ride on than expected. I enjoyed calling out the local “Bom Dia, Bom Diaaaa”. Portuguese is the official language in Mozambique but not widely spoken in the rural areas.

In Sena, I stood in front of the seven-kilometer-long Dona Ana Bridge which crossed the Zambezi River. It was early in the morning and I immediately crossed it. 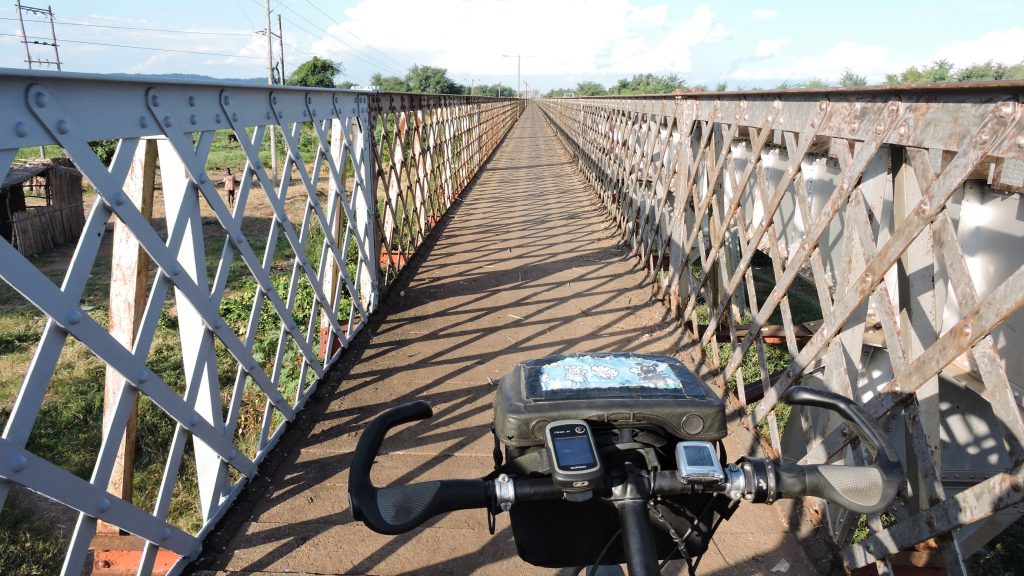 It was a railway bridge with a narrow path for pedestrians and cyclists. 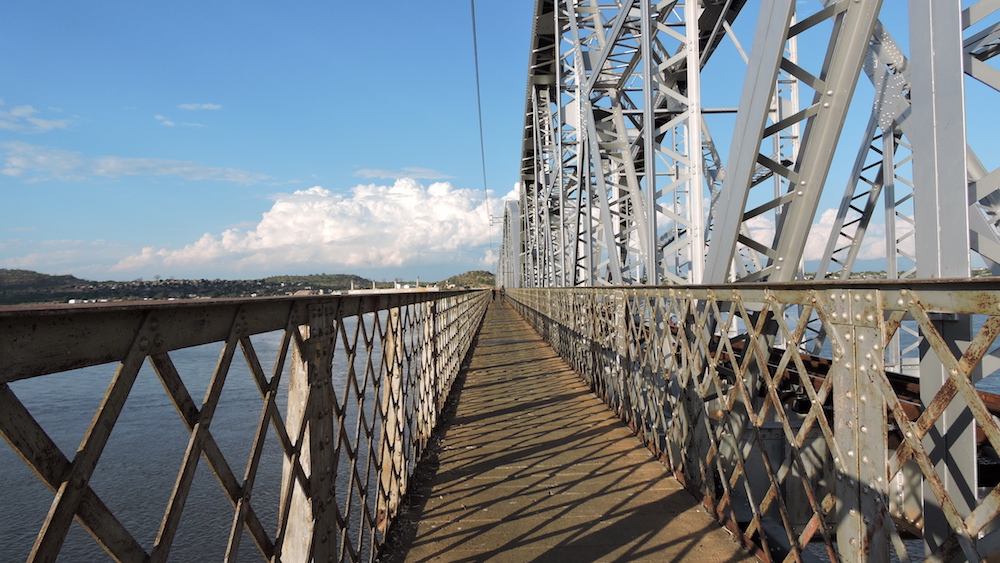 Of course, this didn’t stop scooters from crossing. At the steps there were men who helped to carry the scooters up and down. And they were helpful for me as well. 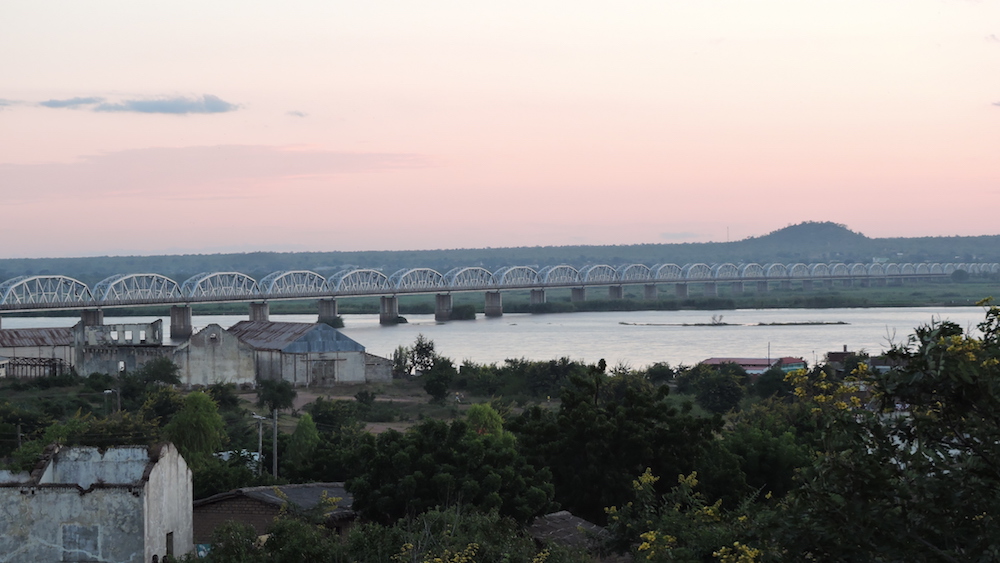 And from the police station where I could camp and from where I was a beautiful sunset over the Zambezi. 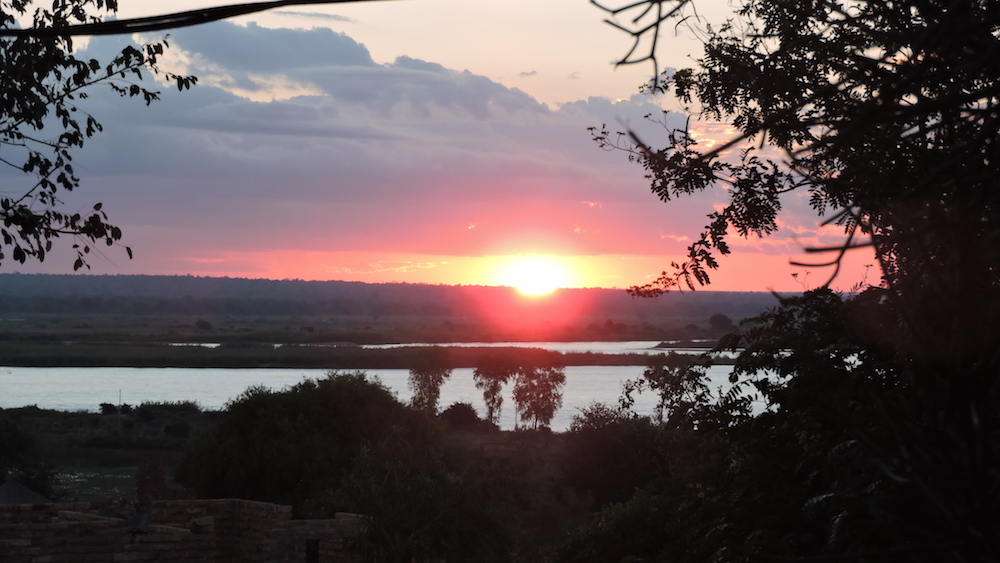 By now I had crossed it three times. The first time in Kanu in Angola, the second time across the Victoria Falls Bridge between Zambia and Zimbabwe, and now for the third time.

The river is 2,574 kilometers long and not far from here its long journey ends in the Indian Ocean.

I continued my trip. There was no bridge for cars and it was very quiet between Mutarara and the border with Malawi which was 40 kilometers away 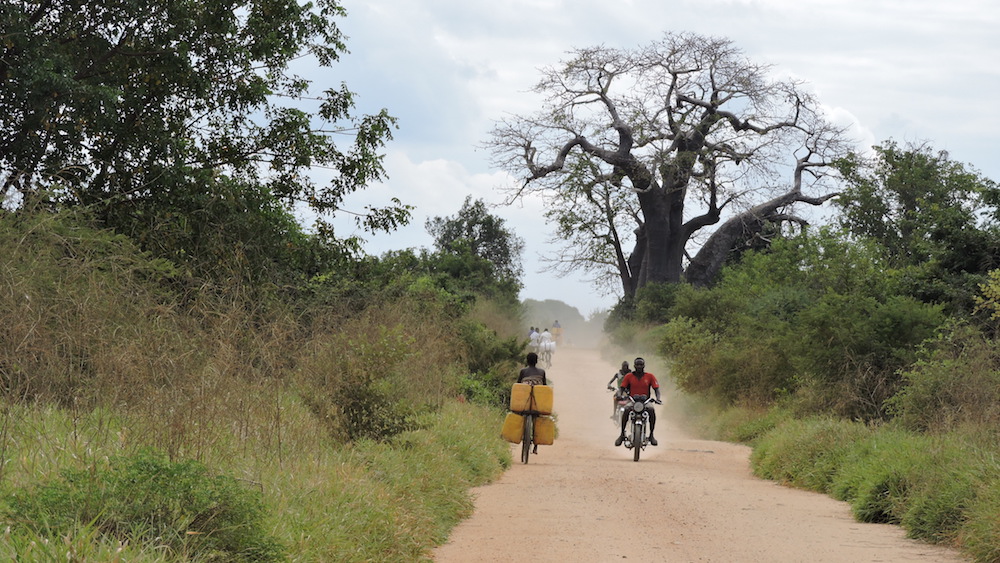 At least no cars.

I was in Mozambique for three weeks and cycled 1,738 kilometers.

Despite all warnings, I had a great time. The policemen had treated this German cyclist very well.

Maybe I had been there during a lucky time. There had been some civil unrest and in February there had been storms and flooding. Now it was quiet and everyone in Mozambique was happy that it was peaceful.

For now, I can recommend the place for cycling.

Now Malawi awaited me and more about it in my next blog.