I had spent ten days in Lesotho, another kind of Africa, and before entering Swaziland, I returned to South Africa.

Immediately after the border with Lesotho, was the Camel Rock campground 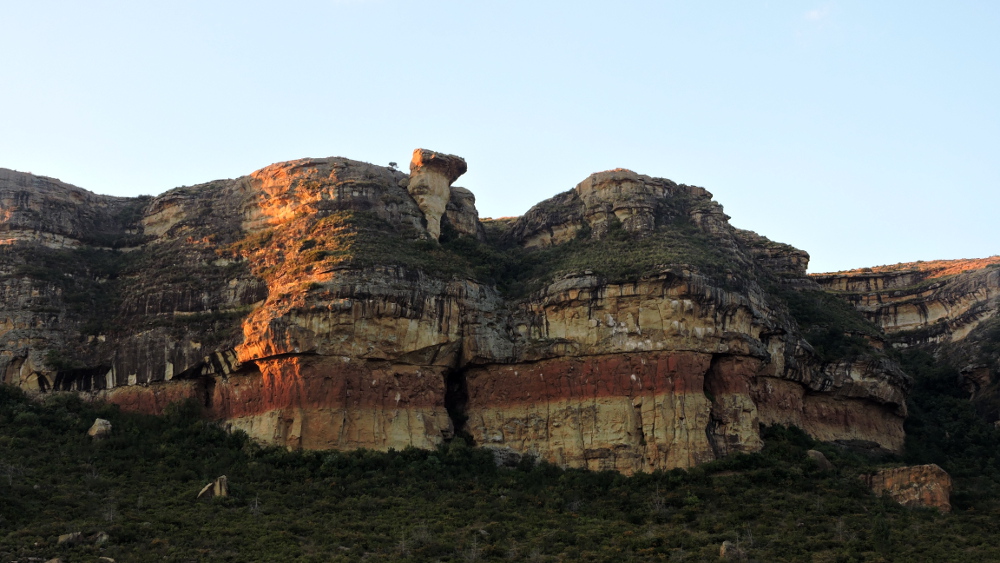 which was surrounded by mountains. It was beautiful! That was one of South Africa’s advantages. Another one: the owner took one look at me and the bike and decided that I could camp for free.

First, I was alone but then an Australian couple arrived. 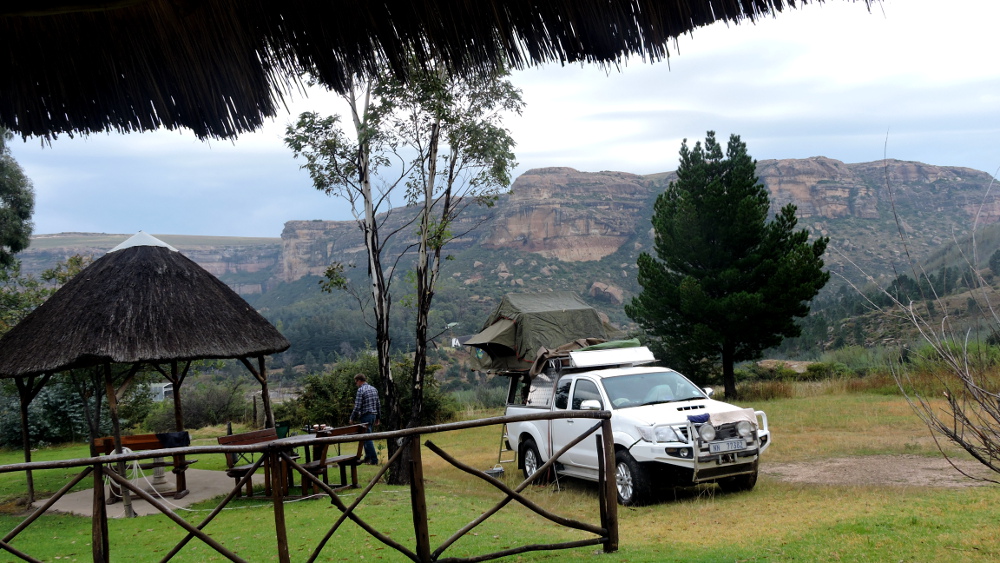 I had my first hot shower and first glass of wine in a long time.

Even so I missed Lesotho a lot, South Africa had its advantages.

The next day wasn’t so pleasant. It started raining after 500 meters and didn’t stop the whole day. Another advantage of South Africa: wide shoulders. Fortunately, I only had 45 kilometers to Clarens ahead of me.

Sometimes you just have to struggle through things in life. And today was such a case. Every once in a while, there was a break in the clouds and I could get an idea of the beautiful, mountainous landscape that I cycled through.

To my surprise there was a traffic jam shortly before Clarens. Then I saw posters for a multi-day music festival. Visitors tried to leave the rain-sodden parking lot and other tried to enter it. Big chaos and I quickly continued.

In Clarens I went to the Backpackers where I could camp, if need be. But really only in an emergency. 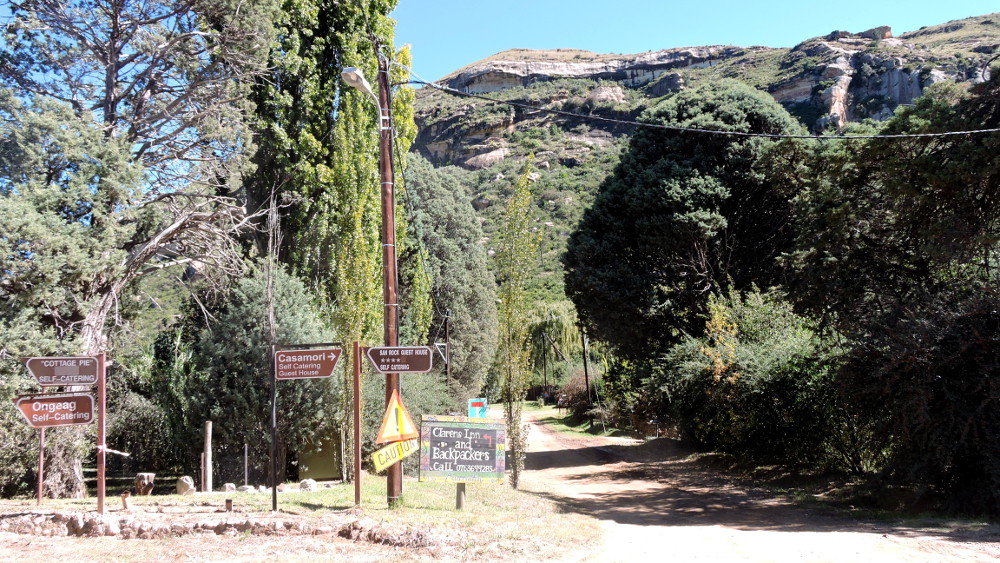 The young man saw how cold and wet I was and gave me a single room for the same price as camping. It hadn’t been rented because it had recently been painted and still needed to air out. What luck I had!

After a long hot shower, I felt much better. I went for a stroll through Clarens and understood why people liked it so much. It was a cute town with galleries, gift shops which always had a sweet smell, and wine shops. In my opinion it was nice, but did it belong in Africa? In Lesotho, which is only a few kilometers south, the world looked very different.

I made the mistake to buy a bottle of wine. I only had a little bit in the evening but felt horrible the whole weekend. It was the last time I bought South African wine which simply didn’t agree with me.

I wanted to relax for a few days. I was exhausted from all the climbing in Lesotho. The weather improved a lot and the Backpackers was well located 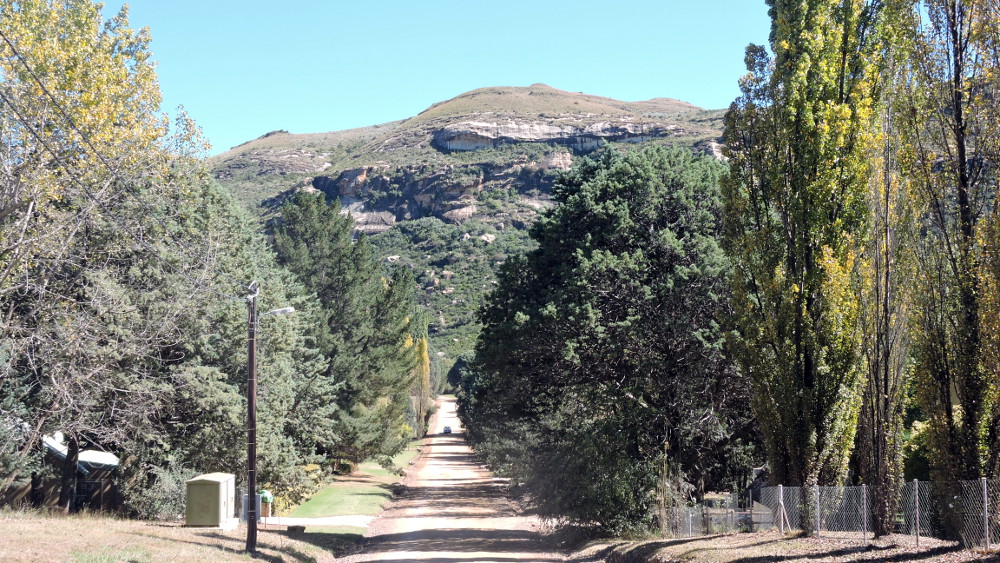 at the end of this gravel road, directly under the rocks.

Sometimes I went to town, just for a bit of exercise.

After three days I had recovered sufficiently to tackle the next mountains. It wasn’t as high as Lesotho but there was definitely climbing in Golden Gate National Park. 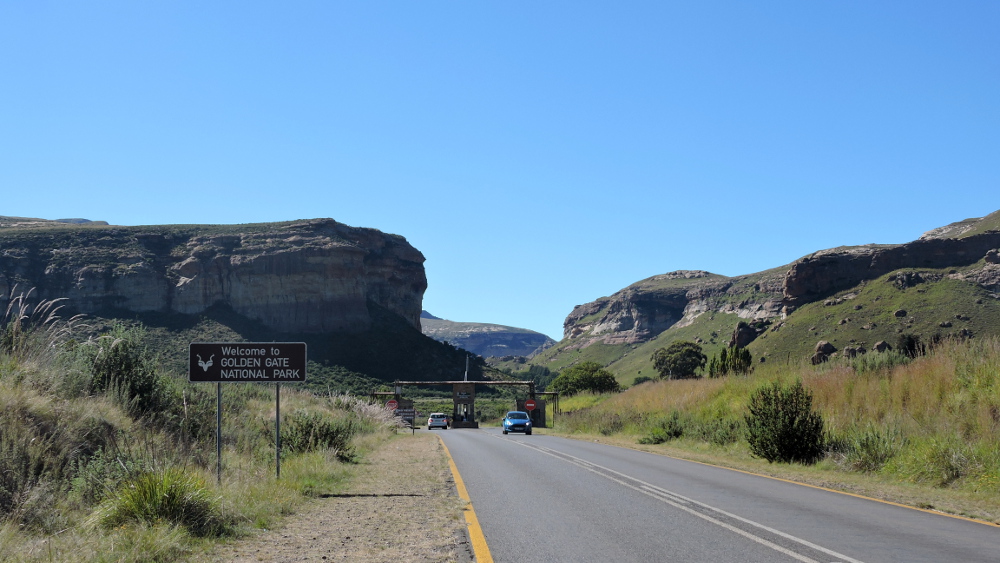 The mountain scenery was impressive. 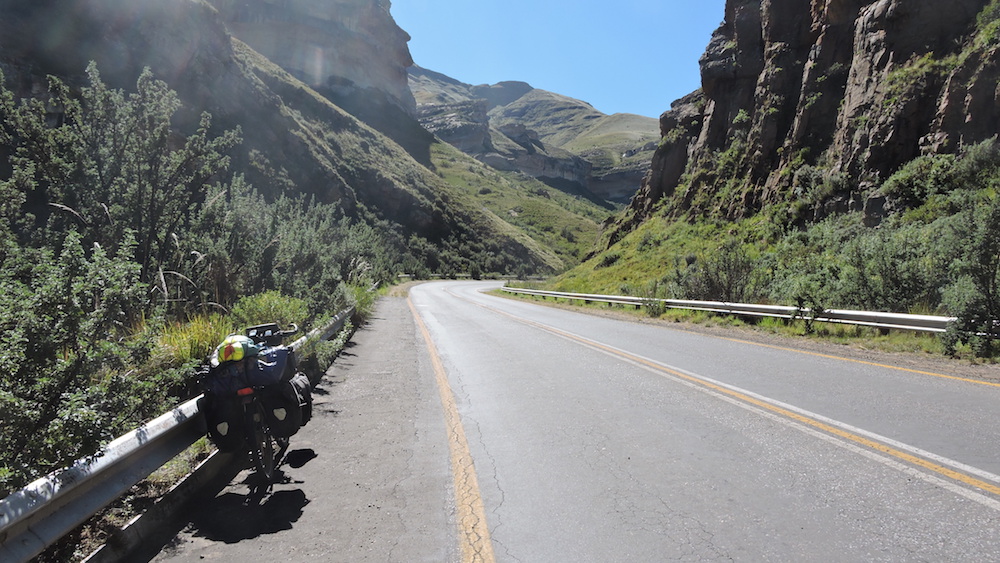 I had reached the highest point at 2046 meters and descended. 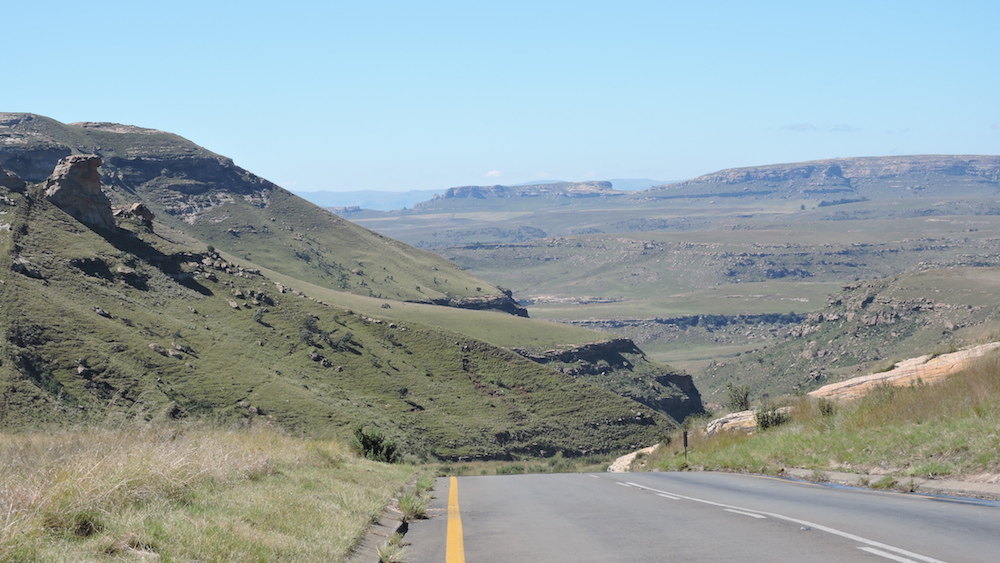 I had left the towns wrapped in cotton wool and now came the contrast of the townships.

Harryrsmith was a large city in which everything seemed mixed up. The high-end RV park was at the end of town, between filling stations and fast food outlets.

Next day I was far away from the tourists and cycled on a beautiful route in the direction of Memel. 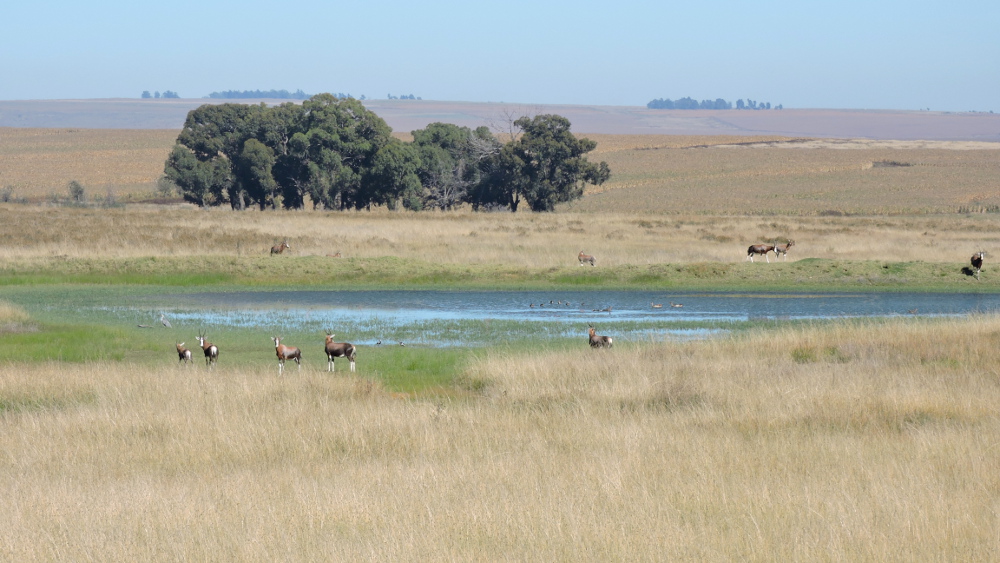 There were even some wild animals.

After 46 kilometers I came to the small village of Verkykersop and the heart of the place was the small store.

One felt transported to the past. 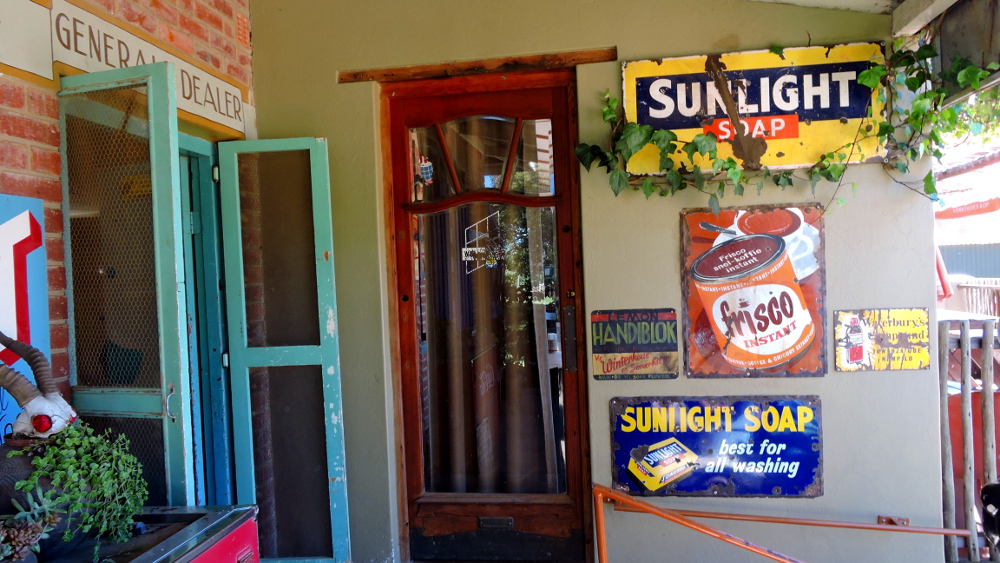 With tender care, the shop was passed on from generation to generation. 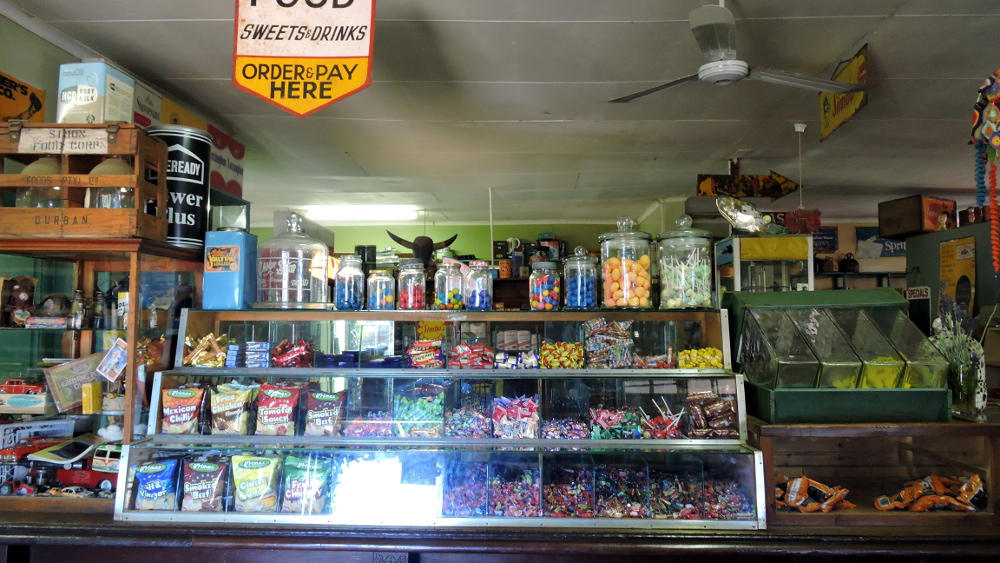 It was a lovely place to freshen up and rest.

I asked the owner if Memel was equally pretty. She said, it was larger and busier and then we both laughed. It could hardly be smaller and quieter.

I continued and the scenery remained spectacular. The road climbed to 2,000 meters and was very bad with big stones. Not nice to cycle on. There were paved sections when the road was very steep. 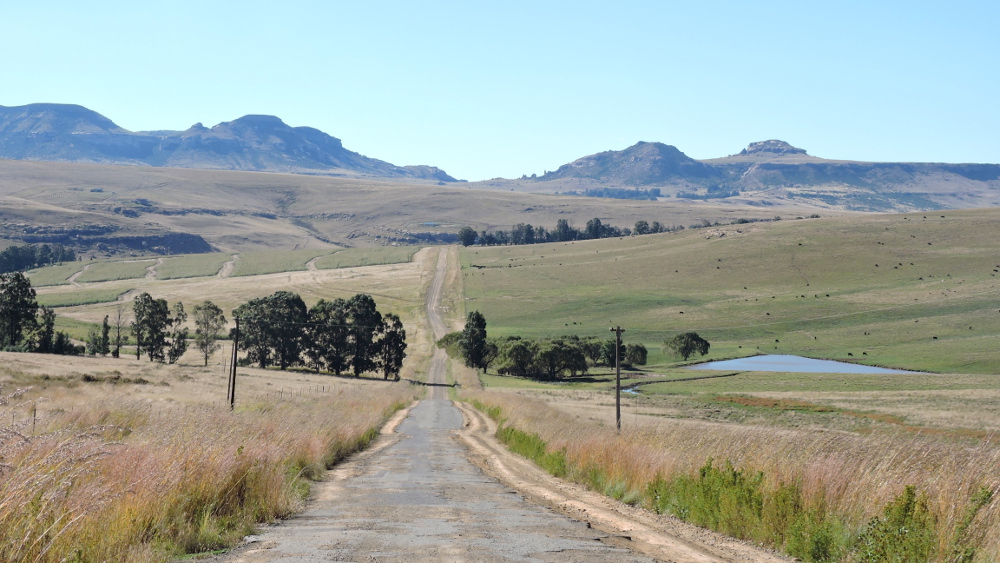 The sun set slowly. Everything was fenced in and there wasn’t a house in sight where I could ask for permission to camp. I had no choice but continue to Memel.

It was pitch dark when I arrived and there were only a few street lamps on the main road. Thanks to GPS and smart phone I finally found the police station where I could camp.

There were two more mountain passes. Not as high as in Lesotho but because the starting point was lower, the change in altitude was almost as much.

On the way down, I could take a short cut on a farm road. But the climb was unfortunately once again on a national road, with lots of traffic, a narrow shoulder, and tight curves.

Then I reached Volksrust and there was a beautiful campground at a small lake.

In the morning everything was shrouded in fog. 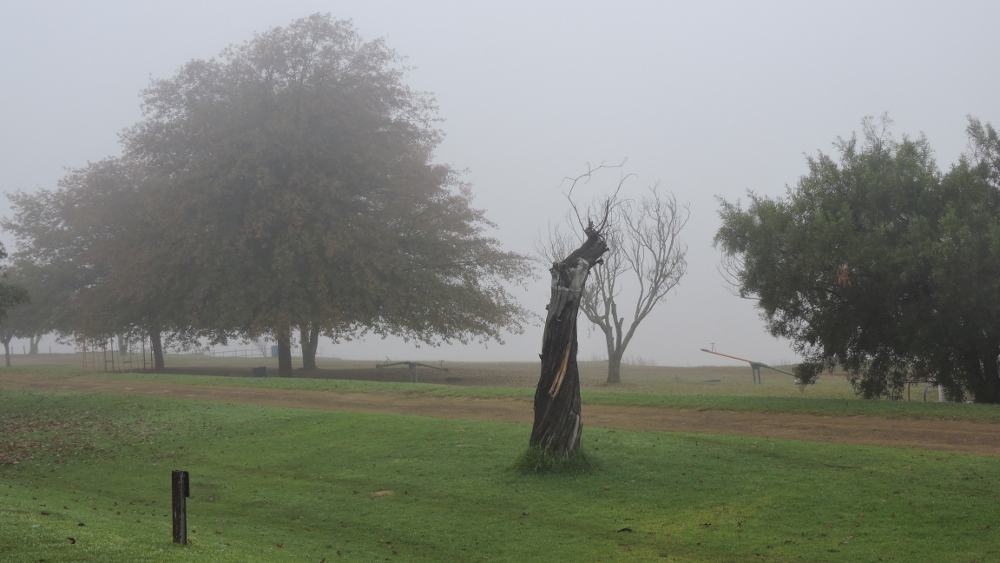 I was the only camper. It was so peaceful that I stayed. A day of rest did me well.

In the late afternoon there was beautiful evening light. 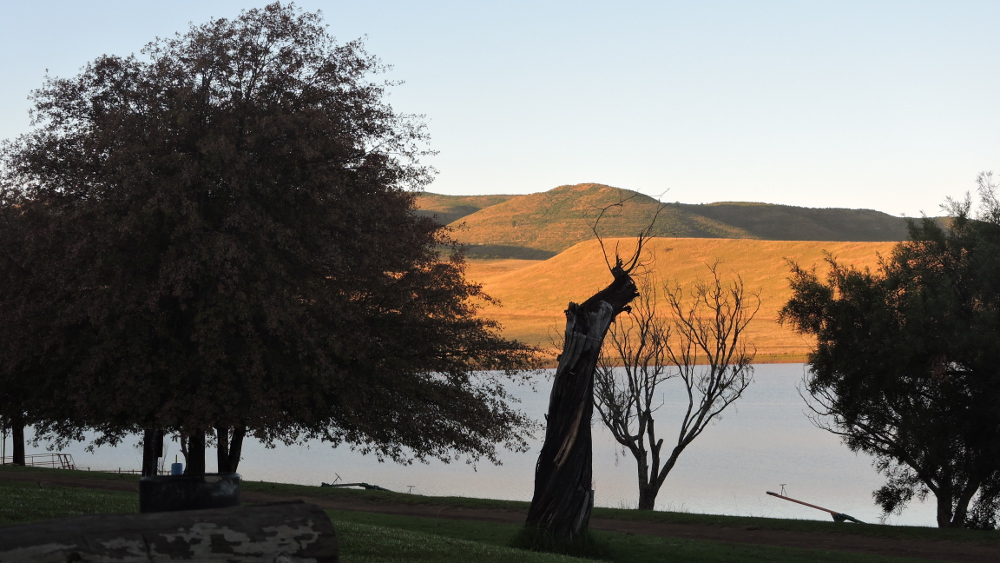 During my last couple of days in South Africa, I came through small pretty towns such as Wakkerstrom, Townships, and Passes. 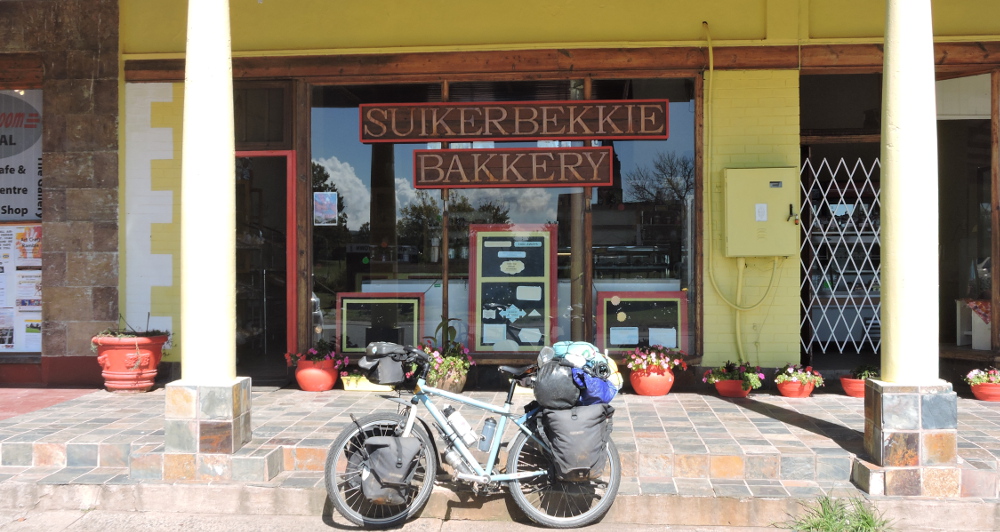 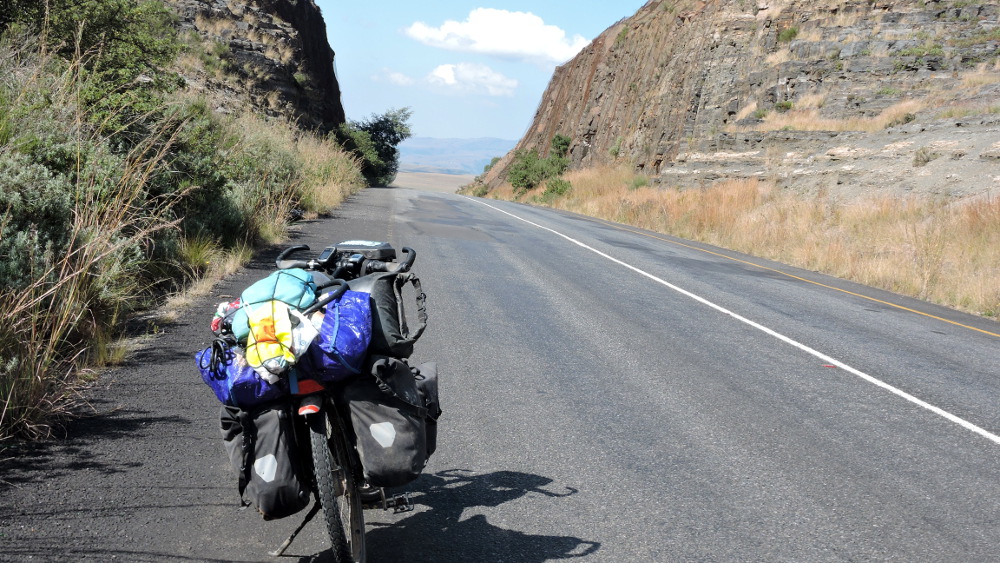 Until I reached the border behind Piet Retrief. 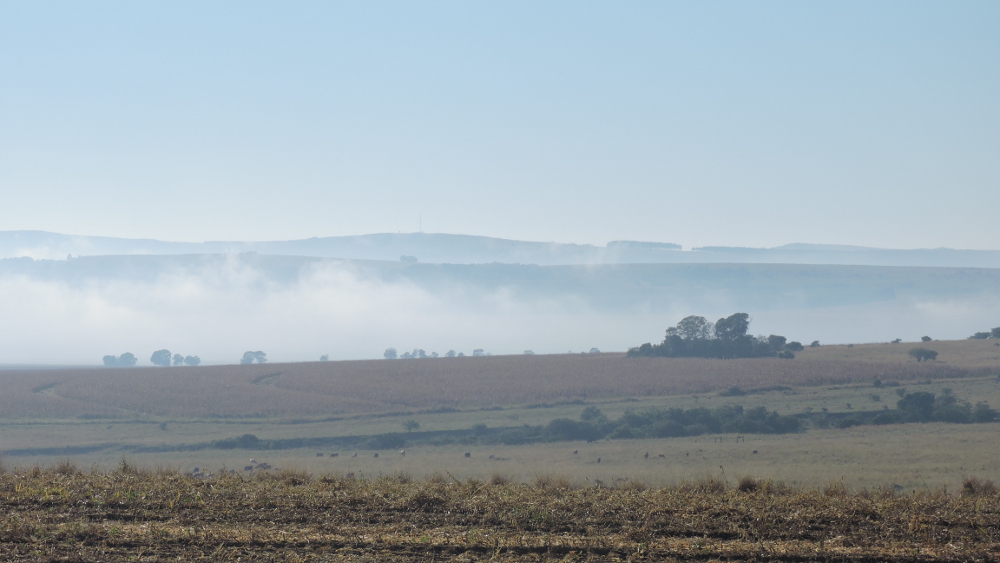 I had spent almost three months in South Africa and cycled 3,531 kilometers.

I had a very nice time. Apart from the large cities, cycle touring wasn’t as problematic as it was made out to be. The scenery was spectacular and the people were nice and hospitable.

But the situation isn’t easy going and seemed to deteriorate rather than improve. 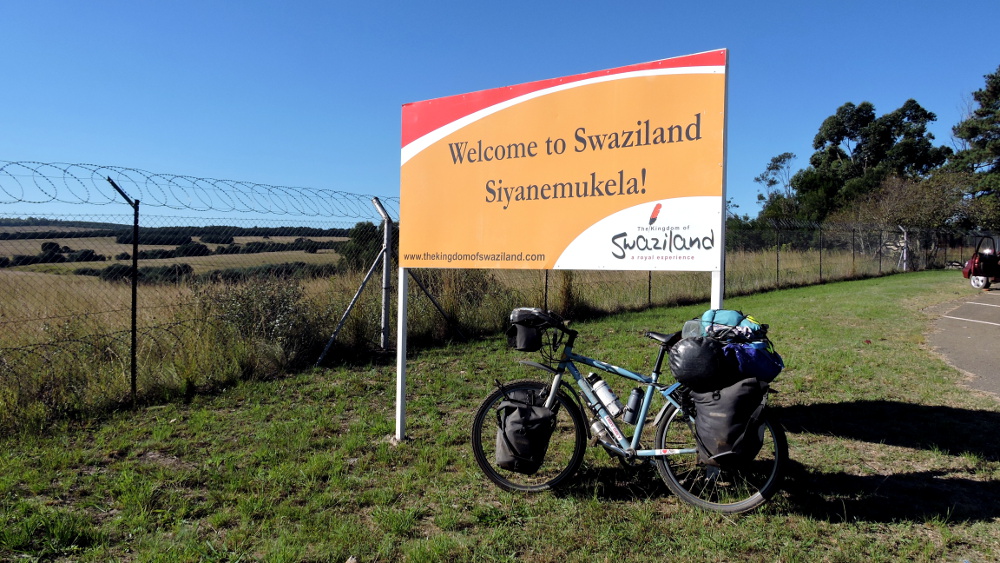 I knew as little about Swaziland as I did about Lesotho. It was also a kingdom but a lower altitude than Lesotho. However that didn’t mean that there weren’t lots of ups and downs. 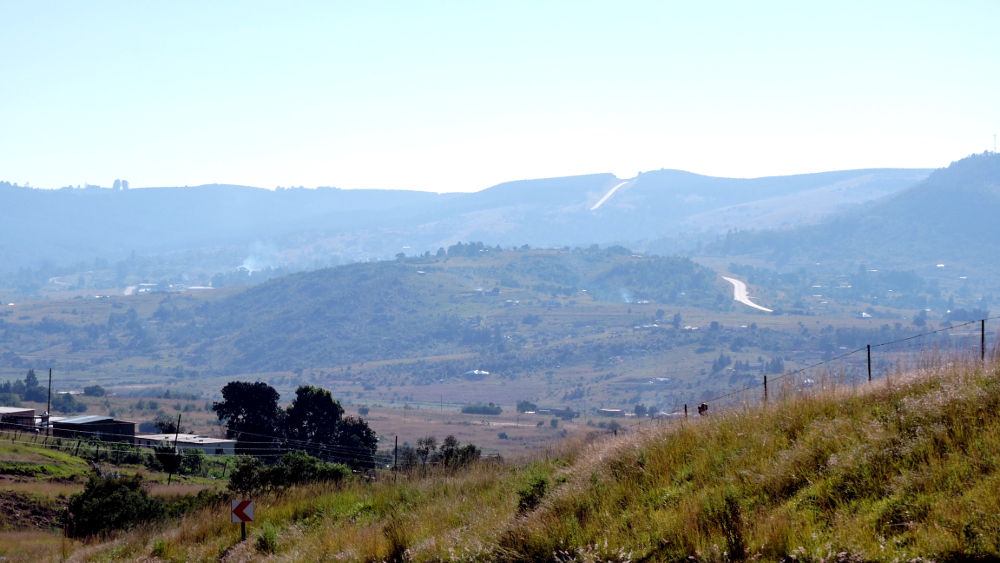 But at lower altitude and hence warmer.

According to Wikipedia Swaziland was one of the least developed countries but to me it looked more developed than Lesotho.

On the second day I discovered the “Baobab Batik” initiative 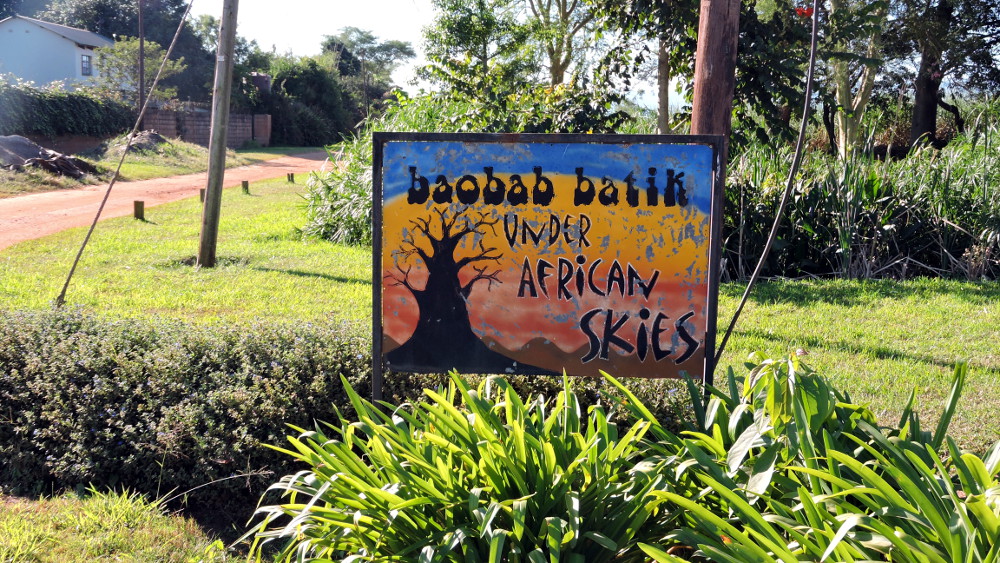 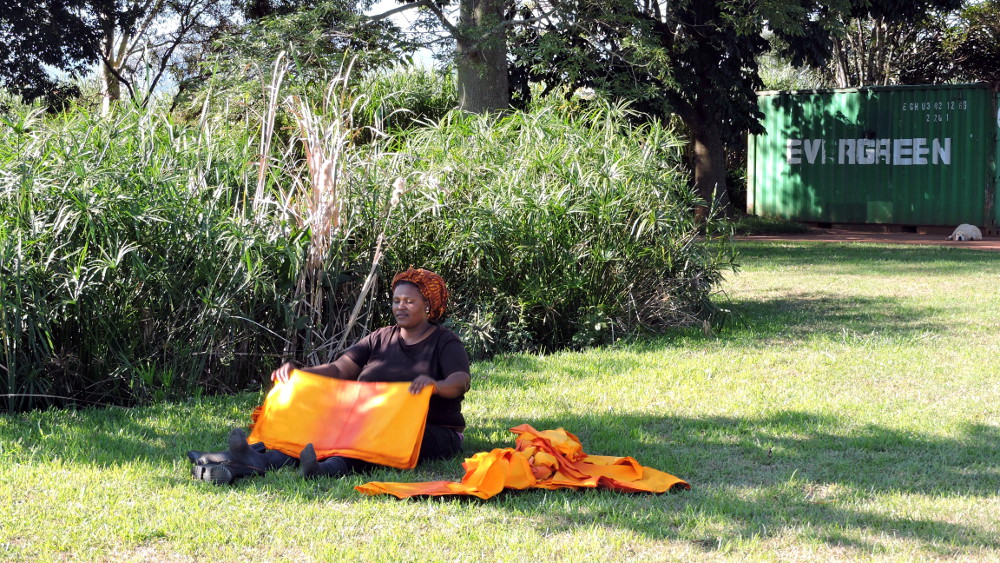 Right next to it were huge pineapple plantations. Who would eat all the fruit?

Further north were sugarcane plantations. The land was very green and fertile.

If there were no plantations, there were national parks. The three largest ones were Hlane, Mlilwane, 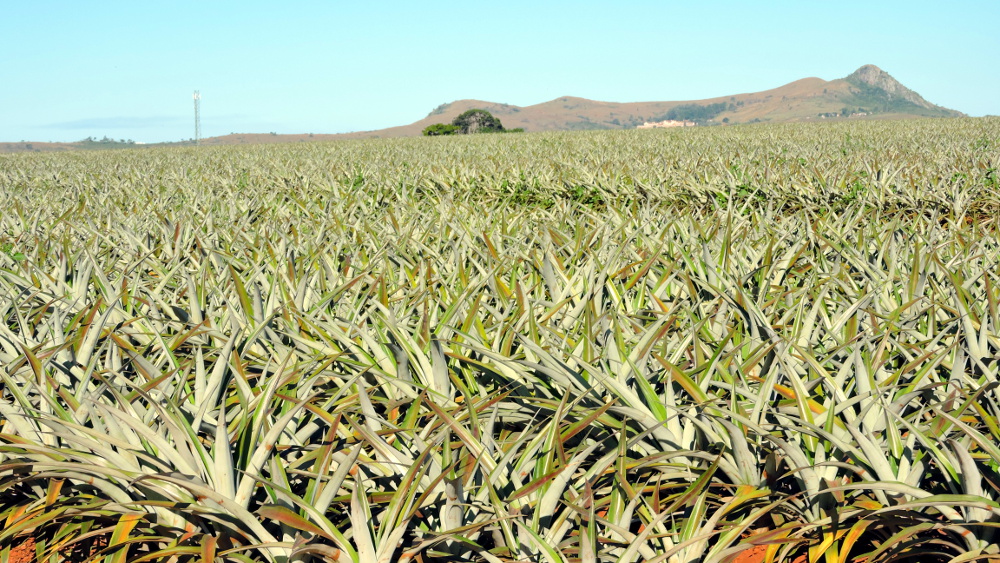 And Mhkaya. Tourism was very important.

I was allowed to cycle in Hlane and Mlilwane Parks and didn’t go to Mhkaya. I stayed two nights in Mliliwane and it was so peaceful. 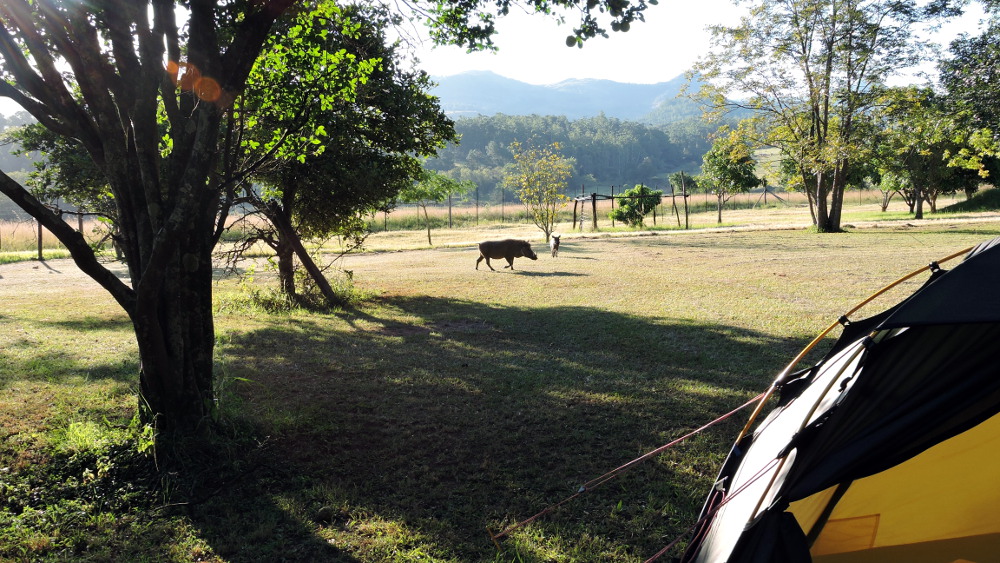 I only saw the Hlane campground at night. 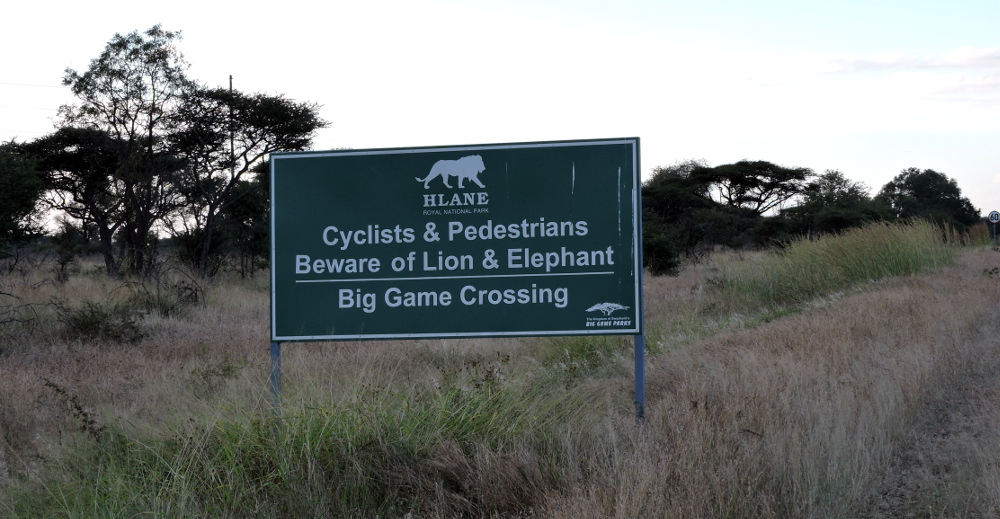 Unfortunately, I picked up thorns as souvenirs and had several flats the next few days.

By now I had descended a lot and the area close to the parks it was almost flat. 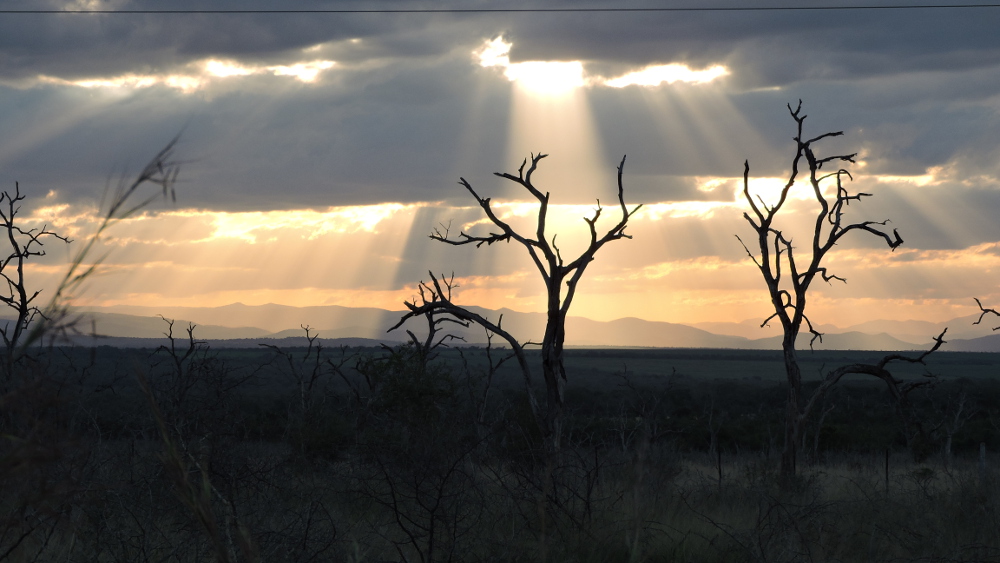 To reach the border with Mozambique I had to climb once again. Fortunately, I had recovered and was fit.

I only spent four days in Swaziland but that was enough. After Lesotho it wasn’t very exciting and it seemed more like a province of South Africa.

Next up was Mozambique and finally again the ocean.

Keep reading to learn how I fared in a country about which I had been warned so much.