Who knows something about Burkina Faso? It’s not your typical holiday destination. I’m old enough to remember that it used to be called Upper Volta. And it’s only now that I learnt the reason. Apart from that I hardly knew anything about the place. When I planned my route, I discovered its location. And after having cycled in the country for a few days, I know a little bit more. And it’ll be the same for you, if continue reading.

I had such a nice time in Mali and was sad that I didn’t stay longer. I passed border control into Burkina Faso and immediately was asked by some teenager for presents. I felt like turning around! But at least they asked nicely, and it wasn’t a demand like in Senegal.

Next, the border agent scolded me that I hadn’t taken the right track to reach him but that I crossed the line on the road and then cut across to him. Oh my, what a start! Later on the police asked for the “Carnet Gris”, the registration papers for my bike. I explained to them that we didn’t have such a thing in Germany and that my bike didn’t have plates either. He let me go.

Then two youngsters accosted me when I stopped for a break and I Immediately felt like leaving the country. I was only glad that I could head for Ghana on the straightest route.

Nevertheless, I had to build in a little detour. In Mali I had stayed on the national road and paved roads and now it was time to return to the dirt roads. I didn’t quite know why but I usually feel much better when I’m on a dirt road. Perhaps because there was less traffic and I had to concentrate more on the road. Whatever the reason, my mood improved considerably.

Before I left Mali, it looked as if the mango season was slowly coming to an end. Here the harvest was still in full swing. 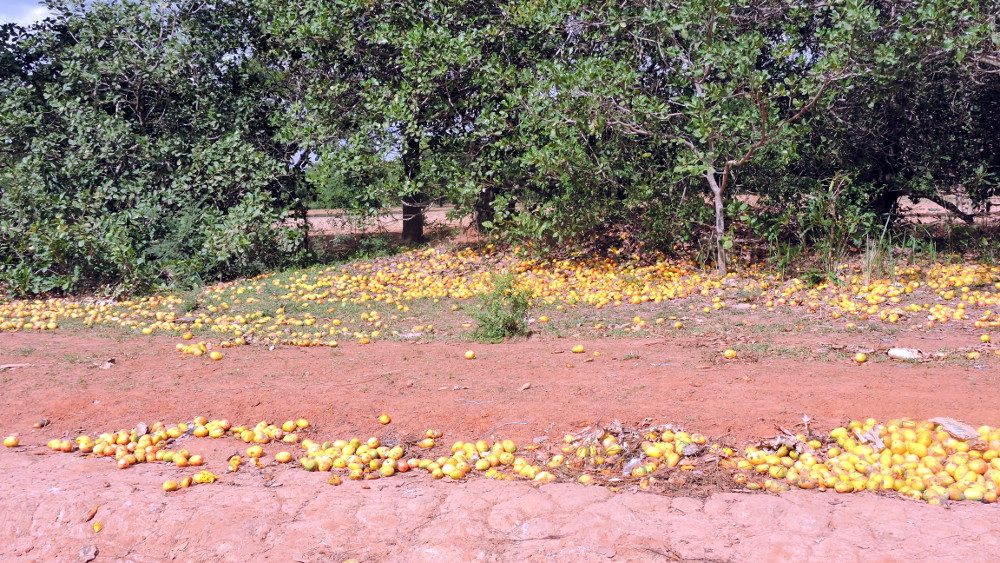 These must have been leftovers which couldn’t be transported. Usually they were harvested green and tasted accordingly.

The landscape was beautiful and, in my enthusiasm, despite GPS, I lost my way. 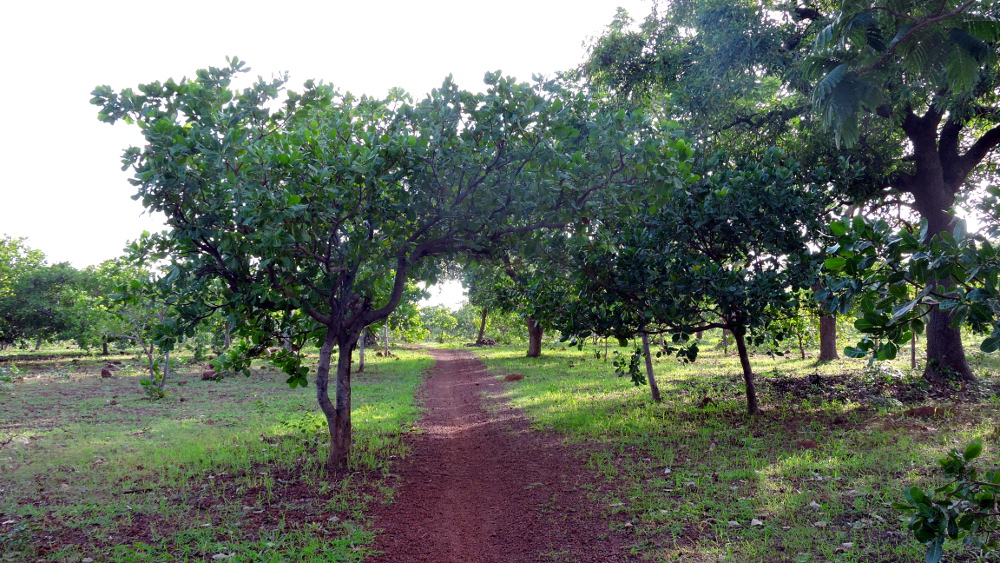 It was quite navigable, but I came through fields and farms where they probably hadn’t seen white people before. Hardly anyone spoke French. But I found at a least one person in each village with whom I could communicate. 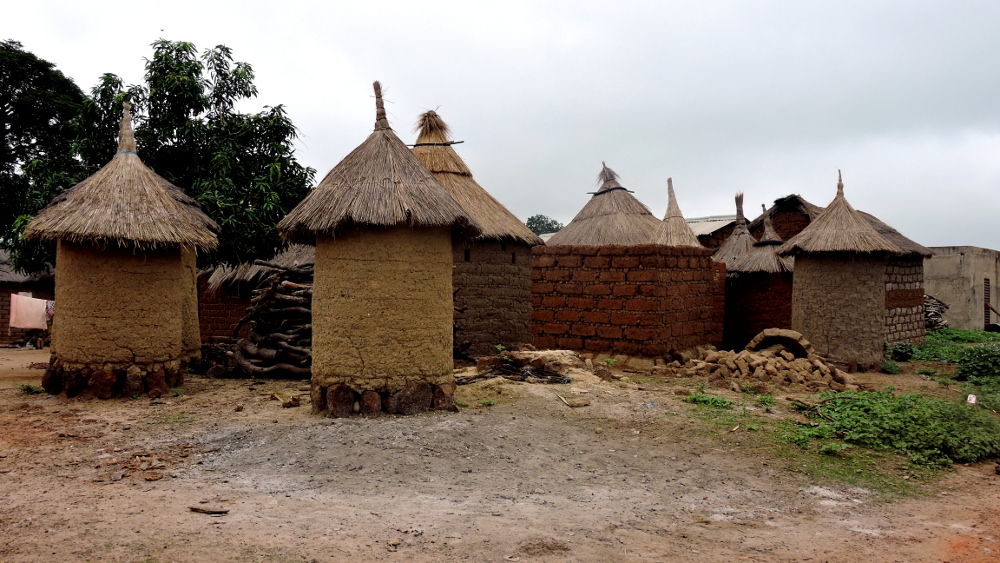 People were very friendly and hospitable and allowed me to camp between their huts. I had my peace and quiet.

Next day I continued and was back on a proper dirt road. 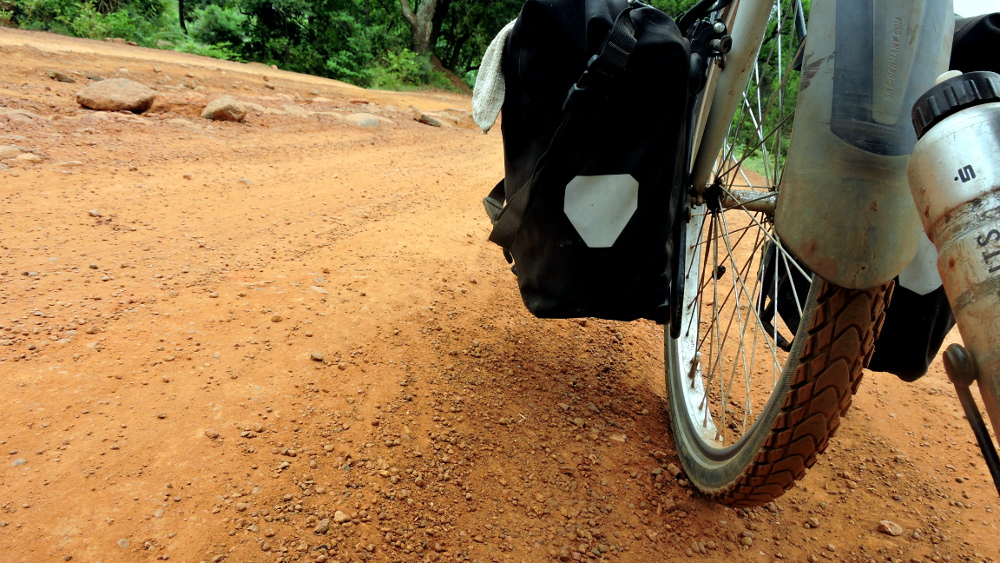 Suddenly a truck appeared while so far I had seen so far were bikes and mopeds. I was surprised how laboriously he made his way and decided to take a photo. The truck was still far away and one couldn’t identify anyone. Suddenly a young man appeared and yelled at me very aggressively that I had to delete the photo immediately.

I was afraid, he might ruin the camera. Fortunately, I also get angry in such situations and I can yell very loudly. He backed off and I stood there with a fast beating heart. Last time such a thing happened was in Senegal. I’ve photographed many broken-down trucks in other countries and for a long time, I hadn’t asked whether it was allowed. I got the impression that Burkina Faso wasn’t for me.

I was hoping that pavement would appear soon because it looked like rain and I didn’t want to be stuck in the mud. I had to wait to be surprised because neither GPS nor map would tell me when the road surface would change.

And the surprise came soon and before the rain. 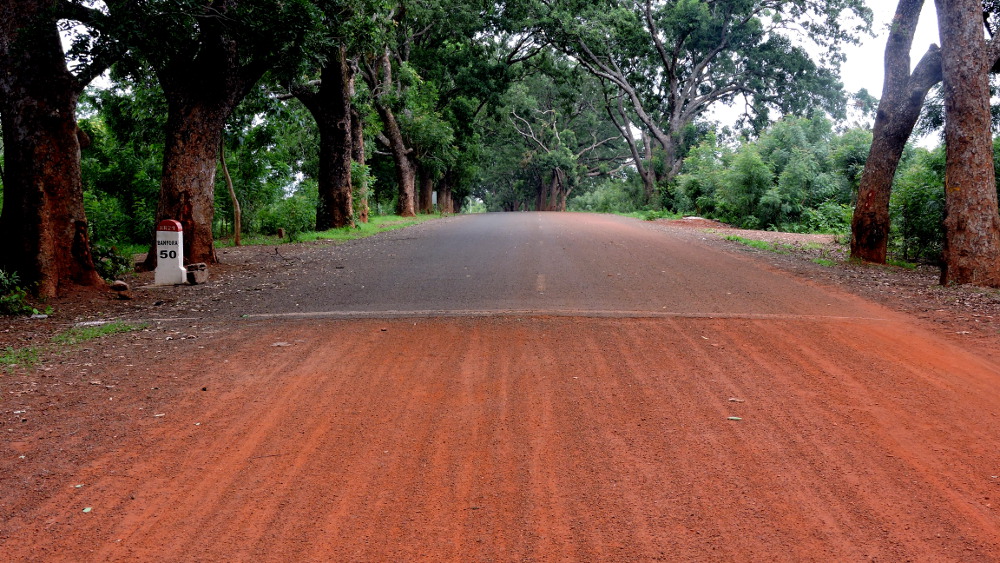 Exactly 50 kilometers before the town of Bonfora. And I immediately realized why the pavement started. After the next curve, there was another surprise: the “Aiguille de Sindou”. 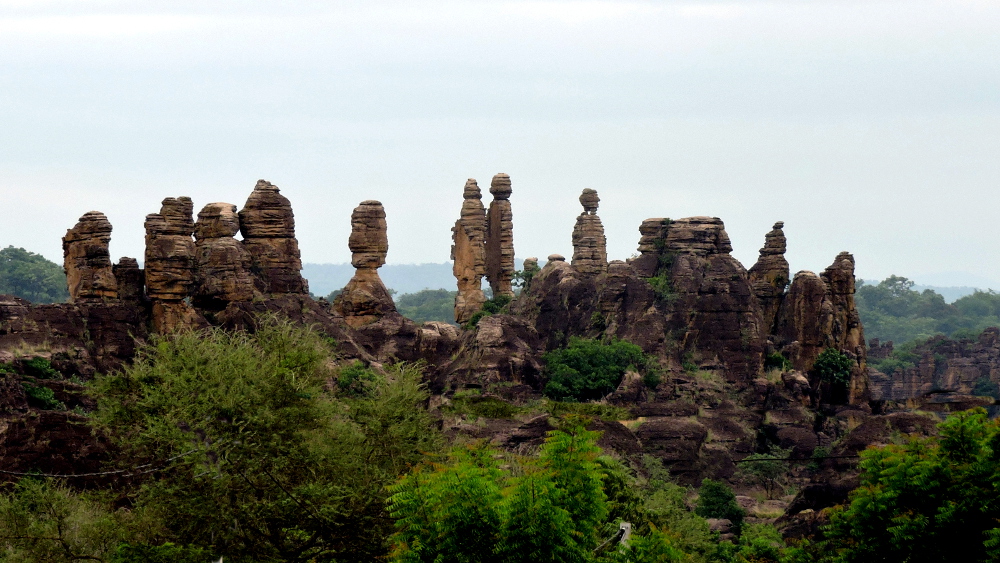 Things like that happen when one travels without a plan. On the map I had seen that there were several tourist attractions in the area. But I didn’t know what “Aiguilles” was because my French wasn’t good enough to make the connection. 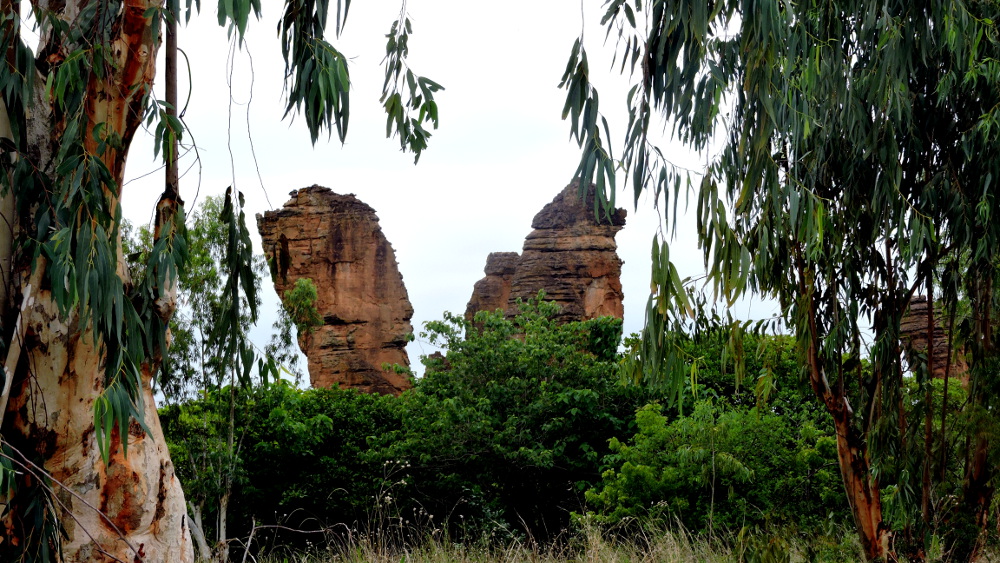 The rocks looked like needles which were meters high. Almost more impressive than the rock formations in Mali. The detour was well worth it!

Like in many tourist destinations, there wasn’t only a paved road in this area but also a lot of tourist accommodation, like the Campement Kegnigohi at Lake Tengrela. 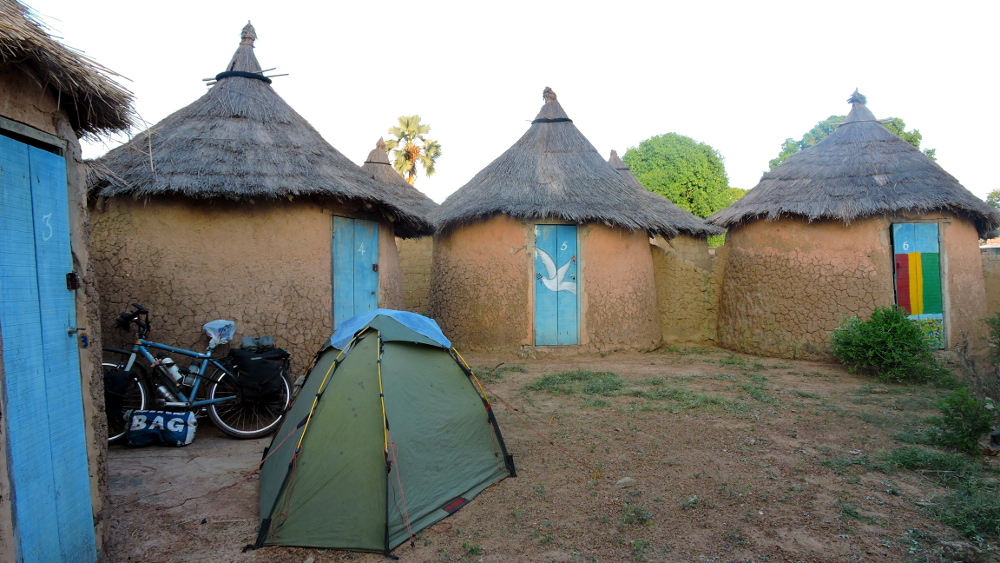 Supposedly there were hippos in the lake. But they wanted to collect a fee of 2,000 CFA just to go to the lake and I declined. Perhaps for tourists who come straight from Europe, it wasn’t a lot of money. If you knew the prices, it was very expensive. Most days I spent less on my meals.

An entrance fee would have been more understandable if there had been any value added, e.g. information boards. It wasn’t nice to block access to the whole lake. I assumed that in the heat of the day I wouldn’t see animals anyway. And hippos I had already seen in Senegal.

Instead I indulged in dinner at the camp. It was spaghetti with tomato sauce (for 750 CFA) but my stomach didn’t agree with the meal at all. In the early morning hours, I got sick and won’t go into details.

I continued anyway. I didn’t like the idea to be sick in a country which I didn’t enjoy. I went directly to Bobo-Dioulasso, a larger town, and found a place to stay to recover.

I didn’t want to take any drugs because usually I get better quickly. The man at the Auberge Awadi was very nice and offered me a large glass of Coca-Cola. Usually that’s a good first remedy. I didn’t have a SIM card because I had been in Burkina Faso only for a few days. Therefore, I couldn’t get internet and the guesthouse didn’t have Wi-Fi. The guy kindly gave me a lift to the internet café and maybe I should revise my opinion of the country.

During the night there was a big thunderstorm, with a lot of wind and rain. Next day it had cleared up and the air was clear.

I thought the best remedy is a good night’s sleep and cycling. With renewed energy and tailwinds, I made good progress. After the turnoff for the border at Hamale, there was virtually no traffic, except cyclists. The landscape hadn’t changed much since Mali. Constant up and down through a green bush landscape.

Suddenly small villages appeared again which by now I recognized from far away: gold diggers! I needed to cycle a few more kilometers before I could find a place to camp.

It turned out to be not very far. In the next village there was an old Muslim man sitting in front of his house. I told him my story: name, what I was doing, that I was looking for a place to camp. And he allowed me to stay. 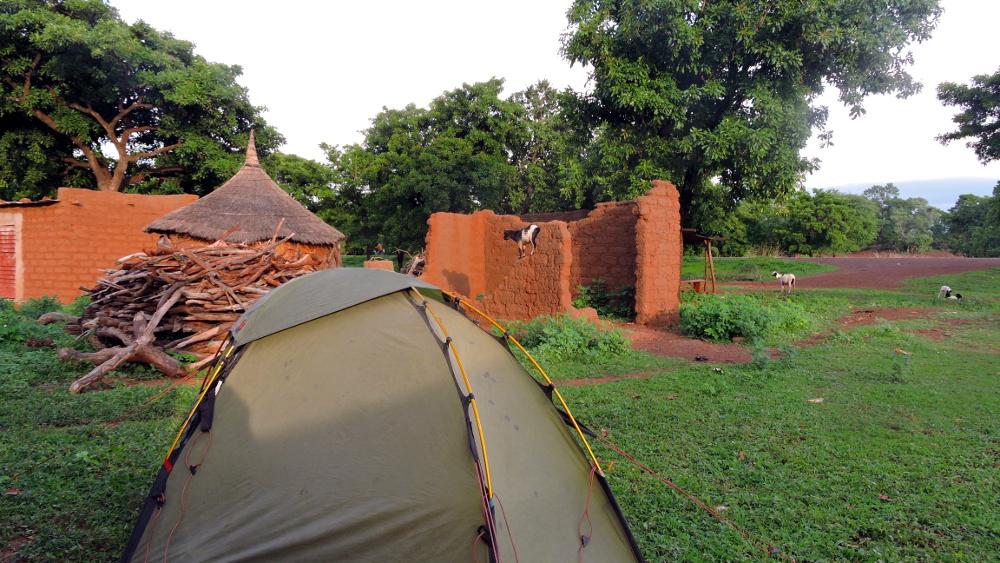 camping in a little farming village

Nearby was a well. Women and girls had three to four large canisters on their bikes to fetch water. I think one of the canisters holds twenty liters and the heavy loads they carried were unbelievable.

In the village there were huts which looked a bit different. I was curious and went around them to find an entrance. 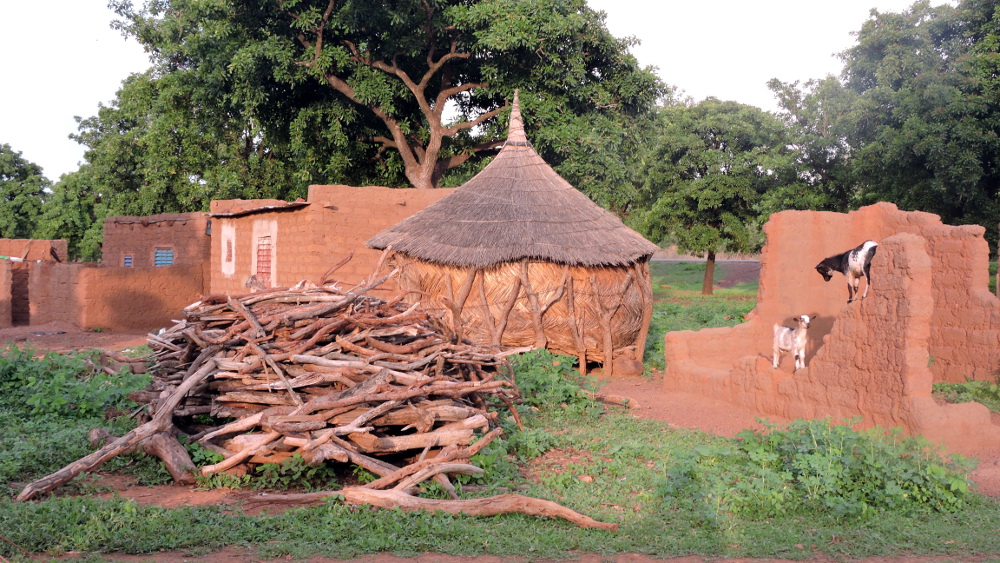 Nothing. Strange. I asked. A nice young man who spoke very good French told me those huts were for drying of “Mille” and pulled an herb from an opening under the roof. It must be similar to St John’s wort, except not yellow but rather purple. It dries for about three to four years in the huts. I continued to be amazed by the knowledge and techniques of the locals. We could learn so much from them.

Even so it was Sunday, shortly before 6:00 am the young man stood in front of me and said his farewells. He had to leave for work. What? To the fields. They grew peanuts, maize, beans, and even cotton.

I stayed a bit longer and then was on my way.

After the turn off to Po (here the place names are much shorter), the road got worse and only cyclists were using it.

Due to the rainy season, the landscape must have changed a lot in the last few weeks. 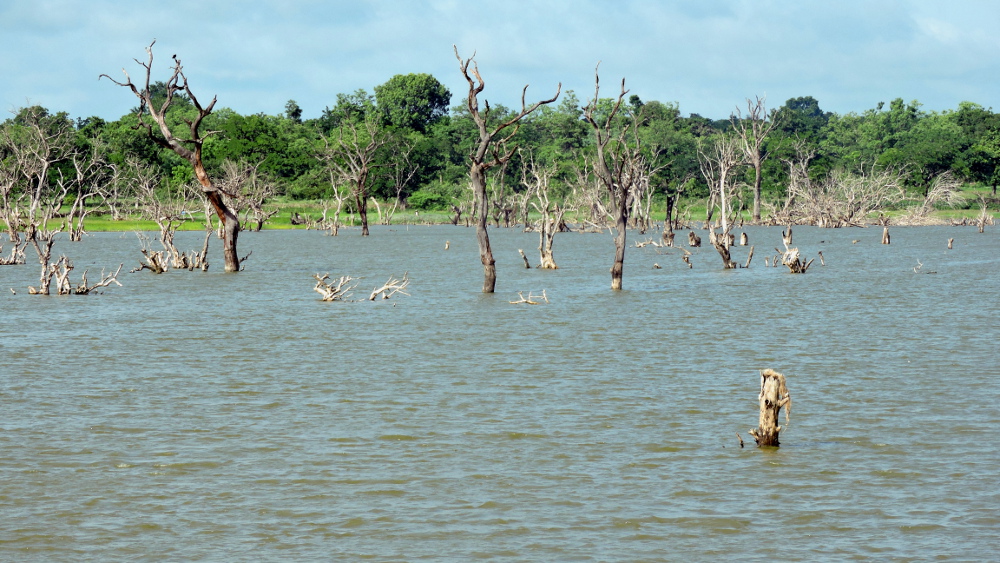 Now a lake, but during dry season?

This lake probably hadn’t been there for long.

It continued to get very hot but thanks to tailwinds I made good progress. That would change from tomorrow onwards because the route in Ghana would be due south.

The clothing of people changed in two ways. In the countryside, people wore traditional garb. Women had a cloth around their waist and nothing on top. The little girls were naked with bright beads around their waists and the little boys wore nothing at all.

The other way was the complete opposite. Women wore jeans and T-shirts. Their hair was straightened, lengthened, and colored. It took time to get used to it.

By now, I had come to enjoy Burkina Faso and its people and wanted to spend one more night. Thanks to the tailwinds and because I didn’t come across a suitable place, I found myself at the border. I timidly told the border guards that this would be a nice place to camp and asked if I could stay. But they replied that I would soon cross the border and thus I continued to my ninth African country.

Now you learnt a little bit about the country. I’m sure that was lots that I didn’t discover in the short time I was there. What more do you know?