It wasn’t easy to cycle through West Africa during the times of Ebola and Boko Haram. The borders to Côte d’Ivoire remained closed. I didn’t want to fly and the only way to leave Guinea was through Mali. That country had been in the news too often because of Boko Haram. Only one week earlier, seven UN soldiers from Togo had been killed in an attack.

I had already met travelers who had come through Mali without any problems. According to recent reports, south of the capital Bamako it was supposed to be peaceful. Let’s go! I had cycled through a few other countries that had not been so safe and what’s safe anyway these days.

Once again, I was at the Malian border. It was fortunate that it was now six weeks later, and the rainy season had started. The temperatures were a lot more pleasant and everything was incredibly green. The disadvantage, it was the beginning of Ramadan. So far that hadn’t been a problem. But in Mali?

The last bit of Guinea hadn’t been pleasant and I crossed the border in late afternoon, hoping to find a place for the night.

This time the border guards were very nice. Well, this time I had a visa. One even spoke German which was an elective in high school.

I asked where I could camp. They told me that eight kilometers down the road was a health checkpoint and that I could pitch my tent there. That would be a good fit.

Compared to the end of Guinea, the beginning of Mali was like a dream. Empty roads, everything quiet and green, the birds sang, and at this time of day, the light was beautiful.

It was surprising how the look of the people had changed. Like in Senegal, there were tall people, Tuareg with the blue veil, people with Rasta dreadlocks, and no white peoples.

It was impossible to miss the health checkpoint. It must have been busier when Ebola still was a real danger. Now the nurses didn’t have a lot to do.

I was allowed to put up my tent in front of the UNICEF tent which was no longer in use. 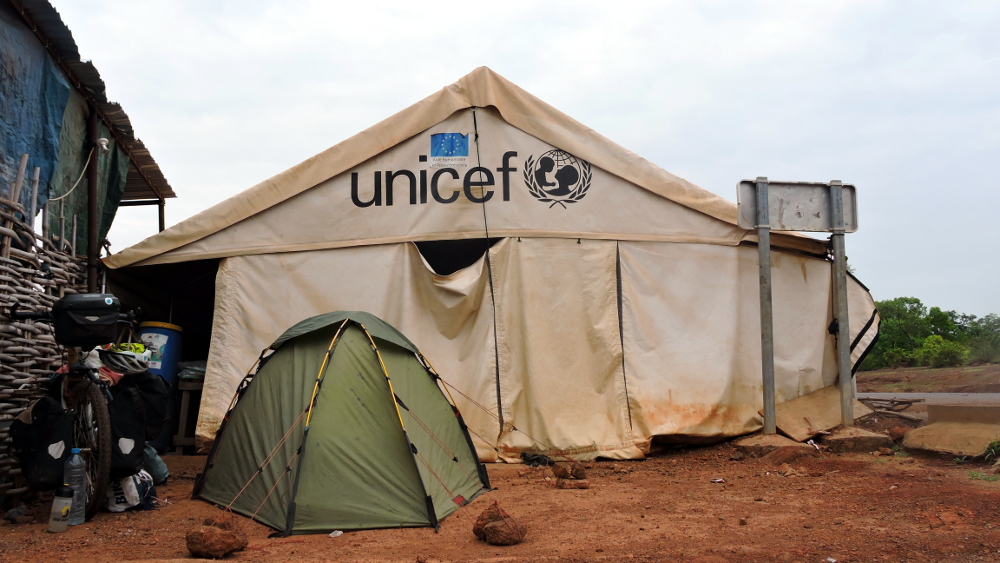 It didn’t mind that it was right next to the road. Hardly a car passed at this hour. The people who stayed here left me in peace, no one came to beg. No “donnez-moi…”.

Next day I was happy to discover that even so it was Ramadan, market happened as usual. 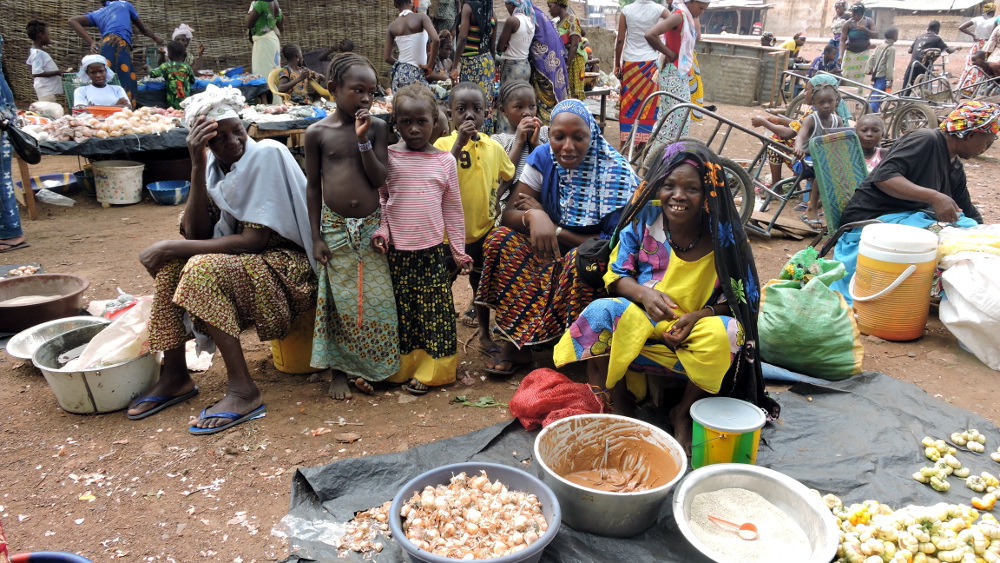 Market in a Malian village

Not everyone here is Muslim. They even had peanut butter and water, mangoes, avocados, and hard-boiled eggs. I didn’t need to starve.

People were relaxed and I quickly forgot about any danger and enjoyed myself more and more.

Girls also have to work a lot here. 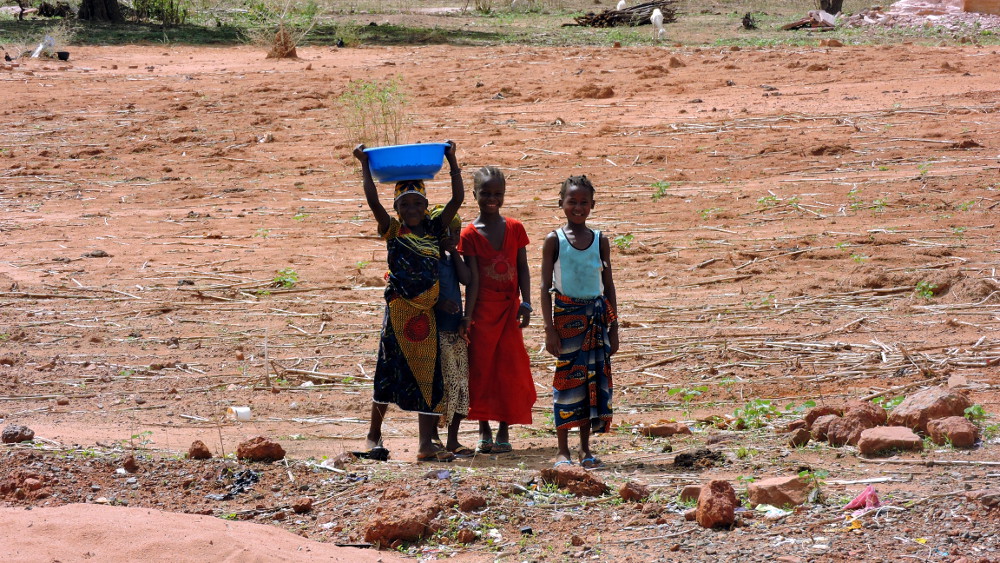 Suddenly it got very touristy again, something I had not experienced since Senegal. In Sibi there were a lot of guesthouses, hotels, and tour agencies. It was easy to see why. 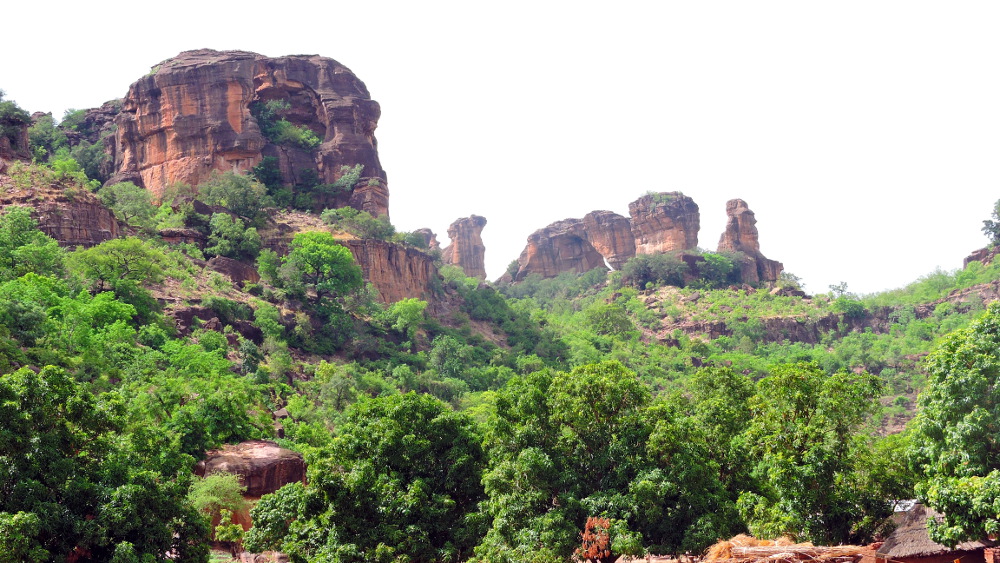 The most beautiful rocks. 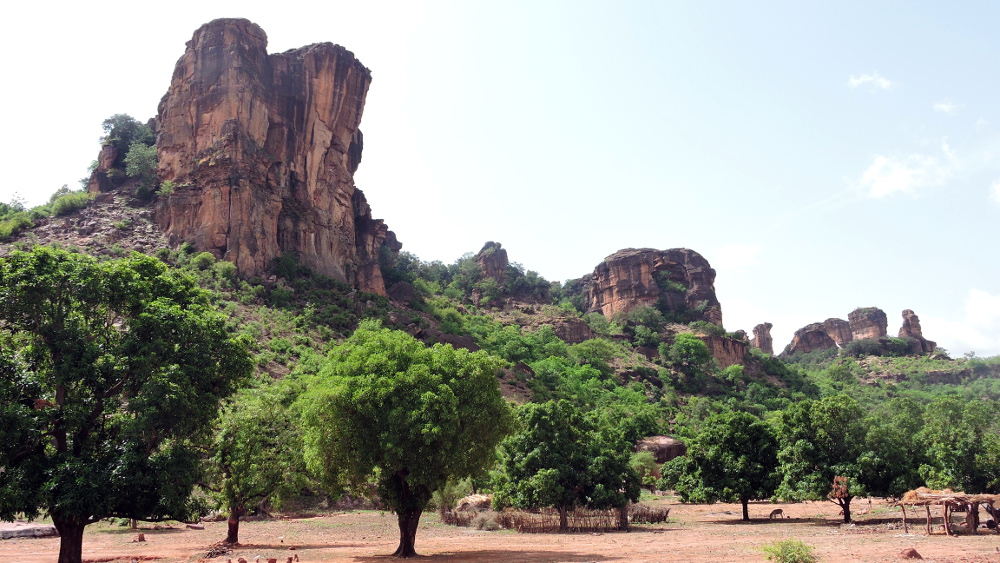 The most stunning landscape 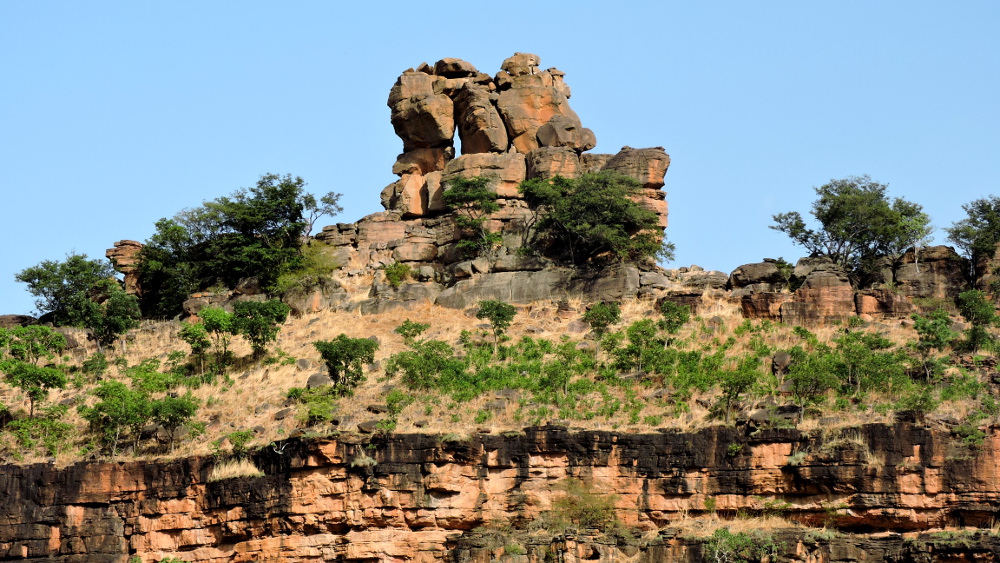 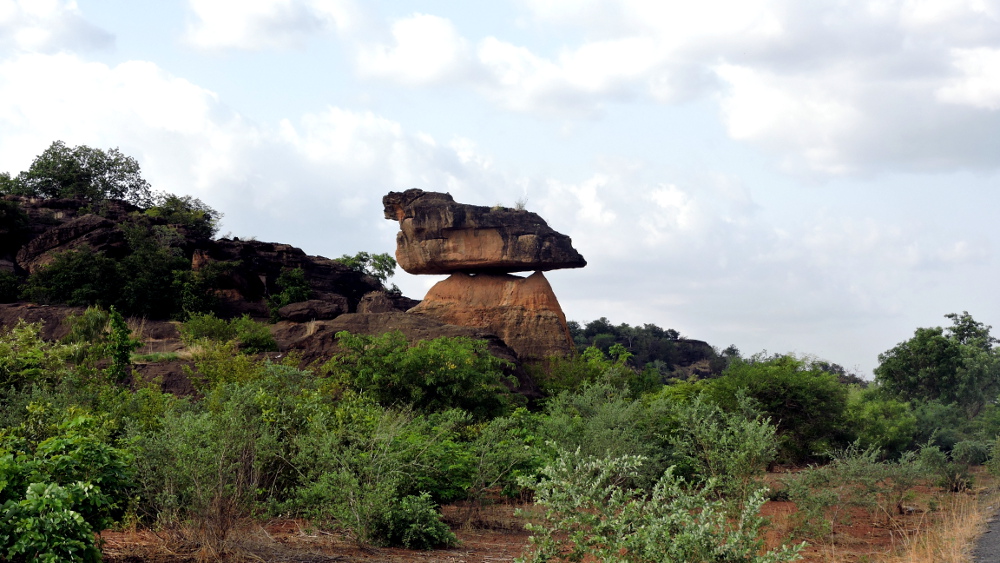 But nothing kept me in the town.

The later the afternoon, the redder the rock formations.

At last I found a gorgeous place to camp. 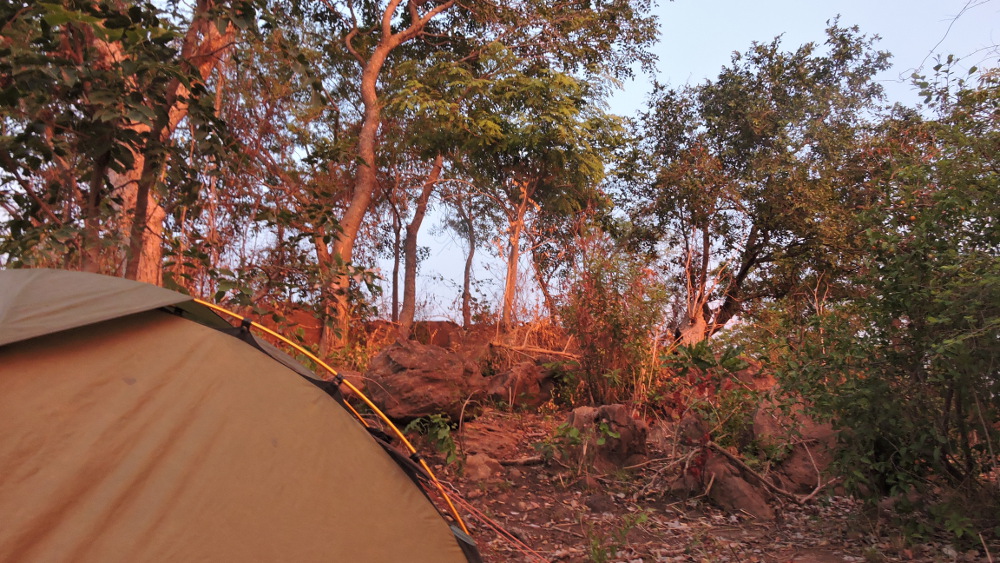 wild camp under the rocks

On my way to the capital, I came across an infantry battalion. All soldiers wore bulletproof vests and many had machine guns. There were a lot of soldiers, at least 100, including women. Presumably it was just an exercise. Most of the soldiers were in good spirits and enjoyed the fruits by the roadside.

Nevertheless, a drill is always a drill to get ready for combat. It was a sign that things weren’t as peaceful as they seemed.

The capital Bamako was a big surprise. 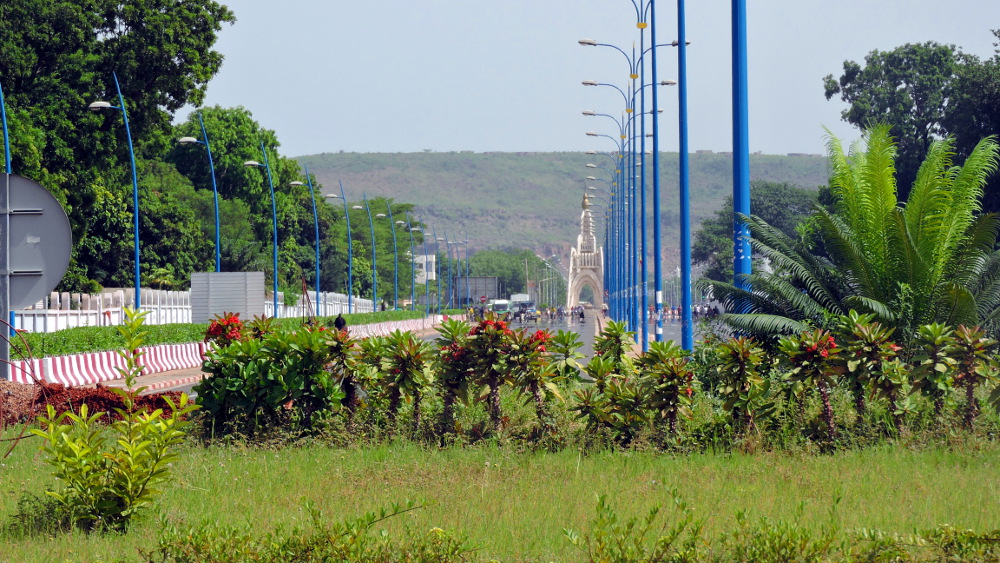 Of all the African capitals I had seen so far, this was the cleanest, greenest, and least chaotic. Like the Niger ran through the city 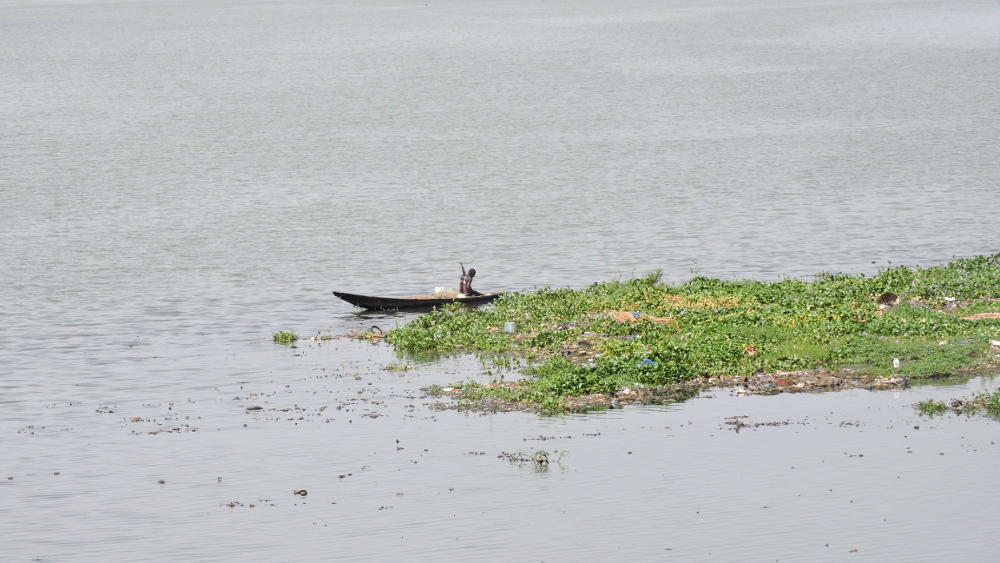 Traffic flowed (at least on most roads) 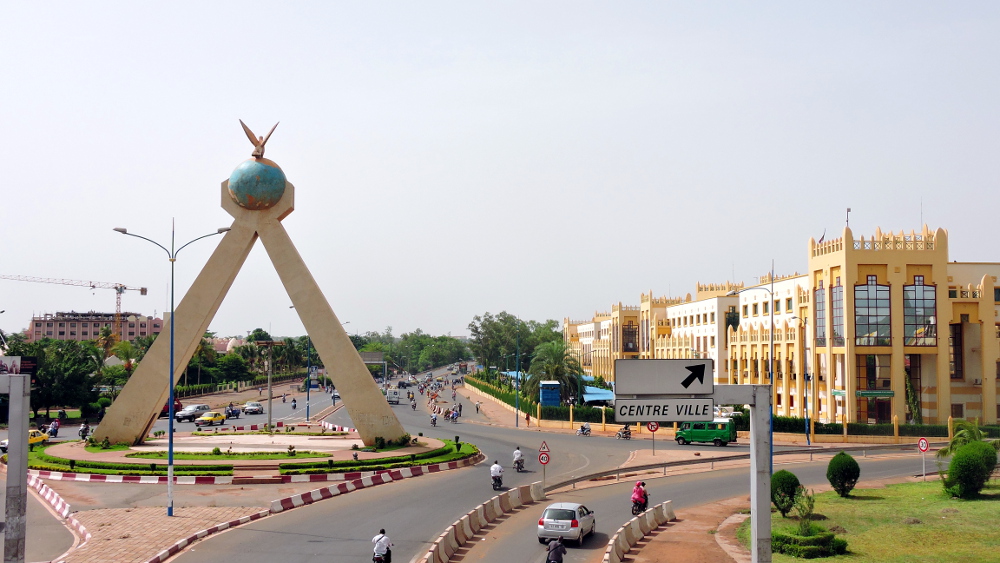 I wondered why there wasn’t the same chaos at every intersection that I had seen in Dakar and Conakry. Then I realized, there were functioning traffic lights because there was power.

(apparently there were also power cuts but I never noticed them)

I wanted to get to the Sleeping Camel, a meeting point for travelers and fortunately I had the coordinates for the accommodation. I immediately found the road behind the German embassy. But there wasn’t a sign, no indication whatsoever. I had been in touch with the manager and therefore knew that it must be close by.

Then a guard called out to me, opened the door, and I entered behind the high walls. As a security measure, all signs had been removed, and security guards had been posted. On foot, one passed through a security passage.

The guard outside called to the guard on the inside who pressed a button which opened the outer gate. When the person had entered the secure passage and the outer door was locked, the inner door opened. And people still believed that there were no problems here? Why else all these measures? 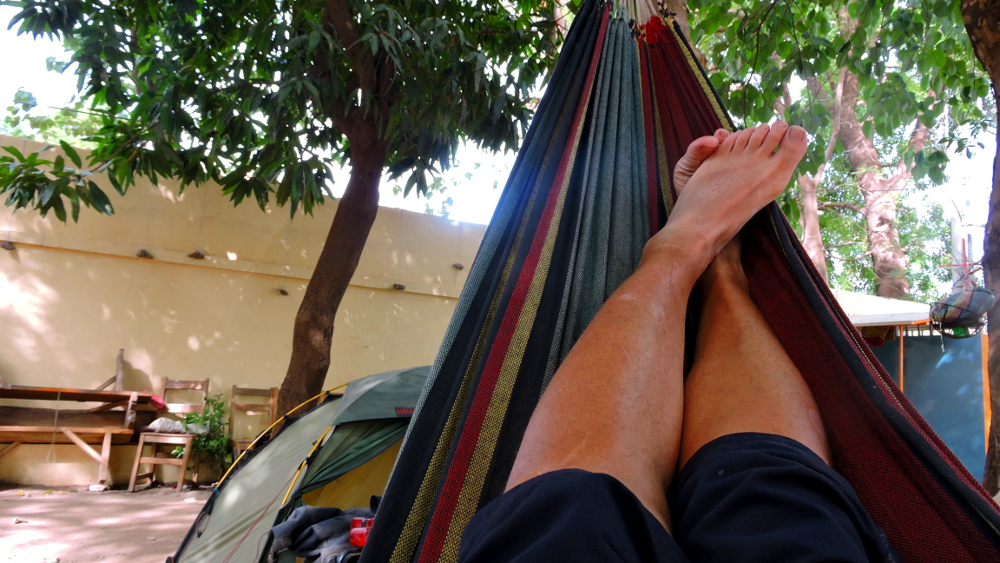 not only sleeping camels, nice place to hang around

At lunch time and in the evening, and at any other time when the German and English teams played (Euro 2016 soccer cup), the place was crowded. It seemed that this hostel was well liked with European expats.

Therefore, it would be a target for an attack, especially because the highly fortified German embassy was right next door. Therefore, no photo of the hostel. On the outside of the embassy there were signs “no photos allowed”.

I spent five days going to embassies to get my visa. And of course to the DHL office for my credit card.

Before I arrived in Bamako, I had received a message from the DHL office that mail had arrived for me. On Monday, I collected the PIN for the new credit card. Then the bank dispatched the credit card. Wednesday it was there. Wow! And I had waited for two weeks in Conakry where it still hadn’t arrived.

The visa for Burkina Faso was no problem and I got it after a few hours. The visit to the embassy of Ghana was much more pleasant than previously and the staff were in listening mode.

Usually one needs to be in one’s country of residence to obtain a visa for Ghana. I couldn’t get the visa in Germany because it would only valid for three months and I had left Germany six months ago.

I had already obtained a letter of invitation from a Ghanaian organization. I had to deliver a handwritten letter in which I had to explain why I wanted to obtain a visa. I could fetch it the next day. I was very happy: two visas and a credit card.

Back at the hostel, the only other traveler Reuben, who toured by motor bike, said he’d go to the embassy of Nigeria. Apparently, this was the easiest place to obtain their visa. I joined him, filled in the forms, and got the visa.

Bamako was a big hit!

On Saturday morning, I left the city in southerly direction. 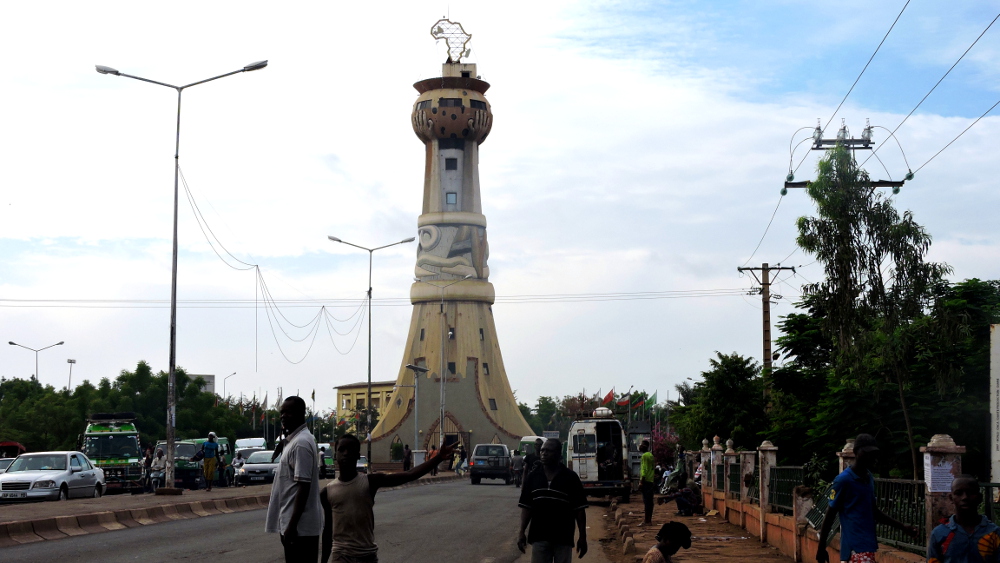 tower getting out of Bamako

I would have been interested to visit the Dogon region in the north of the country but my guardian angel was already doing overtime.

Best to reach Burkina Faso as quickly as possible and next to full rivers. 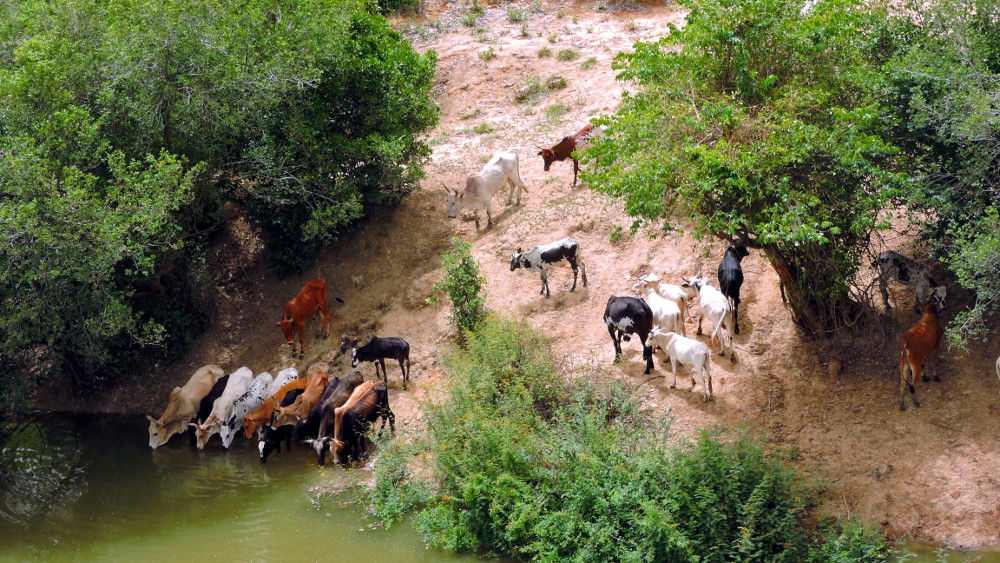 Animals and people were happy. In Bamako there had been two light showers. Back on the bike the sun was shining.

The roads were incredible, the traffic alright, the temperatures perfect, everything just right for cycling.

It would have been very annoying if my passport with all the visa and my new credit card would be stolen and I was ruminating how I could hide my treasures when I young man chased after me with my sunglasses. I must have left it somewhere and there I was wondering if anything got stolen.

There was a toll booth after Bougouri and then there were only mopeds and cyclists on the road. One or two touring busses and the giant jeeps of the development agencies, led by the UN, which sped through the villages.

The population lived in round huts like in Guinea but with a pointed roof. 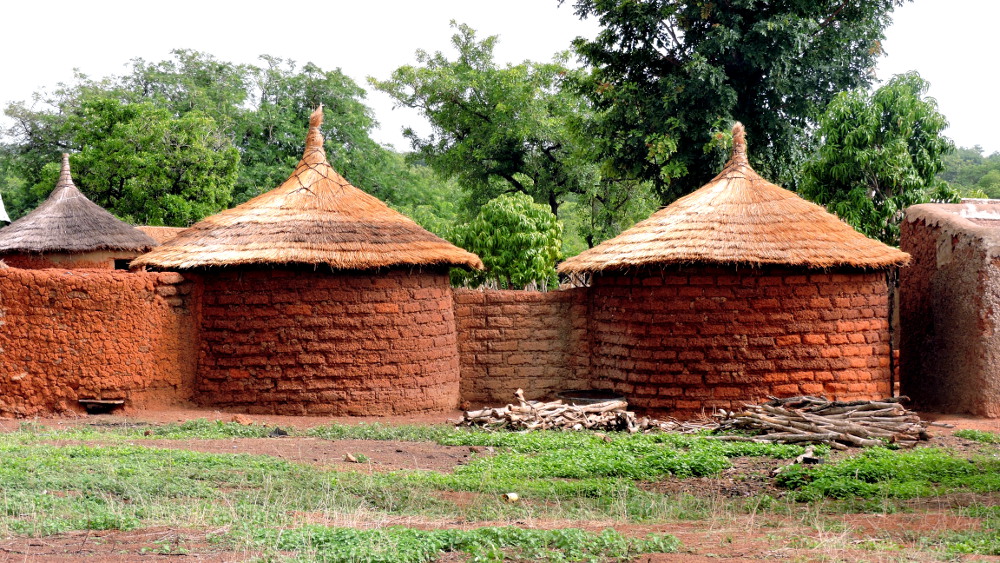 In the evenings I liked to stay at a “Centre de Santé”. 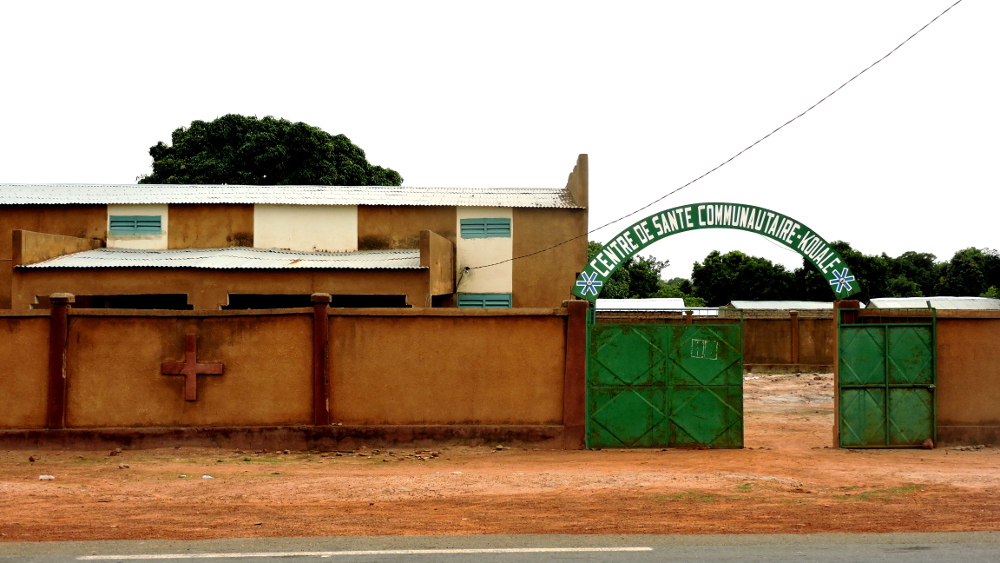 good place for camping: the yard of “centre de sante”

I felt safe behind these walls, found a roof under which I could pitch my tent, and should I wake up with malaria, I was in the right place. It hadn’t rained a lot and I stayed healthy.

Usually there was just one doctor and he seemed to be on call 24/7. He was always there, even when the phone rang at night. At one of the centers, a female doctor lived next door, and after the hospital closed, she sold food in front of her house. One morning, before 6:00 am, she suddenly appeared in her petticoat, to treat the first emergency patient. She had told me the evening before that he shift would start at 8:00 am.

In an effort to improve the health situation, some organization tried to improve hygiene.

arrangements to improve hygiene in Mali

The further east I traveled, the hillier it got. 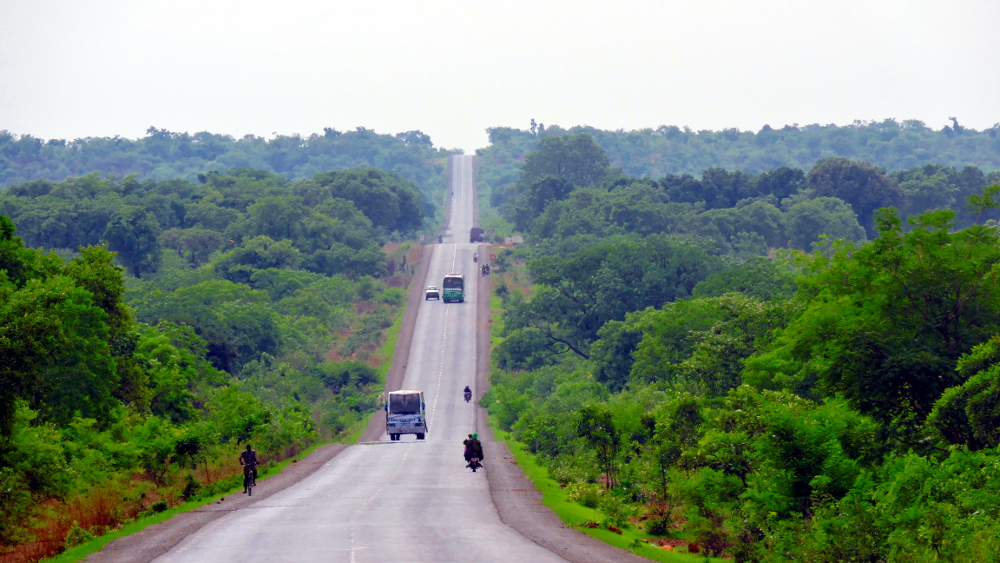 Surprisingly there was traffic because normally the roads were empty. Thanks to tailwinds I made good progress and it wasn’t too difficult.

It was amazing that I found shady places for a break. Usually they stayed quiet for the next hour 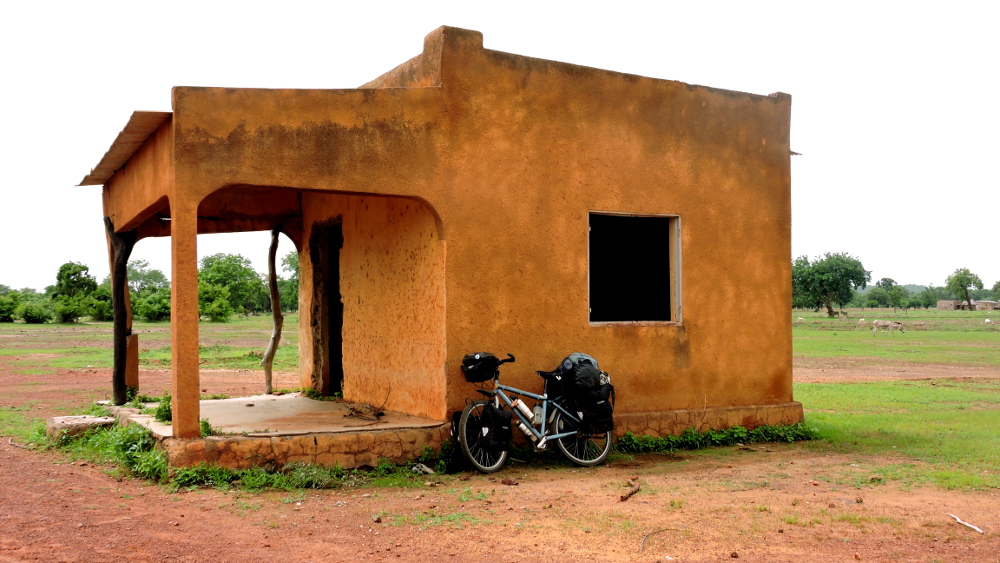 nice place for a rest

Every once in a while, someone came by and then left again. 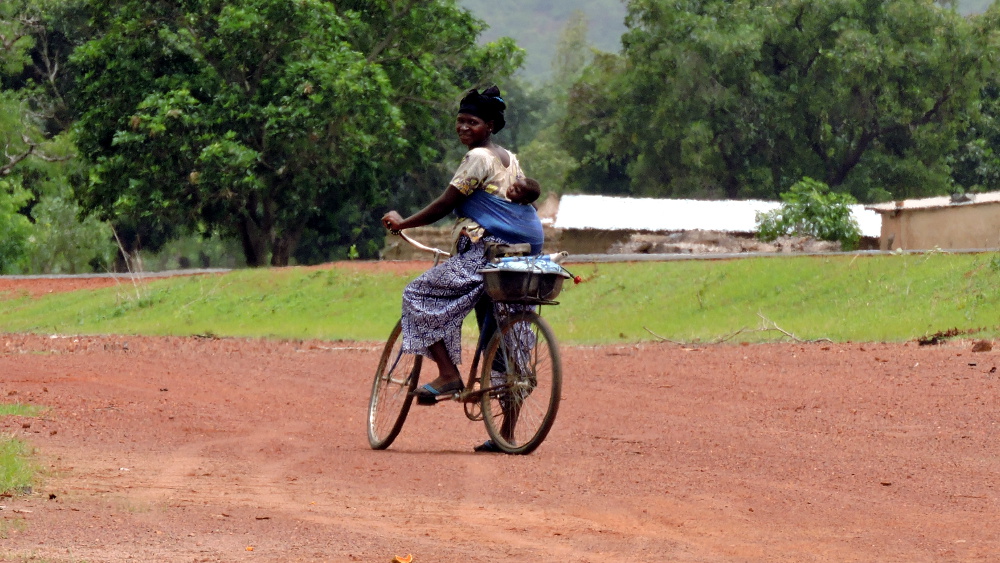 no worries about child seat or trailer

No worries if the kiddies seat should be in front, back or in a trailer. As always, the kid was bound to the back and off they went.

I met my first fellow cyclists since Morocco. Adil from Morocco 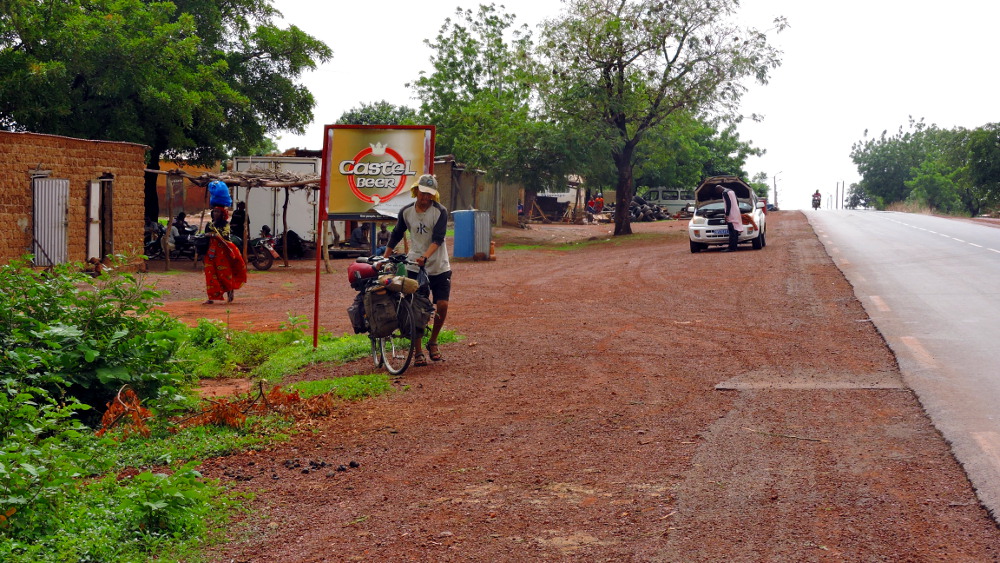 A real adventure cyclist who unfortunately had caught malaria. He wanted to continue through Niger and Chad and I let him continue on his own.

Before I tackled the last stretch of Mali, I stopped for half a day in Sikasso.

It remained hilly and green and traffic came to a complete standstill. 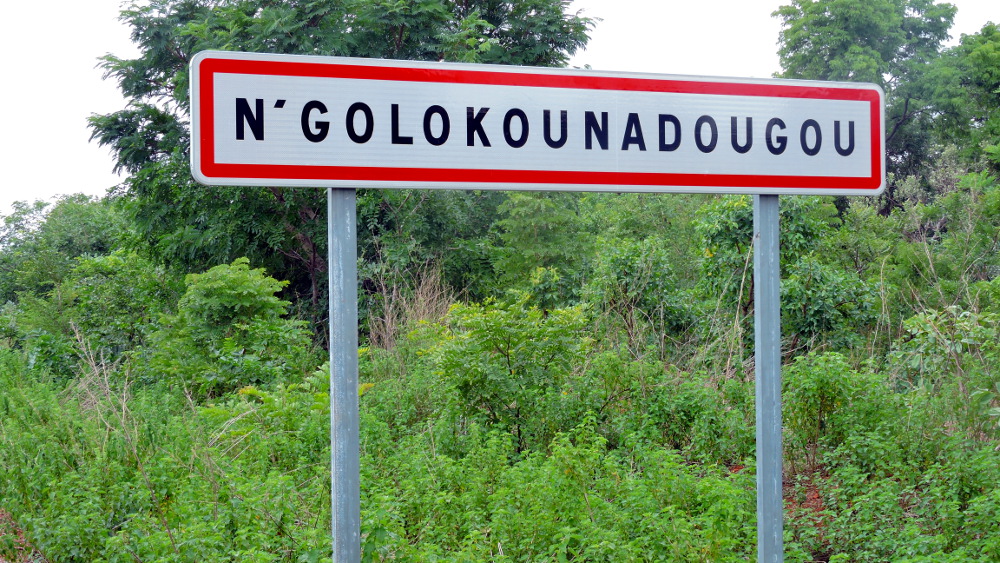 Once the problems in the country have been resolved, Mali would be a fantastic country for traveling. However as long as the German Foreign Office has issued a travel advisory, I didn’t want to recommend it.

This time of year, June, beginning of the rainy season, was ideal. It wasn’t so hot and everything was beautifully green. And mango season is a treat!

I stayed twelve days in the country and biked 666 kilometers.

Next time I tell you about Burkina Faso

And as always, I look forward to your comments.