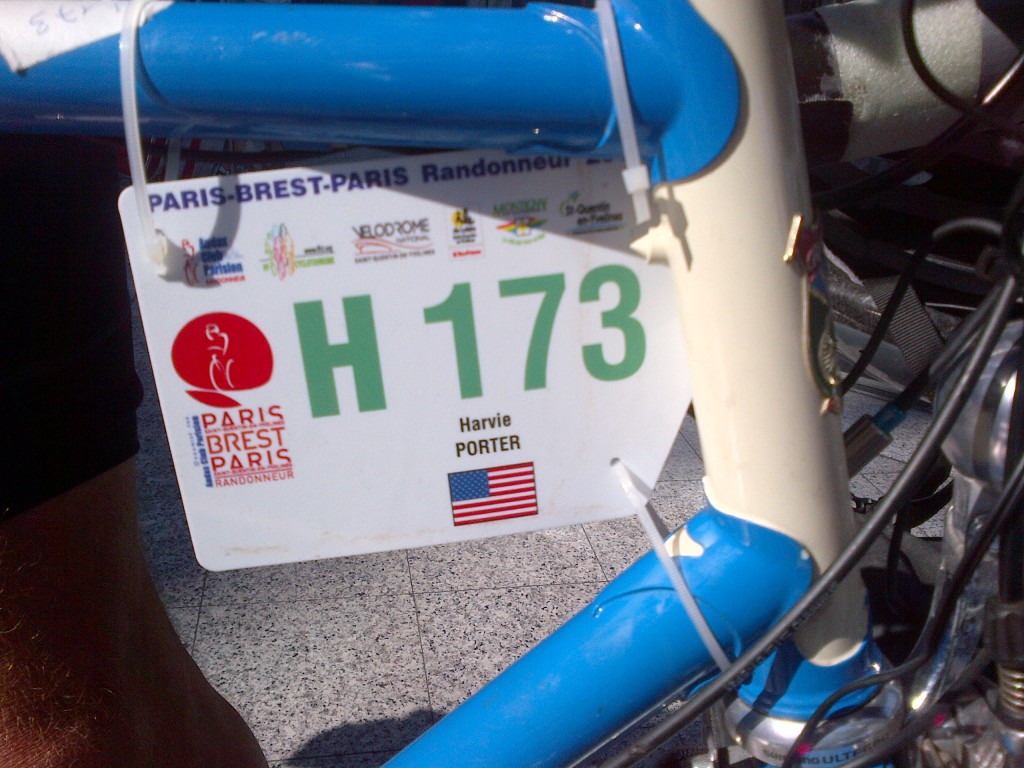 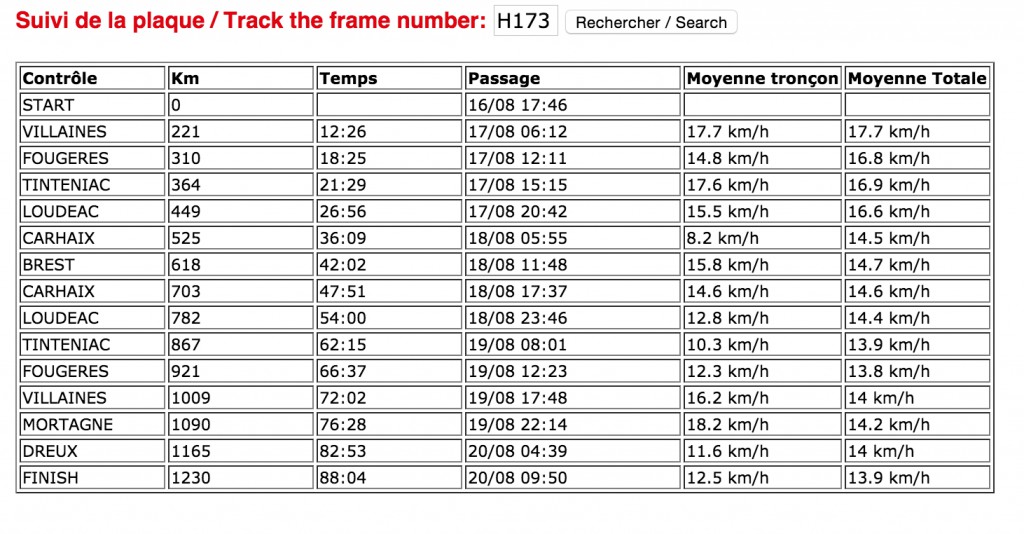 On Thursday morning Harvie finished in Paris, on Saturday afternoon I met him in Strasbourg. Without a sign of a major endeavour, he just smiled.

I wanted to know, if he doesn’t feel still exhausted.

Paris – Brest – Paris are 1,200 km. In Brest, after 618 km is the turning point. Earlier it was a bicycle race for professionals, then it became an amateur sports event. There is the Paris-Brest-Paris (PBP) „certification“(brevet) and the PBP „Audax“, one every 4 years, the other every 5 years. From what I understand, it differs only in that at PBP there are  single cyclists, with their own speed, but with a time limit. At the Audax are groups with ten cyclists with  22.5 km / h minimum. Both events are organized by the “Audax Club Parisien“.

Harvie raced in 88 hours and four minutes from Paris to Brest and back again. If you are wondering about the low average speed (14 km / h), you have to consider the „non-cycling time“, the time he spent in a queue to get food or a place to sleep and the duration of the sleep, is also included.

How did you get prepared for this event? How much do you train per week?

“I tried with limited success to ride on an indoor trainer last winter. I found it boring and it was hard to stay motivated. In February, I used my school vacation week get some training by cycling from central New Jersey to Washington DC. Temperatures were cold (-3 to 4° C), but the weather was clear with only one morning of snow. At least it was much warmer than Vermont!

When the weather warmed up enough in Vermont, I started doing short rides during the week and longer rides on the weekend. To qualify for Paris-Brest-Paris, I had to do brevets of 200,300,400, and 600 km. These rides began in April and I occurred about three weeks apart. On the weekends without a brevet, I tried to get in a long ride increasing from around 120 km to 160 km. I did two of the 600 km brevets. One was flat in New Jersey, so I could finish my qualifying, and the other was a hilly ride in New England that I did for training. The New England 600 was particularly tough as it rained hard for 18 of the 40 hours we had to cycle.

Once school finished in early June, I was able to train more, but probably didn’t ride much more than 300 km in a week, with the emphasis on doing at least one 160+ km ride each week. I did do a long two day ride from my house to Montreal. I rode 280 km to Montreal the first day and returned the next. The first week I arrived in Europe, I bicycled from Frankfurt to Lyon via Stuttgart, Lindau, Zug and Neuchatel. I trained hard during this section, travelling between 90 and 210 km each day, with one day rest in Switzerland. I then rested a week before PBP began.”

Do you have a special diet? What have you eaten during the event?

“I didn’t have a special diet. I ate whatever food was available. During the event I mostly ate at the controls, where a variety of foods were available. I found towards the latter part of the trip that my appetite decreased and I looked for foods that were soft and easy to eat, for example, eggs or mashed potatoes. I started getting a craving for fresh milk and the day before finishing I drank a liter of milk on two occasions.”

Didn’t you want sometimes to slow down and have a look around?

Actually you split the big goal in many small ones. If you only see the big goal from start to finish, all he 1,200 km, you easily can loose track. If you split the route into parts, to the next support point, the distances are much shorter and much clearer. The first checkpoint was180 km away. Here you could buy something to eat or you got a place to sleep“

How much luggage did he carry?

“I had extra clothes, and a few spare parts. Fortunately, I never had a flat tire. I carried a mylar “space blanket” and a mylar sleeping bag. I never used the sleeping bag and the one time I used the blanket, I found I was not comfortable sleeping along the road, so I then only slept during the night either where cots were available or on the floor in a corner at a control. During the day I took naps at each control after determining how long I could nap and still reach the next control by the cut-off time. In addition I carried enough to eat for the day.“ 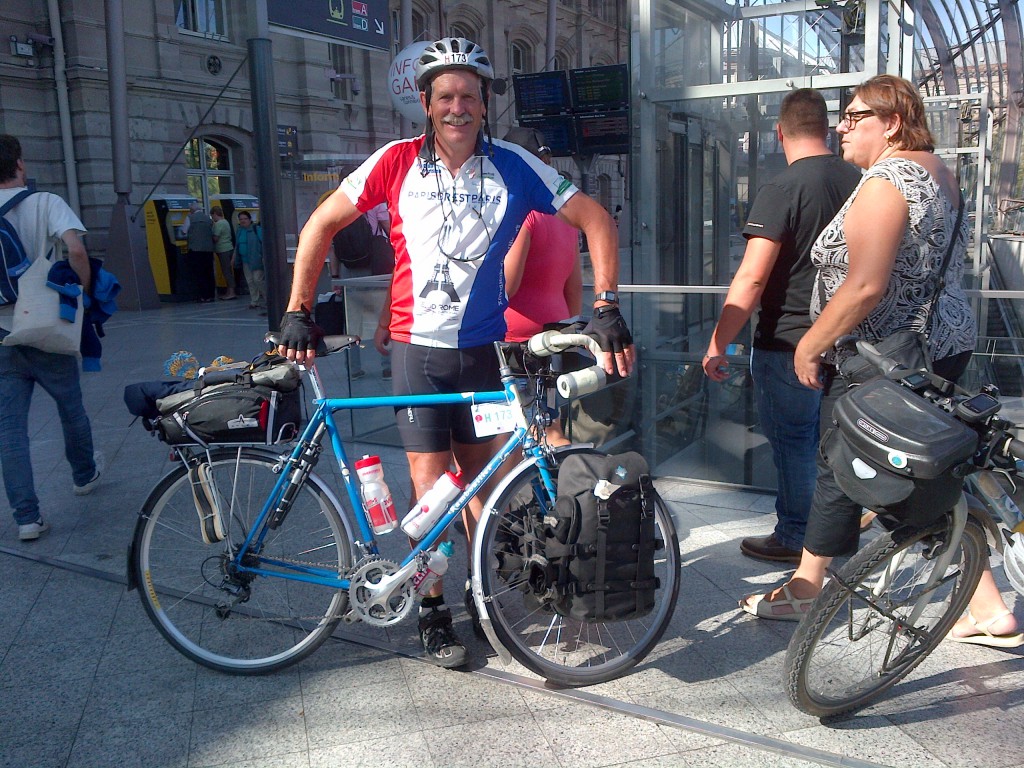 Also what he had in Strasbourg was very minimalist compared to my luggage when I travel by bicycle and with a tent. Two front panniers, a handle bar bag and a bag on the rear rack. During the brevet he had no front panniers.

Where did you get your certificates?

“I rode the two brevets in New Jersey (NJ), 400 km and 600 km, for two reasons. Firstly, the brevets were earlier in the season. If I had difficulty finishing either of those brevets, I would still have another opportunity to do those distances here in New England. Secondly, the area where the brevets were held in NJ was flat, making it more likely to complete the distances in the required time.“.

Is the Brevet well know in the United States? I’ve heard about it the first time in Australia. In Germany I don’t know anybody who is doing something like that. Probably also in the US it is only known in small circles, like everywhere.

Also Harvie heard about it by chance during a trip to Nova Scotia. Even in Paris, only one person talked to him, wearing his Paris – Brest – Paris Shirt.

Apart from the fact that in summer only tourists are in Paris, you can assume even there only a small group knows about the Brevet“.

Apparently in the US there are also only a few “insiders”.

How did you get into cycling?

“Actually I am always riding my bike. When I arrived at college, I was the only one in my dormitory who had a bicycle. Later more and more students had bicycles. “

Harvie was a teacher in Vermont, in the northeast of the United States. It looks similar like in the Black Forest.

„But you also have snow in Vermont” –

“Yes, but if there is snow, we don’t have to got to school.”

His first long bike trip was in 1975 in Europe, 12,000 km. Nothing to compare with a bike ride today, because there were, as far as I can remember, no bike paths, let alone Routes “Euro Velo”. Harvie is always touring with a compass, he always finds the place, where he wants to go to. but not always on the shortest route. On this way he discovered some very beautiful areas, where he would otherwise never got to.

1980 he cycled around the world. Amazing, I am sure, he certainly haven’t met so many cyclists as I nowadays. (Maybe I can convince him to write for my “Damals” project :-))

I could hardly believe what he told about Java. He has the most beautiful memories about it, there was no pollution and noise.

2009 it was a miracle for me that I survived the overpopulated island. 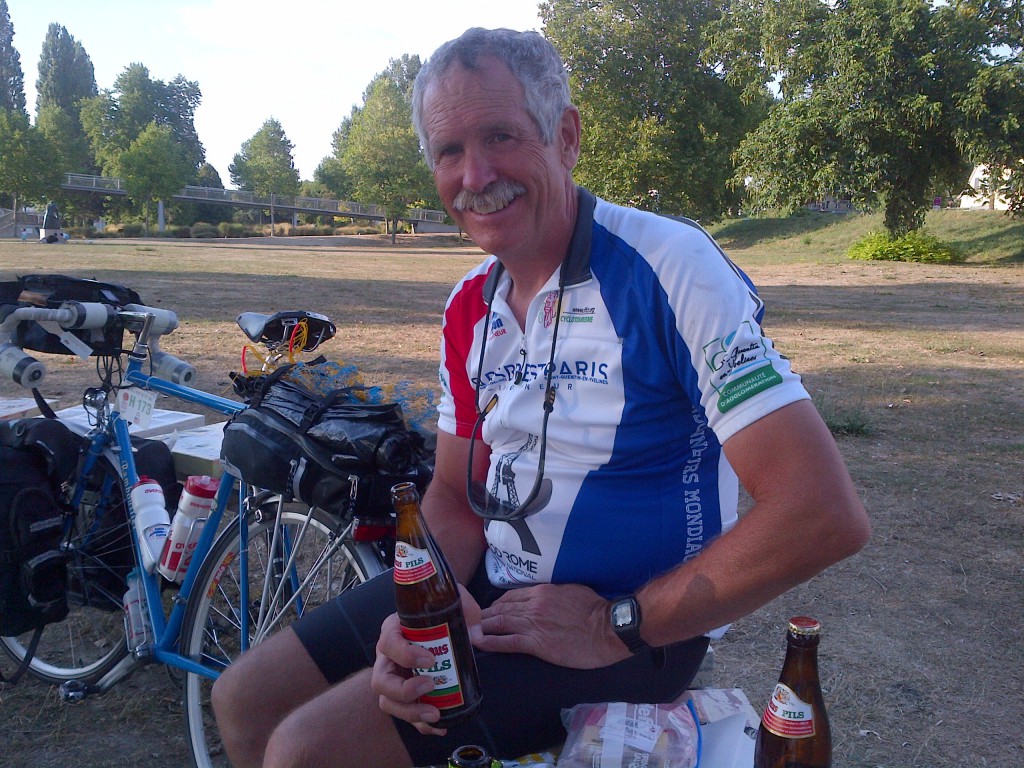 At the end I wanted to know what was kind of tip he would give to today’s young people:

„Be a good person, for others especially. An be true to yourself“.

Then we continued with the relaxing part of the evening.

I wish Harvie much success, fun and fantastic adventures with his other activities.