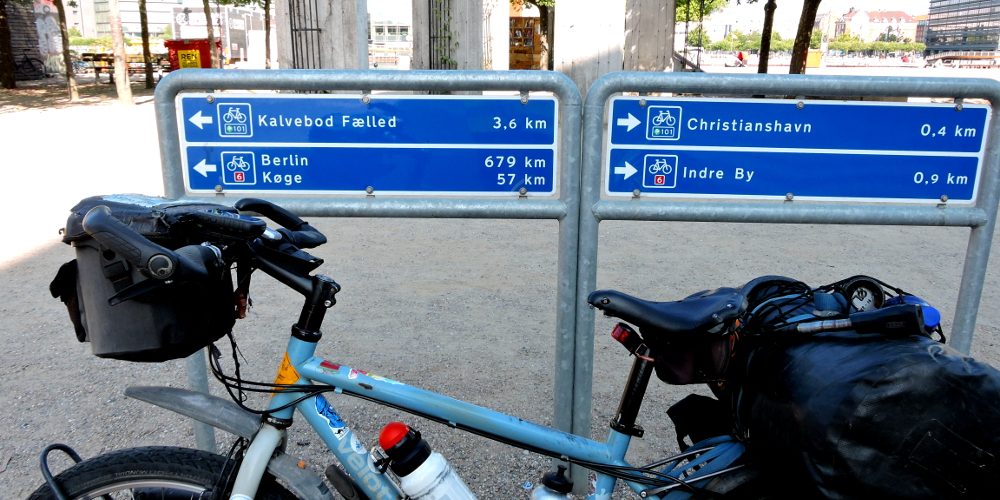 Denmark, the last country before I was back in Germany. Once again, I didn’t know what to expect. Reports about the country, especially when it came to cycling, were always positive. Was it justified?

Helsingborg (Sweden) and Helsingør (Denmark) faced each other at the narrowest part of the Öresund (part of the Baltic Sea). Only four kilometers separated them. The crossing was too short to recharge all my electronics.

Denmark also didn’t use the Euro but I quickly found a currency exchange. Now I had Danish Kronen in my pockets and I zapped through the alleys 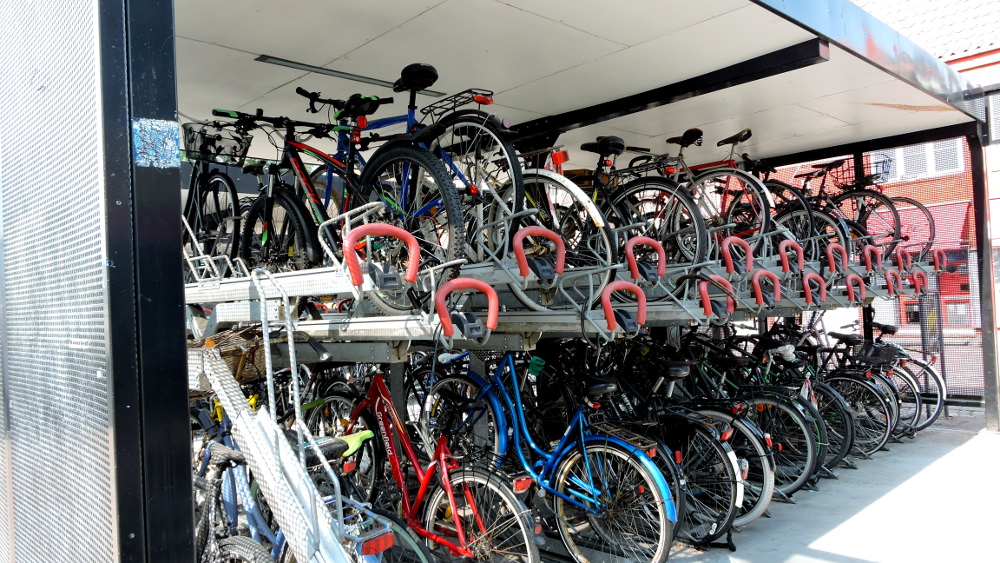 Opinions differ whether Denmark belongs to Scandinavia or not. At first glance, I’d say: No! Houses and streets were different than in Sweden and Finland. 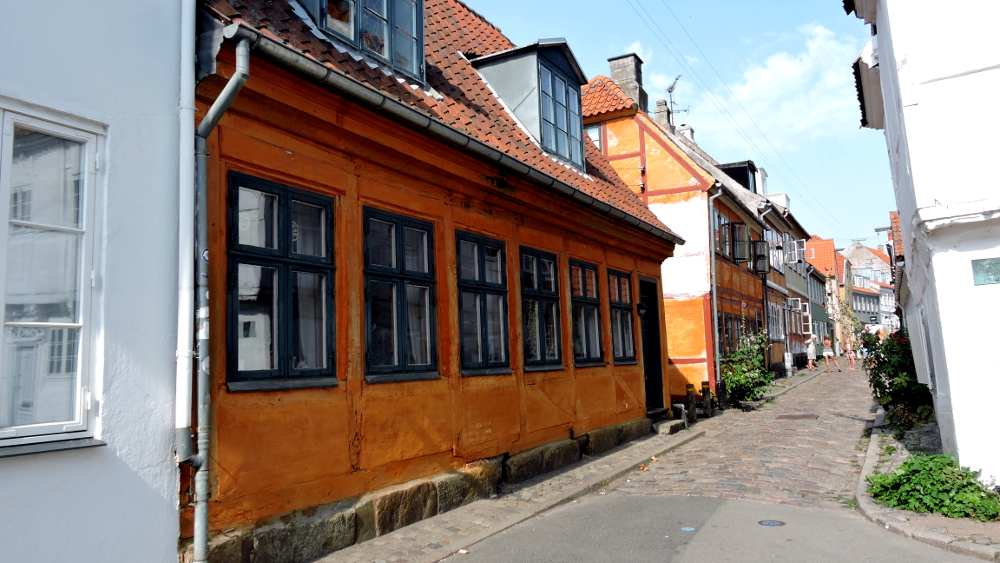 Of course, there were lots of marked long-distance bike touring trails. I could simply have followed the Nr 9 which led directly to Copenhagen. Instead I took the road which followed the coastline.

Between Helsingør and Copenhagen there was hardly any open space. One fancy villa followed the next. Those I wanted to see from the front. Of course, there were also very big cars on the road. Eventually I took the bike path.

Copenhagen was a different kind of adventure. There were lots of cyclists and the bike path was busier than the road. And the others biked  a lot faster than I did. Quickly I learnt about the advantage of hand signals. Before one stopped it was useful to raise one’s hand to avoid a pile up of twenty cyclists on the back carrier.

Without incidence I arrived at a camping ground which wasn’t far from the town’s center and could recover from first impressions.

Even bigger was the adventure when I headed downtown the next morning with my fully loaded bike. Countless cyclists were on their way to work and I had the impression of being in a velodrome. Well-dressed women with flying dresses and hair sped past me. I think there might be an advertised speed of about 20 kilometers per hour.

Some kids went to kindergarten by cargo bike, for example in Christiana bikes. When a “regular” bike overtook me, there was hardly enough space on the trail. When the bike path was built, they probably hadn’t factored in the cargo bikes, most of which now have a motor. The recommended distance for passing was 1,5 meters but with cargo bikes that was reduced to five centimeters.

I was happy when I had managed the longest part and could reduce the speed to my usual 15 kilometers per hour. 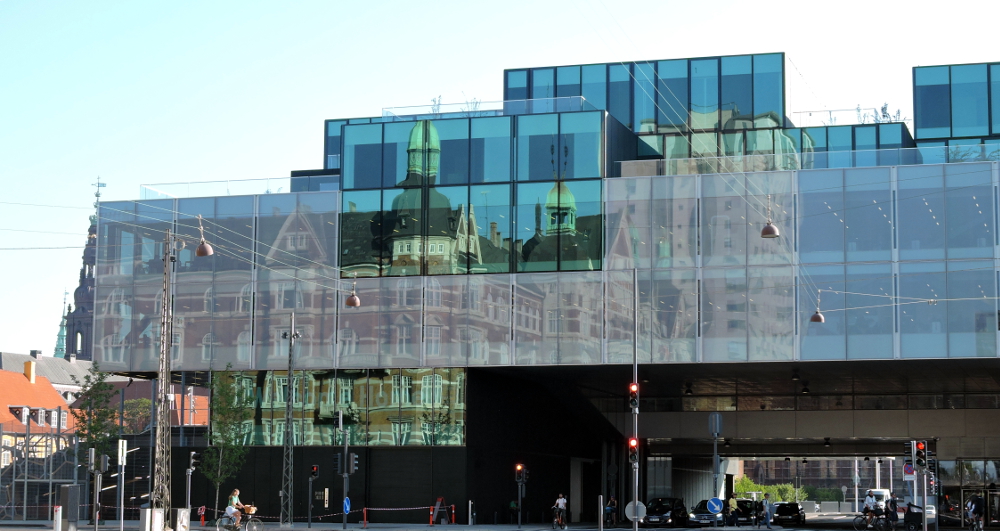 Now I was able to stop and take photos. Old and newer architecture was nicely blended. 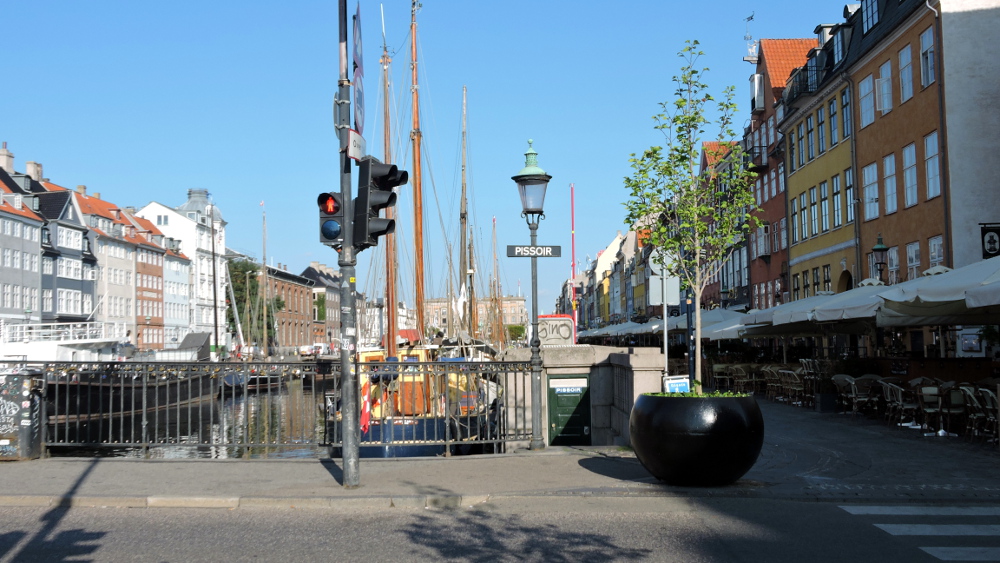 In addition, the roads and bike paths there were also waterways.

I wanted to see at least the Little Mermaid. 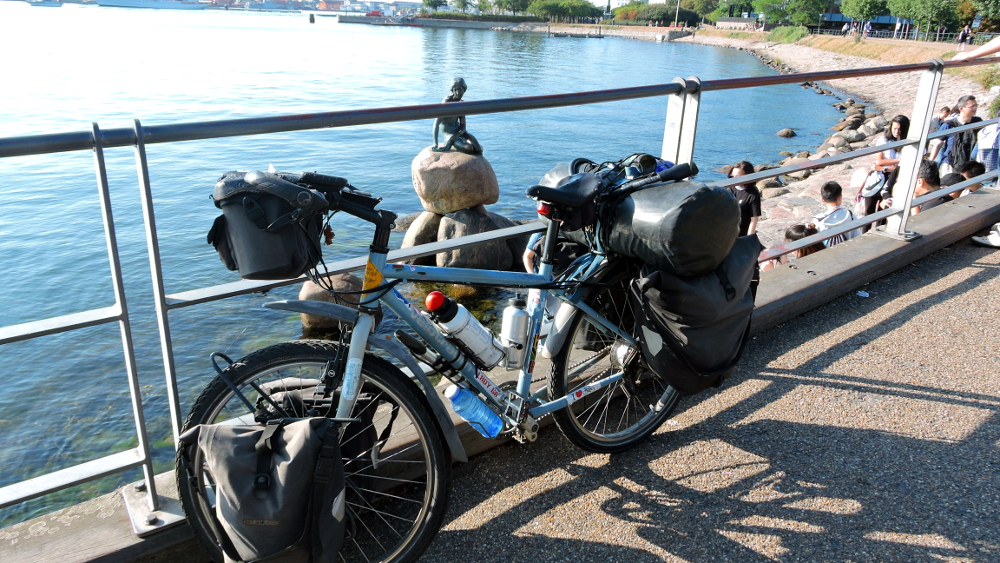 Fortunately, I knew ahead of time that it was a very small monument, otherwise I would have missed it. Even the Asian tourists were taller.

And Christiana was also on top of the list of things to seen. 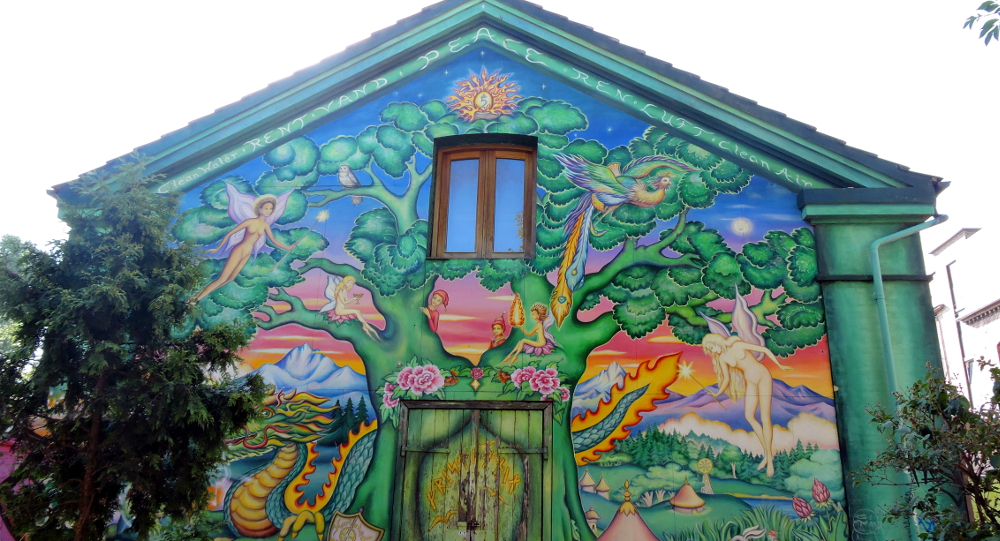 Around 1971, people with a vision took over the former military area. Now there is an autonomous city of 34 hectares in the middle of Copenhagen. They have their own rules, for example cars may only be used for transport in exceptional circumstance 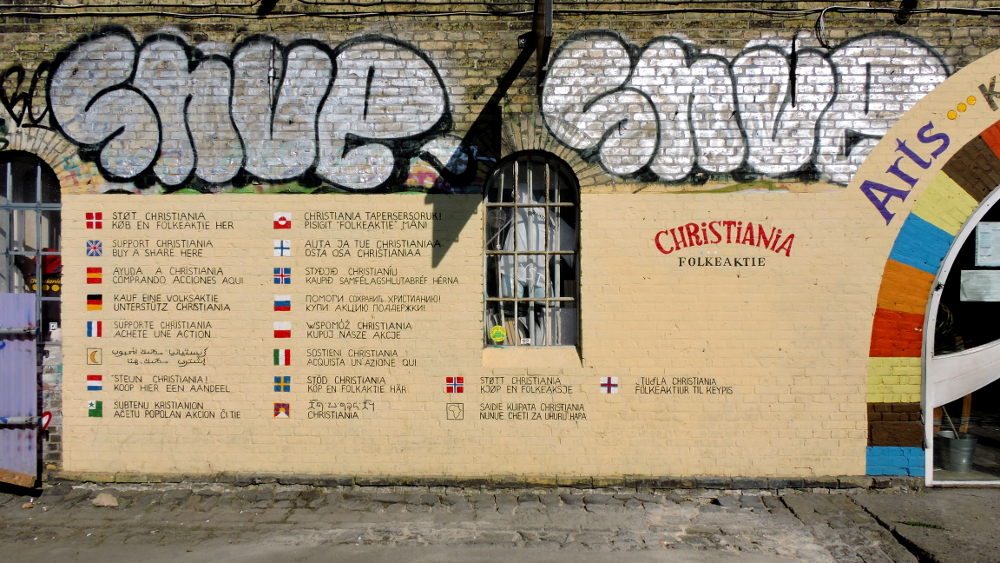 This is where the Christiana cargo bikes originated. Today they’re manufactured on Bornholm and are a fixture of the Copenhagen cityscape.

After I had cycled more than 30 kilometers through the city, I had seen enough 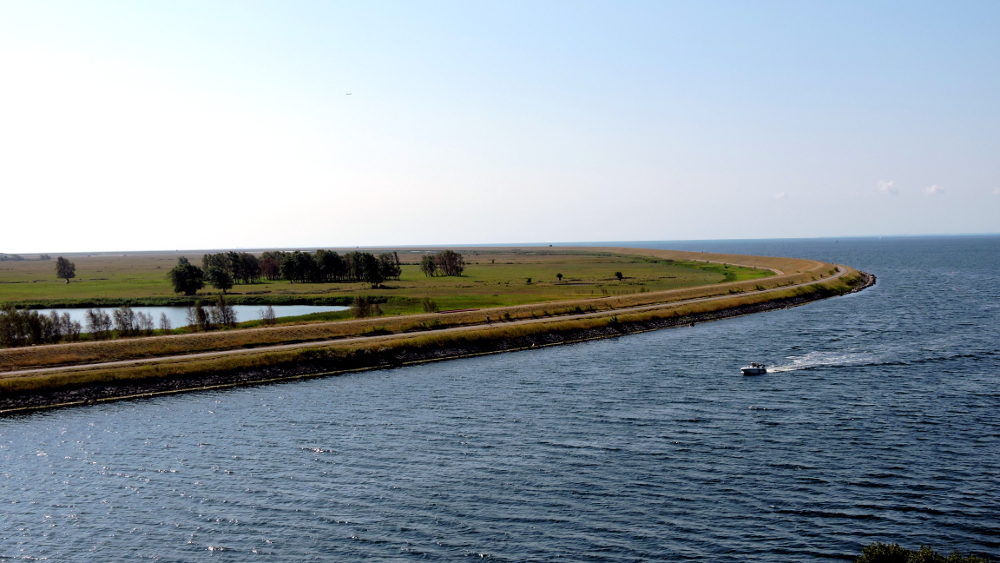 It didn’t take long to be back in nature, once I had left the city. First I biked between fields and through the forest and then beautifully along the beach. 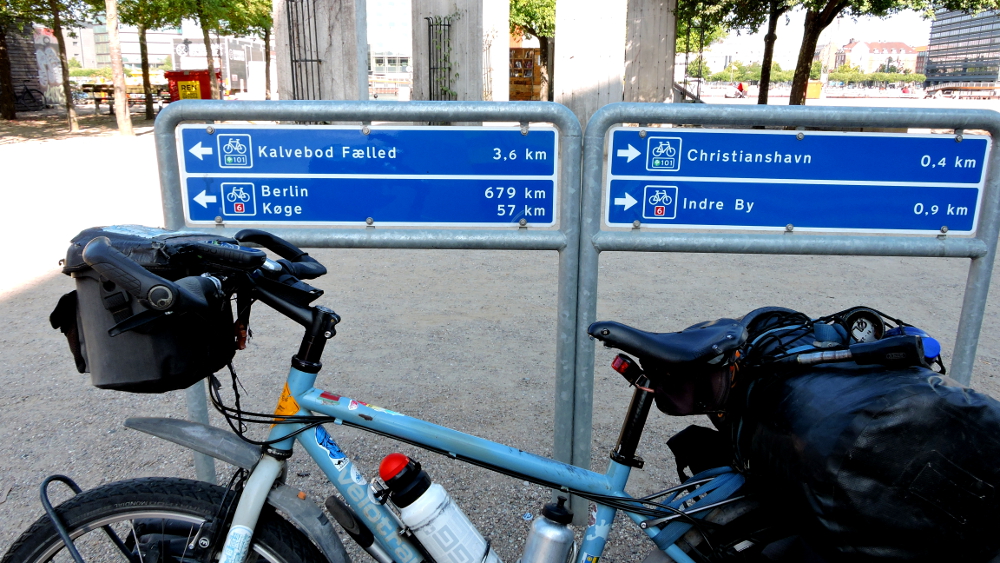 Once again, it was difficult to decide where to go and I opted to head south. 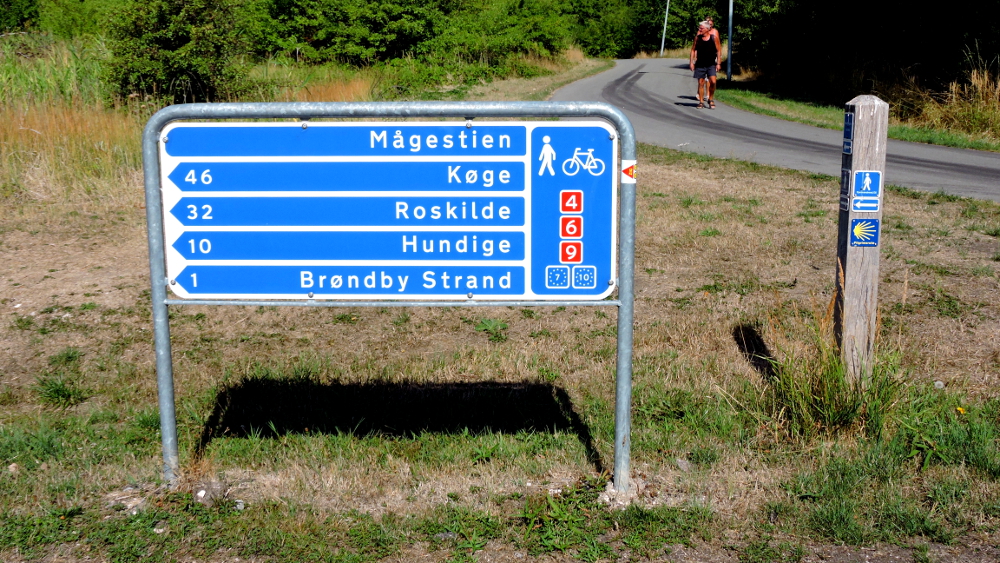 I was back on EuroVelo 10, the Baltic Sea Coastal Route, which I had left in Finland. Now it coincided with the Berlin-Copenhagen route and there were a lot of cyclists. Most of them, like the headwind, came towards me.

It was great to cycle through villages under a bright blue sky. 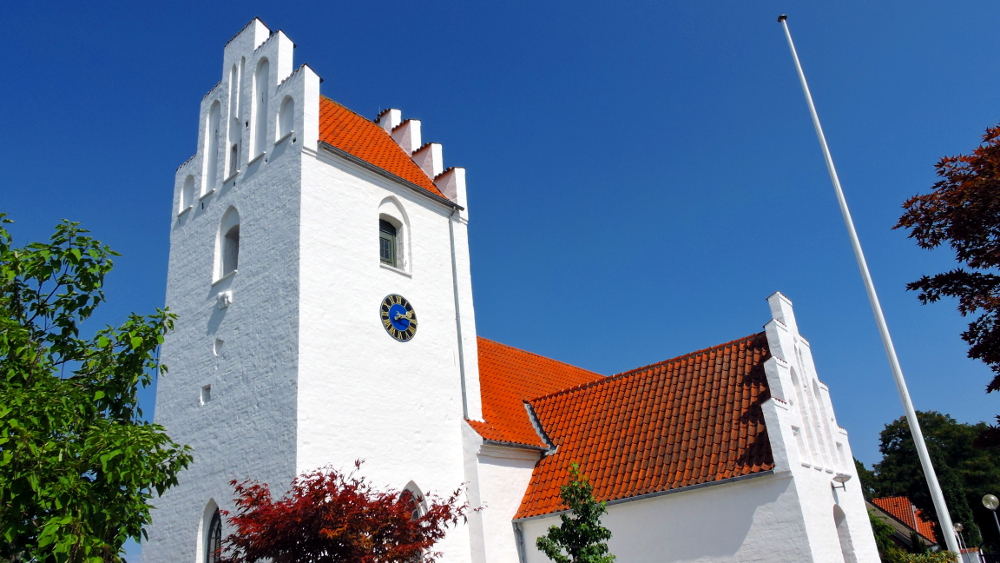 On this day, I passed through on larger town, Køge. 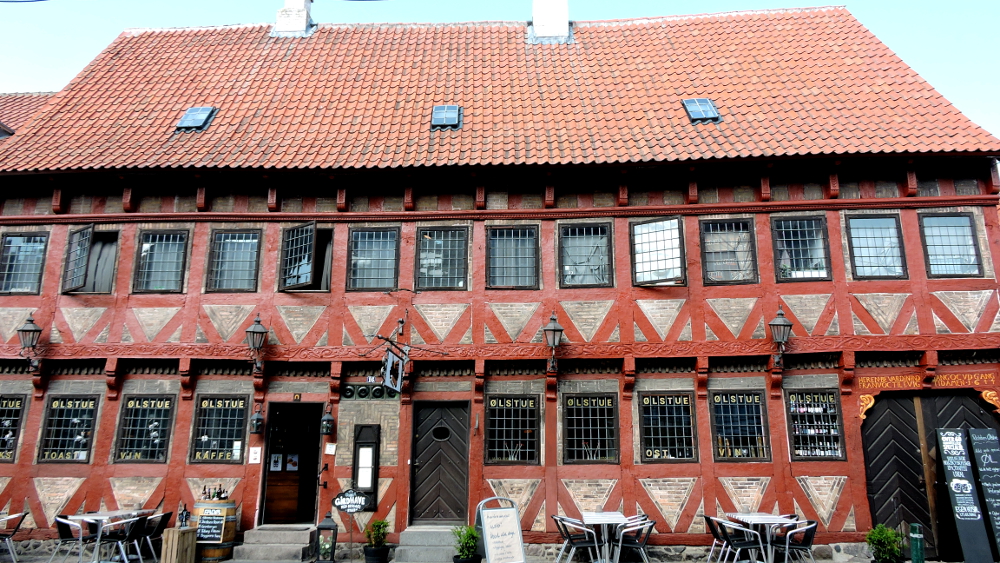 The town had been burned to the ground by the soldiers from Holstein in the 14th century and had again been ruined during the Danish-Swedish war in the 17th century but today it had the prettiest timbered houses in all of Denmark. 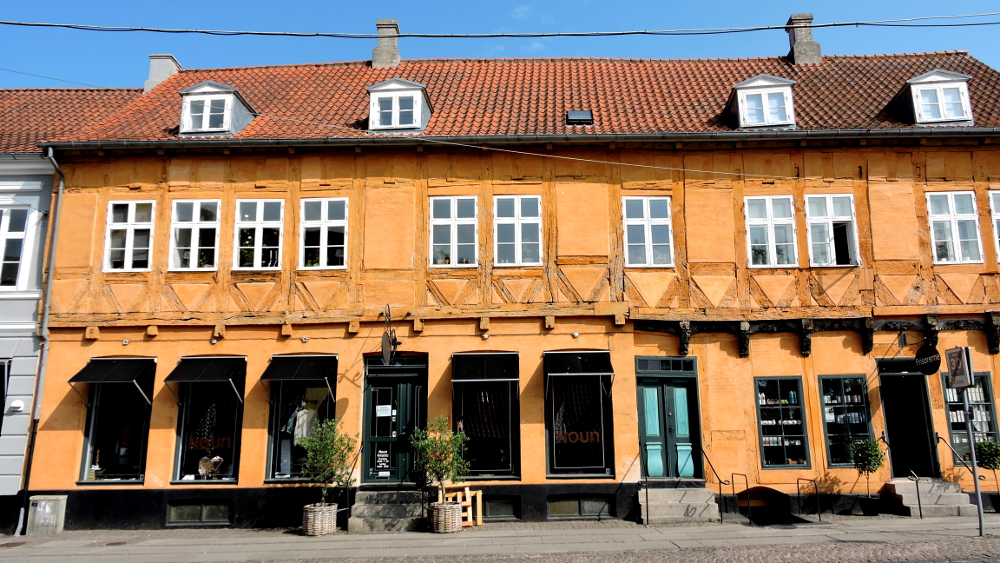 This attracted a lot of tourists and in addition to trade, tourism had become an important source of revenue. A scoop of ice-cream costed 25 Danish Kronen or 3.35 Euro which I thought was over the top.

I wanted to spend the night in a hikers’ hut in the forest. The road leading there was half blocked, “private road”. As I pondered whether to continue, an RV appeared behind me. It wanted to drive to a parking lot a few hundred meters ahead, to the “Holtug Kridbrud”. Did I know what a Holtug Kridbrud was? Never mind, I followed suit. 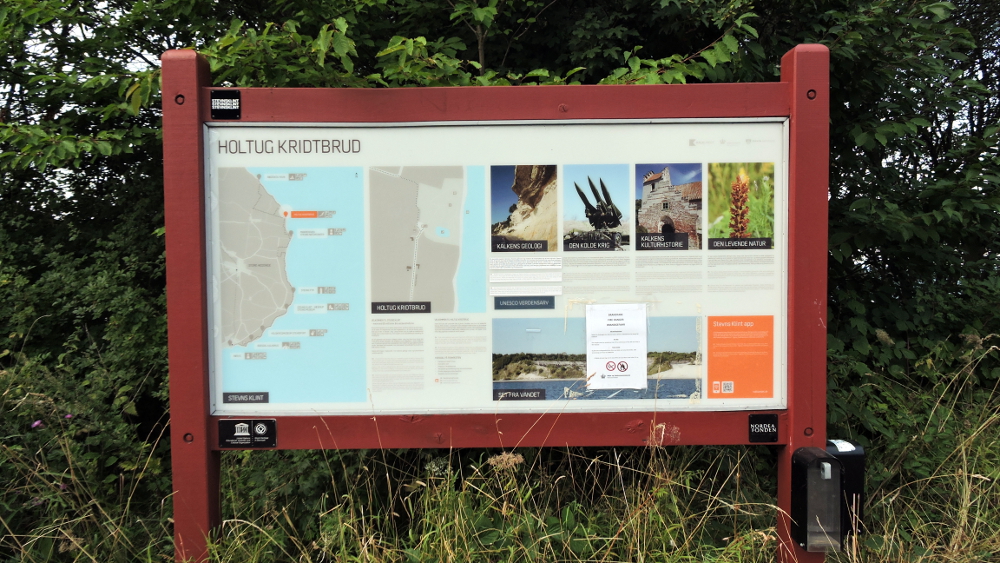 Again, I learnt something. Holtug was the name of the town which I had cycled through and Kridbrud was a place where chalk was mined. 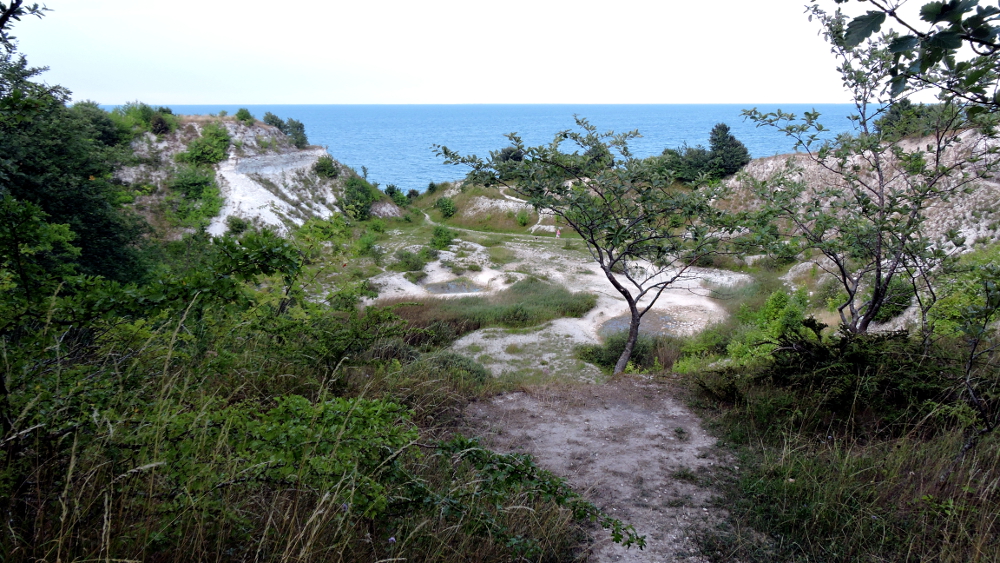 It was incredible. Right at the edge, I pitched my tent. There was a real toilet with light and water.

There was a complete ban to make fire and the nice elderly man from the RV brought me boiling water. He was a geologist and told me a lot of the area and its fossils.

And he said there was a weather warning for the next day for heavy storms in the west of Denmark. Here at Holtug Kridbrud it already started during the night. Fortunately, I had secured my tent well, otherwise it might have taken off. It stormed and there was thunder and lightning.

Thanks to the storm, my tent had dried off by morning. Thanks to the rain, I allowed myself to use the camping stove to make coffee. Only the storm, the headwinds, were a pain when I cycled.

It was an interesting area but I didn’t look around much. I stopped briefly at the Stevens fortress. During the Cold War this had been a very secret strategic point. There were underground passages of over one kilometer but I stopped only for a short time. I continued into the headwinds. I didn’t care too much for military outposts and had little interest in canons. But I thought it interesting that such an installation existed here.

Many happy cyclists came towards me, pushed along by tailwinds. Most were couples, a father/daughter team, two women, and one solo female cyclist. I asked one of the couples, how many had come from my direction. Short response: no one which wasn’t a surprise.

Thanks to the curves, I always had a straight on headwind. Only because of the forest cover, I was able to make any progress at all.

Around lunchtime fourteen couples headed my way. I wanted to have shelter from the wind during my break and stopped at a hikers’ refuge which was marvelous. 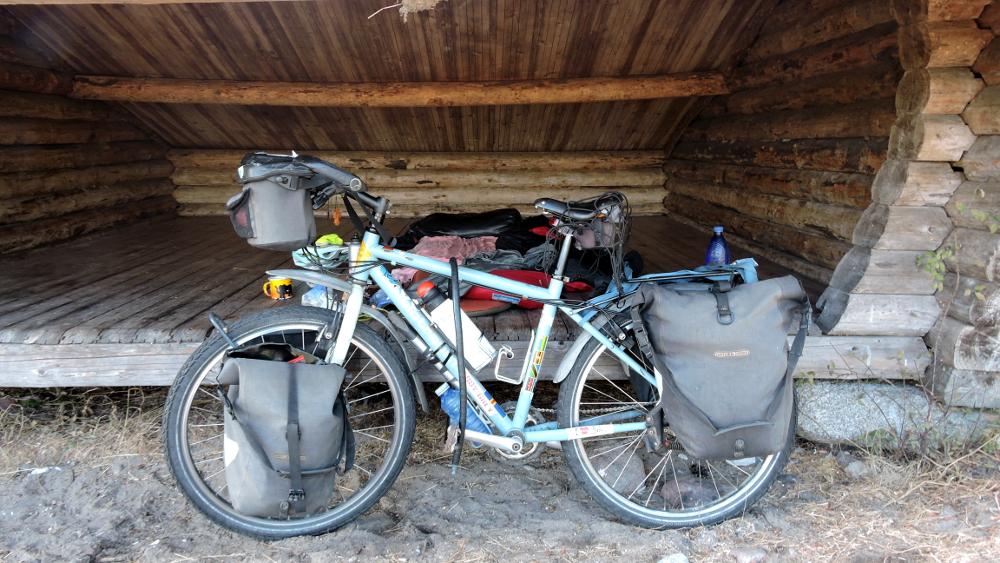 I really had only wanted to stop for lunch. Because it was very cold, I took out my sleeping bag and fell asleep. I only woke at 3:30 pm. That settled the question whether to stay or continue. Who was bothered by rain or storm, when one had such a lovely hut.

Unfortunately, the storm continued the next day but at least I had rested well. I was concerned when I came to a long bridge. 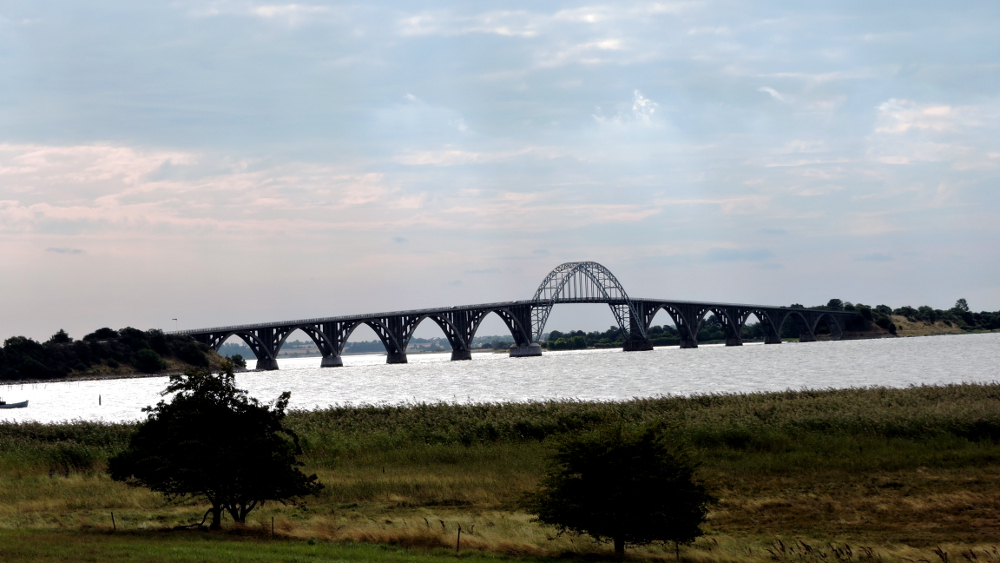 I had to make it across. At least the wind direction pushed me towards the lane and not out to sea.

It looked as if it might rain but for now it remained dry. It only started two kilometers before the ferry, where there was a shelter. 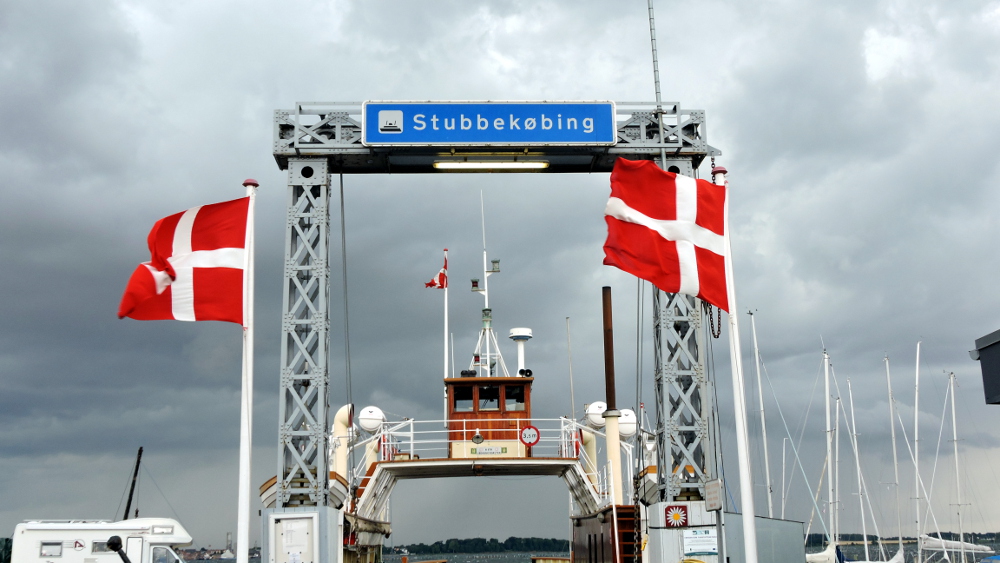 I arrived wet and had to wait 45 minutes. Break-eat-be cold. Outside it stormed and rained. I wondered whether the ferry would come but this weather probably wasn’t so unusual.

Once we had reached the other side, there was little rain and soon I could turn into a forest. Once again there was a wonderful hikers hut at a steep coastline. 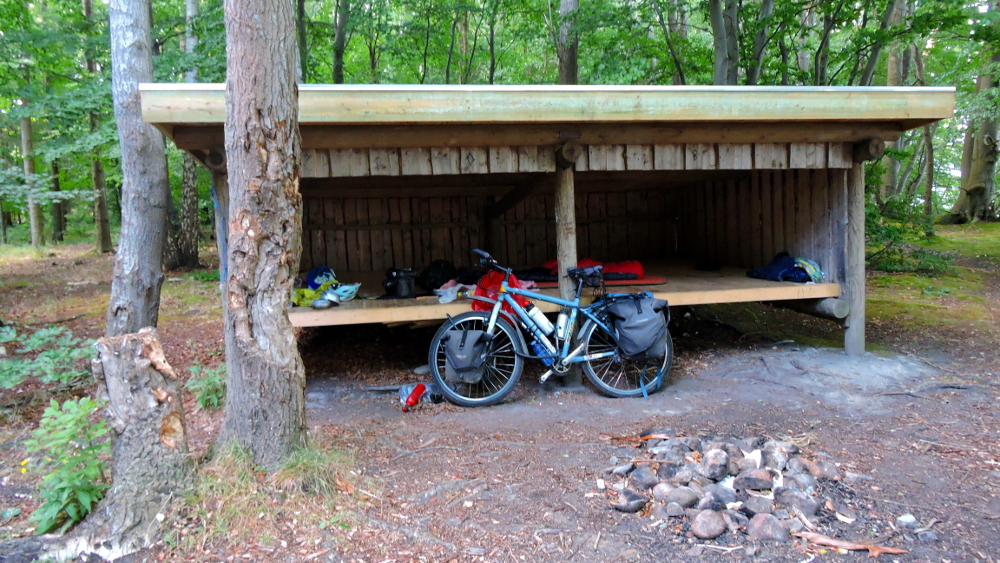 Ahead of me where a few trees and then the sea. The ground was covered in moss. Terrific! There was only the sound of the water and the leaves. Wonderful.

The bad weather had stopped the cyclists who came in the opposite direction. There was hardly anyone out there and I also wasn’t thrilled to continue.

I had used up the battery of my laptop the previous evening and therefore had a good reason to stop for a few hours at McDonalds in Nykobing: drink coffee, charge the battery, and use free WIFI to upload photos.

Afterwards I felt better. There was a bridge ahead of me. During this trip I had already seen two swing bridges but this one was different: 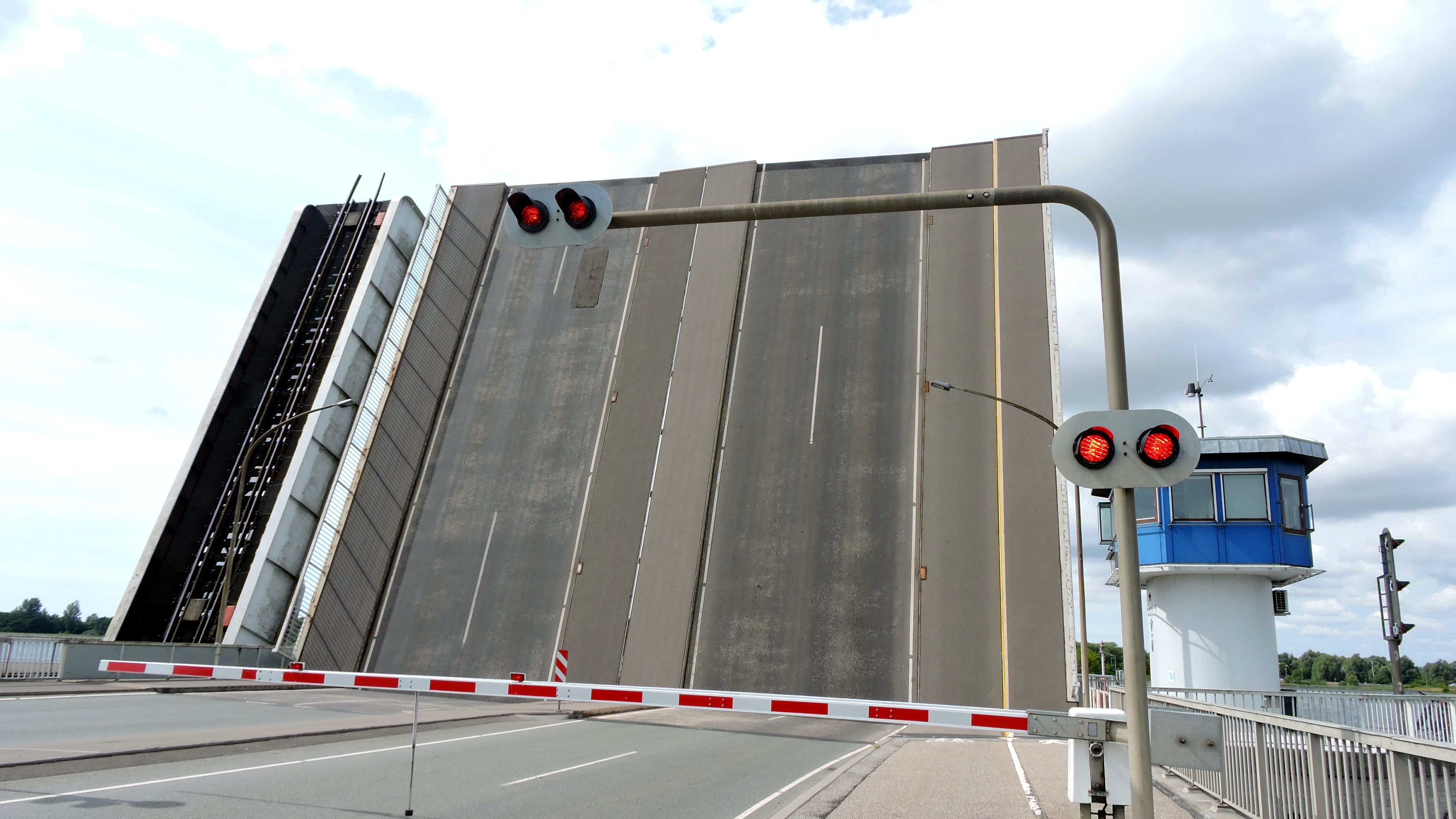 It looked as if the bridge might hit me in the face.

And then I arrived on my last Danish island, Lolland. It was very rural and once in a while, there was a castle-like building. 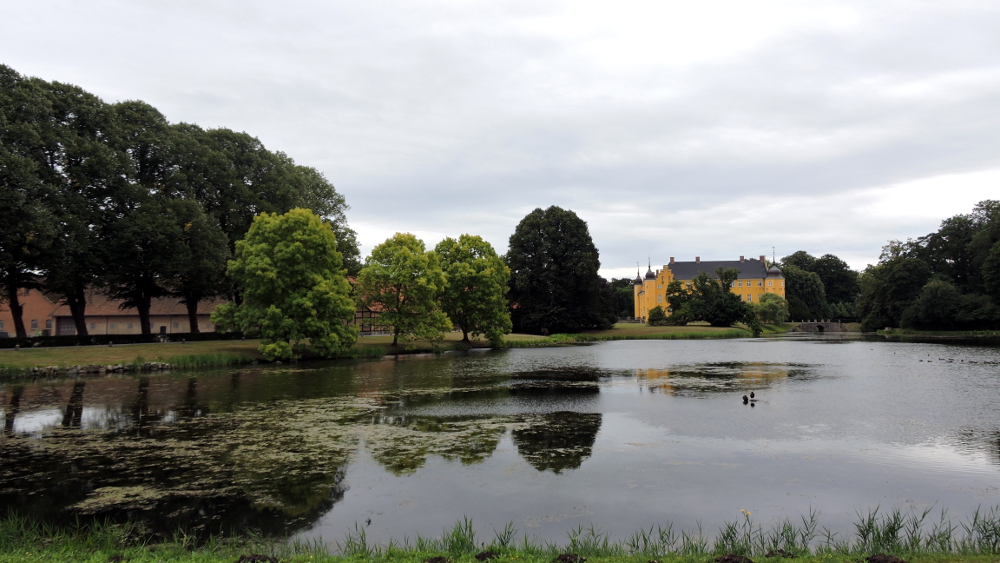 This was the historic estate of Krenkerup. In time before the next rain shower, I found another shelter. 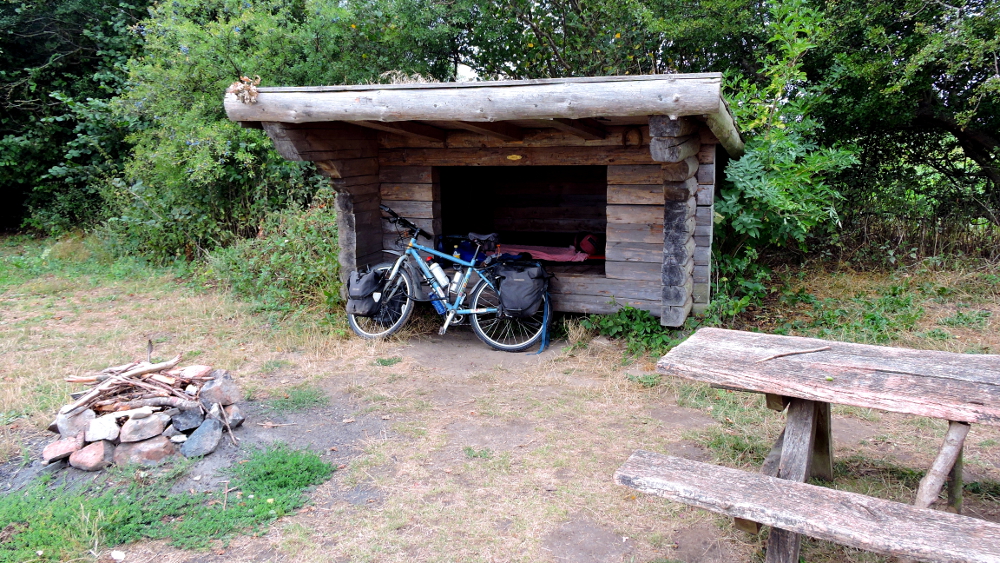 Fortunately, there were two such huts because in the evening a German family with children arrived.

This was how I spent my last evening in Denmark.

Now it was only a few kilometers to the ferry in Rødbyhavn from where I took the ferry to Fehrmarn, Germany.

I stop here for now. My next blog will be about the stretch from Fehmarn to Hamburg.

Denmark had done justice to its reputation for being a wonderful country for cyclists. I especially enjoyed the great shelters. Other countries should take note.