Startseite » Africa tour in English » Zambia, the northwest to Lusaka

Zambia, the northwest to Lusaka

After all the difficult countries from West Africa, Nigeria, Congo, and Angola, Zambia was promised to be an uncomplicated one. I was told that all roads were paved, every village had water and electricity. Everything would be better. Was it really the case?

Contrary to the other countries on this trip, I was issued the visa directly at the border. I didn’t want to think what would have happened if they had send me back, as had happened in Mali. Return the whole way? Impossible to contemplate.

Therefore, I was very relieved when the visa was in my passport. The official told me that one could get a visa on arrival at every border post. He didn’t often deal with tourists at this crossing. Not surprising, where would they come from?

He said, from now on everything would be fine. Only ten kilometers of unpaved road remained and afterwards all the roads would be paved. 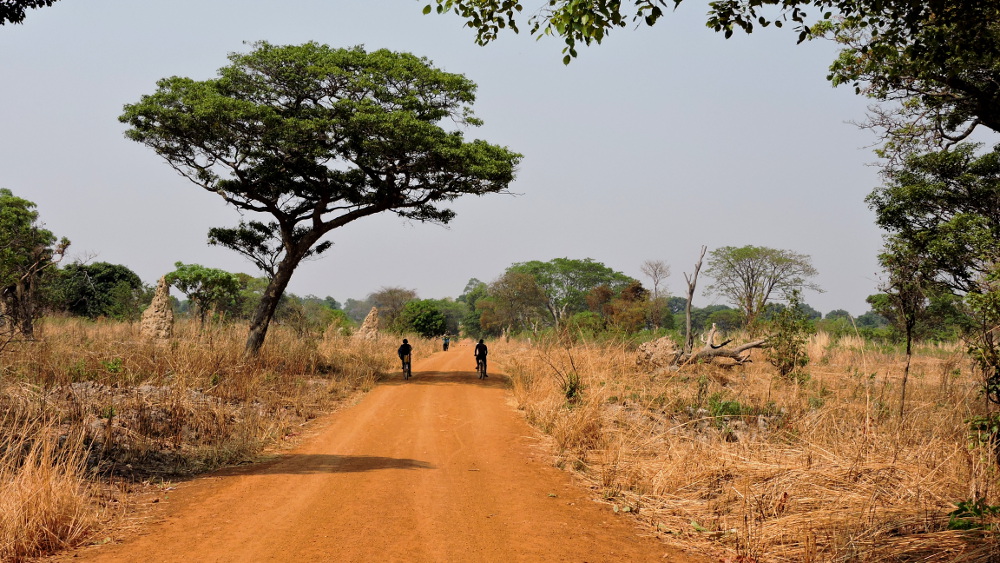 How much fun to be on my bike again! And there were even other cyclists.

Starting in Chavuma the roads were indeed tarmacked.

First, I wanted to get local currency, Kwatcha. Of course, there were no money changers at this border post.

Far outside the town there was a bank. However there was no ATM and they didn’t exchange money. I should try a shop in town.

There they exchanged only USD 50 and 100 bills. I only had USD 20 bills or smaller denominations. Nothing could be done.

Without money I made my way to Zambezi which was about 80 kilometers away.

Things had started well. I had hardly anything left to eat and I got water from a well.

I wanted to spend the night at a missionary station but the secondary road wasn’t paved. I asked a driver if the road would be very sandy. “No, no. It remains packed and easy to drive”. After two kilometers I was in stuck. 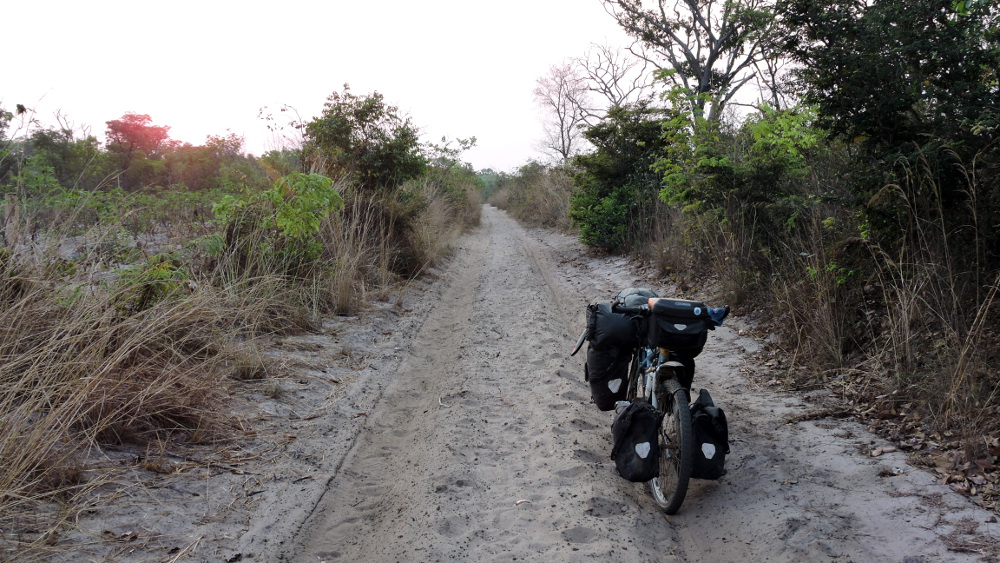 I really didn’t want to face this again and found a camping spot in this remote area. Next morning, I returned to the tarred road. 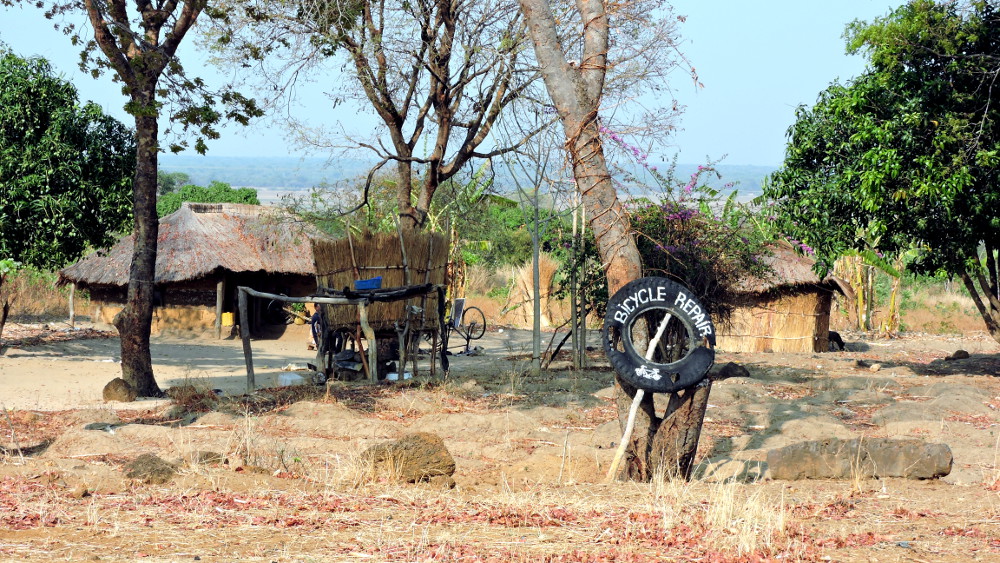 When was the last time I had seen a bike mechanic?

Saturday morning I arrived in Zambesi and my first stop was at the hospital. Promptly a young man named Josef asked how he could help. Poor him! He probably wouldn’t have asked if he had realized what he needed to do.

First, my wounds were cleaned and dressed. I noticed right away that there was water and electricity. The lights were on even so it was the middle of the day.

In the meantime, Josef called his friend at the bank. They were open and would exchange dollars.

With freshly dressed wounds I went hopefully to the bank.

Sadly they also only exchanged certain bills. I felt like crying! All my bills went through a scanner and only one five-dollar bill was accepted. That was even more aggravating. I was hungry and wanted to shop.

Maybe the young man at the bank felt sorry for me and decided to exchange a 20-dollar bill which had been rejected by the machine. In Zambia, USD 25 should last for a while.

First of all, I invited Josef to a coffee shop because he had spent several hours with me. 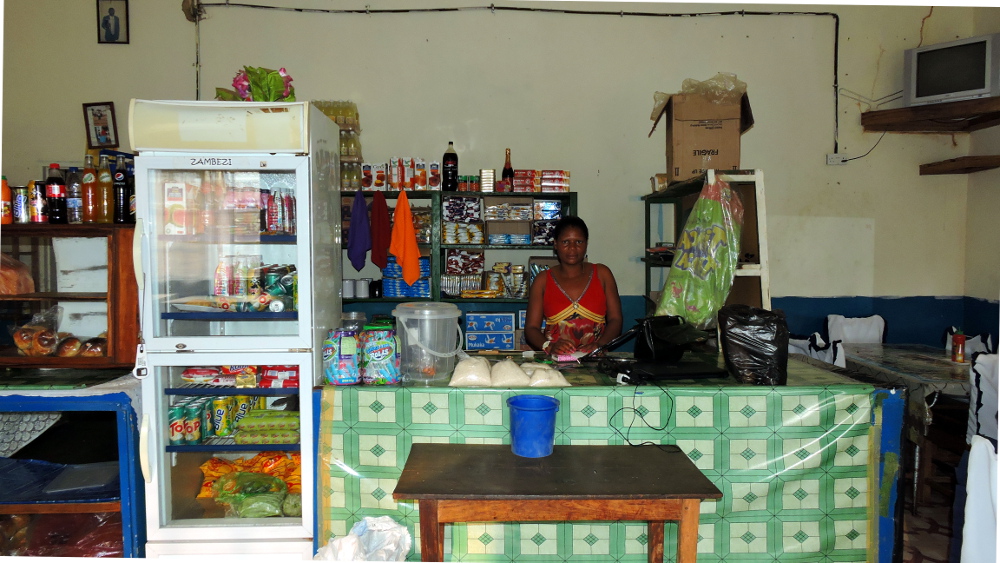 Josef said good-bye. I stayed behind and discussed my future route with the people. It was quite frustrating. I asked three different people and got four different opinions. The paved road was a long detour and I wanted to reach Lusaka as quickly as possible.

I must have looked pitiful. Ruth, the owner of the coffee shop, invited me to stay at her house. I got a meal of shima (mais porridge) with cassava leaves (the only “vegetable” they had) and chicken.

Her one-room house was in the garden of her parents place. 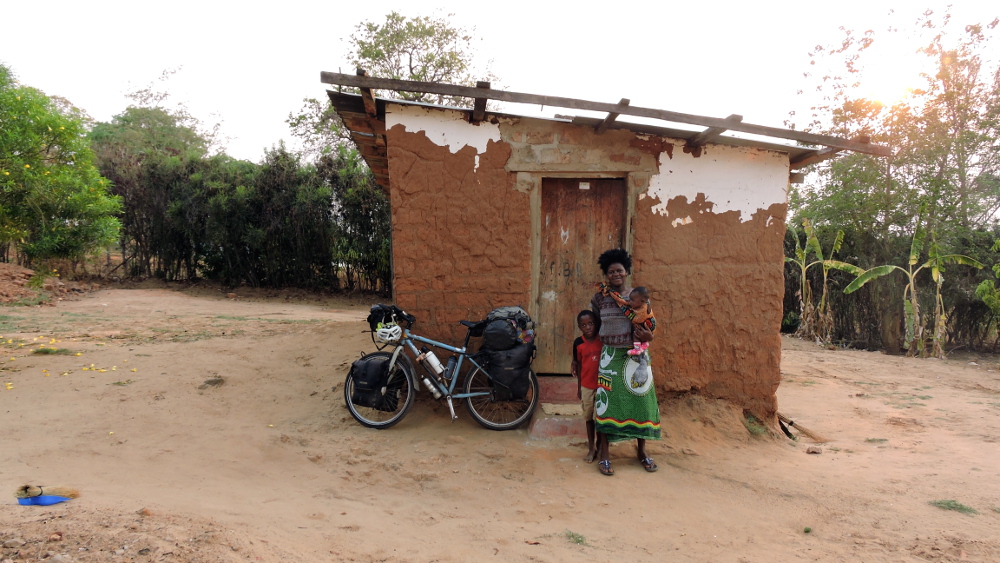 It was a typical extended family with innumerable people. Ruth let me stay at her house with a bag of soft drinks and cookies.

Next morning, she was back at her shop where she worked 12 to 14 hours every day.

I stopped by to say goodbye. As a farewell present, she gave me chocolates. My first chocolate for I can’t remember how long.

How can I ever repay Ruth’s kindness?

I continued on a marvelous paved road. 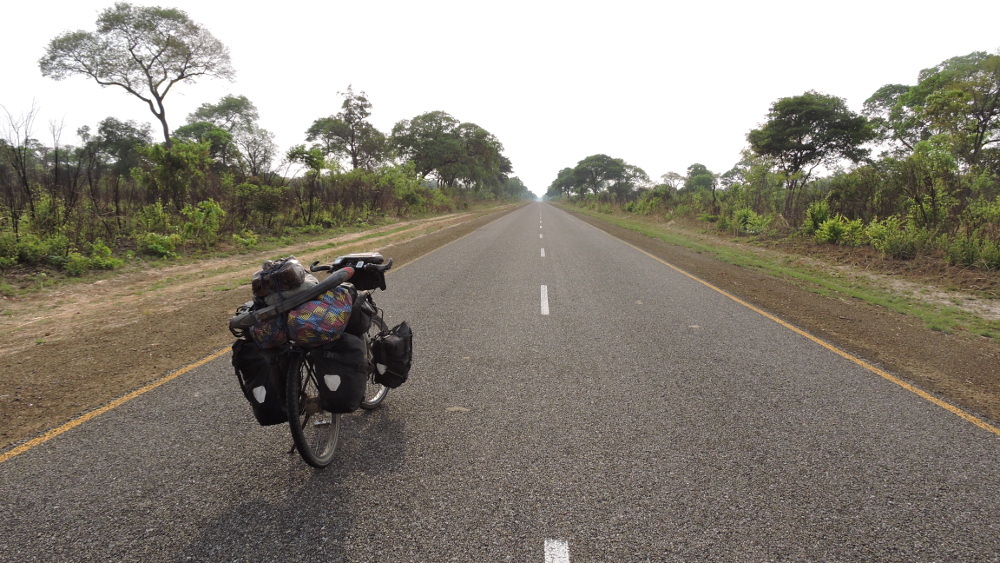 Now I really appreciated this.

At the turning point the amazing surfacing stopped but the road remained good and I continued.

It became more and more difficult. I wanted to reconsider but the paved road stayed on a northerly course.

I continued in the sand and hoped for the best.

A small truck which also served for passenger transport, stopped and asked whether I wanted a lift. I didn’t hesitate for long. They asked for 150 Kwatchas. I only had 100 and asked whether there was an ATM in Lucula. They said yes, yes and loaded my bike. Later on, it turned out they didn’t even know what an ATM was.

The road turned into a terrible sandy track. Ha, everything was supposed to be better in Zambia and all the roads were paved! 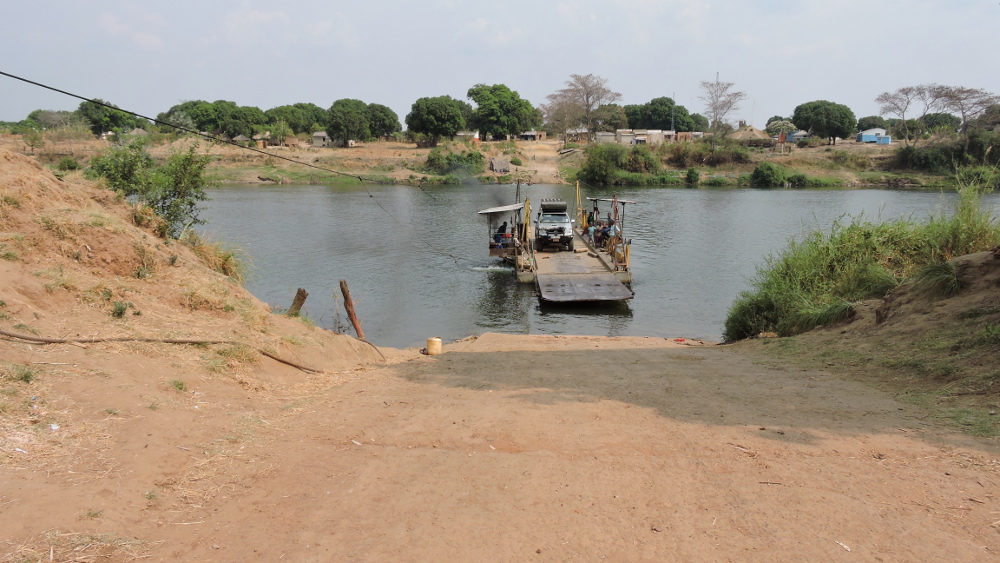 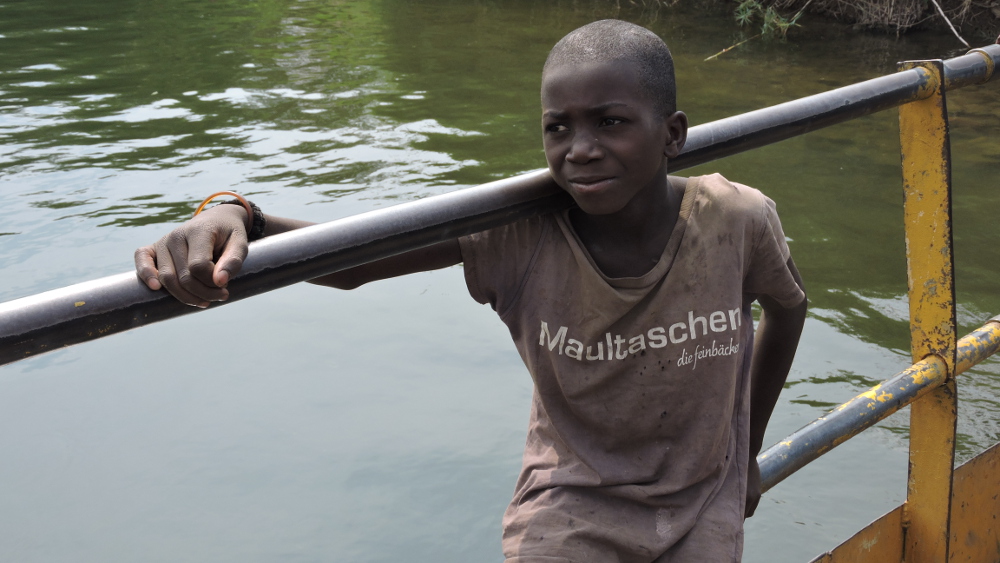 I became homesick. Especially because I had only eaten nshima (not my favorite) and cassava leaves for the last week.

After the ferry an older gentleman joined who spoke very good English. Peter was the father of Mike, the driver.

Not too long ago there had been elections, of course with riots. Peter didn’t think well of the president. All money was sent to Lusaka and to the east where the president came from. The west was left to its own devices. That was the reason why the roads weren’t paved, the villages had no water or electricity, and why there were so few teachers.

He thought the elections had been rigged. All people in the west had voted against the president. Now the west was considering whether they should secede from Zambia.

Before we reached Luculu, Peter asked where I was going to spend the night. Of course, the drive had taken several hours longer than planned and it was already dark. I replied I didn’t know and he invited me. 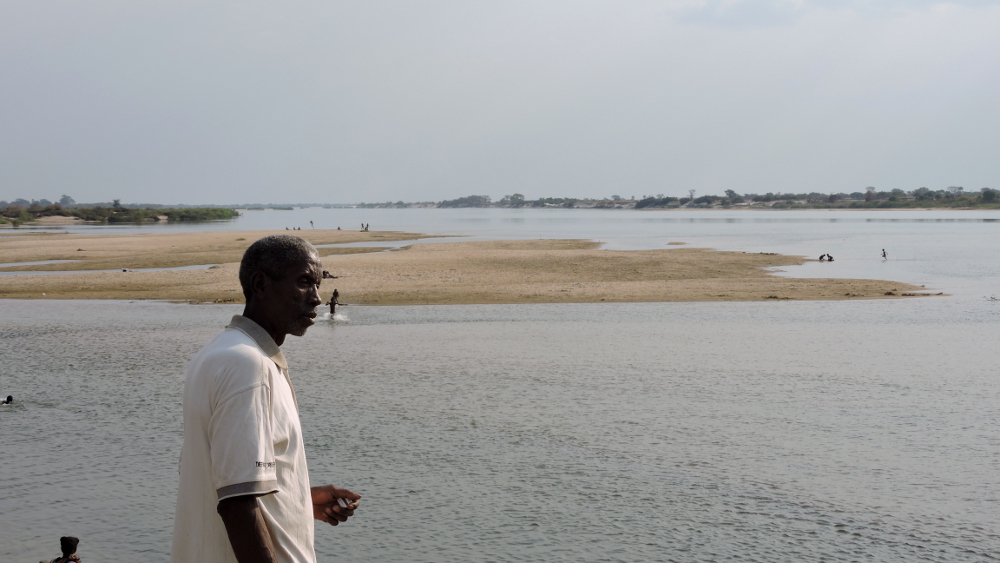 He owned several houses. He had rented the larger one that had electricity to raise money for his children’s school fees. He lived with his son and his daughter, who went to school here, in a small hut. 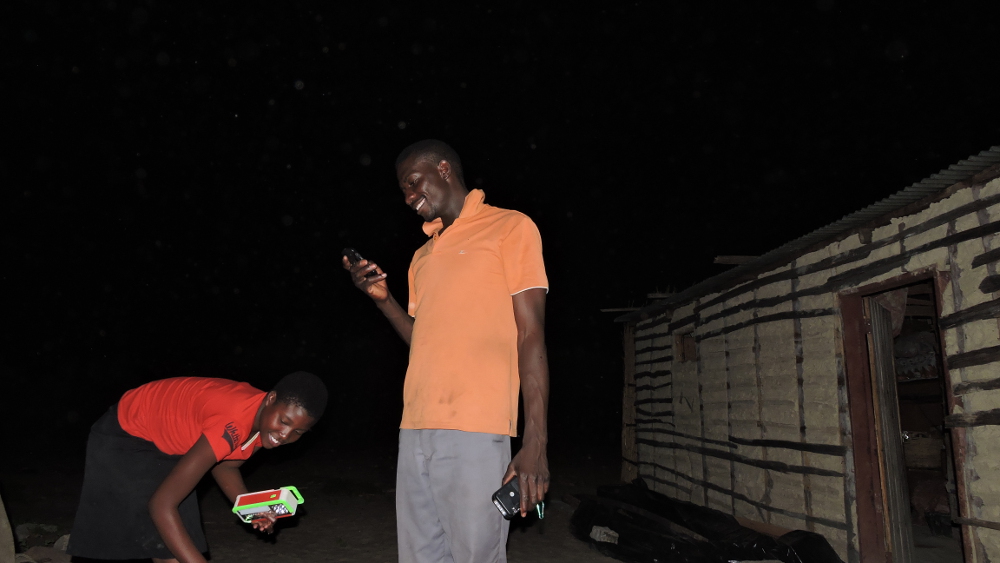 Of course, there wasn’t an ATM in Lucula but no one asked me for money.

As a thank you, I left some of my things.

Next morning I packed but I felt awful. I felt poorly and had no energy.

Peter just looked at me and said, I should stay for the day. It didn’t take long to convince me and I laid back down.

Public transport consisted of trucks which took merchandise in one direction and people in the other. Or both at the same time.

Peter and Mike asked around if a truck would leave the next day for Kaoma. The sandy road continued to that town. One was supposed to leave at 6:00 am. Great, then I’d be in Kaoma before lunch time. Mike and Peter accompanied me to the departure point from which the truck which had loaded bags of cement, should leave. 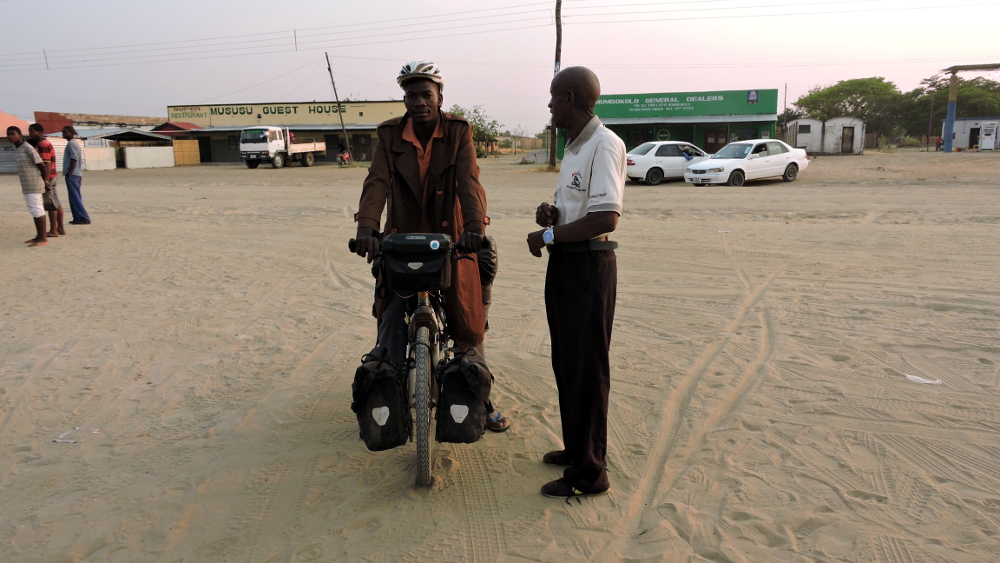 Now the waiting started. Rather than at 6:00 am we left at 10:30 am. I didn’t have anything for breakfast, no coffee. And I didn’t have money to buy anything.

It was sweltering hot when we finally left for the 195-kilometer trek. It was unbelievable. 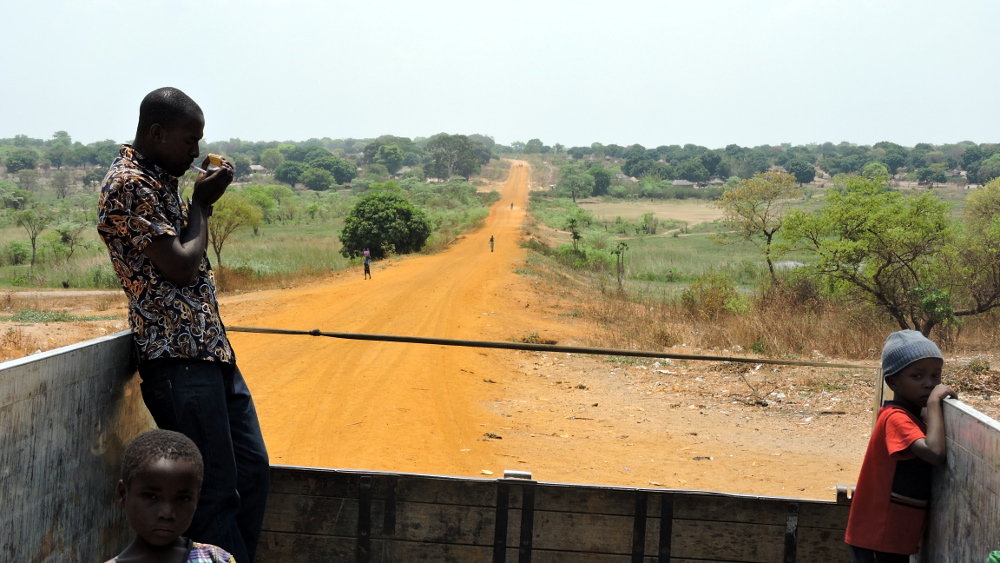 In Germany one wouldn’t be allowed to transport cattle like this. It was unbearably hot. The truck went a short distance, then it stopped to load passengers, straw, charcoal, etc. I lost hope that we’d arrive during daylight hours.

I had assumed that we’d be there at noon and therefore hadn’t brought anything to eat and very little to drink. 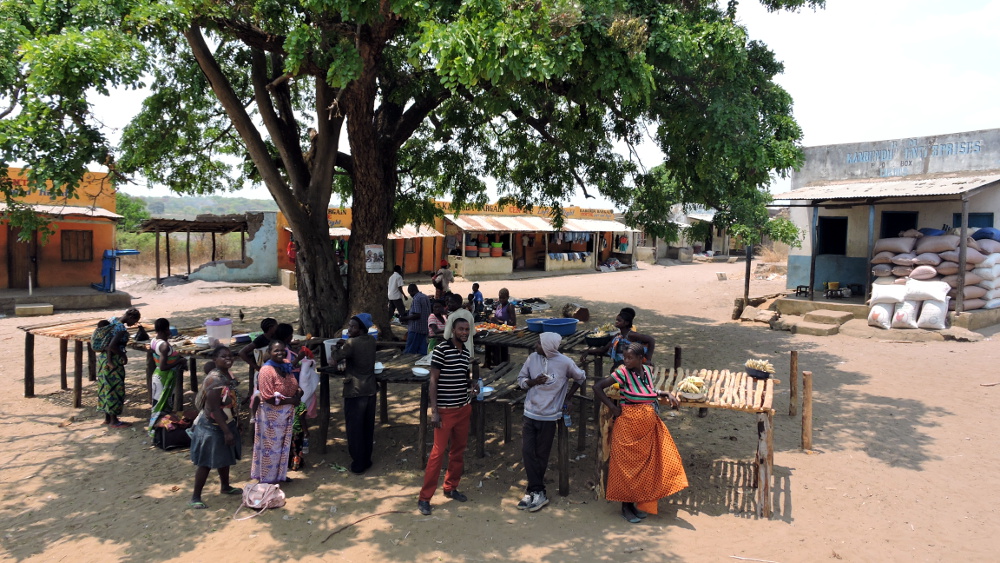 But I didn’t have any money. I felt worse and worse and somehow tried to lie down. Unbelievable that this is a normal way for Africans to travel.

It was around 22:00, already dark, and about 20 kilometers before Kaoma when one of the axles broke. Today they couldn’t continue.

A young teacher who must have watched me for a while, flagged down a Jeep, and took care that my bike was reloaded. I was hardly able to see in the complete darkness but had the feeling that one bag was missing. I didn’t care and just wanted to get away and to Kaoma. There were only old things in the bag which I didn’t need too much.

After the ride on the truck, the seat in the back of the Jeep was almost luxury. Very quickly we arrived in Kaoma. Marcel, the teacher, first took me to an ATM. Of course, it didn’t work but we had more luck with the second one.

After five days, it was a wonderful feeling to again have money in my pocket. Then he accompanied me to different guesthouses until we finally found one that had a room. It was almost midnight. Marcel was another person who helped me so much!

From here to Lusaka the road was supposed to be paved and indeed, it was.

I went through Kafue National Park 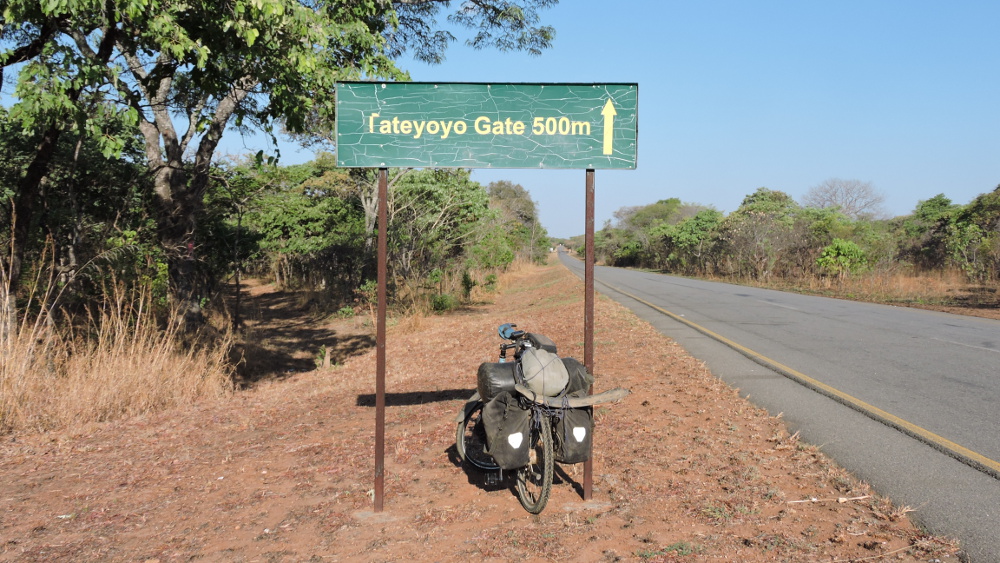 Where I could camp with nice rangers. 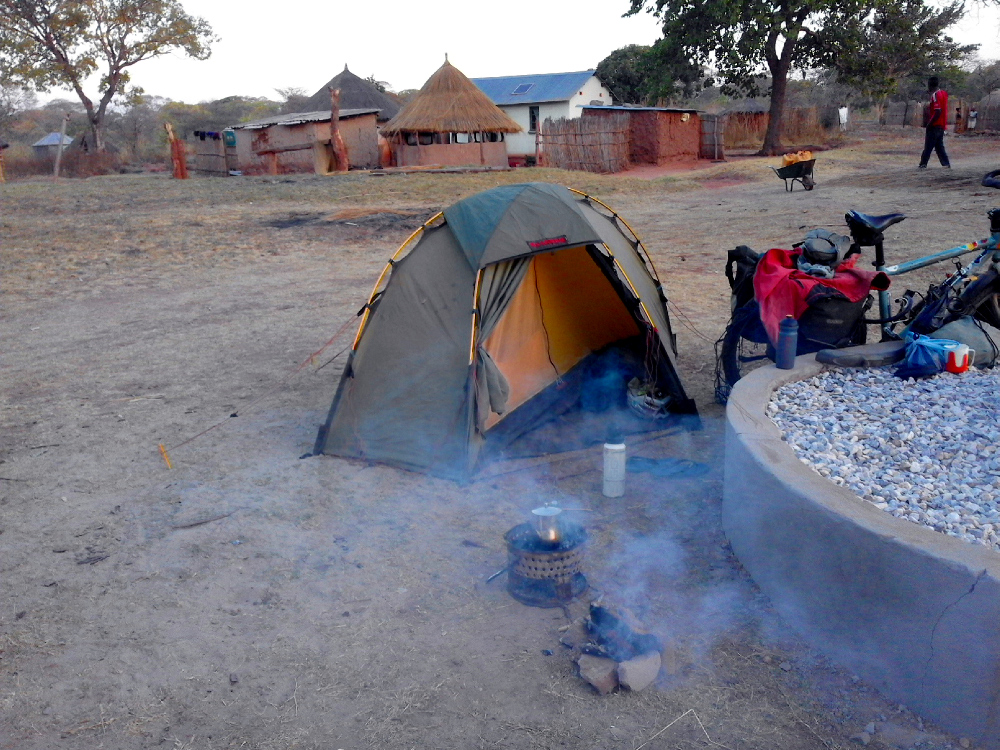 Apart from monkeys, I didn’t see any other animals. 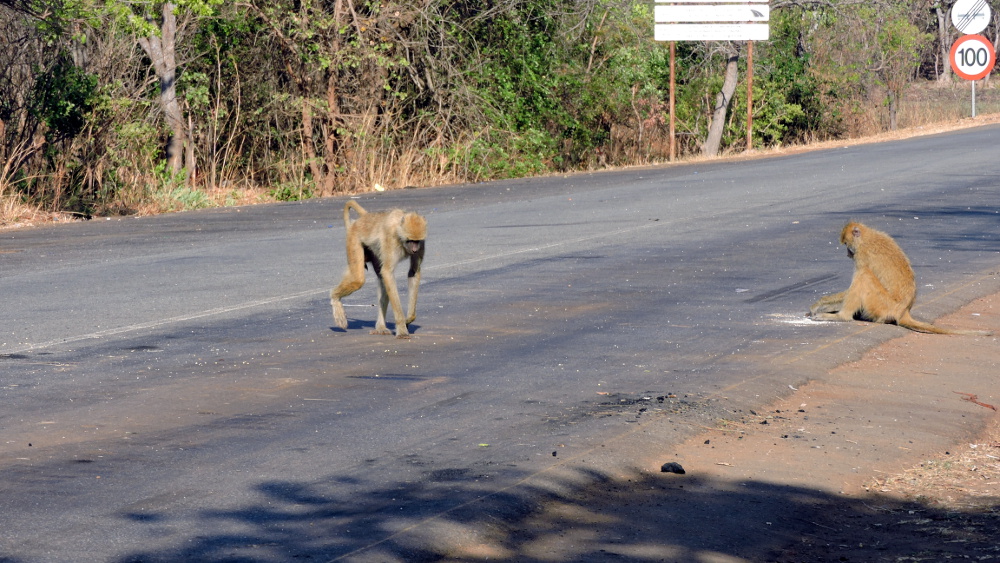 Next evening, I tried to find out whether there were village chiefs in Zambia. Indeed there were and a young man took me to him.

“Not far, not far”, he repeated often. Well it was quite far and I felt bad about it. We went away from the road into the bush where a few men were discussing under a tree. 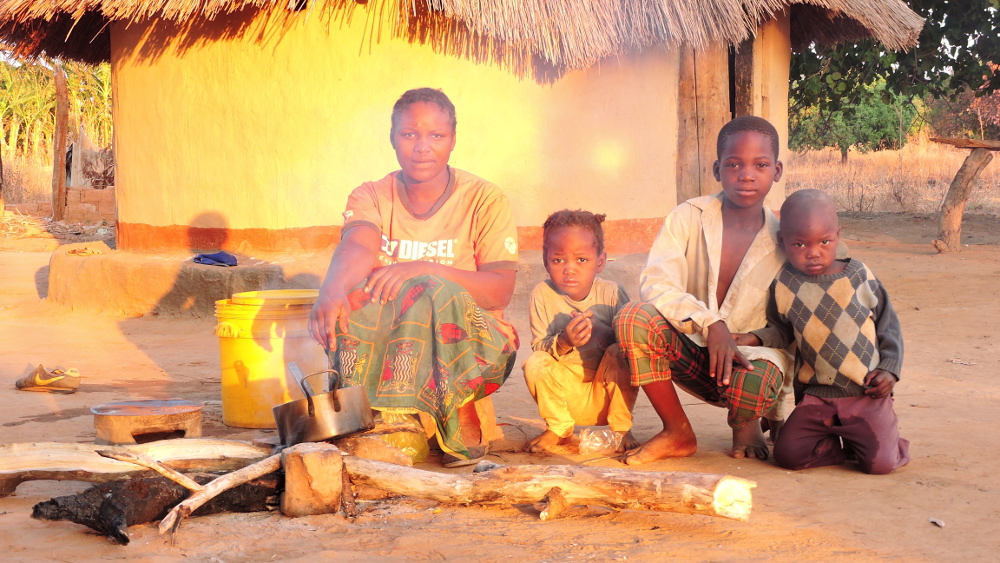 This was how the village chief in the western part of Zambia lived.

On a well-paved road, among baobab trees, 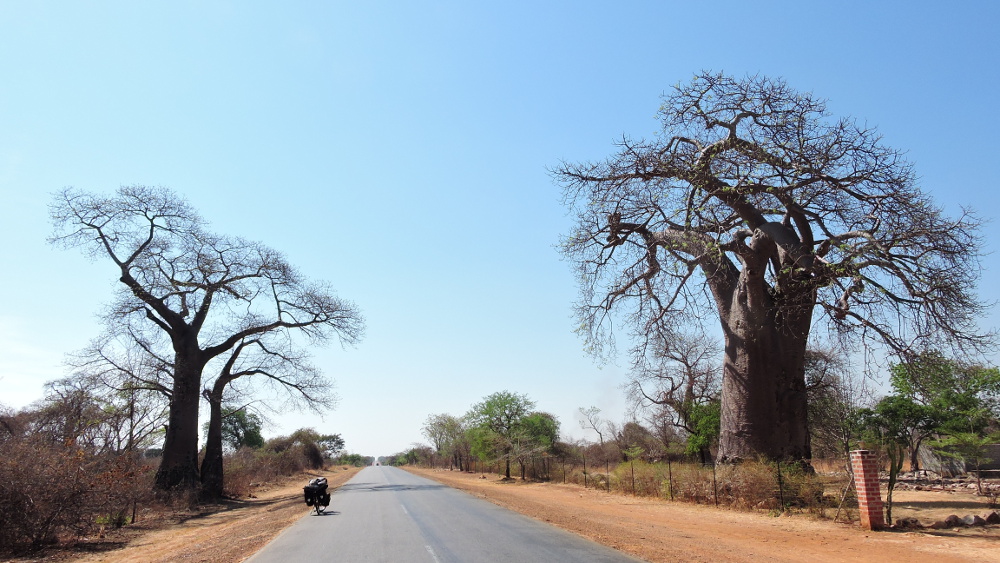 The way continued to Lusaka. 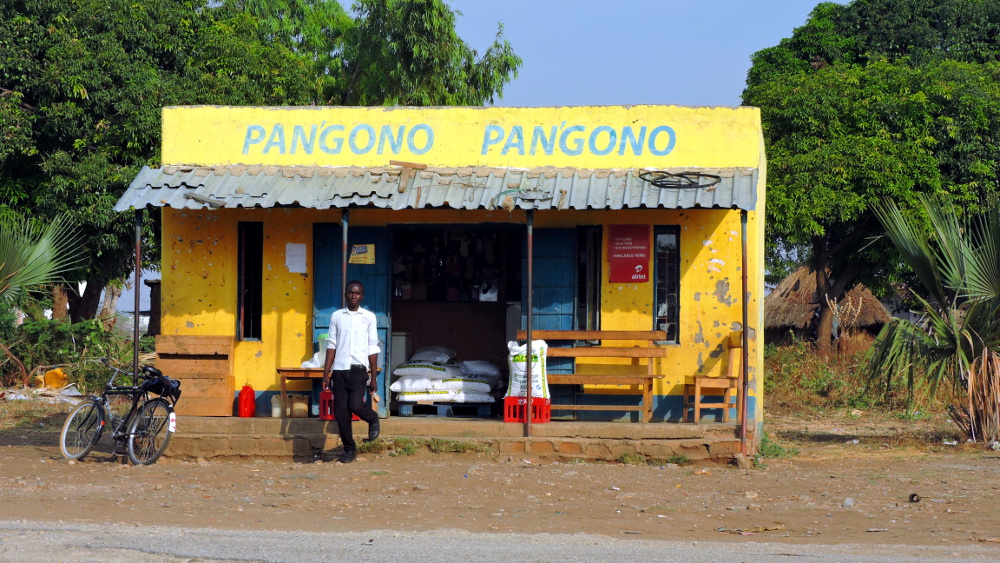 I had a real culture shock when I reached Lusaka, one shopping mall after the other, and white people!

As planned, and despite all adversity, I reached Ed and Alex, on Saturday, 8th October. They were my WarmShower hosts and I joined Marcelo, a cyclist from El Salvador. 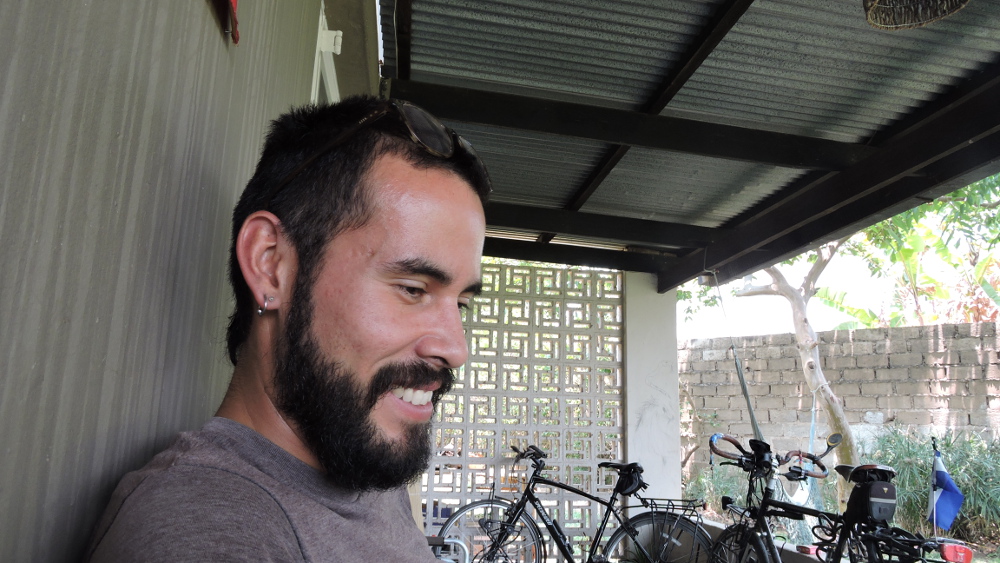 He was the second cyclist whom I met since Morocco. The other one was Ali from Morocco whom I had met in Mali.

On Monday, the day of departure, I felt so ill that I could hardly move, Marcelo boxed the bike for me.

I felt a bit better by evening and Alex took me to the airport.

I only had the bike box as checked-in luggage. Apart from the bike I just took a bit of clothing. The rest could stay in Lusaka.

The bike and I needed a complete check-up and overhaul.

After a long wait at the airport, we were informed that we couldn’t depart because the plane had a problem.

Slowly all passengers were transported to the Intercontinental Hotel in Lusaka. It was sheer luxury and all expenses paid by the airline.

It was long after midnight when I got to my room. But I could stay there all of next day.

I couldn’t believe my eyes when I saw the breakfast buffet. How long had it been since I had seen cheese and ham? And all the fruits and the dairy products. Where did all come from?

I thought about the locals who didn’t even have clean drinking water.

Speaking of water, there was of course a swimming pool.

In the afternoon we were taken back to the airport and this time all was fine. 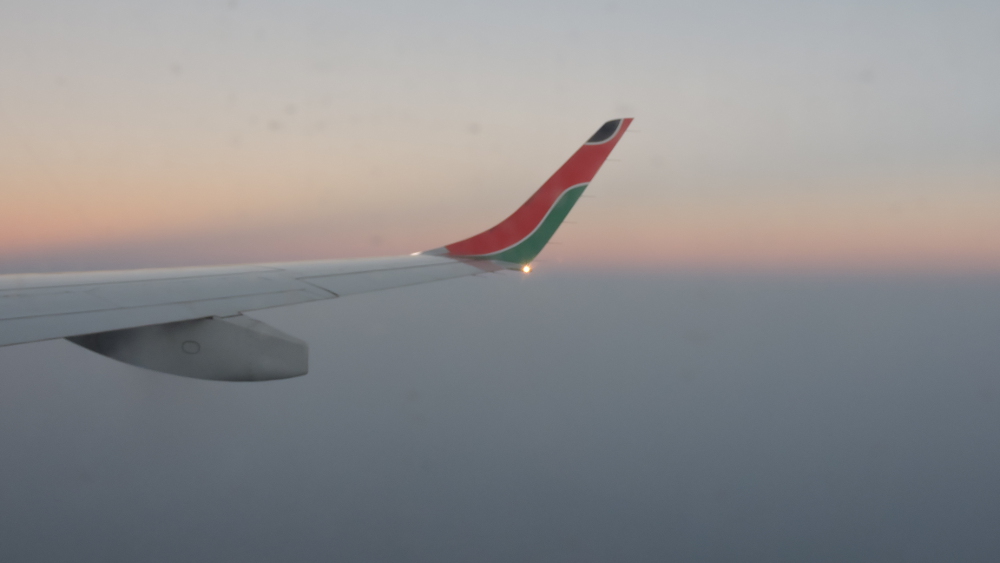 Bye, bye Lusaka. I went to Germany for four weeks to attend a book fair and for public readings of my book. And of course, to spoil the bike and myself a bit.