Finally, I left Rwanda and came to Uganda. Would I again be pursued by children? Uganda was nine times the size of Rwanda and I hoped to be able to sometimes catch my breath. Read more about kids and mountains.

One could get an East Africa visa which gave a three-month access to Rwanda, Uganda, and Kenya and one could travel freely between those countries. You can imagine that I had no intention of returning to Rwanda.

Border formalities were easy. During the one minute I spent at immigration I saw on TV that the elections in Kenya which had taken place on August 8, would be repeated. That meant I might be caught in the middle of them. Let’s see.

At the border there was a child that cried “Mzungu, give money!” But it was only one.

The Congo/Rwanda/Uganda triangle became famous because of Diana Fossey and the movie “Gorillas in the Mist”. 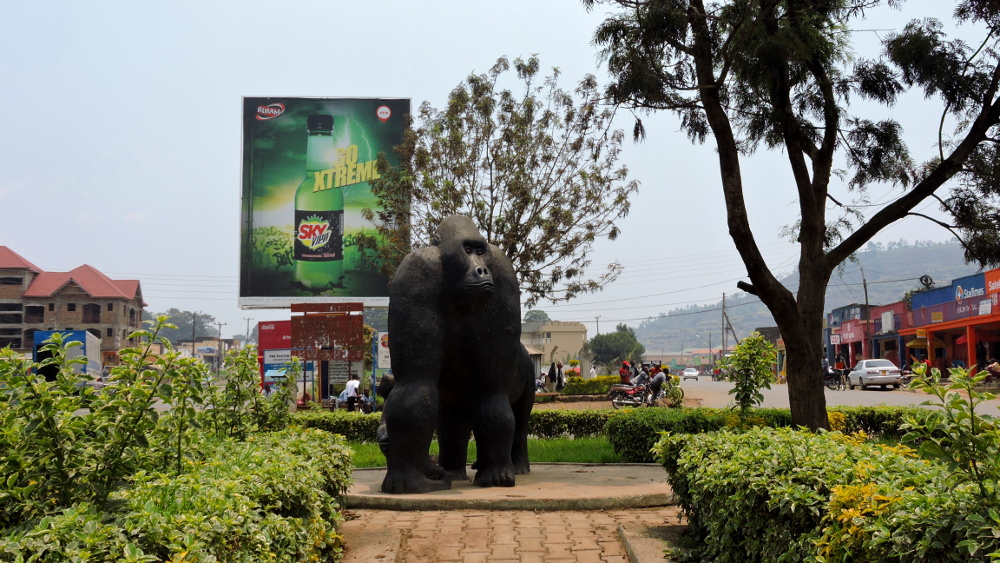 I had seen the fog but not the gorillas. I didn’t want to support the Gorilla tourism. Tours were advertised for hundreds of USD. To make sure that tourists would see gorillas, they were chased through the forest. Why can’t the poor animals be left in peace?

I cycled to Kabale by way of Kisoro. 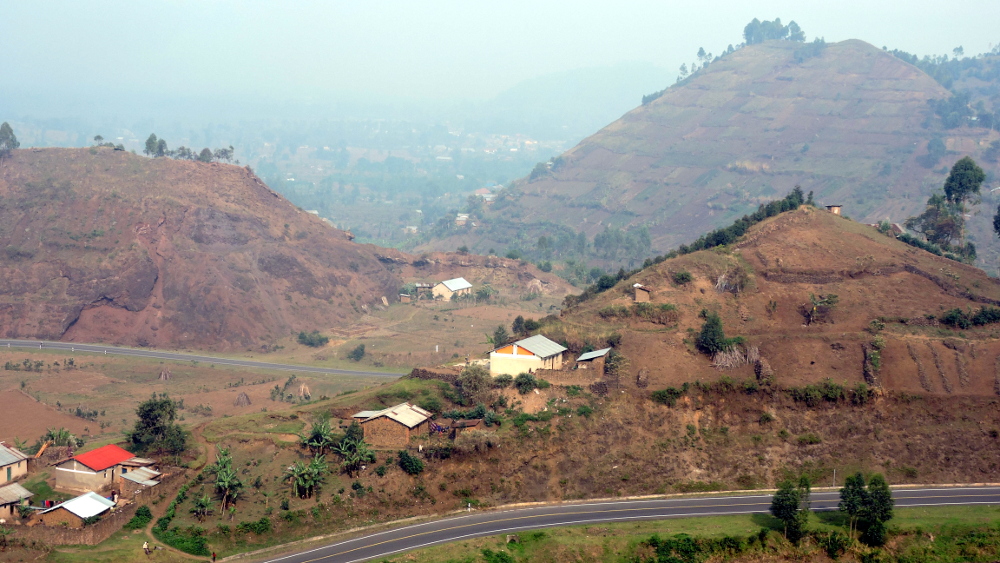 It was less mountainous than I had expected. I really enjoyed that there were few children. I had almost forgotten, how lovely it can be to cycle peacefully without hearing  “Mzungu, give money”. 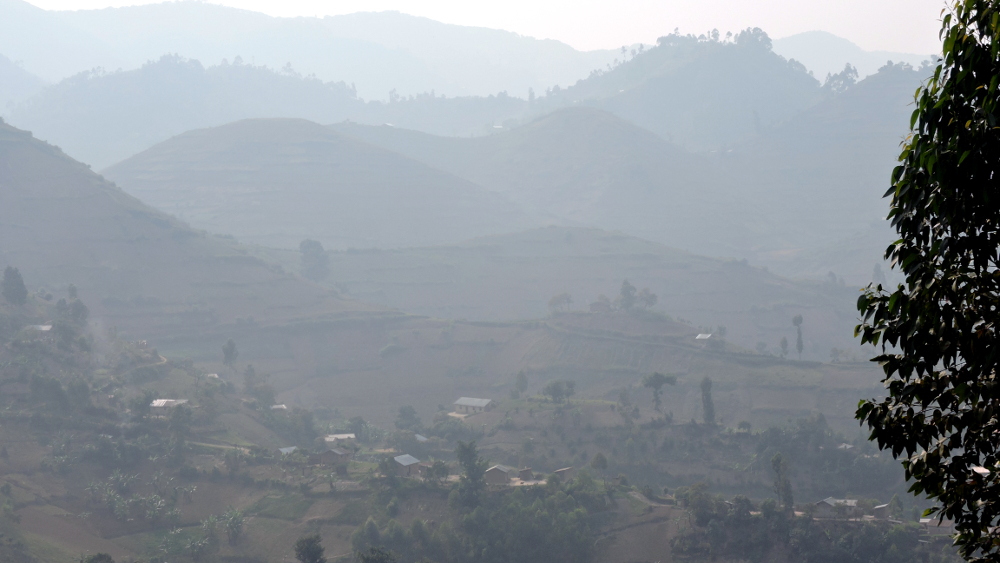 It got a lot hillier after Kabale. I had the impression that I biked up and down stalagmites. I was high up and saw a valley far below. Down there was a paved road and there was only one of them, the one I was on. Therefore, I had to get down there.

Quickly I was several kilometers and many meters further down.  It was much warmer.

Very few people lived here but there were very interesting birds, for example these crowned cranes. 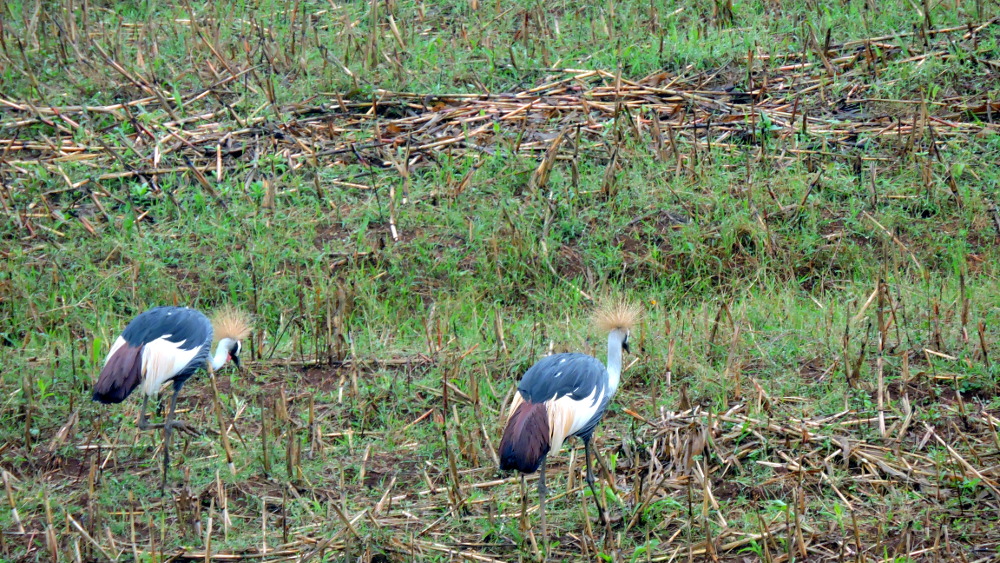 At last I could take my breaks in peace. No one stopped and started. No one screamed “Mzungu”. Paradise! If someone approached, they called “Hello” or “Jambo” and continued.

I had assumed that the road from Ntungamo to Ishaka wouldn’t be paved. I was surprised that a brand-new paved road awaited me. 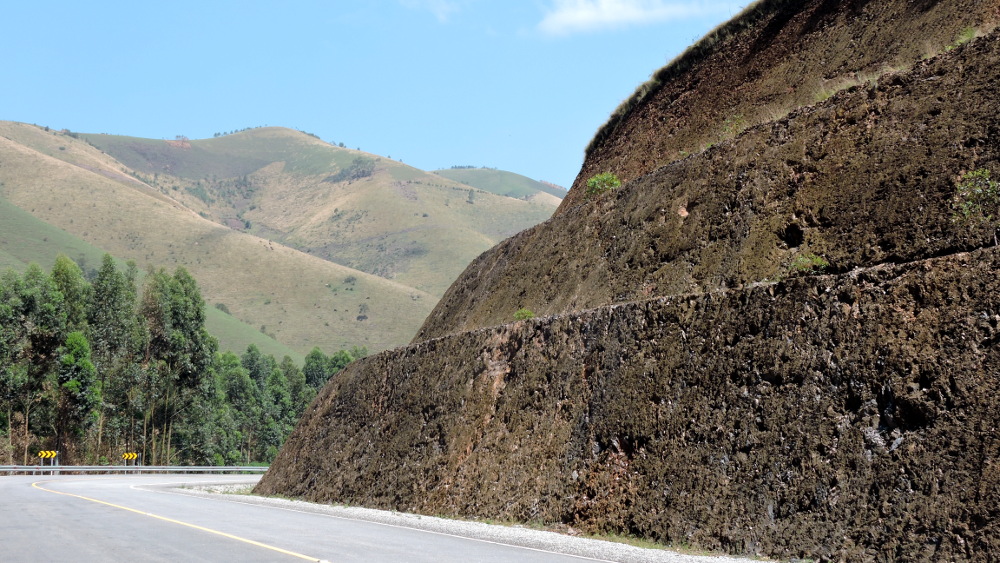 First, I cycled through beautiful mountain scenery. After Ishaka, there were tea plantations. 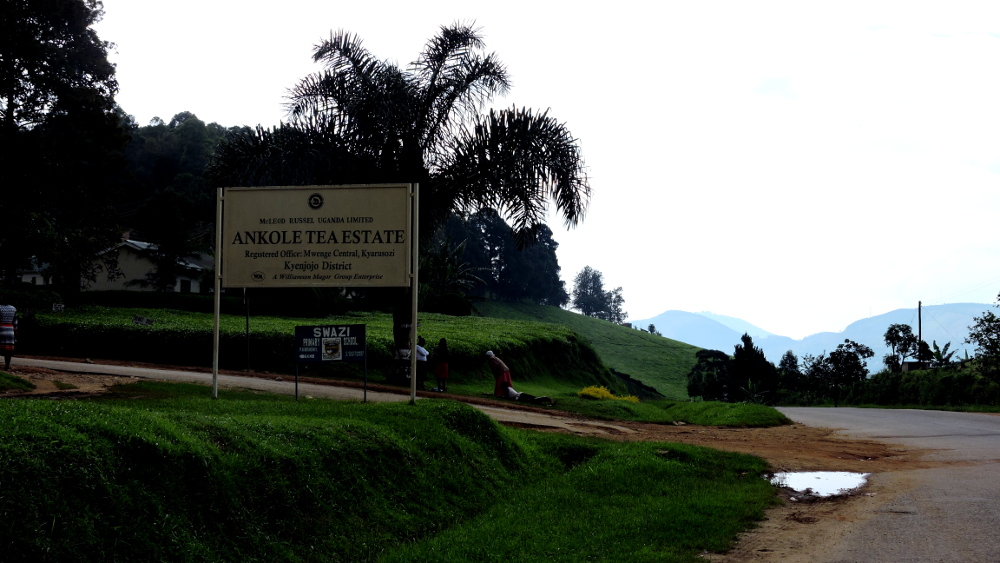 For the first time in a long while, I saw blue sky. Together with the brilliant green of the tea plants, it looked fantastic. 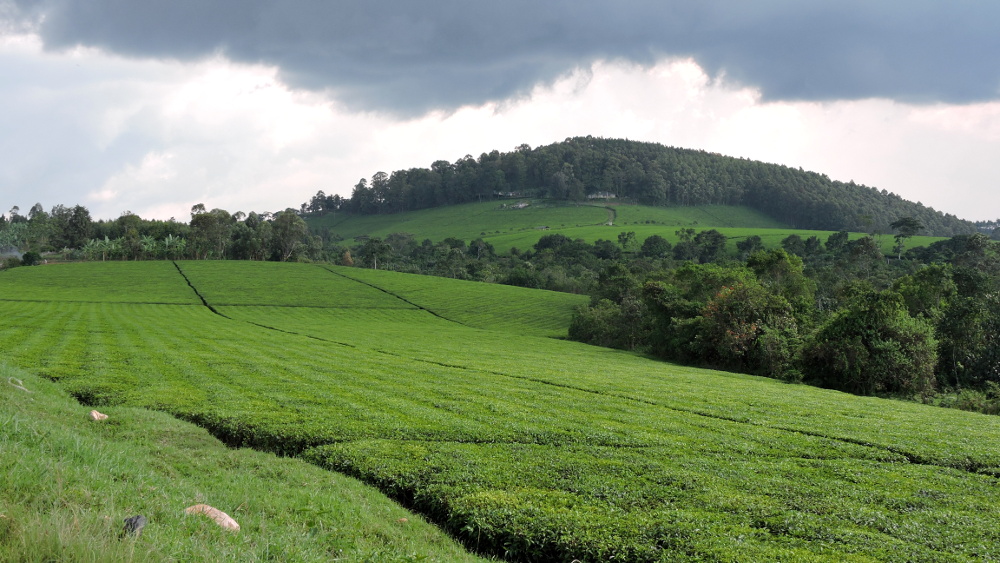 I liked Uganda better every day.

Then came dense forest and a small campground. 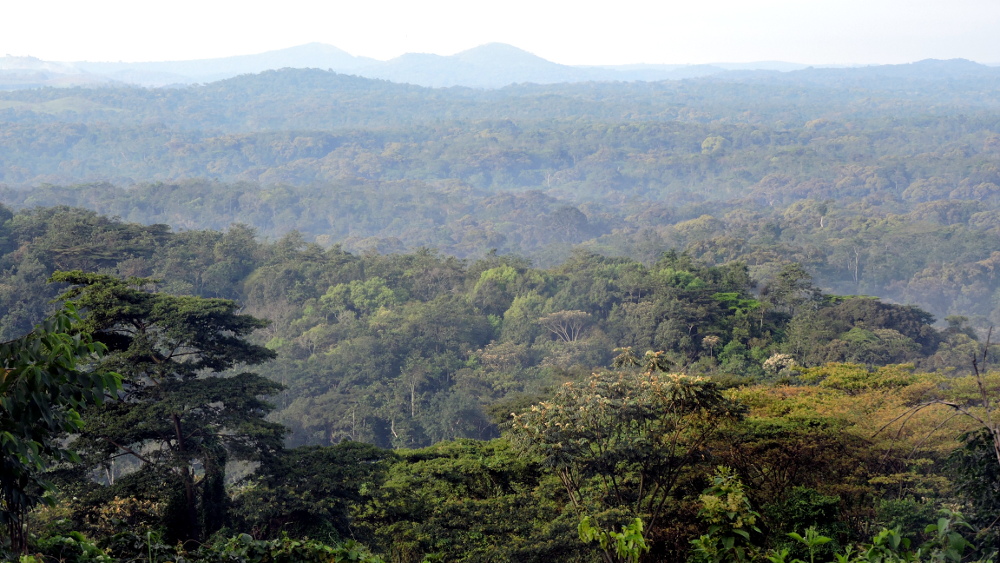 There were a lot of monkeys and by now I didn’t like them any longer. They were too keen to get my food. I had hardly turned around when they snatched my bread. I had chased them away successfully when a 16-person strong tour group arrived to photograph the monkeys.

After I few kilometers, the road descended to Queen Elizabeth National Park. 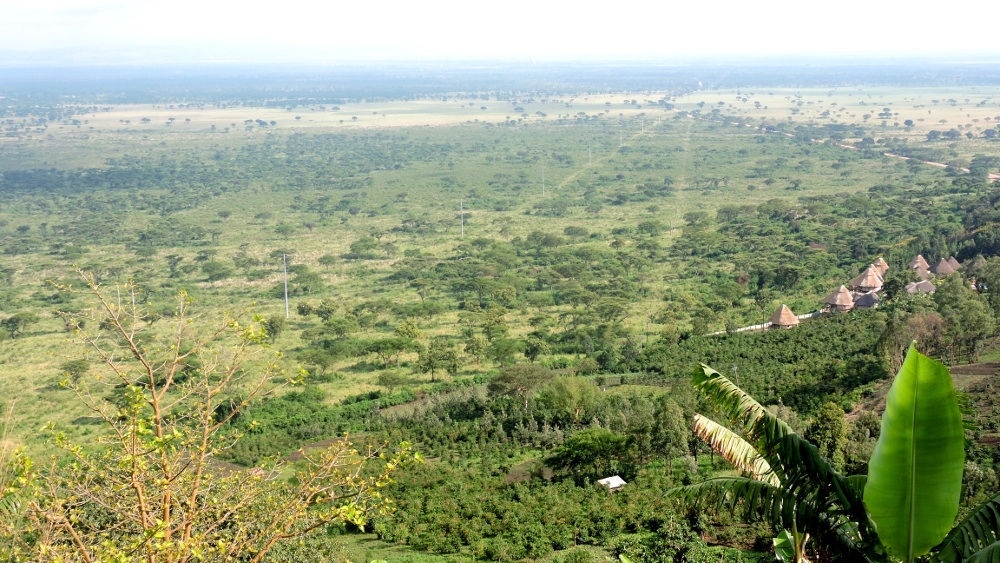 There were a lot of wild animals but no one told me I couldn’t continue.

The roads were in much worse condition than before. There were a lot of potholes and the cars weaved around them. They had to drive very slowly and there was little danger for the animals to get run over.

I was surprised when the cars stopped but I cycled on. Suddenly there were three elephants a few meters ahead of me which crossed the road. I stopped immediately. I didn’t have the courage to take photographs. 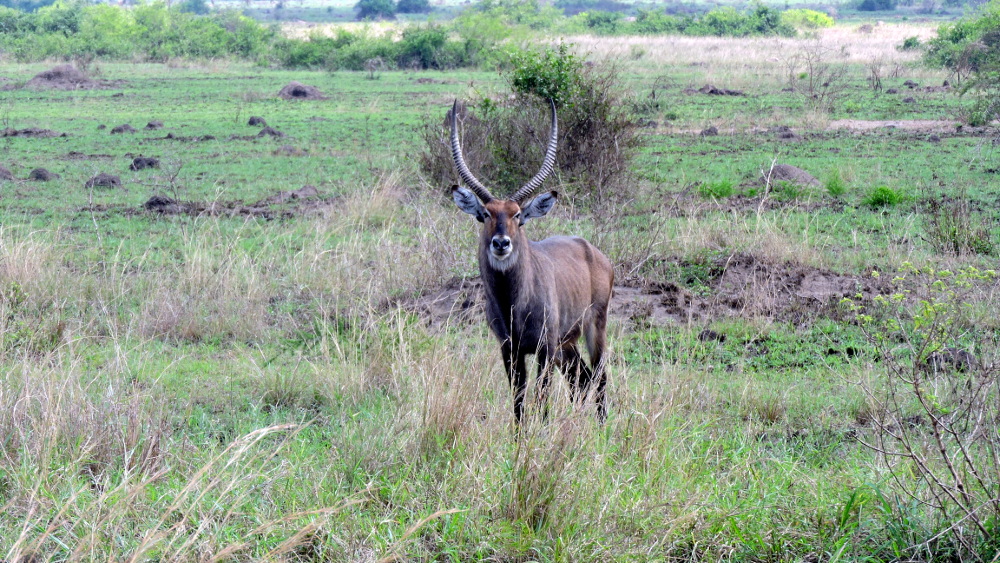 I cycled between Lake George and Lake Eduard, 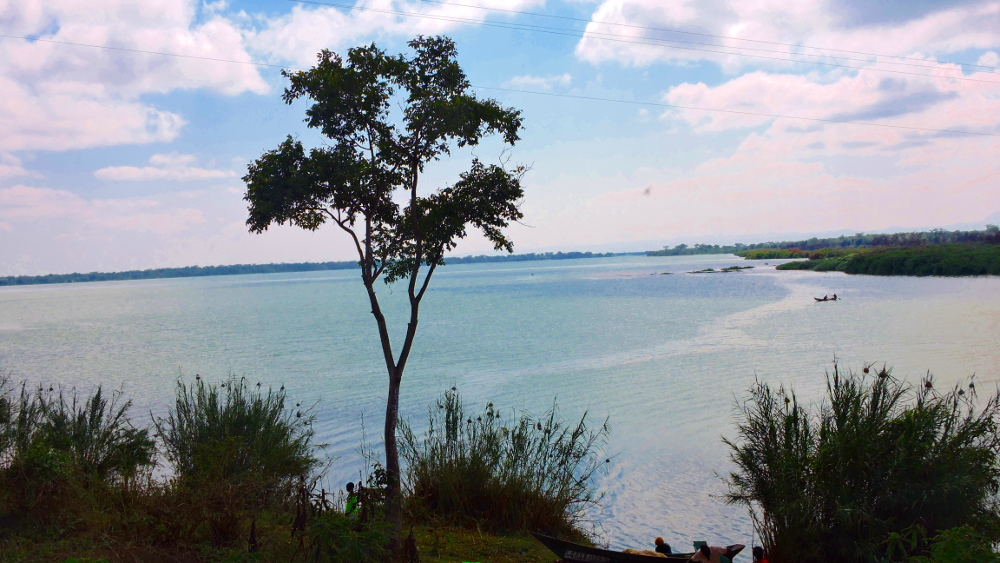 And then left the southern hemisphere. 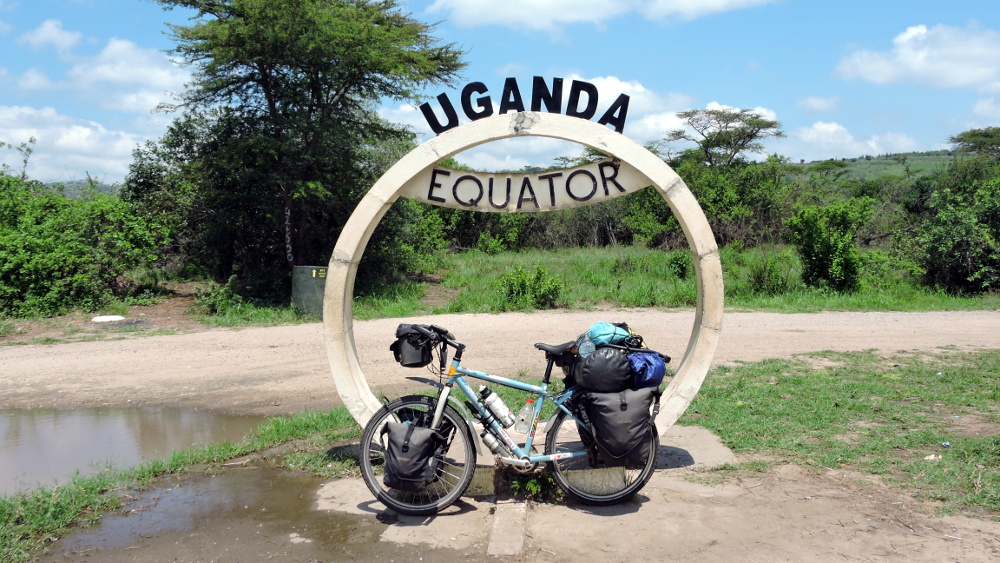 (but I briefly turned south again in Kenya)

There were more people and opportunities for food in the direction of Fort Portal. 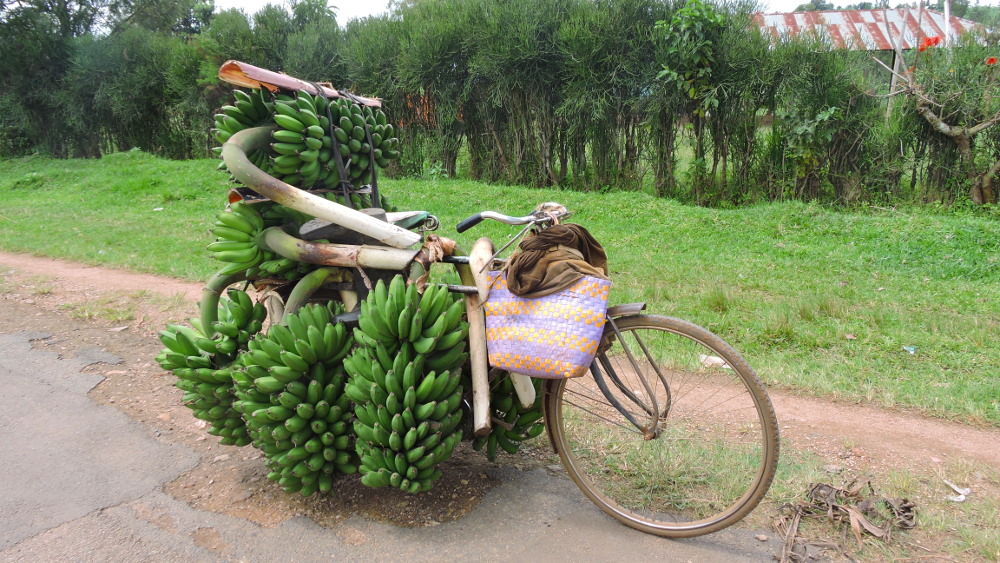 In addition to bananas, there were “Rollex” or rather “roleggs”: eggs sunny side up rolled in chapatis. A few of those gave me energy for many kilometers, even with uphills.

By now the rainy season had started but so far it hadn’t bothered me. So far, it only started raining after I had pitched my tent. And I stayed snug and dry in my Hilleberg tent.

But when Immaculate, a WarmShower host in Fort Portal offered me a room, I didn’t decline. Shortly afterwards it started to pour during a thunderstorm.

I had been thrilled by the great road before Ishaka and was horrified by the terrible road after Kyegegwa. 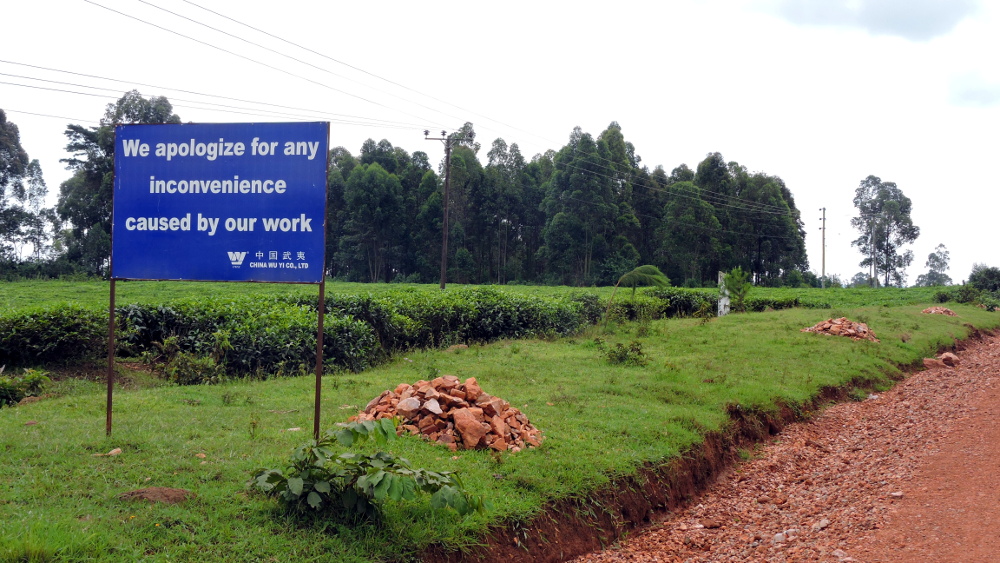 This sign didn’t bode well because Chinese construction sites lasted for many kilometers. In this case it was a 50-kilometer stretch. For the first time they apologized.

Afterwards it was a race against the rain. It became completely black all around me and this time, I lost.

It started when I was in the middle of nowhere. I was already completely soaked when I took shelter in a small shop. It was too dangerous to continue. There was very little visibility and the water on the road became uncomfortably high.

When the rain let up a bit, I continued. Shortly afterwards it started again. I only continued as far as a lodge where I could camp under a shelter and take a hot shower.

Next day my clothing was as wet as the evening before.

On the last stretch to Kampala, the capital, I overexerted myself again. I really wanted to reach the backpackers where I could camp. It was still over one hundred kilometers, it was mountainous and the closer I got to the city, the more traffic there was. Kampala was one of the worst African cities.

I was really exhausted the next morning but I couldn’t help it. I needed to get three visas. First, the visa for Ethiopia. Bravely I faced the traffic or rode at the very edge of the pavement. 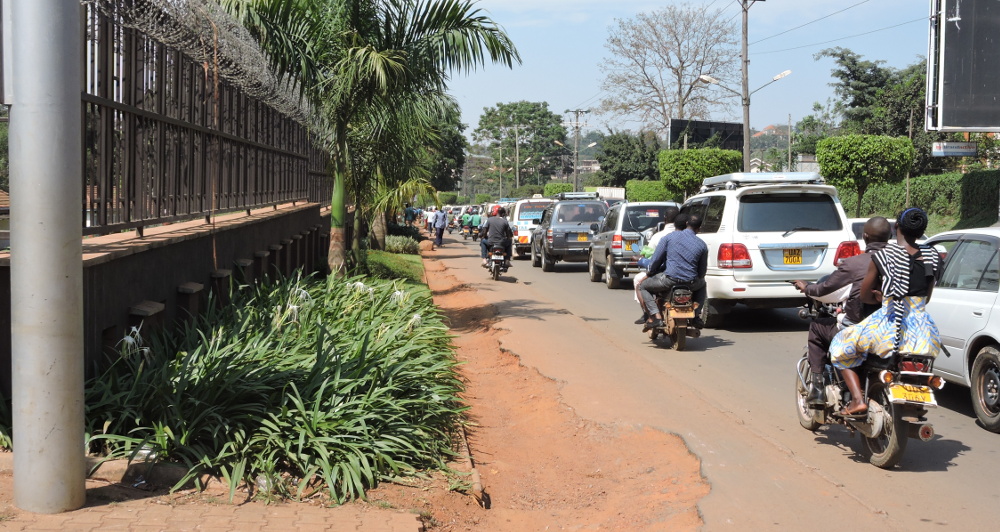 First, I went to the place where the Ethiopian embassy was supposed to be but I was told that it had moved. Onwards for a few kilometers. When I finally found it, I was told that without residence in Uganda, I couldn’t get a visa.

I left without having achieved my goal. The receptionist wasn’t very friendly and I decided to try my luck in Nairobi.  I didn’t even try to get the visas for Sudan and Egypt.

I rejoined the terrible traffic. 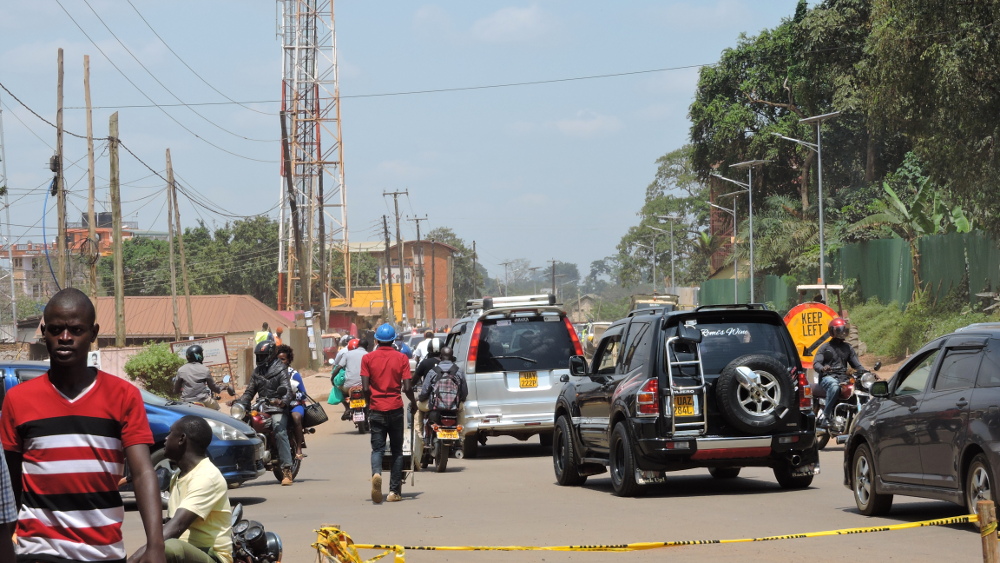 On the one hand I was glad to leave the city quickly but now I had to go to Nairobi.

My next destination was Jinja which was on one of the sources of the Nile on Lake Victoria. It was an easy day trip from Kampala. The first thirty kilometers, I had to fight the horrible traffic. I really recommend a wide detour around the city, unless one needs to visit it.

Early on, it started to rain but the road was pleasant. By the time I reached the “Source of the Nile”, I was completely soaked. I didn’t take any photos because I was wet and the rain continued. From here one had an excellent view of two man-made islands. On one of them were springs which generated 30 percent of the water of the Nile. The other 70 percent came from the lake. Tanzania and Rwanda have their own sources of the Nile, rivers which flow into Lake Victoria.

A little bit further on, I camped at the Kingfisher Lodge which was directly on the lake. 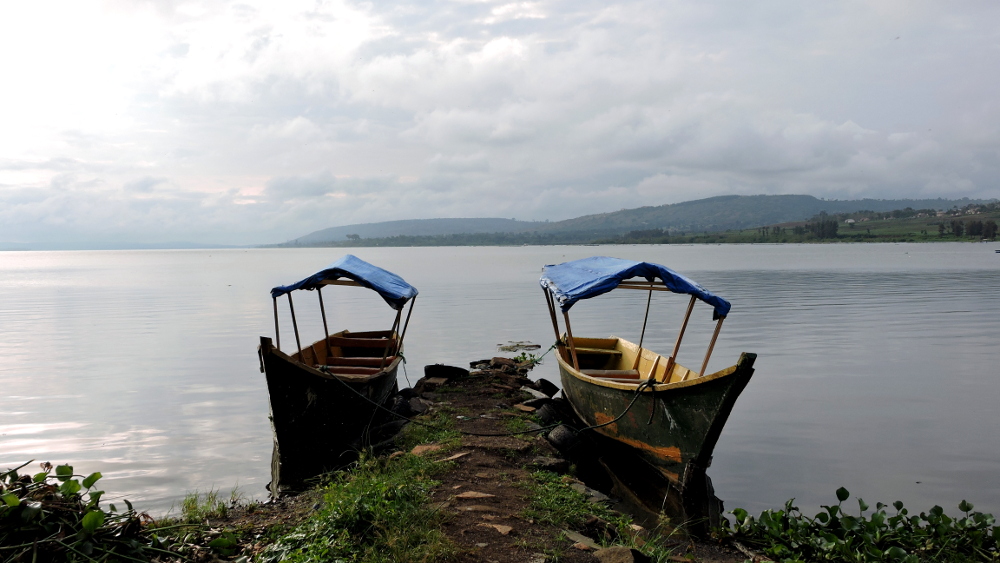 What luxury after the city.

After the river Niger, Congo, and Zambesi, I now crossed the White Nile. 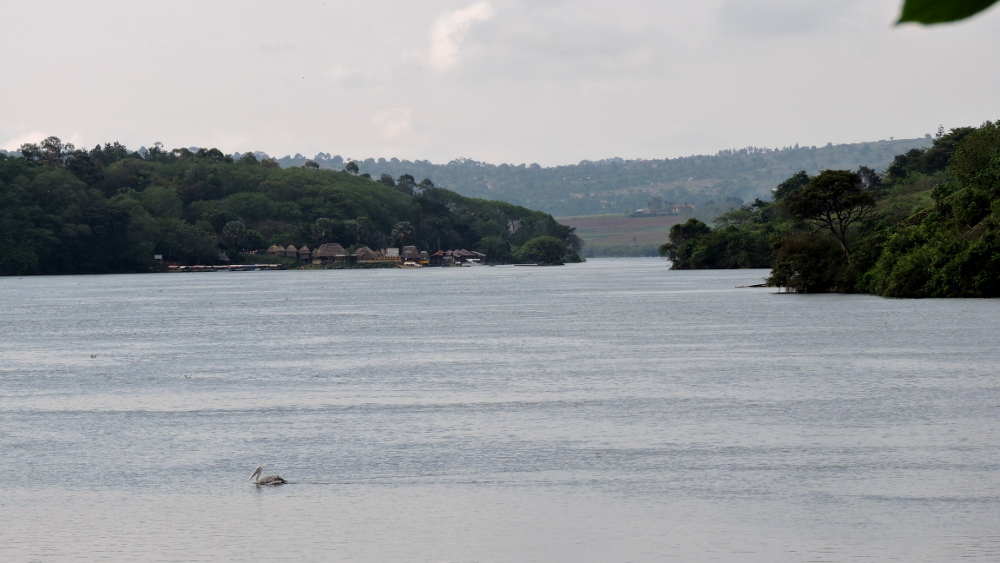 The islands with the springs were immediately behind the bend. I had heard so much about this place but I didn’t find it all that spectacular.

Before the border town of Busia, I spent my last night in Uganda in the garden of a small, simple hotel under this amazing tree. 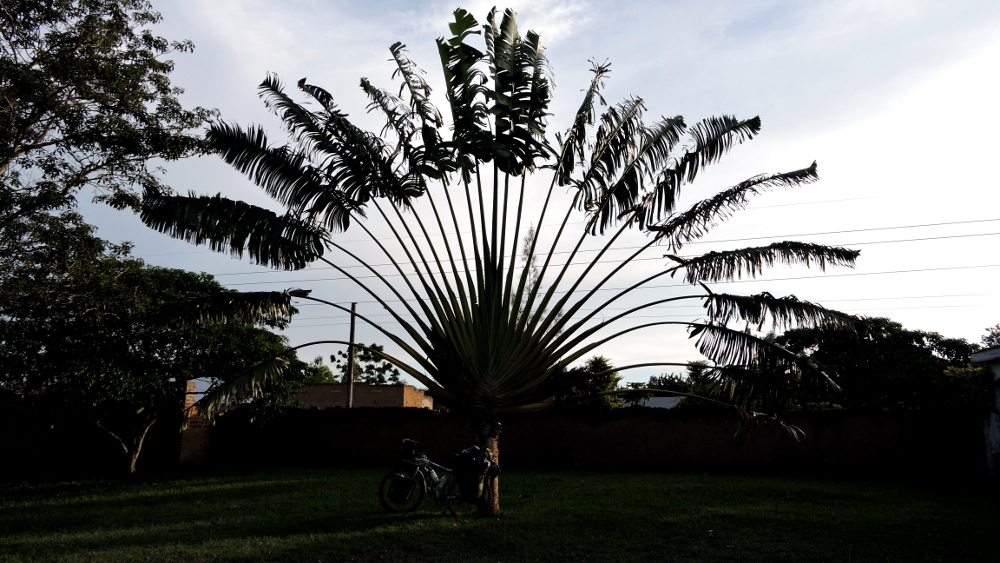 In the morning, I cycled past rice paddies to Busia, at the border. 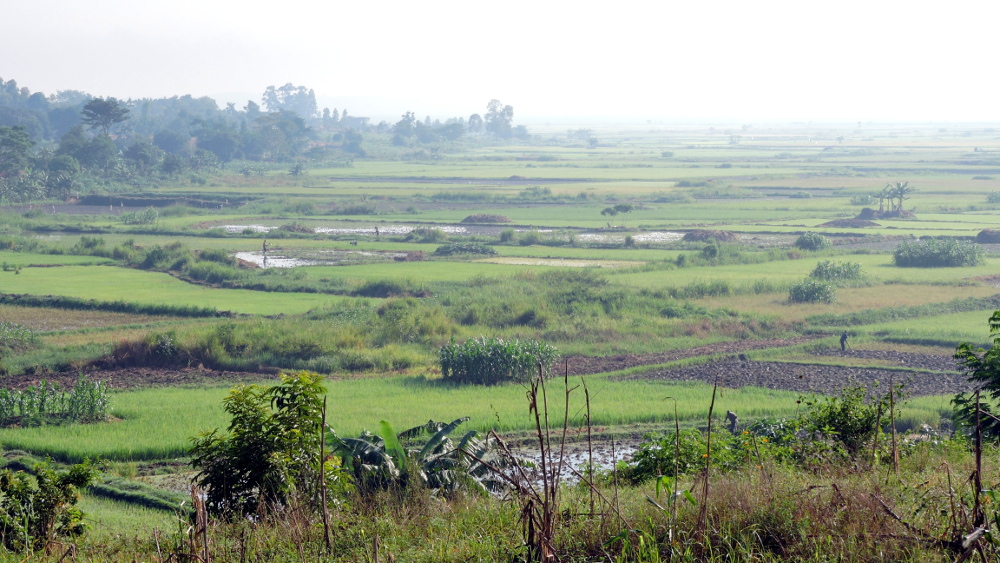 I spent my last Ugandan shillings.

Despite the rain, the roads, and the traffic in Kampala, Uganda had been paradise after the last countries.

I had been in Uganda for 16 days and cycled 931 kilometers.

I had mixed feelings about Kenya. Last time I visited was thirty years ago. How did it now look and would there be unrest because of the elections?

More about it in my next blog.