Togo and Benin on the fast track

Once again, I headed to a special Africa: the center of voodoo culture in Togo and Benin. Both countries are so narrow that I crossed them quickly.

The capital of Togo, Lomé, had virtually merged with Afloa in Ghana. It was one large city with a border at its center. The country is so narrow that a seven-day transit visa which I could obtain at the border was sufficient. This was very convenient: no visit to the embassy, applications, and waiting time. I just appeared at the border, the passport was stamped, paid, and gone.

I had enough visits to embassies planned for Lomé. I arrived on a Thursday and immediately went to the embassy of the Republic of Congo, also known as Congo Brazzaville. 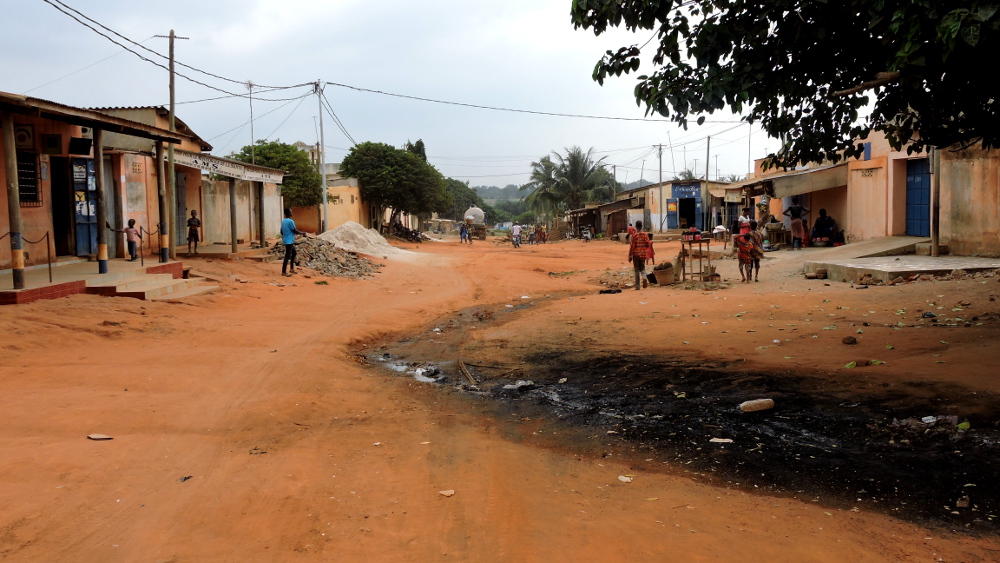 The road to the embassy was good preparation for the roads in the Congo. Sometimes I get the impression that the first test for the visa is whether one finds the embassy.

I arrived shortly before the lunch break. The nice officials helped me to complete the application. I could come back after lunch to collect the visa.

I camped outside the city at Coco Beach. It wasn’t the closest place but it was well worth it. 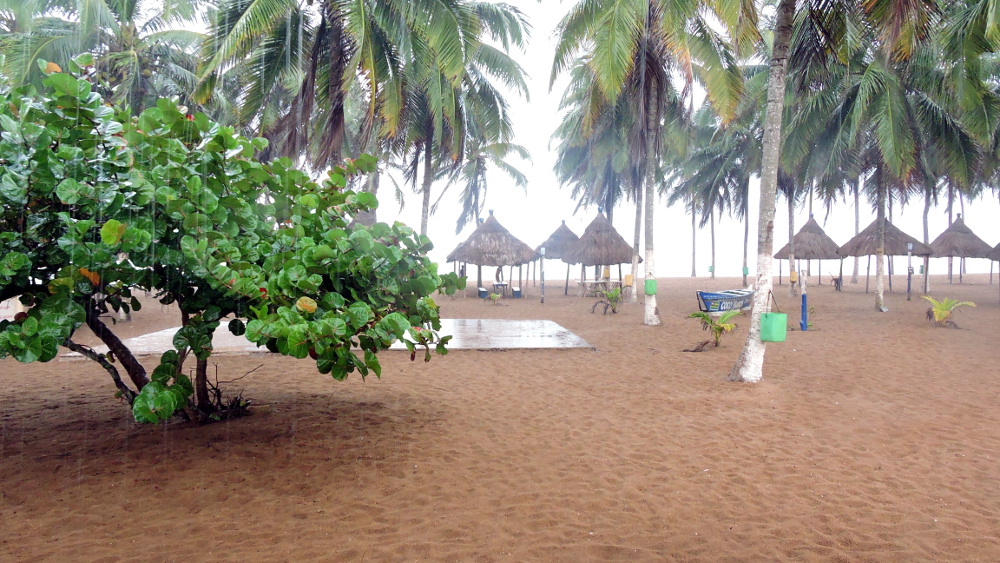 What a place of calm after the hectic and traffic-filled city. I found everything I needed: a nice place to pitch my tent, a bar with Wi-Fi, quiet, and if I felt like it, a good place to eat.

On Friday I had to return to the city to get a visa for Gabon. 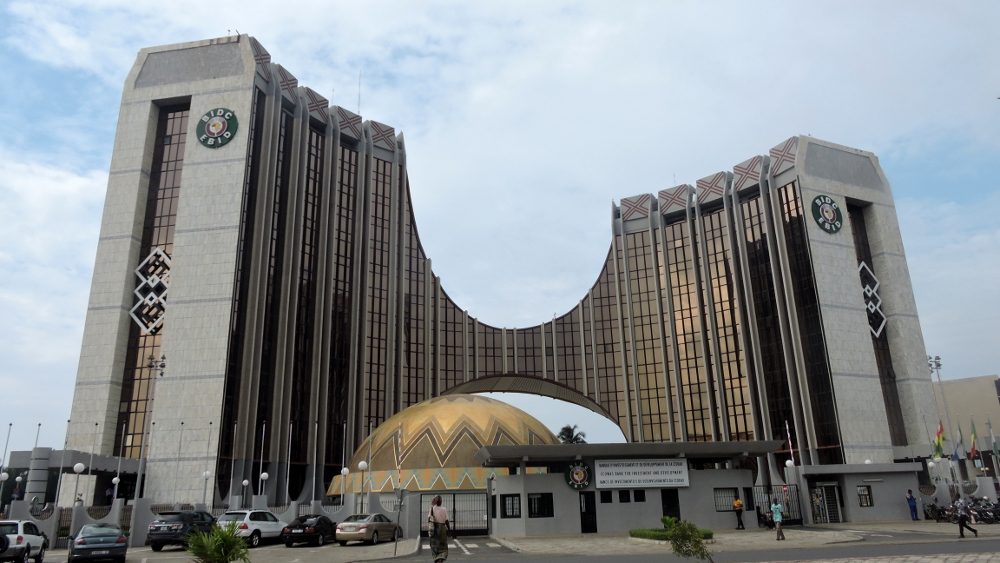 Of course, the banks were the largest and most modern buildings. The security guards weren’t so happy that I took photos of them.

This city has three different categories of roads: four-lane, much traveled and paved. The next category was cobble stone and one lane in each direction. And then there were many roads in Lomé which weren’t surfaced at all.

It wasn’t exactly a joy to navigate those roads but at the end of the day I could return to my camp ground. 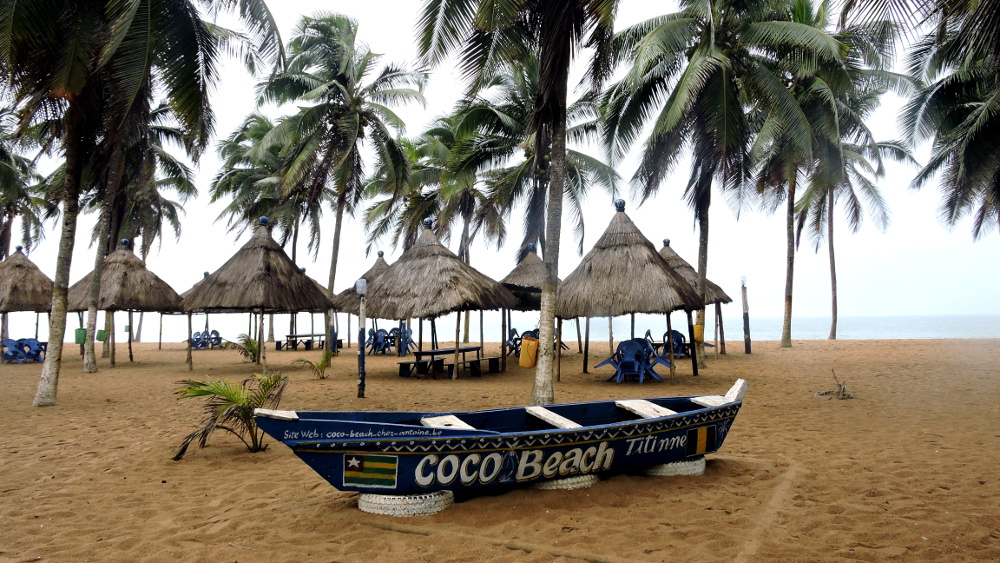 I handed in the visa application on Friday and then had a weekend ahead of me. All embassies were closed. That left time for the usual chores of a bike traveler: laundry, bike maintenance, trip planning, and if the laptop held up, work on the blog. The computer suffered even more than me from all the hardship and high temperatures. 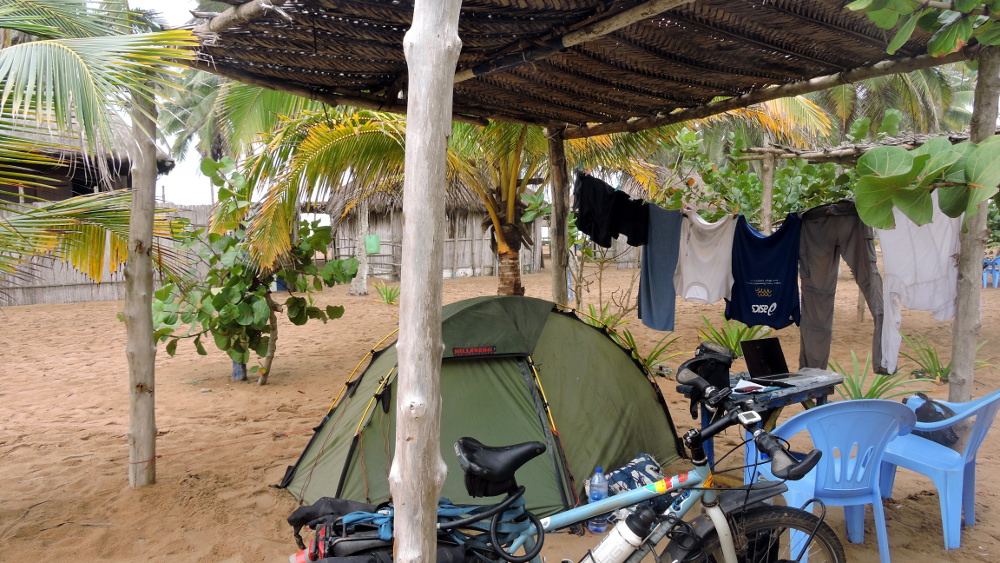 When I went to town, I passed by “Chez Alice”. Alice Mettler emigrated thirty years ago from Switzerland and settled here. Today she is well 70 years old and a well-known destination for the overland travelers.

I preferred to camp at the beach but I went there for entertainment and her home-made ice tea. The house is decorated with a mix of Swiss cowbells and Togolese fetish.

The weekend went by too quickly.

Monday morning, I went back to the city and my first destination was the embassy of the other Congo, Congo Kinshasa. The road there left much to be desired. 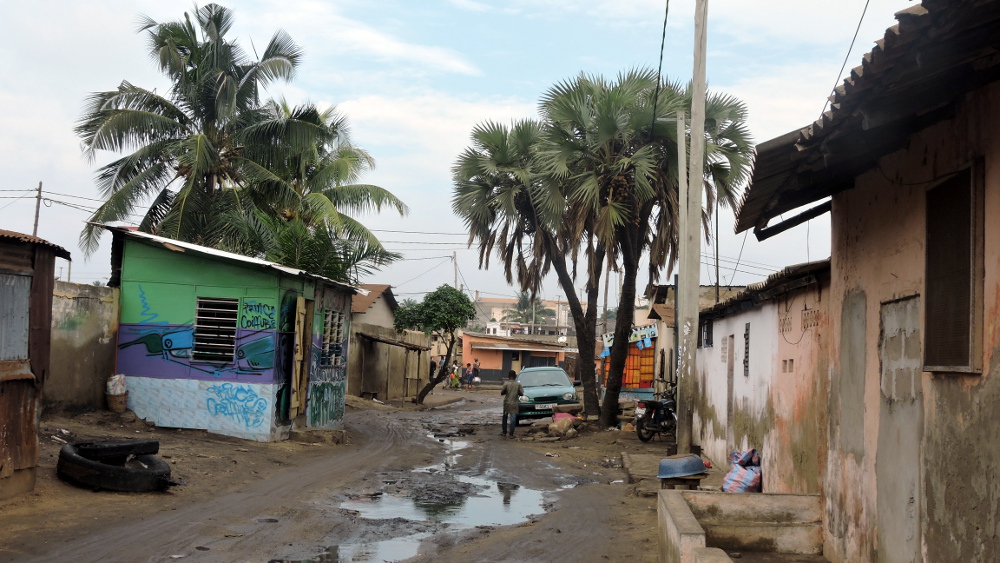 My application was immediately rejected. I had known that it’d be better to apply in Cotonou, Benin, but I thought I should try.

In the afternoon I could collect my visa for Gabon. Amazing how quickly it could work.

I cycled along the beach with tailwinds and quickly made my way to Benin. 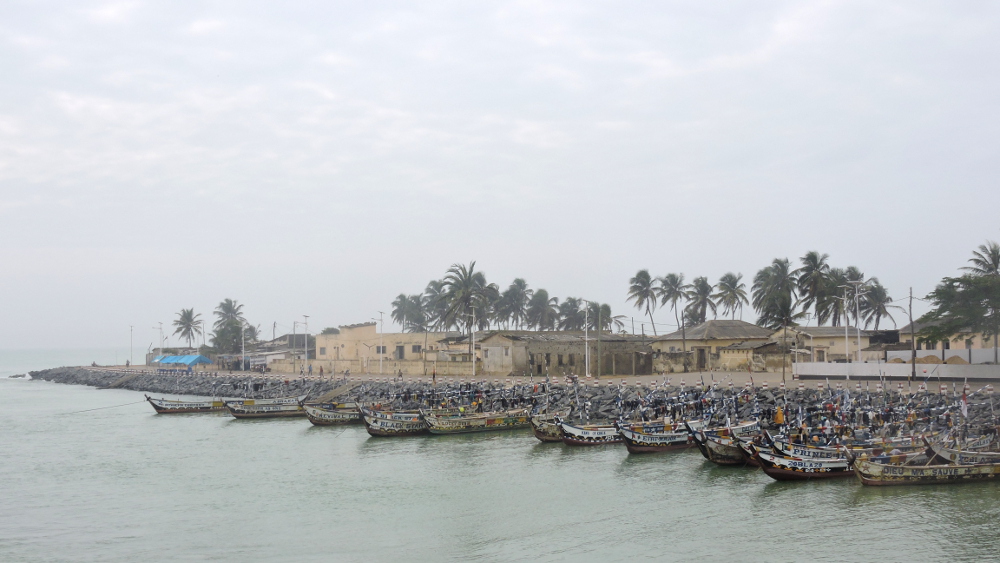 It went so easily on the flat road that I reached Cotonou in the evening.

The next morning, I was back at an embassy and hoped this time I’d have more luck with Congo Kinshasa.

The staff were very friendly and asked me to come in. One was very interested in my travels. Then I was ushered in to meet the ambassador. I completed everything and handed in the forms. He said to come back at 4:00 pm to collect the visa.

I had packed up in the morning and wanted to continue in the afternoon once I had obtained the visa. I managed to move collection time forward to 3:00 pm.

Enough time to take care of the most important things at the internet café.

Then I left this giant harbor city. There was a bike path along the national road which meant that it was open for all two-wheelers and very narrow. My fully-loaded bike almost took up the whole width. Most mopeds managed to squeeze by.

On my way to Porto Novo, the capital of Benin, I passed Ganvie, the Venice of Africa. 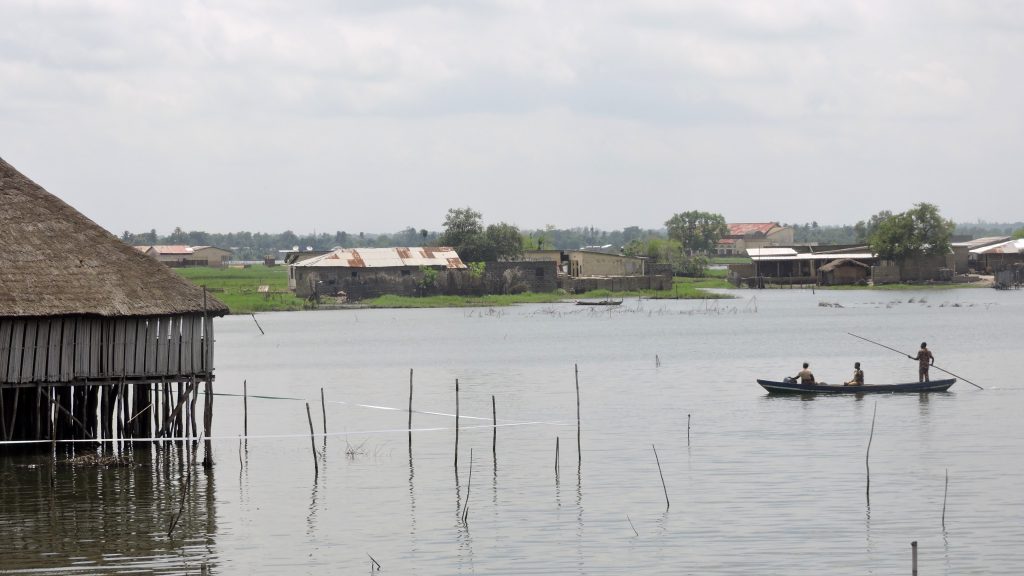 All houses were built on stilts.

After the next big city, I got an invitation from a young man to camp in his garden. 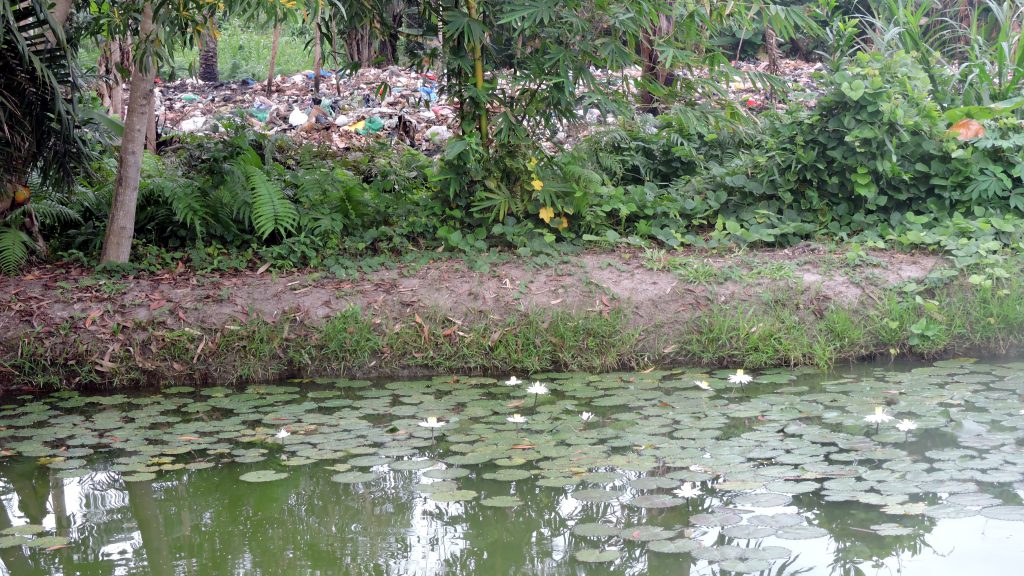 It was a beautiful big garden and an idyllic place in the middle of chaos. Sadly, as it happened so often in Africa, there was a garbage dump right next to it.

In order to avoid the chaos at the big border crossing to Nigeria, I went north to Ketou. 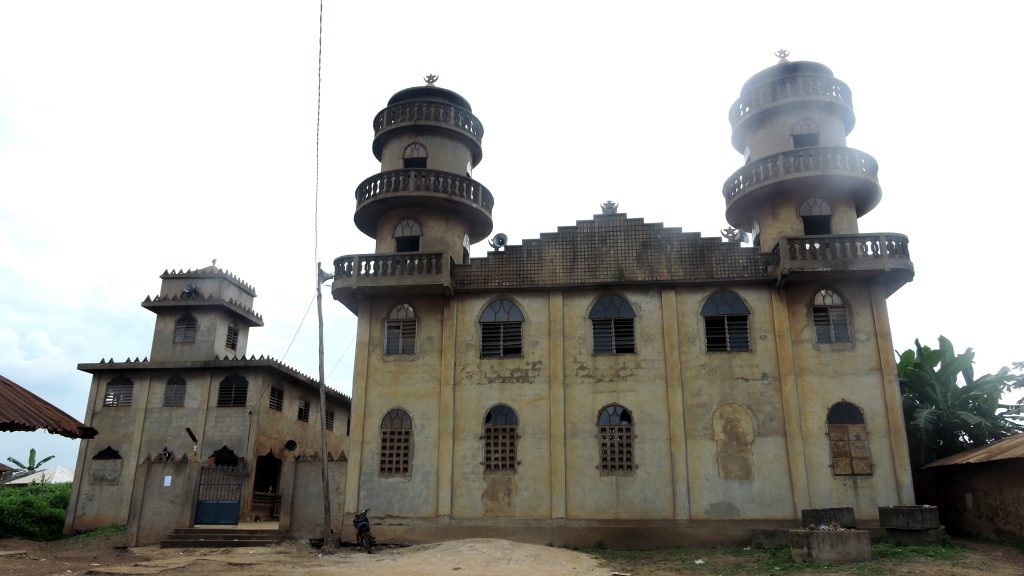 Only about 27 percent of the population are Muslim but there is a very old and large mosque.

From there it was a short distance to the border. Next morning, I left the country without any problems.

Read on to find out if I was allowed to enter the twelfth African country on this trip.