Startseite » Africa tour in English » The other Zambia

My infections were diagnosed remotely. A doctor thought it looked like erysipelas. A female doctor stated “you came very close to life-threatening blood poisoning…”

One really shouldn’t take chances with it.

Therefore, in case you got infections which don’t heal and continuously get bigger, make sure you quickly see a doctor.

Since then my travel pharmacy also includes antibiotics, antibiotic cream, disinfectant, Diclofenac (infection retardant) and a lot of dressings.

Zambia: from Lusaka to Victoria Falls

For several reasons I had chosen Lusaka as a returning point for Germany. I could easily enter Zambia and tickets were affordable. And I thought that starting in Lusaka, I’d experience a different kind of Africa. Did I get it right?

The bike and I had had a complete overhaul when we landed in Lusaka. 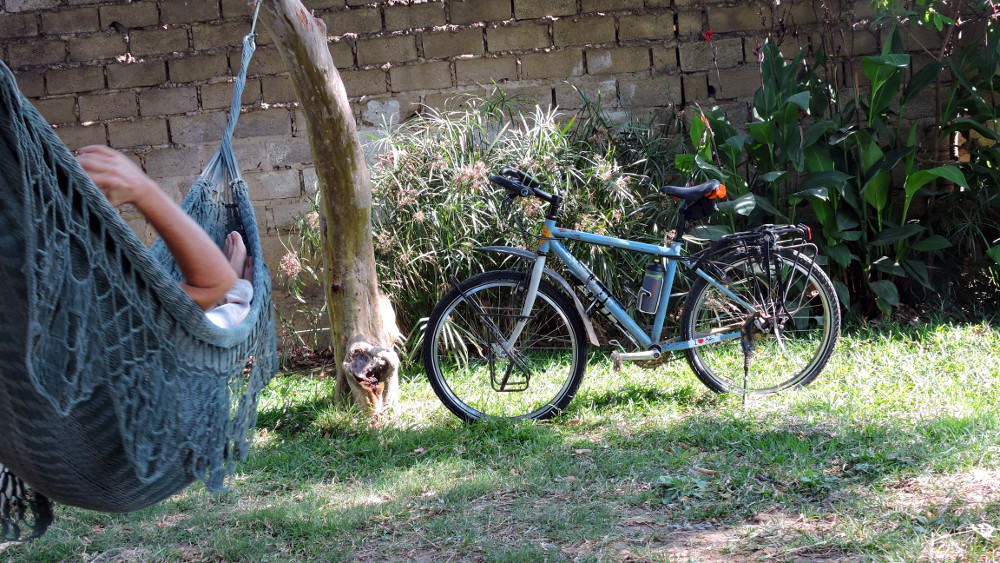 Many thanks to Velotraum for the thorough maintenance of my bike.

Marcelo whom I had met four weeks ago in Lusaka was still around. We decided to travel together for a while. That was a big difference to the earlier Africa. Since Morocco I hadn’t had a buddy.

I had just reached the main road in Lusaka when I met a young Chinese couple on bikes. They also were on their way to South Africa. They had a Jeep-escort front and back on their way through Lusaka.  I joined them and thus arrived very safely at my rendezvous point with Marcelo. 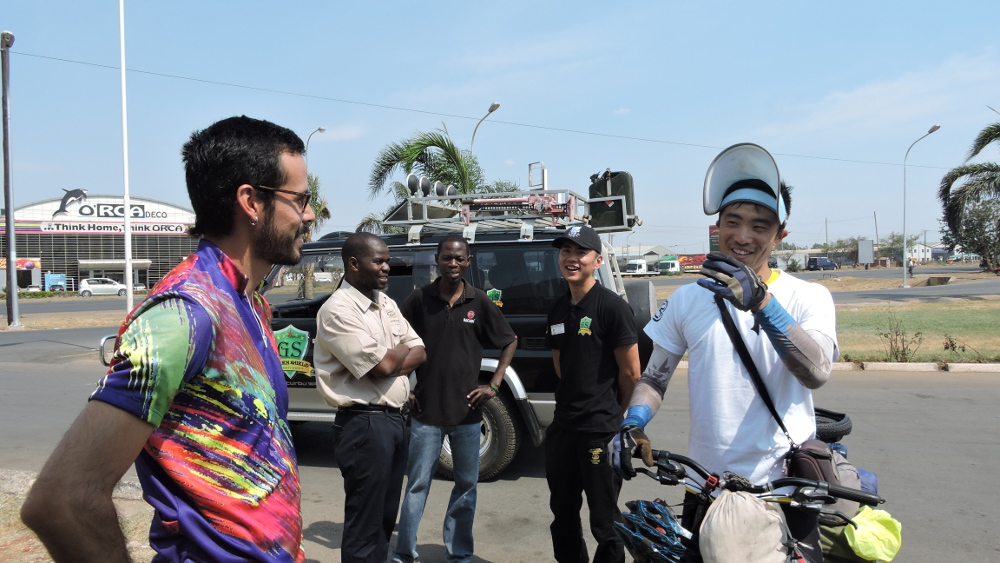 It really seemed that there were more cyclists here. The roads were paved and one had a lot of choice for food.

We had hardly been on the road for a day when Julie invited us straight into her home. I really had arrived in a totally different Africa. 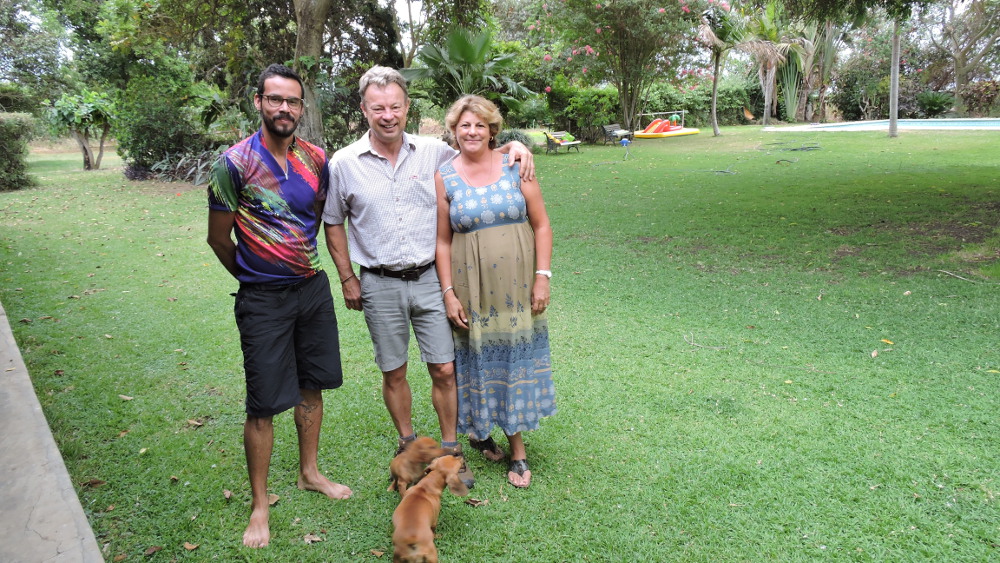 Her husband was the manager of a sugar cane plantation. Marcelo and I spend a luxury weekend here. 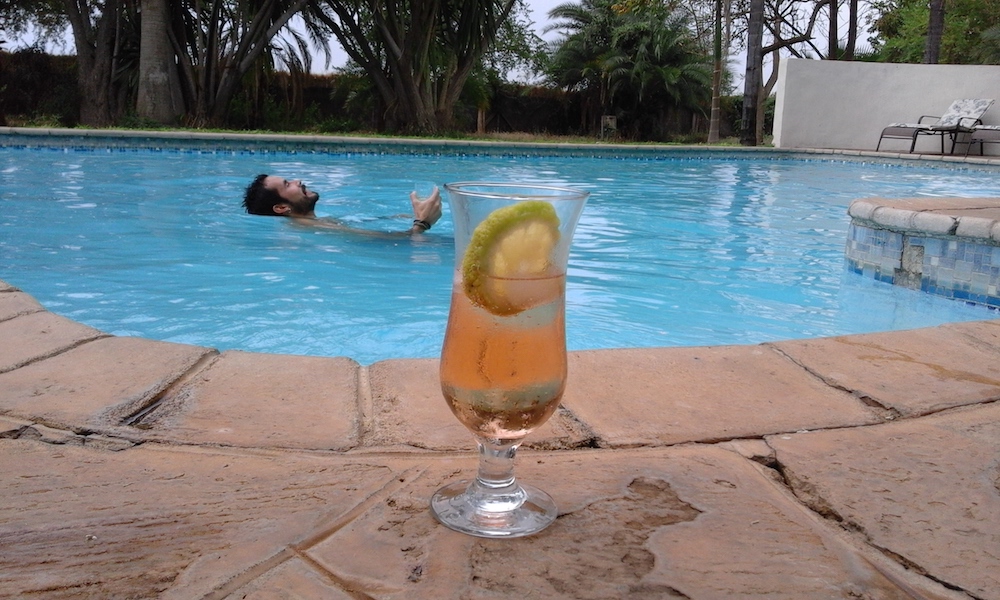 On the way to Livingstone we asked at schools, farms, or clinics whether we could camp and it was always allowed.

Once it was a radio station. In exchange for an interview 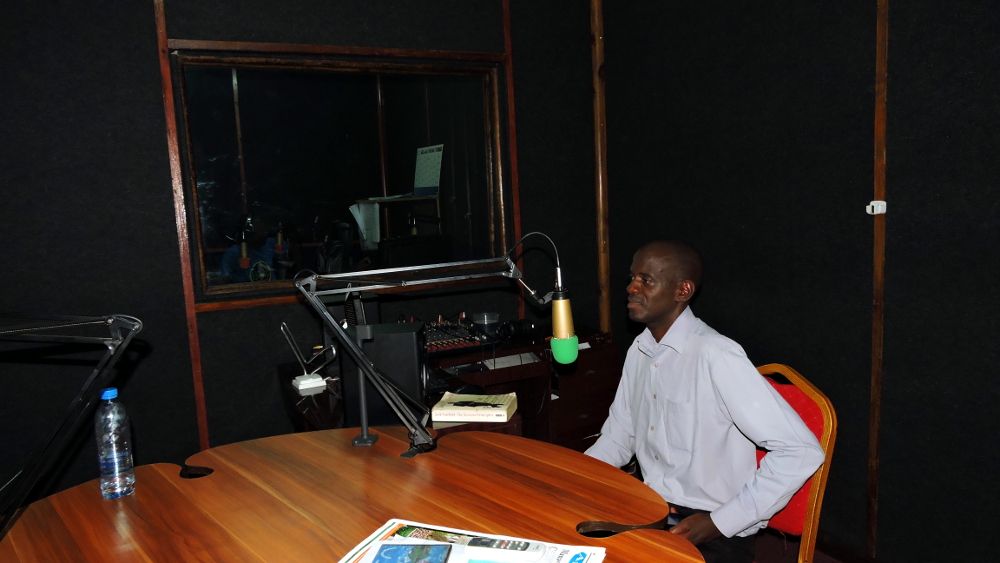 We could camp in the garden.

Most Africans find it hard to believe why we undertook such an arduous bike trip. Therefore, our host had great interest to explain this conundrum to his listeners. We had a safe and quiet night.

In the small villages it was pretty evident that hardly anything grew there. 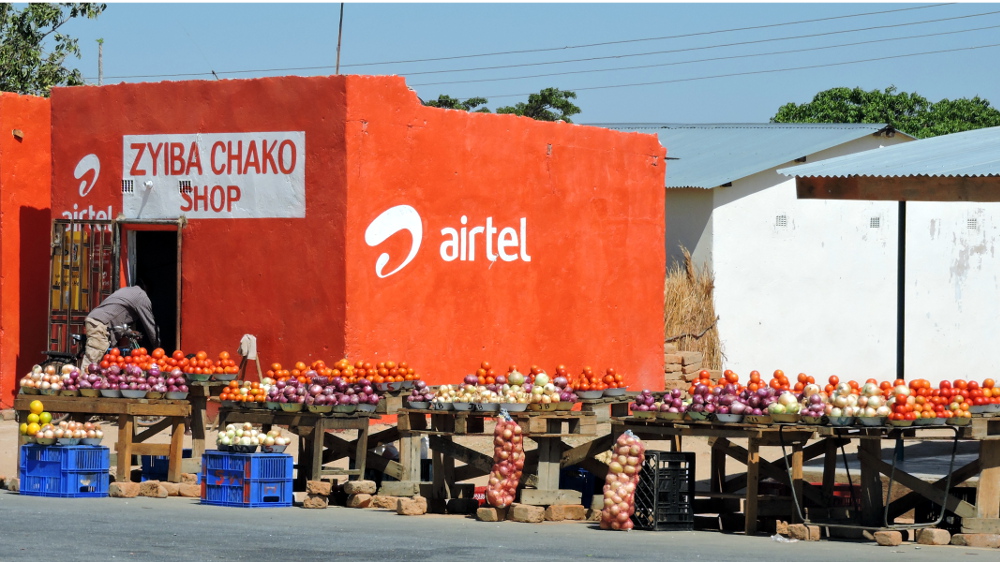 Just about the only things one could buy at the market were tomatoes and onions.

Many things had to be imported which were unaffordable for the general population. Meat was the staple food.

The road from Lusaka to Livingstone, southwest of the Victoria Falls, was one of the main tourist routes. Therefore it was in top condition. 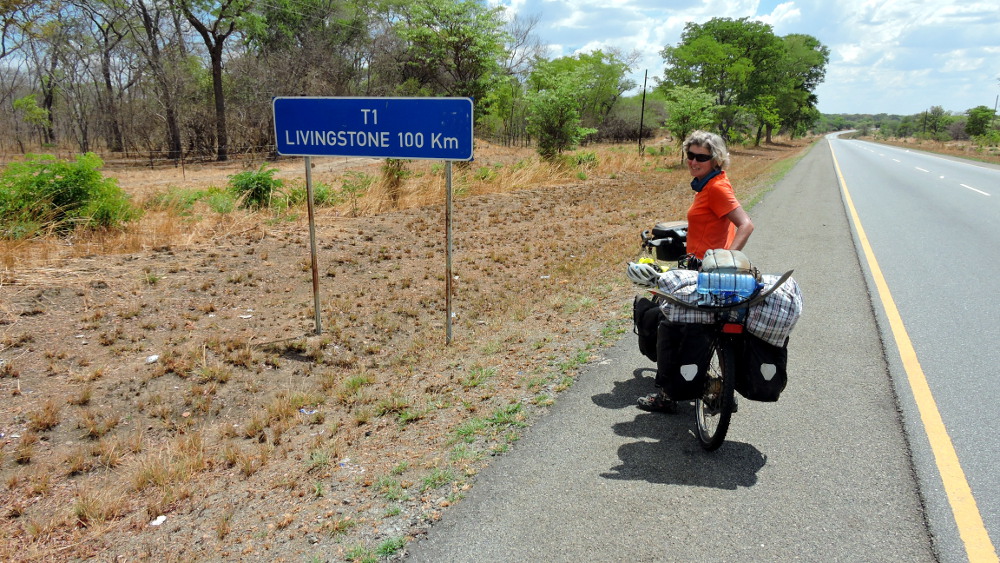 I had no desire to once again get a lift on a truck. There should be no more need for that.

The good roads meant that there were a lot of other cyclists. 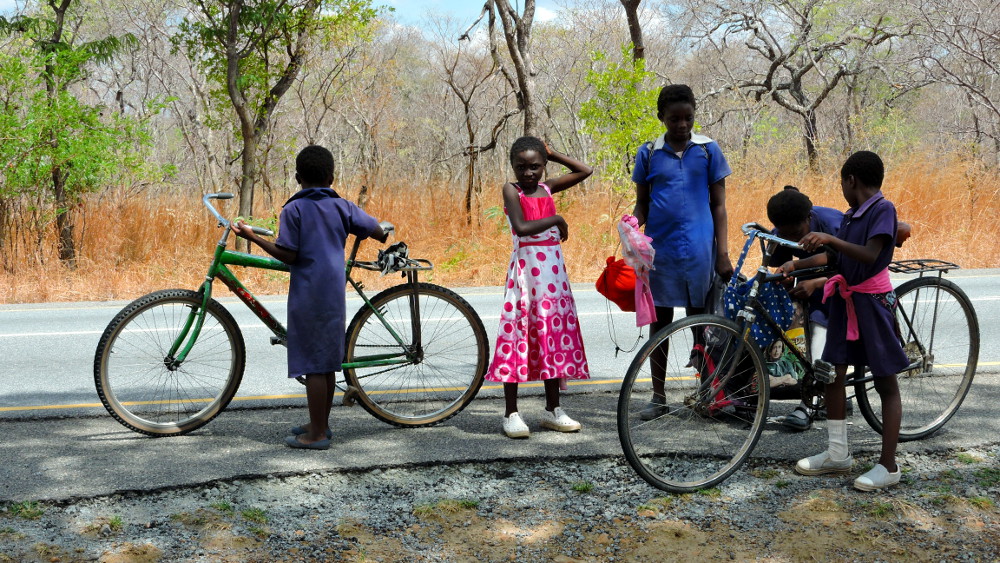 What a luxury if one had such a beautiful bike to ride to school. The siblings of course came along.

They turned onto small tracks because their villages were far away from the road.

Not only the way to school was very long. Traders and nurses also traveled long distances and a bike would be a big help. The “World Bicycle Relief” project was started to make sturdy bikes were affordable. I already reported about the Buffalo Bicycles 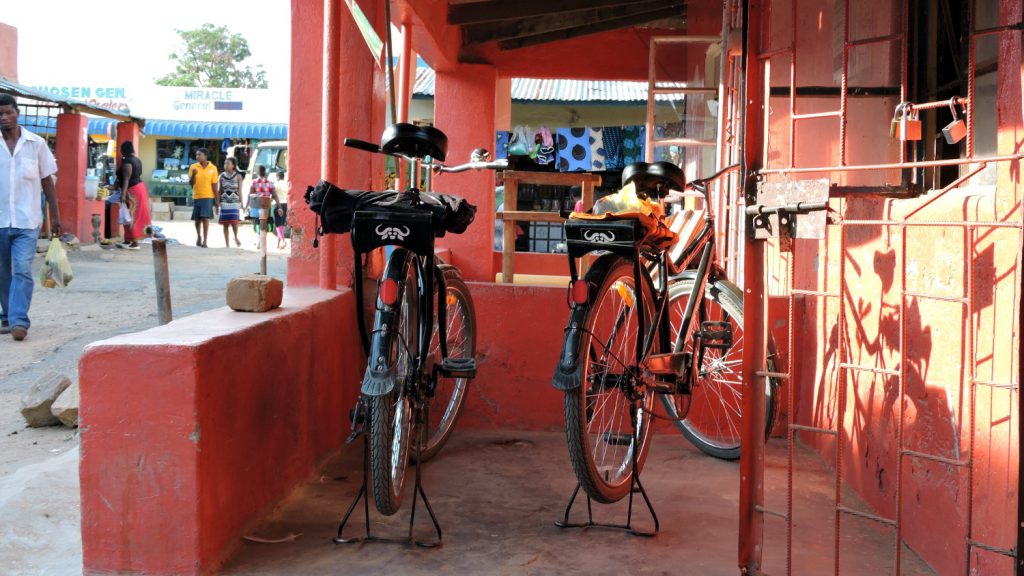 Soon we arrived in Livingstone. This city at the Victoria Falls had everything to offer: big shopping malls and a lot of accommodation to choose from. 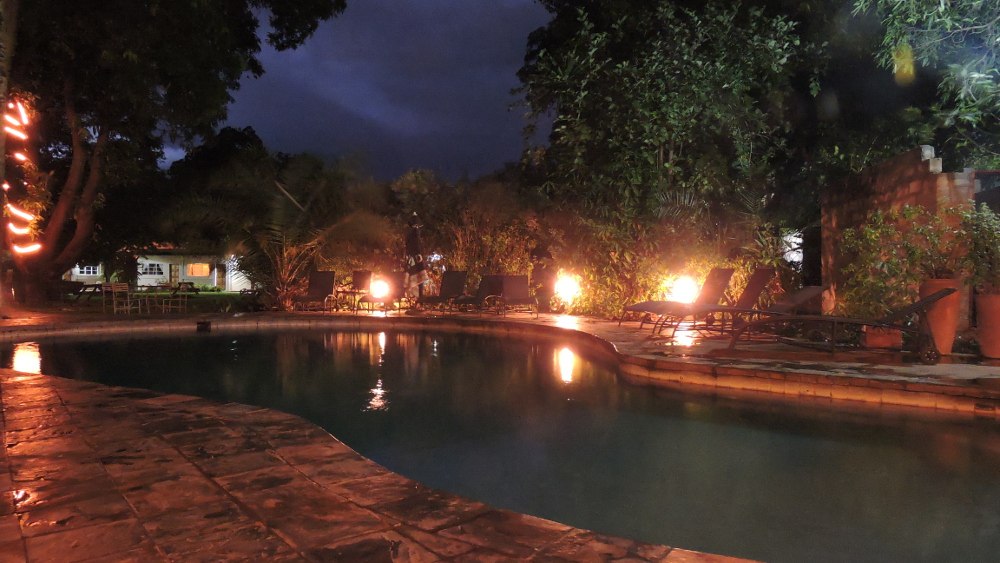 Marcelo and I opted for “Fawlty Towers”.

We had been told that the Victoria Falls were almost dry but we didn’t want to miss them. Once again it was interesting to see what it looked like behind the water.

First, we were greeted by monkeys. 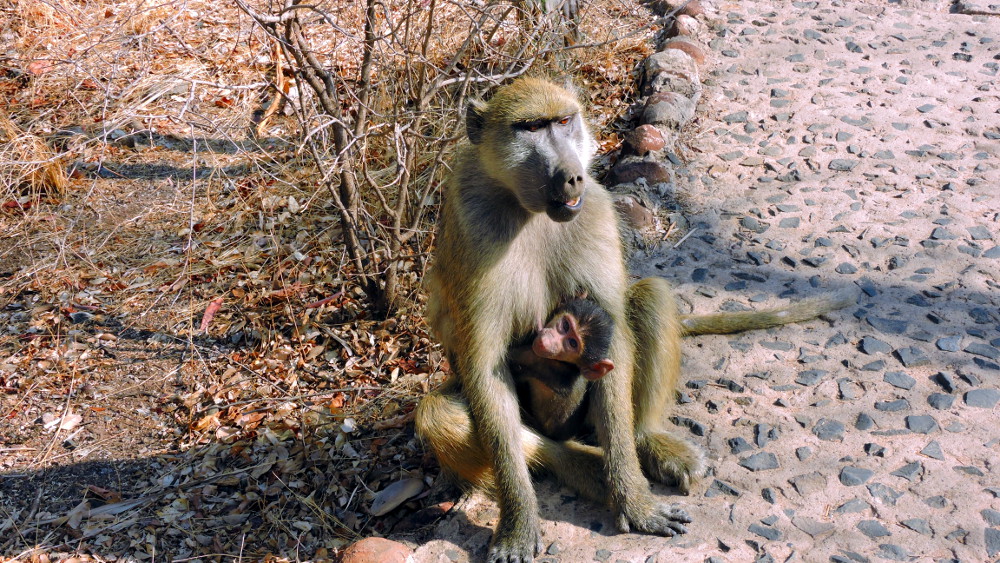 Wherever there were tourists, there were monkeys. Fortunately, these weren’t aggressive or dangerous.

The waterfall gorge looked impressive even without water. 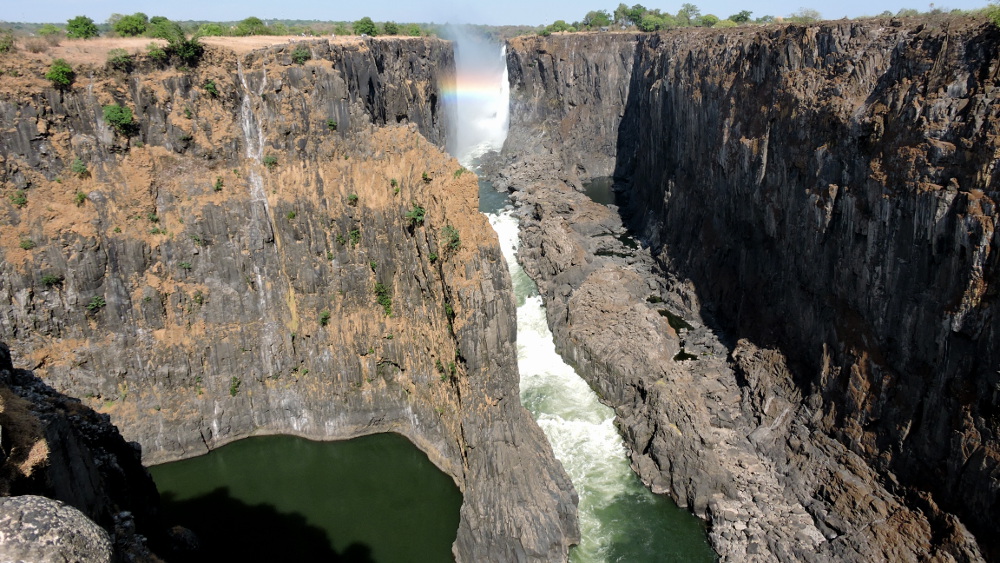 Above the waterless falls one could easily walk around. 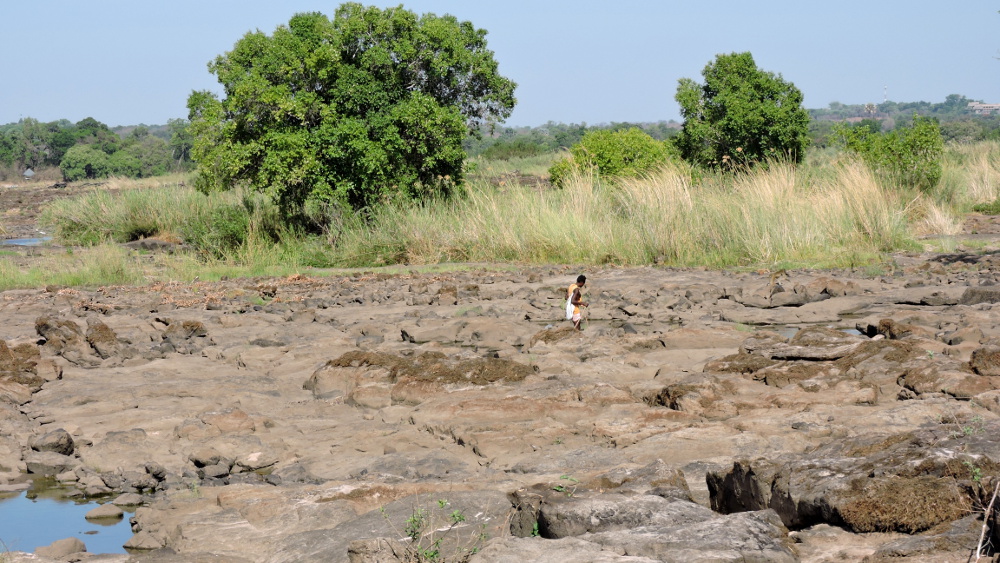 Zimbabwe was on the other side of the Zambesi and more water was on show there. 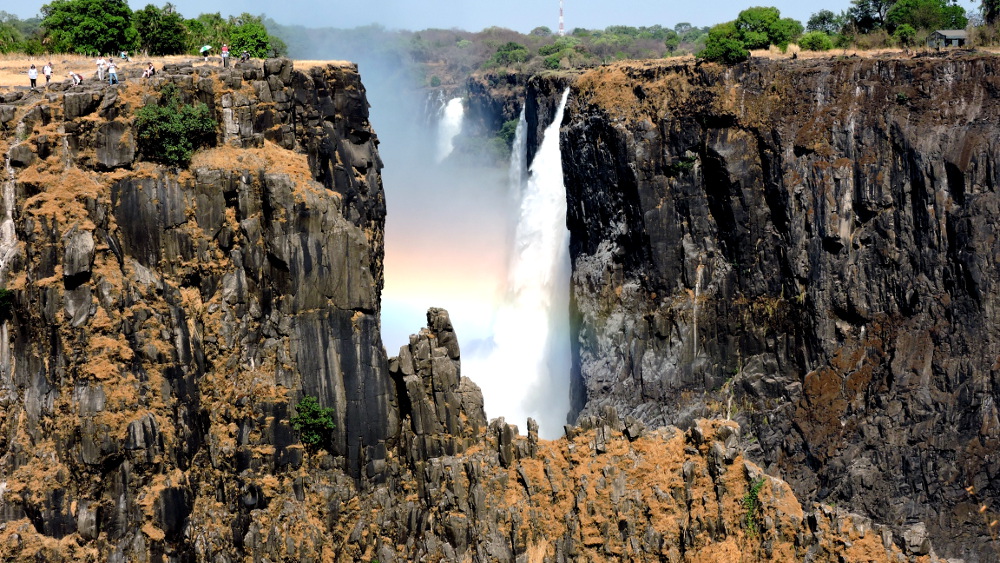 The Victoria Falls Bridge was over one hundred years old and connected the two countries. 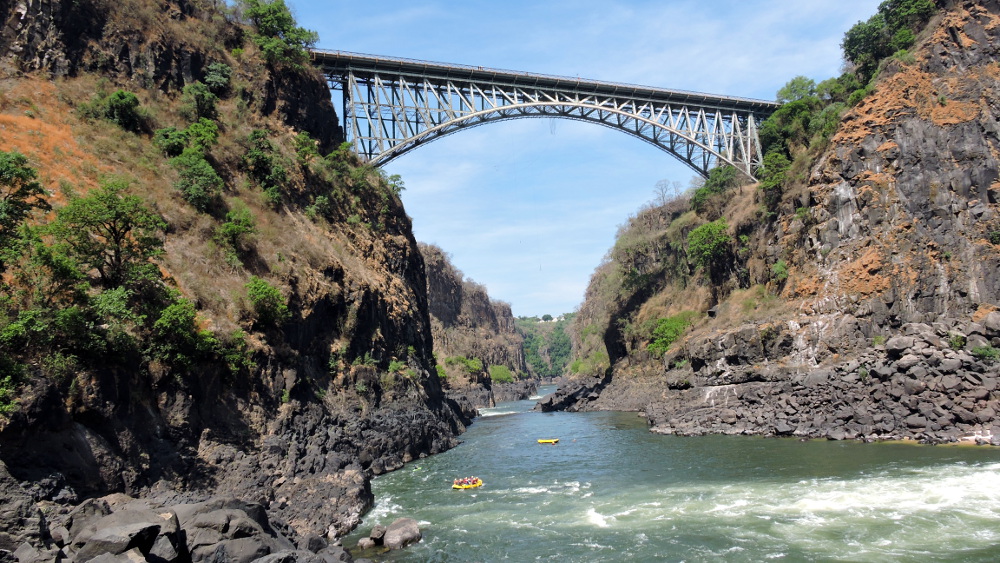 Next morning the waterfalls had arrived at our doorstep. 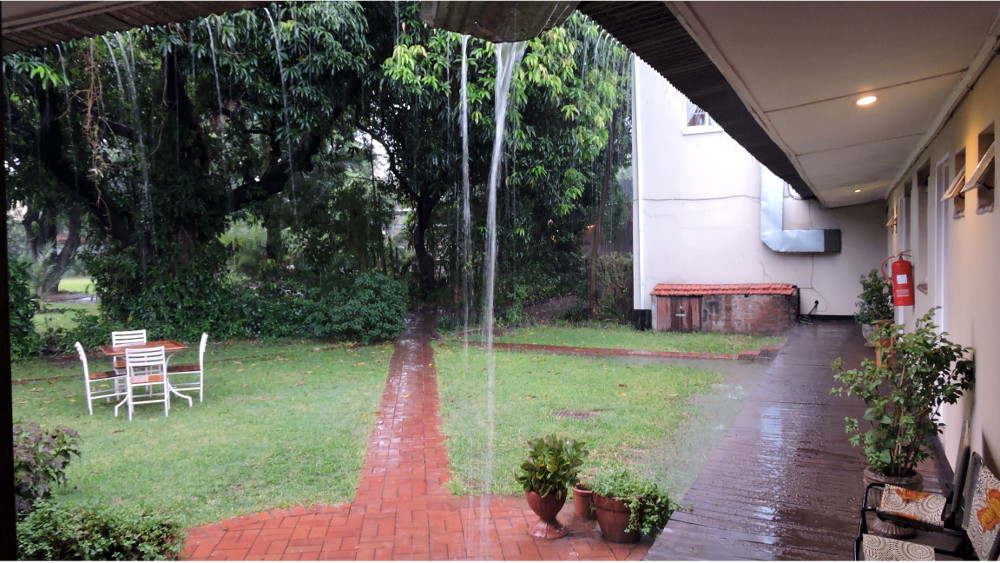 Finally, the long overdue rains had arrived which didn’t prevent me from cycling across the Victoria Falls Bridge to Zimbabwe.

The bridge is one of the places which got famous for bungee jumping. 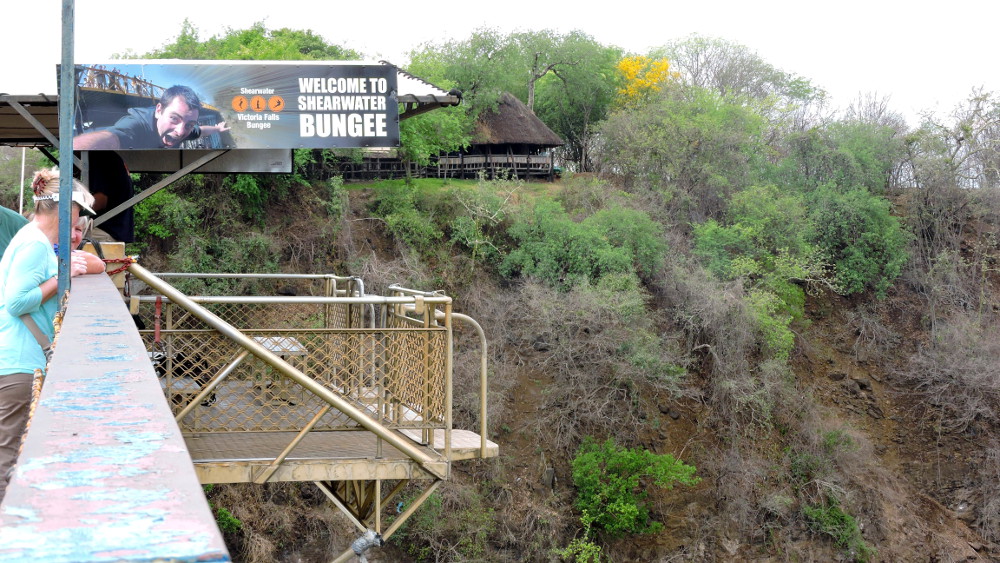 Sadly, there was no one who jumped into the void. When you travel by bike, you get a lot of adrenaline rushes and you didn’t need such “adventure”.

I was in Zambia for three weeks and cycled 1,014 kilometers.

Next up was Zimbabwe where the situation wasn’t so rosy. Several times I had been warned against attacks. Next time, you’ll discover what it was really like.