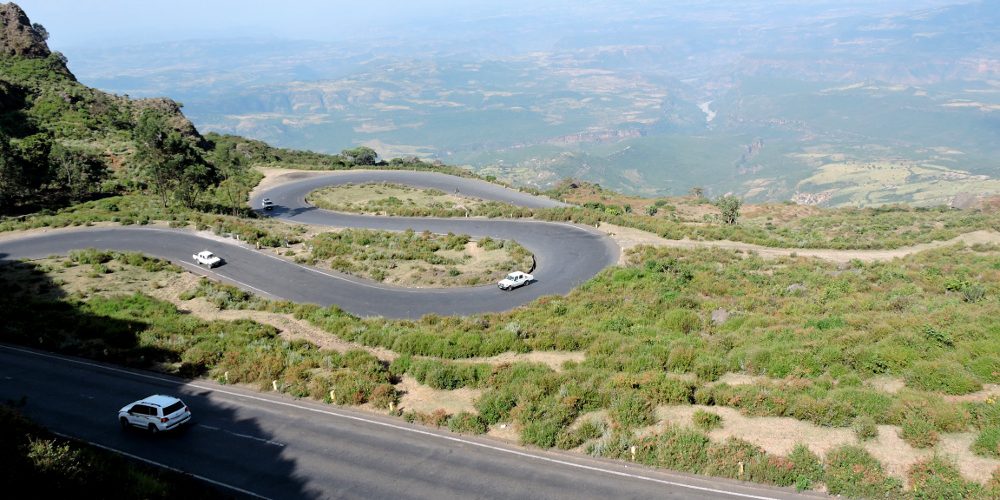 Startseite » Africa tour in English » The North of Ethiopia by bike

The north of Ethiopia

During the two weeks in Addis Abeba I had rested well, even so I was busy with visa applications. Now I was ready for the next 1,000 kilometers.

No one had warned me that there would be a long and steep ascent after Addis Abeba. I had thought that Addis’ 1,500 meters altitude already placed it in the “Ethiopian Highlands” but I was wrong. On the first ten kilometers, I climbed another 1,500 meters. Fortunately, the traffic in my direction wasn’t very heavy but sadly I couldn’t get a nice view of the city. It was hidden far below in the smog.

Then it got better and one could almost call the terrain flat. The Les Doudz Family had managed with their truck and had stopped for a second breakfast. 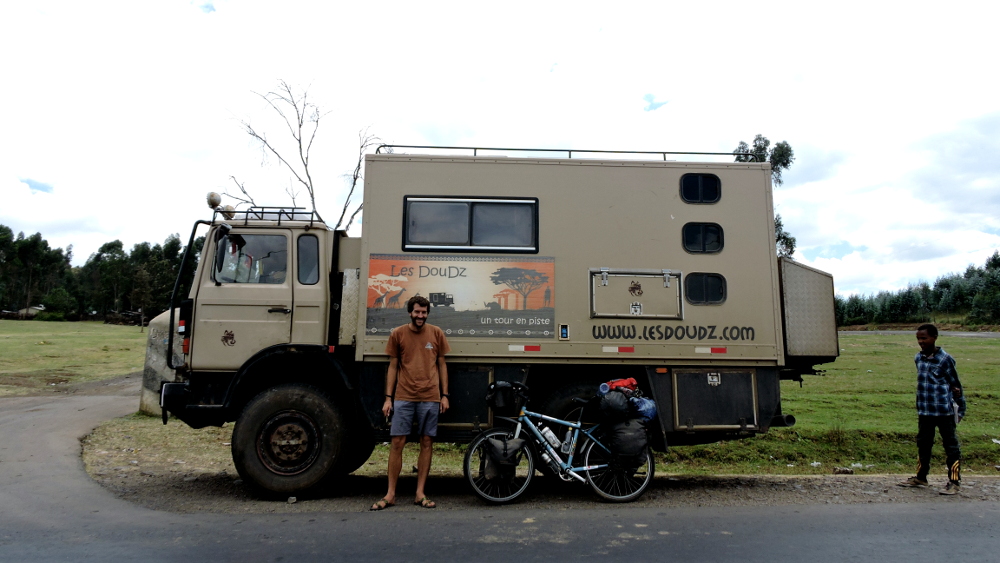 Once again, they offered me a ride and once again I politely declined.

I had thought that Lesotho was the highest country in Africa but I climbed much higher in Ethiopia. The “highlands” were bifurcated by gorges. 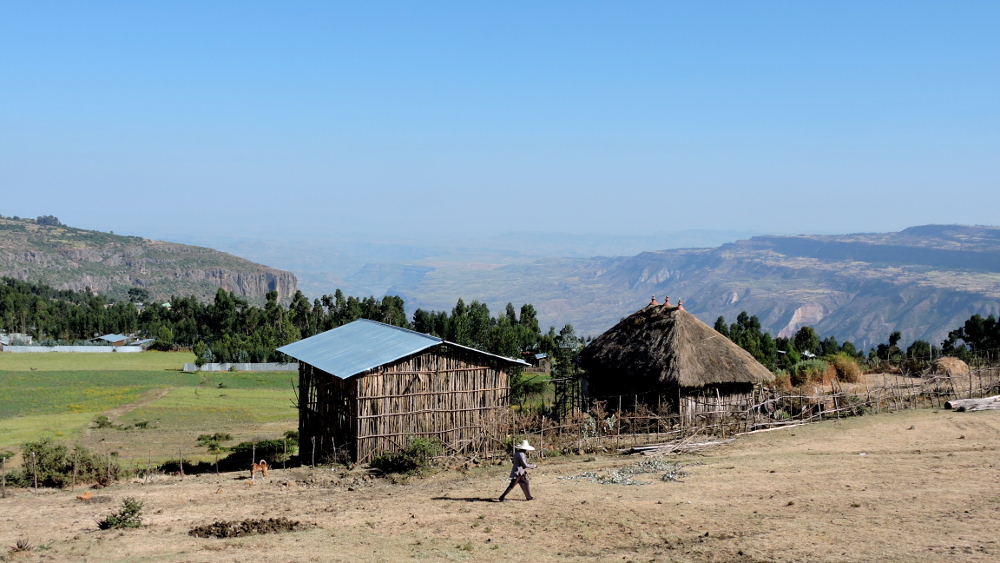 This valley had only a “small” side river.

The road went higher and higher. In Lesotho only the passes were at 3,000 meters but here the road over a ten-kilometer stretch climbed to an altitude of over 3,100 meters. And it was quite cold up there. 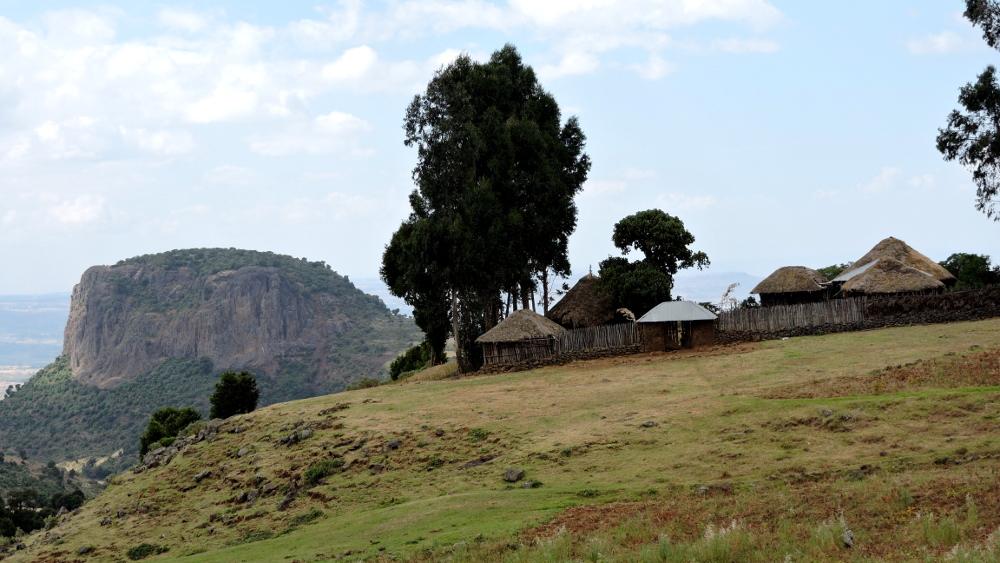 Two or three times I met stone-throwing children. Ignore them, stop a car, and call on adults to take responsibility. That worked well, stone-throwing were only short episodes, and I could enjoy the gorgeous colorful scenery. 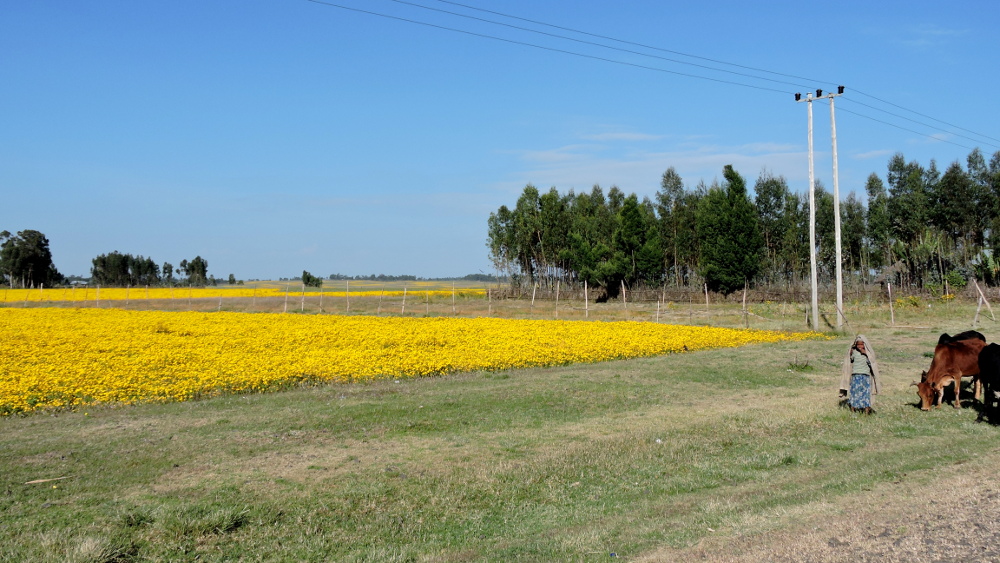 These beautiful yellow flowers weren’t rape and close up they almost looked like St John’s wort. Then there were red fields which could almost have been quinoa. I don’t think quinoa made the journey from Bolivia to Ethiopia.

I had difficulties to get petrol because the gas stations had run out.

At the side of the road were cars that had been torched in the recent unrests. Perhaps that was the reason that fuel was rationed? I didn’t get a straight answer from the people who held back.

Next day, I stood in front of the abyss. 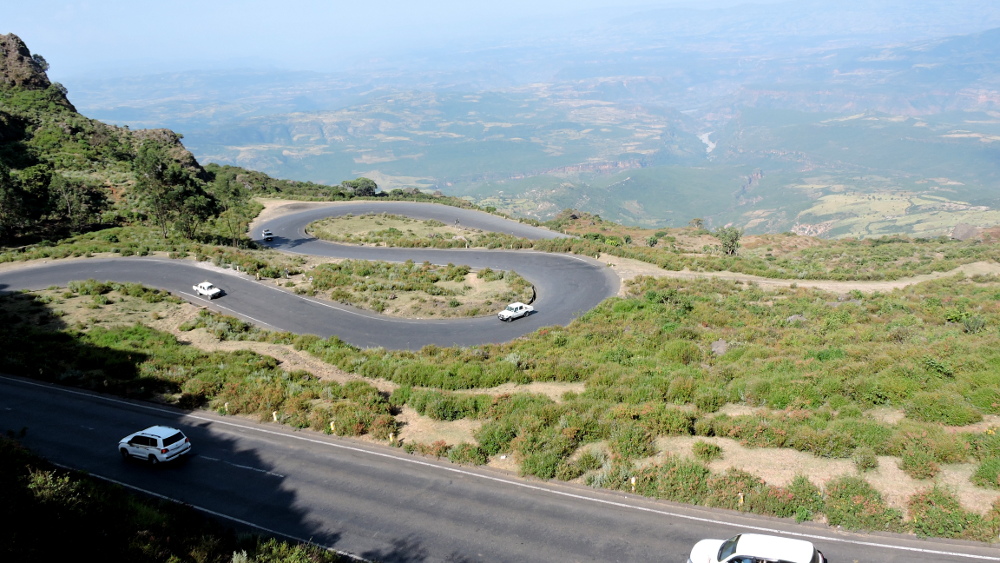 The Blue Nile Gorge. Unbelievable that the river had carved such a deep gorge into the highlands. 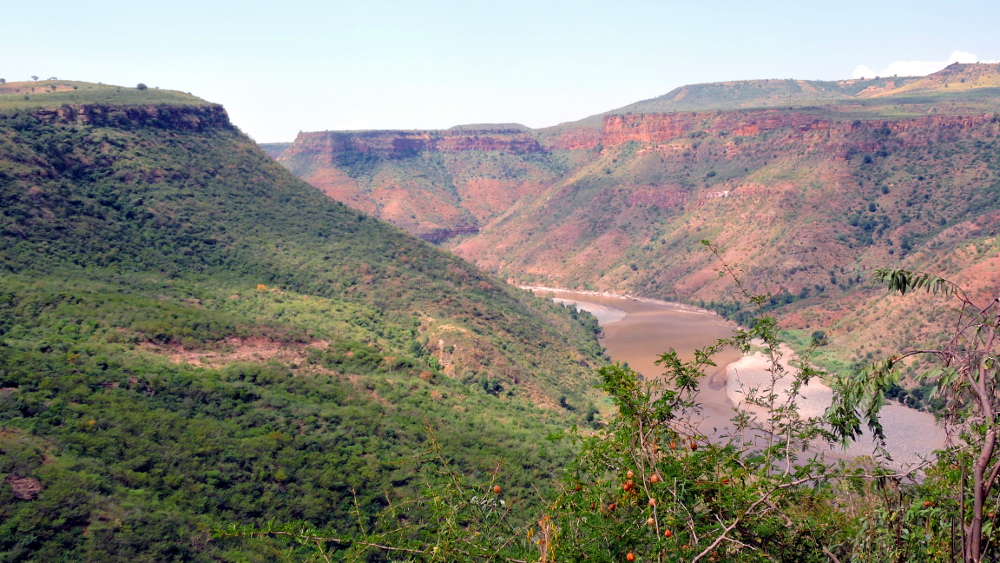 One could have free-wheeled at high speed but sometimes paved roads were worse than gravel. The surface was corrugated every which way. Sometimes there were virtually steps which one couldn’t avoid.

The lower I came, the warmer it got and down below were many monkeys. 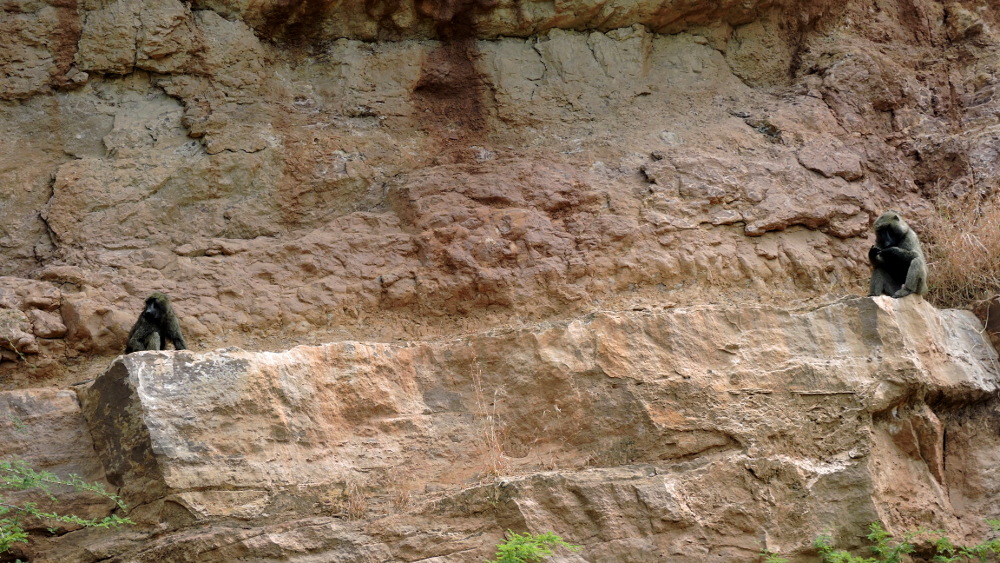 I wasn’t going to take any more photos of them.

On a new bridge, which was heavily guarded by soldiers, I crossed over the Blue Nile. 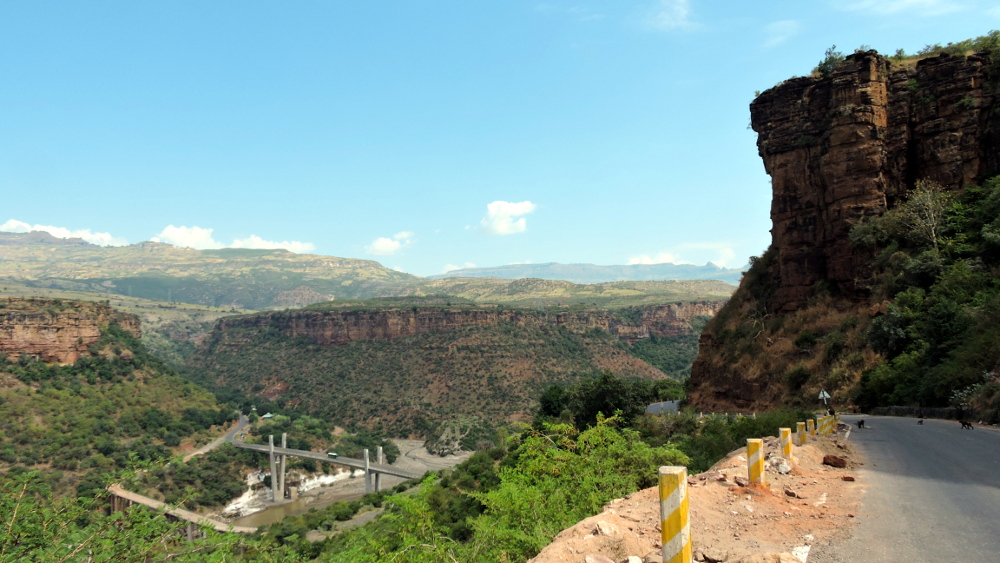 Suddenly it became very hot and then I climbed 21 kilometers to over 1,400 meters. The surface on this side wasn’t any better.

On both approaches, there were houses at about mid-point where one could buy food and drink. And of course, the Ethiopian coffee and its ceremony. 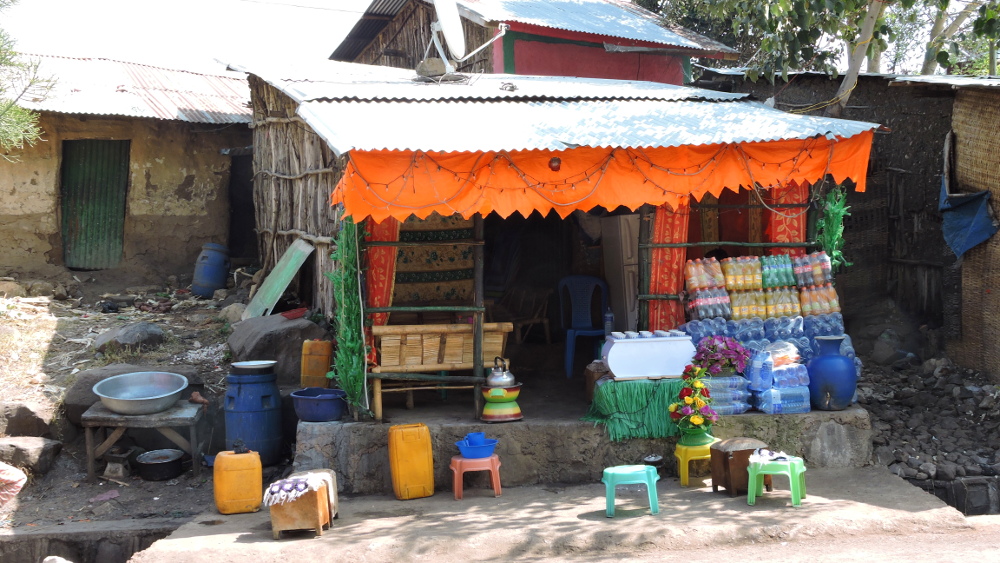 The white box in the middle was for the ceremony. Gras was put at the bottom and a coal fire spread a fragrant smell.

The weather continued to be on my side. It only rained at night and then it was very cool in the mornings. The people were wrapped in white blankets. 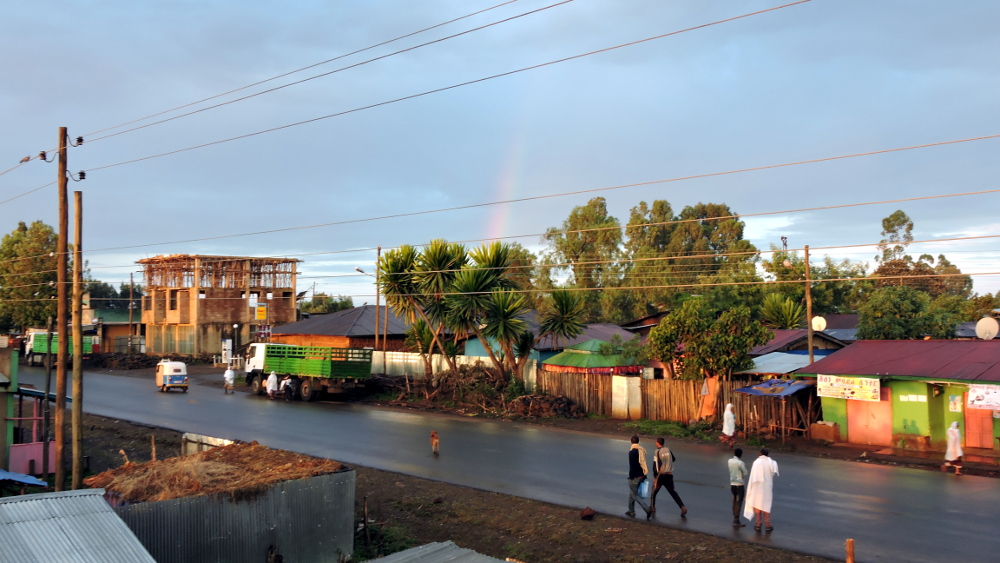 Everything was different in Ethiopia, not only the kids. The food was suddenly very spicy. 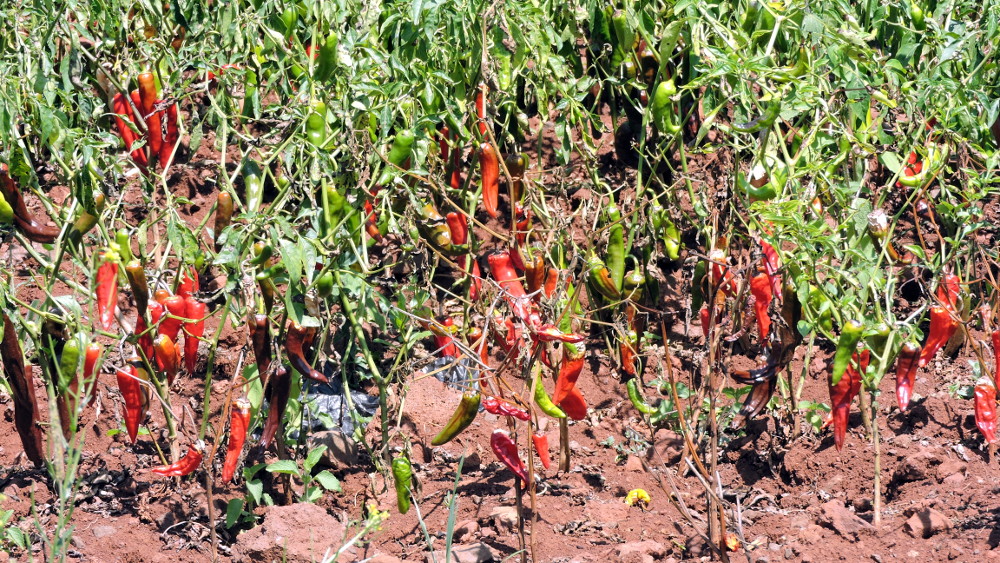 I had quickly noticed the different language, script, and religion and even the time was different. Like in Swahili, 6 am was zero hour which meant that 7 am was 1 am. That made a lot of sense close to the equator where the sun rose around 6 am and set around 6 pm. Nevertheless, in the Swahili speaking countries, people referred to the time in the way I was used to. Here in Ethiopia, I sometimes got confused.

Later on, I noticed another difference. When I bought beer, “Happy New Year 2010!” was written on the label. But it was October 2017! Would it still taste well and could people sell old beer with a good conscience? 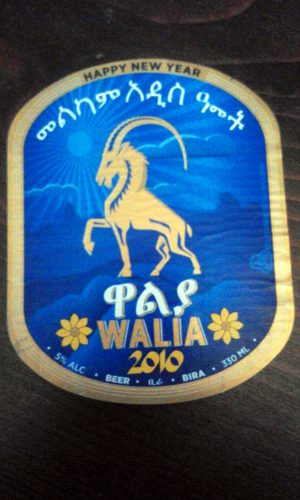 Then I learnt that Ethiopia has its own calendar. New Year’s is celebrated in September and the Ethiopian calendar is 7.5 years behind the Gregorian one. Therefore, the beer had an excellent taste in October 2017.

Each tribe had its own typical clothing. 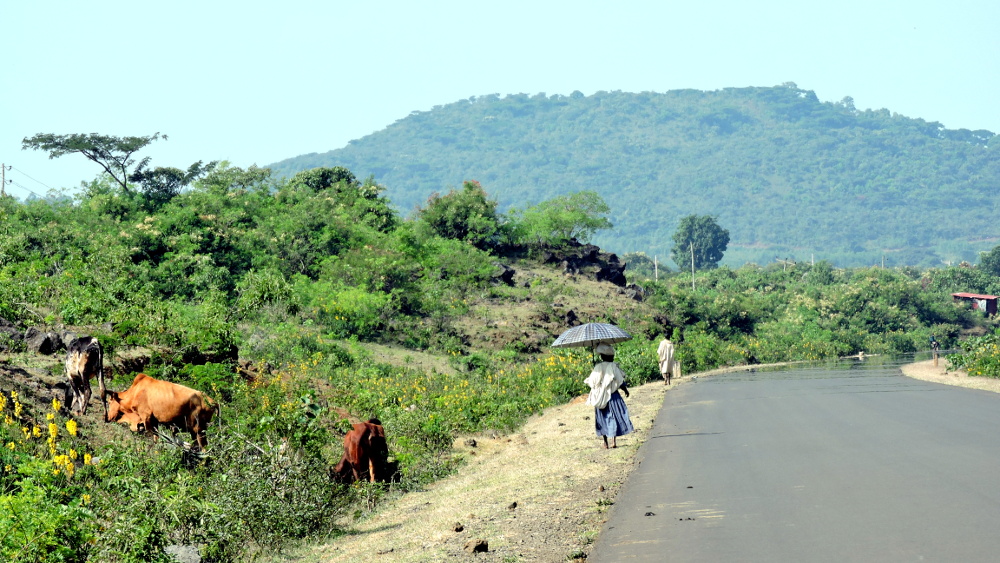 Before Debre Marcos, men wore long trousers which looked like Turkish pants. Very wide on top and tight around the calves.

The cattle herders in the north, wore very short, black, wide pants which almost looked like mini-skirts. They had embroidered hems, usually in the country’s colors of red-yellow-green. The women wore frayed skirts. The fringes were decorated with shells which clicked with each step.

No one yelled “You, you, you” but everyone smiled and greeted me in a friendly manner.

No day resembled the other one. After a great day might come a mediocre one. The kids were stressful and my Garmin broke down. Everything upset me. When that happened, I looked for a hotel early in the day.

Then I had a wonderful day happened with a great descent. The kids couldn’t bother me because I was too fast.

In the evening I met a young man who spoke English surprisingly well. We had a beer and he told me about his woes. He worked for an English NGO but was employed by the government. He said, NGO projects only worked as long as they had staff on the ground. When they left, everything stopped: equipment vanished and reports were falsified so that the NGO would see the need to send someone new to do the work. He thought, It’d be much better, if no one came, and Ethiopians would need to become independent. 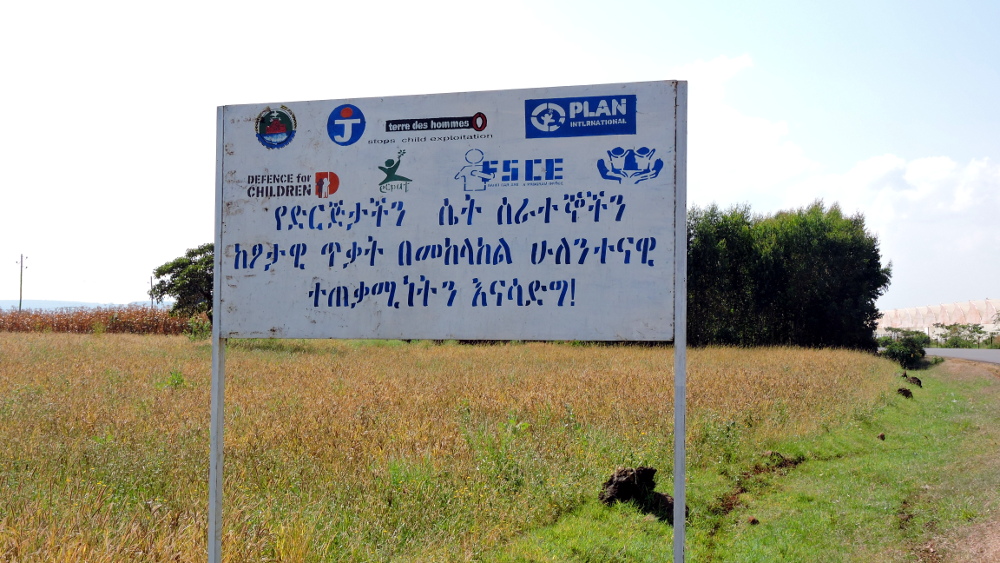 Few countries receive as much foreign aid as Ethiopia but when I looked at the kids, I wondered what were the results?

One of the larger and more important cities in the north was Bahir Dar where I wanted to take a rest day. But there was too much traffic and the accommodation was overpriced. I took a short walk along the lake, went shopping, and continued the next day. 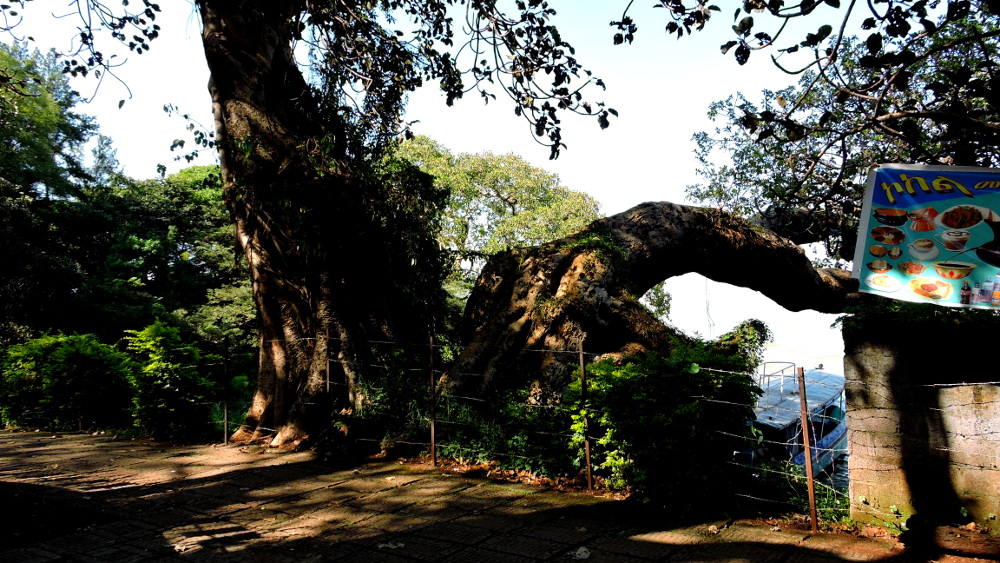 The scenery was magnificent. 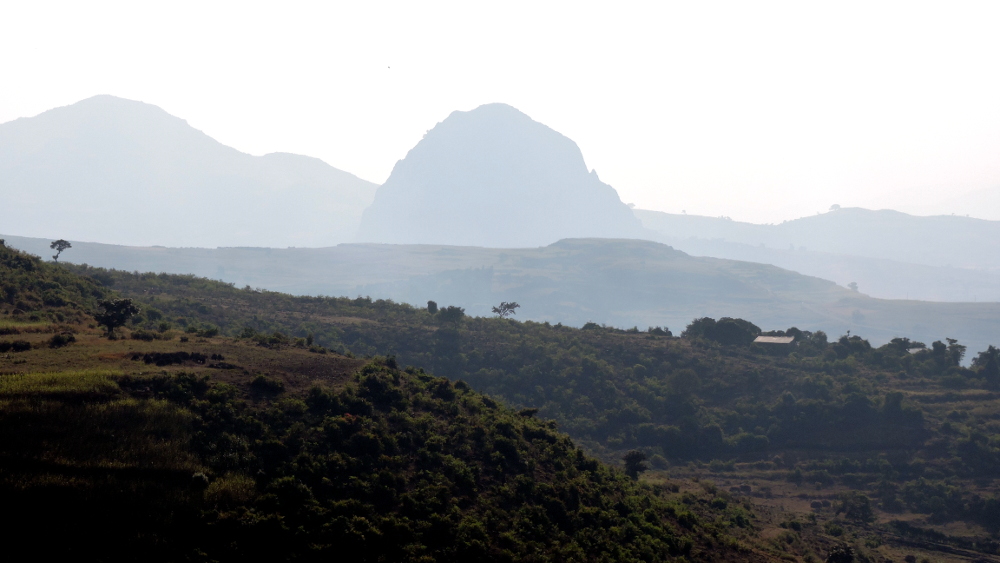 Once again it became mountainous with fantastic rock formations. 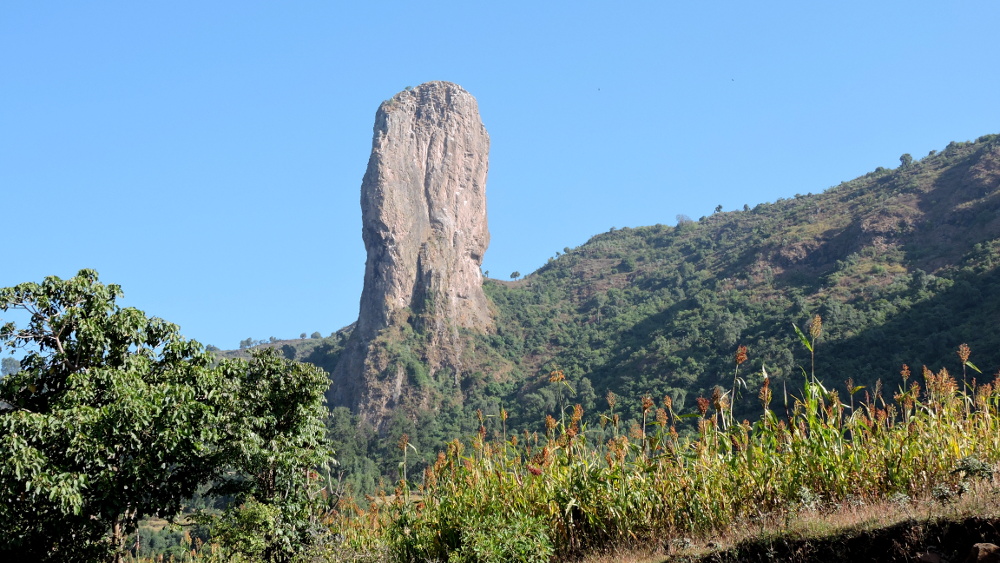 Cyclists who planned to avoid Ethiopia because of the children, would really miss something.

Without doubt, Gondar was one of the most impressive towns in the country. 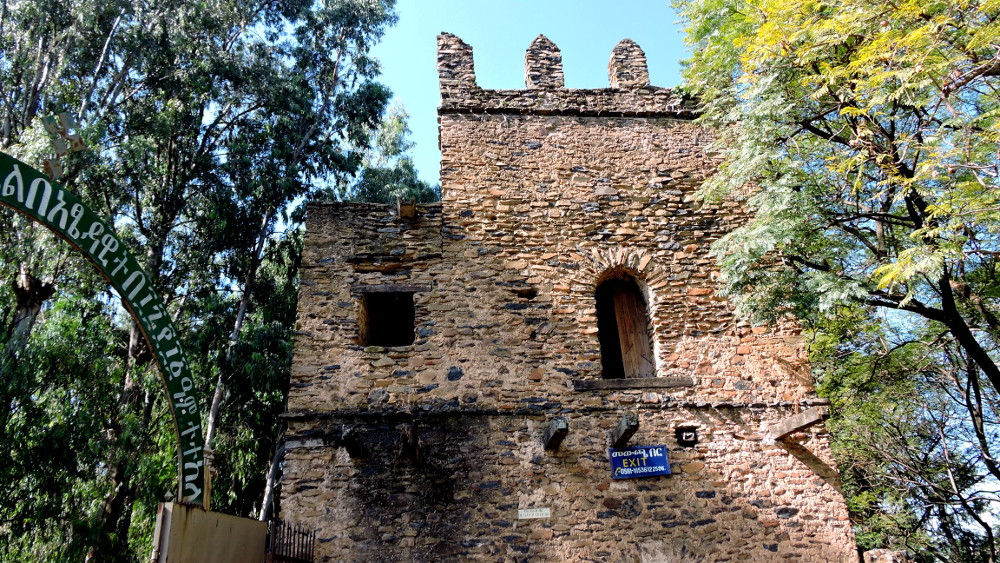 It had been the first capital of Ethiopia, or rather of Abyssinia. The palace of Faseileda’s bears witness. 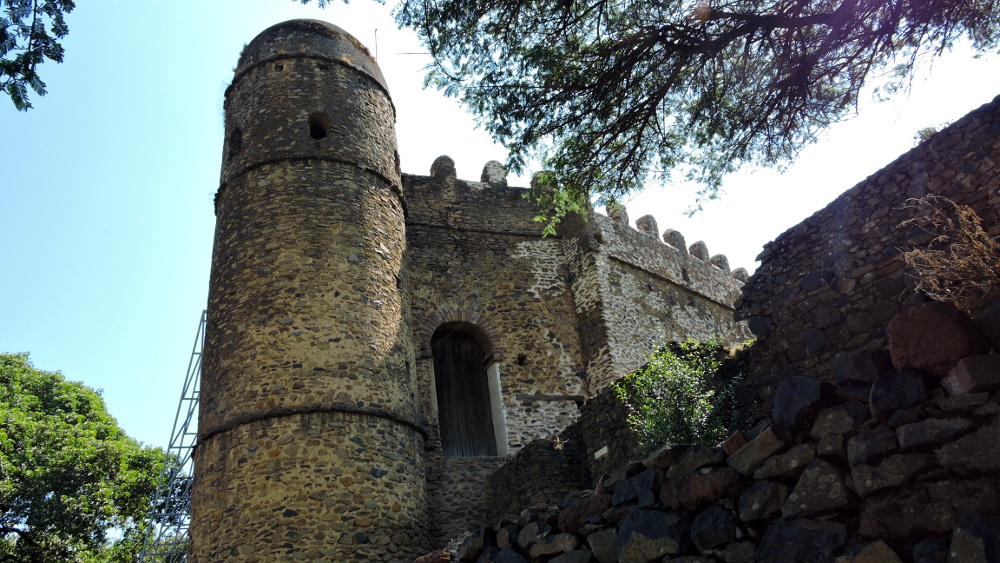 Today, Gondar is a large city with a university. 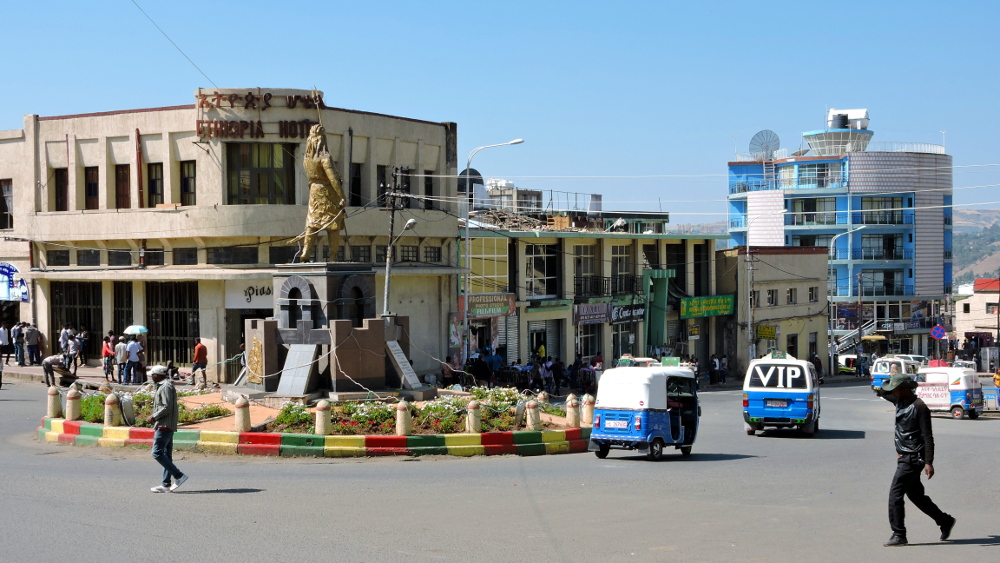 And a lot of tuck tucks. It’s the starting point for the hikers who explore the Simien Mountains.

It was 200 kilometers from Gondar to the border with Sudan.  I had assumed that it’d be only downhill but once again, I was completely wrong. For another 80 kilometers, it was up and down, 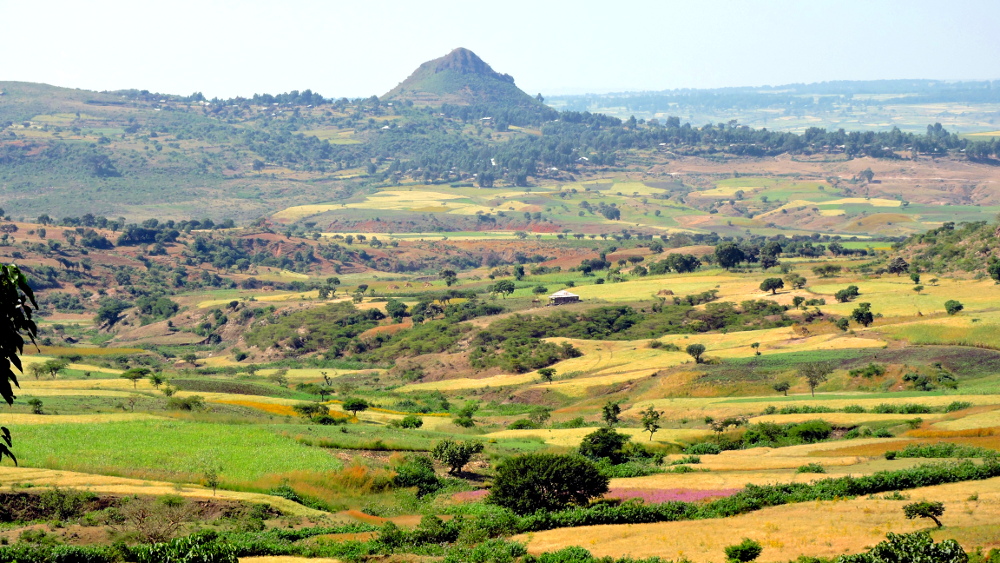 At last I had a fast descent from the Ethiopian highlands. 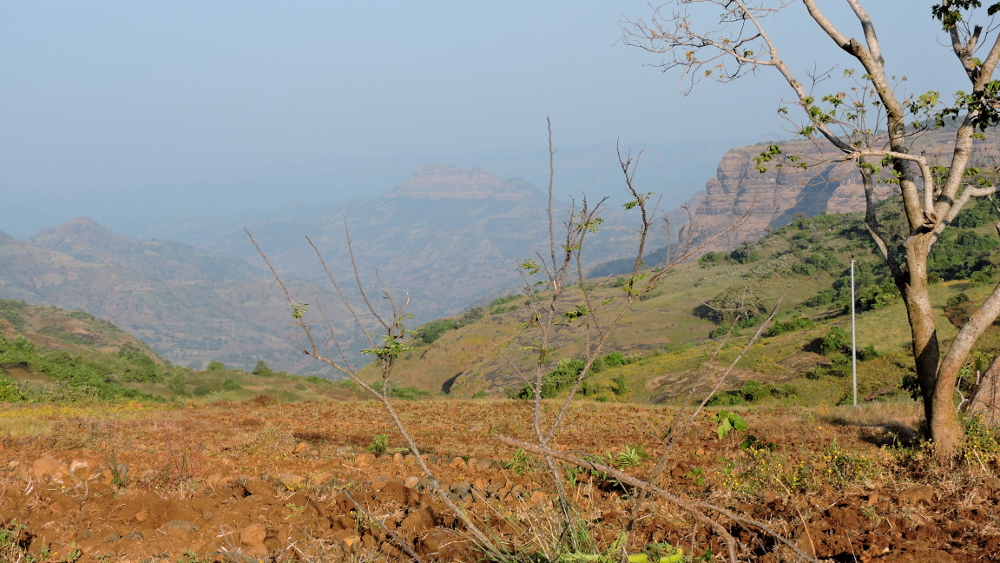 It was absolutely gorgeous. With every meter downhill, the temperature increased. When I reached the border town of Metama, it was very hot. And that was what awaited me in Sudan.

Right at the start of Metema, I was stopped by a man who wanted to exchange money. One couldn’t get money in Sudan because ATMs were only for locals. I had gotten sufficient USD from a friend in Addis Abeba. Now I exchanged my remaining Ethiopian Birr and got double the official exchange rate.

Once again, I was at a border. Would everything be alright? Most cyclists were happy to leave the children behind. Now I would once again enter a desert and a Muslim country which was introducing Sharia law. I would have to forego beer. More in the next blog.