The Eastern Cape in South Africa is less well known than the Garden Route. Yet it had things to offer, also for a cyclist. The largest town was Port Elizabeth which was overshadowed by Cape Town. Justified? Decide for yourself.

Over green hills, past paddocks and the farmstalls which were so typical for South Africa, I arrived in this city of a million inhabitants. Traffic wasn’t too bad. The city was quite spread out and with it its population. And the good thing about coastal cities: there was always a fresh breeze. White beaches fringed the town.

The port in the city was small and old and this is where Beach Street started. There was a wonderful bike path between the beach and the city. 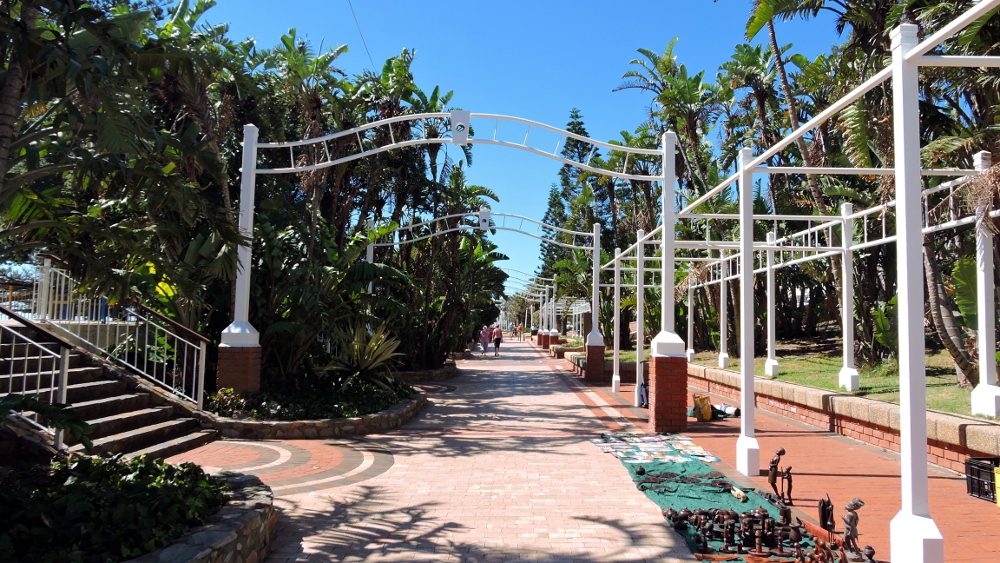 Regarding sports, Port Elizabeth, or PE for short, and Cape Town were on equal footing. This was the home of the African Ironman and the bike path, roads, and beach were quite busy.

If one wasn’t into sports, then the Board Walk offered alternatives. 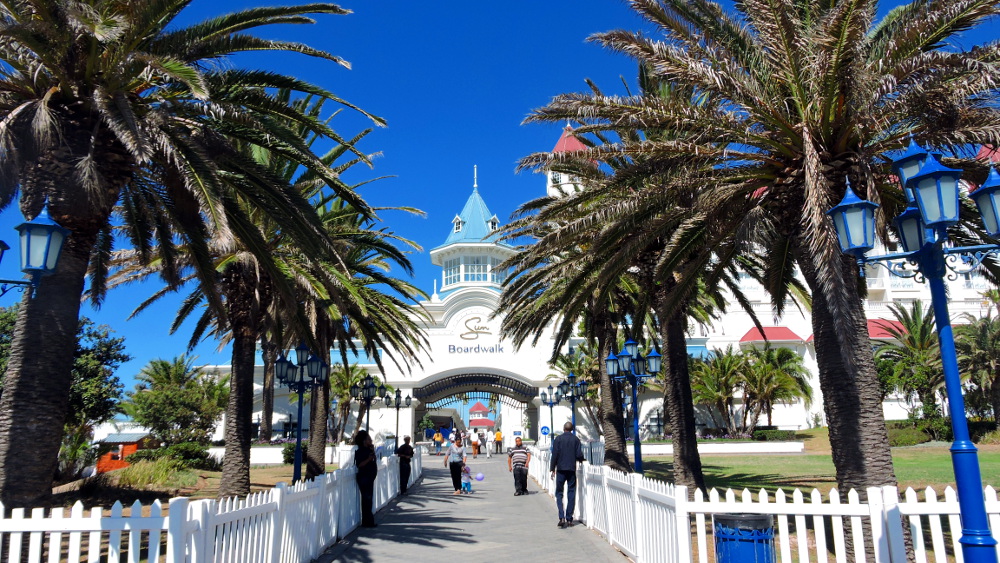 There were exclusive shops where one could find things which were elusive elsewhere in Africa. And of course, souvenirs. 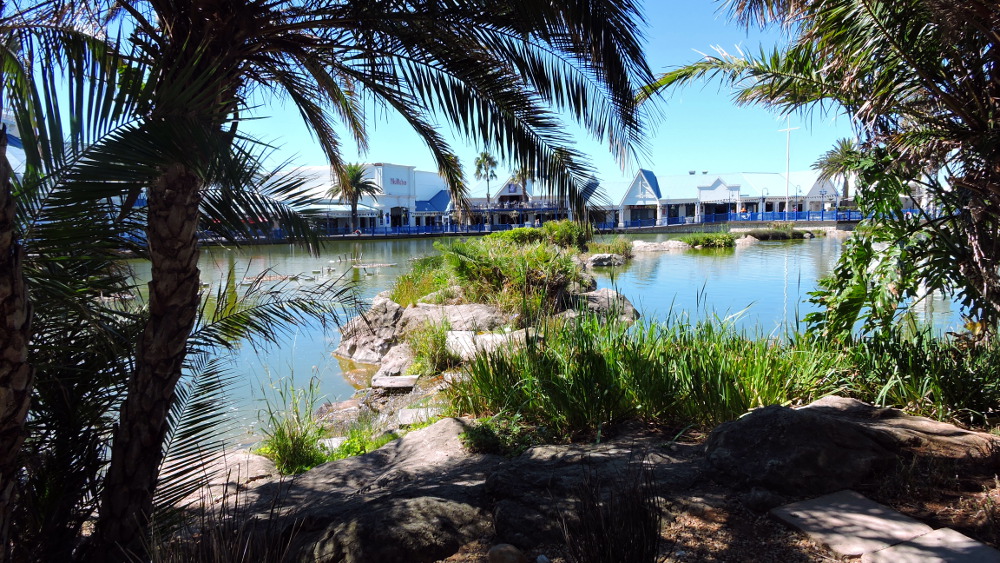 The biggest draw was the casino 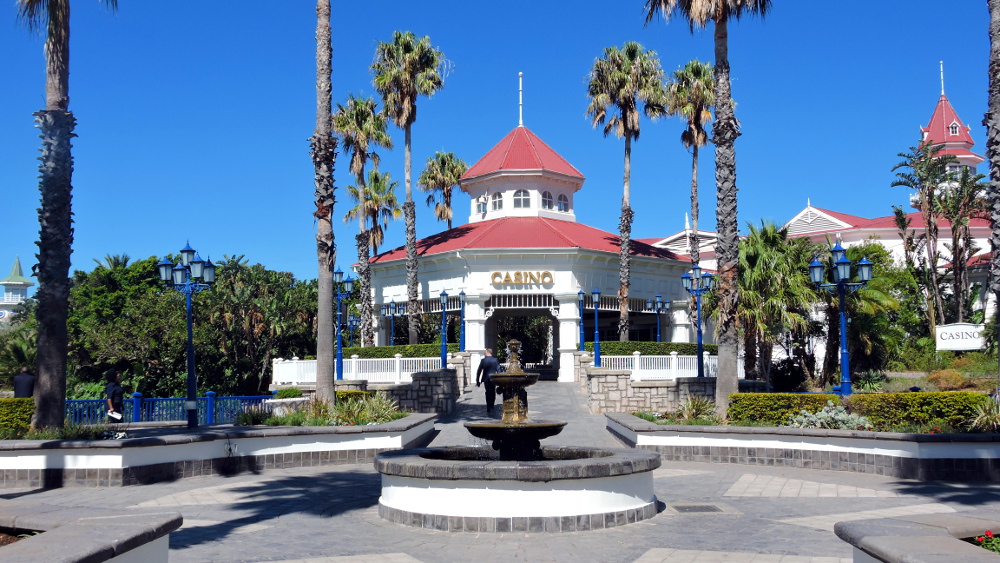 Which I decided to skip. Better ways to spend my money.

For example, for frozen yoghurt at Wakaberry. 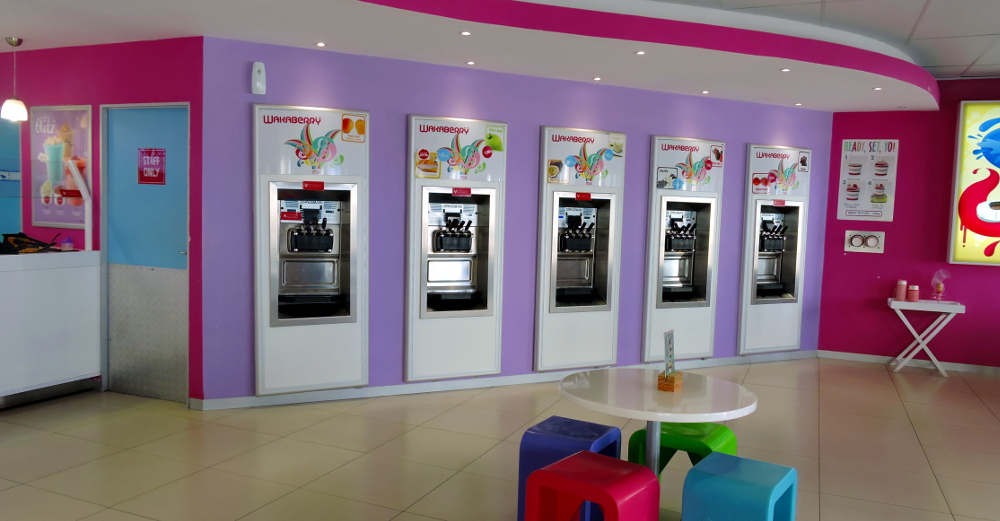 Paradise! It was self-serve soft ice and one could get different flavors. To make it sound healthier, it was called “frozen yoghurt”.

My WarmShower host, Merryl, herself a passionate cyclist, didn’t only serve me healthy smoothies but also showed me the highlights of the city. 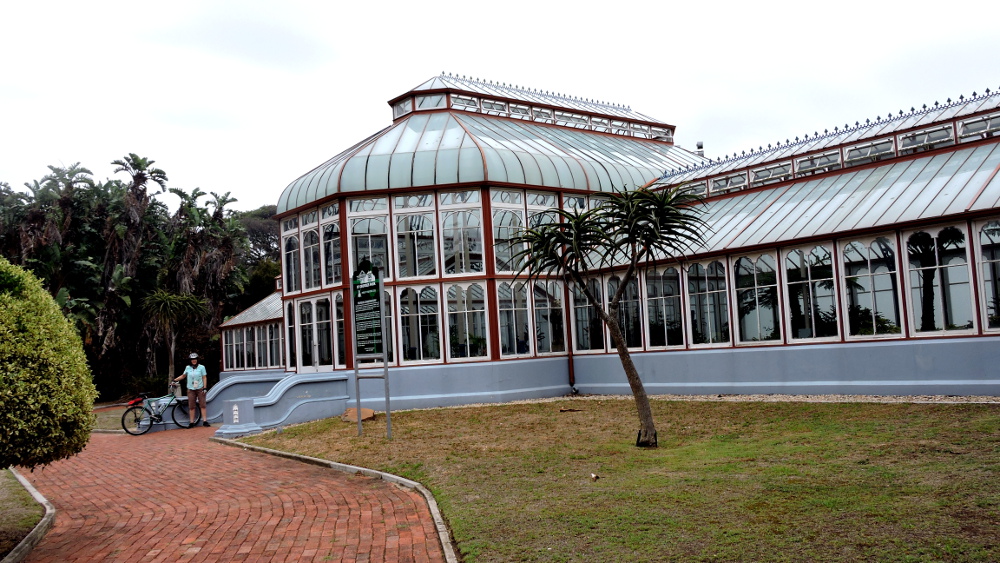 For example, the greenhouse “Pearson Conservatory” in St Georges Park. It might be small but the building itself was fascinating. It was built in 1882 and was home to different exotic plants, including waterlilies and different orchids.

People were proud about the Donkin Reserve which was one of the few tourist attractions. The pyramid was the starting point for a floor mosaic which told the history of the city. 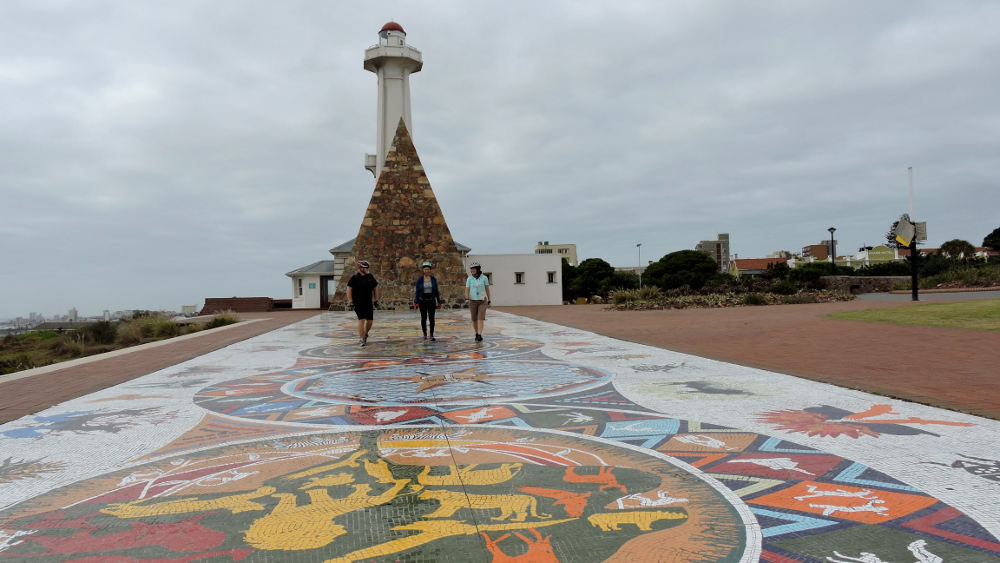 Right next to it was the impressive Nelson Mandela monument.

It portrayed the first free election in 1994. Everyone came and wanted to vote.

Then it was time for me to move on.

Which was beautifully situated along the coast. Unfortunately, it looked as if it wasn’t much used. At the beginning it was a bit sandy and then the surfacing wasn’t great. And the designers didn’t think of cyclists with panniers. 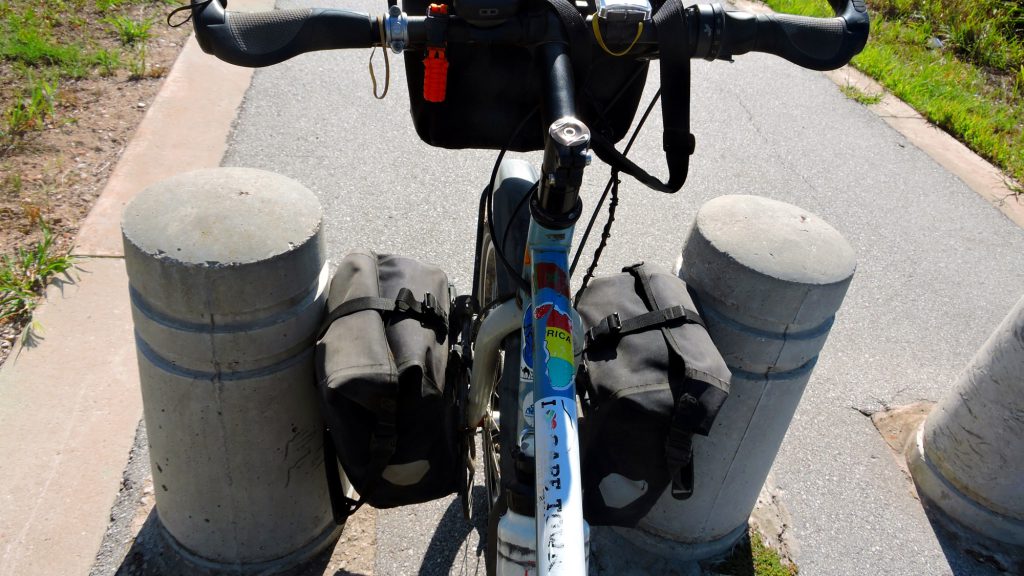 The design was meant to prevent scooters from using the path. It would have been easy to remove the front panniers but the it was a different matter in the back. There were usually several of such barricades and I therefore preferred to cycle on the road.

When I reached the new harbor, the bike path stopped. I had no choice but to continue on the N2 until I could branch off to the quieter R72.

I said goodbye to the ocean at Cannon Rocks, just before Kenton on Sea. 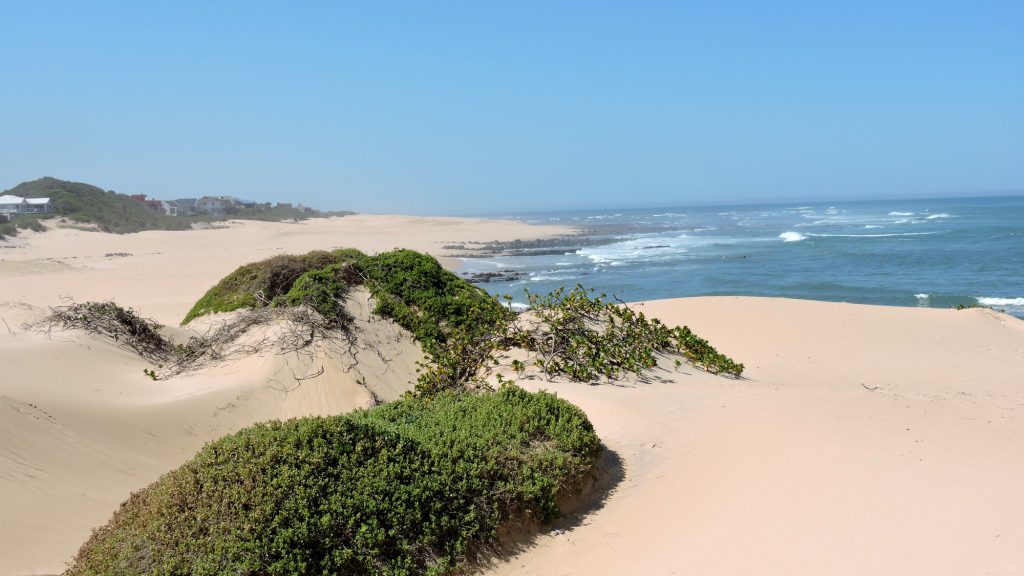 Now I headed north into the mountains. 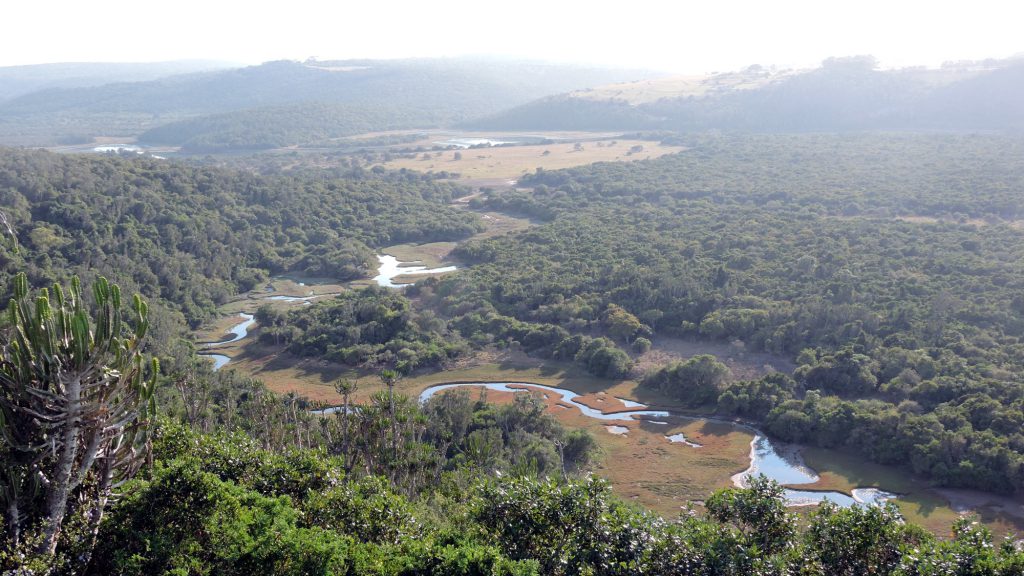 On the way to Grahamstown there was one game reserve after the other. 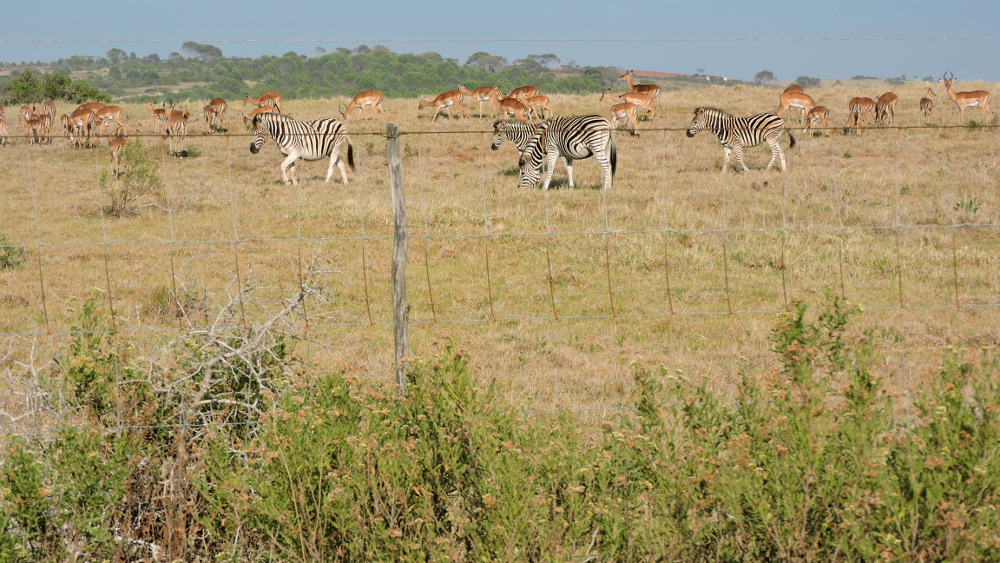 First, I couldn’t make much sense of it but now I understand better. They were amusement parks for adults. In most of the game parks only photo shoots were allowed, and game vehicles took the tourists from one animal to the next. A kind of adventure for scaredy-cats.

There were also game parks were adults could indulge in the thrill to kill and game was raised for shooting. It looked cool to post a selfie with a trophy.

Some game parks used to be grazing grounds for cows. That was a lot more work and more money could be made from game parks. The excuse was that they reintroduced endemic animals, but only behind fences.

After Grahamstown there were only mountains and not much else. 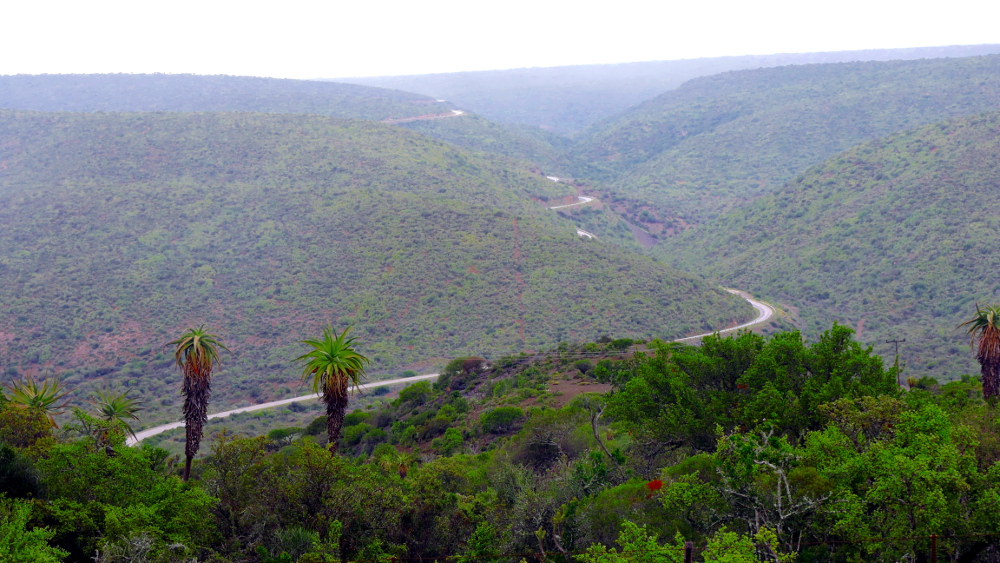 I didn’t realize how high I had climbed. Sometimes it looked as if the road would end in front of a mountain. 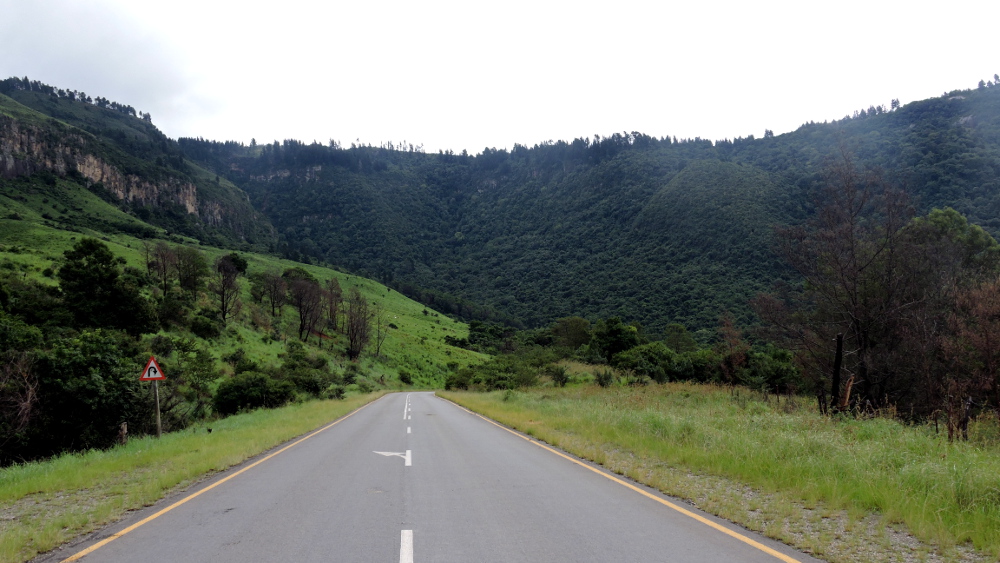 It only curved and then continued to climb.

Finally, I reached Hogsback, the Hobbit town was in an enchanted forest at 1,000 meters and rather cold. 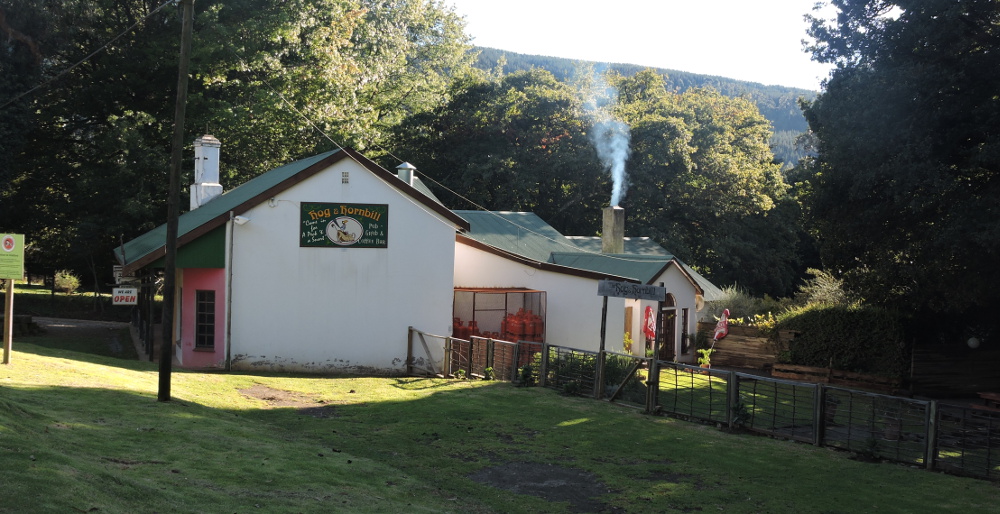 This small town has a lot to offer. It mainly but mistakenly draws Hobbit fans (T.R. Tolkien). There is even a Hobbiton-on-horseback youth camp, but the place had nothing to do with Tolkien. However, it was easy to imagine otherwise.

I continued over gravel roads through paddocks, meadows, and very idyllic brooks 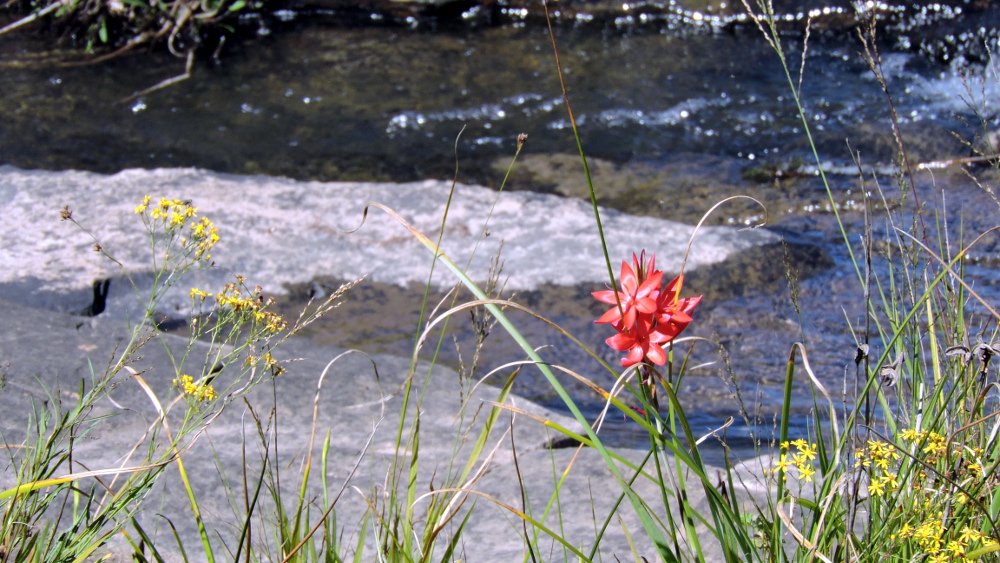 Hogsback wasn’t the end of the climb. That I reached about 20 kilometers later when I had scaled the highest point. 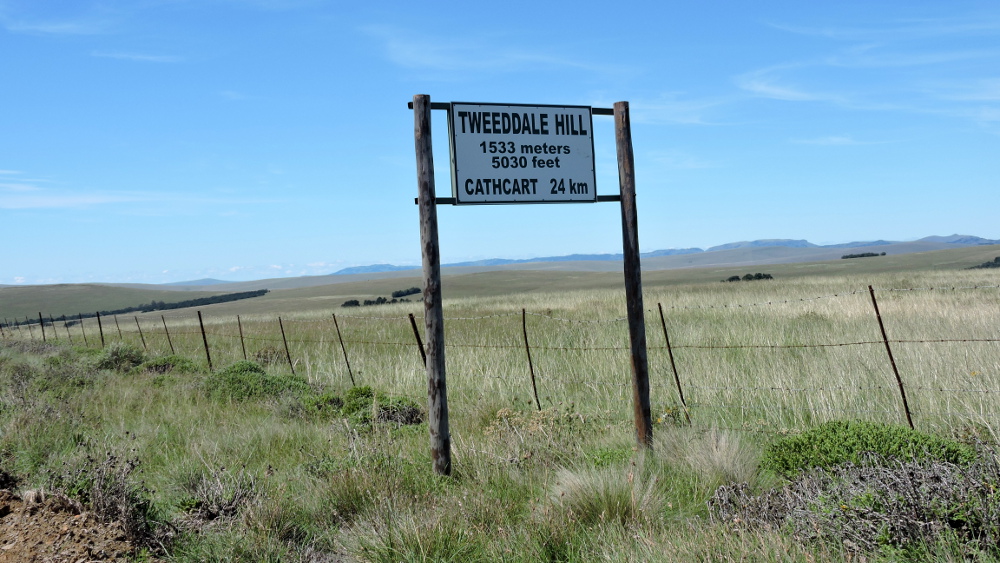 The 24 kilometers to Cathcart were quite far even so I had seen the town from a long distance away. The road went on a long curve around a mountain, down into a river valley, and back up.

I was exhausted when I finally reached Cathcart. It was a Sunday. At first the town didn’t look inviting but at the end I discovered a colorful double-decker bus. 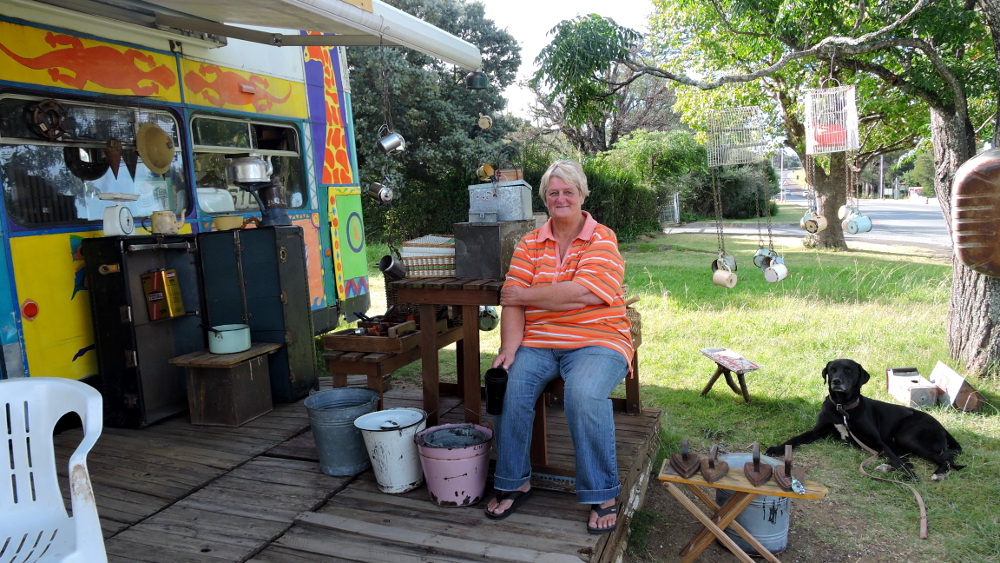 The proud owners were sitting in front: Rita and Nick. 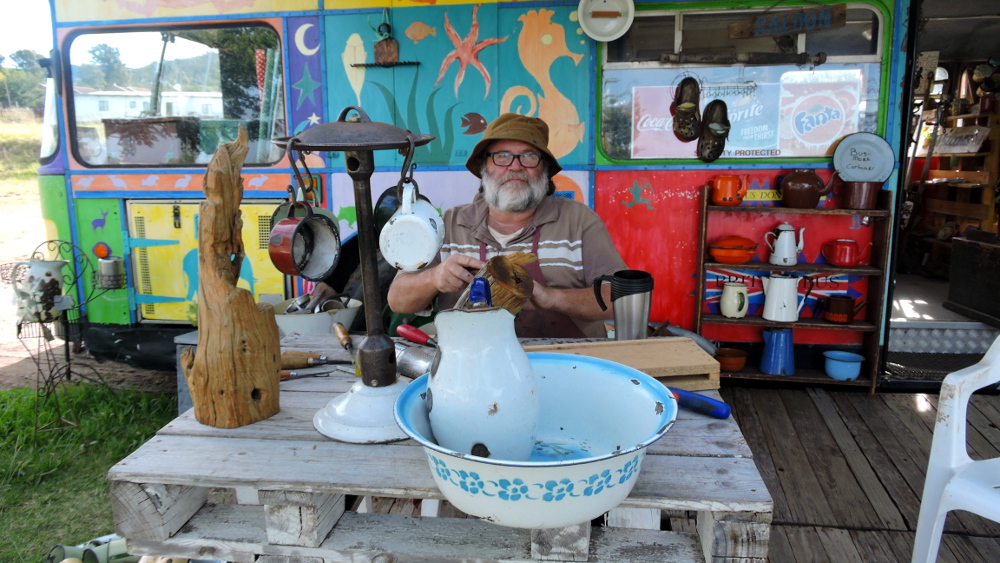 They pulled up a chair, I got something to drink and a slice of Rita’s home-made cake. I immediately felt better. Especially when I discovered my new bike: 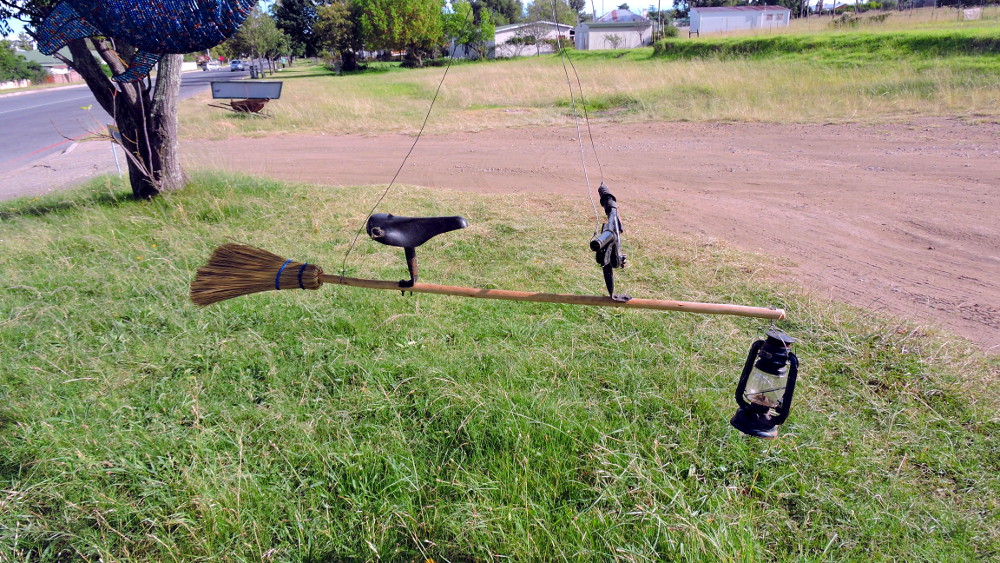 There were more treasures that Nick had assembled from discarded items.

And they themselves were real treasures. They had a small house behind the bus. Every morning they drove the bus 150 meters to the road and put everything outside. In the evening it was a return trip. The old double-decker bus was Nick’s pride and joy and it was hard to believe that it could still drive.

I pitched my tent in their garden and they invited me to dinner.

The next night I stayed at a campground in Queenstown where many black migrant workers also camped. When I registered, I was shown the facilities. I had access to a separate toilet and shower. “Only for whites”, oops, I thought those times were long since over. For months blacks and coloreds had shared everything with me. Here they weren’t even allowed to use the same bathroom.

The Transkei was waiting for me which was a former homeland, mainly for people from the Xhosa tribe. During the apartheid era it was autonomous from 1976 until 1994. Nowadays mainly black and colored people lived there. Reason enough to warn me about it. 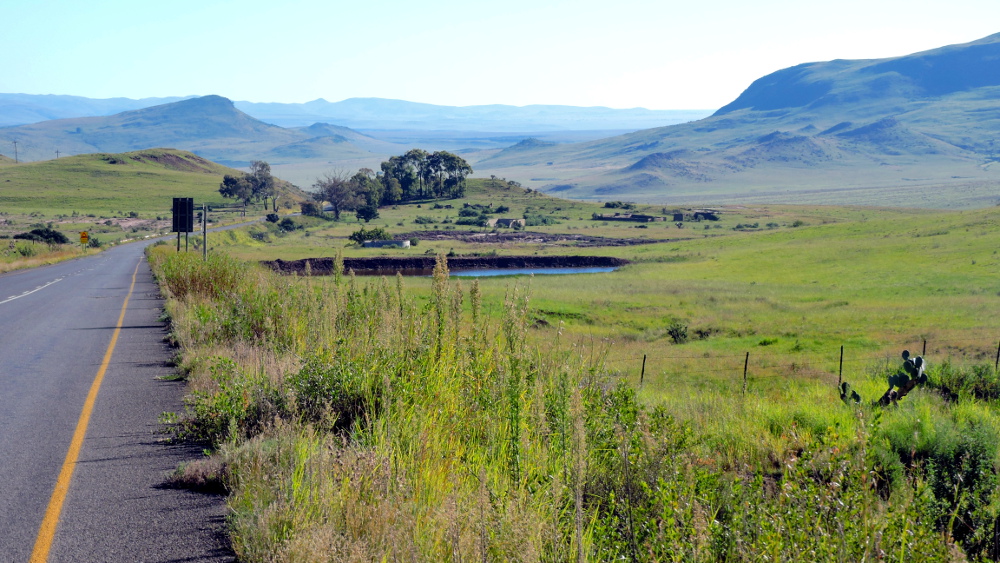 I was advised to leave early in the morning so that I’d definitely reach Dordrecht, the next “white” town.

It was an incredible day. Neither too hot, nor too cold and little traffic. The green hills reminded me very much of Mongolia. 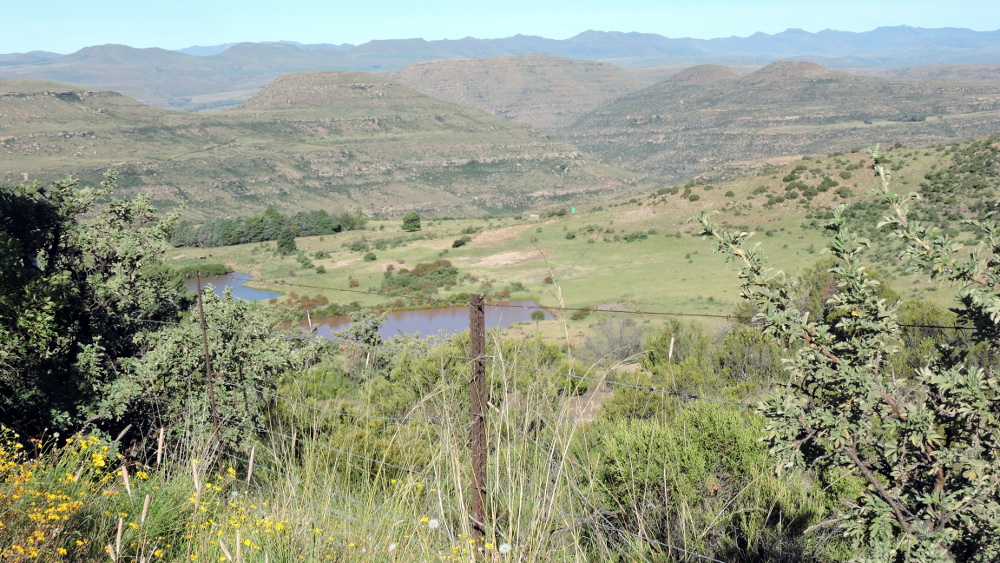 Occasionally I passed a township and at the half way point there was even a “general dealer”. Everything was behind fences and bars. Whites probably never stopped here to shop. I thought this was the “real” Africa.

As always, I was quickly surrounded by youngsters. As always, my bike with its panniers was a magic draw and quickly a funny conversation started. I didn’t feel threatened at all.

Without problems I reached Dordrecht and could safely camp next to the police station.

After the town the paved roads and green hills stopped. On gravel roads I cycled past rugged rocks and gorges. There was a steep ascent to 2,000 meters. It was virtually impossible to bike. 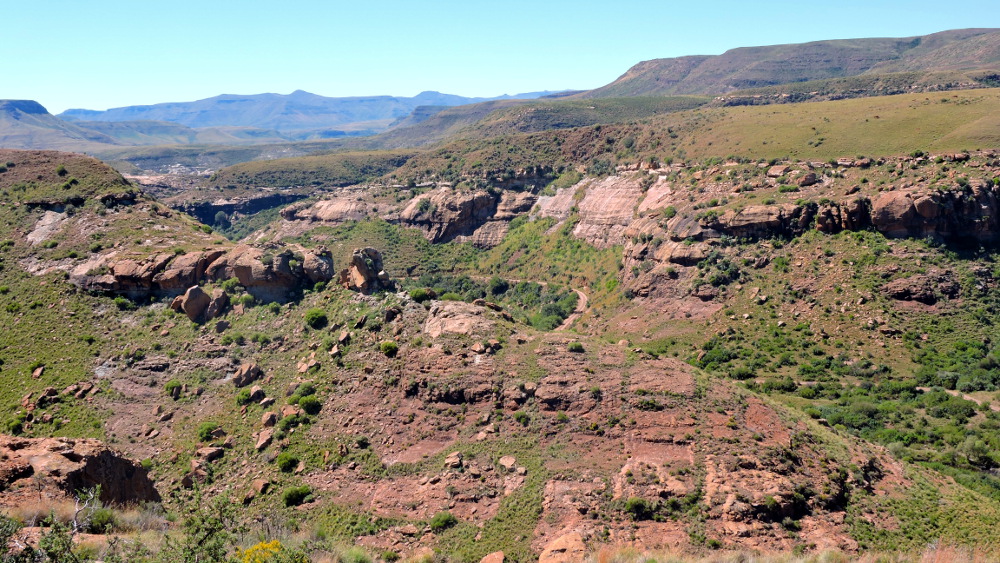 A farm appeared just in time during late afternoon. I could pitch my tent with a view of the mountains and was invited to dinner. I was in good spirits.

There were a few more kilometers of gravel until I finally reached a paved road and could zoom down the mountain. 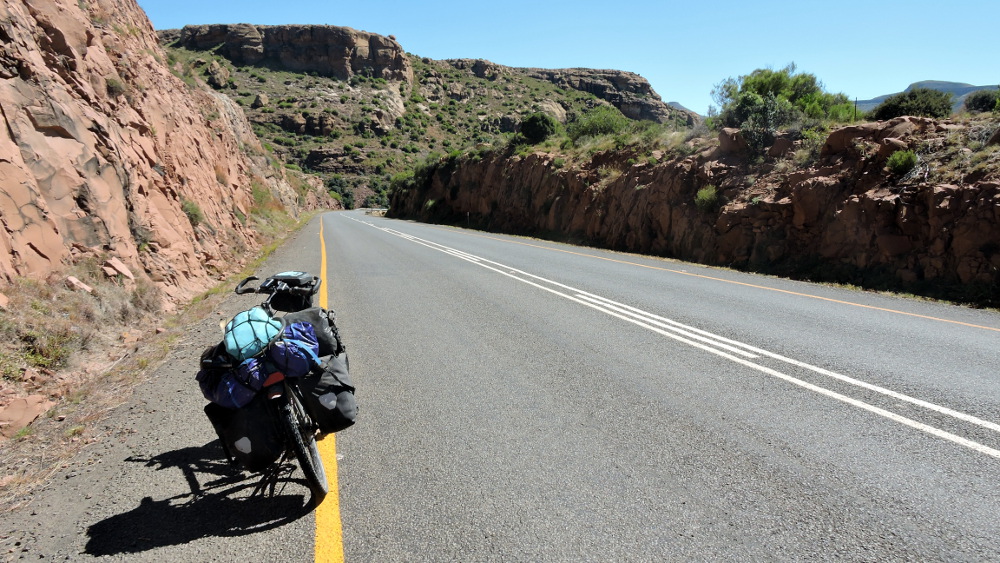 I was about to leave South Africa and the last couple of nights I spent with Grant in Lady Grey. (Some evil tongues, or honest ones, thought that was fitting). 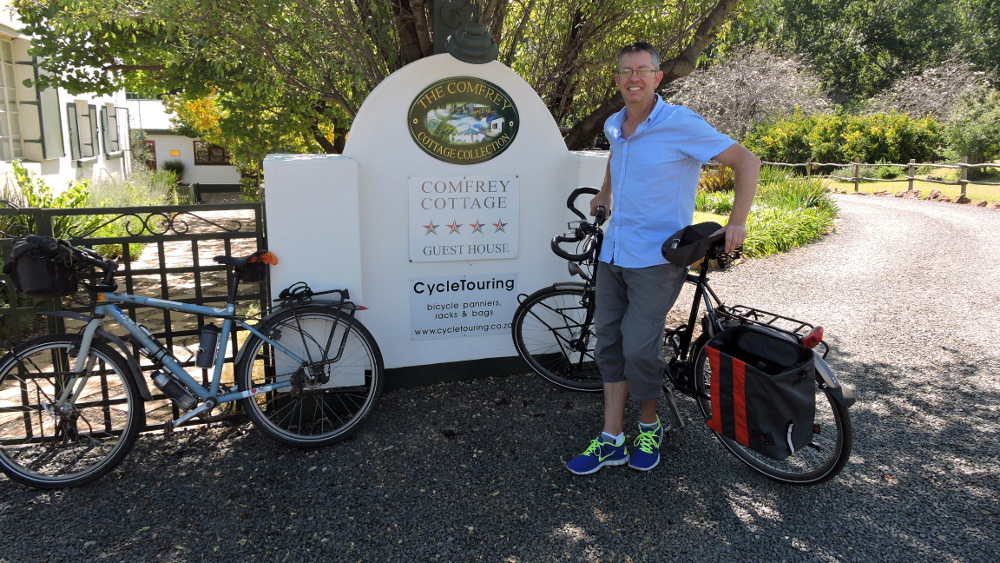 Grant is a WarmShower host but also the only distributor of Ortlieb bags and other goodies for long-distance cyclists. Not a single bike shop in South Africa sells them.

His living room made a cyclist’s heart beat faster. There were Ortlieb panniers, Schwalbe tires, etc.

The town is a dead-end road amongst the rocks. 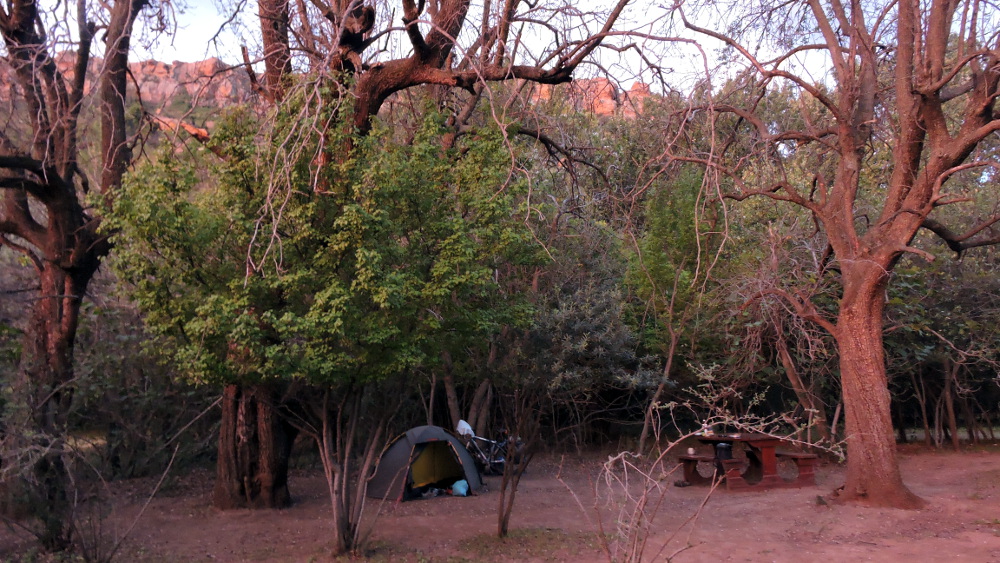 It was only 70 kilometers from Lady Grey to Lesotho. Those I mastered without difficulties the next day.

Keep on reading to find how I fared in the little kingdom which is nestled within South Africa. A preview: even so the countries are so close, there are worlds between.