Between Boko Haram and the attacks in the Niger Delta

Nigeria had been the country I had been most warned about. The news only reported negative stories. It was difficult to get a visa. But other travelers had told me that you could come out alive. I didn’t want to fly and so I tackled Nigeria.

Immediately at the border I encountered unpleasantness. An overweight official decided to reduce my three-months visa to seven days. After some effort I could convince him that it was impossible to travel through his beautiful country in only seven days. He gave me 28 days. And I was supposed to be grateful. In Nigeria I had to be more differential to hierarchy and at least in the beginning I tried to be.

During the first twenty kilometers, I encountered about ten checkpoints, regular police, border control, contraband control…Everyone in a different department and needed about 30 minutes to record my details. As if it wasn’t possible to simplify things.

At the checkpoints they went through my bags. And the official seemed to play a game with me because he wanted to confiscate my Opinel pocket knife. It could be used as a weapon. In a country where almost everyone carried a machete, I would have been killed before I could have pulled out my mini knife. I got the Opinel back.

Between the checkpoints it was up and down all the time. 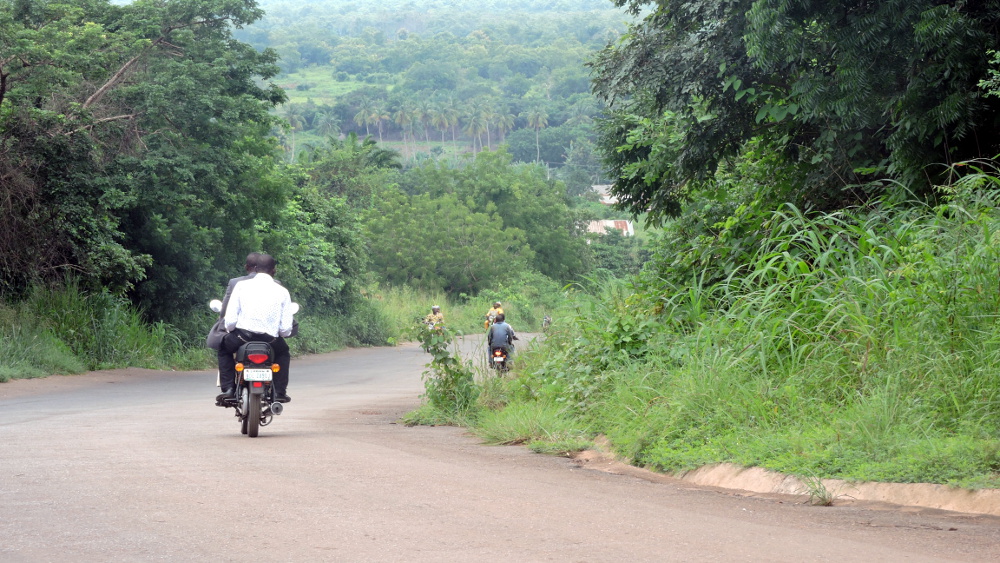 Once it was so steep, I couldn’t make it uphill. I wasn’t amused when a man stopped and took photos of me. It turned out, he was from the border police which I hadn’t recognized because he didn’t wear uniform. He took photos to ensure that I’d be stopped at every checkpoint. That was going to be fun!

Later on, there was only one checkpoint per day. In between I enjoyed the ride on quite good roads.

Nigeria is a very rich country but unfortunately very little of the wealth from natural resources reached the population. Even gas stations hardly made it. 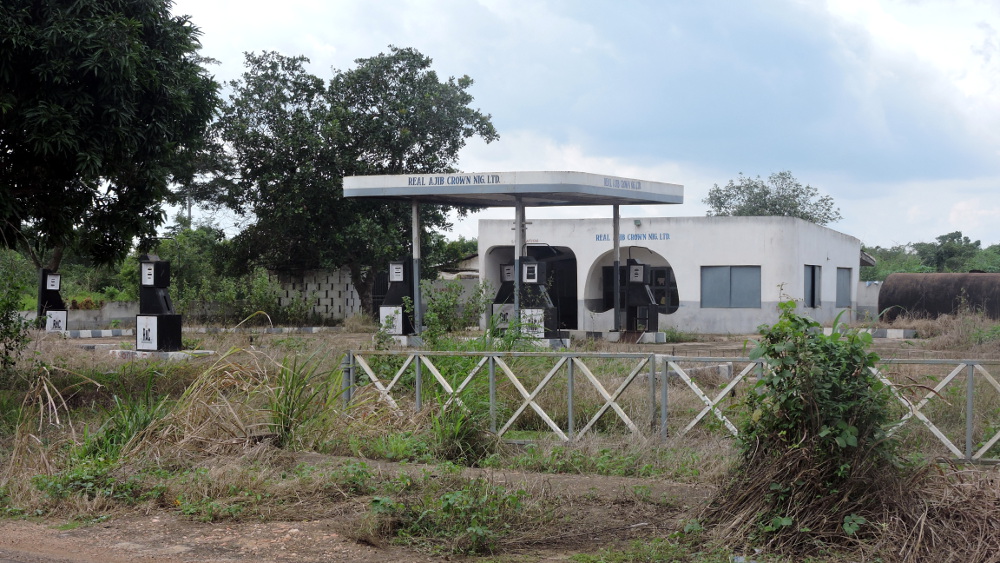 It was frightening to see and the country was in a miserable condition.

Before Abeokuta the road got very bad with giant potholes filled with water. The traffic backed up for about one kilometer. I really didn’t feel like camping. Thanks to the police I found a hotel which was relatively expensive. A few Nigerians stayed there nevertheless.

When I left the city the next morning, Sunday, there was a traffic jam that reached for several kilometers. All wanted to go to one of the big churches. It was my first encounter with the bigotry of the Nigerians.

Along the road, the misery piled up. 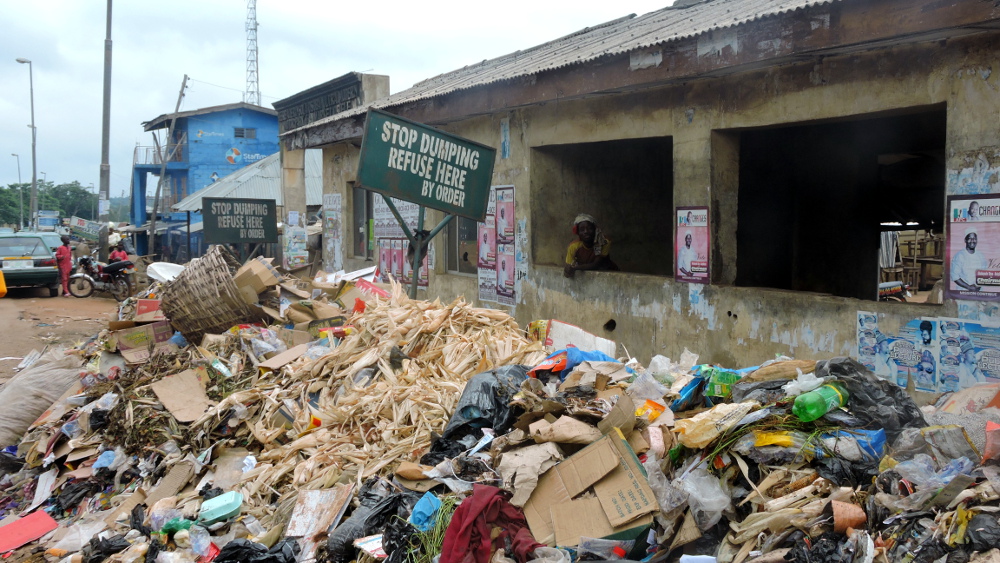 The yoghurt ice cream which was being sold everywhere for a few cents, kept me going. 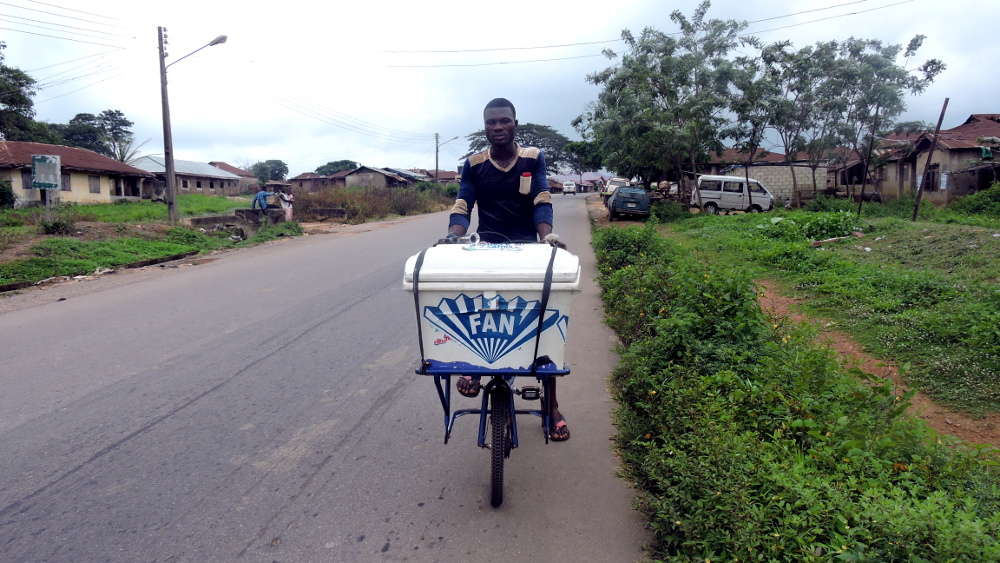 Hard to imagine how someone made his living this way.

The gas stations that had gone out of business where a good place to rest. 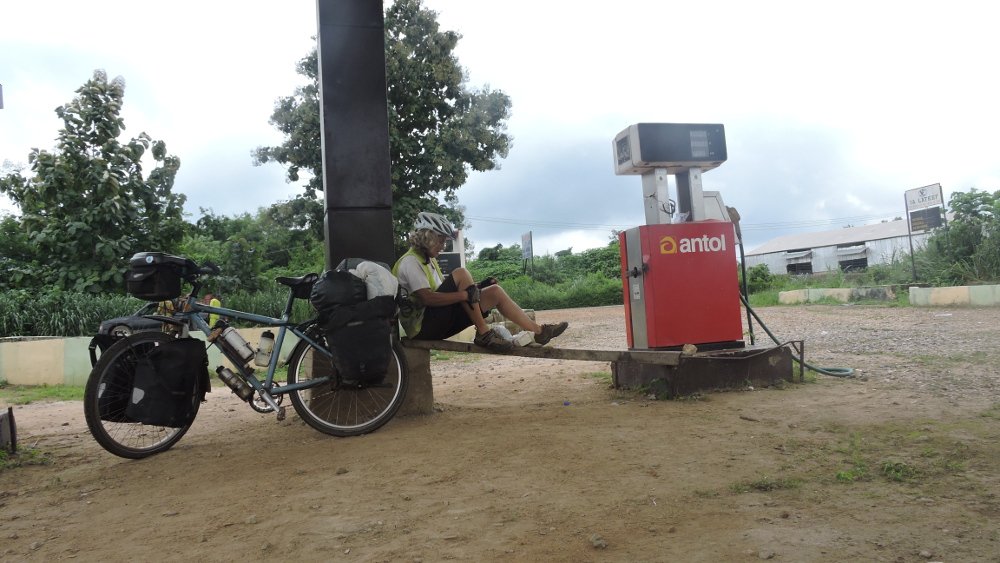 Especially when there was a police checkpoint in front. Some policemen were very nice.

I had just finished my picnic when a Mercedes sports car flew in. The back spoiler dragged on the ground. Another car with plain-cloth policemen was in pursuit. Two men jumped out of each car and started to shout at each other. A real fight followed. It didn’t feel right, I packed up, and continued.

My GPS took me right through the center of Ibadan. Even so it was Sunday afternoon, the streets were pretty crowded. Markets were everywhere, and I was very glad when I had made my way through.

From a hill, I had a good overview of the sprawling city. 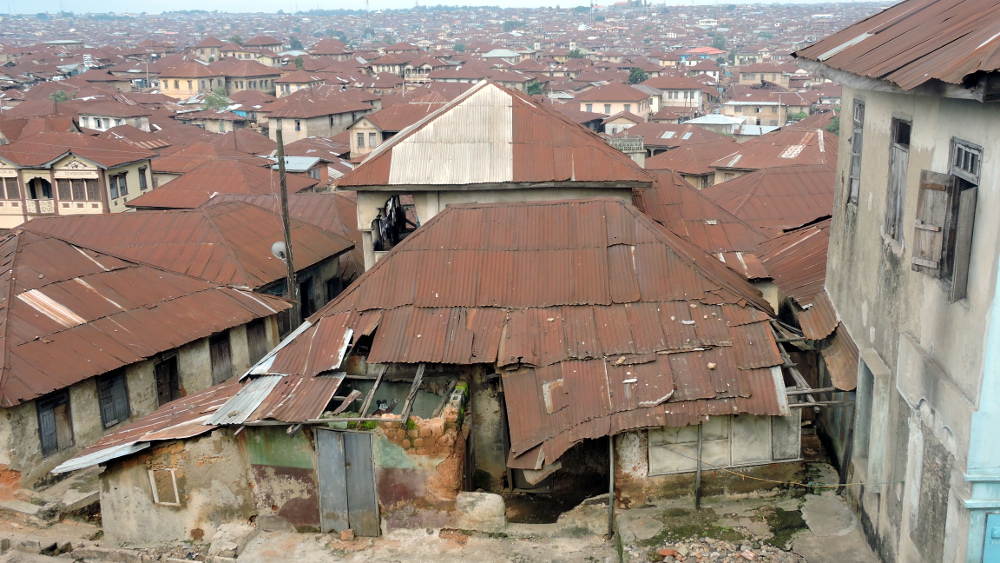 A young man advised that I better continue because this wasn’t a safe area. I gladly followed his advice.

There was an advantage when there were police checkpoints. The policemen always knew of a good place to spend the night. That way I found a safe place outside of Ibadan.

When there weren’t buildings and garbage, Nigeria was a very beautiful country. 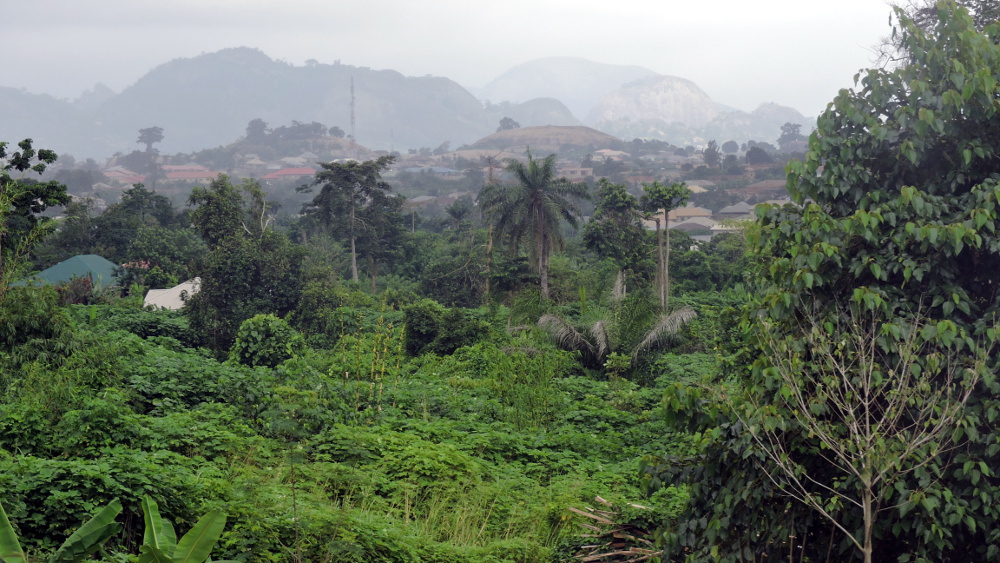 A lot of green, mountains, rocks, and sometimes even waterfalls.

But then followed abandoned construction sites. 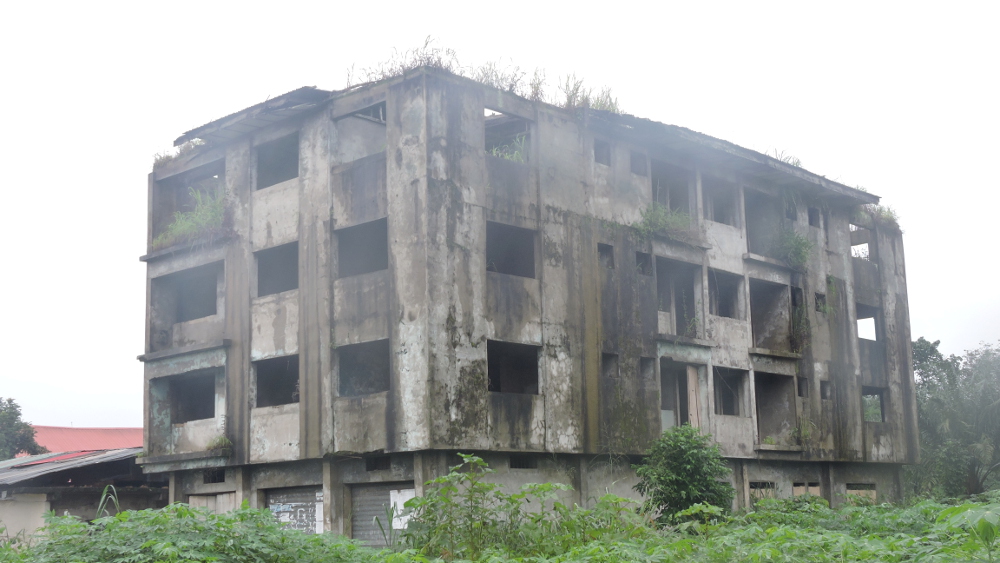 A lot of buildings which were never finished.

Traffic and the many trucks were terrible. Many broke down because they were overloaded. 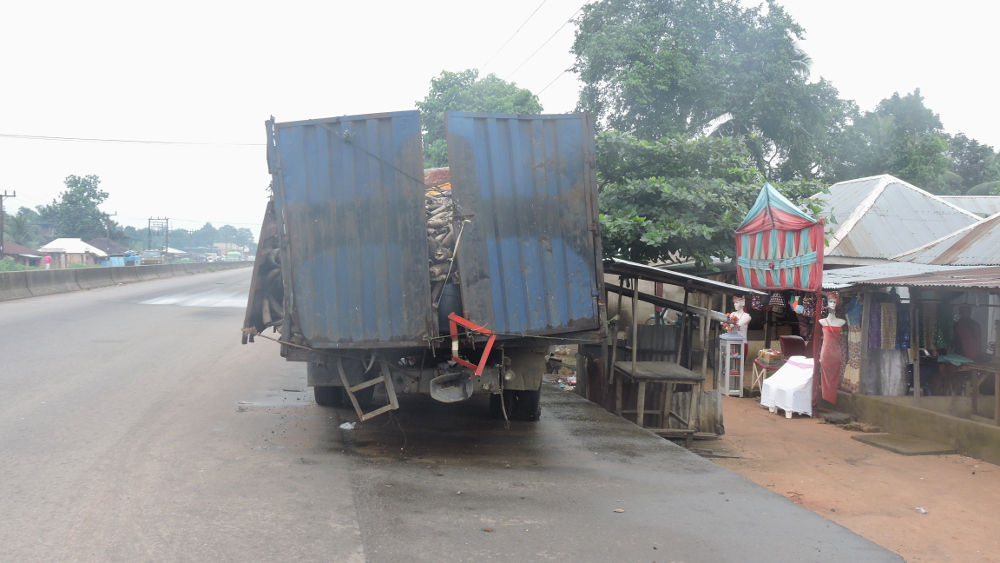 The vehicle didn’t look any better from the front. 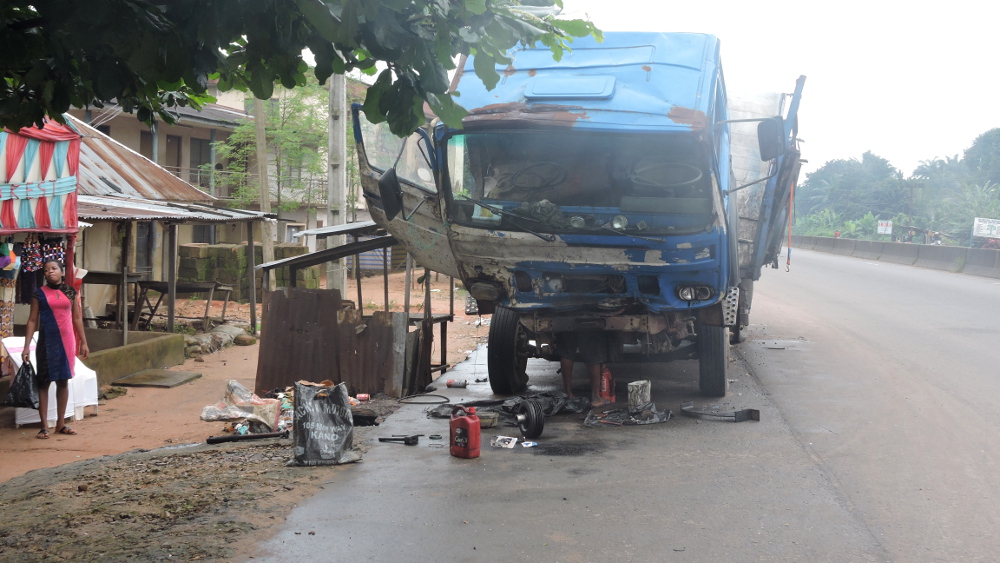 At least they weren’t dangerous that way. Usually they overtook with very little margin. At the police checkpoints they explained they were there for my safety. I suggested, a lot could be done for my safety, if they checked the trucks and the speed. I doubt there is a law that requires a driver’s license. 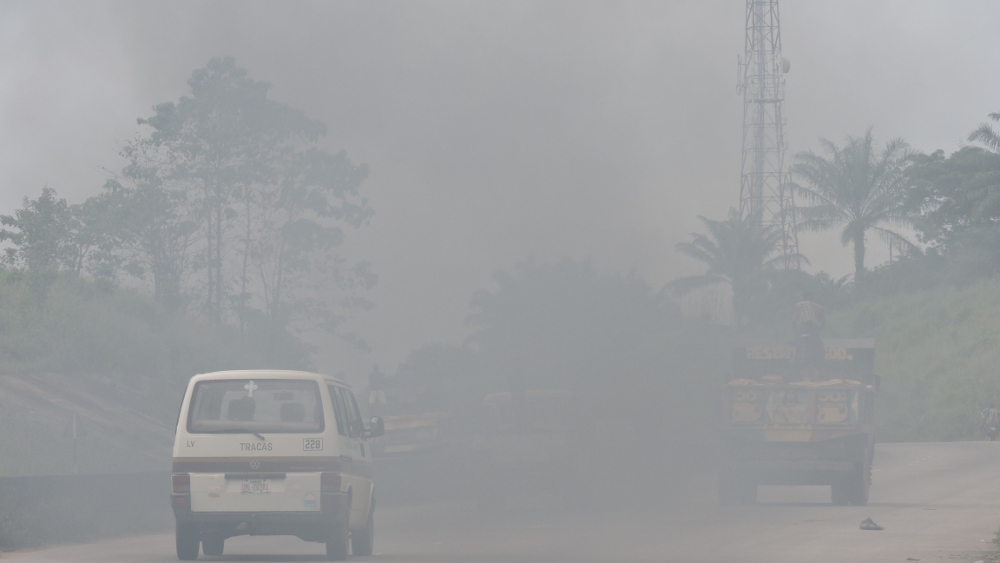 It wasn’t always healthy to travel by bike.

Almost worse than the trucks where the small moped tricycles. 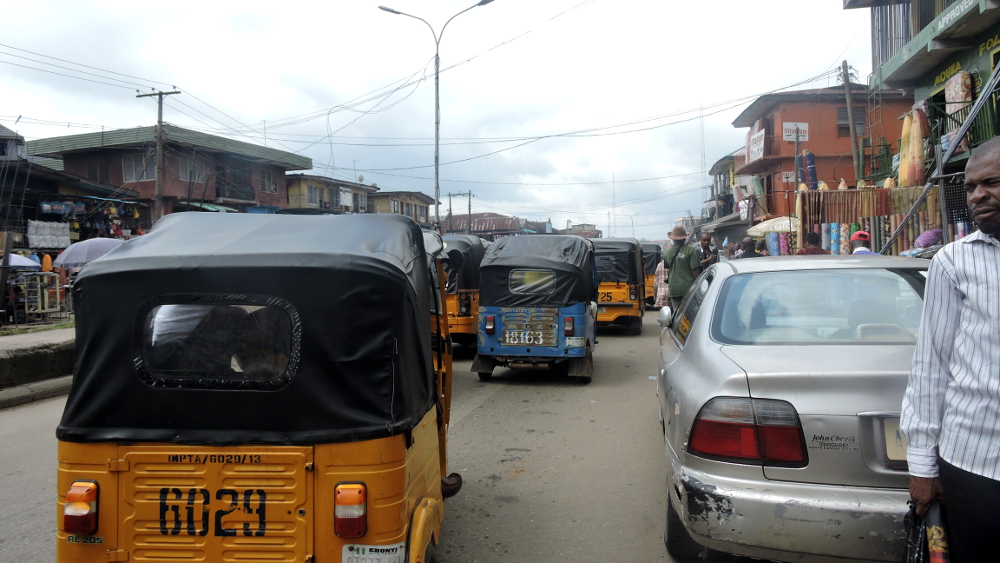 The moped drivers didn’t realize that the backside of the tricycles was wider and many almost hit me.

It got even better in town. 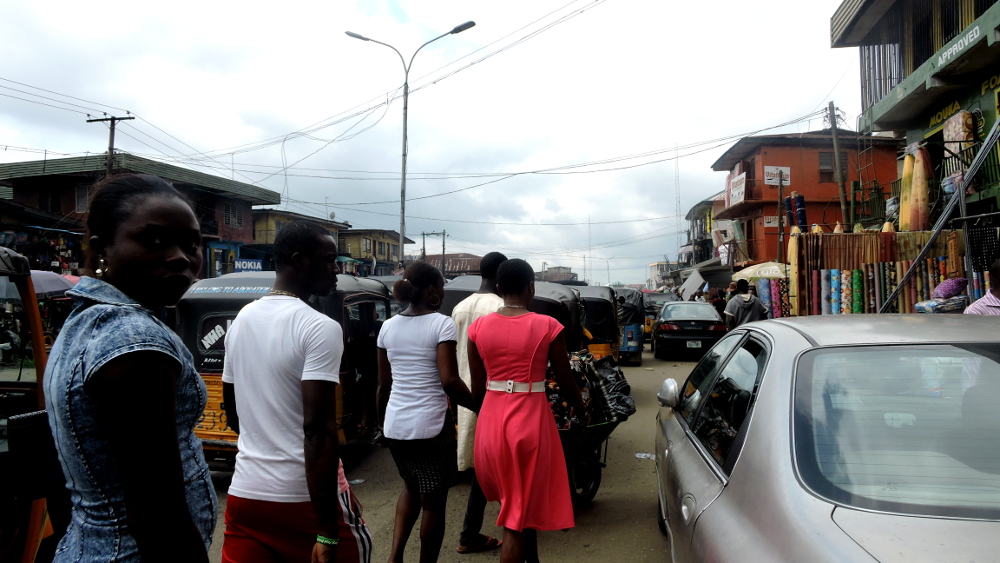 where there were also pedestrians making their way through the traffic jam. No way, that I could pass.

I wanted to cross Nigeria as quickly as possible, chose the direct route and tried to avoid unpaved roads. That was impossible in the south. 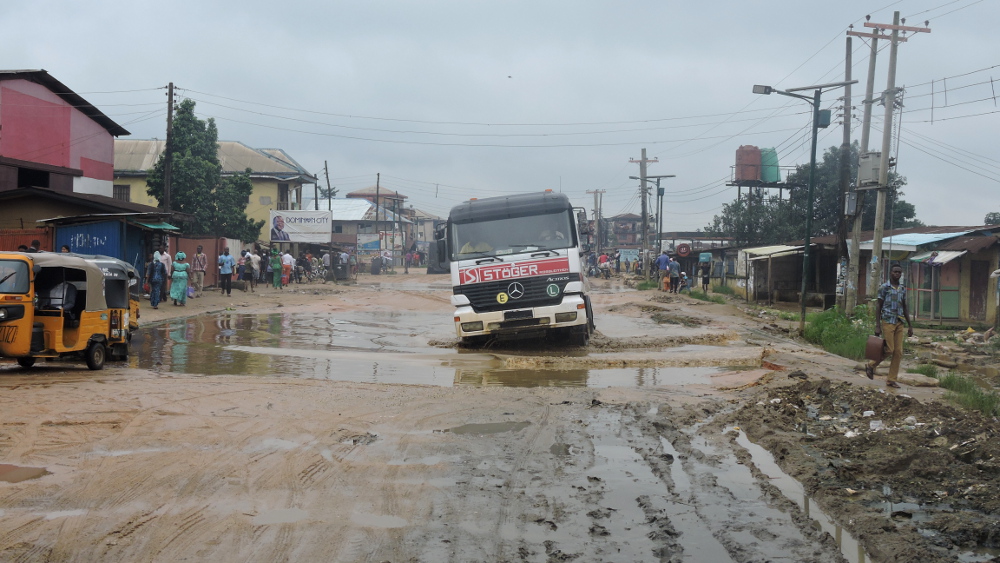 Even in the middle of Aba, the road was made of mud, sand, and water. Trucks got stuck in it.

I wanted to continue to Ikot Ekpene but people told me that I wouldn’t be able to get through. 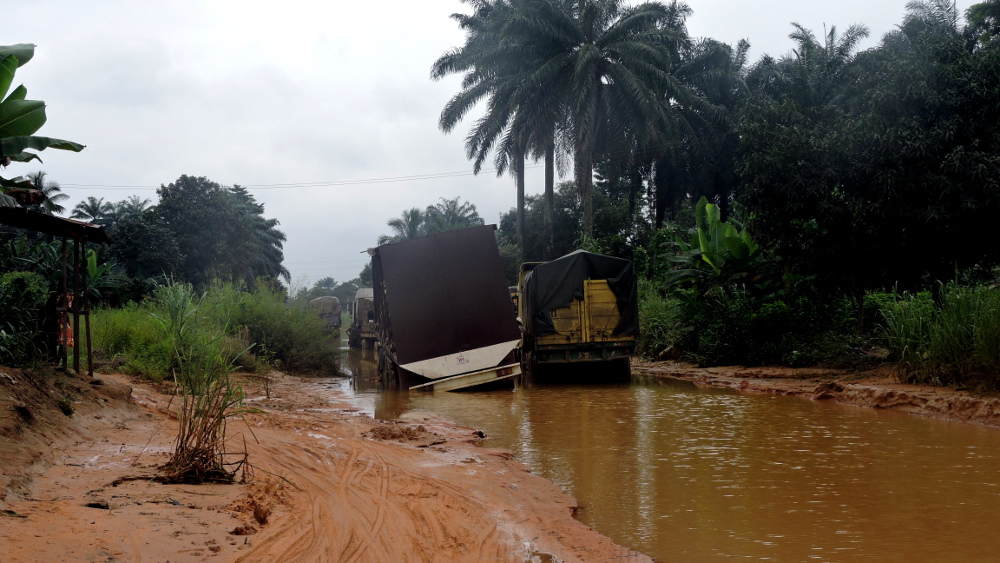 And that is a main road? Yes…. 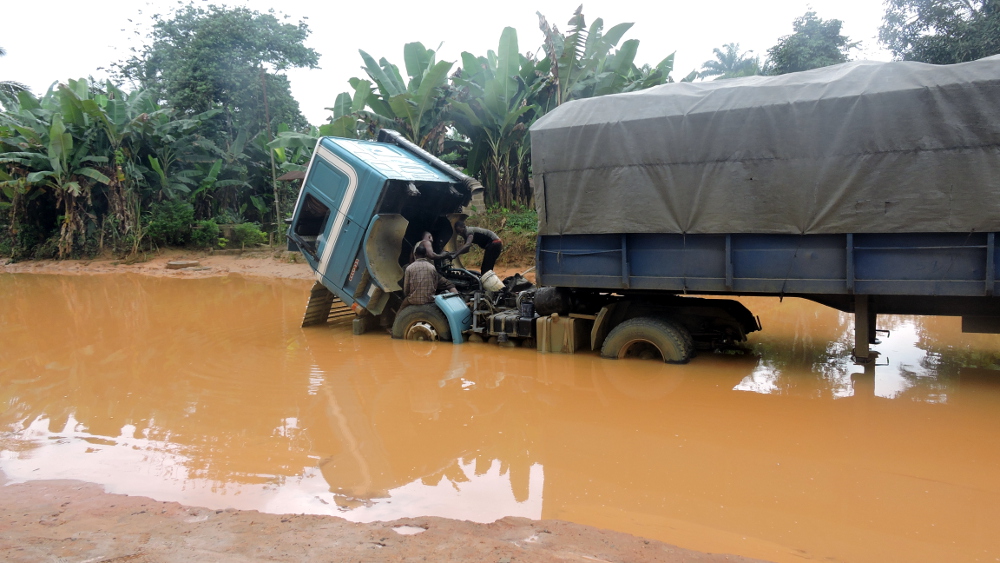 I got a bit upset when someone said, it was God’s will, and countered “no, that’s your government”. Not a surprise, that they no longer issued visas to tourists.

There was an incredible number of different churches in Nigeria. Along the roads there was a large number of signs pointing to the different places of worship. Probably everyone who wanted to could open a church. And was supported by the government.

Service wasn’t limited to one hour on Sundays. At least three or four times a week people went to church for two to three hours. It sounded like brain washing to me. Even passing by on the bike, I heard the cries “it’s the will of God, it’s the will of God” which were repeated hundreds of times. Followed by “He will show you the way, he will show you the way”. One had to pay contributions to the church and people were generous. Hardly surprising that it was so peaceful in the country and no one resisted.

Even if they did, they wouldn’t get far because of the police presence. 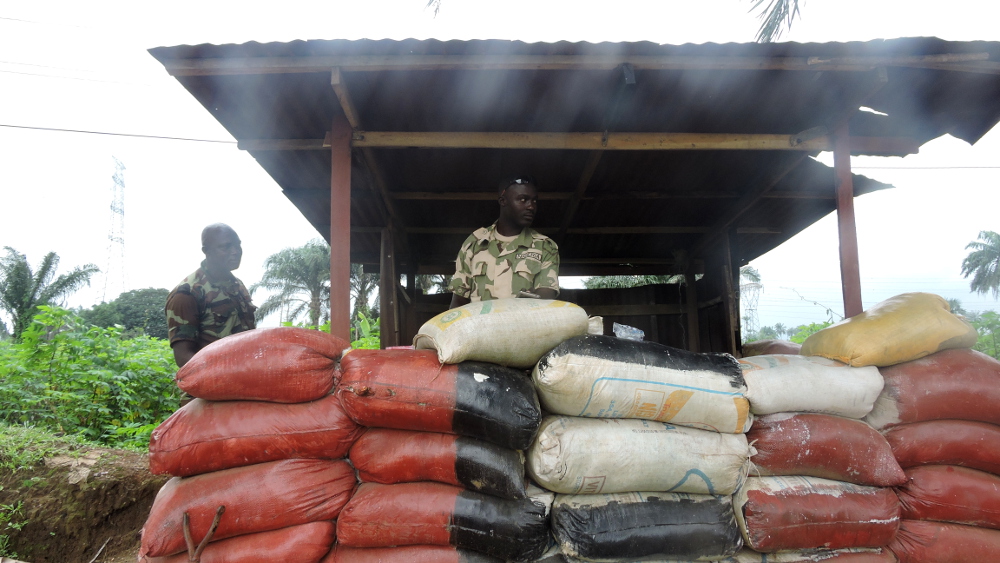 Because the population is very poor, they ate whatever they could catch. 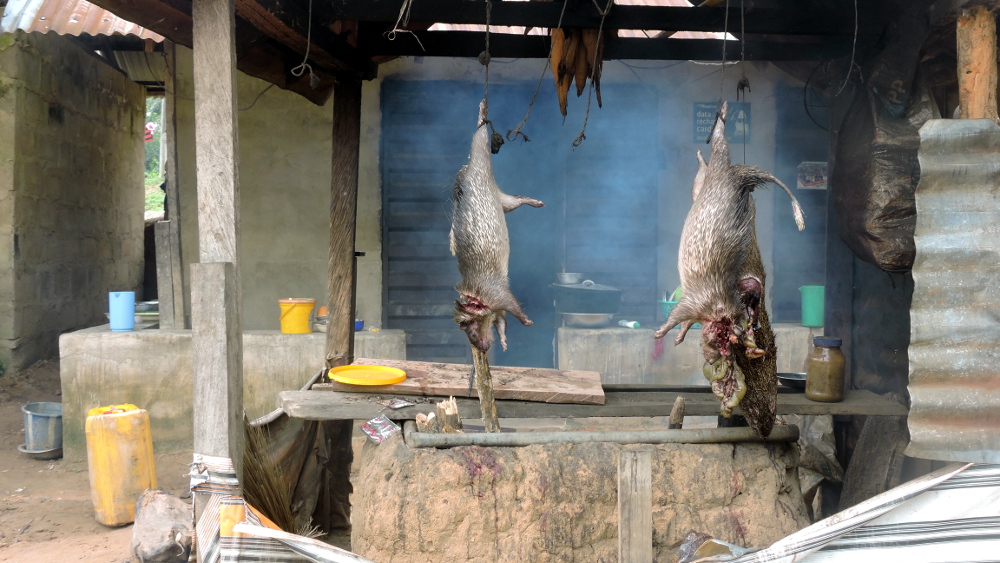 Along the road, they sold “bush meat”, dead animals which had been caught in the bush.

On trips, I prefer to be vegetarian.

In the direction of Cross River, the road improved a bit. 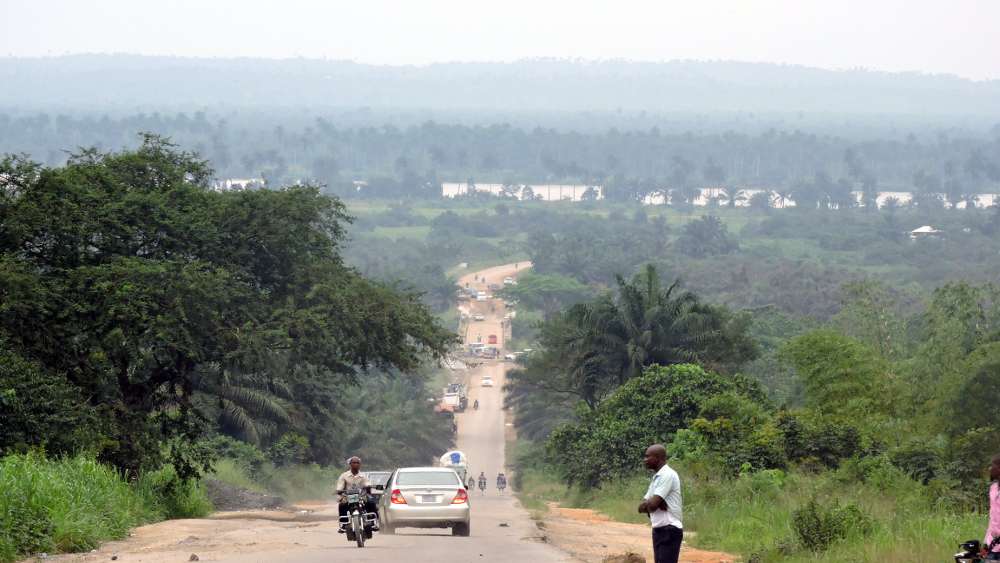 There were still a lot of potholes and I was surprised that there were more accidents because of all the swerving. 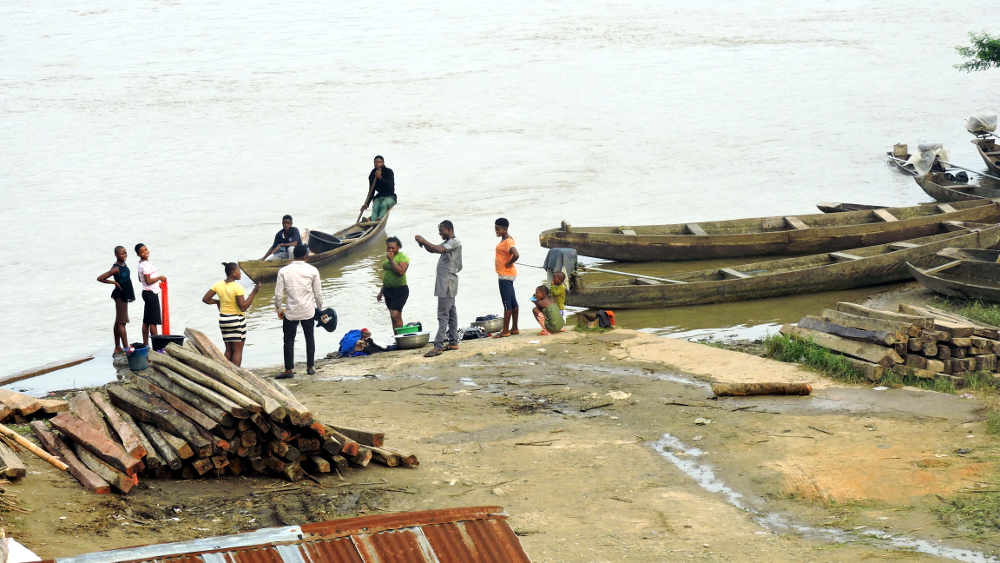 Shortly before the bridge, I found a small place to spend the nigh 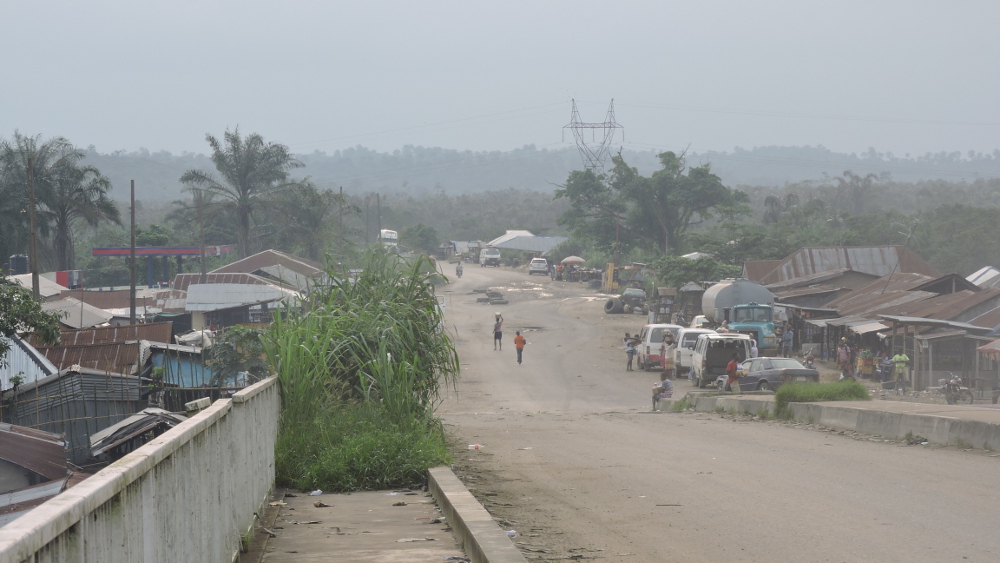 But I didn’t feel like a shower or using the water for cooking. I assumed it came straight from the river. 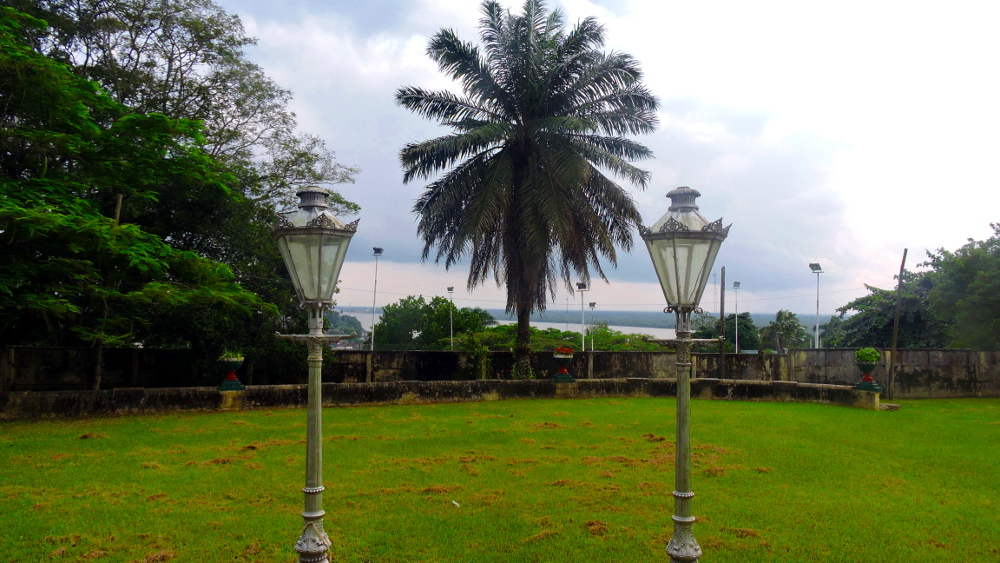 It was apparently the greenest and cleanest city in Nigeria which was true for the area around the national museum. The rest of the city was as chaotic as the country.

I went immediately to the embassy of Cameroon and got my visa right away. Then I continued to the harbor. I wanted to leave Nigeria and take the next ferry to Cameroon. 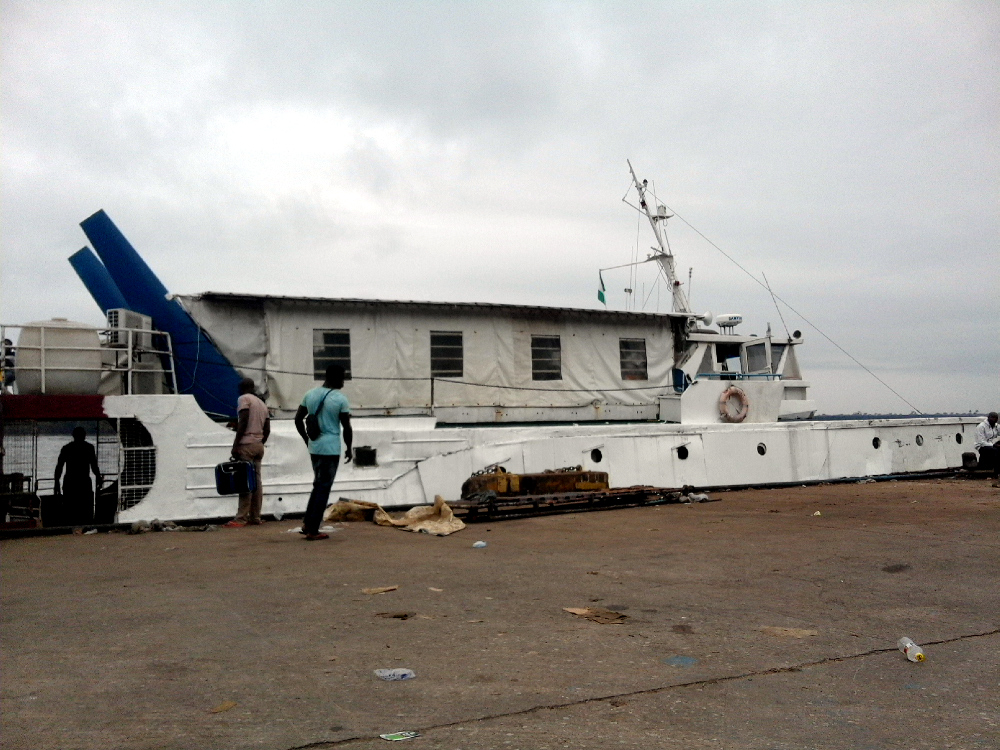 I promptly bought a ticket for the next day. Departure was supposed to be early the next morning and therefore I also slept on the ferry.

Of course, it took longer than announced until everything was loaded and we finally got underway.

When I bought the ticket, I met the owner of the ferry company. He was so enthralled by my trip that he didn’t charge me for the bike. To be on the safe side, he informed the guys who loaded the cargo that they mustn’t ask me for money.

But we were in Africa and of course they demanded that I pay, even more than I had paid for the ticket. By now I had learned that sometimes one just has to sit it out. I refused to pay and my bike stayed on land, locked, and guarded.

Next morning, I asked the woman from whom I had bought the ticket that she should take care of the problem. My bike was immediately loaded, without any extra cost.

Also typical for Africa: if you ask three people in charge when the boat will leave, one gets four different answers. The forecast was from 6 to 10 am. We finally left at 11 am. 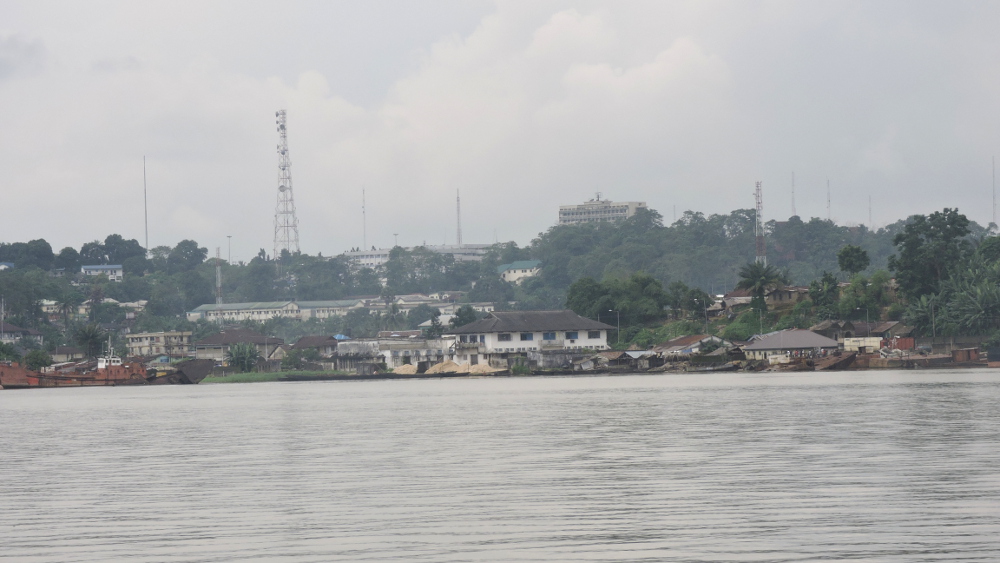 On board I met the first white person in all of Nigeria, a young American. When we cruised through the Niger delta, he asked if I thought we might be robbed. “Too late now to be worried about it”.

The previous ferry company went bankrupt because there had been too many robberies. I hadn’t heard anything about recent attacks. Nevertheless, it was a strange feeling to cruise among the oil platforms which had recently been targeted.

Nigeria was the only country in which I didn’t camp even once. Fortunately, I always found guest houses in which I felt very safe. During the day time, I was only afraid of the traffic.

Certainly Nigeria is  one of the only countries I do not recommend as a destination for cycling touring.