Startseite » Africa tour in English » Kenya – through the North

Kenya – through the North

From Nairobi around Mount Kenya, through the desert to the border with Ethiopia.

A few years ago, the route to the northern border was considered to be one of the most dangerous ones. The route crosses a desert-like landscapes for hundreds of kilometers. Robberies were daily occurrences. How about today?

I stayed in Nairobi for a long time and could research the route ahead. As usual, I didn’t know what was ahead. Sometimes that’s exciting and at other times it can be foolish.

I was grateful to Willy Bennet who had cycled the route two weeks before me and you told me where to get water.

Since the whole route was paved, there were hardly any robberies. That was positive. But there was a severe drought in the north. The Nomads could be aggressive if they didn’t get water.

For now, I was relaxed about it.

I had a heavy heart when I left the “Jungle Junction” in Karen. It had been a great place to relax.

In order to escape the traffic chaos in the city, I stayed on the “motorway”. 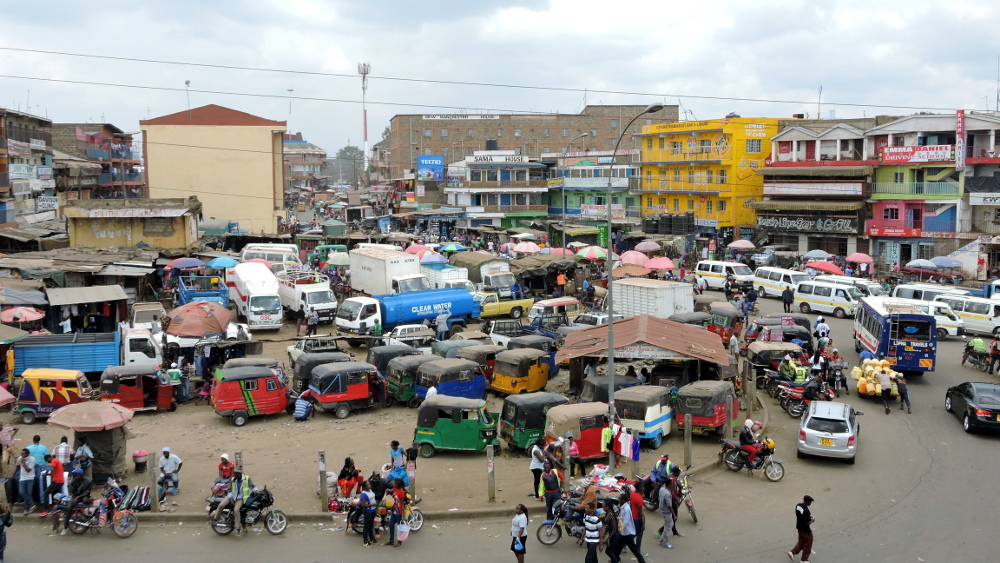 From up high and with distance, the commotion was okay to watch.

On August 8 there had been elections but the results were cancelled. On October 17 there was a rerun and by then I wanted to be out of the country. This was also a place where elections usually turned into riots. For me the chaos of the election rallies was sufficient. 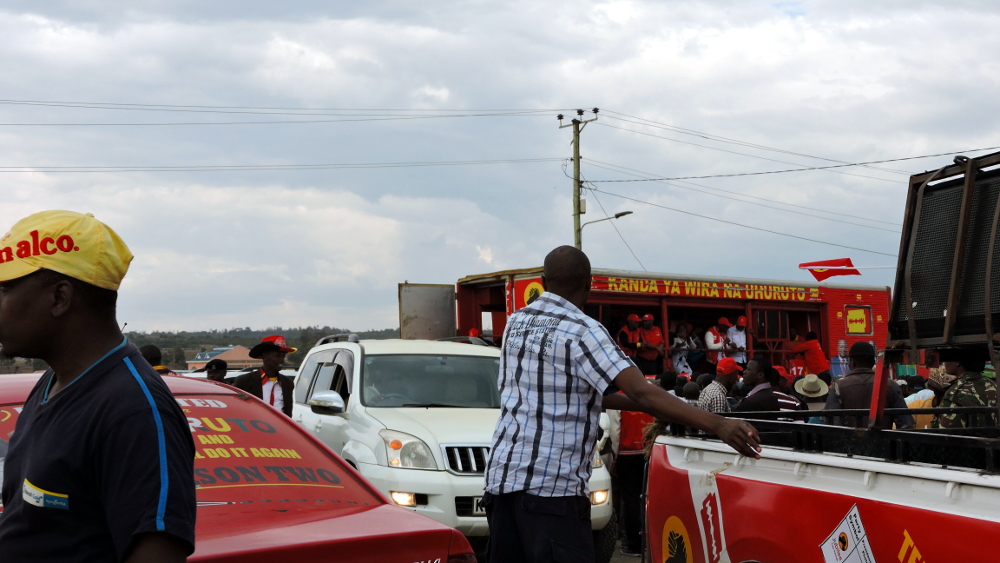 Whole roads were blocked, nothing moved. I even had difficulties to make my way with a fully loaded bike. Fortunately, the election events were confined to Saturdays. On other days, it was quiet.

The police stations were the best place to camp. Even my bike had a sheltered place against the strong rains in the evening. 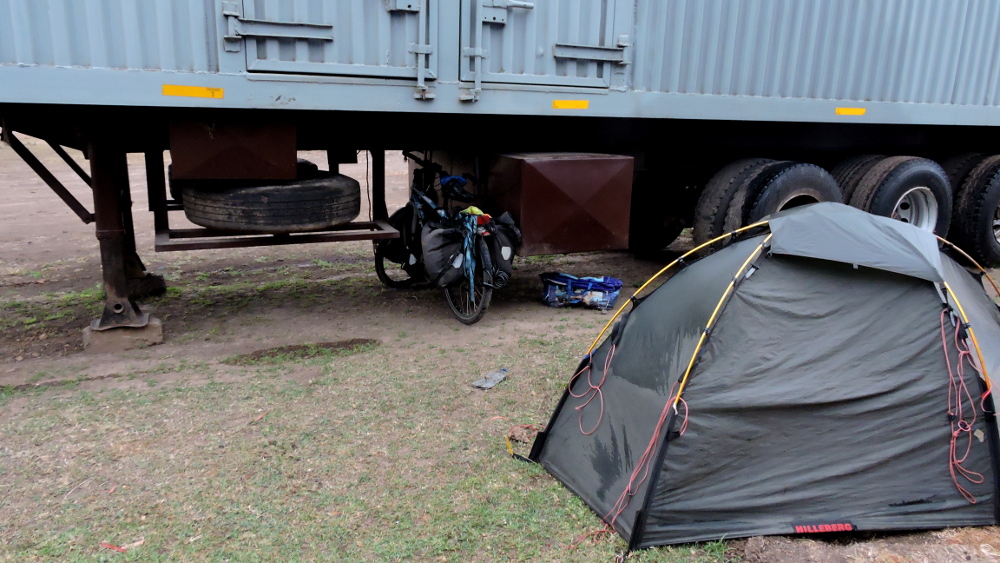 Ahead of Mount Kenya, I finally left the southern hemisphere. 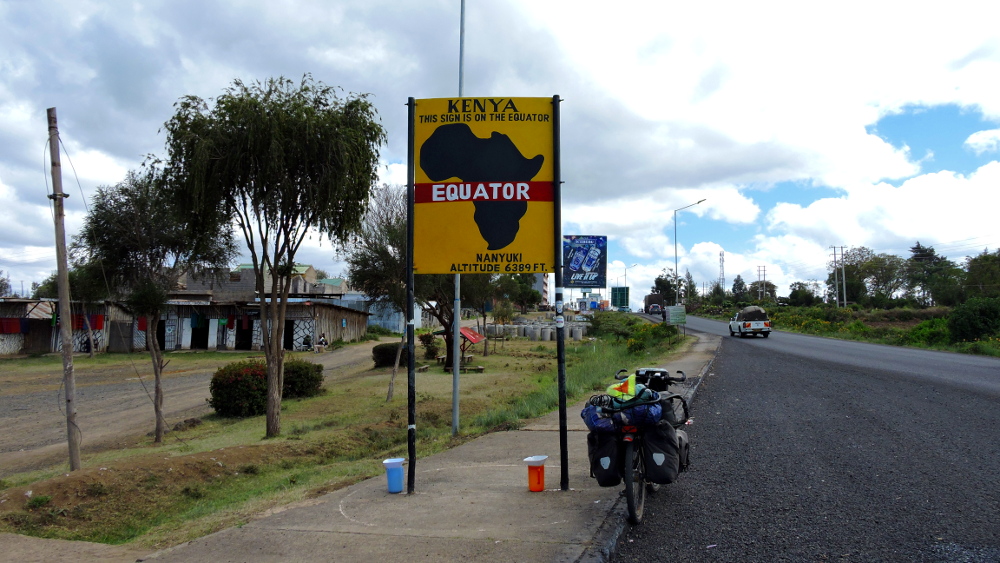 I was often asked what I did with my fully loaded bike, for example when I went shopping. 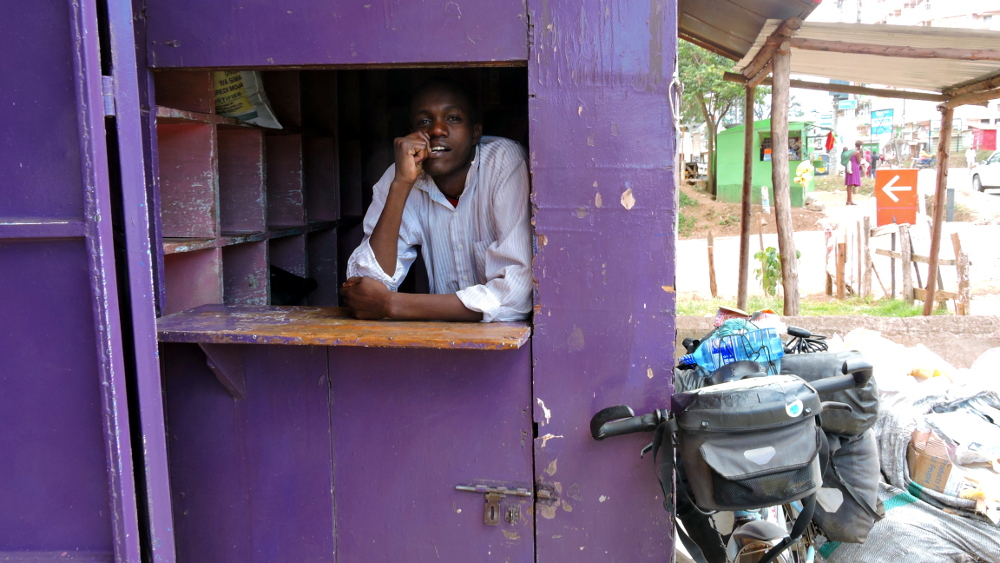 There wasn’t always such a nice person to watch the bike but I never had problems (except in South Africa where the bike computer was stolen).

I had been worried that the giant Mount Kenya would be hidden the same way as Kilimanjaro. 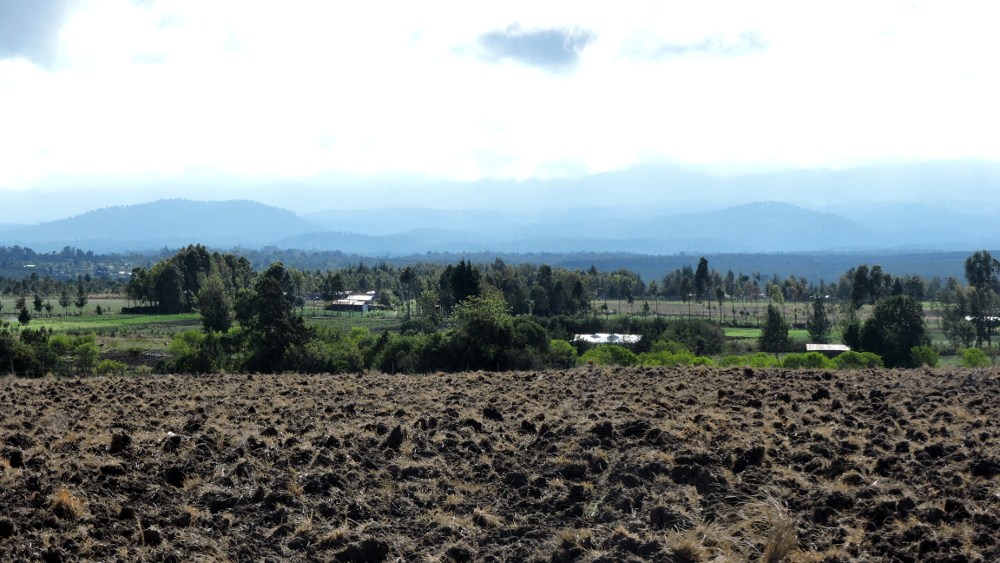 When I woke up on the last morning, there it was in all its glory and beauty. 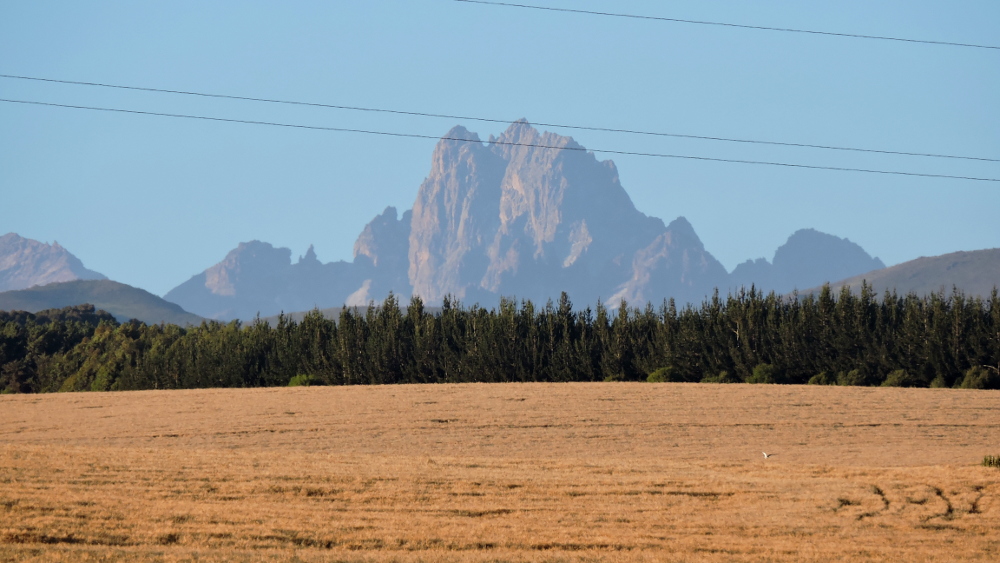 Thirty years ago, I had climbed to the top which I couldn’t imagine doing today.

My camping site was the highest one in the area at 2,500 meters. There were giant wheat fields which belonged to the Kisima Farm. 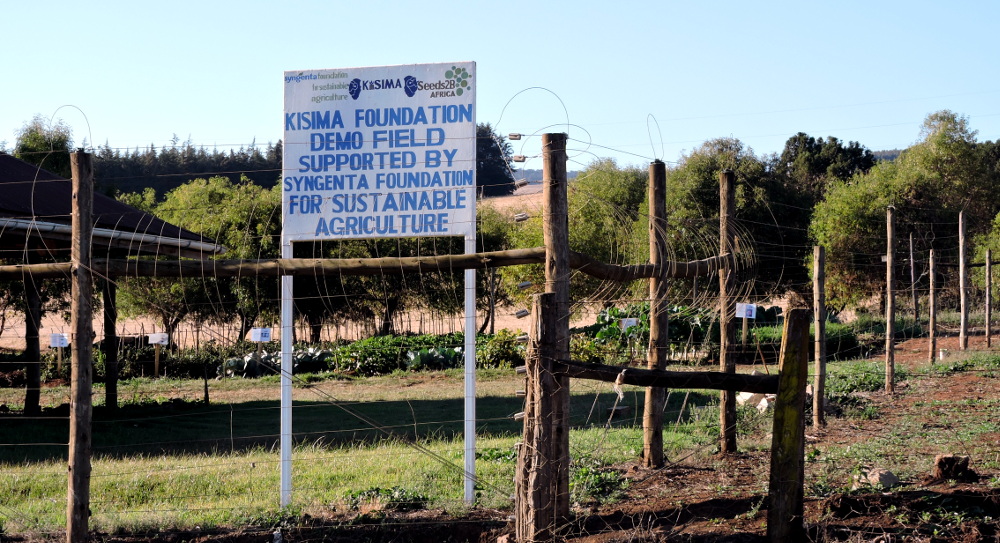 Sounded fine but Syngeta was involved and I had my doubts. The locals only had a narrow strip between the fence and the road which they cultivated. 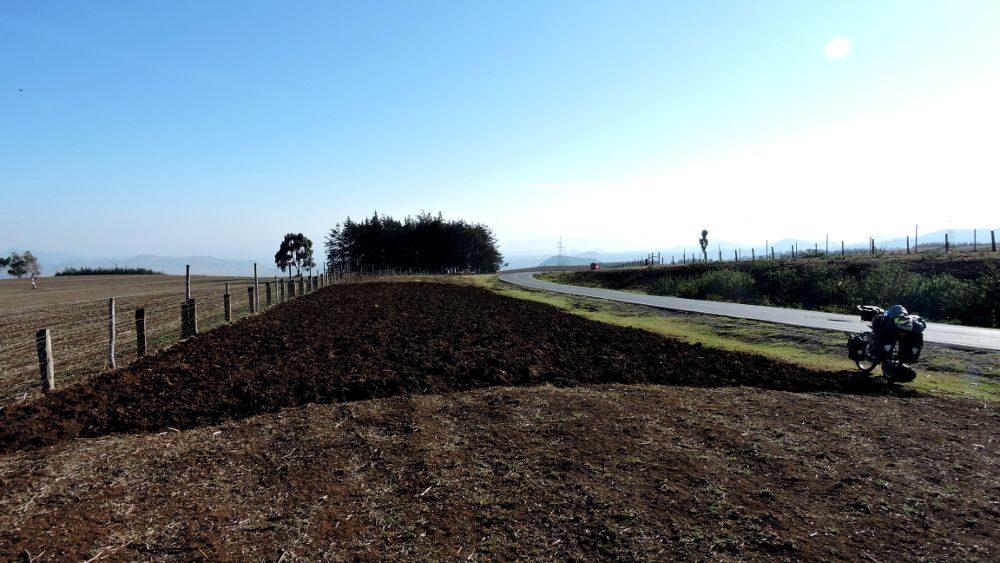 Like at Lake Naivasha there were many greenhouses which were for export flowers for the European market. Much of the water runoff from Mount Kenya was captured for this cultivation in dams. And on the road, trucks from the World Food Project rolled by. One must ask questions. In particular because people in the north didn’t have water.

I rapidly descended to Isiolo which was at 1,000 meters above sea level. The view of the desert which lay ahead was amazing. In Isiolo I shed a few layers of clothing. This was the start of the desert. 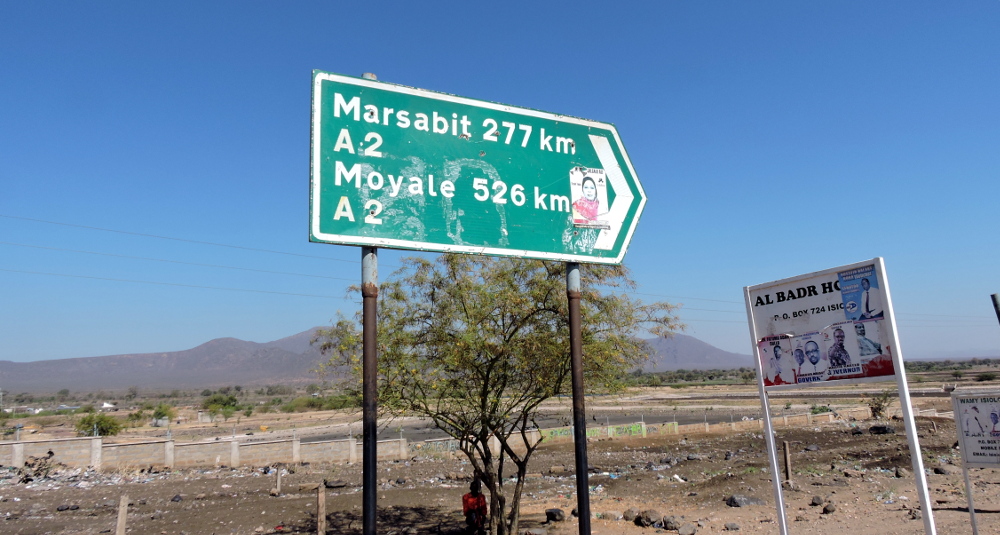 And I saw the first nomadic tribes, the Samburu. They didn’t want to be photographed.

I camped at the police station in Sere-O-Lipi. What a difference to the previous night. Then it had been green with lots of flowers and bitterly cold. Now it was only desert, pitch dark, and very warm.

At the beginning of the desert was a river with a bit of water. 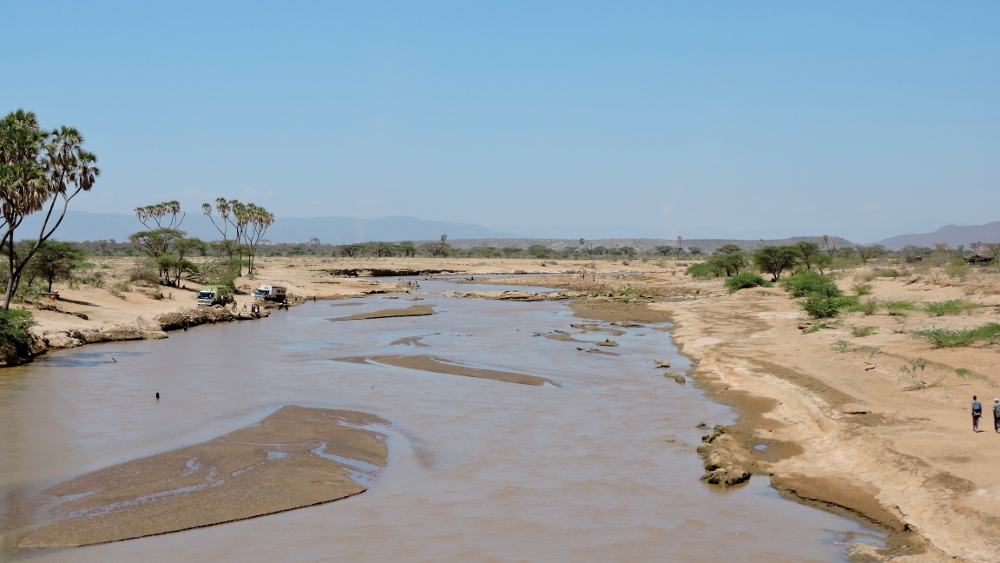 Afterwards it was only dry. 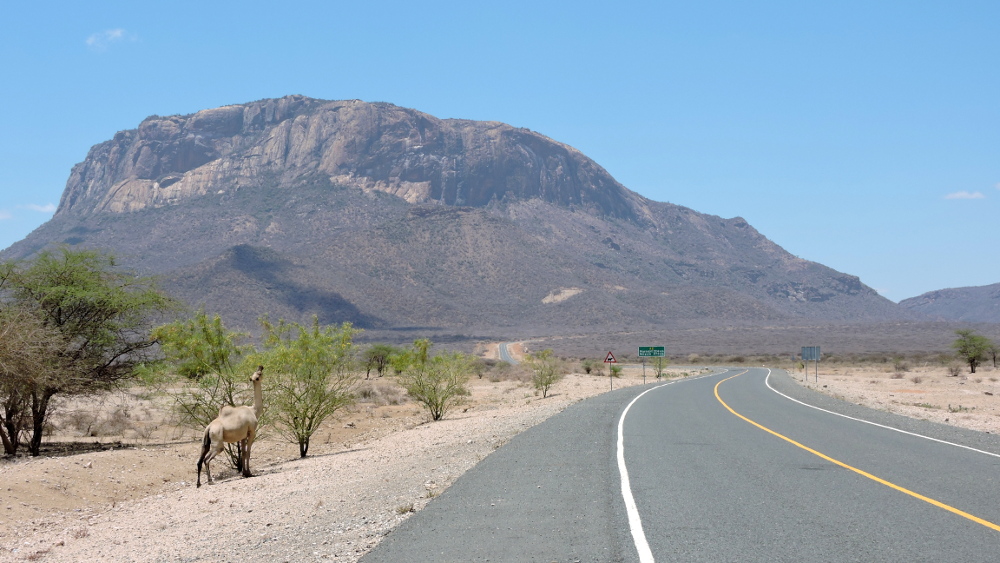 There was an unbelievable number of camels in the area. 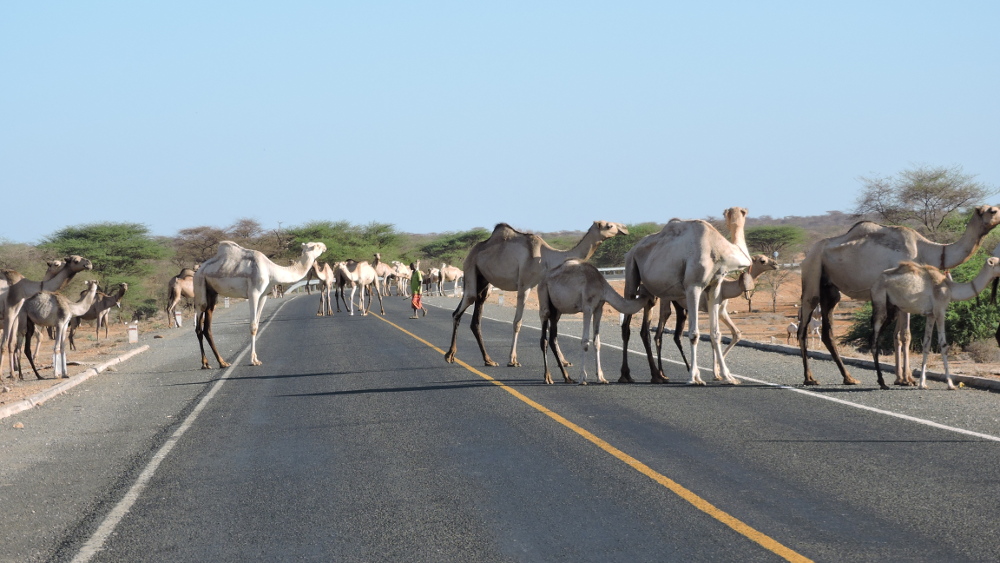 They had to roam far and wide to find water. 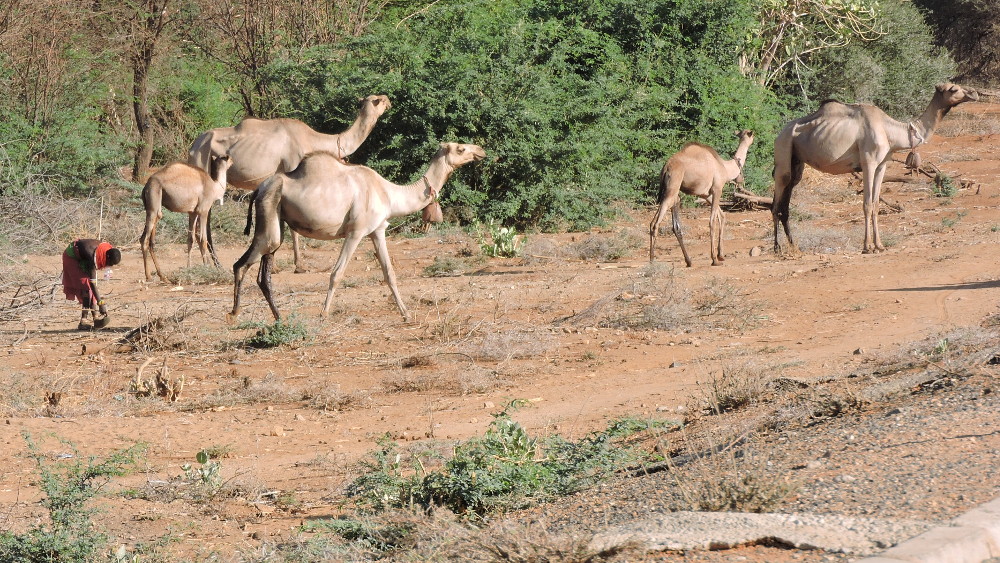 The next river bed was dried out. 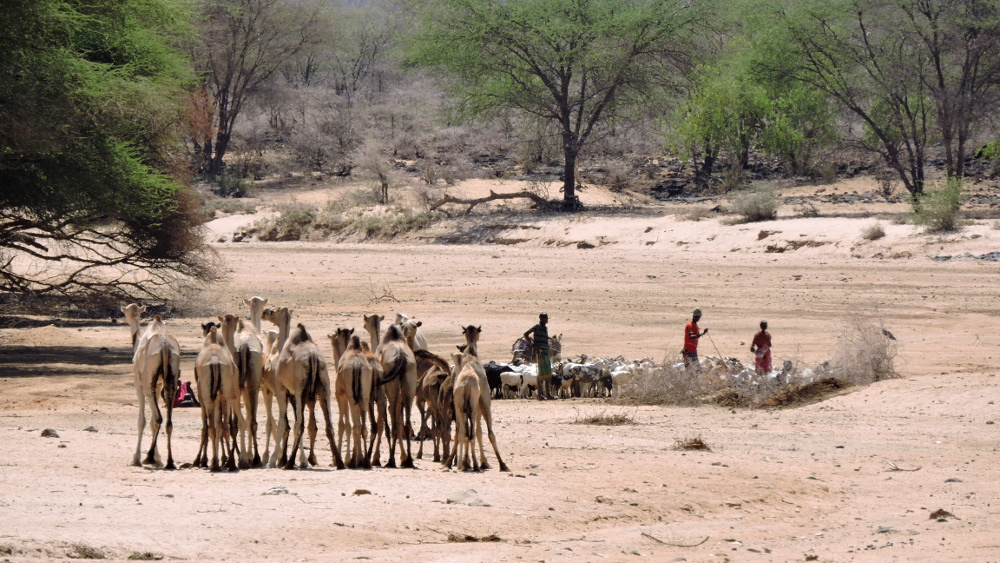 In many places there was still water underground. Nevertheless, I had a hard time to believe how one could live here. 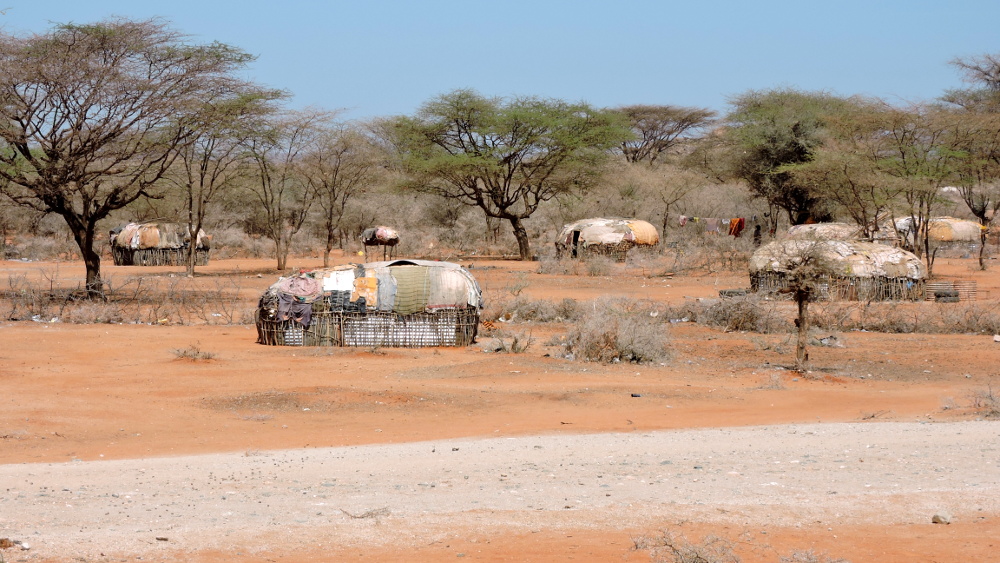 Shortly after the Merille Bridge I had my first encounter with stone-throwing kids. A boy even aimed his machete at me which landed very closely next to me. He didn’t count on me picking it up and quickly cycling away. Then they really pelted me with stones. But I was faster and no stone hit me. After a few kilometers I threw away the machete for which I had no use. It had been the last time that the boy could throw it.

Afterwards it was peaceful and I could enjoy the scenery. 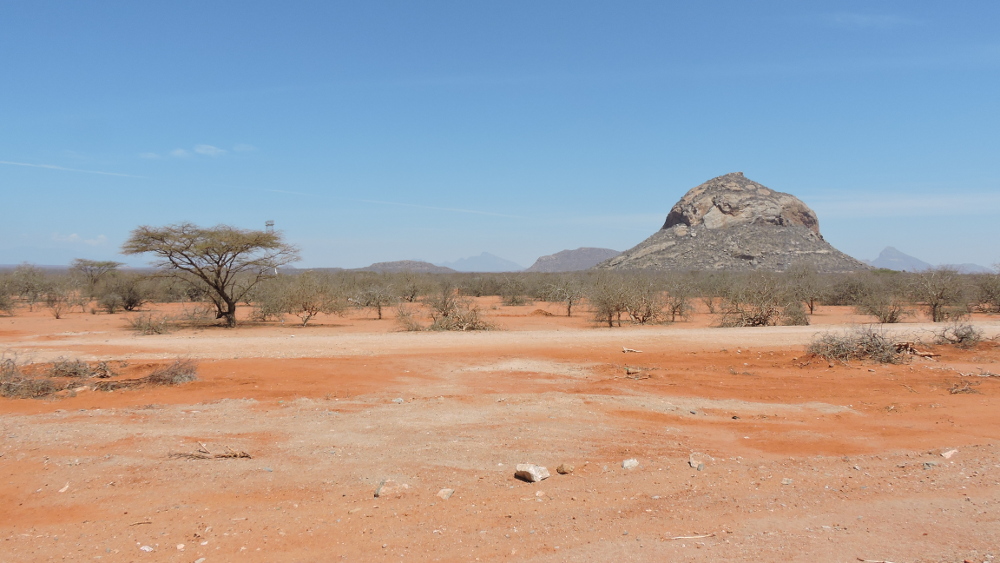 Another boy, far away from any village, asked for water. He got one of my small bottles which I had fixed on my front pannier. Then I was allowed to take his picture. 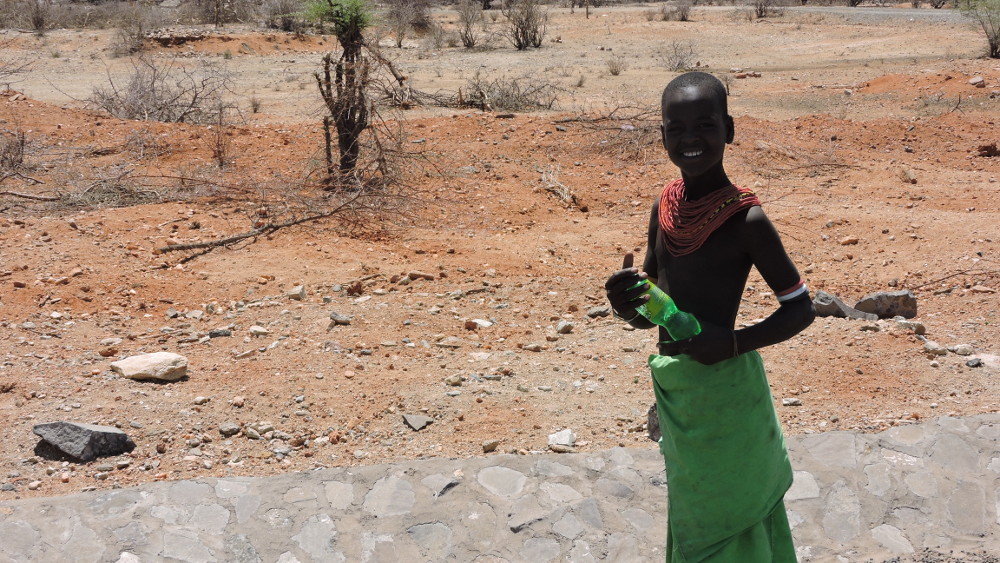 Later on, children, who were near a town with water, also asked for water but I didn’t give them any. In return, they threw stones at me but none reached its target.

Before Moyale I crossed a plain where there were warnings for strong crosswinds. 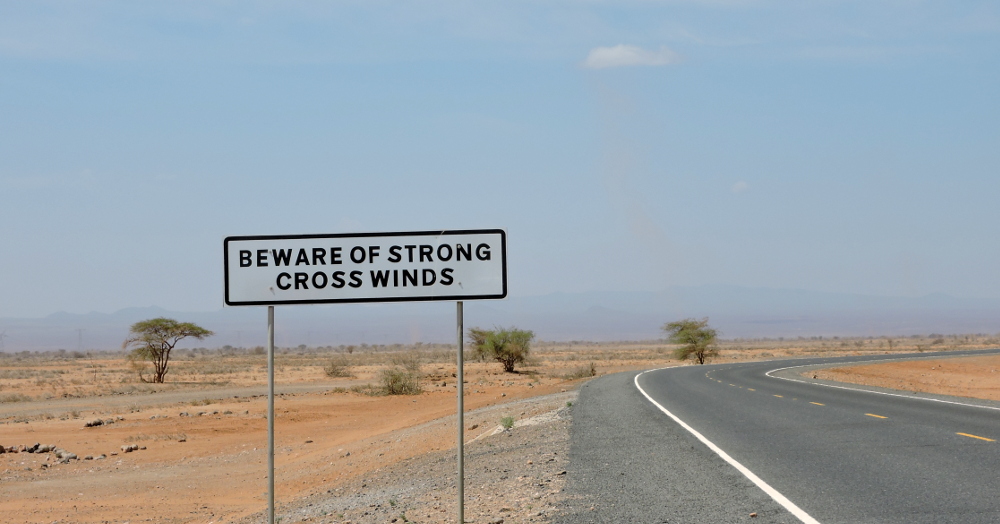 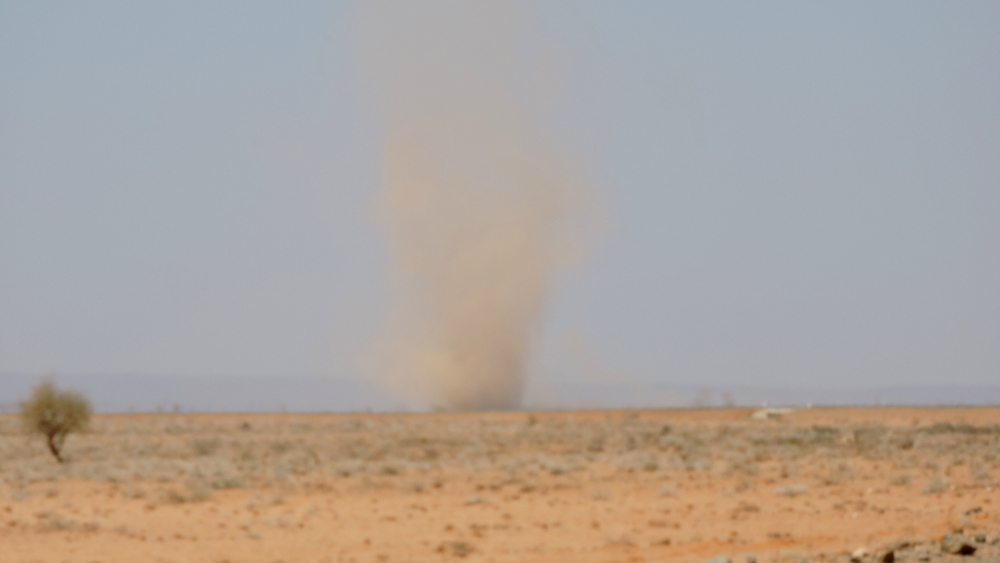 Incredible strong winds picked up the sand. Fortunately, the road was so windy that every once in a while, I had tailwinds.

Once again, I asked myself what Africa would do without the yellow jerry cans. 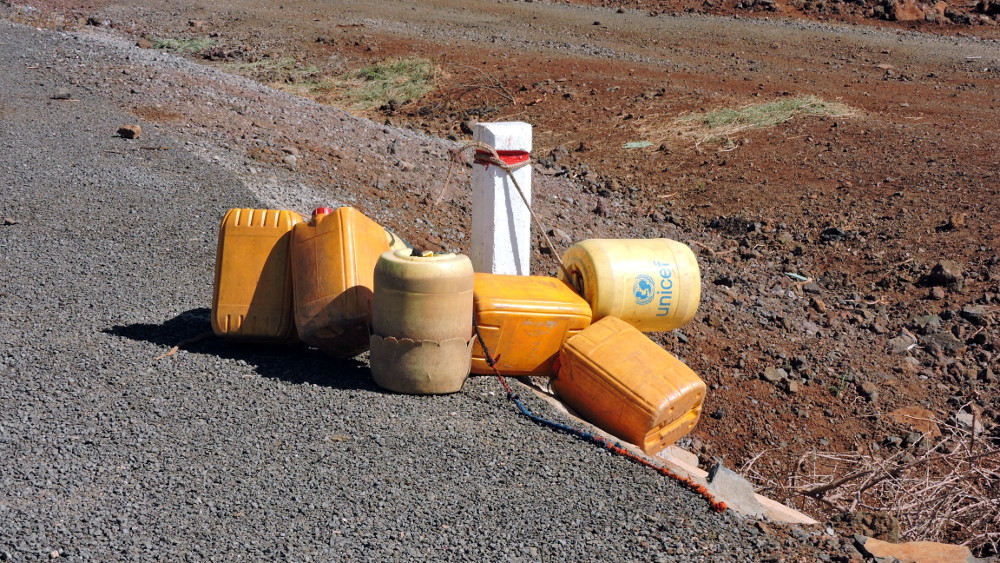 There were even round once which could be pulled behind. At this “depot”, they had UNICEF stickers.

At “Camp Henry” in Marsabit, I spent a rest day. Henry was born in Switzerland and has lived here for decades. He had married a woman from the Gobra tribe and there was a typical Gobra house at the camp. 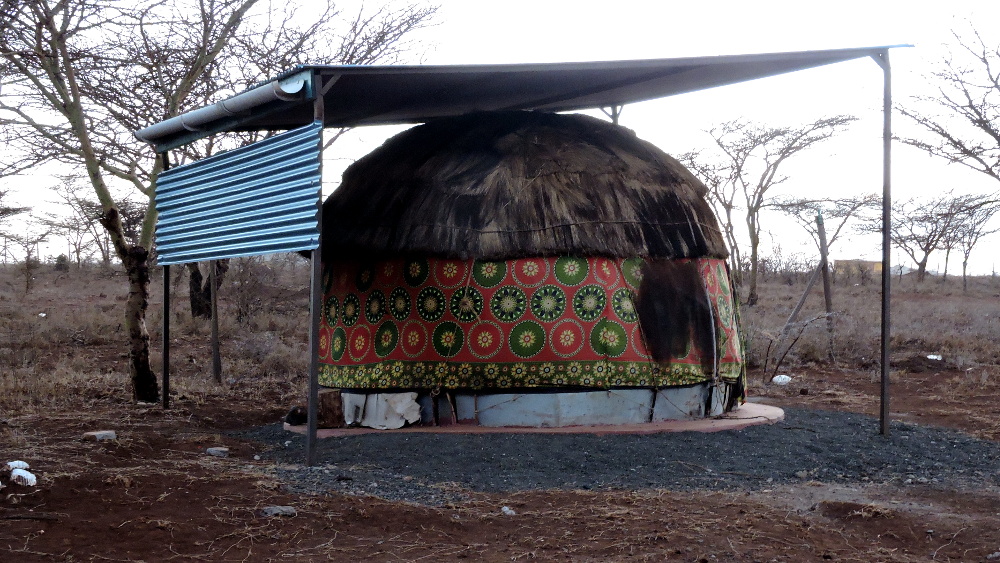 It was a convenient as a yurt, easy to mount and take down. Gobras are or were nomadic, like all tribes in the north. More and more they settle in towns. 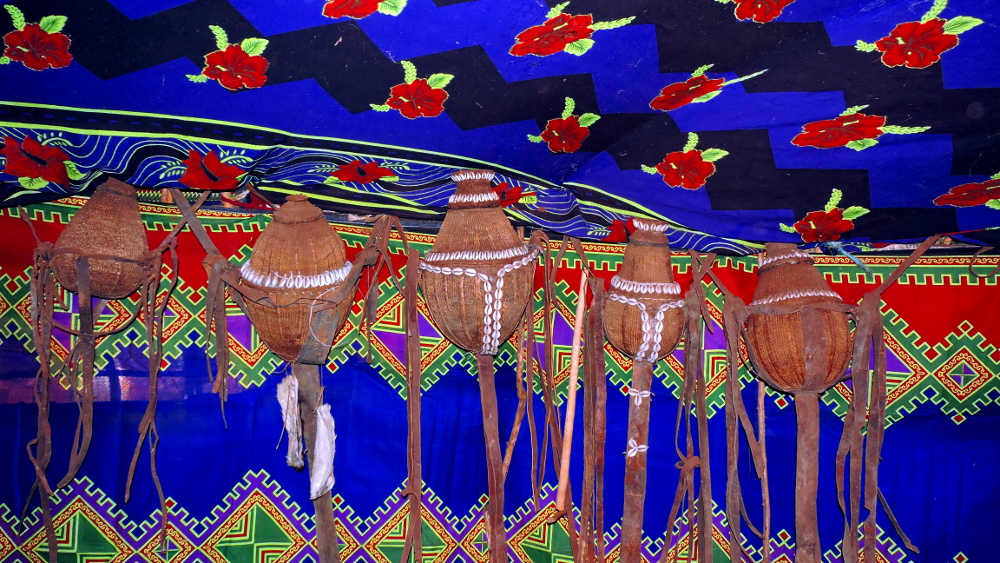 These water canisters were woven from grass. They were not only watertight but also kept the water cool.

Marsabit was at an altitude of 1,400 meters. It cooled off at night and I slept well. But there was always a strong wind. I think it never stopped. Camp Henry had pleasant, wind sheltered places which I didn’t want to leave. But I also didn’t want to stay.

After two nights and with resupplied provisions, I tackled the remaining 245 kilometers in Kenya.

There was a nice descent after Marsabit. The temperature increased, there was less wind but now it was mainly headwinds.

In the town of Bursia, I met a Gobra woman who spoke good English. She had never been to school but her husband had taught her. I had a simple conversation with her and some other women. I thought they were very beautiful. They had sparkling eyes and very white teeth. Wrapped in their colorful clothing, they were a fascinating site. 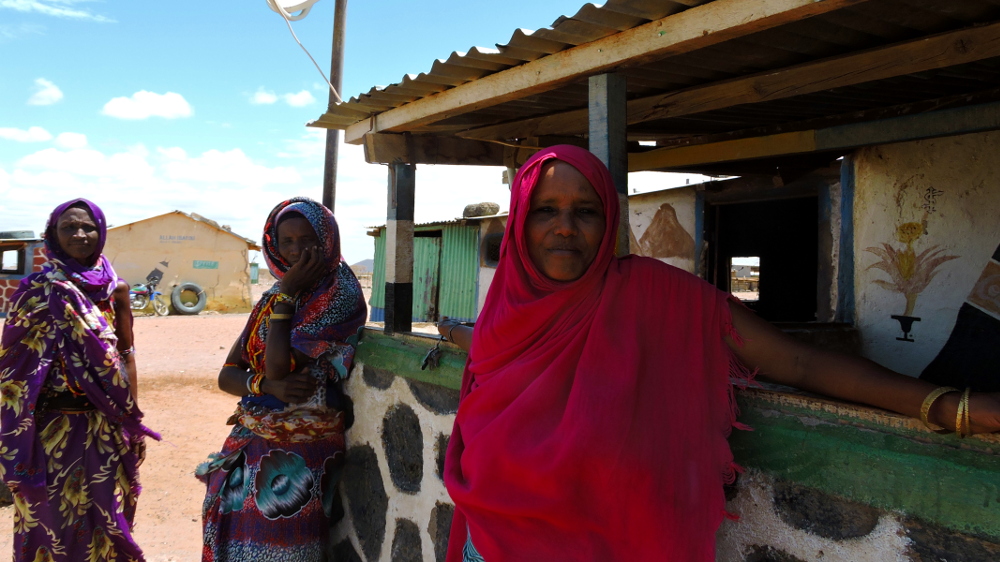 After I had told them how beautiful they were, I could take their photos.

It was very interesting to cycle through the desert. In this area, there were many different tribes, and in addition to the camels, other animals. 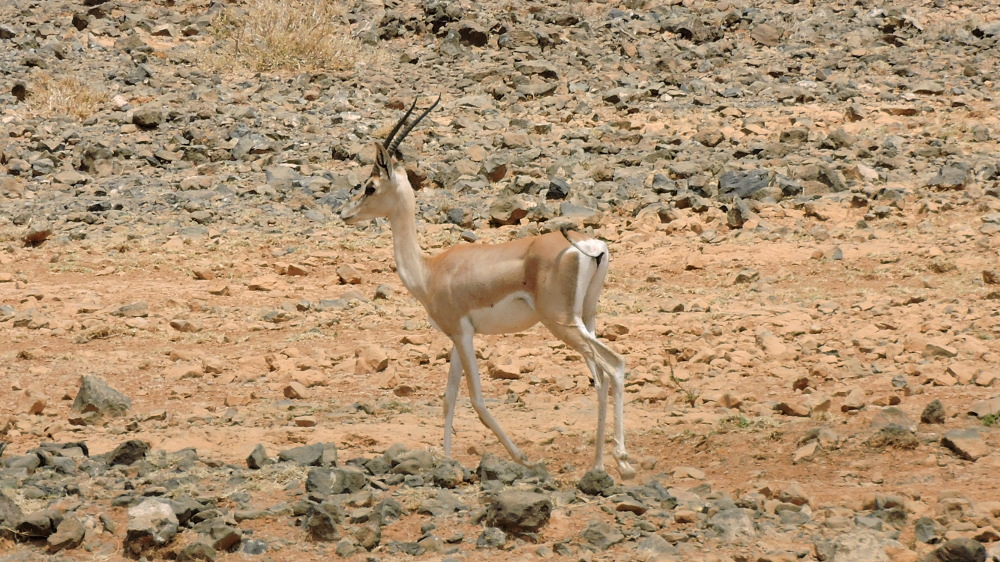 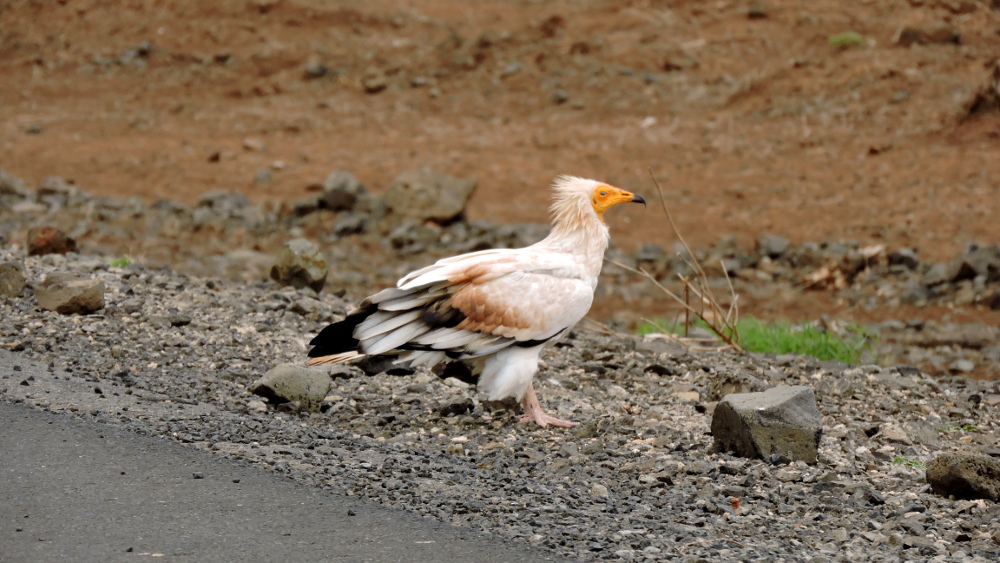 At a manageable distance there were towns where I could get water. Often I had to buy bottles because there was no other option. I was especially happy when I could get a cold drink, for example at the Hotel Tico. 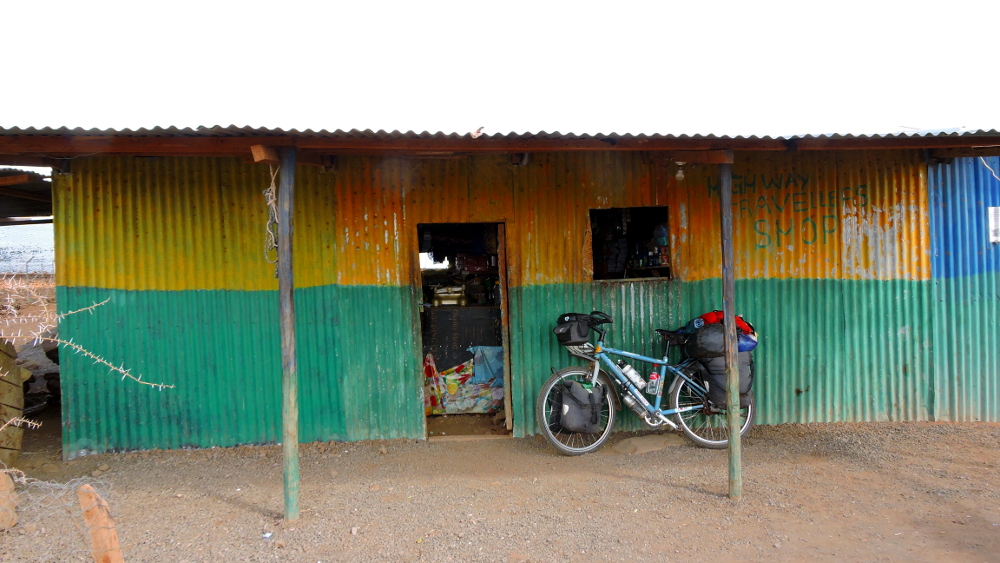 Suddenly in the middle of nowhere there were colorful huts. Otherwise there were only tall antennas. “Hotel” didn’t mean that one could stay there. Most often, one could get cold drinks and food.

The closer I got to Ethiopia, the more mountainous it got and there were headwinds. I was fortunate that there was a small police station ten kilometers before the border town of Moyales. Afterwards the mountains got really steep and I didn’t want to tackle them. I was pretty exhausted and didn’t even want to cycle to the next shop to buy something to drink. A nice policeman did that for me. Thank you!

When I continued the next day, there was so much trash on the road, that I knew I might get a flat. Indeed, two kilometers later there was a loud Zisssscccchhhhh. My first flat tire in a long while. 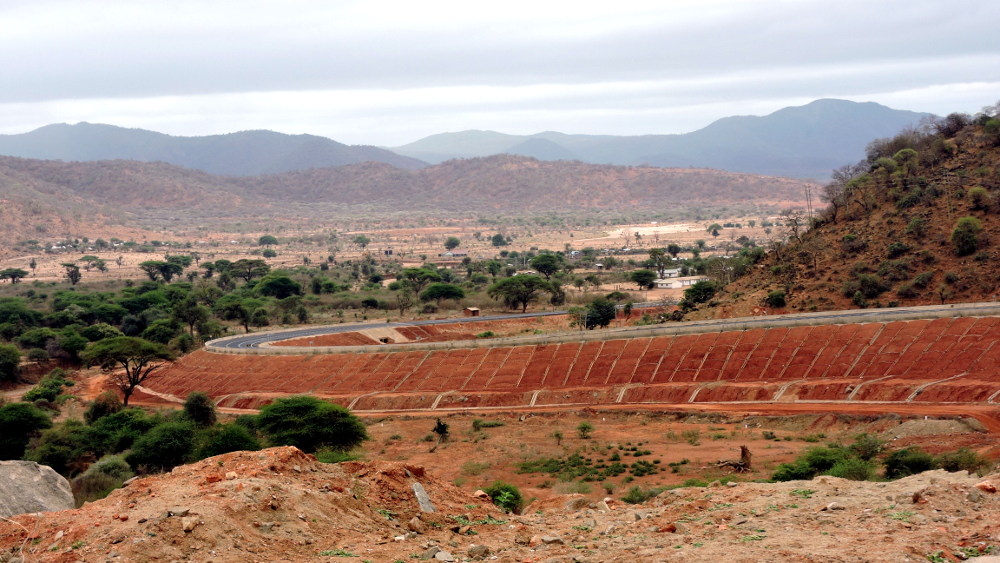 It was already 10 am when I reached Moyales and the border with Ethiopia.

Ahead of me was Ethiopia. No cyclist had anything positive to say about it. I didn’t like the idea of encountering stone-throwing children. Read about my experiences in that special country in my next blog.