Africa was turning green and pleasant

“Gabon is a relatively safe travel destination”, according to the German foreign office. Cameroon had already been lush and pleasant and Gabon was even better. Perhaps not everyone knows about Gabon but a German from Elsace built a hospital there and became world famous. Who knows him?

Without a second thought I approached the border because so far everything had been more or less uncomplicated. I was very surprised when border control didn’t want to let me through. I asked him if something was wrong with the visa.  No, no everything was in order but elections were approaching and they were worried about unrest. He first needed to check with his boss whether I could enter.

I presented my best side, showed how well equipped I was, well prepared, and pointed out on the map which route I was planning to take to Congo Brazzaville. And I had a lot of experience in Africa. Gabon was my 14th African country.

That convinced him and I was admitted. I was told to get the entry stamp in Bitam, the next larger town.

It was a Saturday. Everyone in town wore a “Ali” T-shirt or a baseball cap. The current president had a lot of eager election volunteers. While in Gabon, I often came across “Ali” advertising.

On my first evening, I made a great discovery: I went to a house which had a Gabonese flag outside. I asked whether this was a police station. No, the chief of the village lived there. I wanted to find out where to camp. That wasn’t a problem here and immediately I was offered the covered meeting place for camping.

By the way, the chief was a woman.

I took the same approach the next few evenings. The flag easily identified the house of the chief which most of the time was a woman. 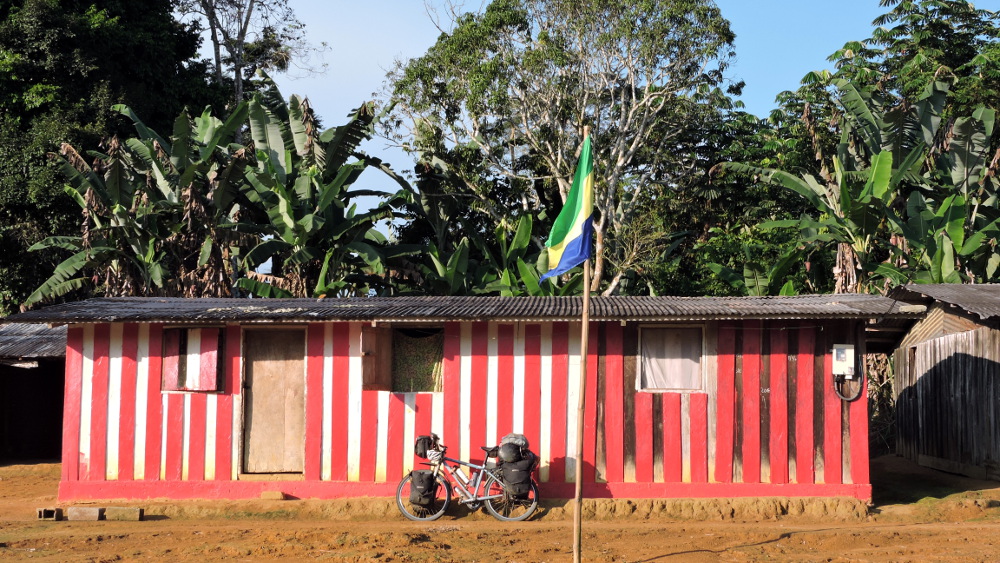 The north of the country was more or less dense jungle. The Chinese were in the process to build the roads and to log the forest.

In exchange they were building a giant soccer stadium for the Africa Cup. 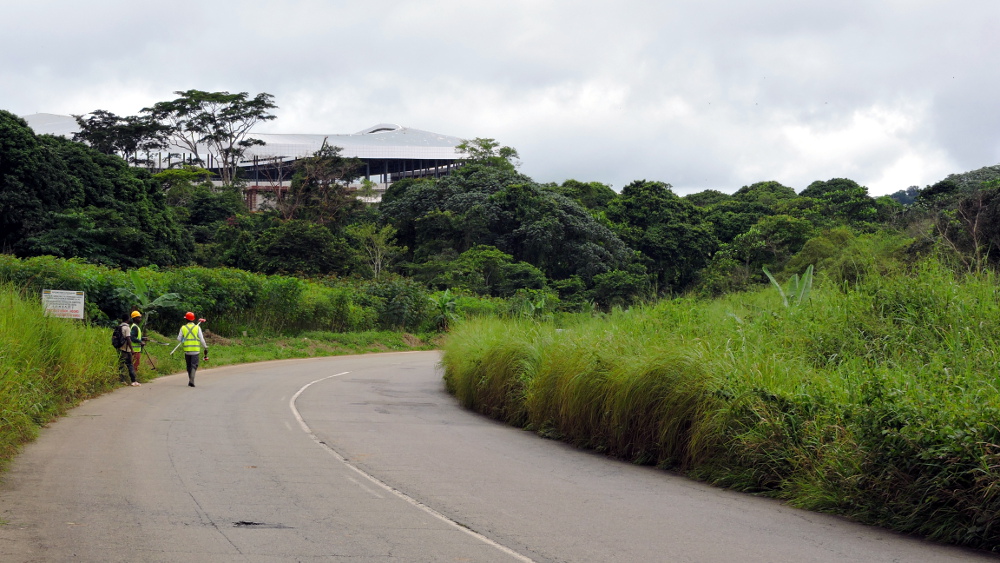 It appeared like a sphinx from the ashes right in the middle of the jungle. It was supposed to have 25,000 seats. ???? Where would all the people come from? I asked one of the workers. “There’s a large city nearby”. He referred to Oyem which was 17 kilometers away and had 38,000 inhabitants. How should the spectators get there? For now there was no infrastructure. But fear not, the Chinese would manage by 2017. Ali sent regards from one of his largest prestige projects.

Next door, the population lived in huts without water or electricity. 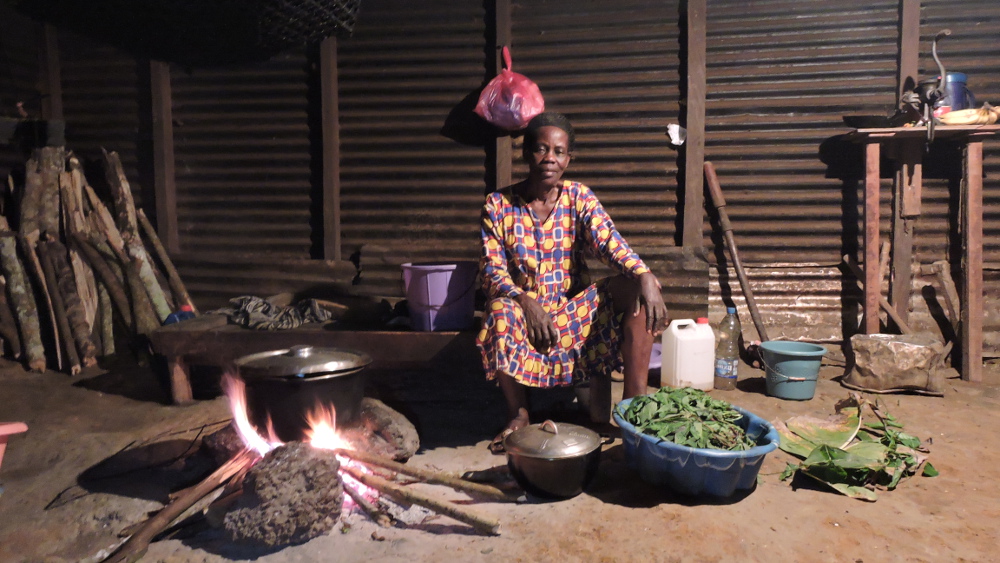 The closeness of the family didn’t stop after death. Usually the graves of the ancestors were clustered around the house. 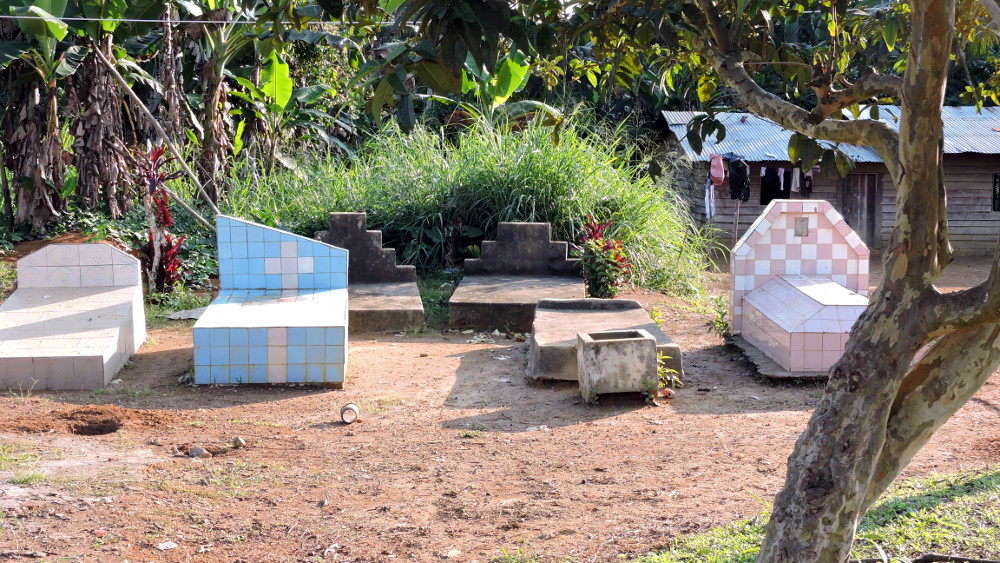 I couldn’t find out whether cemeteries didn’t exist or whether they were too expensive.

Different from other African countries, there were no mopeds. Very strange. Suddenly everything around me was very quiet. There were hardly any two-wheelers, including bikes. Instead there were one-wheelers, wheelbarrows, in which everything was transported: groceries, water canisters, clothing, siblings,….

Bikes would struggle with the long distances and steep hills. It was quite a distance from one village to the next. There was only noise when a Chinese wood truck passed by.

I was always happy when suddenly a store appeared 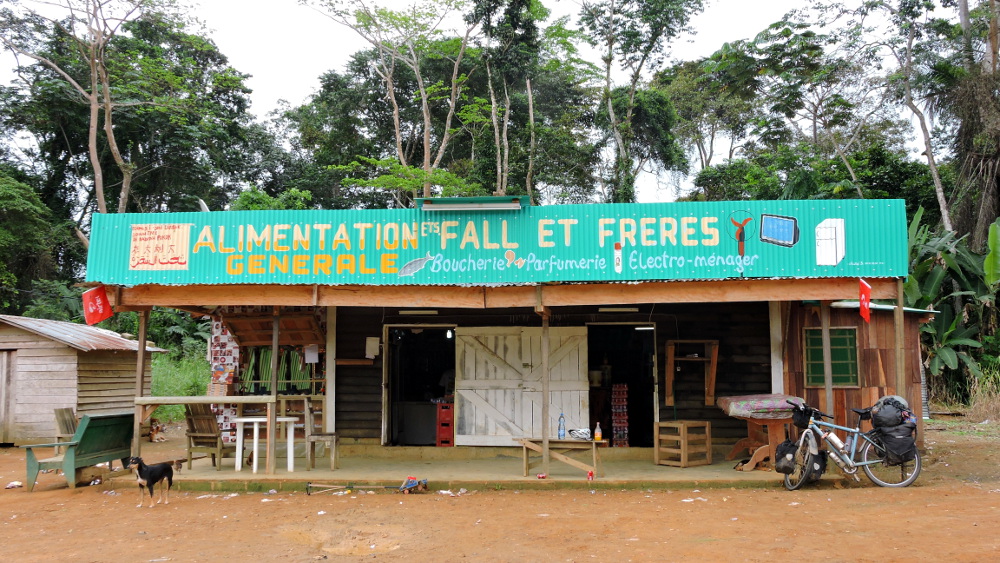 and I could get provisions.

Once again, bush meat was on offer for the locals. 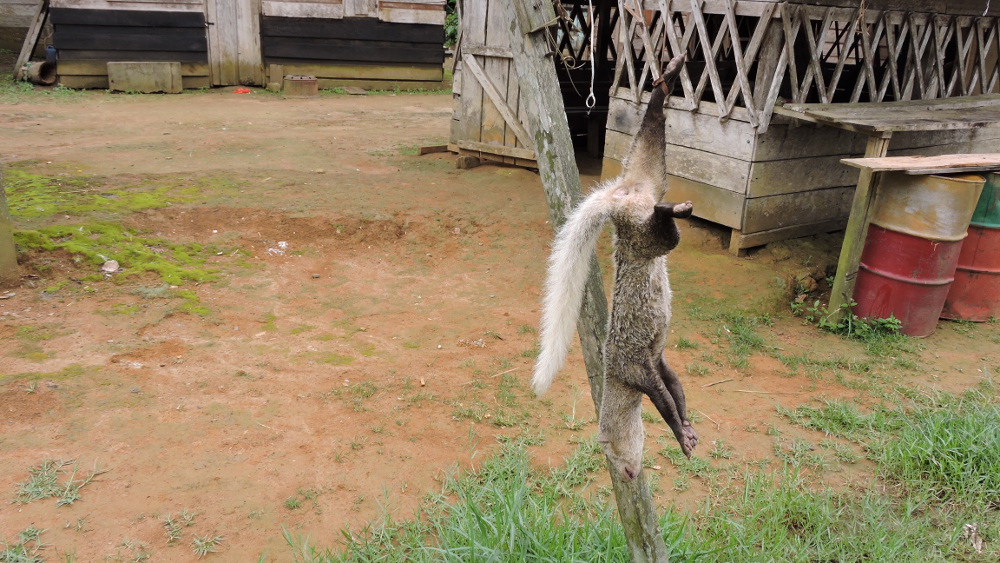 After I saw what scampered around, I didn’t feel like wild camping.

No lack of children 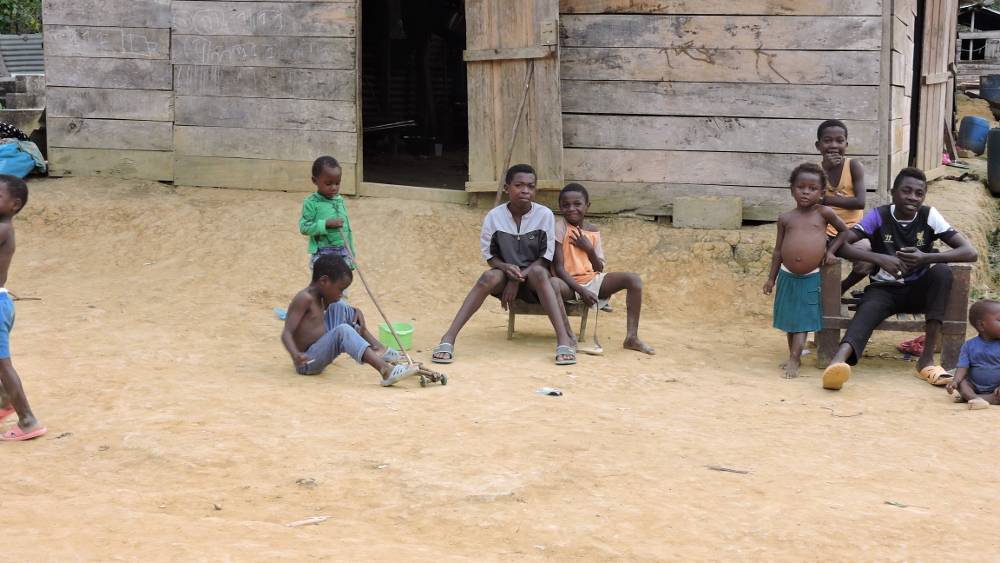 They were quieter and had seen white people before. I had the impression, when one wasn’t black and was in Africa, one had to be Chinese. Many times I was greeted with “Nihao Chinoas” or they called “Chinoas, chinoas” after me. One couldn’t ignore how many there were.

The kids didn’t beg. Adults often asked for medicine and feigned pain. When they were given drugs, they didn’t take them. I only offered Paracetamol which couldn’t go wrong.

When I climbed a hill, I almost passed the equator without noticing it. Fortunately ,there was a sign that pointed out the occasion. 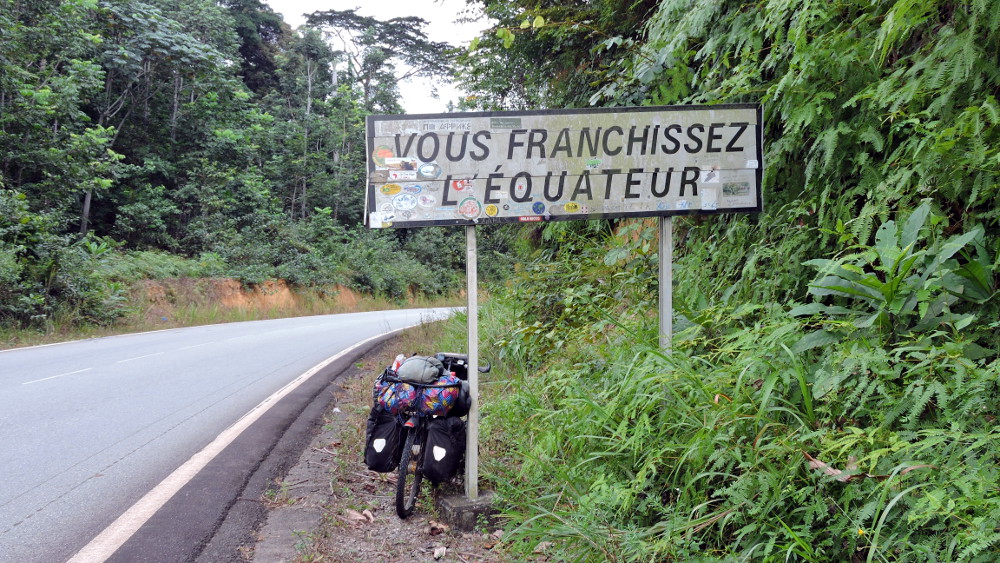 After a few kilometers I finally reached a larger town, Ndjole. How happy I was that I could resupply!

Unfortunately, the town was a big disappointment. It was situated on the Ogowe River and was a big stopping point for buses and rivers. There were a lot of markets, people, everything was very expensive, and the place was dirty. 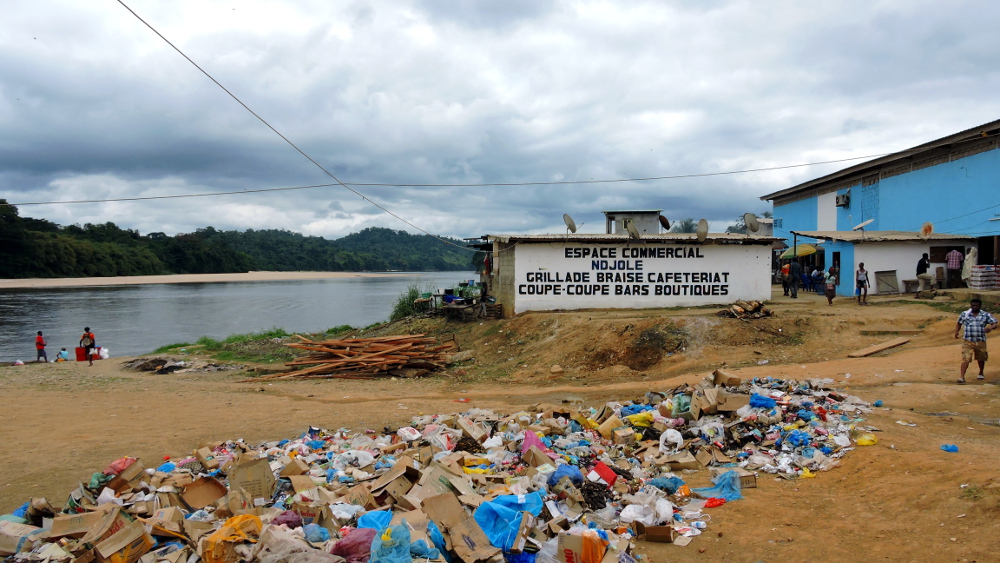 I was depressed and carried on.

I had assumed that after the town, the road would become flat but it was quite the opposite. I had a lot of climbing to do. 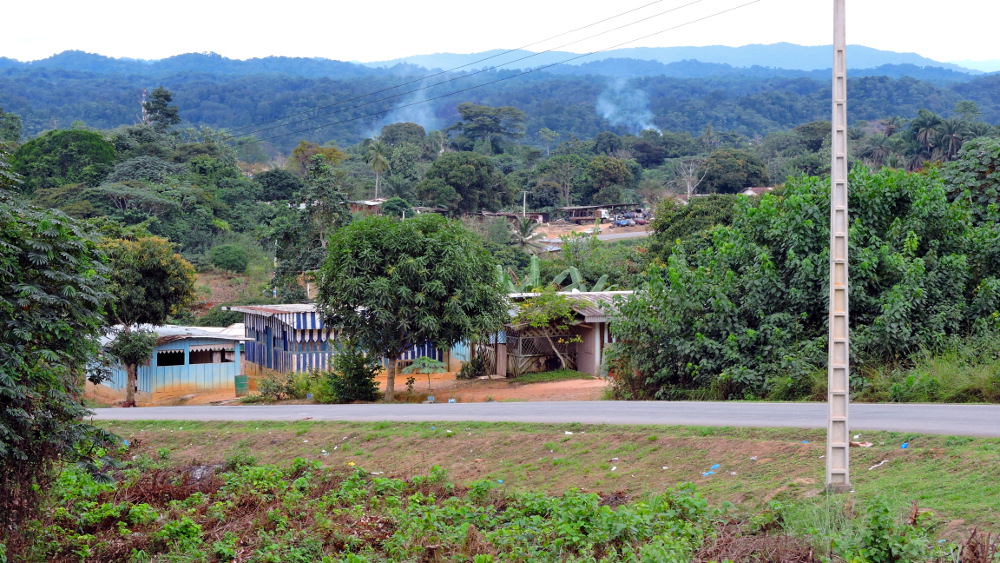 I was really exhausted and sometimes I had to push the bike. I wasn’t sure if I’d make it to the next village. But the jungle and the steep terrain didn’t lend themselves to camping.

Then an isolated hut appeared which was nice and charming. A man with a gun stood in front of it. Finally, someone I could ask about the next village.

“The village is after one kilometer uphill and then three kilometers downhill to the river.” Sigh, I barely made it.

Once again, there was a lady chief and I could camp at her place. 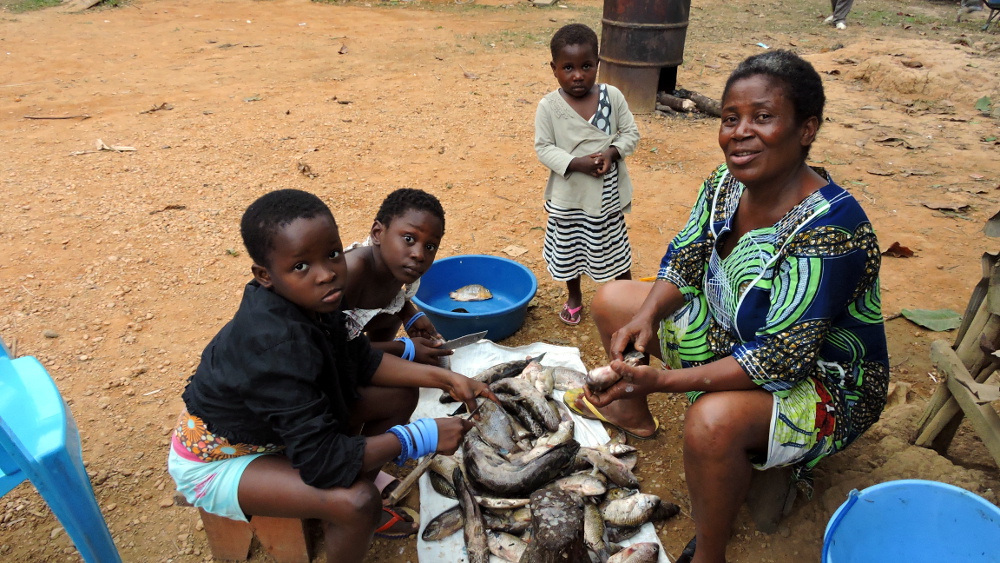 The children had gone fishing and had caught a lot. She was happy to sell a few fish to passing truck drivers and earned a few francs.

I once again refused politely.

From here onwards it was supposed to be flat. 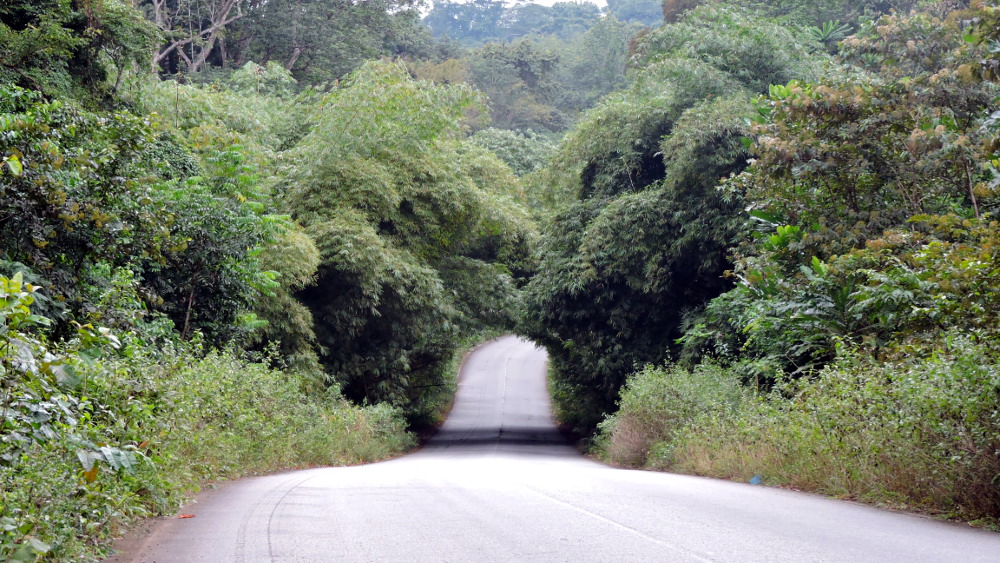 Eventually that happened but not during the first few kilometers.

At the turn off for Libreville, the capital, there wasn’t a town but fortunately a lot of shops where I could buy the most urgent supplies.

I didn’t take the road to Libreville and instead continued south.

The locals were offered a special kind of bush meat. 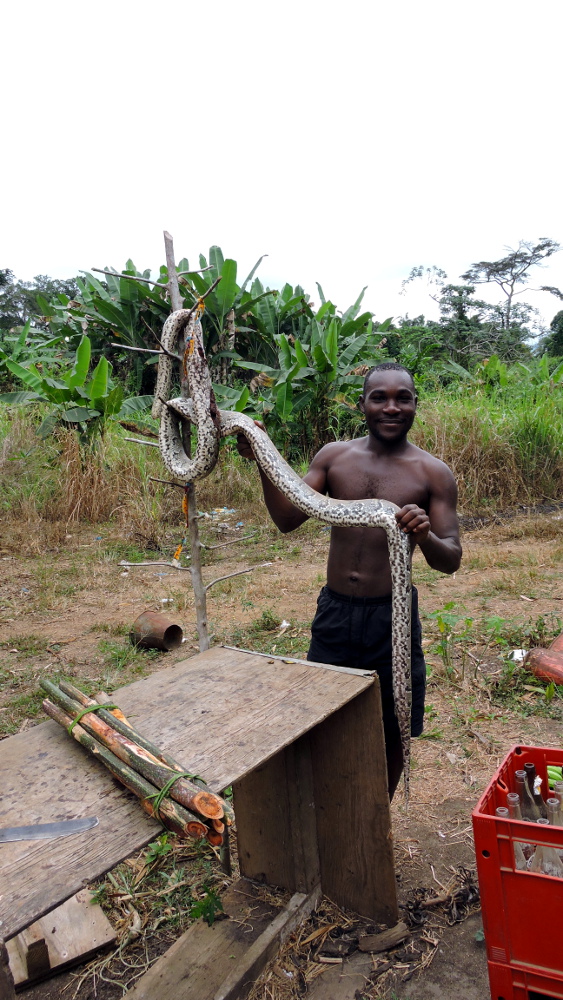 A viper or python, caught right here in the jungle. Now I was even less inclined to camp wild.

Slowly I approached the place which I had heard about since childhood. But I hadn’t quite realized that it was in Gabon. 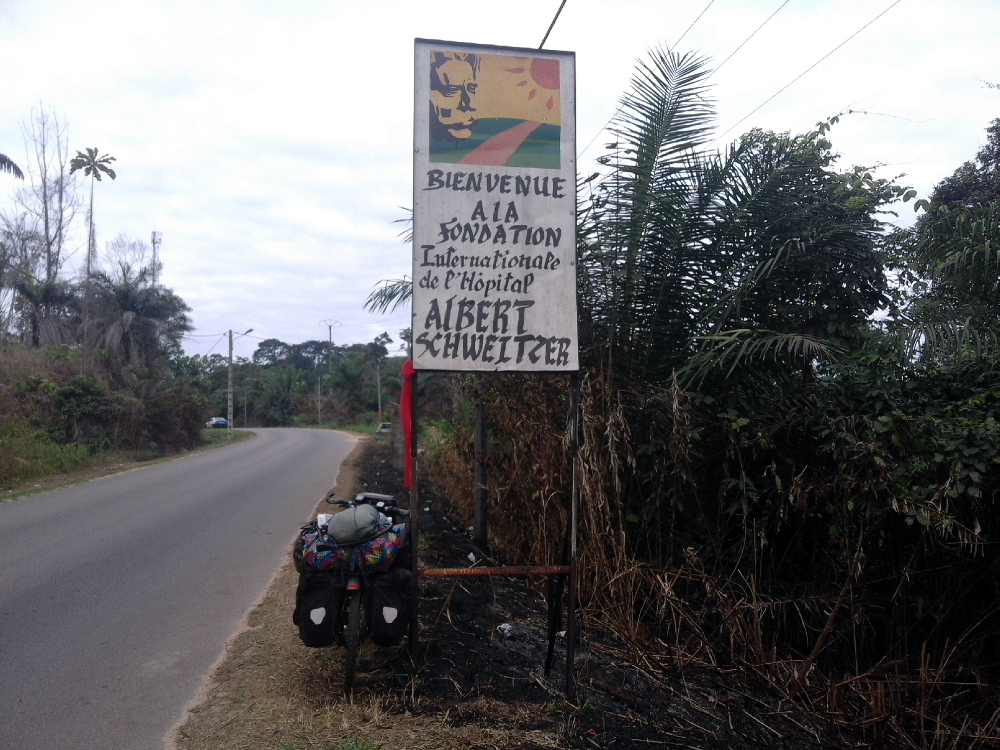 It was Lambarene, the village where Albert Schweitzer had built his jungle hospital. 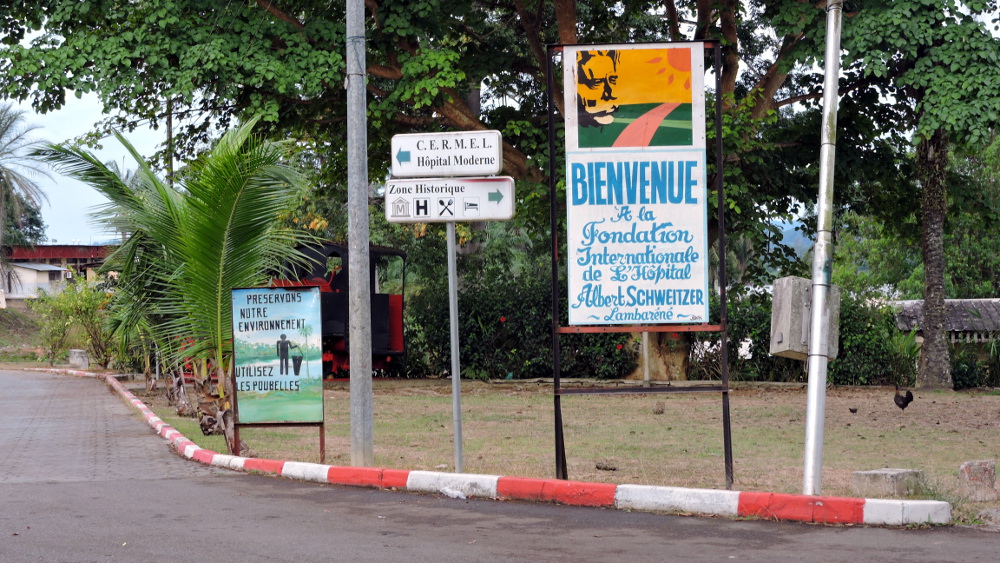 Now there was a new hospital at the same place. 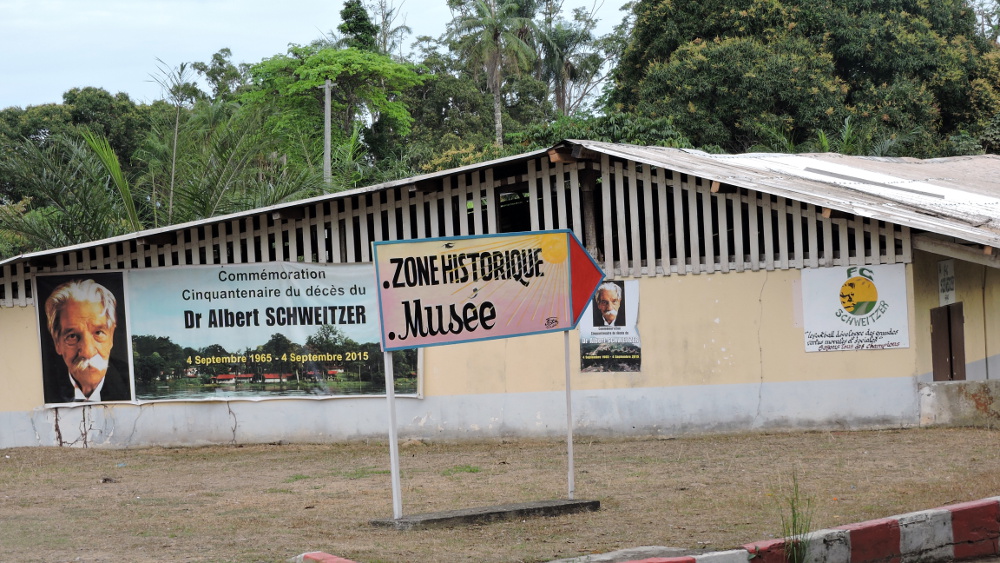 The old Albert-Schweitzer Hospital was a museum. 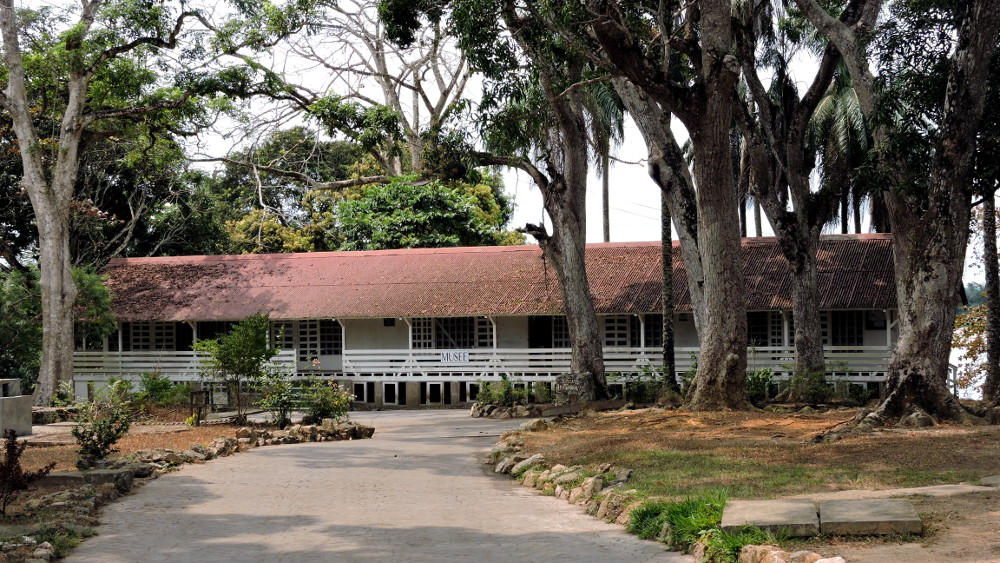 A guided tour of the impressive hospital is well worth it. 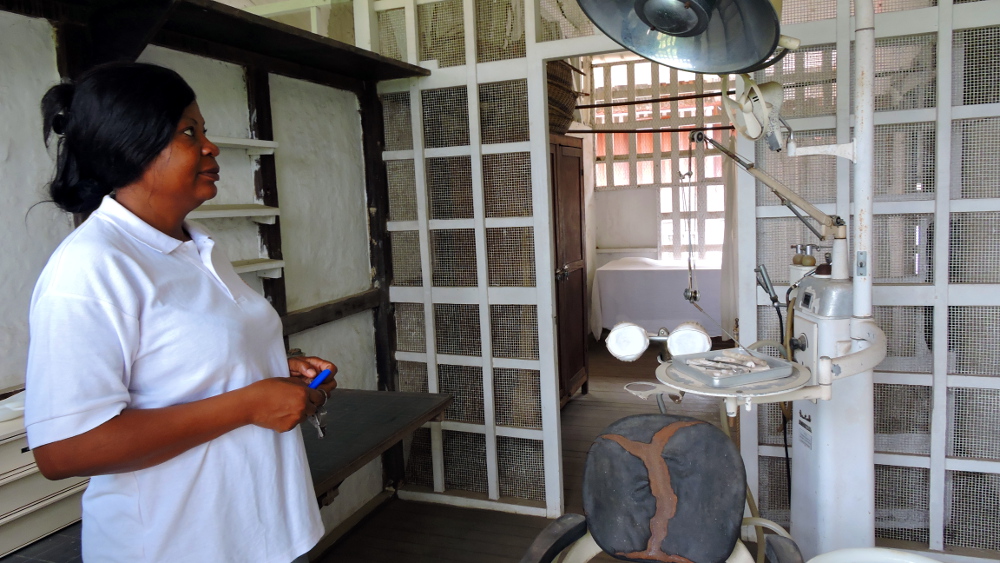 Schweitzer had to prepare some of the medecines himself and had an herb garden.

He had a pelican called Parsifal. 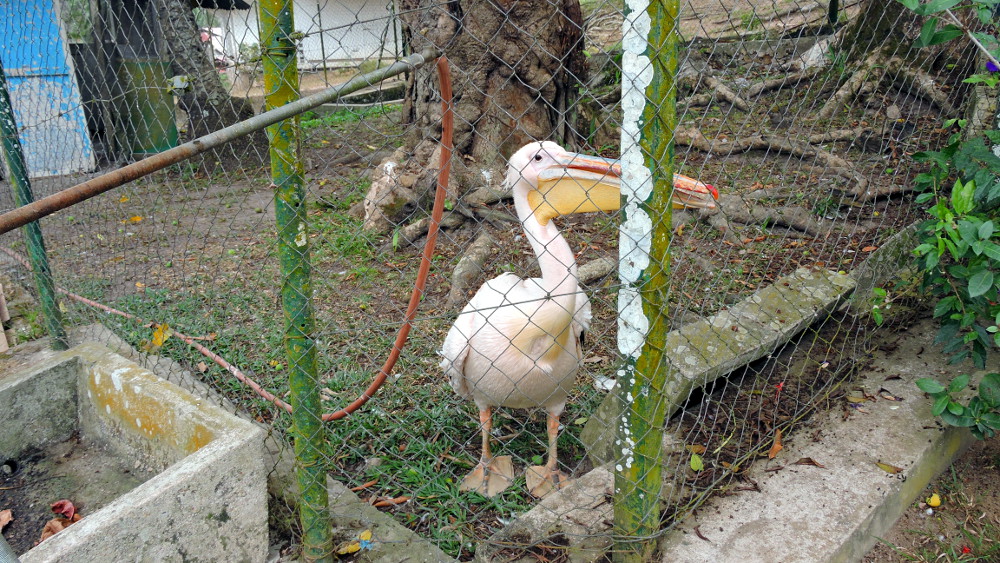 Of course, the pelican is long dead but there is a descendent called Albert.

Lambarene is one of the few larger towns in Gabon. Gabon also uses the CFA and so far I hadn’t needed to find an ATM.

In Lambarene I ran short of money and I became skeptical when I looked for a bank. It took a while but eventually I found one which I hardly recognized as such. It certainly didn’t have an ATM and I was told to try the bank at the post office.

There were more customers. The staff was a bit annoyed when I asked about an ATM. Only Libreville had such a thing. Oops, in a country as rich as Gabon? Some things I just don’t understand. It also wasn’t possible to exchange dollars or Euros.

I was told to try the Lebanese bank and once again I went searching. I found it on the first floor or a multi-story building. First, they said impossible but then a staff exchanged 20 Euros for CFA, probably privately. That money had to last me until the border.

There were few toys and the children were quite inventive. 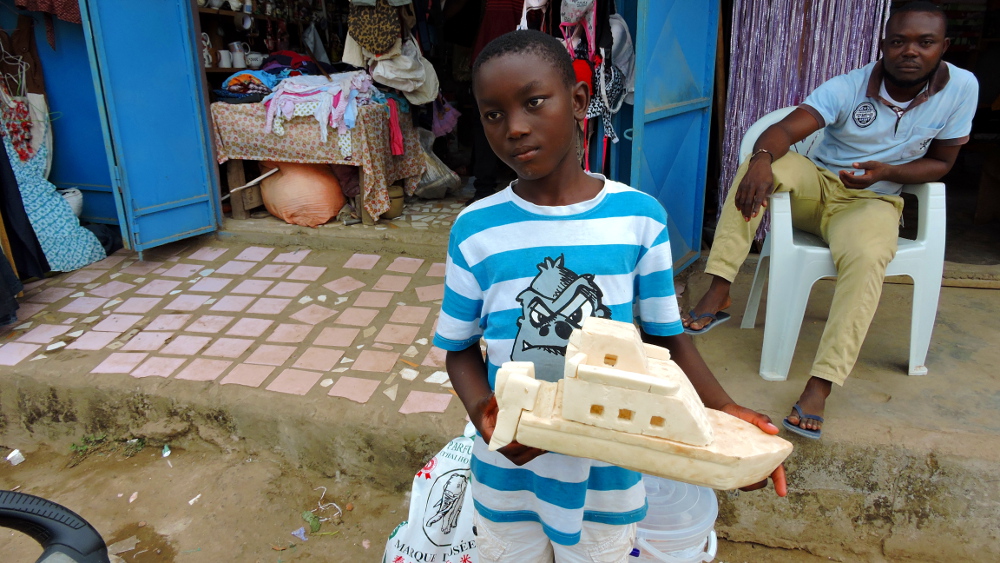 I was really amazed by the boat which was made of styrofoam. Great thing to take garbage from the river and built a boat from it. And it floated.

While I was in Lambarene, I didn’t camp with the chief but with the sisters “Soeurs de Conception Immaculée”. 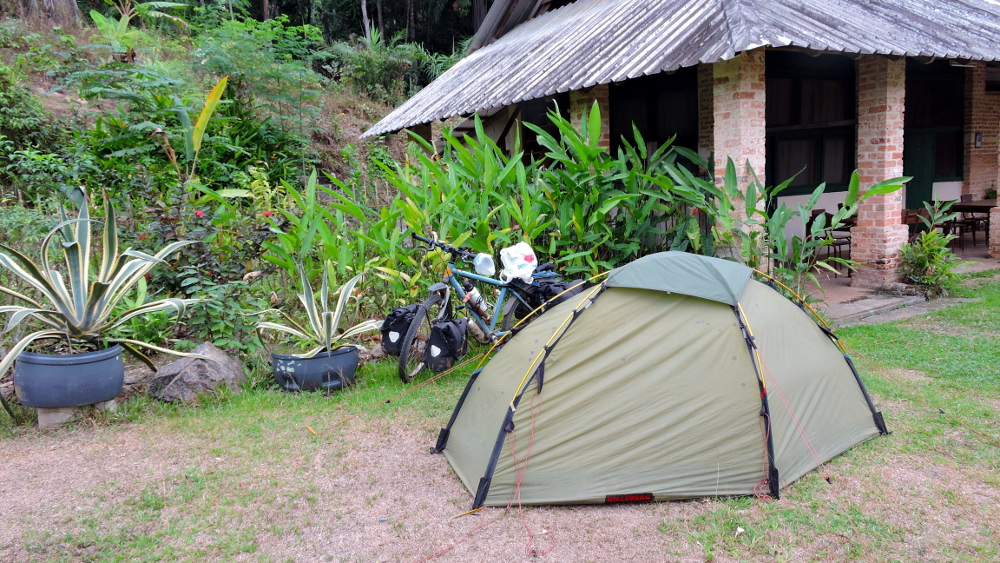 For a little donation I could camp in a beautiful garden. They also rented rooms which were almost all taken. It was shortly before the elections and there were a lot of people around. Not only Ali’s election volunteers but also election monitors of the European Union. An interesting mix! 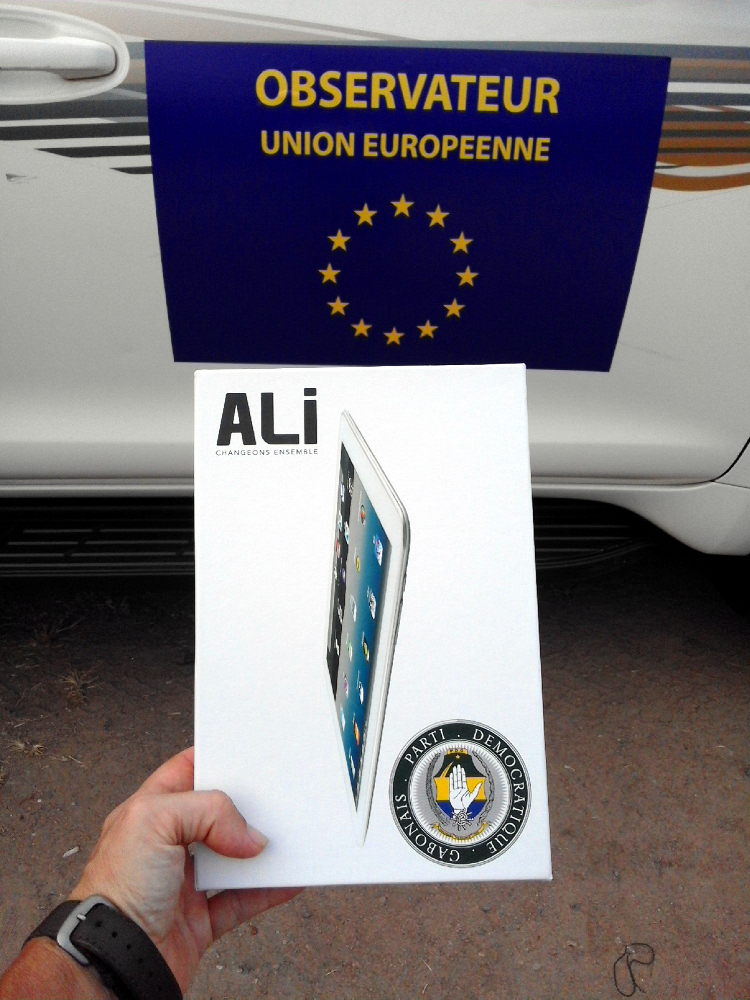 I was quite surprised by the presents Ali handed out, especially because the majority of the population didn’t have water or electricity.

I left Lambarene on Saturday which was election day. The voter turnout must have been very high and I saw a lot of people out and about. At the polling stations where photos of the people who were allowed to vote there. There were long queues outside.

No sign of troubles and I wondered who was supposed to instigate them. 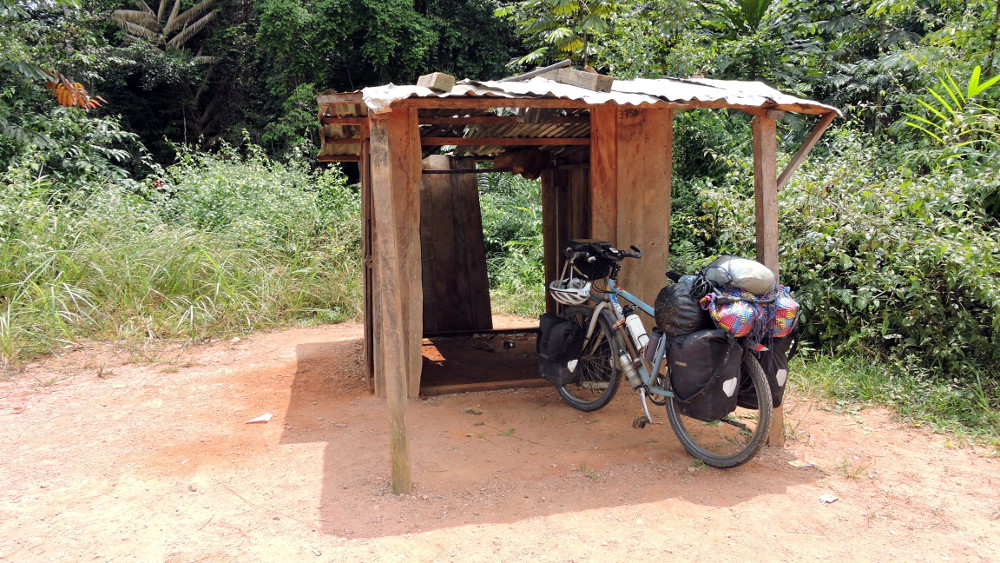 The population density of Gabon was 6.5 person/km2. In Germany it was 230.

In the evening I asked the village chief who would be the winner. It was certain that Ali would win again, he only had had one term. Therefore, they were generous that he should stay on.

Never mind that he had taken over from his stepfather and that if he was reelected, the country would have been ruled by the same family for fifty years.

One evening there wasn’t a village and I had to camp wild. It was incredibly quiet. 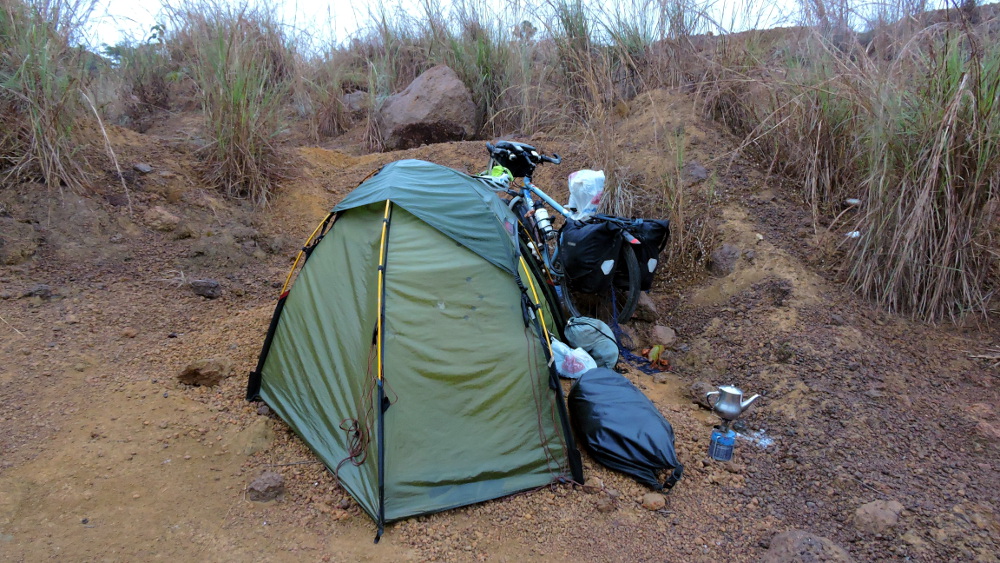 Even so I enjoyed the evenings with the chiefs and learnt a lot, every once in a while, a quiet place in nature was refreshing.

Fortunately, I had been warned beforehand. The last fourty kilometers to the border with Congo Brazzaville weren’t paved. 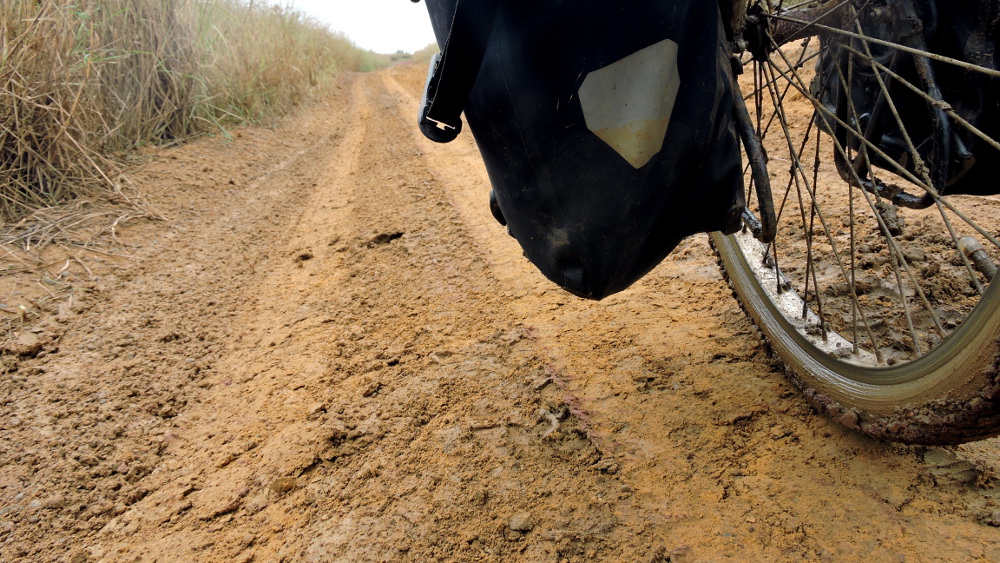 Not a problem in the beginning but then the first rain in a long time started. And that was the end. The mud got stuck between the tire and the mudguard. 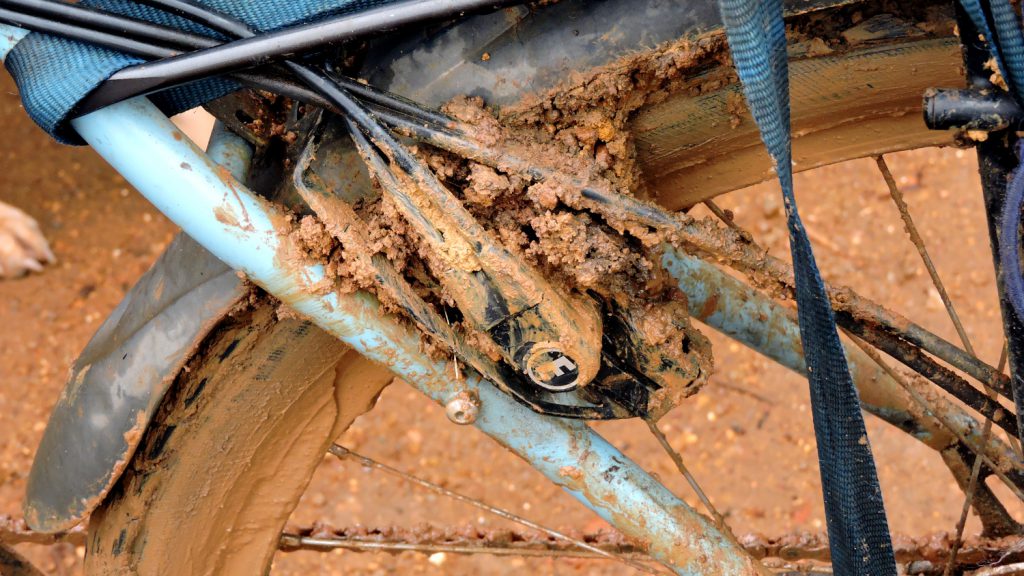 My salvation: a police station ten kilometers before the border. 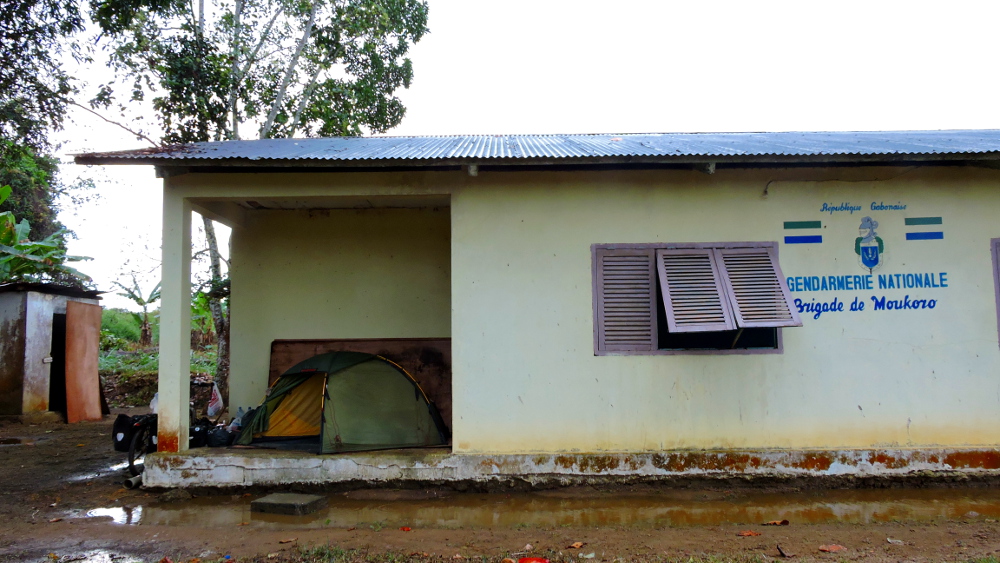 They offered me a dry place to camp and a brush so that I could clean off most of the mud.

But it continued the same way the next day. 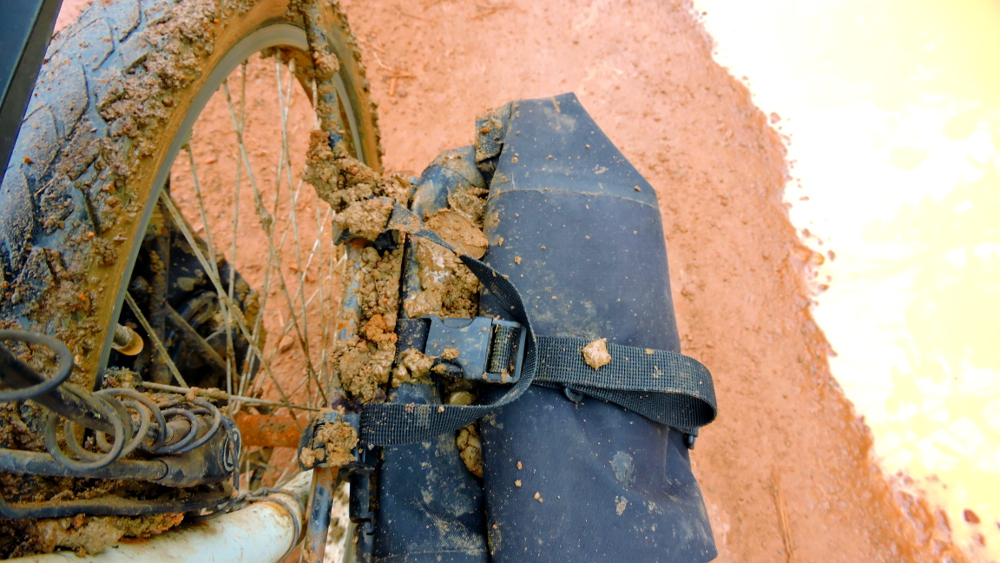 I couldn’t do anything and turned around after 200 meters. I had the bright idea to take off the back mudguard.

After that the mud didn’t have a chance.

I knew that after the border there would be another 200 kilometers of dirt road. I didn’t have any information if it’d be better or worse. It would be a surprise.

It’d take two to three days until the election results were finalized and I reached the border before the winner was announced.

I had spent only eleven days in Gabon and had cycled 876 kilometers. So far, the total mileage was 16,128 km.

More about my journey in the next blog.