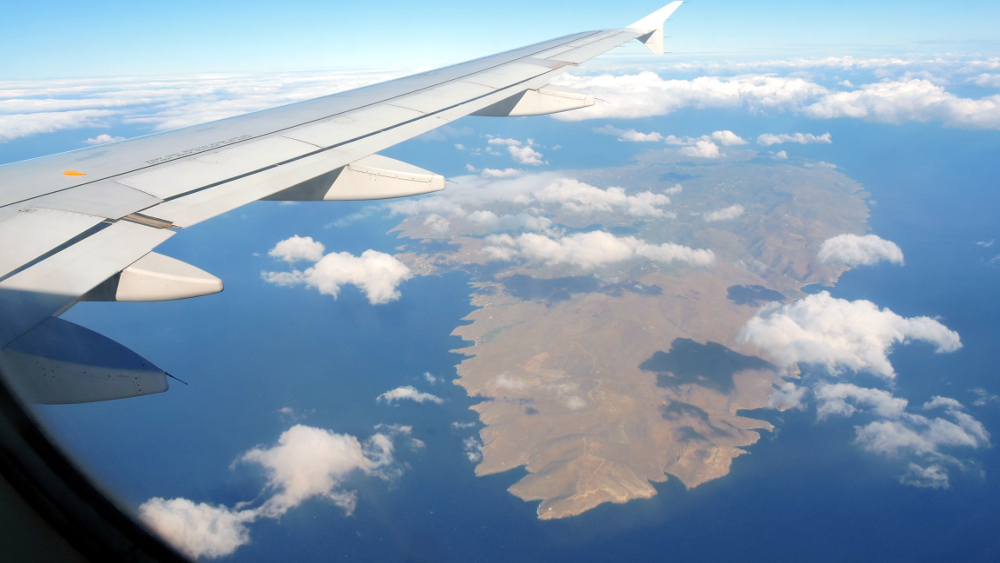 For two years I had cycled the circumference of Africa and now I was back on the European mainland. There had been many challenges in Africa and I had looked forward to Europe. But I soon missed Africa, not only the warm weather, but also its friendly people.

We were delayed on our arrival into Athens on Christmas Eve. What a different world. It was much colder. I wasn’t too thrilled by the snow-covered mountains. 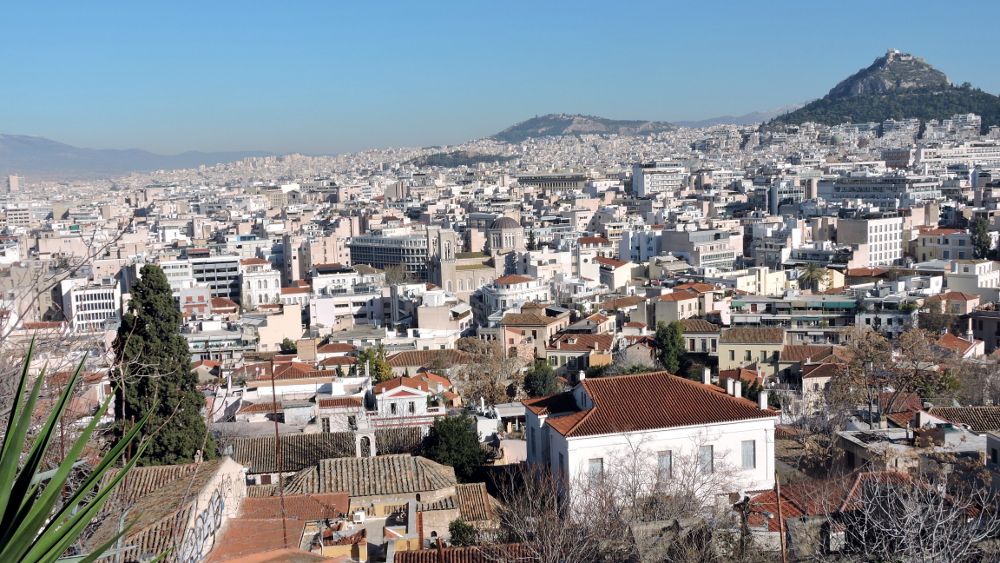 Even so it was Sunday, all the shops were open. The city center was filled with people who marveled at the Christmas decorations. I had a hard time getting through. It was dark by the time I found my accommodation. Most of the shops had closed and I just managed to find the basics for the holidays. 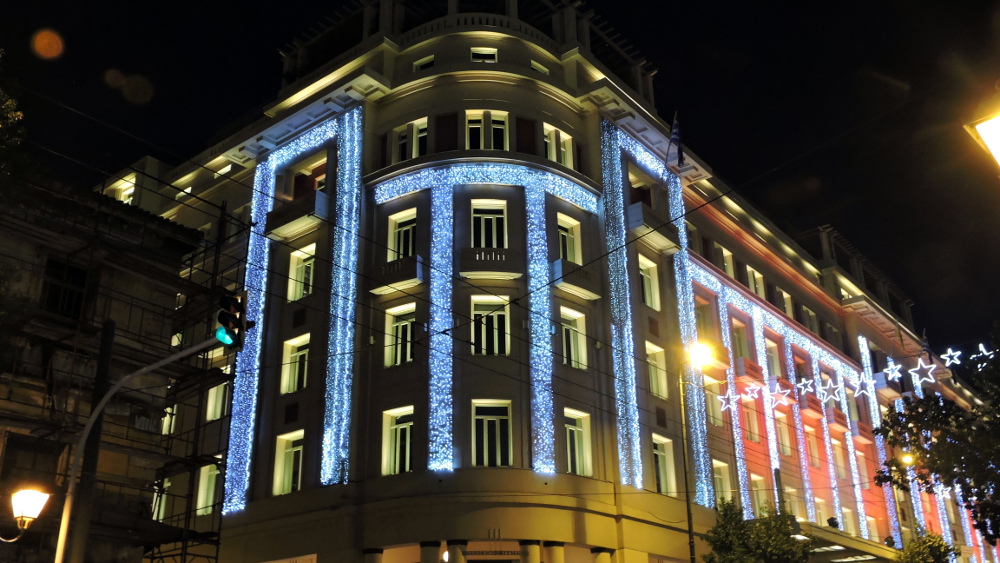 It was special to be in Athens for Christmas. It was very warm during the daytime and in the evenings night came early. Then the Christmas lights came into their own. 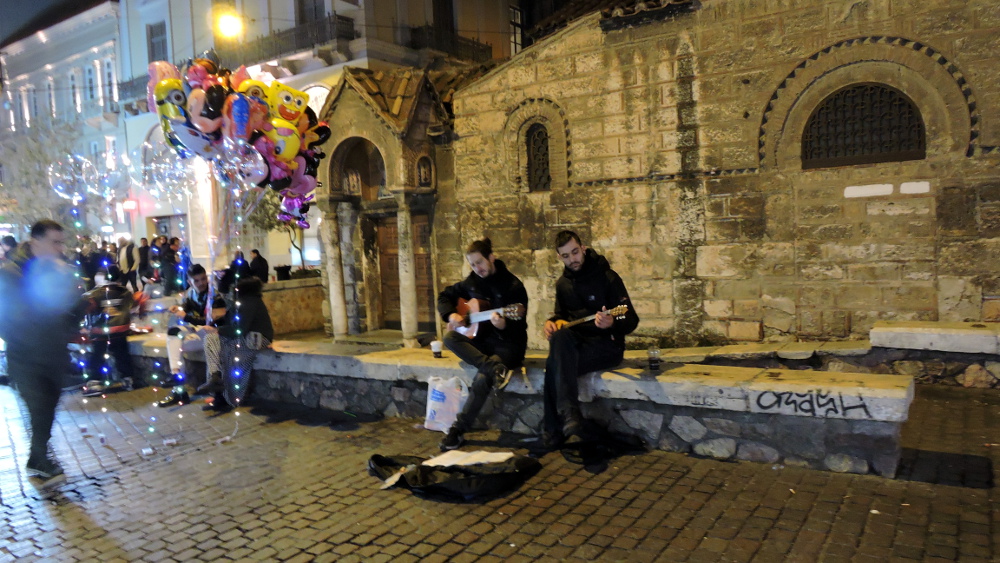 I needed to shop for Rohloff oil and a few other things to get me through to Germany and therefore stayed in the city until after Christmas. 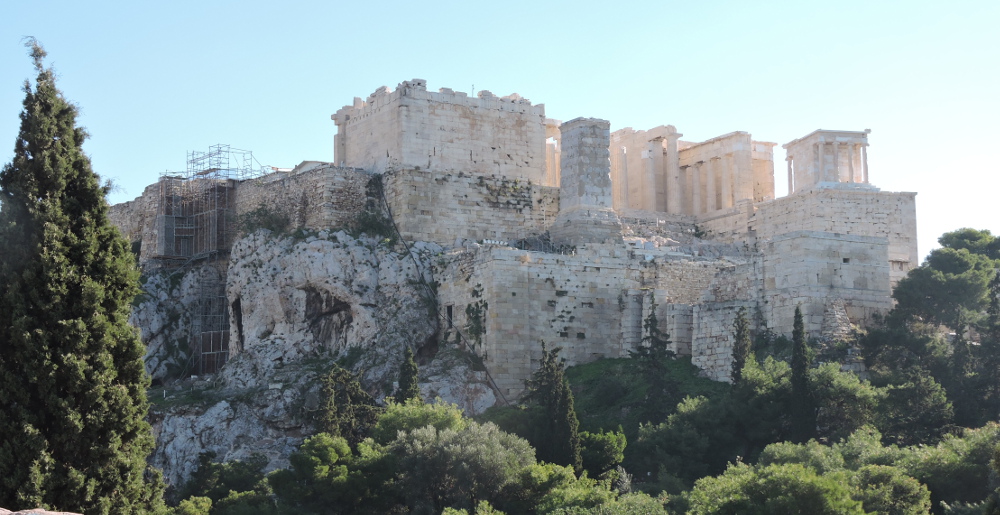 It was surprising that some of the sights, like the Acropolis and museums were closed. After Egypt, the “old” buildings weren’t very exciting because they were very young 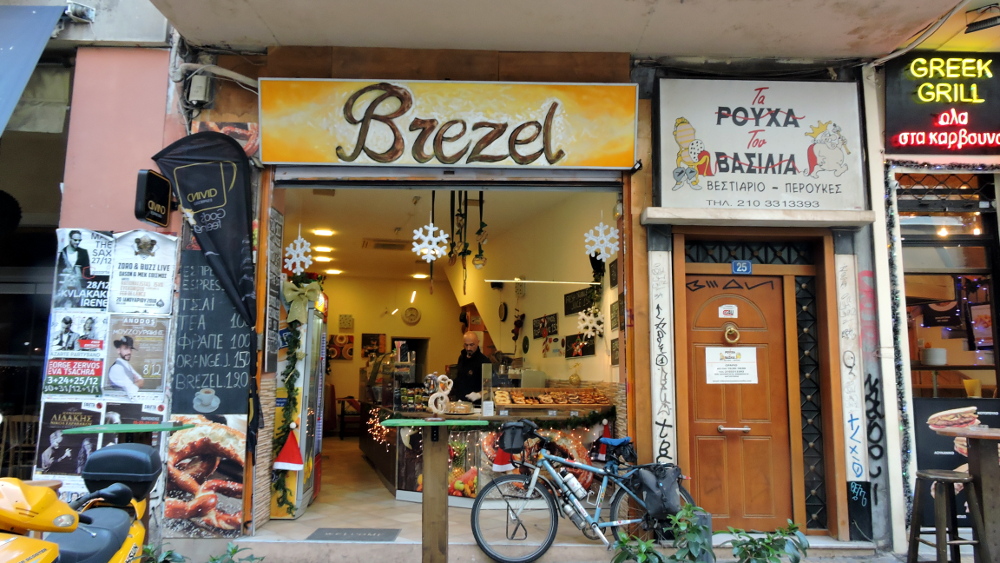 I had rested well, had a bag of food, and the Rohloff hub had been oiled. I was ready to continue. 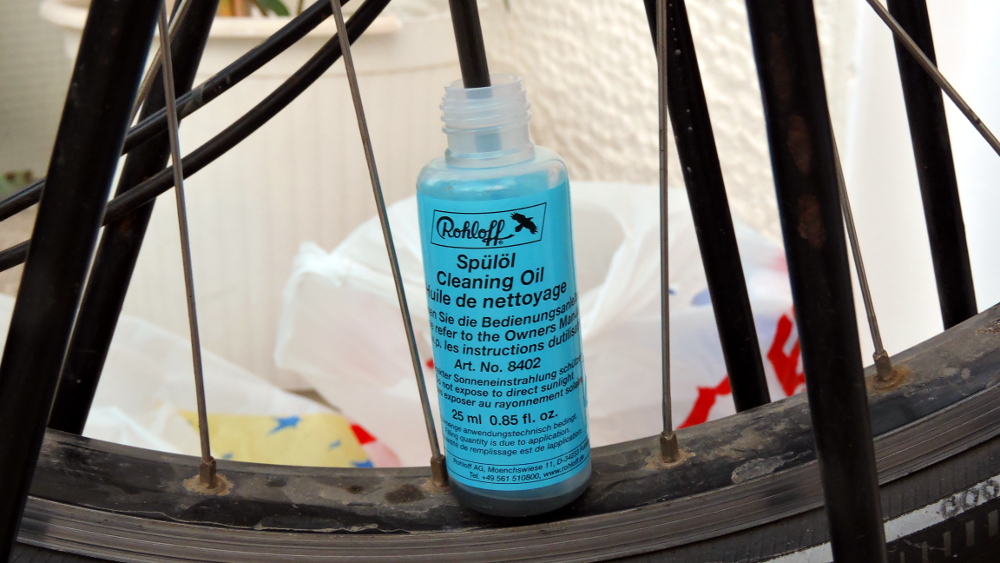 There was a beautiful small coastal road which went past Piraeus and along the cliffs in the direction of Corinthian. In Patras I got on a ferry to cross the golf. 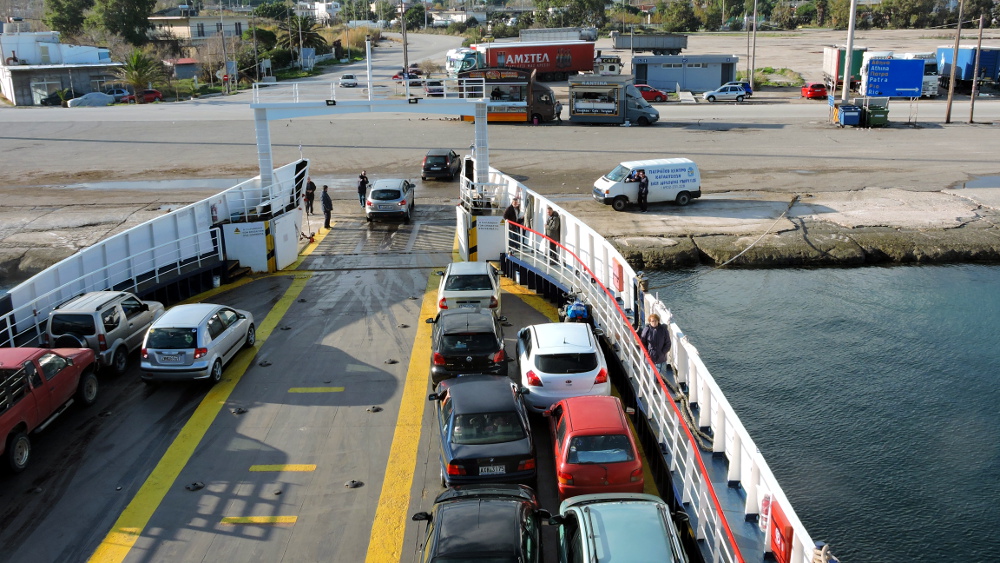 I hadn’t known how pretty and diverse Greece was. I wouldn’t want to be here in summer. But in winter it was very quiet everywhere and the camp grounds were closed. I camped where I wanted to. But it got very cold and often it rained during the night. I was freezing the night of 30th December. I didn’t want to start the New Year like that and stayed at a hotel. 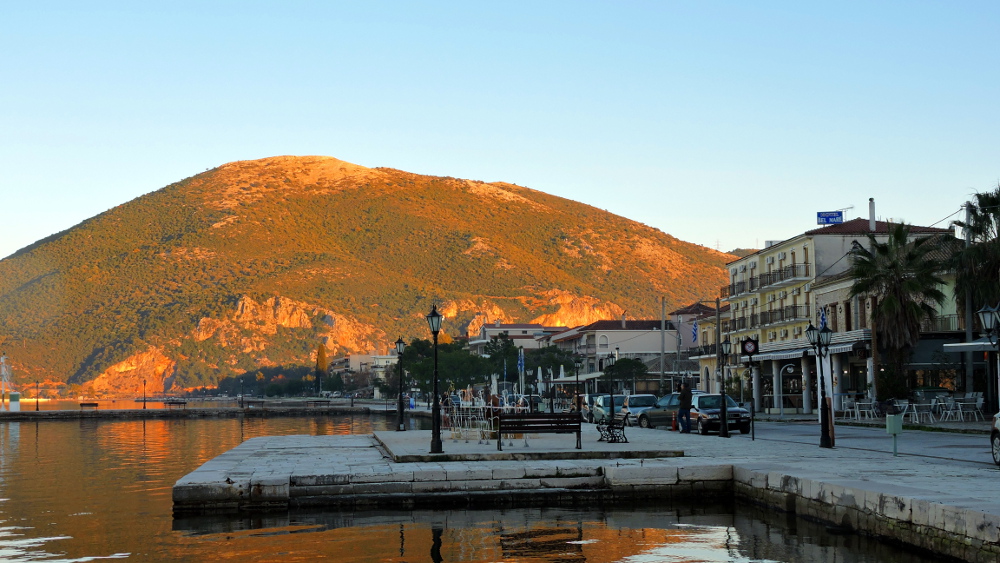 It was very quiet on New Year’s Eve and there were no fireworks on sale. Some Greeks and tourists brought fireworks from Germany.

What a great trip into the New Year! I wanted to take the ferry from Igumenitsa to Italy but it only went two days later. I had a very slow start into the new year.

I had stayed up until midnight but was back on the bike quite early in the morning. Bevor Preveza was a tunnel that went under the water. It was still very early but the woman at the toll station was very awake and very friendly. No, I wouldn’t be allowed to continue. And I didn’t insist. 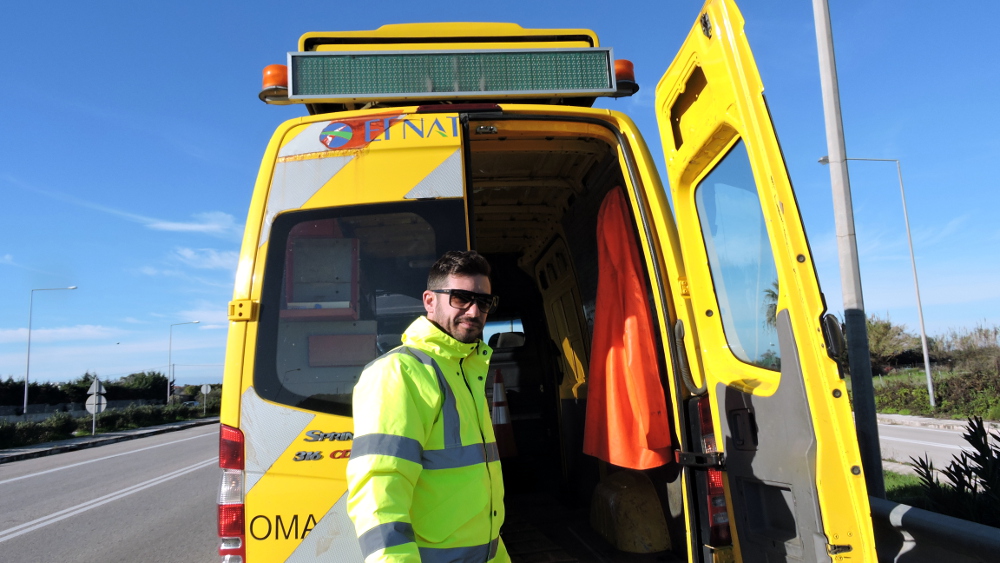 It rained during my last night in Greece but I had a brilliant campsite under a roof on a playground and it didn’t matter. 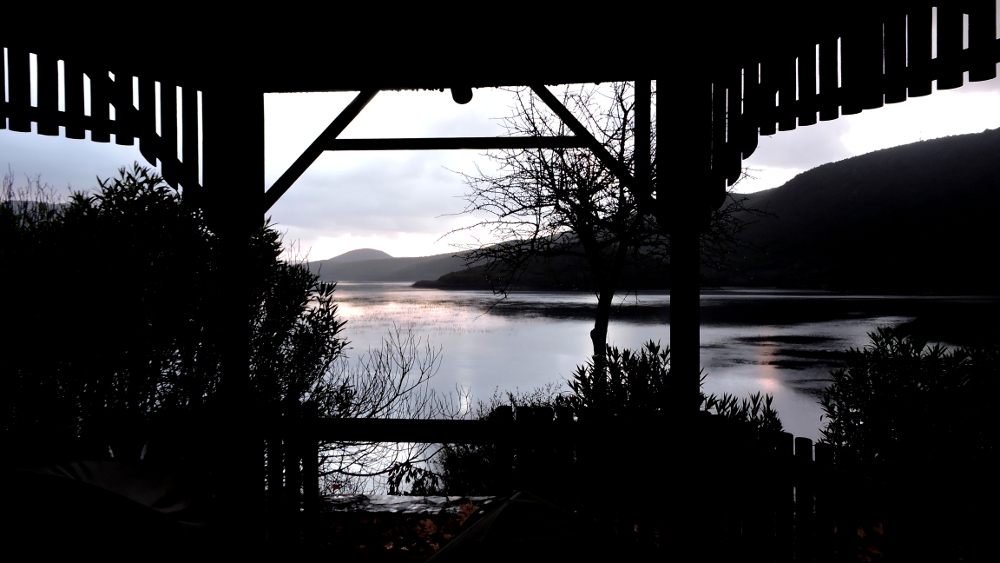 I had reached Igumenitsa around lunch time when a heavy downpour started. It was nice and dry at the harbor and I waited for the ferry which left at midnight for Italy. 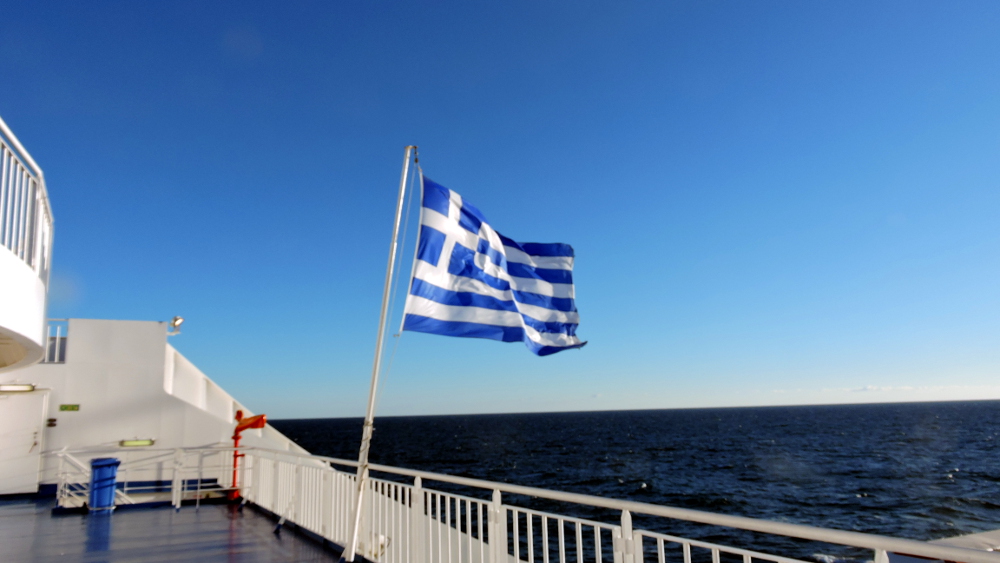 I slept comfortably on the ferry and arrived in Bari in the morning. For a short while I continued along the sea, came through old towns with beautiful squares on the Adriatic, and then turned towards Naples. 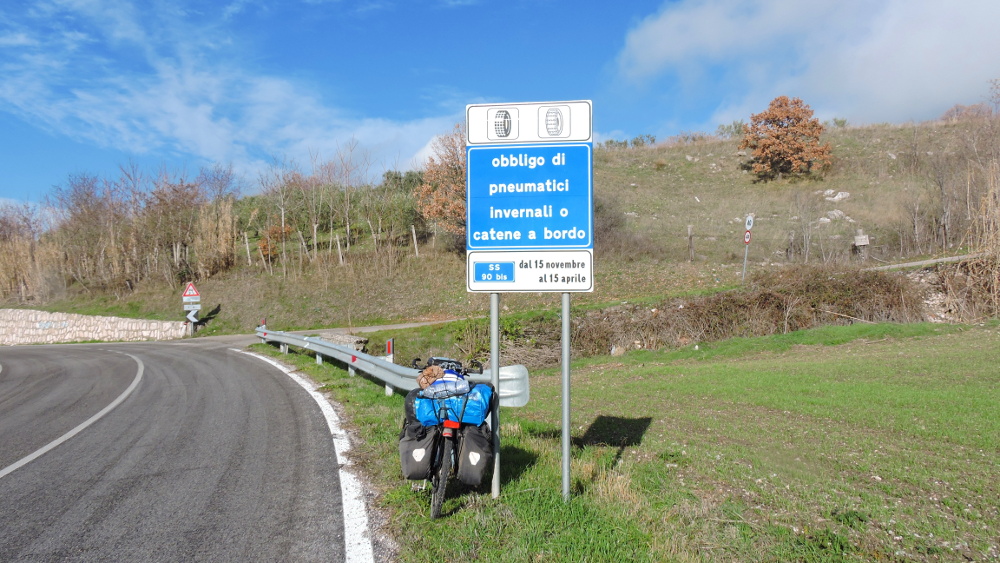 The main reason why I flew to Athens and not directly to Frankfurt was because I wanted to return to Germany slowly. I thought the contrast Africa-Germany would be too big. Greece was also different from Africa but the population density wasn’t as high, there was a lot of nature, and the Greek were very hospitable.

Italy was busier and I came to towns more frequently. Once again there were dogs. There were at least two dogs which barked from every house I passed. And there were headwinds.

Mini and Davido had invited me to stay with them in a small village near Naples. This was the real Italy. I understood very little Italian but the atmosphere swept me away. We ate, drank, sang, and laughed a lot. It was one of those evenings when I wanted to sleep early but I got so carried away that I stayed up long after midnight.

Like many other villages, this one clung to a mountainside. It was so old that its building predated the existence of cars. The alleys were too narrow and had cobblestones. Mobile phones weren’t needed because you could call the neighbor from the balcony. The smell of freshly laundered clothes was everywhere and the trees were full of lemons and oranges. Wonderful! 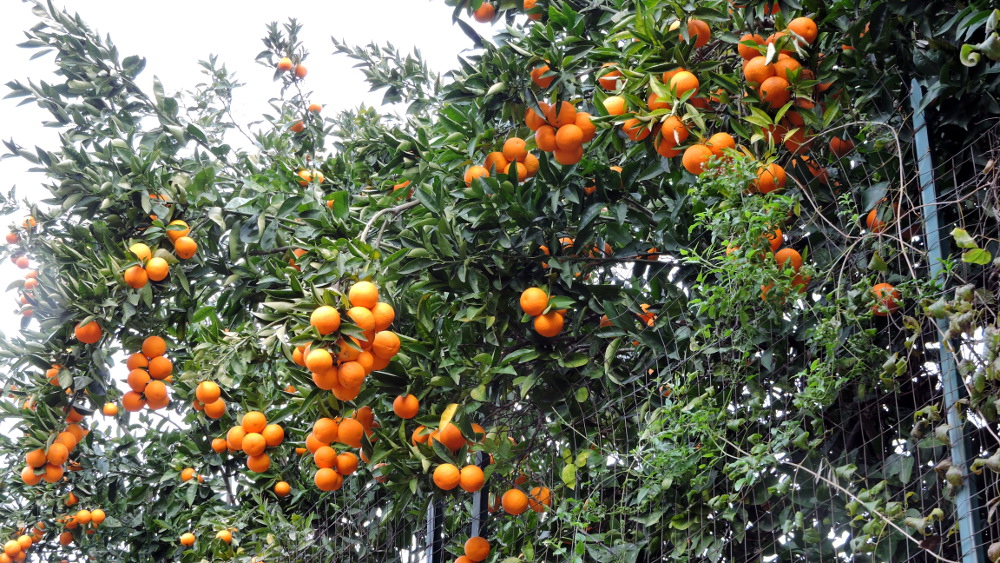 There was a lot of traffic and I cycled around Naples and headed for the coast. I also avoided Rome and rather stayed on the coast where I even found some bike trails.

The campgrounds were closed and stealth camping wasn’t really allowed. Thanks to a local who had lived for many years in Canada and spoke good English,  I found this nice place right by the sea. Eventually the dogs stopped barking. 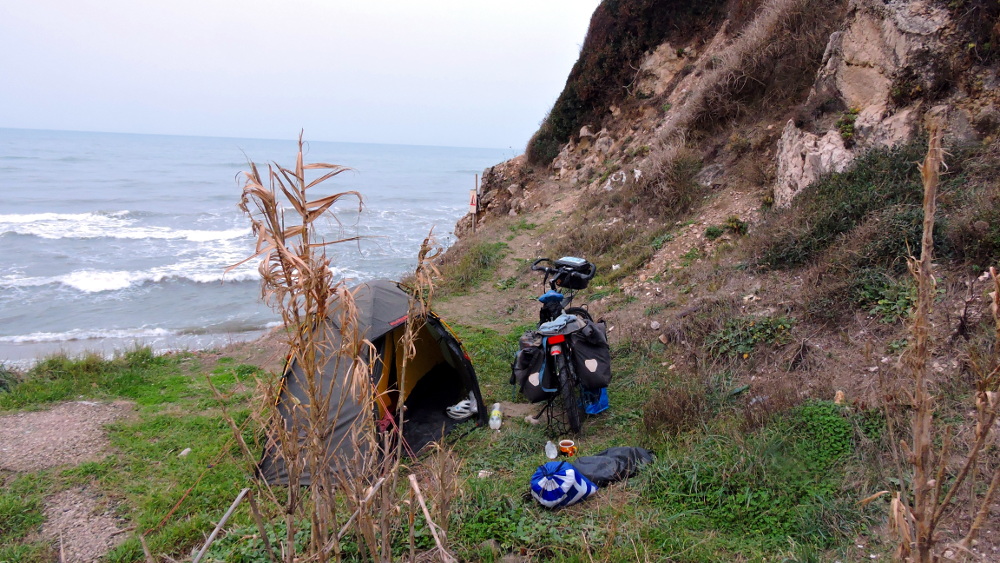 I didn’t want to miss Pisa because I had never seen the Leaning Tower. 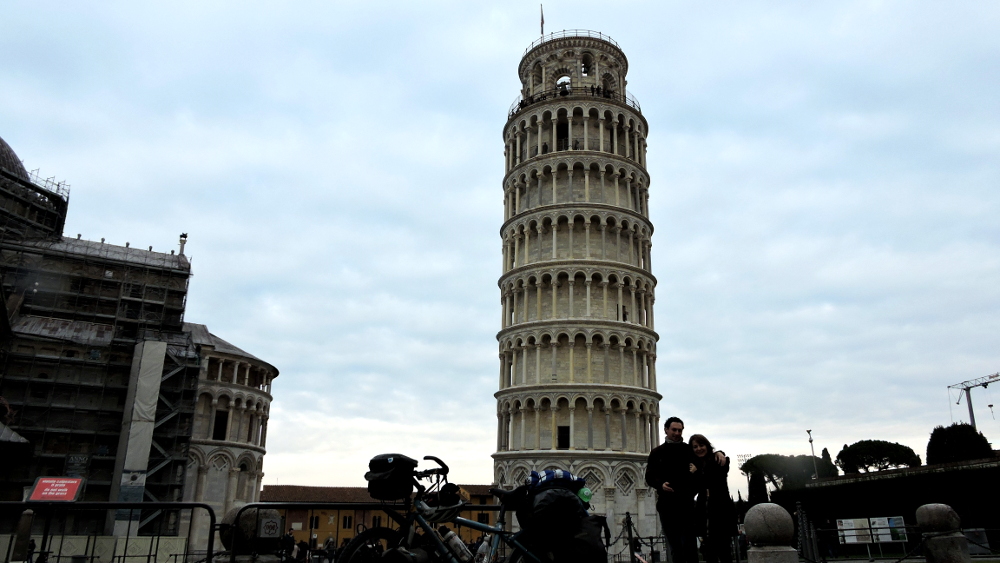 I really enjoyed the city which I explored on a Sunday with great weather. The pedestrian zone downtown was busier than the roads. 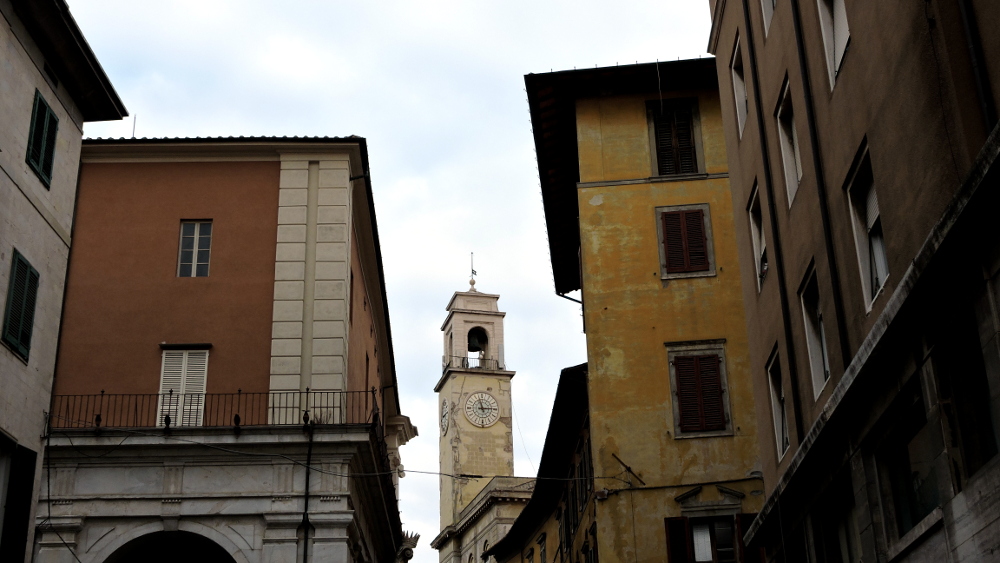 There were hardly any mountains, only the rolling green hills of Tuscany. Then I cycled past Cinque Terre where the sunlit villages were on top of the hills. 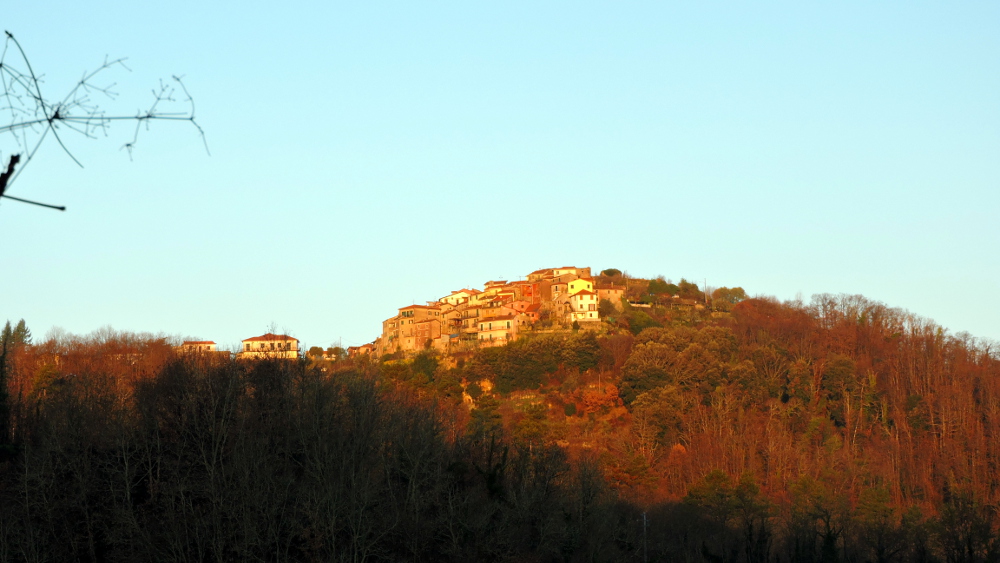 I knew there was a pass ahead but once again had no information where it was and how high it might be. It really didn’t matter.

The scenery was astonishingly beautiful with a great view of the coast. The freeway was either above or below, very often through tunnels. The drivers missed so much! 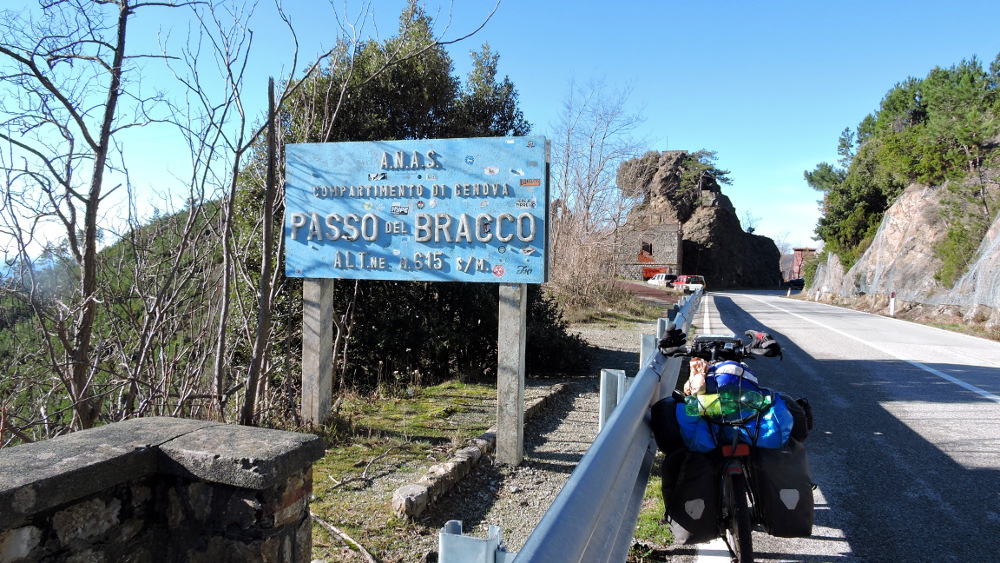 The Ligurian Coast was great preparation for the Côte d’Azur. Very mountainous, wonderful old towns, expensive, and a lot more touristy than bevor. 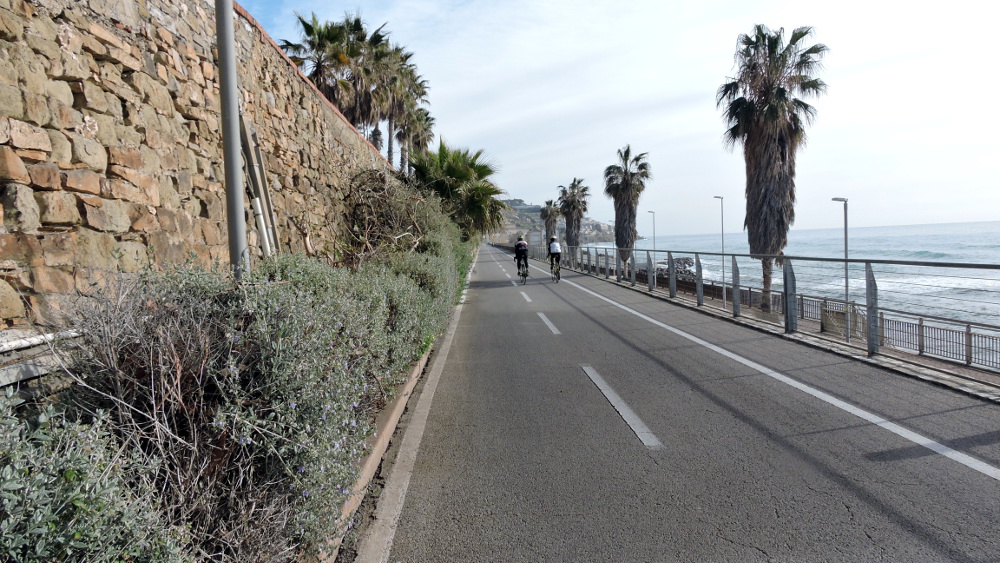 But with the most beautiful bike trails and the longest bike tunnel. 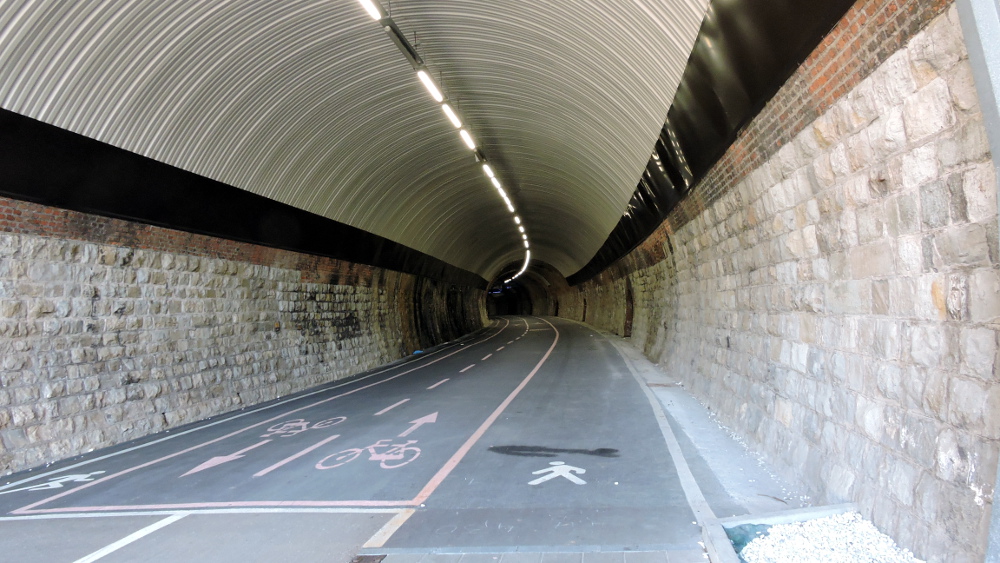 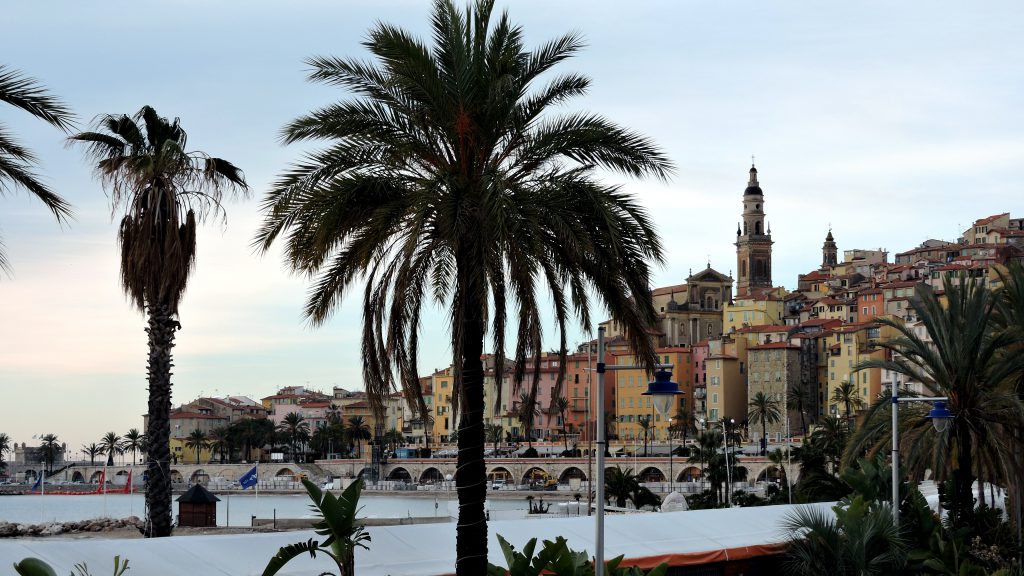 The weather continued to be very nice, above 20C in January. Monaco, Nizza, Cannes – the temperature was so pleasant that I could enjoy it fully. On the weekend there were more cyclists than drivers on the small coastal roads. 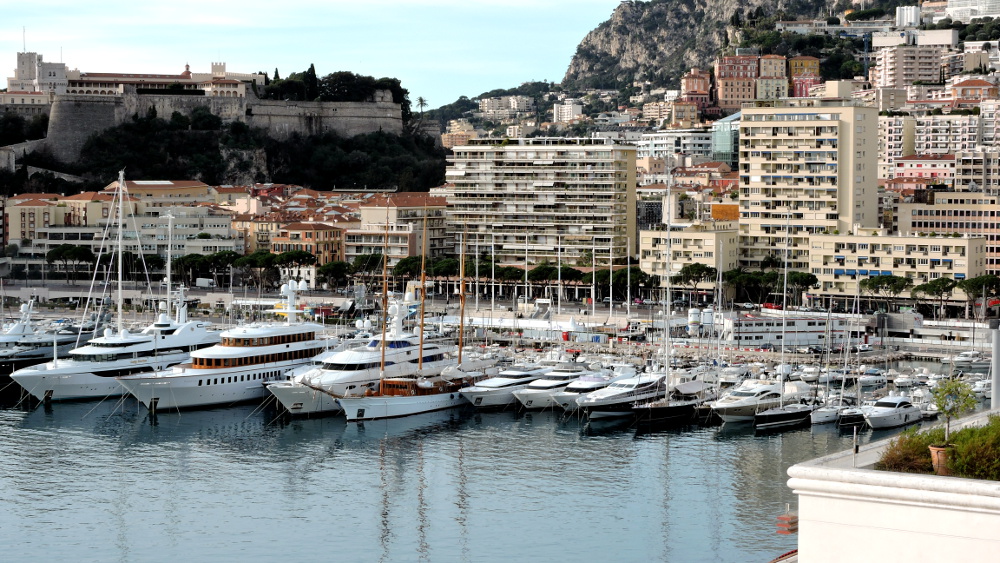 I stayed on the coast until Saint-Raphaël because the weather in the mountains wasn’t good and I expected snow. 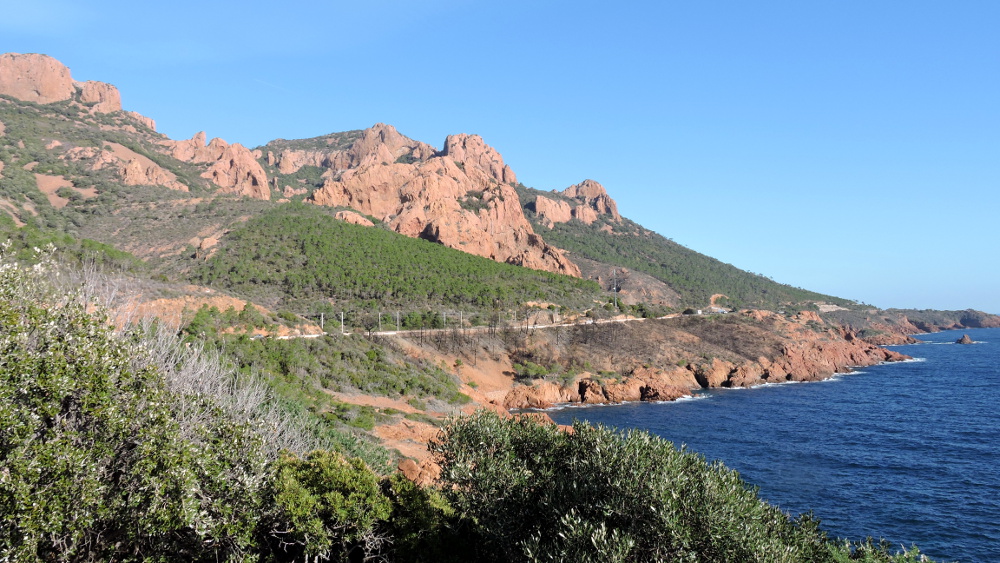 Then I turned towards Aix-en-Provence. It was noticeably colder in the mountains and the mistral, the strong mountain headwind, also picked up. 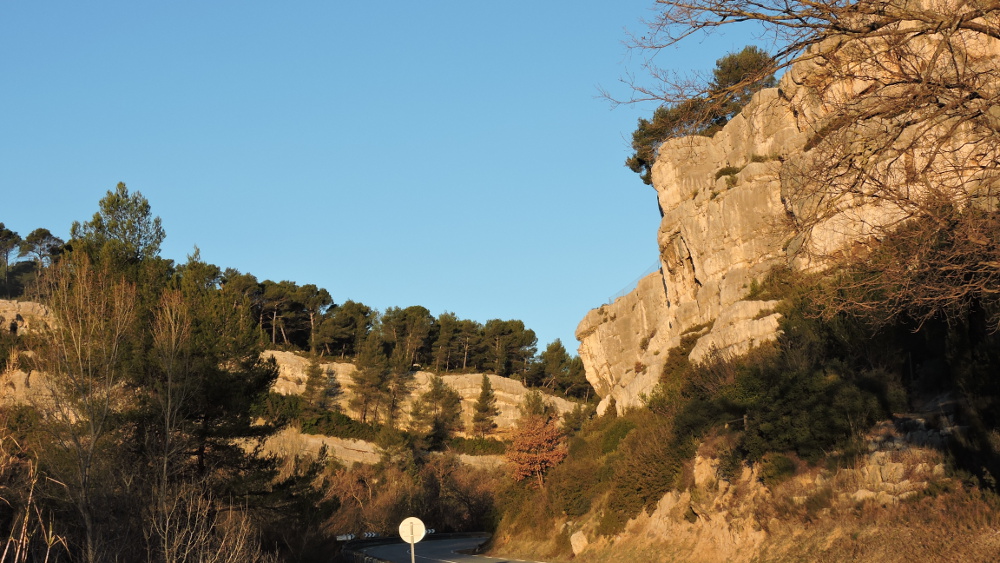 Bevor Aix-en-Provence, the traffic wasn’t too bad. I then enquired at tourist information if there was a bike trail to Avignon. The answer was “Only in our dreams”. There was always room for improvement. I always ask after bike trails and suggest that everyone else should do the same, then it’ll become clear that they’re needed.

I had been to Avignon at the beginning of my tour and the circle was now complete.

The weather got worse and I heard about flooding further north. In Lyon it was clear that the water levels were high and the trail along the Saône was closed. 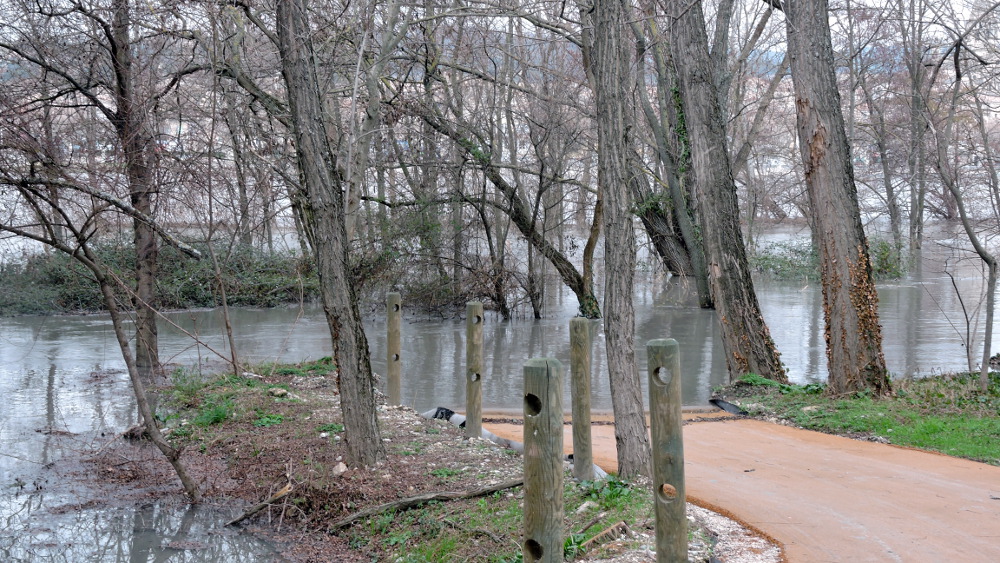 I stopped after Lyon because my motivation to continue was limited. It was so cold and wet that I decided to take the train and hoped the weather would improve later. I had frequently cycled through this area and it wasn’t any longer exciting.

There was no continuing along the Doubs. Cars had to take a detour on the freeway. A nice woman at the tourist information center called around to find alternatives but concluded that I’d need to continue by train.

I cycled to the train station in Beaune and took the train to Mulhouse. Friends there had hosted me on the first night of my tour and I stayed with them again on the last night. 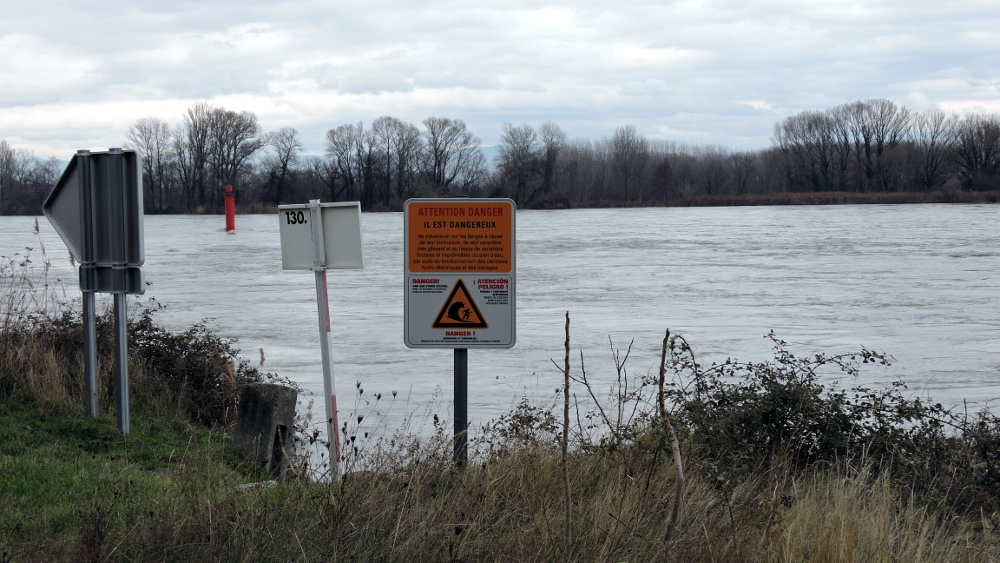 The last stretch in Germany was again great. Fortunately, the Rhine hadn’t flooded its banks. 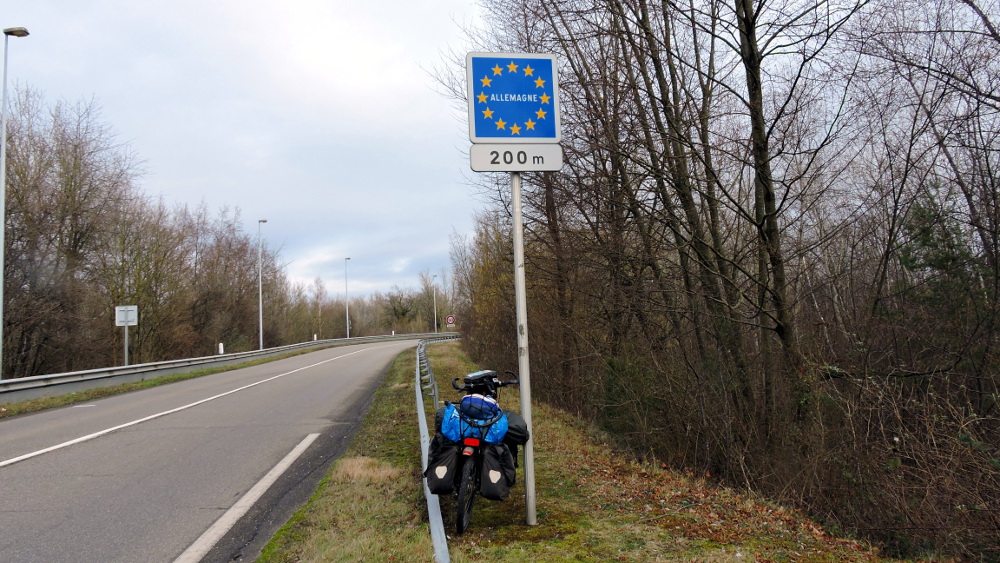 After two years, one months, and two weeks, I once again reached the house of my sister in Lahr. 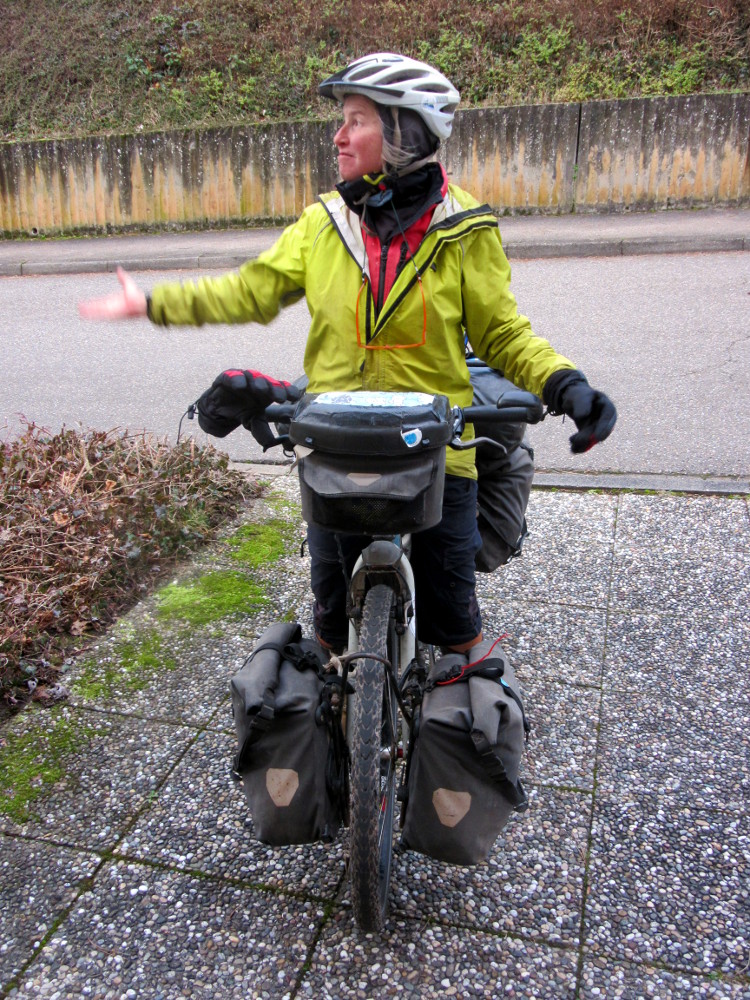