Startseite » Africa tour in English » Egypt: Along the Nile

Egypt: Along the Nile

Of temples and graves

There were several attacks in Egypt in recent years and the number of tourists continued to decline. The last thing Egypt could afford now would be another attack because tourism was one of the most important areas of the economy. For that reason, in most areas of the country, foreign cyclists got a mandatory police escort. Read on for all the stories.

I slept very well on the ferry from Wadi Halfa, Sudan to Aswan. Thanks to the muezzin, I woke up early and enjoyed the sunrise over the mountains of Egypt. 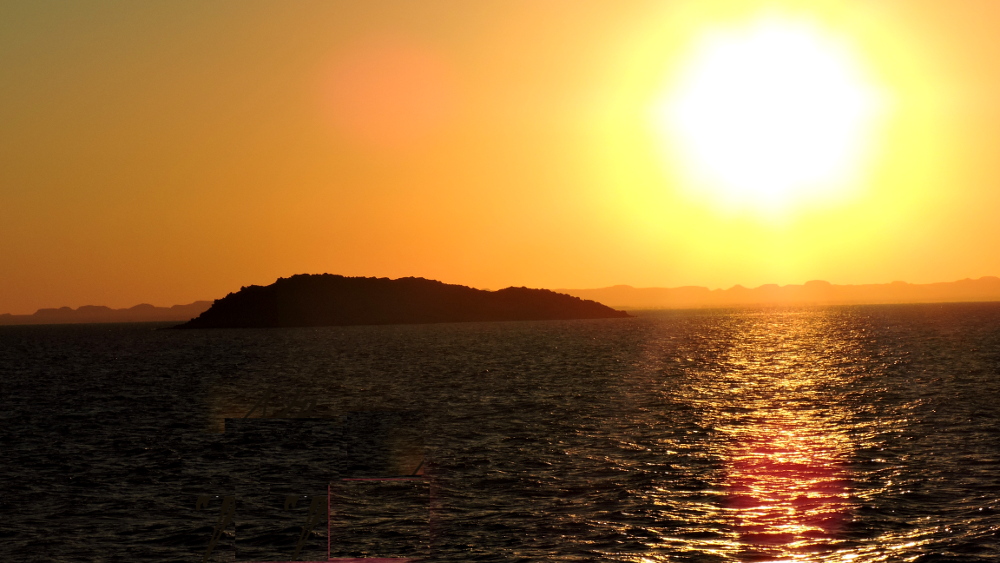 Unfortunately, we had passed Abu Simbel during the night.

It was still very quiet. A passenger who took the ferry regularly, told me that in the past the ship was often completely sold out with 600 travelers. I estimated that we were 200. No wonder that I managed to get a cabin easily.

Around lunch time we arrived at the port of Aswan. Immigration was very easy except that they wanted to search my luggage.

Immediately I was thronged by porters and taxi drivers. The first told me it was 30 kilometers to the city, the second one claimed 25. I hadn’t thought that it’d be that much further. But no doubt, I’d cover the distance by bike.

I got my first impression of Aswan. I never thought that the city was so big. 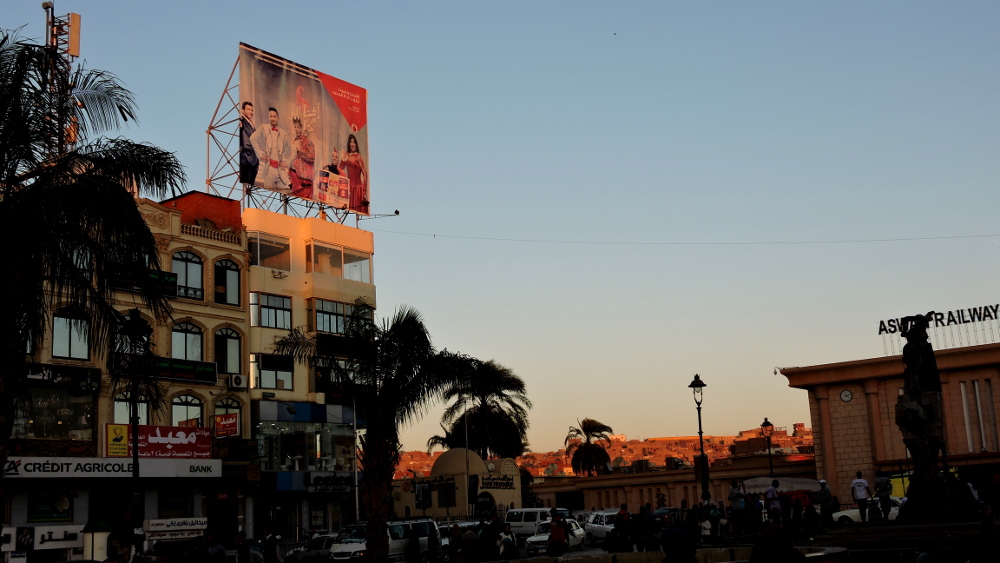 It was a real shock after the desert of Sudan and the small sleepy town of Wadi Halfa. 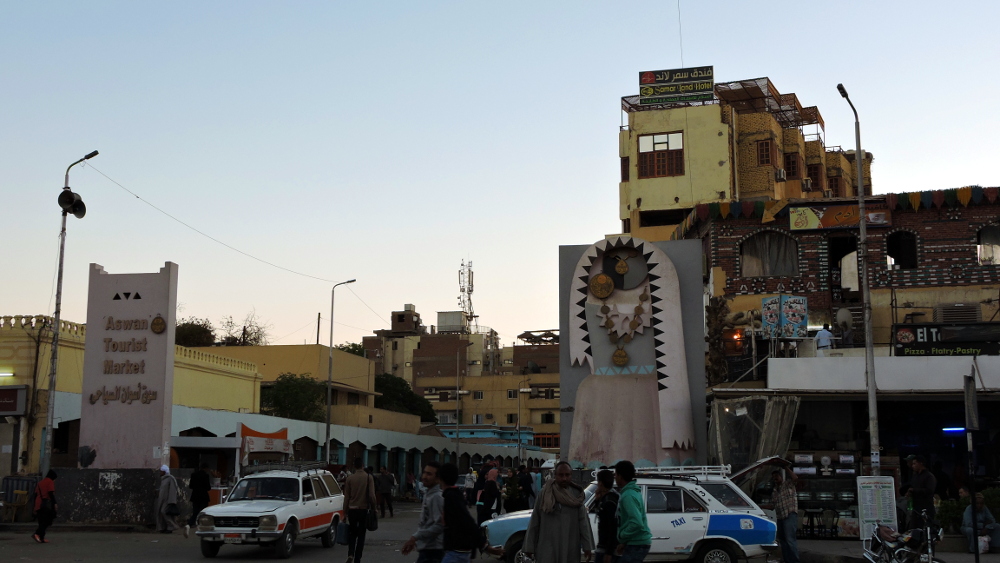 And all the things to eat that were on offer: fruits, veggies, falafel, French fries, and of course sweets. Very dangerous!

My hotel was in the center of town, not far from the Nile. 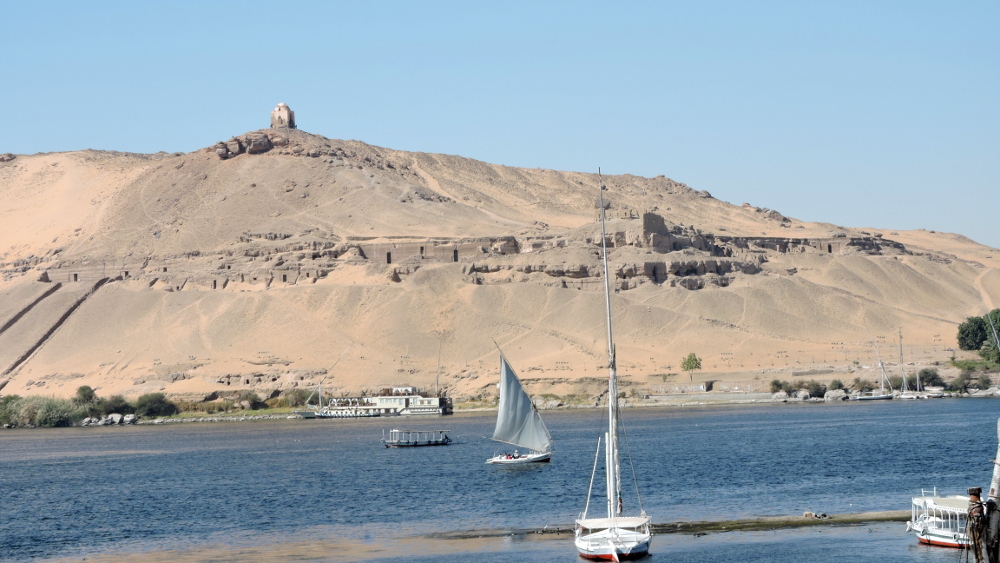 When I walked through the souk, the market, the traders immediately spoke German to me. Oh my, I wasn’t used to it any longer. “only looking, only looking”.

The temple was moved to the island of Agilkia in 1980. The island of Philae was submerged when the Aswan Dam was built. For that reason, the temple which was built 400 years BC still looked remarkably fresh. 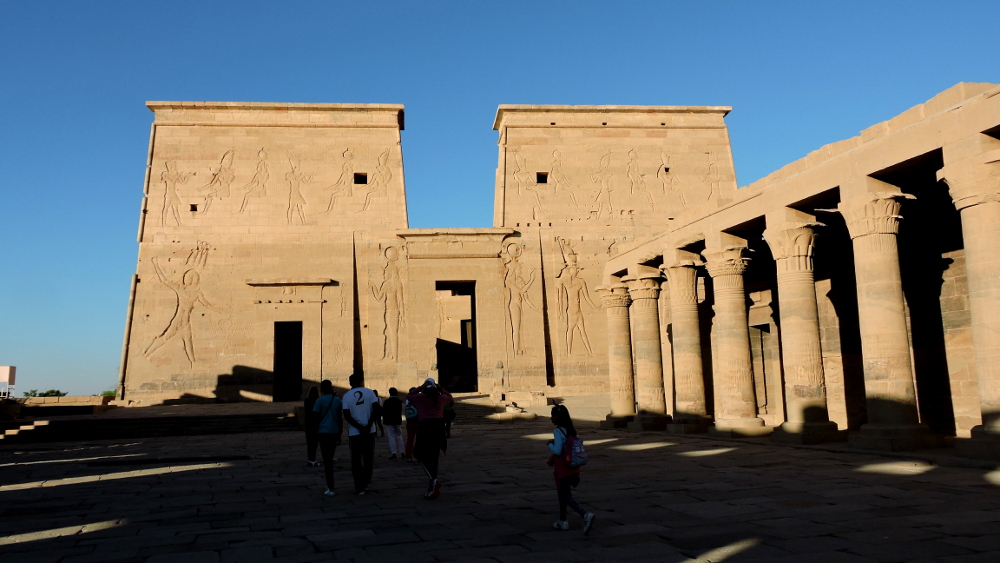 Even so I didn’t understand the meaning of the hieroglyphs, I still enjoyed it tremendously to walk through the halls and to marvel at them. 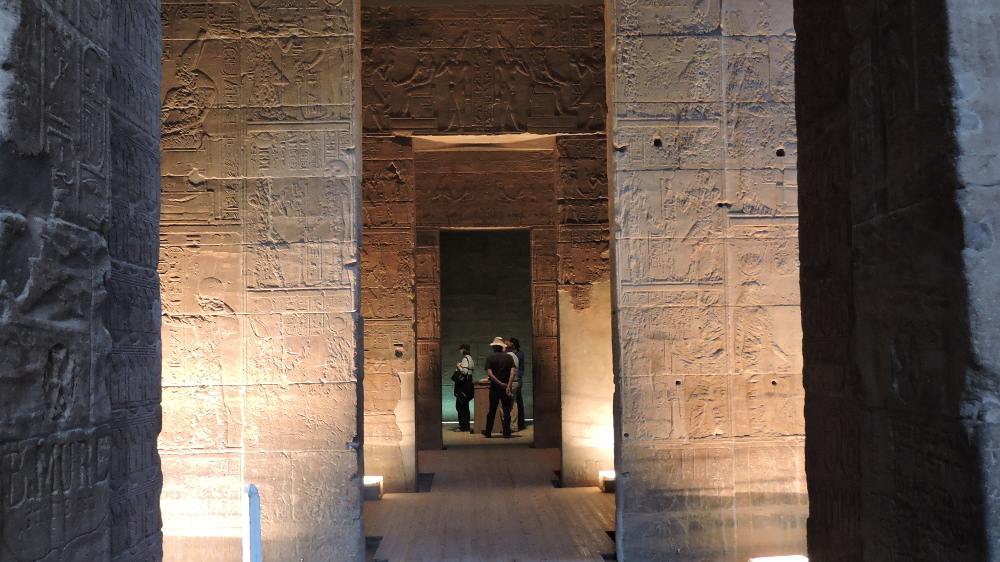 I had to join a tour group to get on the ferry to and from the island.

The light in the late afternoon was incredible. 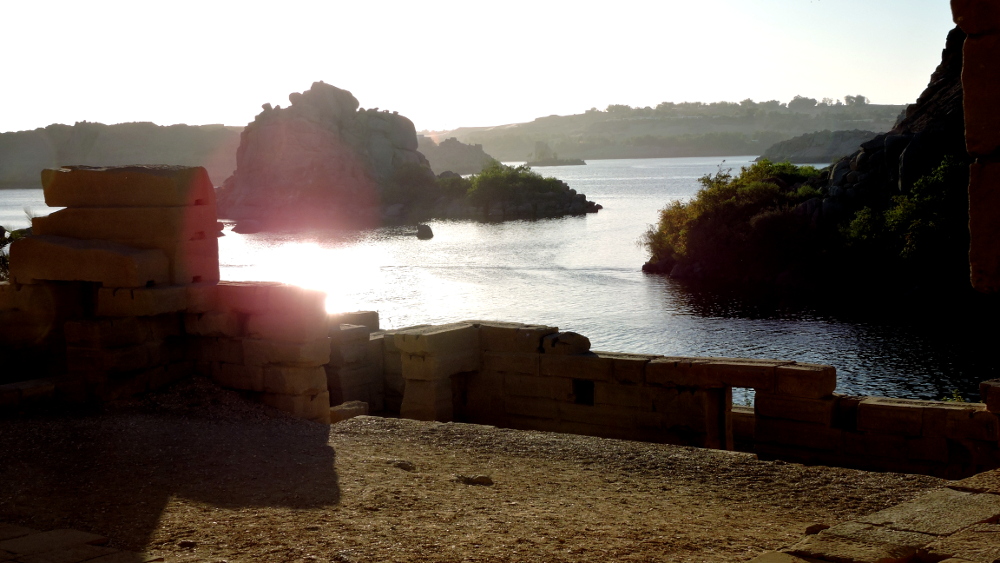 It was close to 5 pm and it started to get dark when I finally was back at my bike. I hurried to cycle back and it was easy. As dusk was settling, I reached the city.

And then? I was stuck in a traffic jam! There was a procession. Colorfully decorated horse drawn carriages blocked the road. Vuvuzelas were used to make a hell of a lot of noise. Eventually, I discovered the reason: it was the birthday of the Prophet Mohammed.

The culinary temptations were too big and I needed to leave Aswan as quickly as possible.

I already knew that I’d get a police escort for much of the way. For the first 50 kilometers I was still on my own. I stopped at a street café where they discovered me. Let the games begin.

The first escort was very nice. They waited patiently until I had finished my tea. I got the impression that they didn’t want to intrude and were almost invisible before or behind me. Occasionally they’d come up to me and asked questions. When they heard how old I was, they went ahead.

My “freedom” didn’t last long. At the next police stop, the teams switched. They tried to convince me that it’d be a lot faster, if they put my bike in the car and I rode with them. I really didn’t want that. They stopped frequently to find out if I had changed my mind.

It was only when I told them straight out that I’d cycle until 4 pm that they stopped asking.

Forget about stealth camping. The police made sure that I slept at a hotel. I joined them in the car for the last kilometers to Edfu.

Before I continued my tour the next day, I visited the temple of Edfu, one of the best-preserved temple compounds. It was built in the fourth century BC and was dedicated to the God Horus.

Even so it was still very early, there were already a lot of tourists. Excavations were ongoing. Once again, I had a great time meandering through the columned halls. 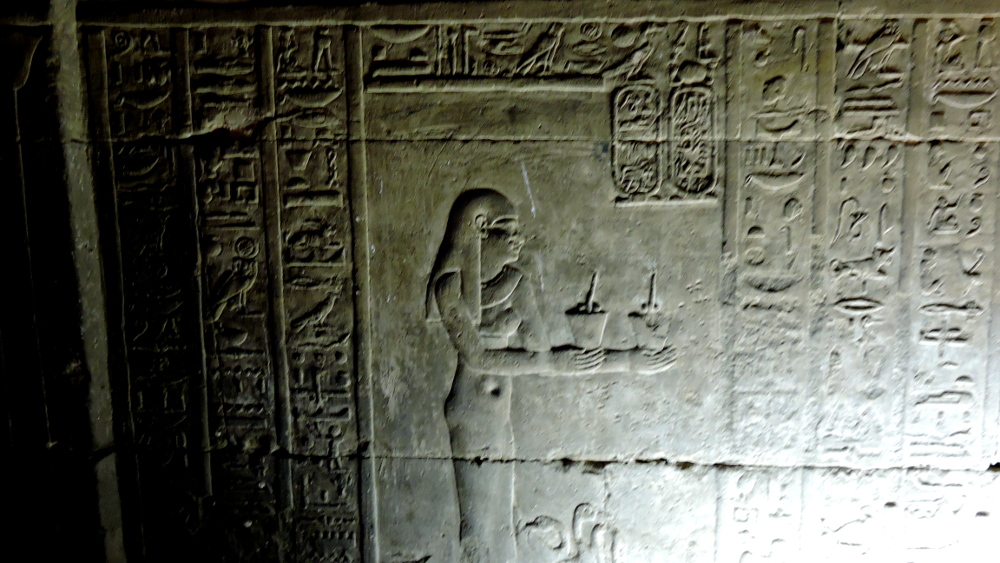 I’d have been interested to know the story behind this relief. Surely the God didn’t offer ice cream as a sacrifice.

The temple was on the west side of the Nile and I stayed there. It was a small farm road, well paved, which weaved along canals through small villages and fields. 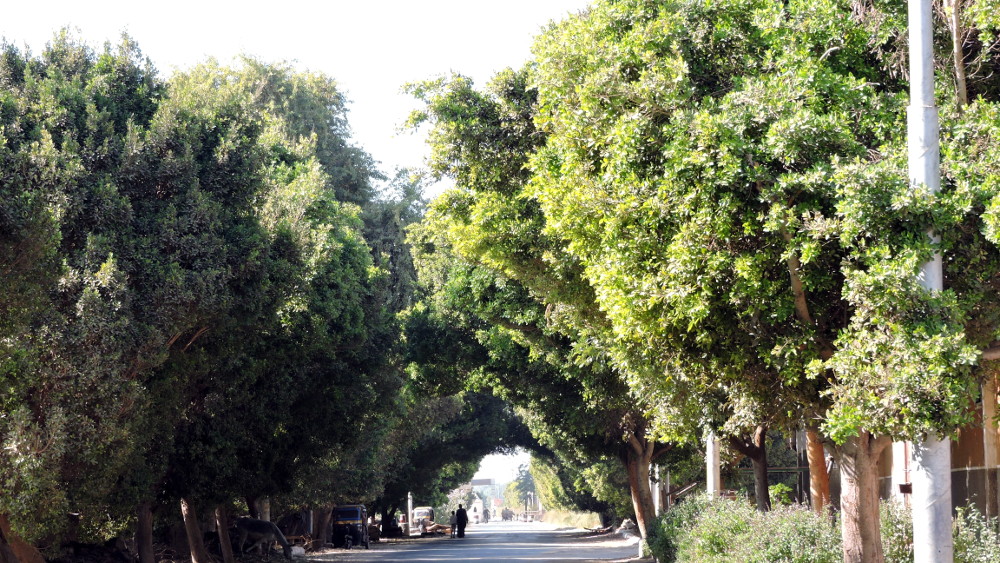 Since Sudan I had seen water in big clay barrels but I never tried it. 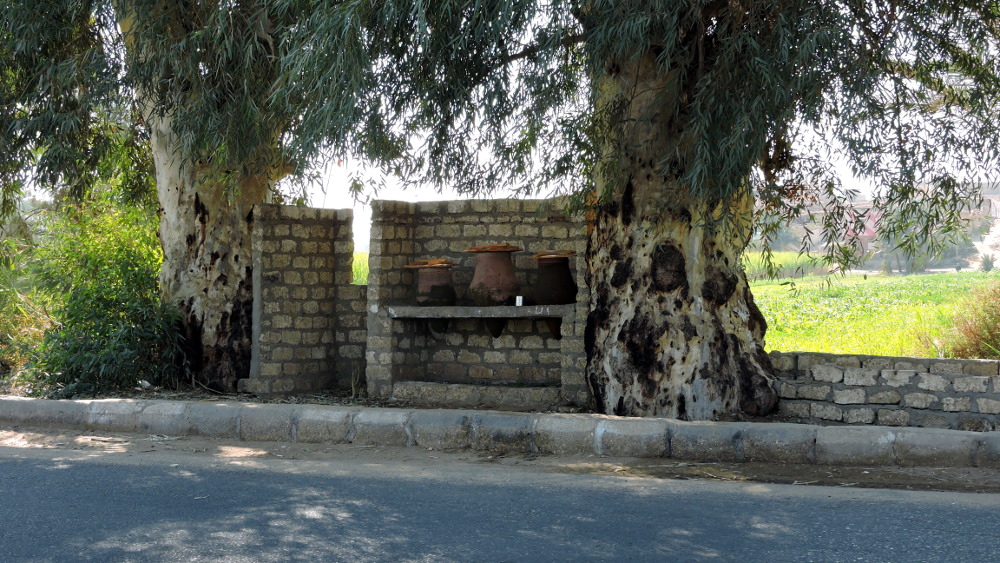 I was without police escort but frequently moped and tuk-tuk drivers cut in front of me and barred the way. Maybe an escort was better because then there was no harassment.

The next temple was in Esna. First, I asked the police if there was a hotel and they all affirmed. Then I was back in police custody and was escorted to the temple of Chums. It was very small and was buried nine meters below ground. 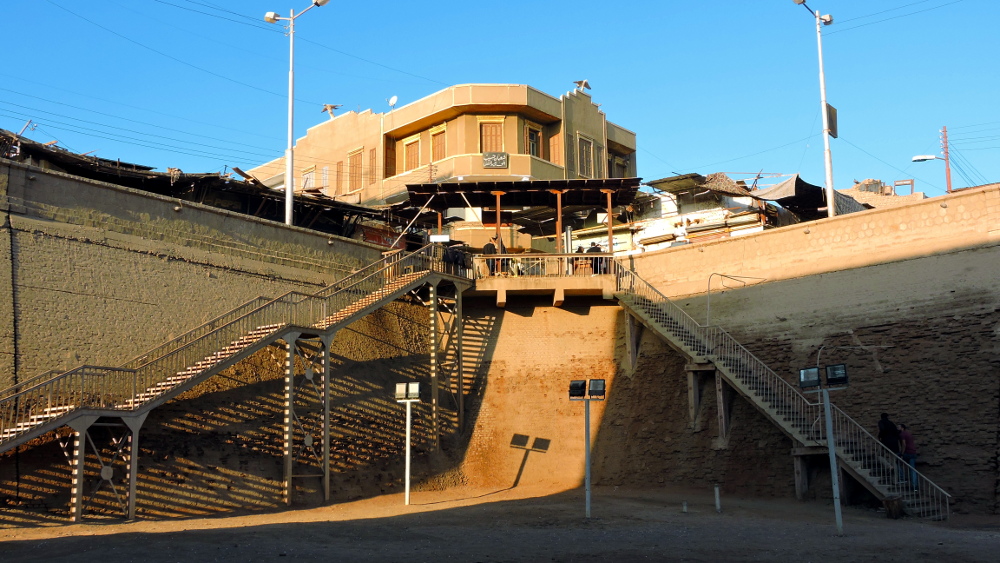 It was very quiet.

I wasn’t allowed to walk back to the police station where I had left my bike. I had to wait for a police man. He first escorted me to the police station and then to the alleged hotel. It was a large building with a “hotel” sign but apparently it wasn’t a hotel. Now what? Make phone calls. I didn’t understand a word and simply followed the police man who didn’t speak English.

It was a large and rather nice city but it had seen better days. The beautiful old houses stood empty and became derelict.

We ended up at the tourism police, my escort handed me over and vanished.

Again, the question: now what? The next hotel was in Luxor, 30-40 kilometers away. It was late and I couldn’t and wouldn’t cycle there. Fortunately, they didn’t have a large car to drive me and my bike.

Eventually the very young head of the tourism police arrived and he spoke amazing English. They quickly cleaned up an office where I could spend the night. Everyone was very nice, I was invited to dinner, and the boss thought of himself as my son and would do anything for me. Sometimes it’s nice to be older. 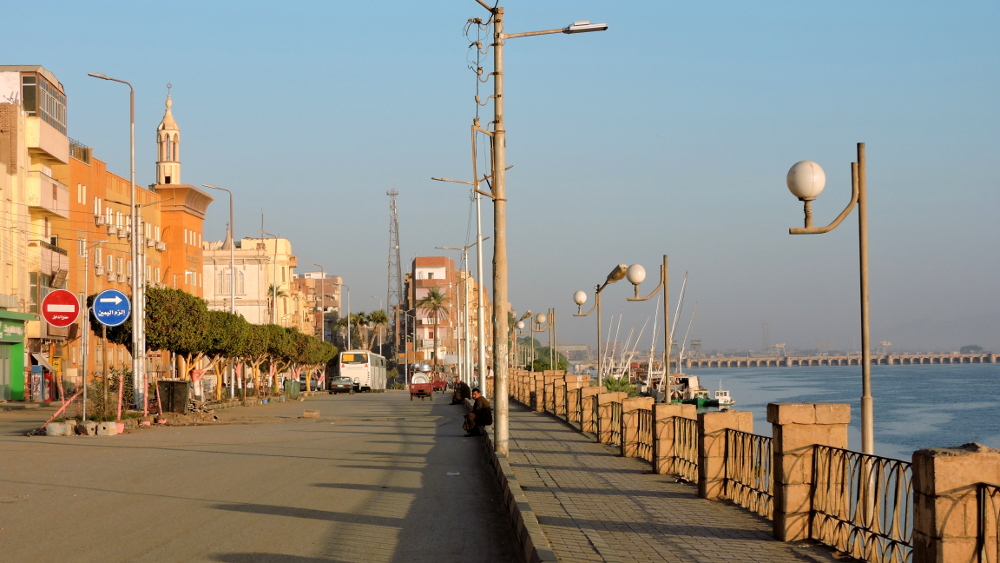 My “son” was still asleep when I left the police station. The route to leave the city was incredibly beautiful.

I couldn’t understand why such a nice place with a temple didn’t have a hotel.

After the town I went to the other side of the Nile and was immediately welcomed by the police.

In the beginning I didn’t mind because it was only about 60 kilometers to Luxor.

When we arrived at the last police checkpoint which was ten kilometers before the city, I thought they would let me carry on alone. No chance and I had to wait 30 minutes until the next escort was ready.

I’d have reached my hotel much faster without them. They stopped all the time and asked for directions even so I had shown them the way on the map. I didn’t mind when I lost them in the hustle and shortly afterwards arrived in the Hotel Oasis. 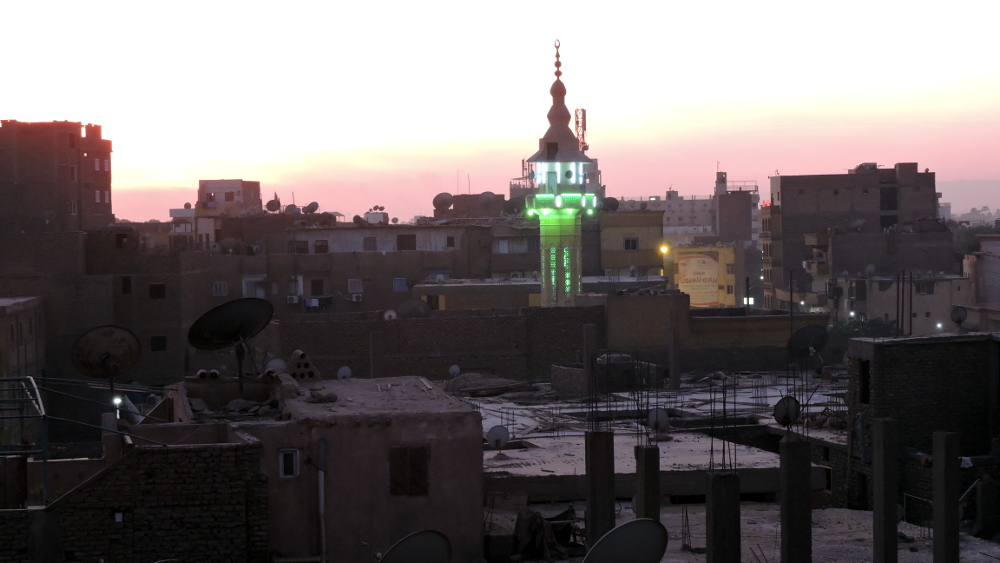 First, I wanted to explore the town without racing from one attraction to the next. I found the souk and heard from all sides: “Just look, just look. Very good price…”. 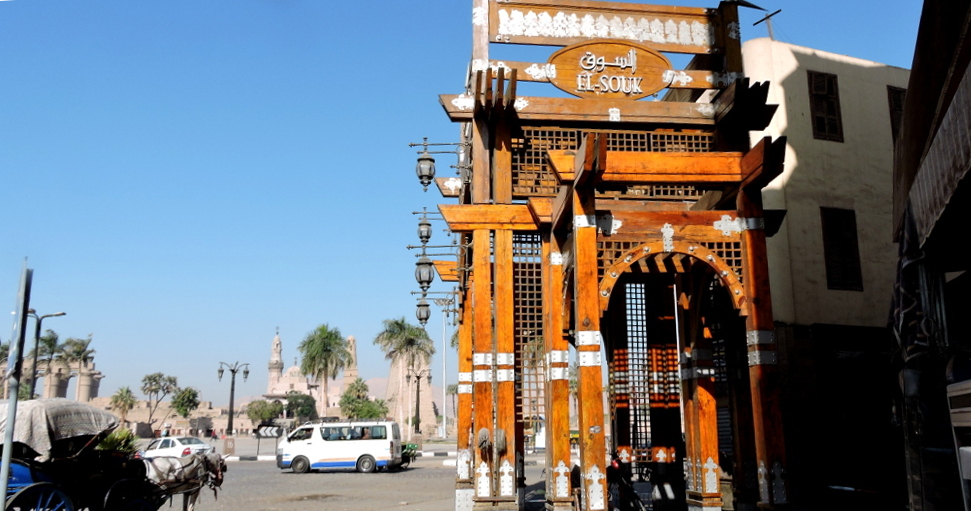 Not only the souvenir sellers suffered from the small number of tourists. It was the same for the drivers of taxis and horse-drawn carriages and the tour guides. Everyone wanted to sell something. When I was away from the tourist sites, it was quiet. In the city, I only saw locals.

I had made plans to meet my friends, the “Les Doudz” family at the temple of Karnak. Everywhere else this family with two kids stood out but not here. There were lots of tourists at the temple and I eventually found them in the columned hall. 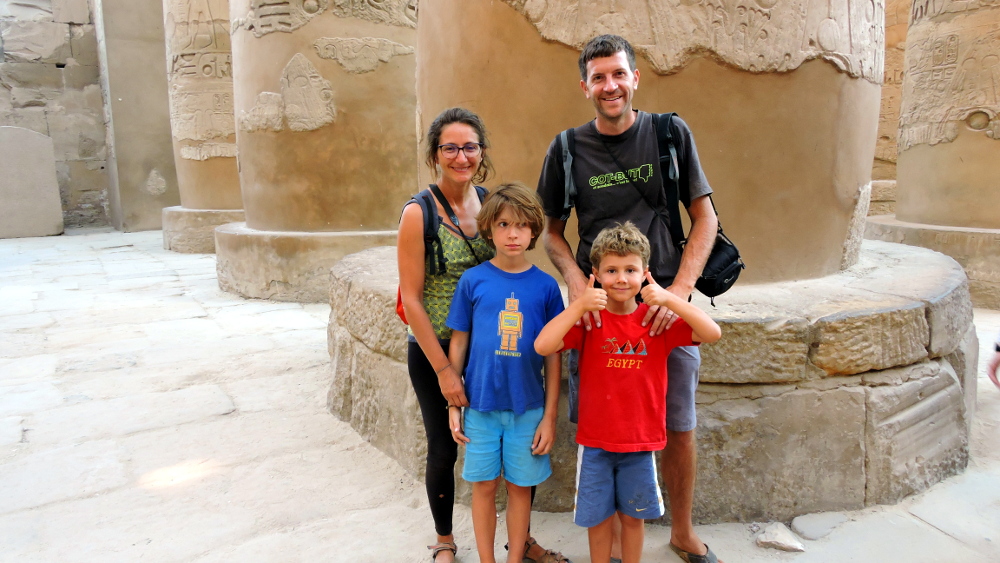 It was the largest temple I had visited so far. The reliefs were in great conditions. 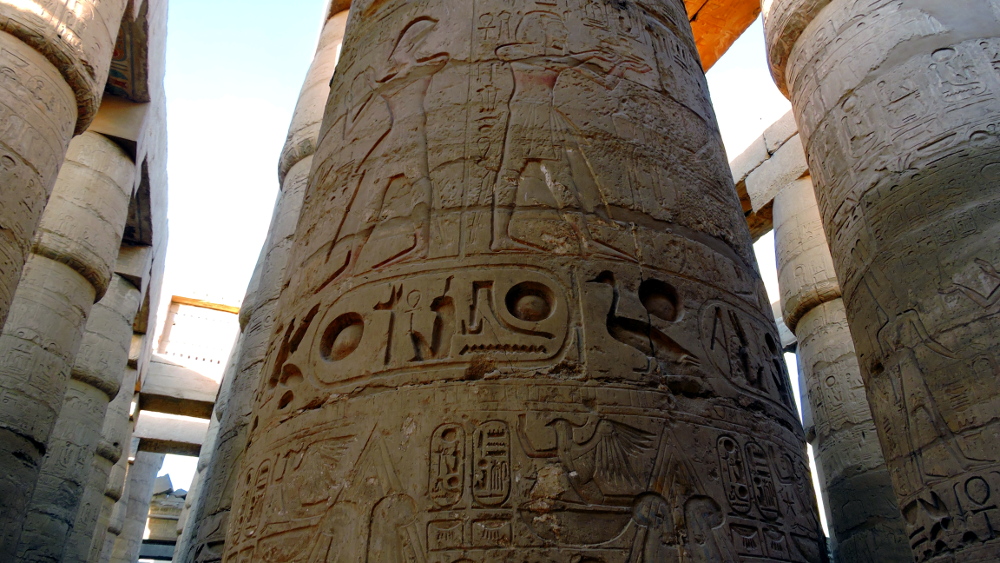 The afternoon light was always good for a few photos. 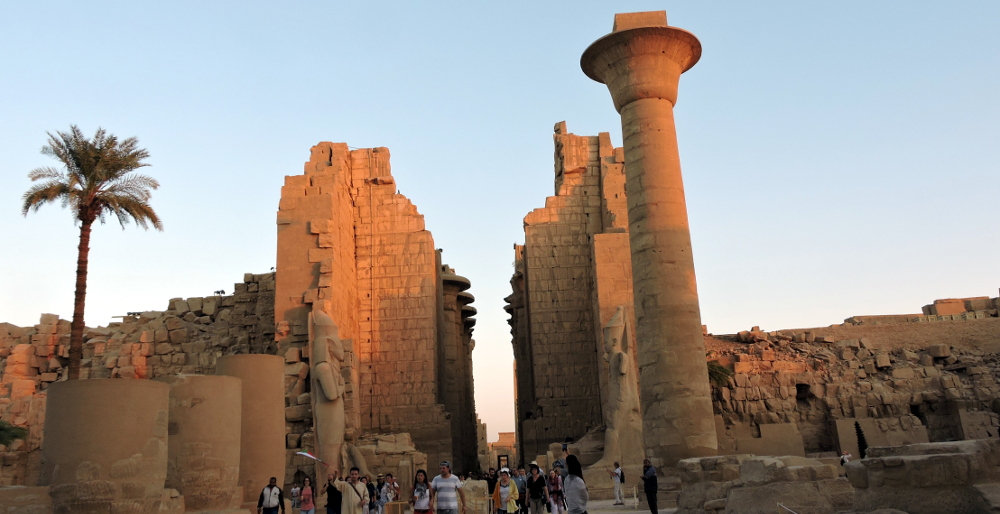 Next morning, I got up a bit later because I wasn’t feeling well. I had a sore throat, a cough, and probably a slight fever. Finally, I got up because usually cycling was the best therapy.

It was definitely a good idea to cycle to the Valley of the Kings. I didn’t have any problems to take the bike on the ferry across the Nile. 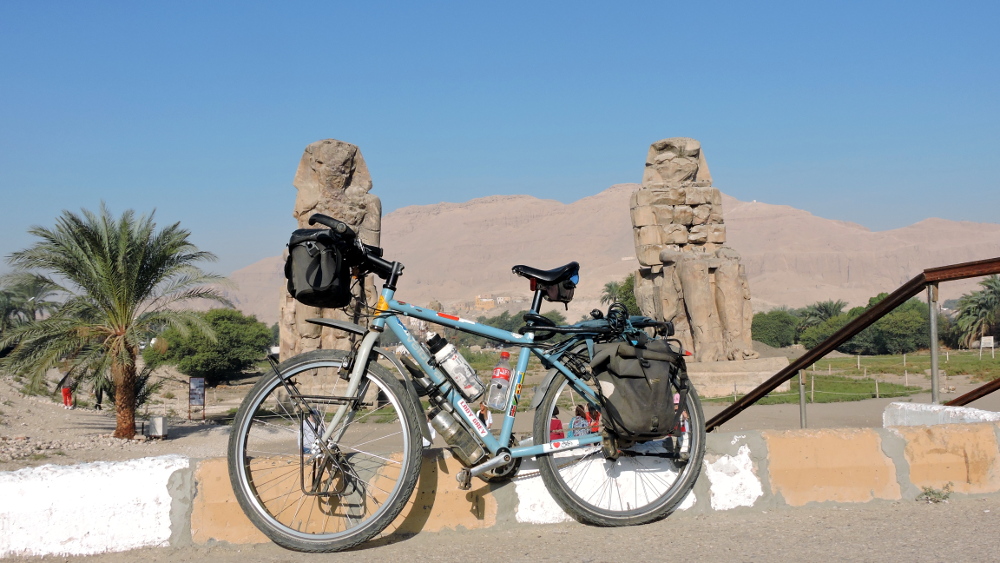 The way to the valley was lined with statues and temples. 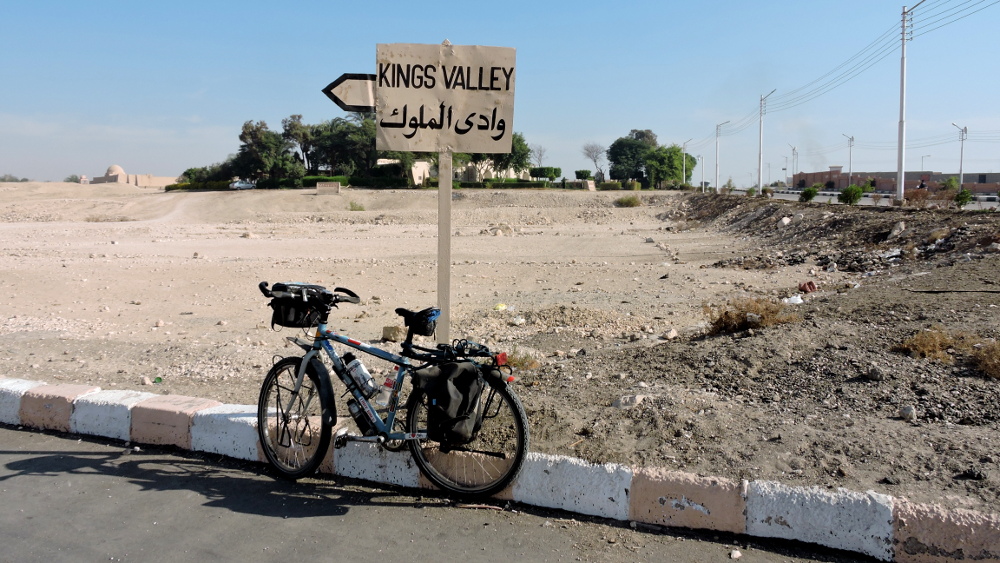 I met the Les Doudz at the entrance.

One had to leave one’s camera at the entrance to the valley.  Therefore, no photos.

Three of 64 graves were included in the entrance fees but one had to pay extra for the most famous ones. We decided that we had to visit the tomb of Tutankhamun.

It was very impressive to see how corridors and halls had been carved into the stone. All burial gifts had been stolen over the millennials. Unlike what I had seen in the temples, there were very few reliefs in the burial chambers but some were decorated with very colorful paintings. Especially for Tutankhamun. Unbelievable how this feast of colors had been preserved over the years. Maybe there had been a helping hand?

Unfortunately, the bicycle therapy hadn’t helped, I didn’t feel well, and had zero energy. The family continued by taxi. I had parked my bike at a souvenir stall and rested there for a while. They were very nice, offered me a chair, and fetched tea. Because the Valley of the Kings was firmly established on the tourism map, the vendors didn’t suffer too badly from the lack of visitors. I wondered why I didn’t see any tourists in town. An Egyptian said, the Germans would fly to Hurghada and visited the valley during a day trip. That was almost 300 kilometers round trip. Because I didn’t feel well, I only wanted to get back to my hotel.

Luxor was a good place to be a little bit sick. It wasn’t a difficult decision to stay an extra day and rest.

My only plan for the day was to relax and recover. I took a hot shower at lunchtime and felt much better after it.

I walked through town and saw a touring bike in front of a hotel. It belonged to Joel, a French long-distance cyclist. I left a message for him.

In the evening I went to the temple of Luxor. It was incredible. 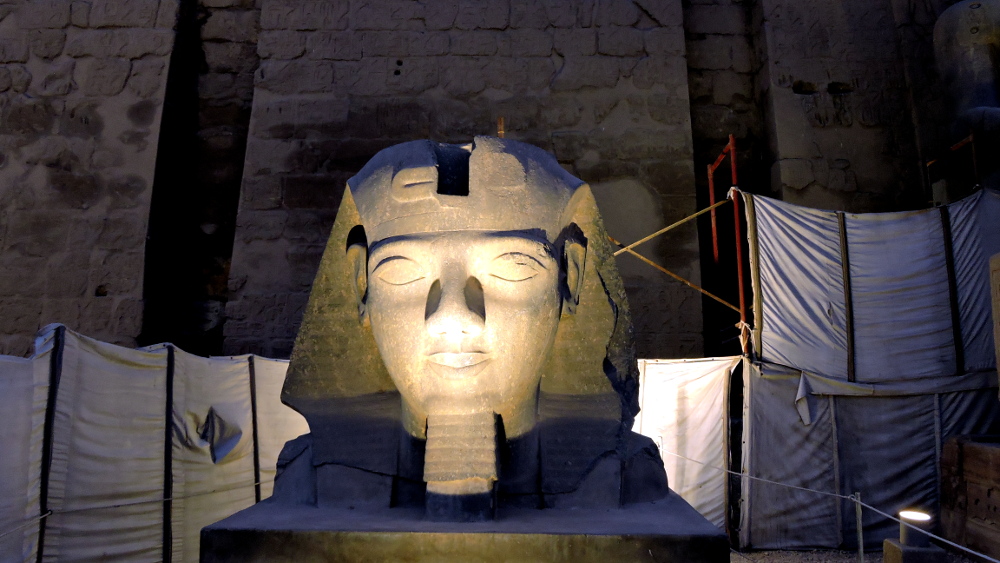 The few tourists who still visited were in the garden. They had to return to the Red Sea. 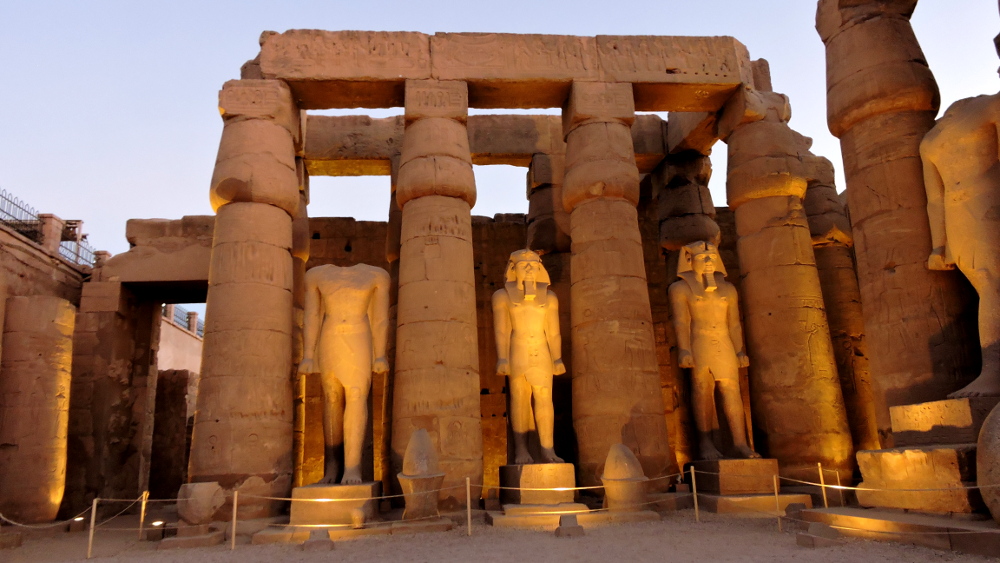 I had an unencumbered view In the beautiful evening light. 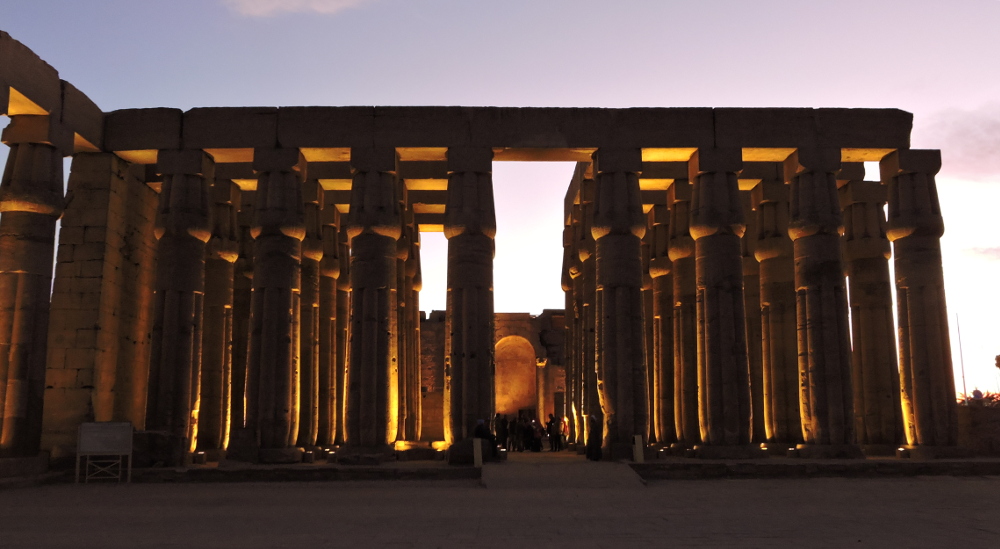 The temple is dedicated to the God Amun and his daughter Maat. Most of the reliefs showed offerings. 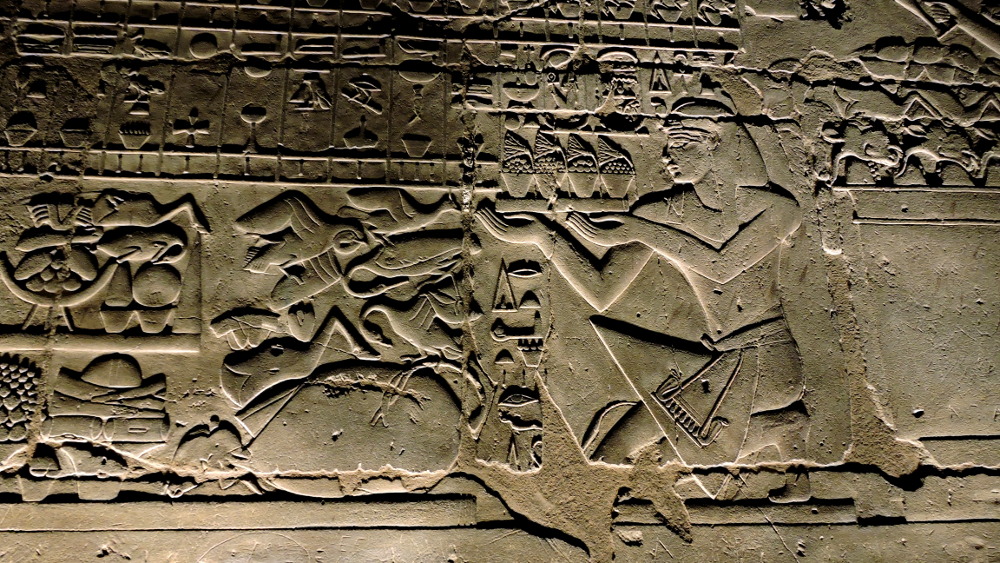 An alley of sphinx connects the temples of Luxor and Karnak. 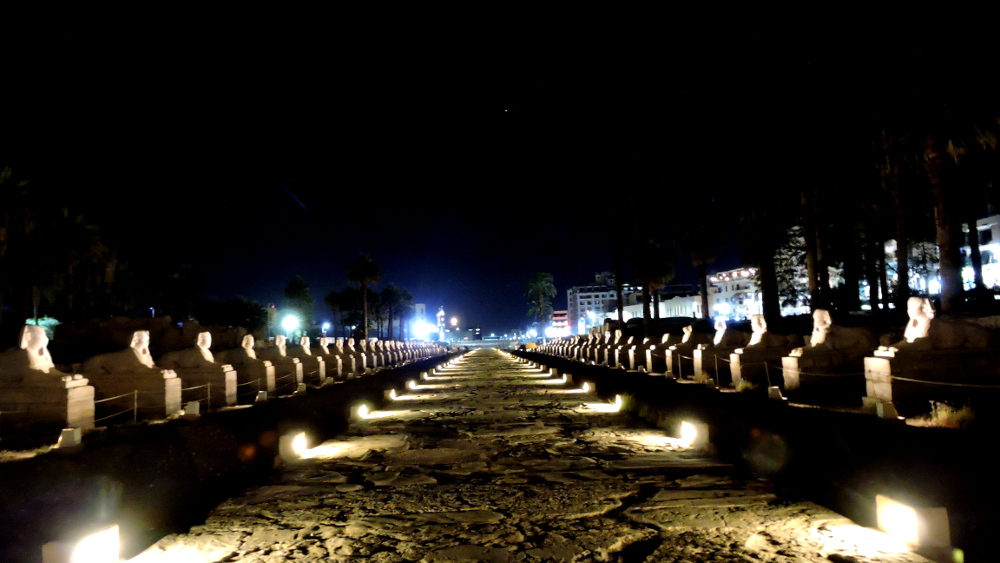 In the evening I planned to meet David, a young local cyclist. Joel, the French cyclist, joined us. He was cycling in the other direction from Cairo to Cape Town.

David, being Egyptian, could cycle everywhere without a police escort. Apparently, I shouldn’t have been allowed to cycle on the western side of the Nile between Edfu and Esna.

Bevor I left Luxor, I had breakfast with the family in their truck. They also planned to continue today. I had spontaneously decided to cycle to the Red Sea but the family had to go to Alexandria.

We knew we’d meet again soon but didn’t realize how soon it’d be.

2 Gedanken zu “Egypt: Along the Nile”