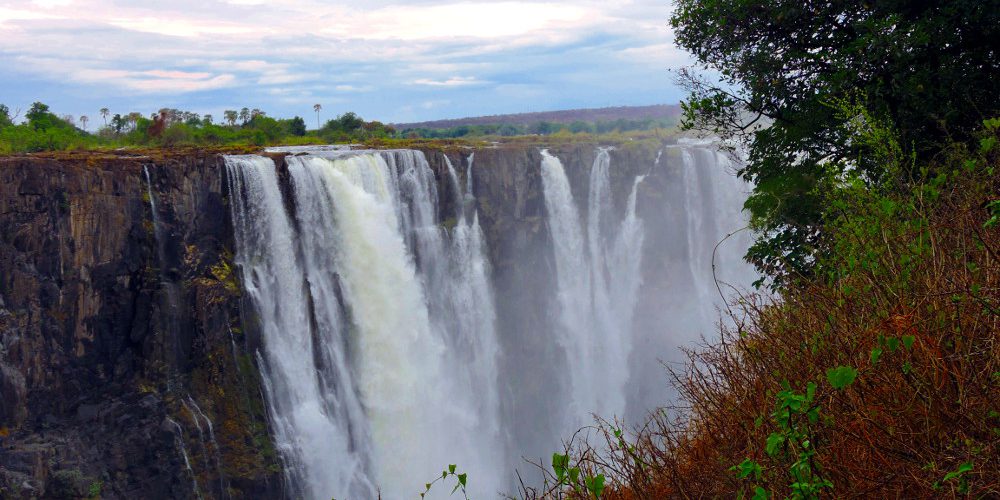 Zimbabwe is a country that had known hardship only because of Mugabe’s dictatorship. Almost all white farmers had been chased off their farms. The farms were distributed to friends and family of Mugabe who had no interest in agriculture. The harvests declined drastically.

A draught lasted for several years and hardly anything grew. By now the country was amongst the poorest in the world.

But I wanted to cycle a short distance between Victoria Falls and Botswana. Once again, it was very educational. 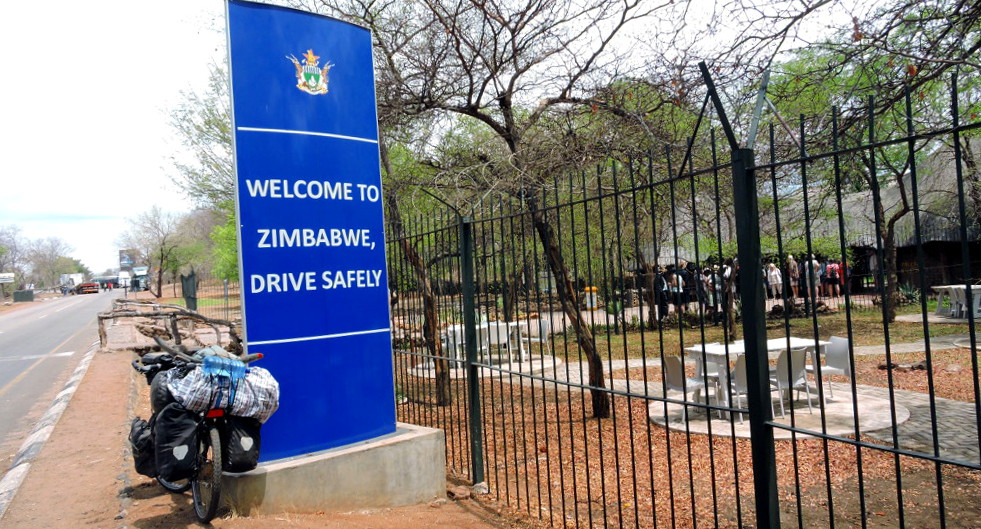 There were several ATMs and I was very happy to get USD from the machine. I couldn’t figure out how to obtain local currency. Eventually I asked a guard. He laughed and told me the Zimbabwean currency had been abolished. People mainly used USD but Euros and other Western currencies were also accepted in some places.

Mmmh, that really wasn’t a good sign for the country.

Straight away, I went to the Victoria Falls. 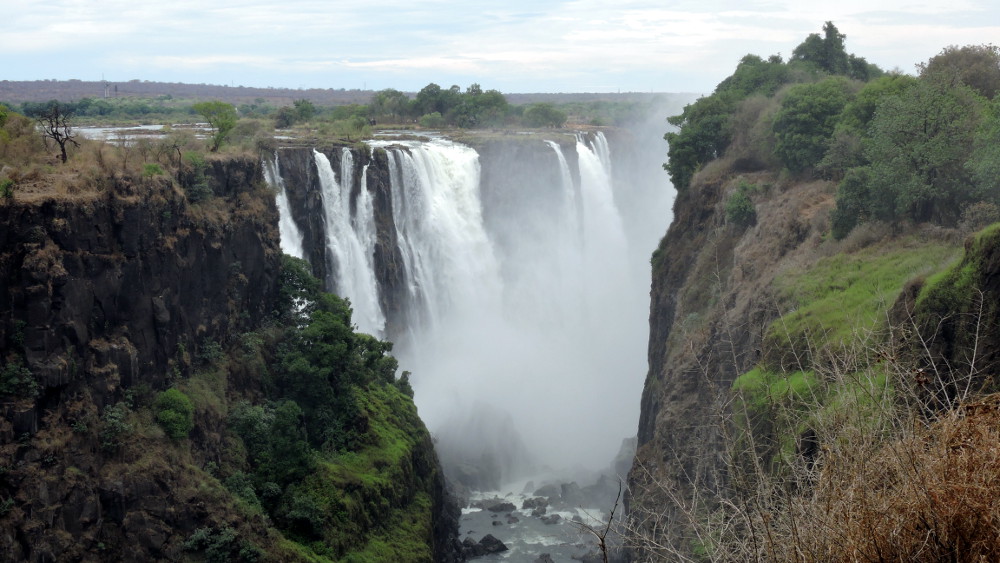 It looked totally different than on the Zambian side. 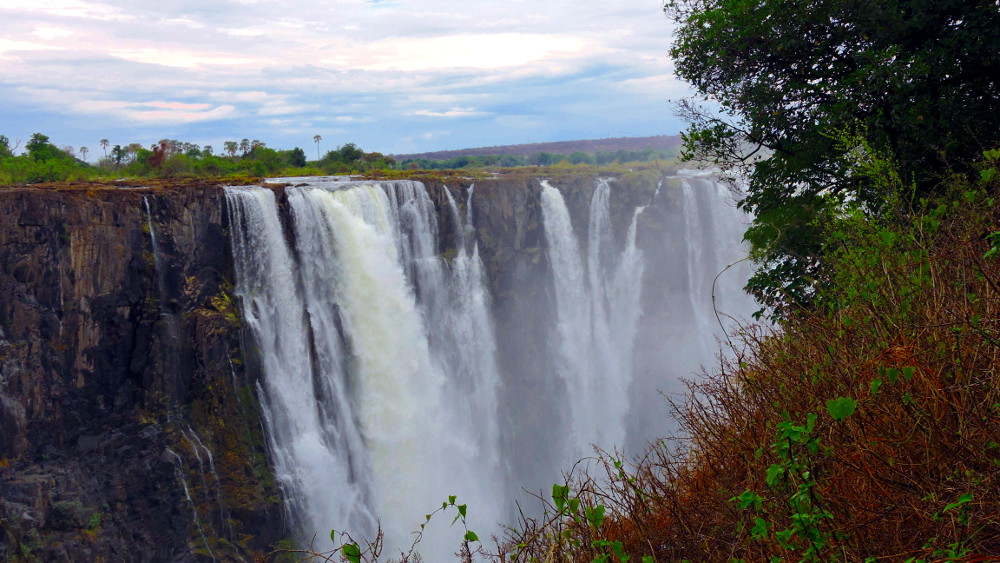 There was a lot of water everywhere.

I couldn’t figure out how the fisherman managed to remain on his feet. 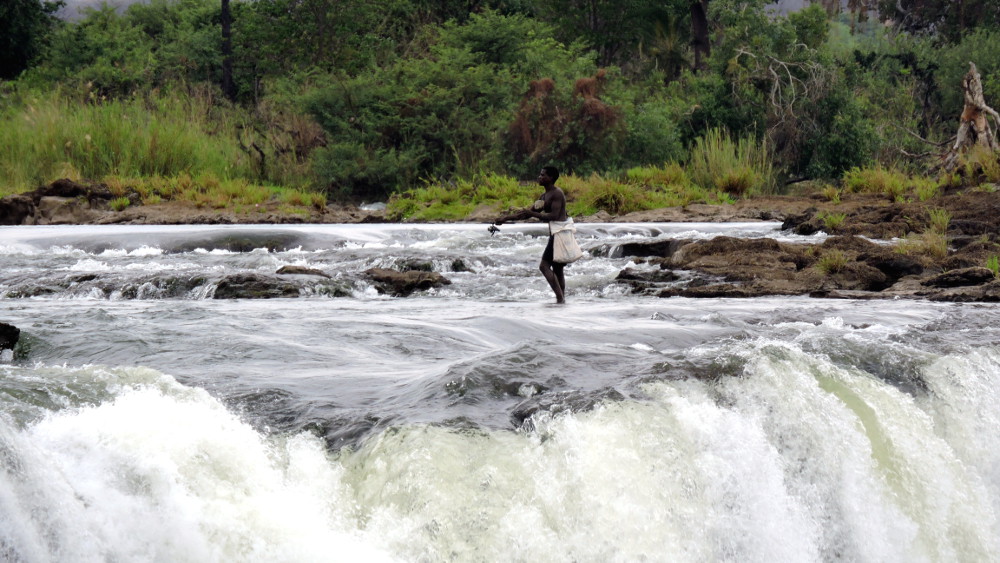 In some places the spray made it impossible to take pictures without an underwater camera. 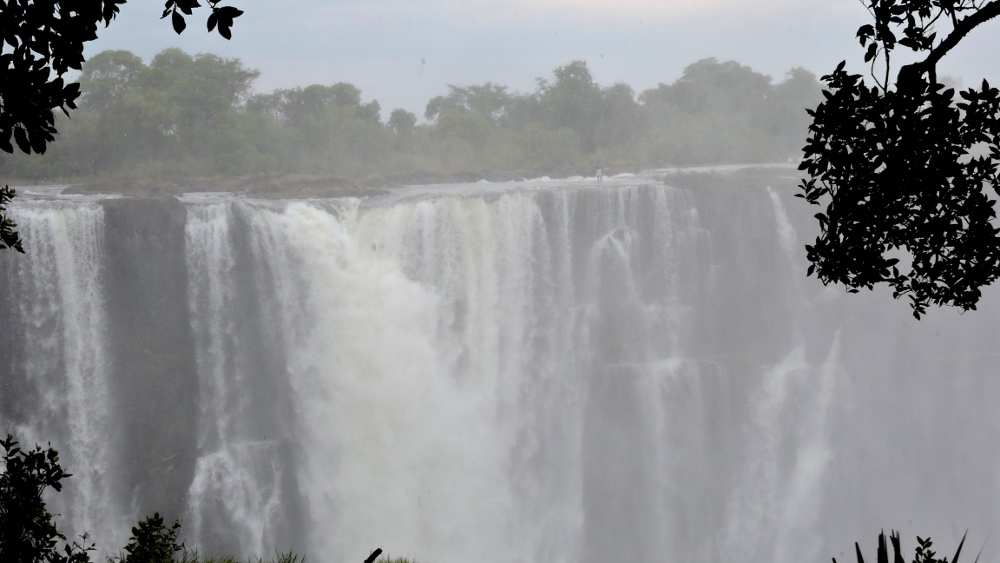 Very strange because the Victoria Falls are on the same river in Zambia and Zimbabwe. And there was a severe draught in Zimbabwe.

(Later I heard that they use artificial water pipes to fill the falls for the tourists. Was this true or not? It could be an explanation).

Not only because it was Sunday but also because the falls were a lot more interesting on this side, it was much busier than it had been in Zambia. 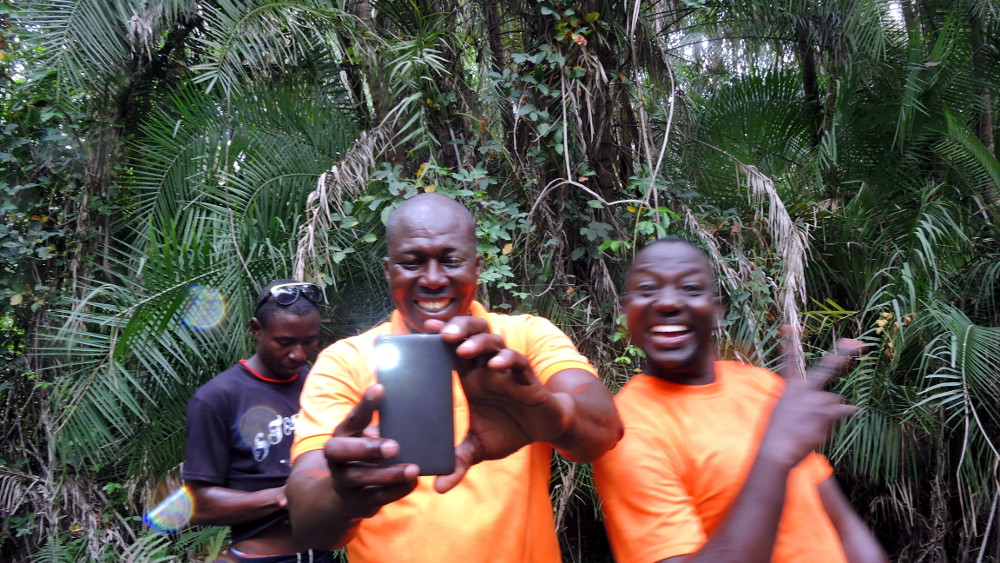 Everyone was in a good mood. 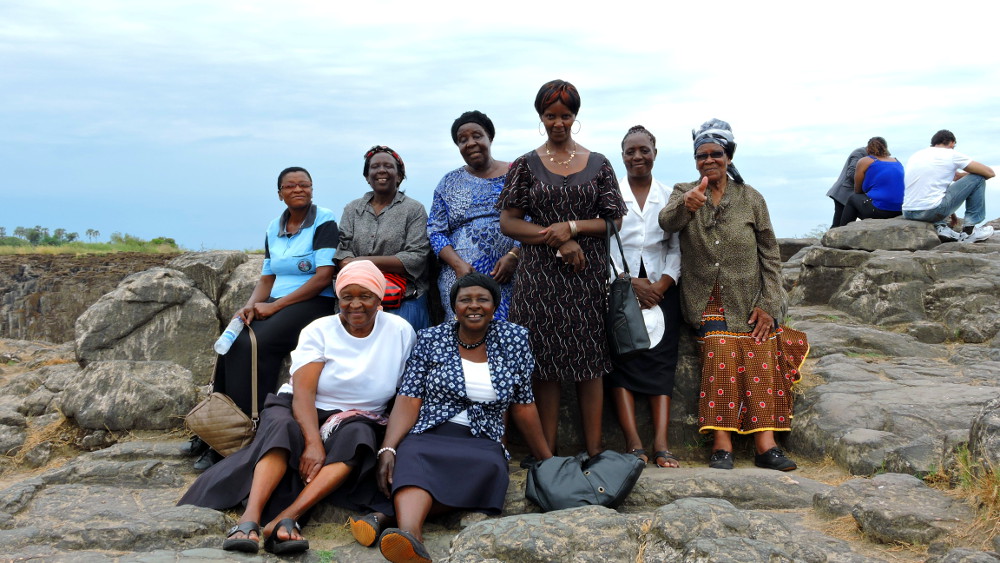 Including these women from a Methodist Church who had fun with me. When I told them, I had come from Germany by bike, they just laughed.

In the middle of the village, there was a warthog family. 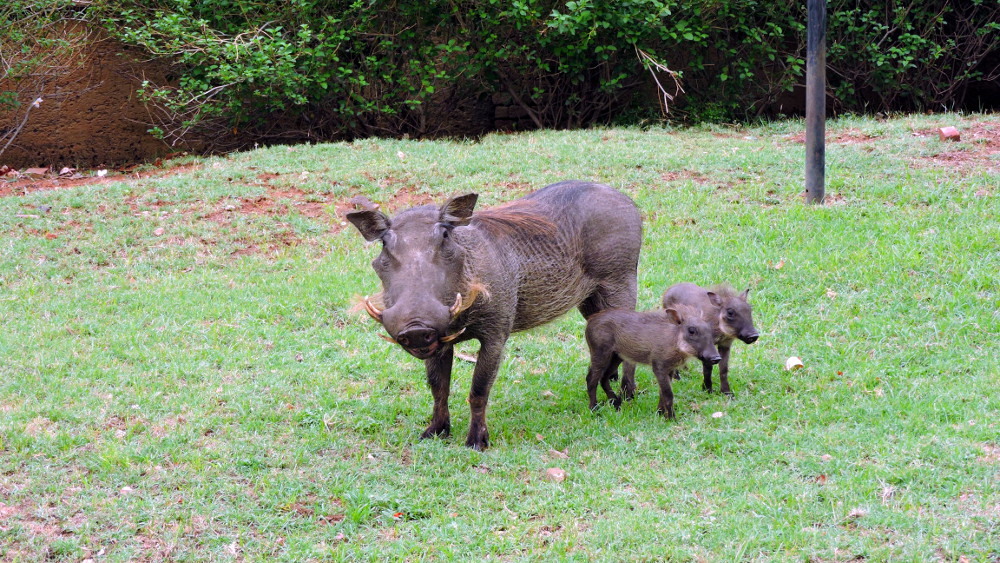 They were rather skinny compared to those I had seen at the Senegal River.

Next day Marcelo arrived and we continued together.

These boys collected discarded cans from the roadside. 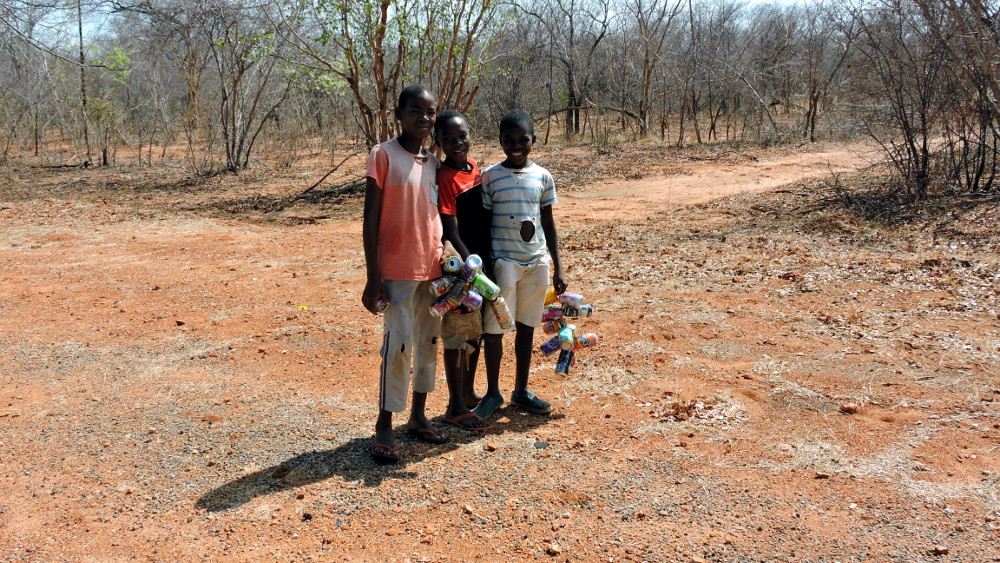 Maybe they got a few cents for them and it kept the place clean.

People asked us if we were not afraid of wild animals. They talked as if the place was full of lions and hyenas. I’d have loved to seen giraffes but no matter how hard we looked, we didn’t see any.

Eventually a few elephants appeared in the bush. 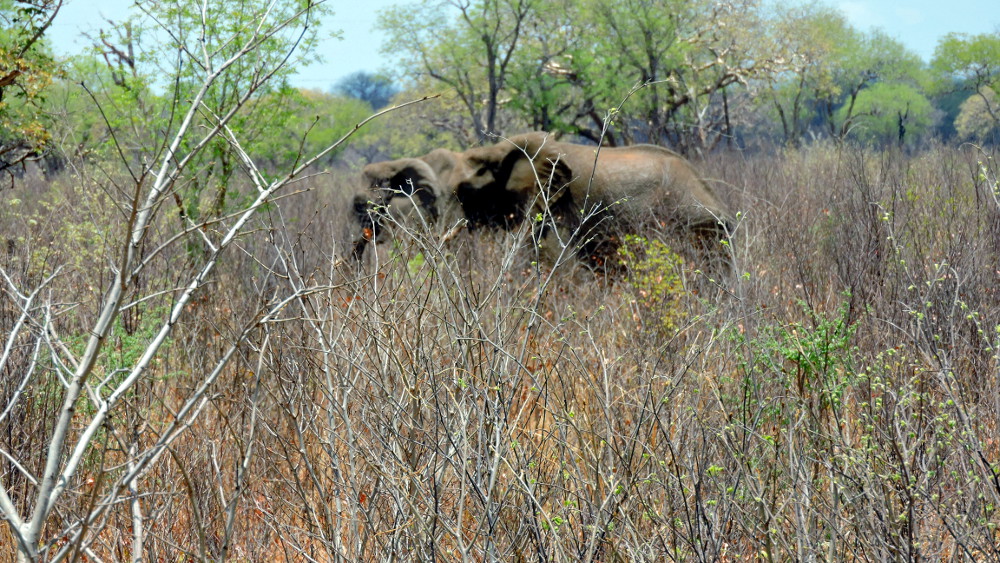 But they continued without paying attention to us. 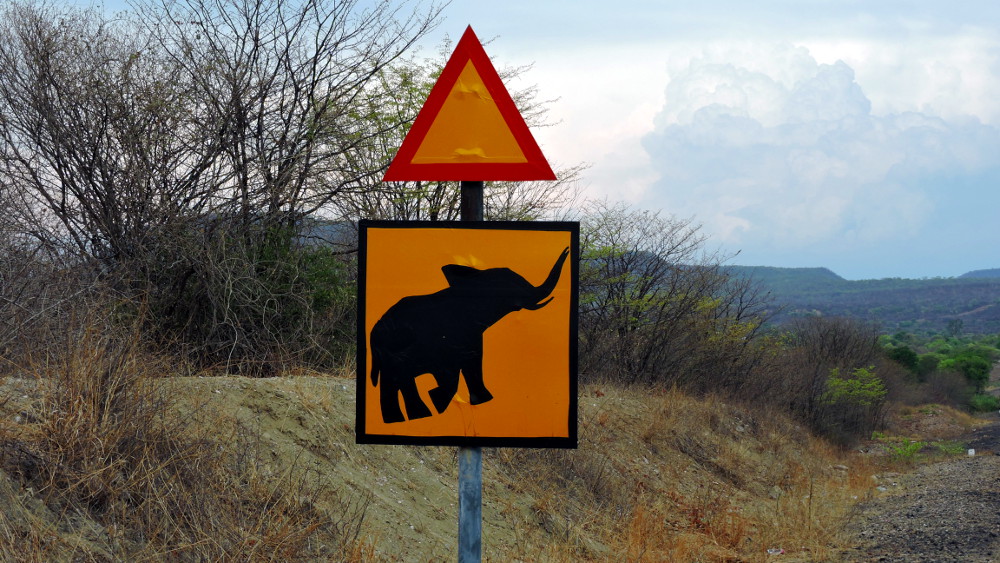 There were other interesting animals. 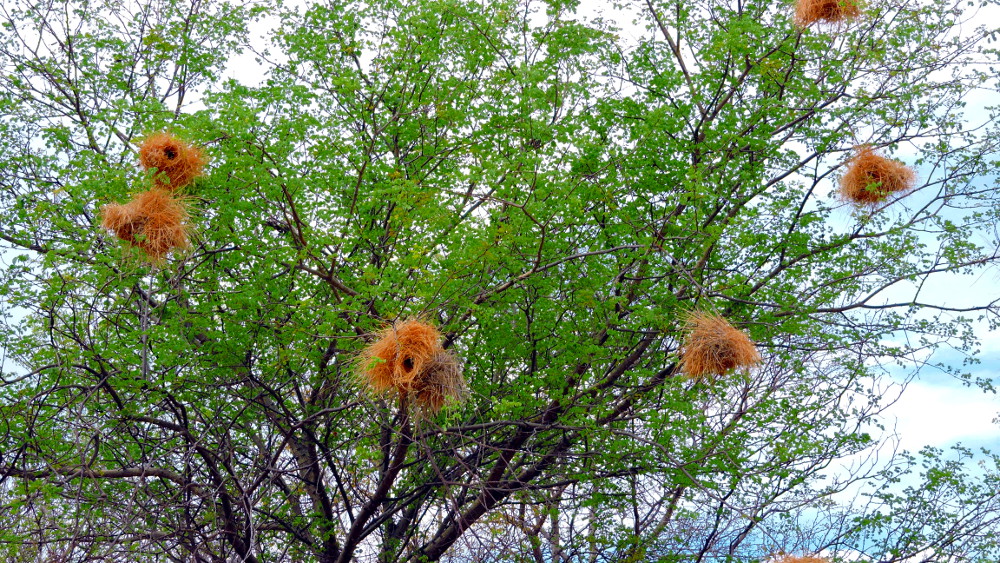 These birds are called weaver birds. Their nests at the tips of the branches were real pieces of art. Very clever how the little ones were softly rocked to sleep.

Some people warned us about the many lions which roamed here.

Then a flat tire. 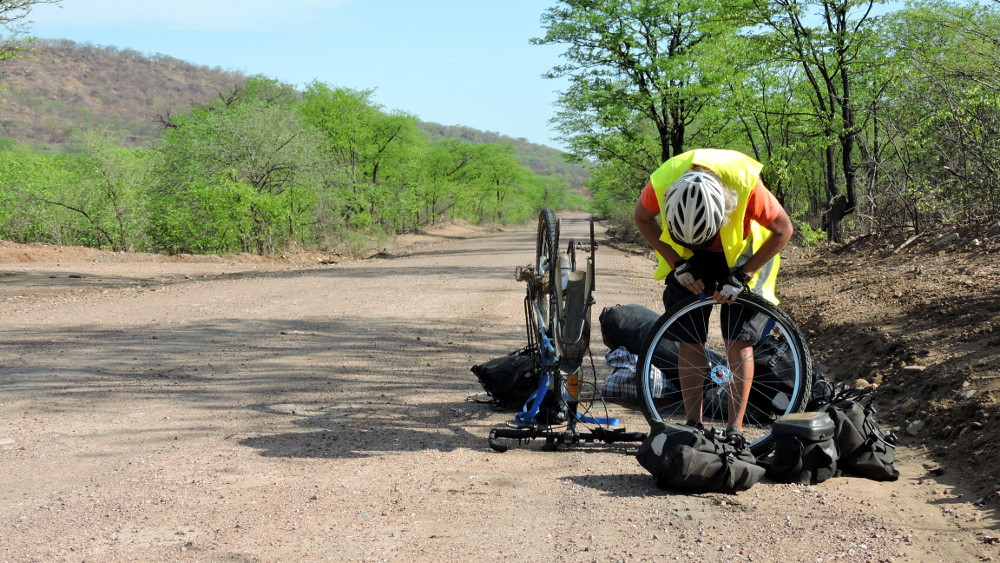 Not ideal if a lion hid behind the next tree.

We were stopped at the entrance to Sinamatella National Park. 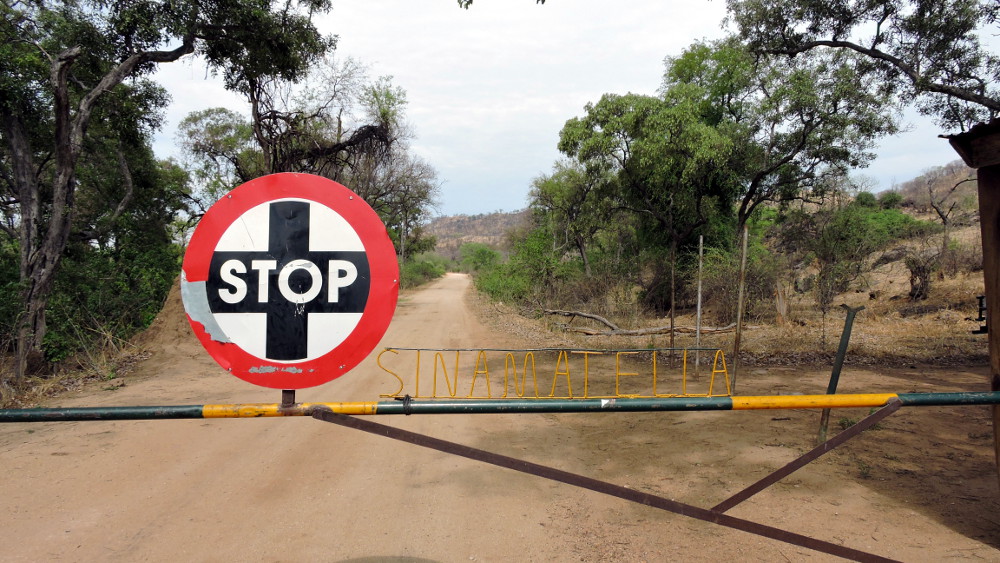 We couldn’t convince the rangers. 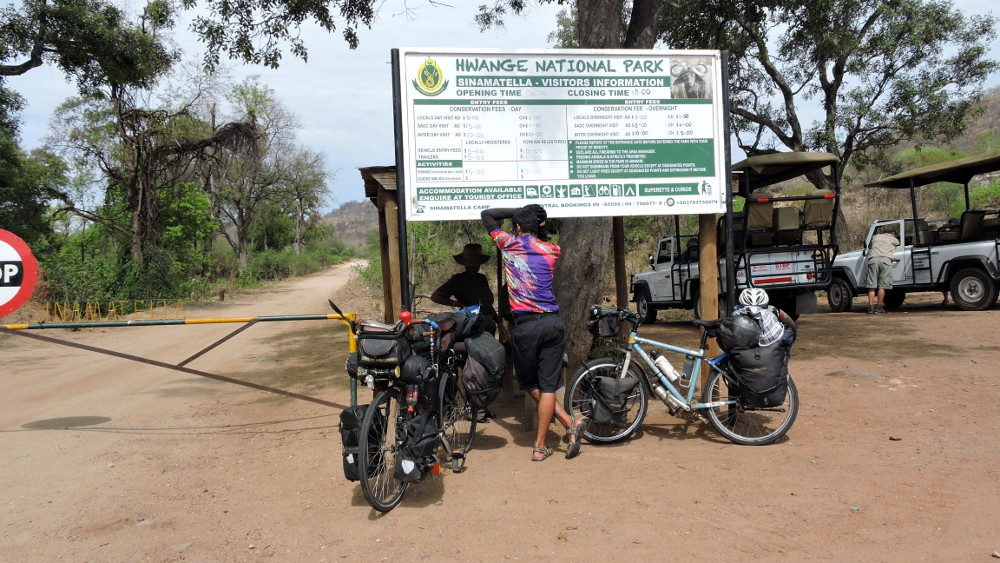 They meant it when they said no. They strictly applied the rules and not even motorcycles were allowed in. Two days ago, a lion came outside the gate.

We turned around and backtracked through a coal mining area. 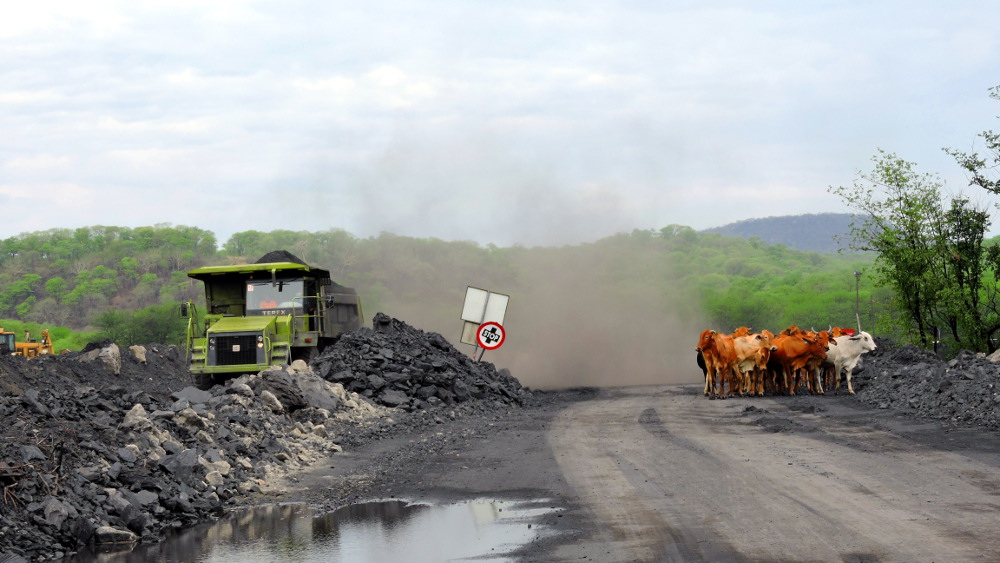 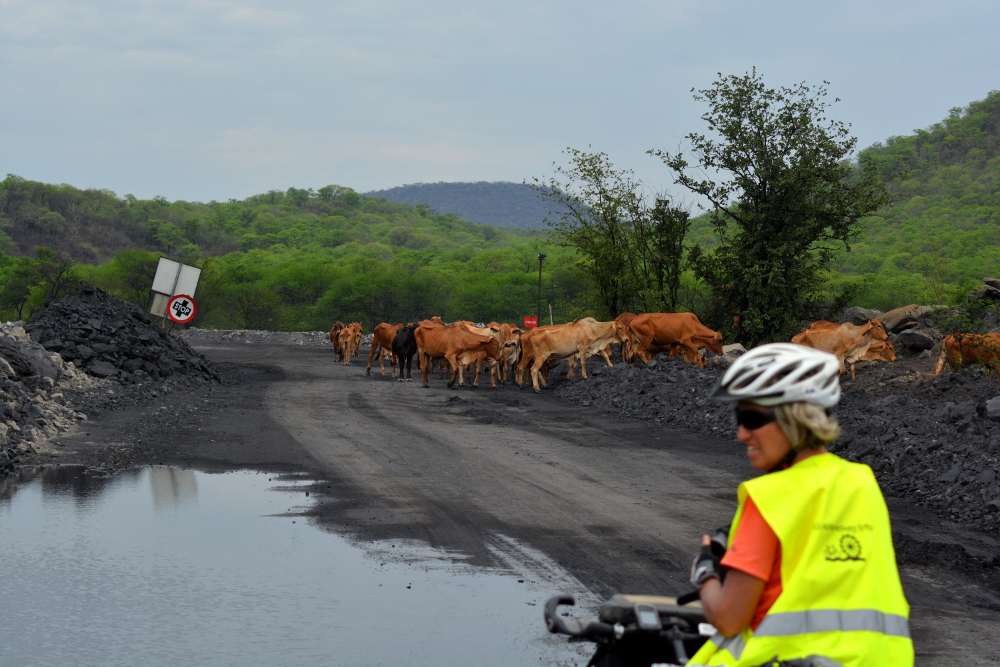 It was very hot and we were getting more and more tired.

After we had rested for a good long while, we didn’t feel like continuing. Fortunately, there was a Caritas office. 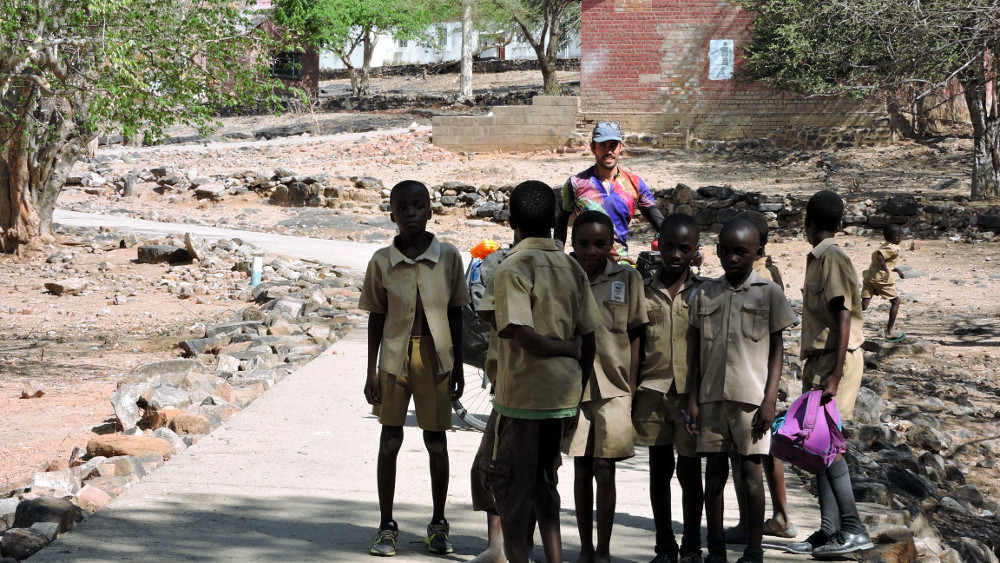 The schoolboys showed us the way to the pastor. He allowed us to camp there and we could even take a shower. That was great news after passing through the coal mining area.

So much could grow here if there was rain. Now there were only remnants of the vegetable garden. There were just a few Caritas stations left in Zimbabwe.

Marcel’s detour on a dirt road let to another flat tire. 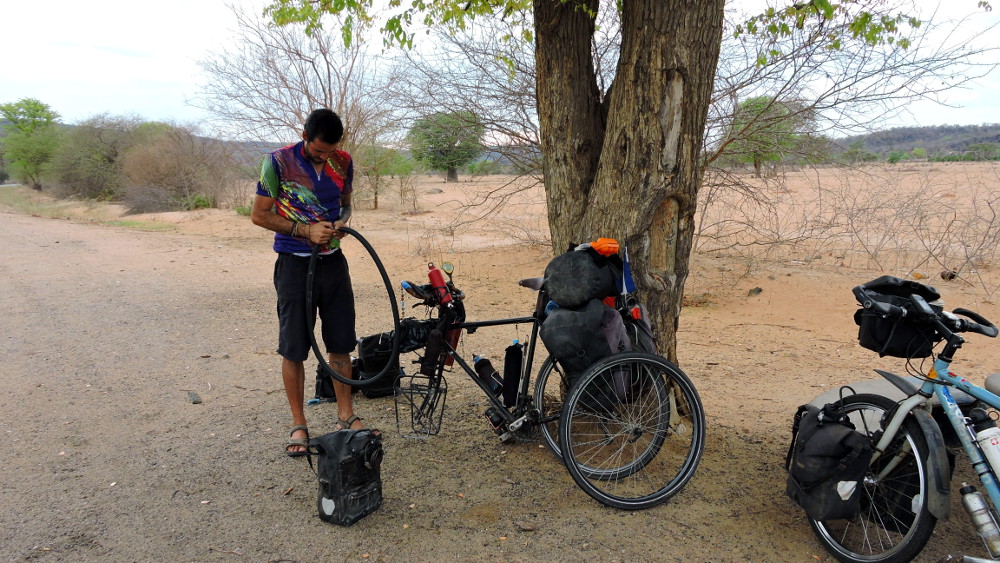 And it wouldn’t be the last one.  By now it was very hot and I thought that due to the heat, the patches didn’t stick well.

The day before Bulawayo it suddenly got cooler and it rained. 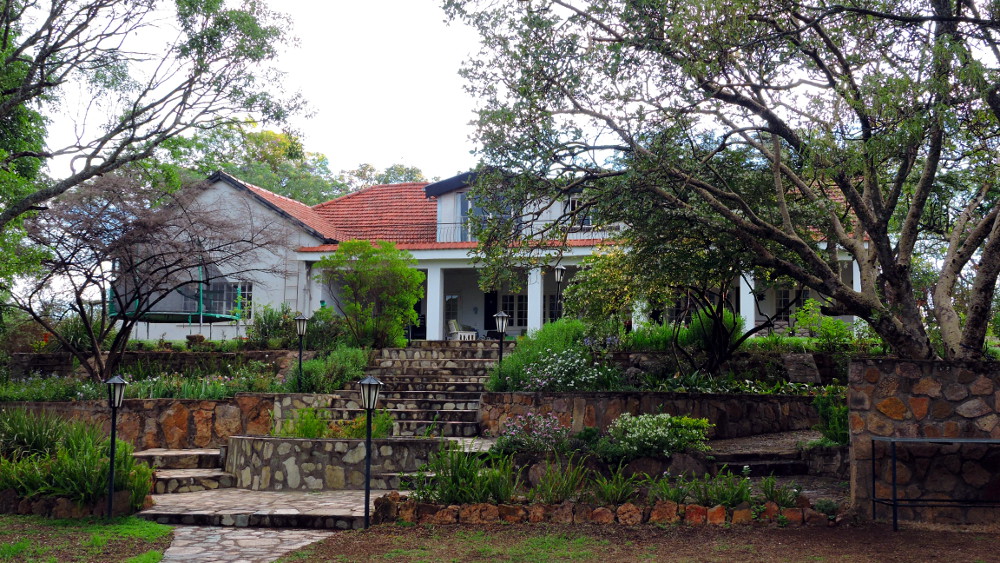 We could pitch our tents under a roof. And there was the luxury of a kitchen and a common room.

We liked the city so much 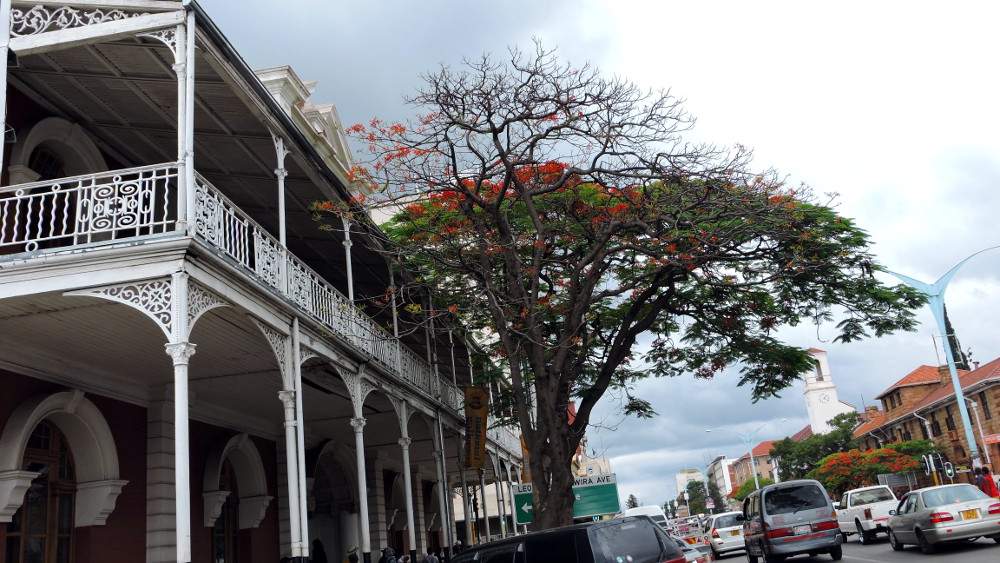 That we stayed longer.

Marcelo tried to get his bike fixed.  Like in almost all African countries, it was difficult to get spare parts.

A sign about the economic situation in the country were the long lines in front of the ATMs. At each machine that still had money, there were more than 20 people. They could only draw USD 70.

(A few weeks later there was no money at all and it turned out that the government had run out of dollars. What’s the current situation?)

How nice to be woken up with a slice of cake on my birthday. 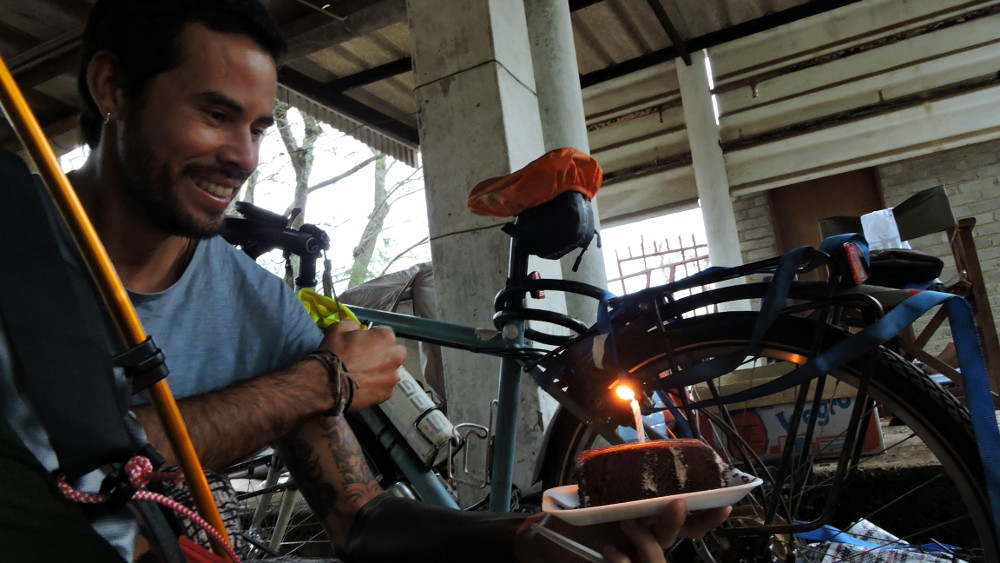 Thank you, Marcelo! Sometimes it was nice not to be riding alone.

It was a surprise when Marcelo got a message that he could get his visa for Botswana at the border. He had waited for it in Lusaka for six weeks and eventually gave up. His El Salvadorian passport made things a lot more difficult than my German one.

Now we could cycle together to Botswana.

It was my birthday and I got to decide which route we’d take (as if that had ever been a problem. We always agreed very quickly which was to say, Marcelo quickly agreed with my suggestions).

We cycled through a beautiful neighborhood of villas to Matobo National Park.

It was known primarily for its rock formations. 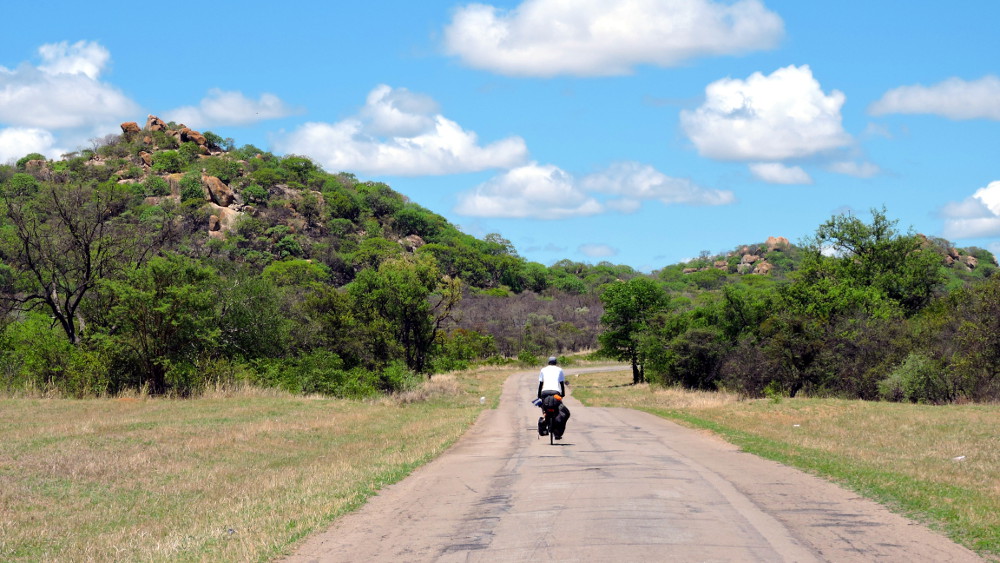 My memories would be of these lovely creatures. 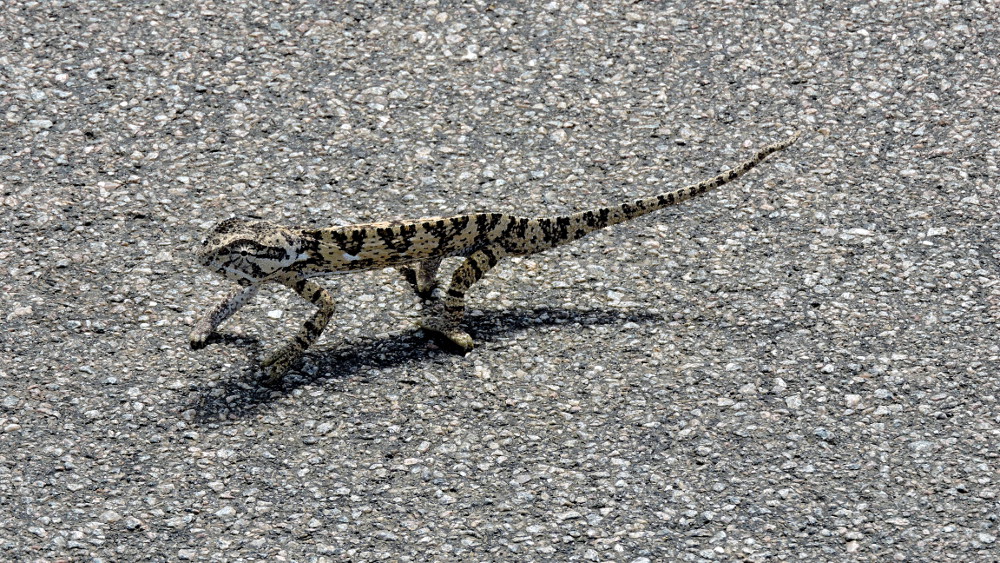 When I tried to save the chameleon from the road, it hid behind the pannier bag. 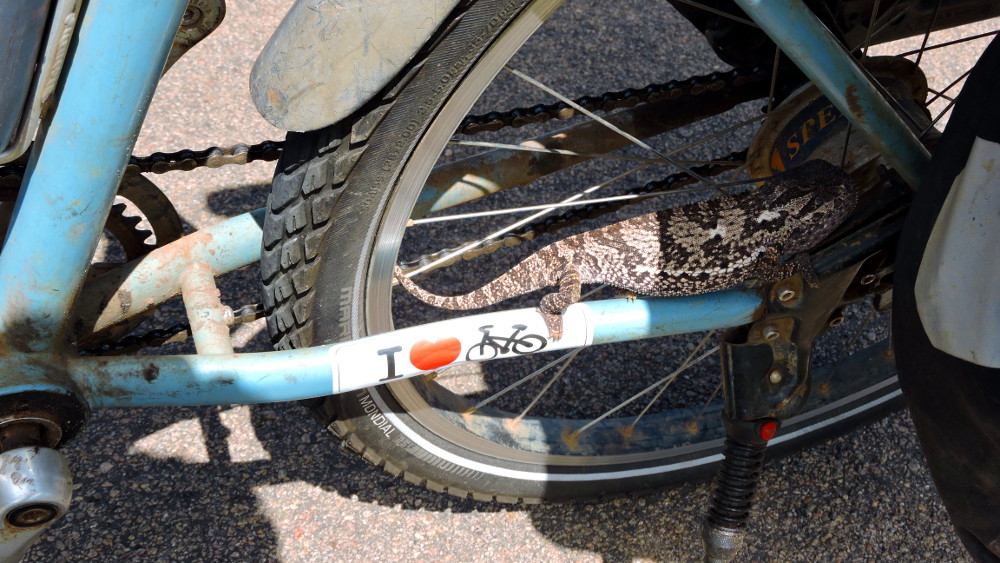 It hissed a lot when I used a stick to make it move.

Another birthday present was that Marcelo biked on a gravel road 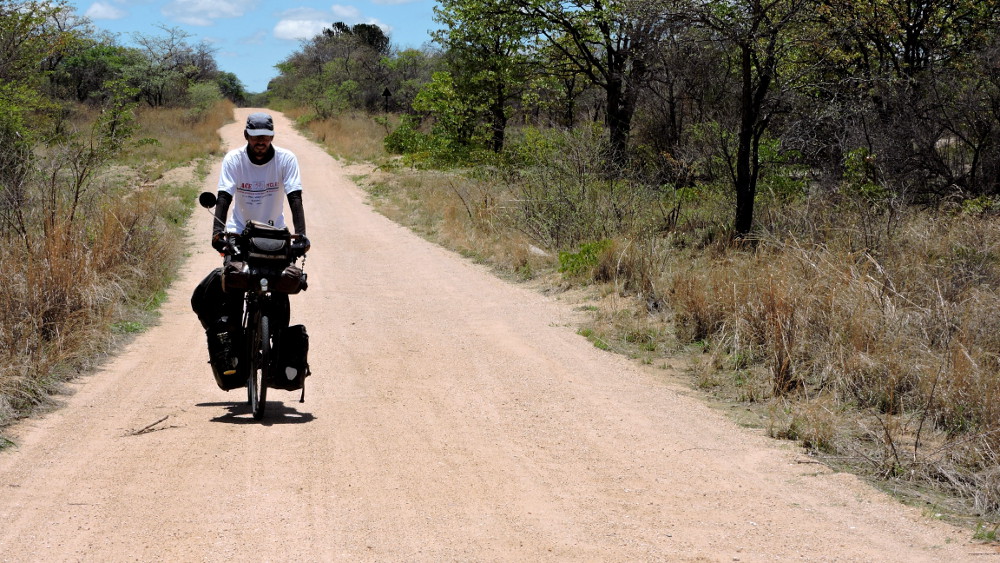 Which promptly brought another flat tire. 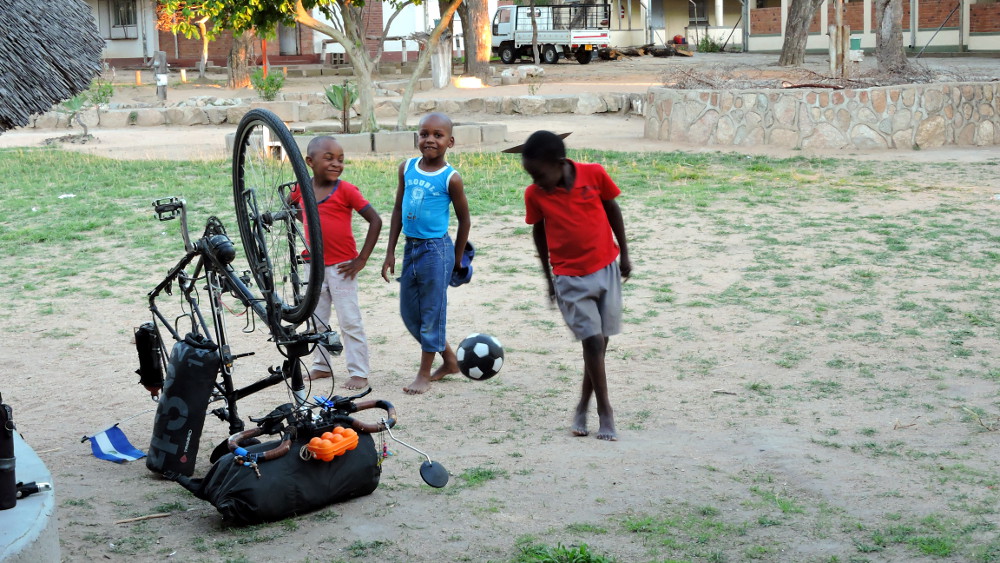 I’d recommend to anyone who planned a bike tour in Africa to have wider tires and a spare tire. Marcelo had used these tires for a long time and here he couldn’t get a useful replacement. 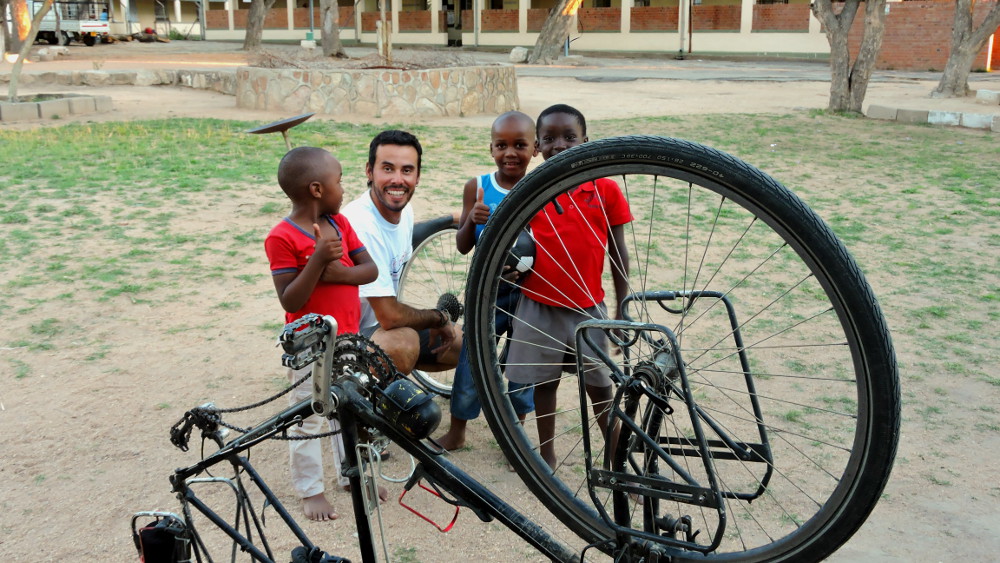 Marcelo entertained the kids while he repaired his bike.

The head mistress was very nice and answered all my questions.

They all had their “visions and missions” and had the task to encourage “Ubuntu” in the children. Ubuntu wasn’t just Linux software. It was an African life philosophy which was much further reaching than Christian charity. It also included respect, regard for each other, and hospitality which I had already often experienced.

The head mistress was black and was markedly relieved that only 20 percent (??) of the population were white. That I found surprising. Was I welcome? She was so nice to us that we must have been welcome. “Ubuntu” wasn’t a matter of color.

The departure from Zimbabwe was no problem. Stamp in the passport and continue.

Our short excursion lasted eight days and we cycled 660 kilometers.