News from Cameroon weren’t too bad except that Boko Haram made occasional appearances in the north. The south was considered to be one of the safer travel destinations. But what was the country really like?

After a long boat ride, to which I didn’t take well, we arrived with the usual two-hour delay in Limbé. It was a very dark night and I had to watch over my things carefully.

We had to hand in our passport on board and most passengers got theirs back on the ship. Not for me. The guy asked me for money in Cameroonian currency (CFA) which I didn’t have. I didn’t understand why I should pay at all. Apparently for the entry stamp which was strange. Since when was it payable? Once again, it was a matter of waiting it out. Eventually they’d return my passport.

Cameroon was my 13th country in Africa. I had never paid for an entry stamp and didn’t plan to do so in Cameroon. And indeed, eventually I got my passport.

A mechanic who was really interested in my trip waited for me outside. He helped me to exchange the rest of my Nigerian Naira to CFA.

Then he said, his friend Elvis was there and that I could stay with him and his family. What a nice welcome to this country. I hadn’t been so fortunate in Nigeria. 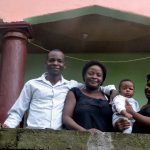 The daughter of the house gave up her room for me and made me something to eat. The baby son slept quietly on the sofa. Of course, the center of action was the TV.

Elvis explained why we had been able to safely travel through the Niger Delta. The owner of the ferry company had paid a lot of bribes to the pirates to ensure safety for the boats. Thank you.

The family would have liked that I stayed another night but I preferred to be on my own. It had all been too much in recent days.

I could pitch my tent next to a hotel at the beach. 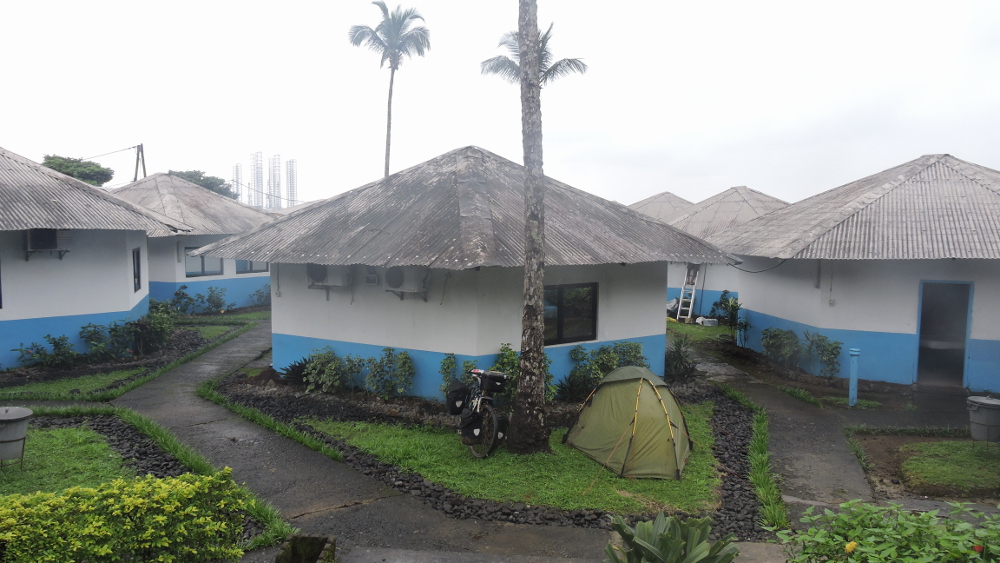 Now I could recover after my quick transit through Nigeria.

It was the beginning of the rainy season but I was quite lucky and could even use the pool. 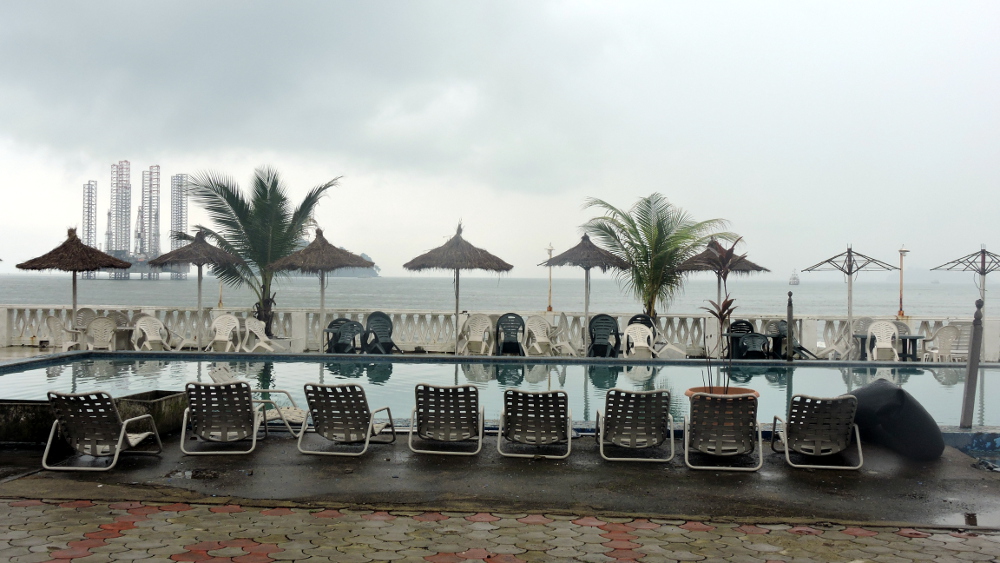 The ocean wasn’t very inviting and not only because there were oil rigs just off the coast.

The season and its bad weather made it impossible to climb Mt Cameroon but at least I wanted to reach the base camp in Buea by bike. I assumed that I would ascend about 250 meters over 24 kilometers.

It was a beautiful ride through the tea plantations. 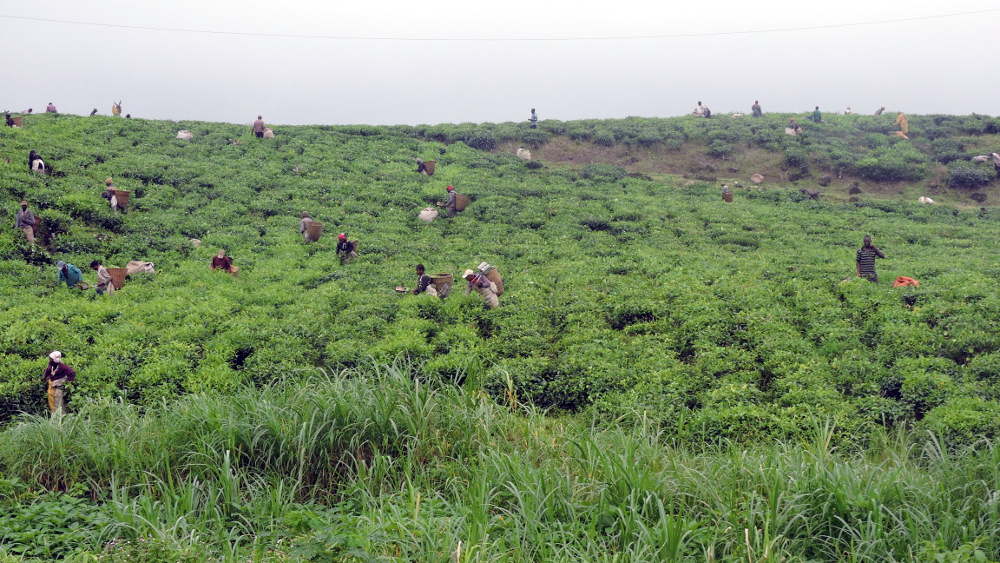 I discovered quickly that I must have been wrong about the 250 meters. The fog got more and more dense. 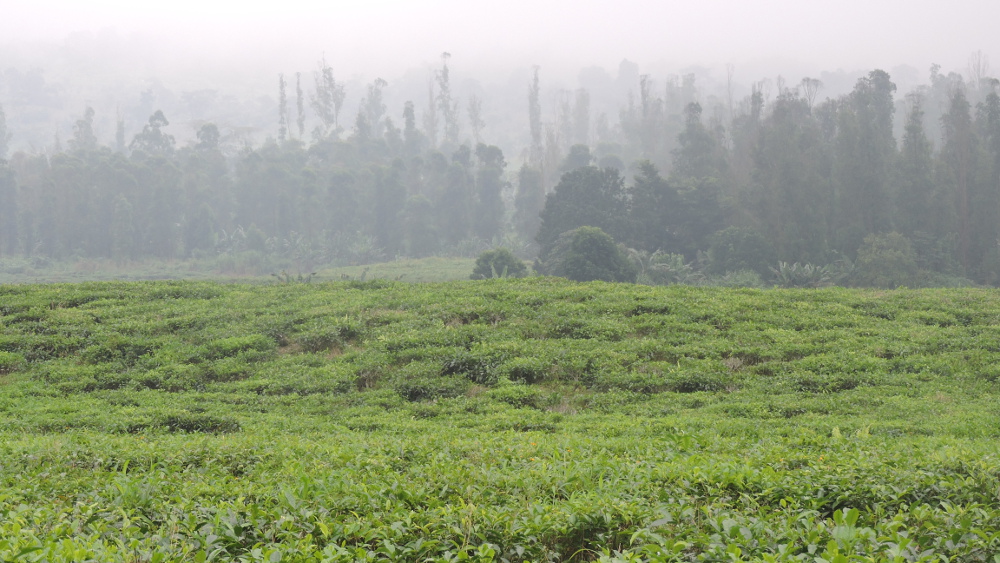 At 950 meters altitude I had reached Buea in the fog and I could only see 50 meters. I quickly turned around and was happy when the fog lightened. I quickly rolled down the mountain.

I cycled past farmers who harvested some herb. A boy ate a fruit. 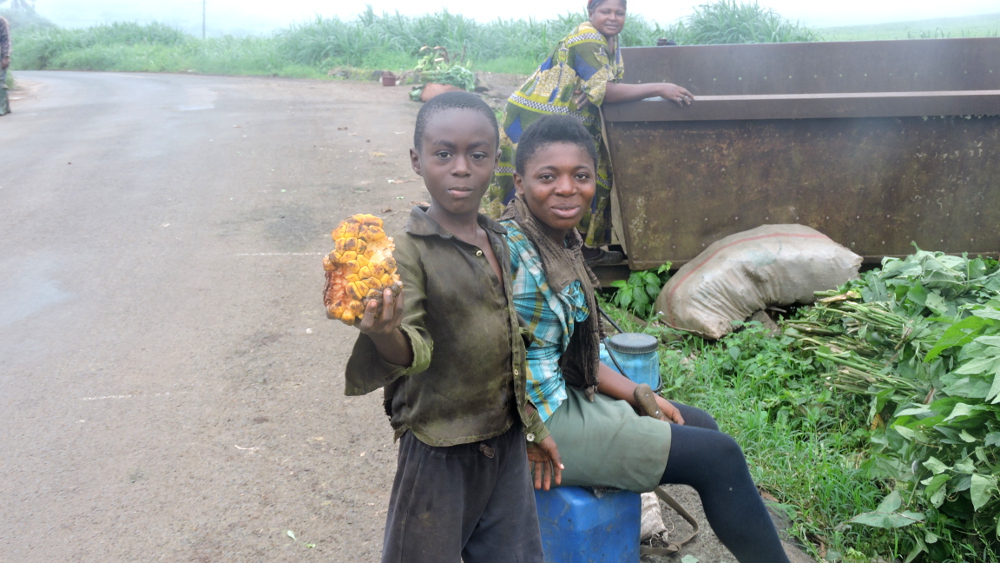 What was it? A “monkey fruit” which I hadn’t seen before or after.

It was such a joy to walk through Limbé. People left me in peace, no one came running after me or asked questions. On the first day, I met another white person.

In Nigeria I hadn’t seen any other cyclists. (Well, maybe one or two during the whole time). Therefore, I hadn’t looked for a bike mechanic.

In that regard, Cameroon looked a lot more promising. In Douala, the country’s largest city, I found several mechanics. There was a whole street with workshops. Fortunately, I had all the spare parts I needed because they didn’t exist here.

I finally wanted to replace the sprocket, chain ring, and chain. Rohloff had given me the tool to remove the sprocket so that I would return with such used up gears. I only needed a whip. 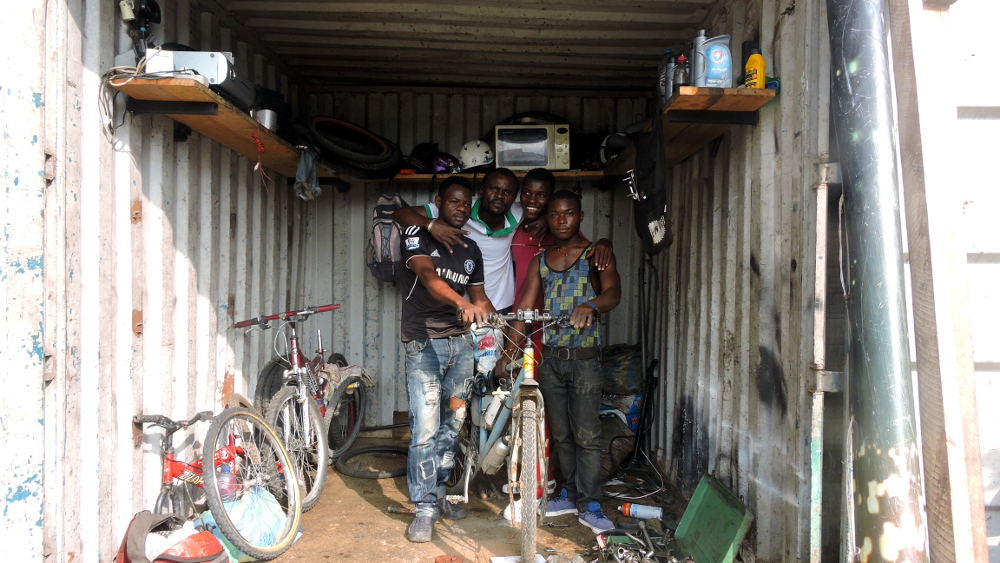 The container didn’t inspire much confidence but I was sure about myself. I had never turned around or exchanged a Rohloff sprocket but Markus from Velotraum had showed me what to do and told me what to pay attention to. Internet in the city was so fast that we could watch the instruction video from Rohloff. After a few hours we had managed. Like so often it wasn’t a difficult as some men made it out to be.

Then I cycled away from the coast and into the mountains and the rain. 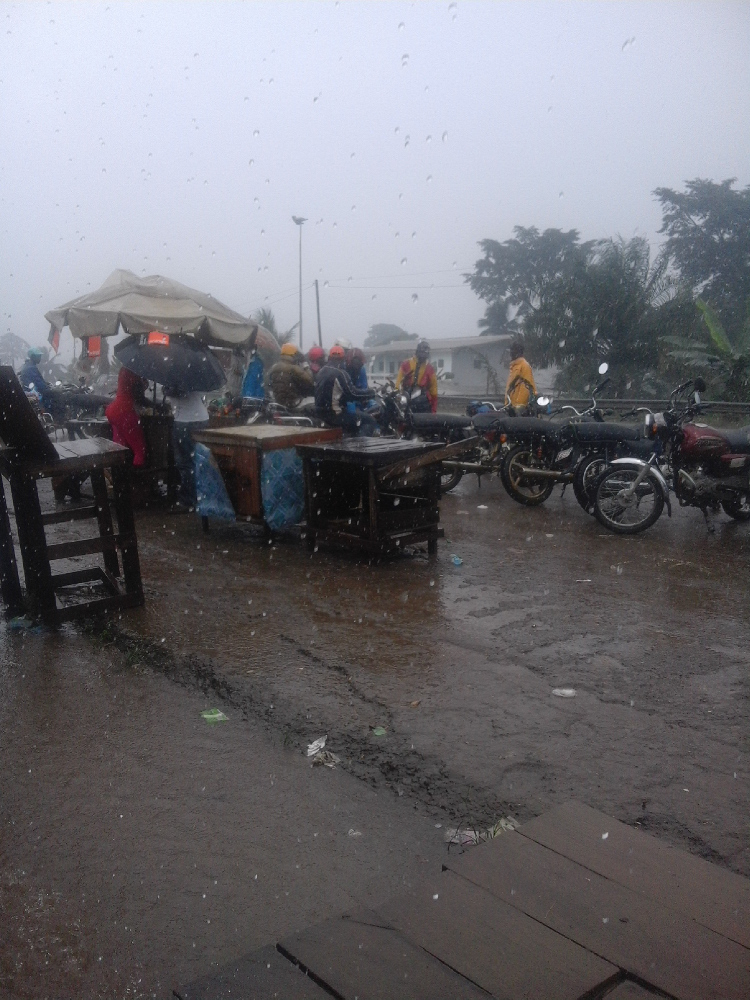 Yaoundé, the capital of Cameroon was at 750m altitude. Apart from Mt Cameroon few places were as high.

I asked the policemen at the speed trap (there really was such a thing here) where I could pitch my tent. I hardly believed what I heard. Not “Oh, it’s too dangerous here” but rather a nice “Anywhere”. On the other side was a hospital or on this side where there was a school with a family who stayed outside.

And so I ended up with a very nice family. 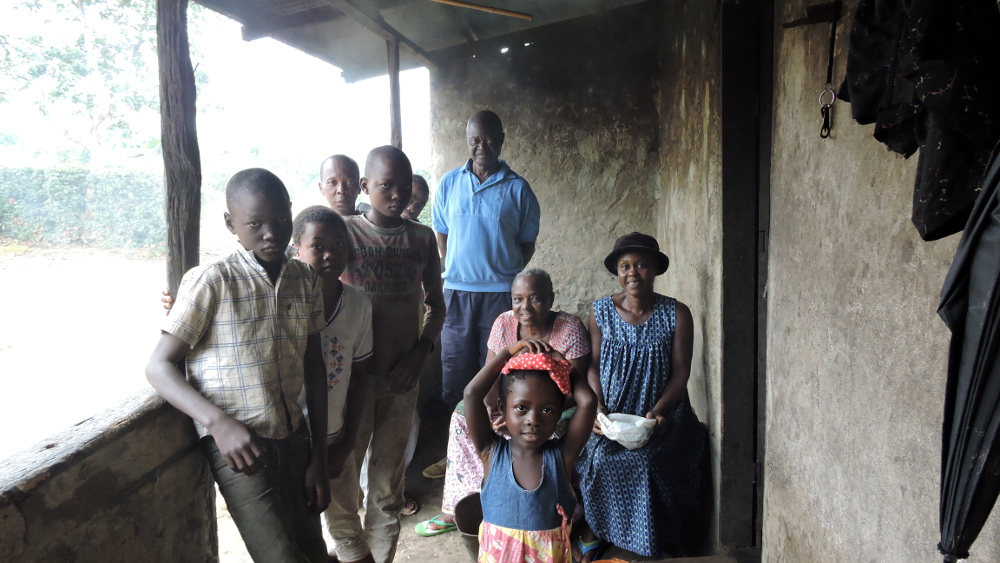 How much I had missed this in Nigeria. It was such a joy to camp with the locals and learn so much about the country and culture.

In each African country there were many local languages. Children learnt the European administrative language (English, French or Portuguese) only in school because at home they spoke a local language. That seemed to be different here. A small area close to the Nigerian border was English-speaking. My host family also spoke English. The rest of the country was French-speaking which my family also spoke. 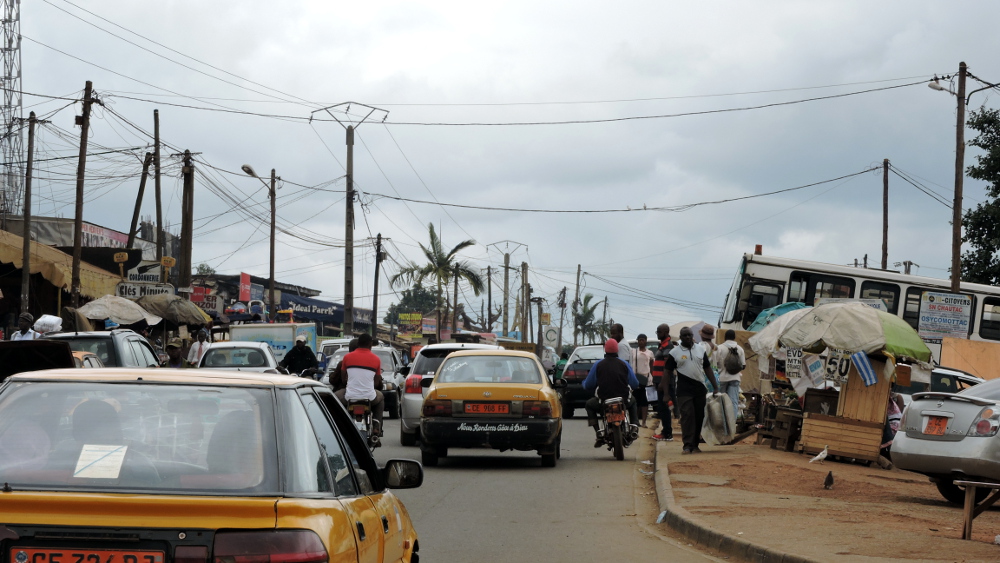 The only really nice thing about the city was that I finally met other travelers at the Presbyterian Guest House. 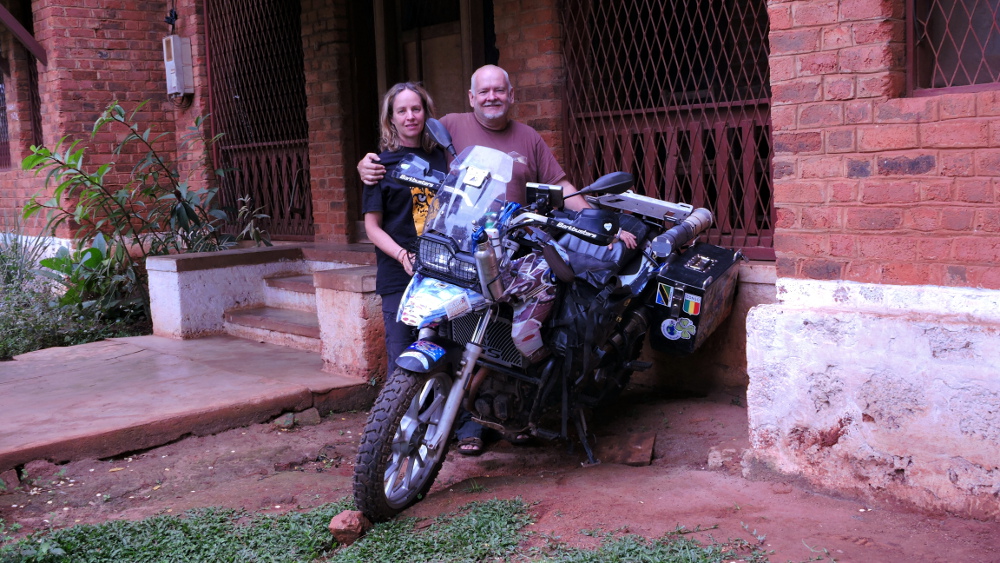 Paul and Jan from Australian have been traveling in Africa for a long time, by motorbike.

For a long time, I had missed these evenings of exchanging information over a beer.

Next day, Tuesday, I left the city. 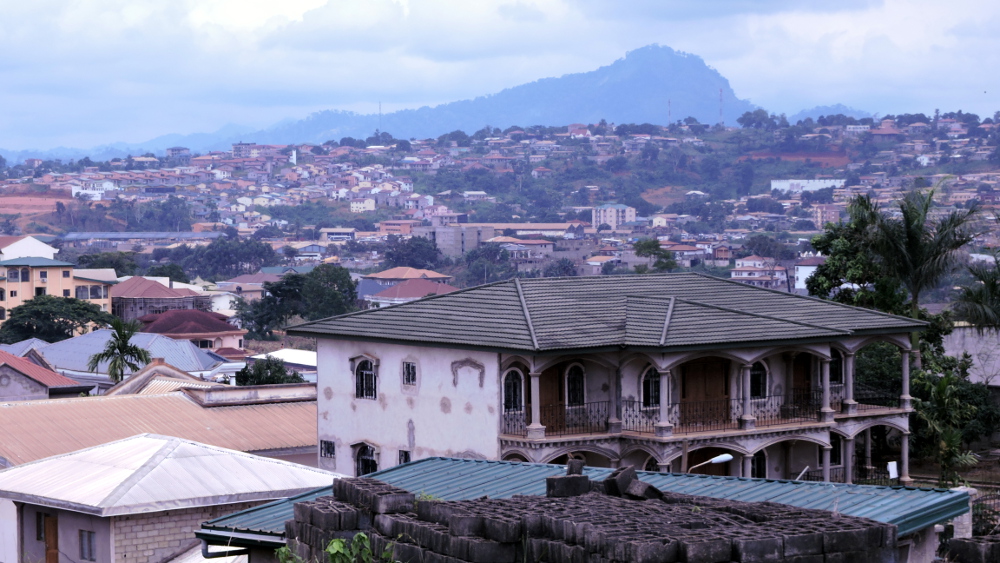 I didn’t realize that Monday had been a holiday.

On my way away from the city, I was escorted by a military vehicle. It stopped frequently, soldiers jumped off, and searched empty houses. What was happening? Shortly thereafter, a truck and I were told to get off the road. I was told I had to wait for one hour. Why? No response.

I find such things hard to understand and I resented them. How can the whole traffic be stopped for an hour? Of course, I was the only one who wondered.

Then an escort with vehicles and motorbikes front and back arrived. Now I realized. The president was on his way to work! Usually this happened on a Monday but because of the holiday, I experienced it on a Tuesday.

What kind of president needed to take such precautions to travel to work?

In other countries, I had been told to get off the road shortly before the king or president passed by. But to stop all traffic for an hour?

After they had passed, I could continue.

In the evening I camped under banana trees. 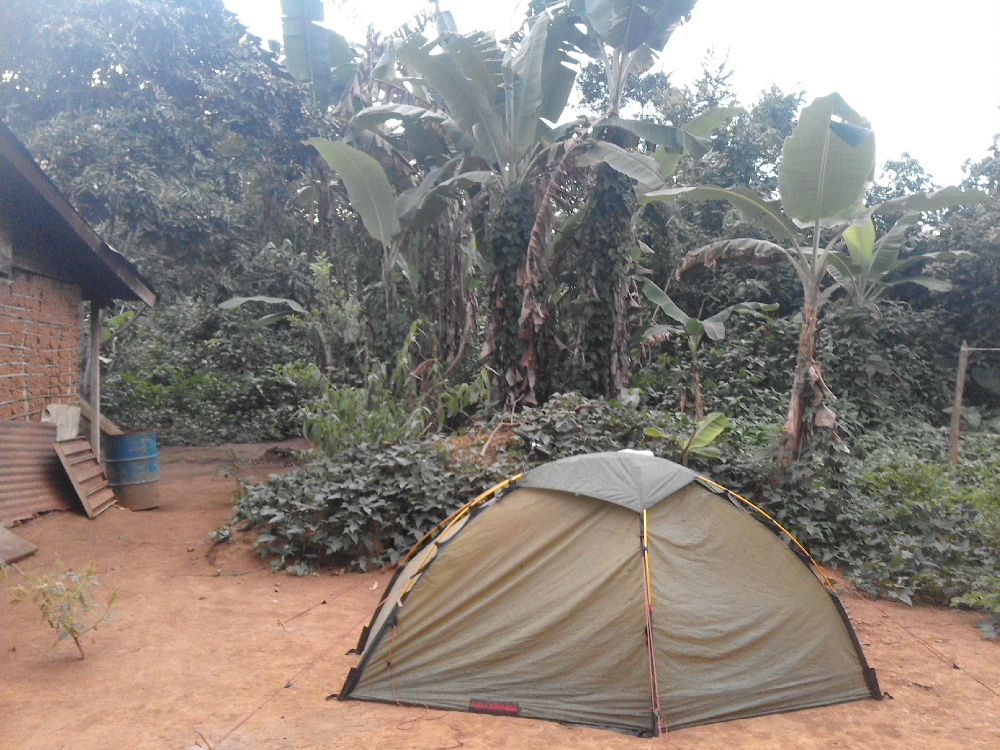 Even in Africa, children had to brush their teeth. 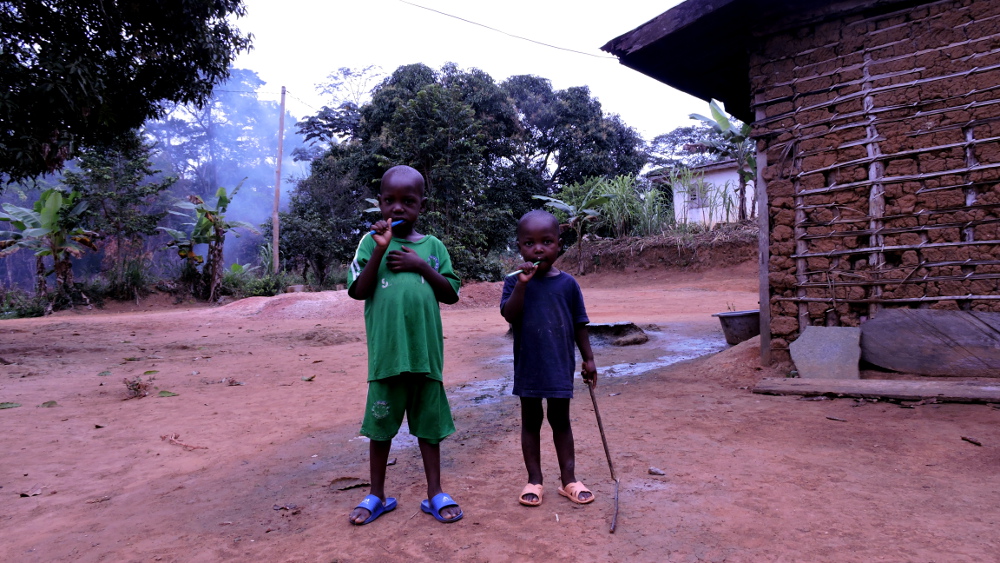 And they did it without much complaining.

The scenery wasn’t very interesting on the way to the border. It was the usually up and down in a very green landscape.

I learnt a lot during my evening with the families. 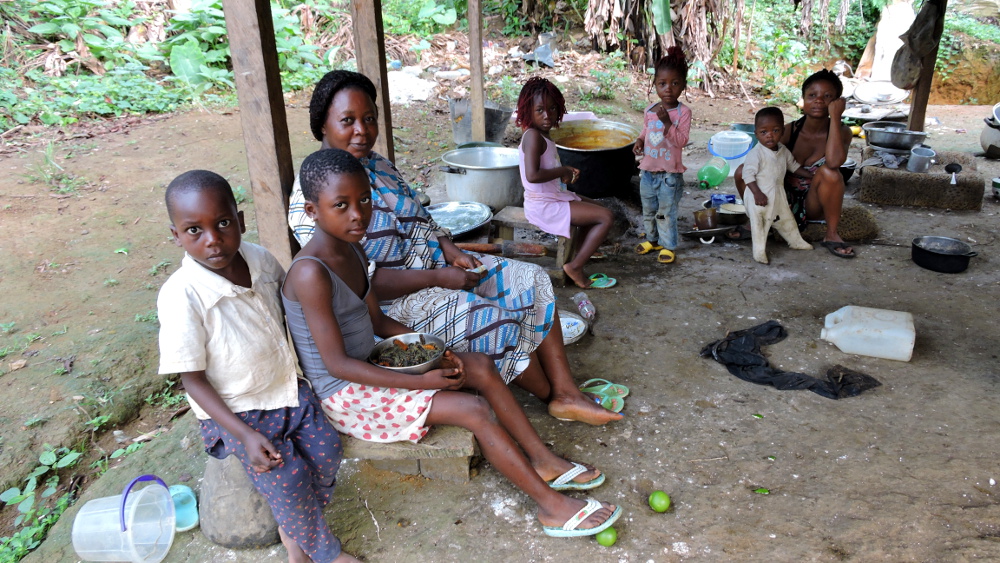 The women were sitting in the cooking area. A mother and daughters were making sauce from palm oil nuts. It was incredible labor intensive. When I had arrived, she was quickly alone until I returned with the others.

A younger daughter had a bowl on her lap. 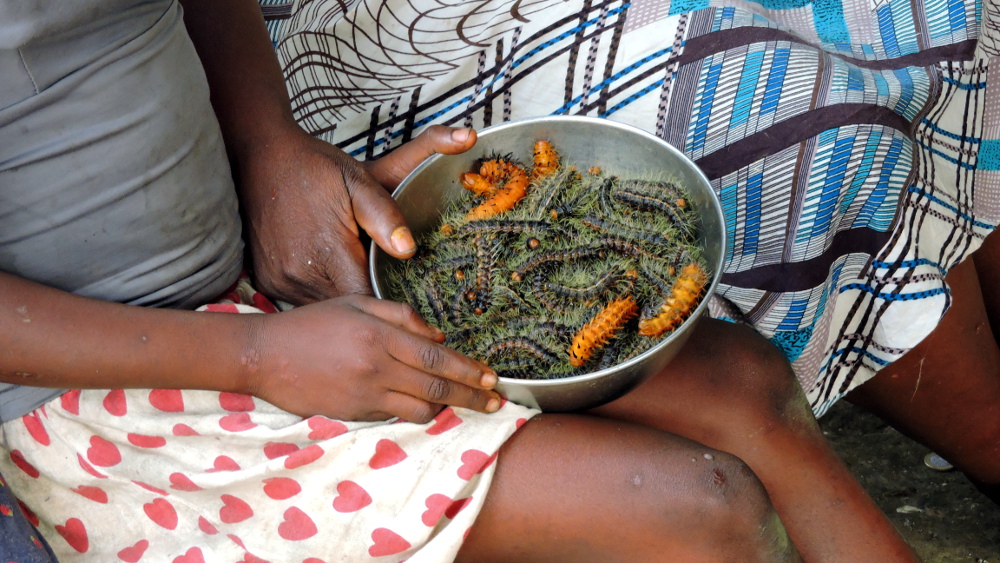 I didn’t believe my eyes! They didn’t plan to cook and eat this?

I wasn’t sure and wasn’t able to find out. They just laughed about me. I wouldn’t put it past them.

Shortly before the border, Ruben caught up with me. 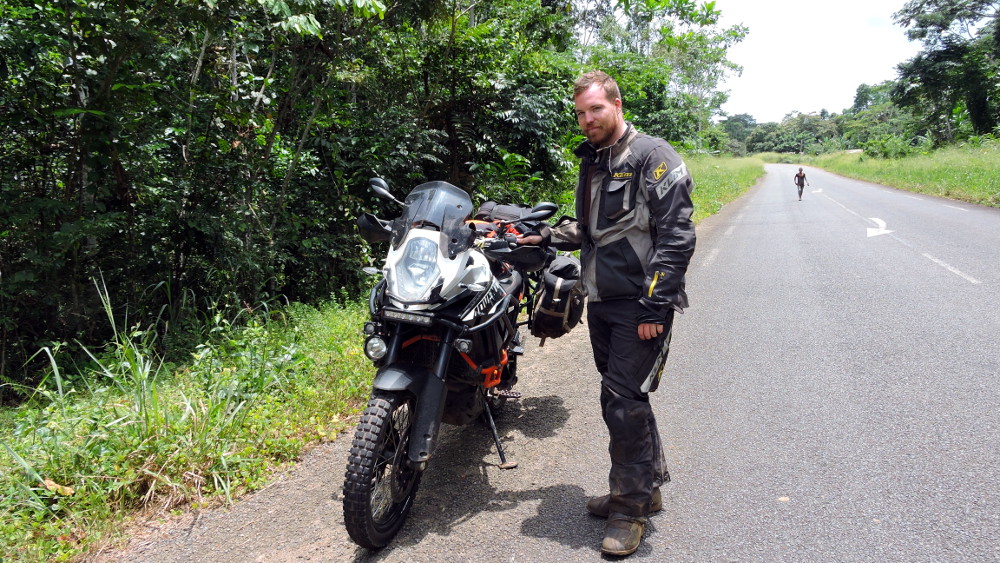 We had spent time together in Bamako, Mali. In the meantime, he had traveled to Europe to fetch his girlfriend. He had planned to travel with her but she didn’t get a visa for Nigeria. She flew and he was adventurously traveling very fast through Nigeria and Cameroon. They met up in Gabon and everything turned out well.

I was headed for the border with Gabon.

More in the next episode.