Away from game parks and lodges

Botswana is a well-known tourist destination. Not only German visitors like it because of its great animal diversity. How does it look away from the game parks and the lodges? I discovered what package tourists don’t get to see.

The entry to Botswana was fast and uncomplicated for me. I didn’t even have to pay. It was different for my cycle companion Marcelo from El Salvador. He already had to pay at the embassy in Lusaka until he was finally allowed to enter.

And still it wasn’t easy. Please tell me, where is “Salvador”. The border officials didn’t find it in their list of countries. It was called “El Salvador”. How simple it was to travel on a German passport.

After a bit of stress, Marcelo was allowed to pass the border. Foot- and Mouth disease made it illegal to import fruits and animal products to Botswana and so we picnicked at the border and ate everything we weren’t allowed to bring in.

Our joint trip ended in Francistown. Marcelo wanted to cycle straight to South Africa and I planned to go to Namibia.

His birthday was two days after mine. 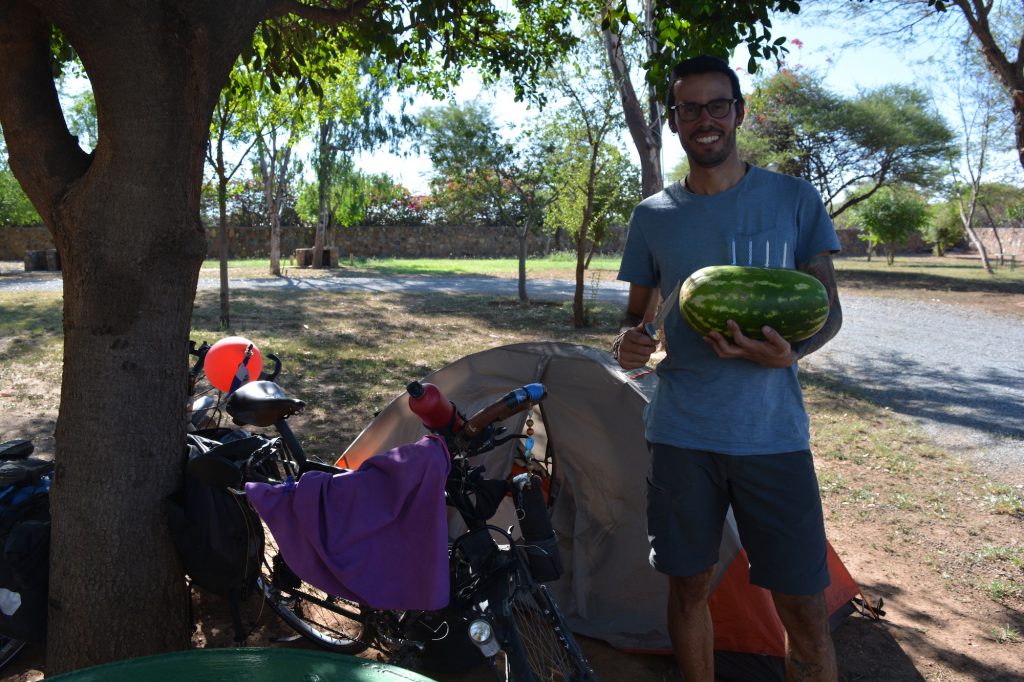 We had a birthday and farewell party. It’s unusual that I meet cyclists with whom I get along so well and for so long.

My route was to the northwest, in the direction of the diamond city, Orapa.

It was very beautiful with little traffic. People kept asking if I wasn’t afraid of wild animals. Sadly, I hadn’t seen any yet.

Villages and shops were few and far between. Therefore, I was very grateful when a driver stopped. 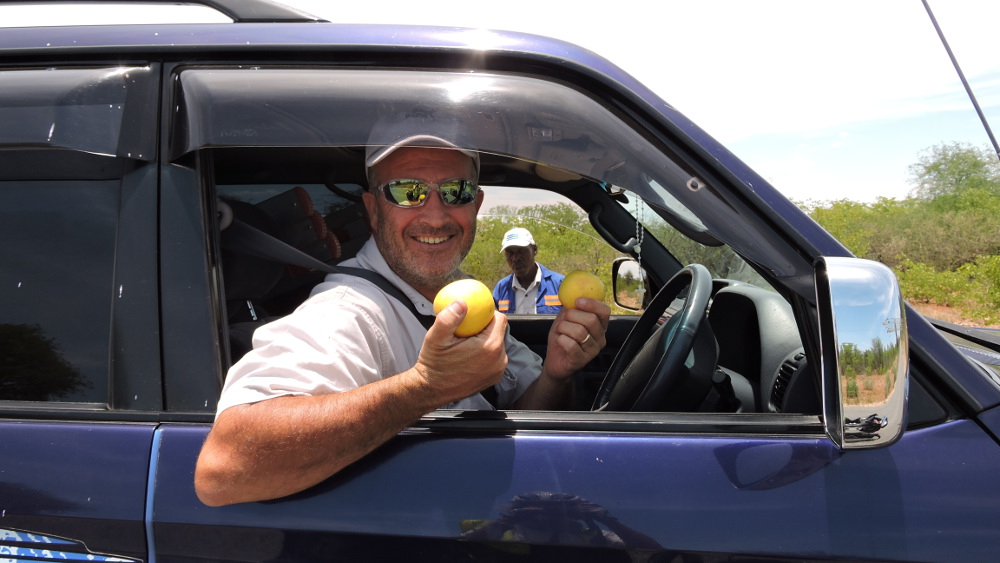 It had never happened to me in Africa and now thrice in two hours. First, this nice Argentinian offered me apples, water, and Coke. Then someone gave me water and Coke. How good I had it.

I wasn’t allowed to enter the diamond city and had to make a big detour. 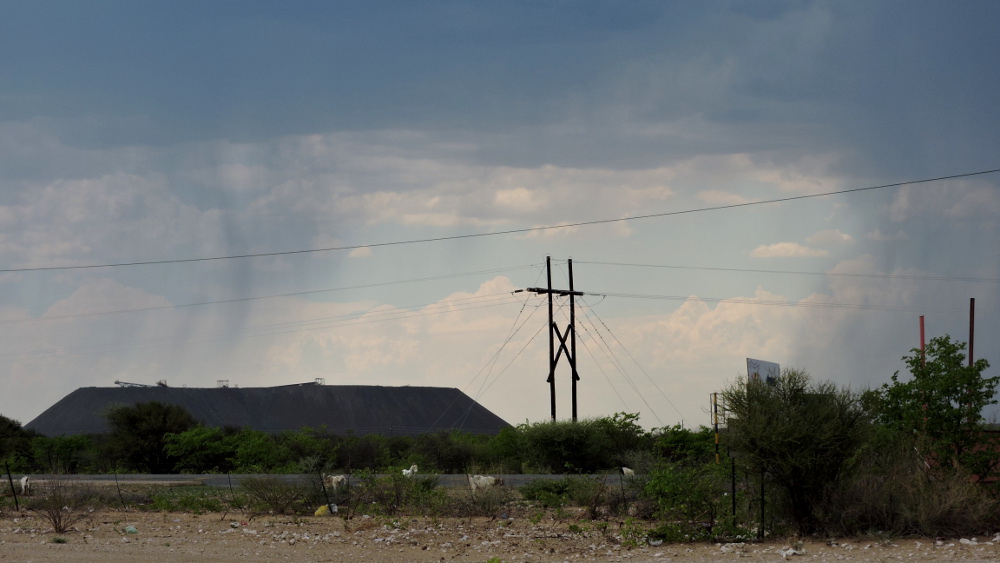 It was probably for the better after I had seen the vehicles there. 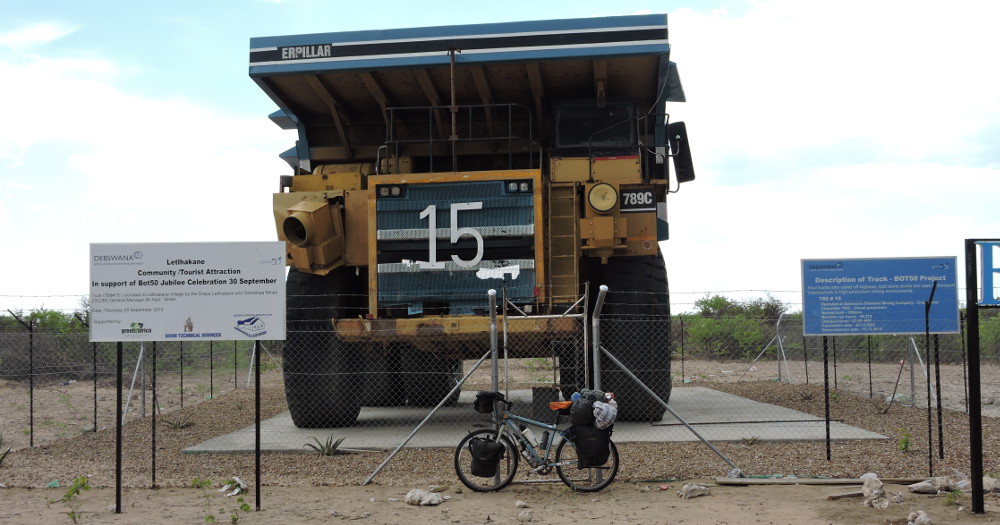 There was supposed to be a supermarket in Letlhakane and I went on a longer detour to find it. Here I only saw blacks and coloreds. It was an unkempt, dirty, and noisy place. There was a guard in front of the Spar supermarket and he looked after my bike. I quickly shopped and then was glad to be on my way.

For months now, I had been in countries where there had been only blacks and coloreds. But it had never been as unpleasant as here.

What a contrast to arrive at beautiful campground six kilometers away. 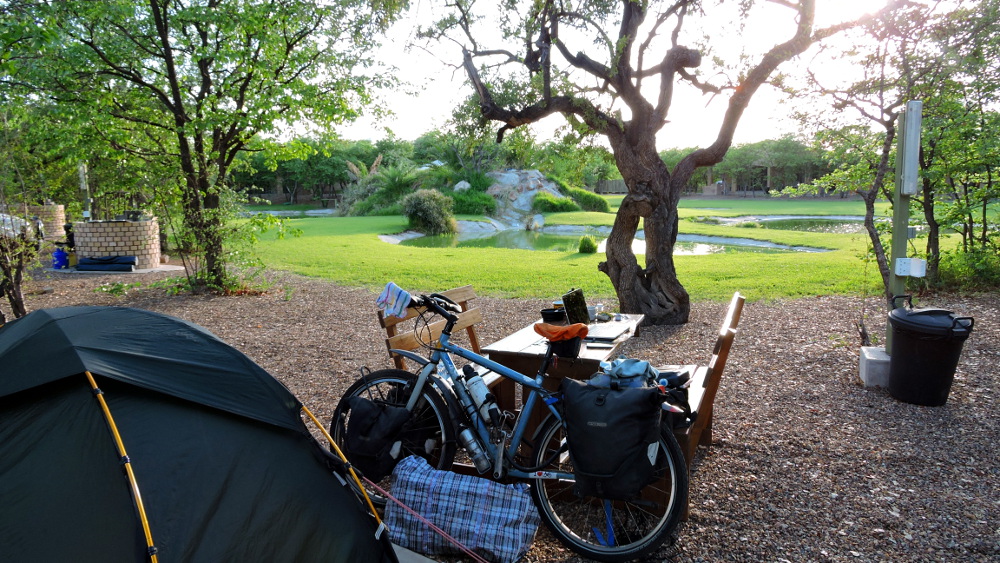 The road along the salt pans was flat. 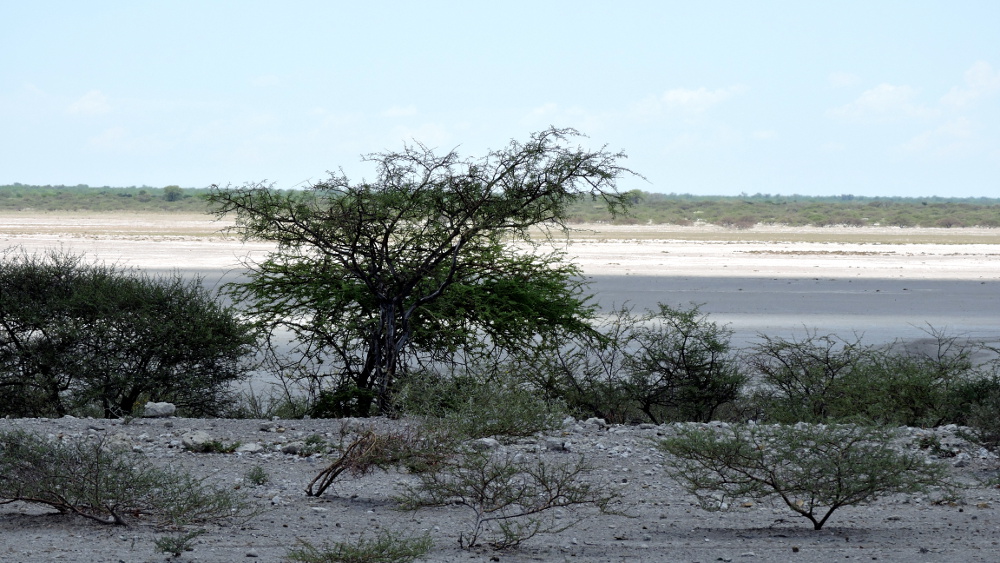 Another contrast. Hardly any green and virtually no water. 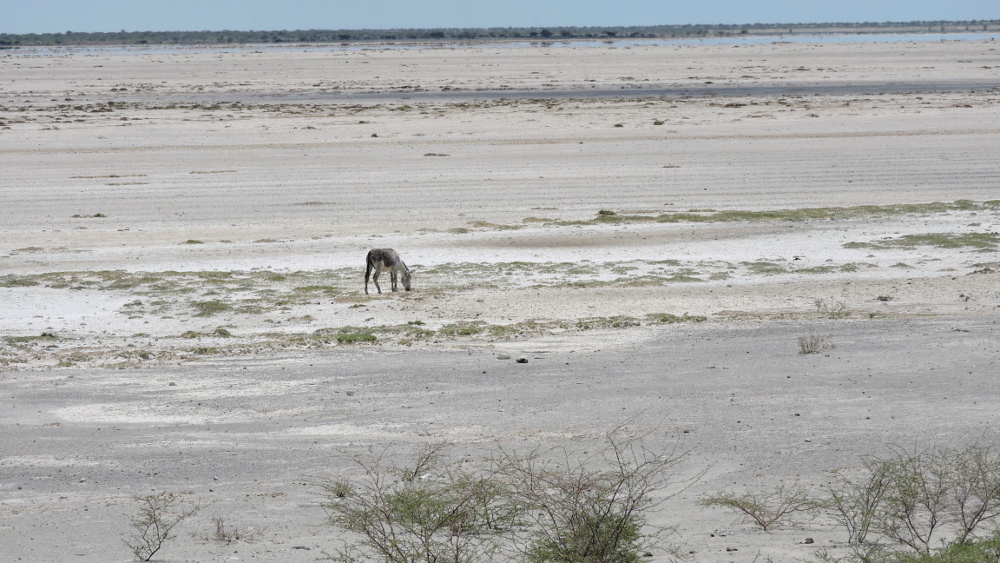 But a lot of donkeys. I hadn’t seen as many donkeys anywhere else. There were some cows which were very skinny. What should they eat in this aridness? 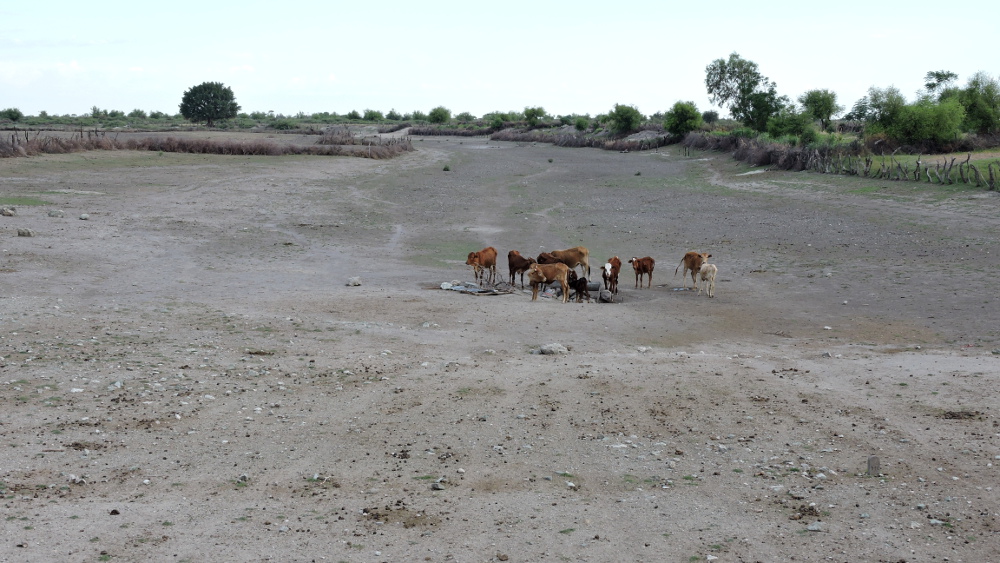 This is the Boteti River, one of the largest rivers in Botswana.

A storm picked up and I took shelter between some huts. Here lived farmers who owned a few cows. I wondered why they needed so many donkeys. Some were used for transport.

When I saw the water in the canisters, I didn’t ask for any. It looked grey.

The people didn’t have much. A young woman of about 17 years had her own house. It was a room of 2.5×2.5 meters and contained a bed and a lot of bags with clothing. She shared the house with her little brother and cousin. 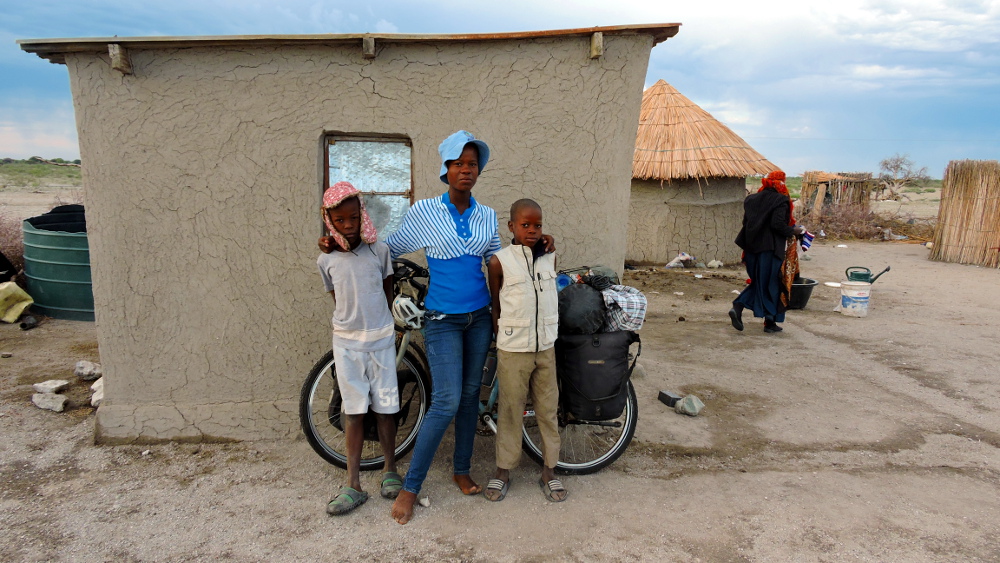 There was no running water and no electricity. What a contrast to the world of the tourists who drove by in their big vehicles and stayed in lodges.

Because the area was so sandy and desert-like, I remained on the paved road. I had been deeply affected by my experiences in Angola and Zambia. There was a strong wind and I was glad for the shelter of this building when I discovered a flat tire. 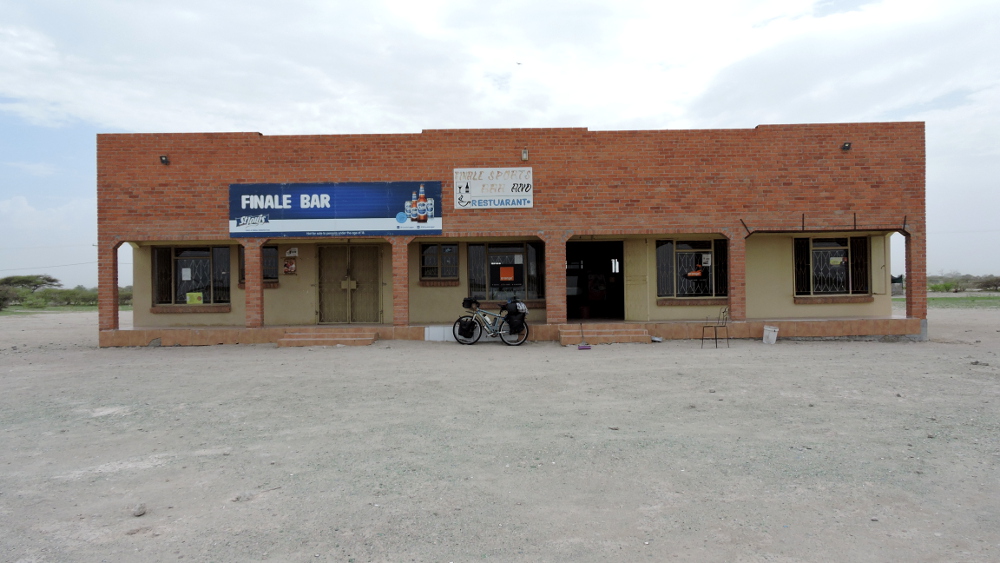 Away from the sand and wind, I could take my time to fix the tire.

There were no stores on rural road A30 and therefore I rode towards Rakops. And what a sad sight: the shelves were almost empty. And only tomatoes and onions for vegetables.

German tourists in a rental car were desperately looking for diesel fuel.

If one continued, the road went passed the Kalahari. 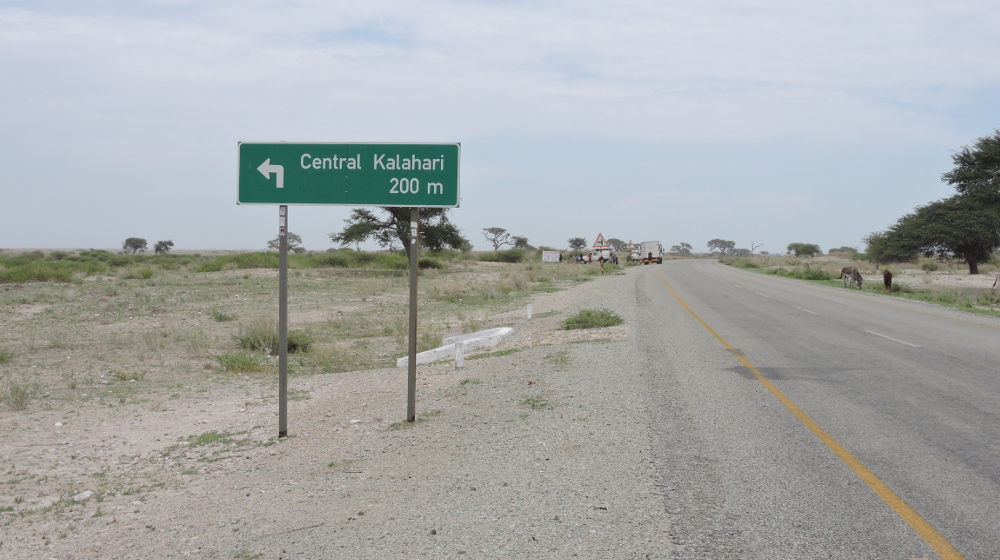 I didn’t feel like turning off because of the sand and a few rental cars and overland trucks which went there. 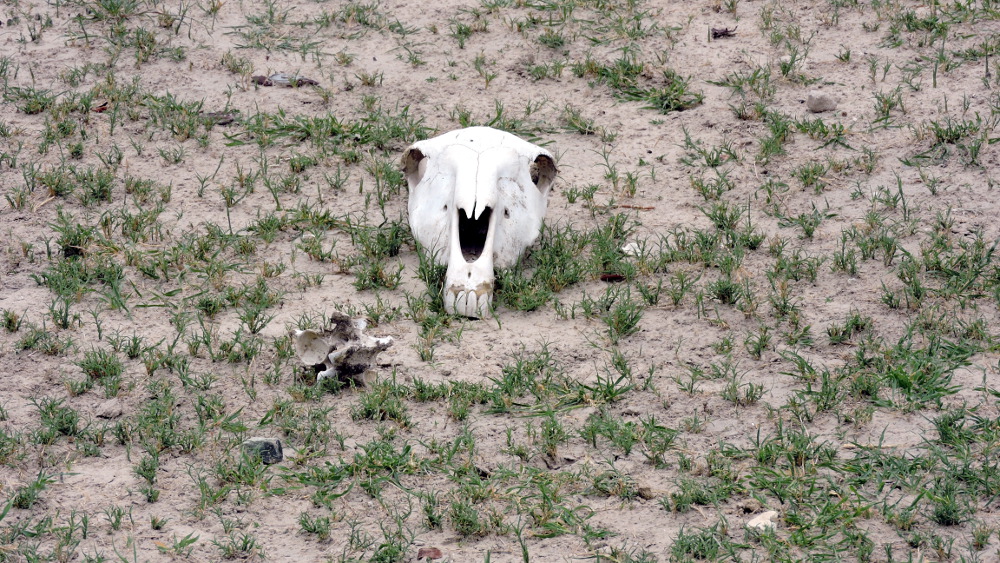 The vultures were waiting. 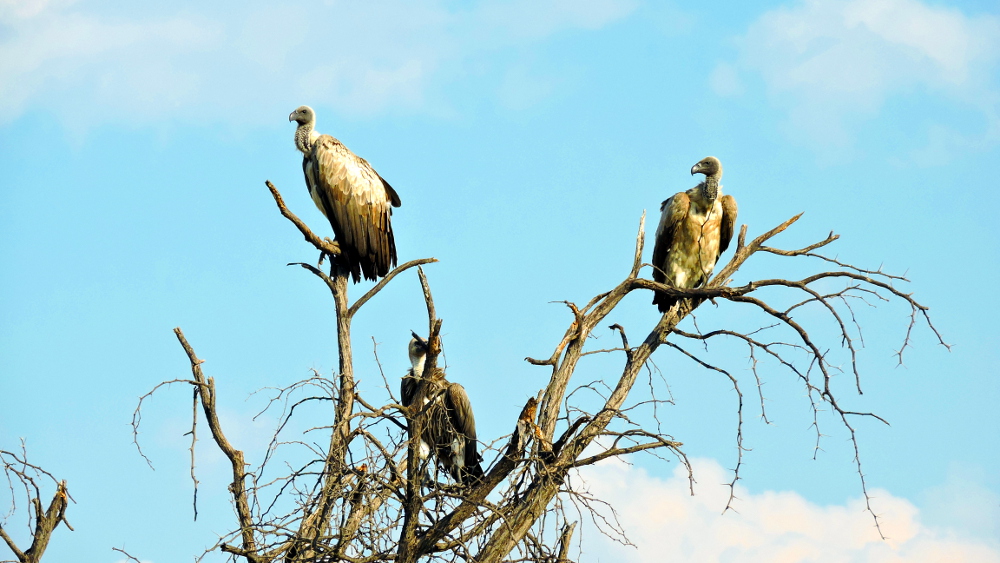 From the road it looked as if there were no people in this area. However, when I stopped for a quiet break, I wasn’t alone for long. Behind almost every bush, there was a hut. 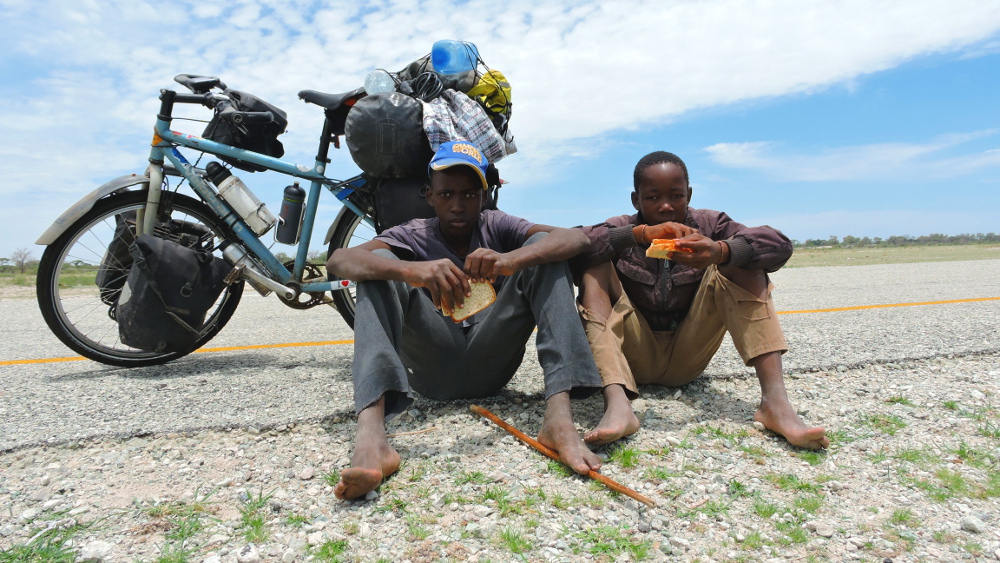 But I was a lot more interesting and I had something to eat. They said they were hungry. There had been hardly anything to buy and I only had bread left. They each got a few slices. They sat down quickly and ate the dry bread. They must really have been hungry.

I was asked constantly if I wasn’t afraid of wild animals. They had in mind elephants, lions, and whatever else. Elephants let me be if I did the same. I hadn’t seen any lions and didn’t think I would.

No one warned me about these cute little animals. 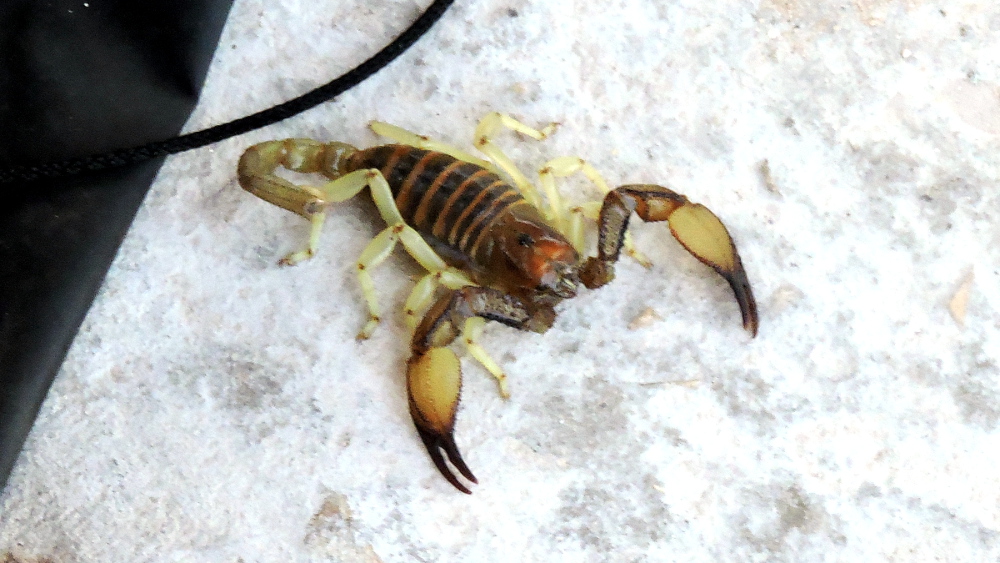 These I found a lot more dangerous because one didn’t see them and they were in hiding everywhere. You just had to carelessly pick up a stone. This one sat under my tent. Fortunately, I noticed it right away, when I broke camp.

A night at a police station also showed how poor people were. 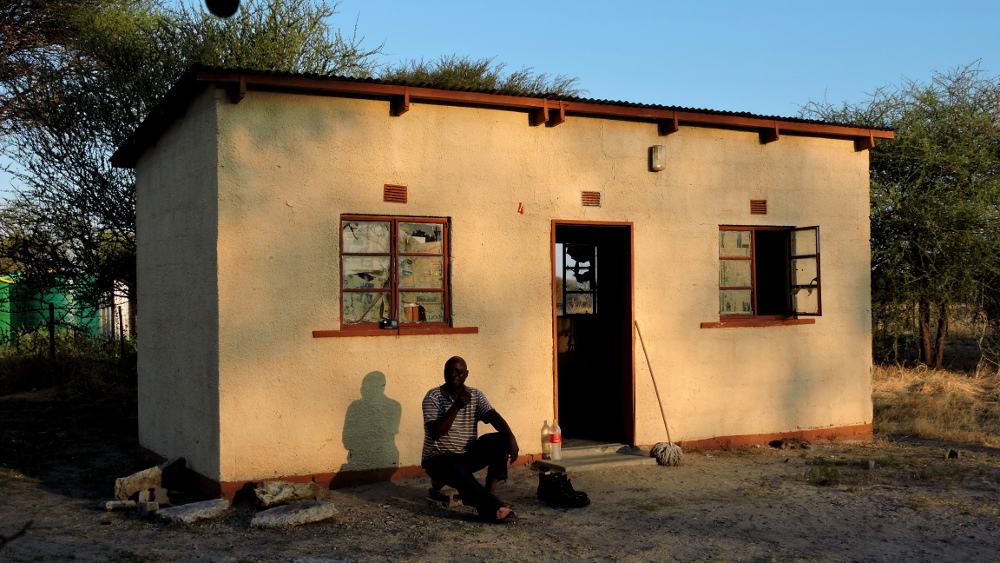 I’d have never thought that these houses were inhabited. There was paper for windows. But in every house, three or four policemen stayed. Some hat electricity but no running water. Toilets were on the other side of the road.

All were very friendly. A policewoman organized a bucket shower for me.

A policeman was very agitated that I toured alone by bicycle in an area which was filled with lions. I still hadn’t seen any and neither had he.

I wasn’t far away from Maun where I wanted to stay for a few days. It was the entrance to the Okavango Delta.

There is a separate blog entry for this interior delta which is very famous for its unique fauna.

I had a special experience with animals at the camp site.

The camping spot was nicely covered which was very practical when it rained. 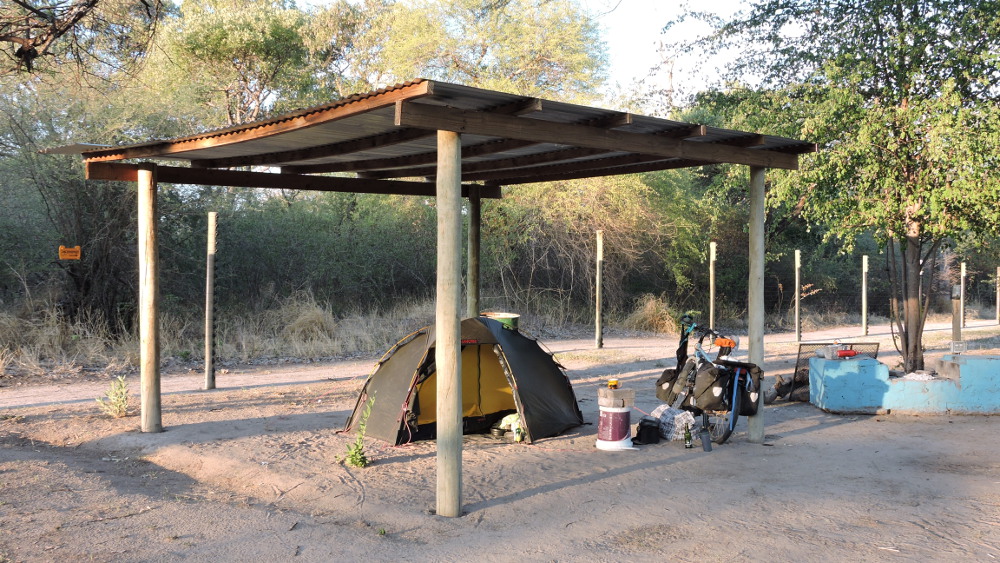 Unfortunately, the roof didn’t deter the monkeys. They chewed through every bag and the peanut butter jar. 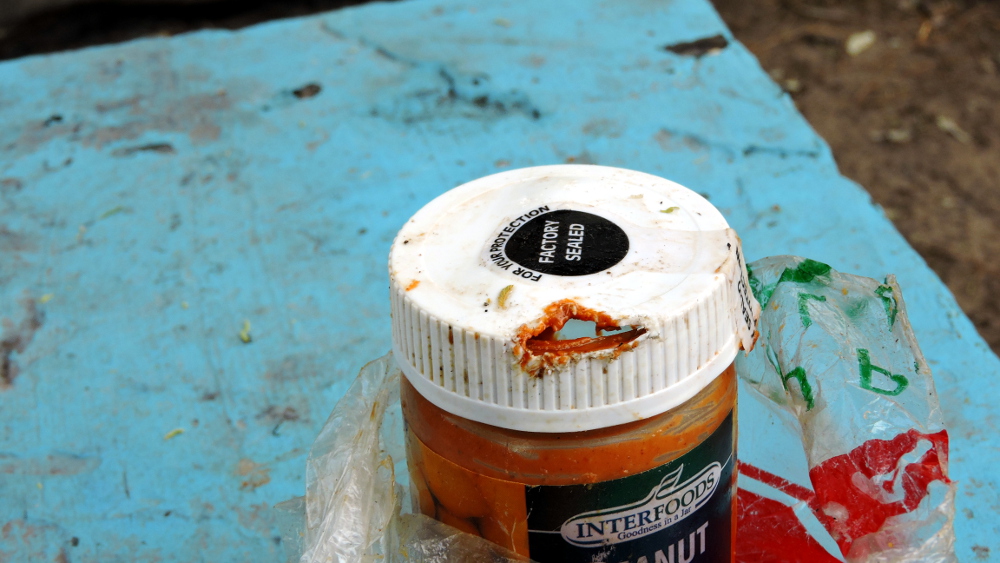 They went crazy at the garbage bin 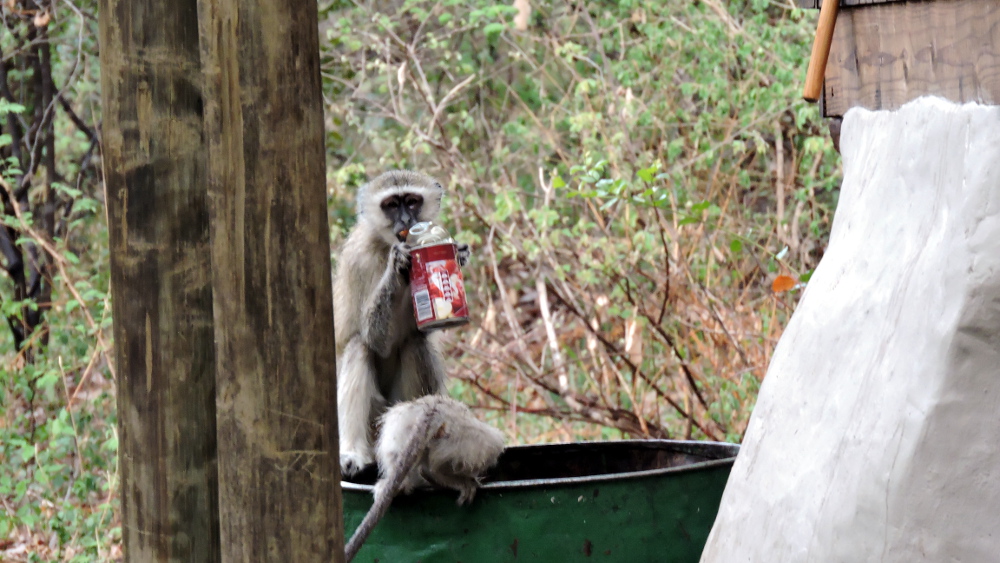 And then the garbage flew about everywhere.

From Maun I continued to the north, west of the delta. More animals crossed my path. 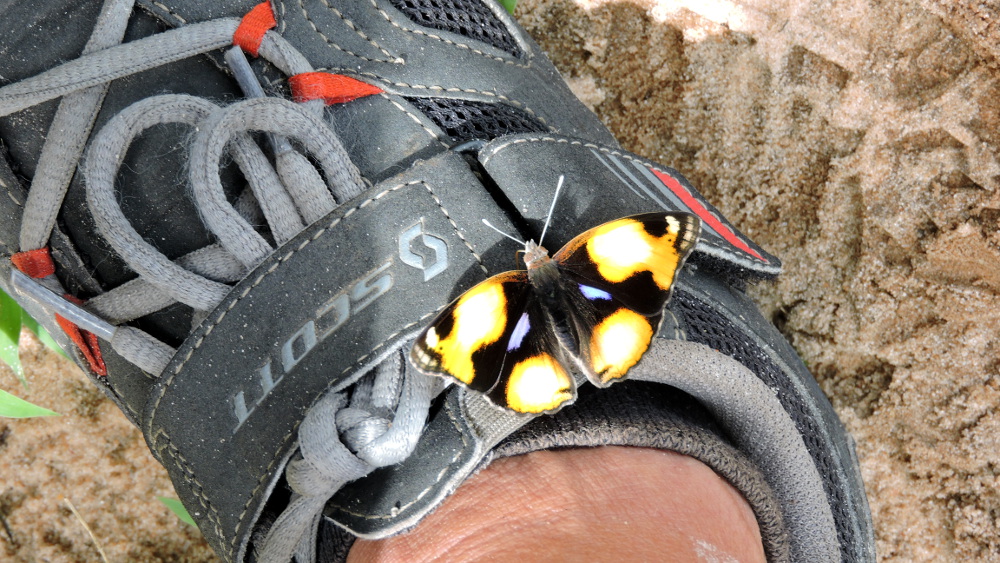 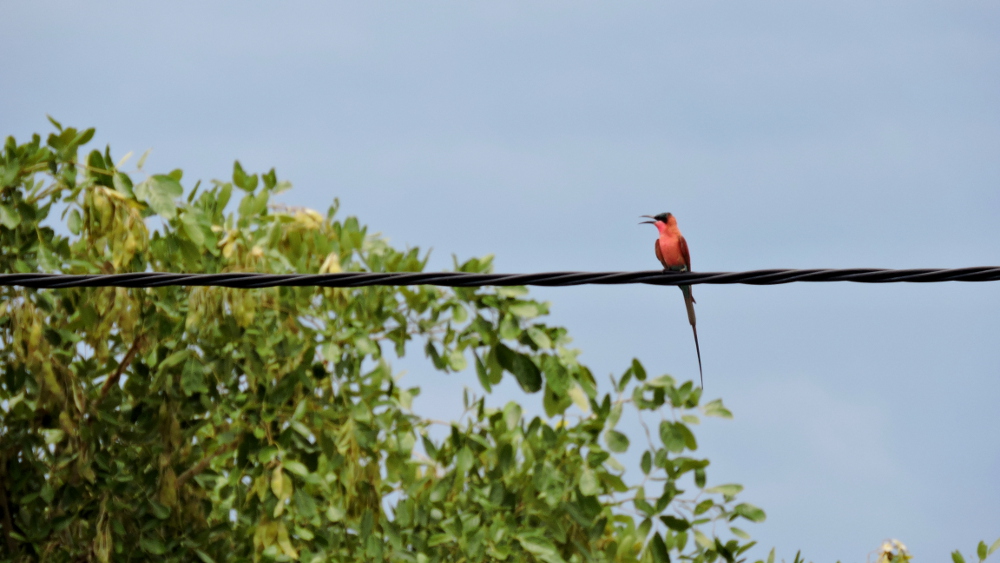 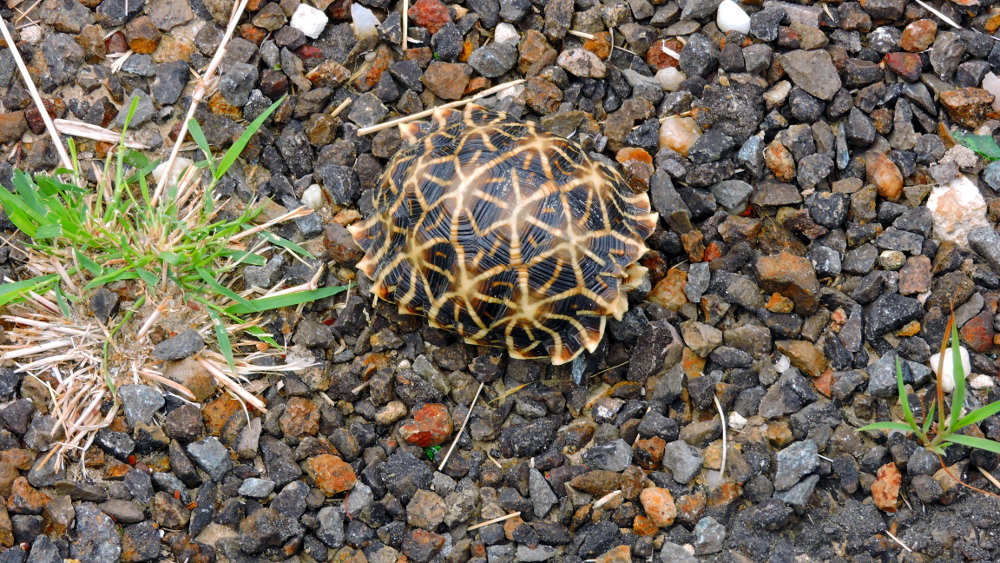 Did you know how a dung beetle rolled the ball?

Quite fascinating what one learned on the road.

Apart from that not much happened on this flat and even road. 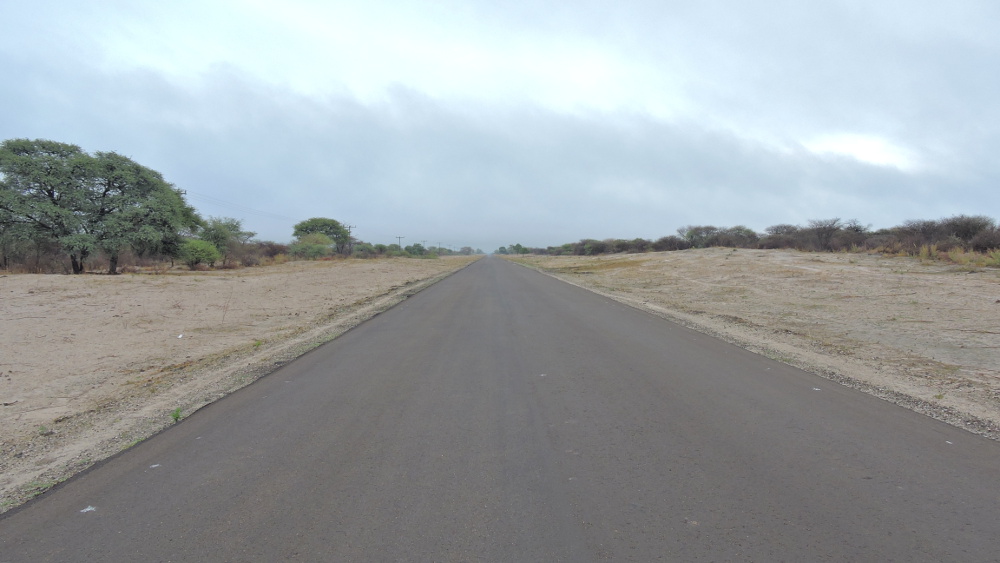 I camped at clinics or schools.

I was always surprised that there was so much traffic in the small towns and nothing outside. That meant that people only drove short distances in the towns which they could have done better by bike.

The doctors and nurses said if one had a job it was important to have a car. A nurse would rather take a taxi than walk one kilometer to get home. 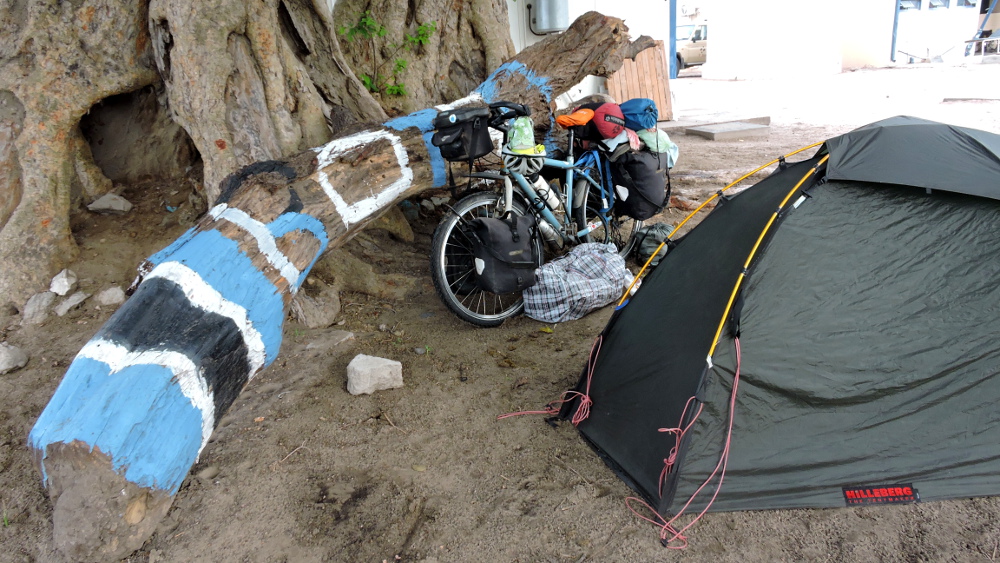 The advantages of a bike didn’t correspond with societal expectations.

I was therefore very surprised when a doctor told me the next day that he had thought about it and would buy a bike.

It was vacation time and the school grounds were packed with tents. 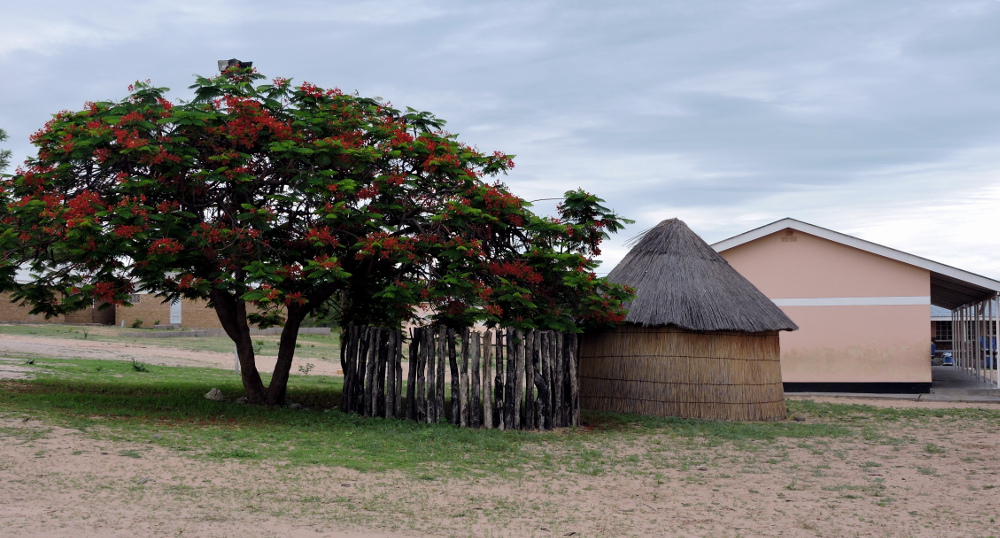 Workers stayed there who worked for the veterinarians and vaccinated the animals against foot- and mouth disease. A lot of cows roamed free and it must have been difficult to vaccinate all of them. The workers laughed and said they might get 60 percent.

The rainy season was late and there were amazing cloud formations in the sky. 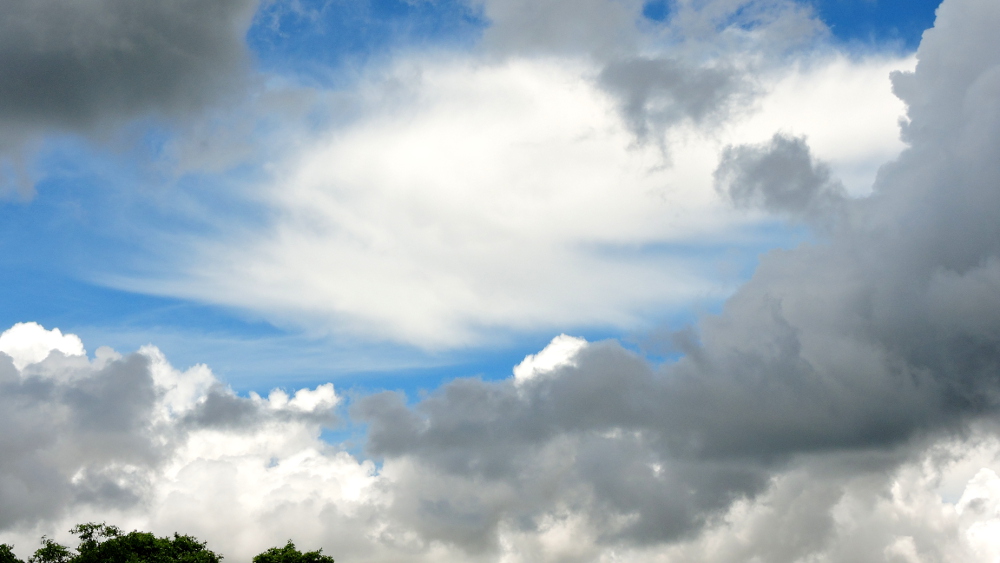 I was lucky to miss most of the rain.

Before I left Botswana, I stopped at the Okawango River. 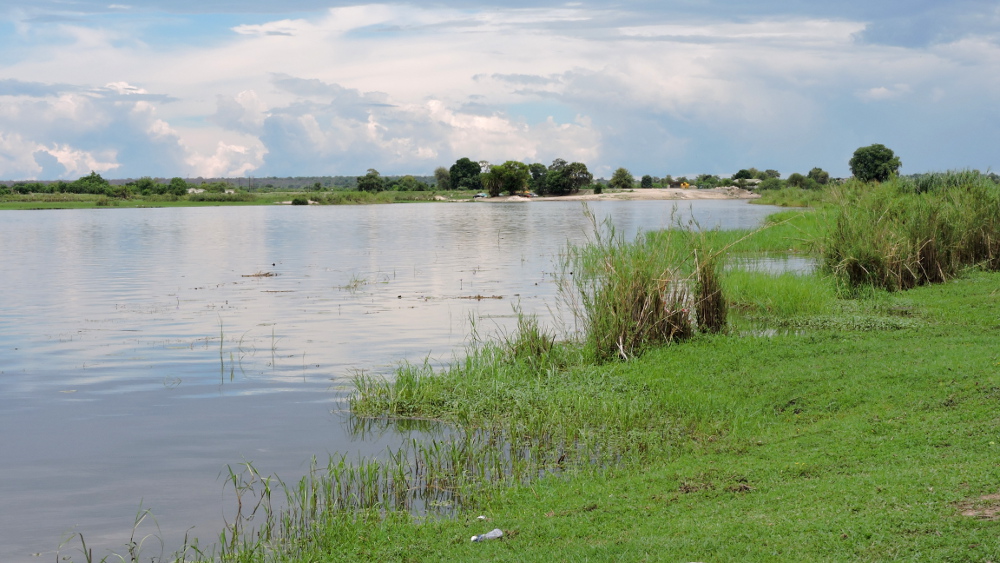 I looked for crocodiles. Everyone had told me there were lots of them but I hadn’t seen any yet.

I was curious what Namibia had to offer and what animals I’d see there.