Startseite » Africa tour in English » Again Senegal and The Gambia

Senegal – The Gambia – and hopefully Senegal for the last time

The bus trip from the Malian border to Dakar was okay and I only missed a few hours’ sleep. I had the weekend ahead of me to decide how to continue my journey.

The remainder of the night I stayed in a room at the police station at the bus terminal. And I was cold! How happy that made me! Finally, the temperature was pleasant again. The difference in temperature was probably 15 degrees. That confirmed my decision not to proceed to Mali but to stay on the coast.

Before joining the crowds in Dakar, I made coffee for the policeman on duty and myself on the camping stove.

And then I took it slowly. 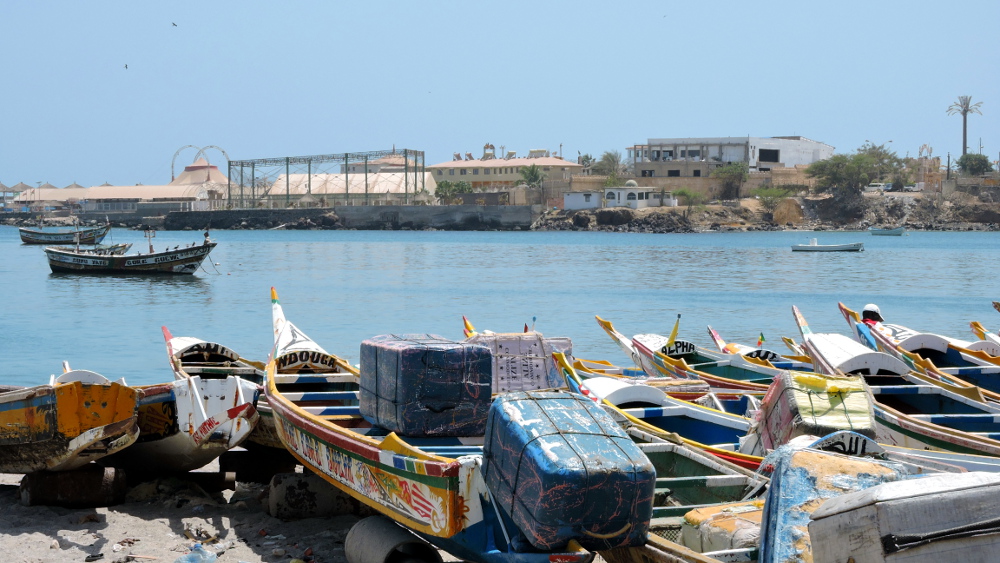 First, I needed to find accommodation. Thanks to JB’s internet site, I found the orphanage of Dakar which rents out rooms to finance its operations. Typical for Dakar, it wasn’t cheap but it was for a good cause. And it was very nice, quiet, clean, and I learnt a lot about their work and the situation in Senegal.

If I didn’t want to go to Mali, then the next countries were Guinea Bissau and Guinea, Conakry and I’d need visas for them.

Sunday was 1st of May and on Monday I could finally go to the embassies. I easily found the embassy of Guinea Bissau but the security guard informed me that it was closed because 1st of May had been on a Sunday. Damn!

Twice a week, on Tuesdays and Thursdays, a ferry travels to Ziguinchor in the south of Senegal. I had already covered part of the journey by bike and therefore liked the ferry option. I had hoped to take it on Tuesday.

Unhappy and with little hope that it’ll be different at the embassy of Guinea Conakry but I nevertheless went looking for it. That was a bigger challenge because it had moved. A few kilometers from the old one and in some side street.

It took me 90 minutes to find it. And what I had feared turned out to be the case. The guard informed me that they didn’t work today but added: the person responsible for the visa section had gone to the dentist and would be right back.

I didn’t have anything else to do and waited.

He returned and was happy to help. First, he said, I could collect the visa on Wednesday. I whined a bit that I had hoped to take the ferry the next day. And then he said the visa would be ready at noon the next day.

Before I left, he said the one responsible for signing was also there. Maybe it could be done today. Was there light on the horizon and maybe it’d end well? I asked, how long he’d be there. Until noon and therefore I could wait at the café across the road.

Ten minutes to noon my phone rang. The visa was ready. I could hardly believe my ears but it was really true. I probably paid a premium at 100 Euro but the visa was valid for three months.

Next item on the agenda: ticket for the ferry. And a chaotic tour of Dakar to get there.

Hard to believe that drivers, taxi drivers and passengers endure this day after day. The streets are jam packed, endless traffic jams, chaos at every intersection. I barely managed to get through on the bike.

If everyone who only needed to travel a few kilometers, would go by bike, the city would almost be paradise!

Right at the entry to the port I asked a about the ferry to Ziguinchor and was told the earliest I could expect to leave was 10th May. It was 2nd May. Absolutely nothing to do about it. For the time being, cars weren’t allowed to The Gambia which was right in the middle of Senegal. To reach Casamance in the southern part of the country many people therefore took the ferry. Therefore, it was completely overbooked.

I had made up my mind that I wanted to leave the next day. If not by ferry than by bike. I could get the visa for Guinea-Bissau in Ziguinchor. To be on the safe side, I called ahead to get confirmation. It would be unbelievably bad, if it wasn’t the case, and I had to return once again to Dakar.

Now I only wanted to get back to my oasis of tranquillity and the quiet with the sisters. 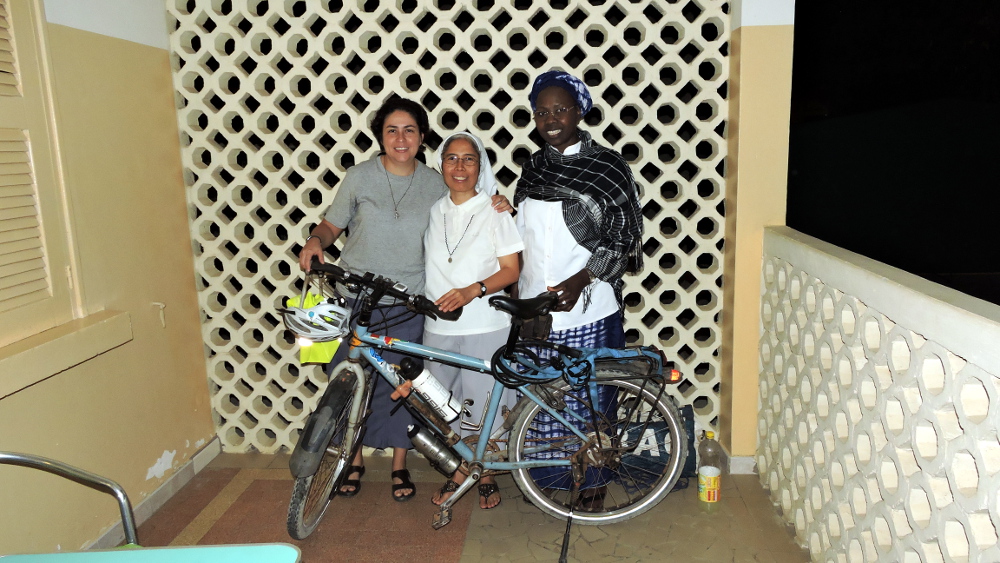 In the evening I had a visit from Sister Charité from the Philippines, a sister from Columbia, and an African sister. They wanted to hear the details of my story and it was very entertaining. I had already visited Columbia and the Philippines by bike and we had a lot to talk about. They were so happy, they gave me gifts and an antibiotic cream for a wound. Almost sad that I had decided to leave tomorrow.

This time I headed strayed for The Gambia. Once again, I stayed with families. Often there were 30 people and 2/3 of them children. 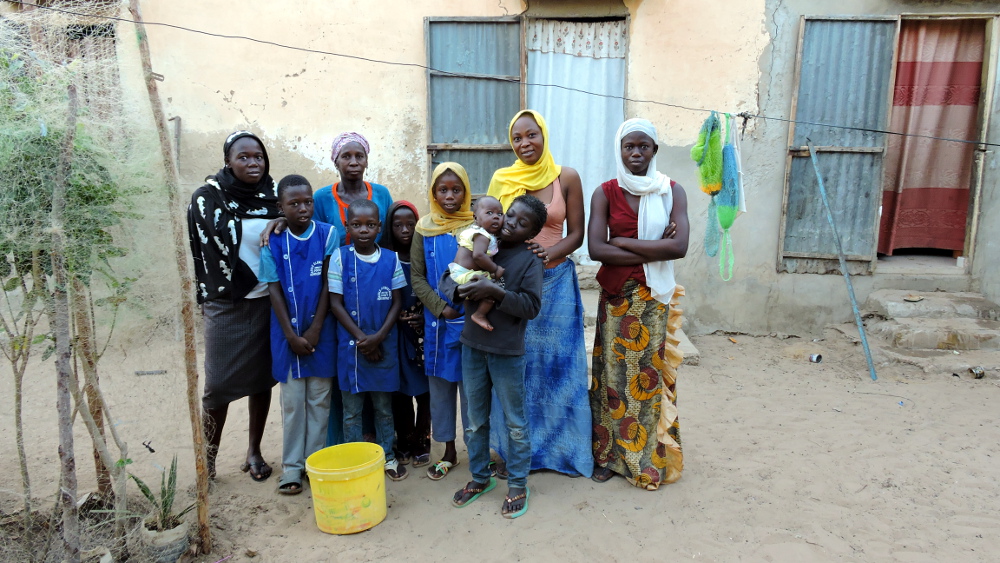 I enjoyed this diversion when I had spent the days by myself. During the daytime, I sometimes don’t feel like spending a lot of time with the population. It was too hot and I wanted to be left along. It was more relaxed in the evenings.

When I saw how closely people lived together, I wondered how refugees could stand the isolation in Germany. I met a woman who had lived for several years in Italy with her husband but then she returned to be with her family. Her husband is still in Italy. Her kids were born in Italy but are now with her in Senegal.

Later on, I met a man who was married to a German and lived in Leipzig. He was in Senegal for three months to visit his family in Senegal. I asked him if he liked it in Germany but his “Yes” didn’t sound very convincing. The phone call with his wife was reserved and quite a contrast to his lively behavior when women from the village came to the house.

It was all rather complicated. When they were in Germany, it was like paradise and it’d be hard to admit that it was otherwise. Sadly, the reality in Germany is very different from the image they had. I should really write a blog about it.

I continued to The Gambia and the traffic was awful. Much worse than I remembered from the first time. It came to an abrupt halt when I turned off to the new road to Fatick. And suddenly it was so quiet, with hardly a car on the new road. But plenty of cows! 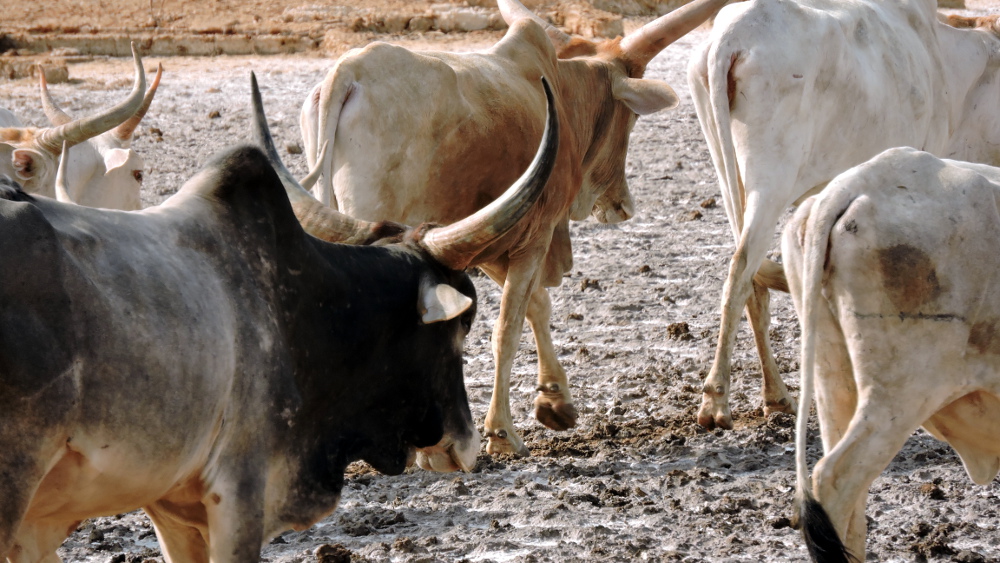 And then I was back in the Saloum Delta, this time a bit more upstream and easterly. 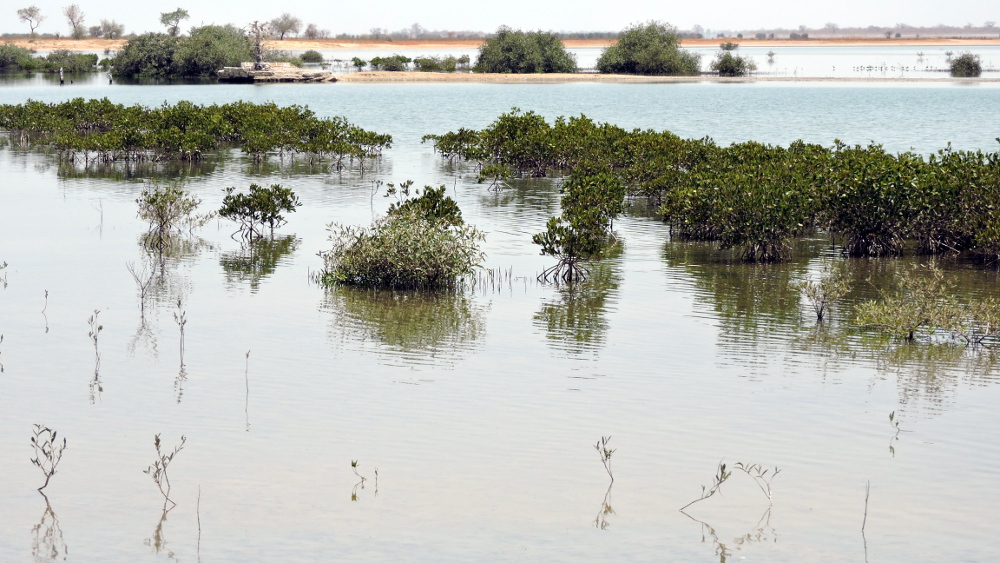 With more water birds, including pelicans. 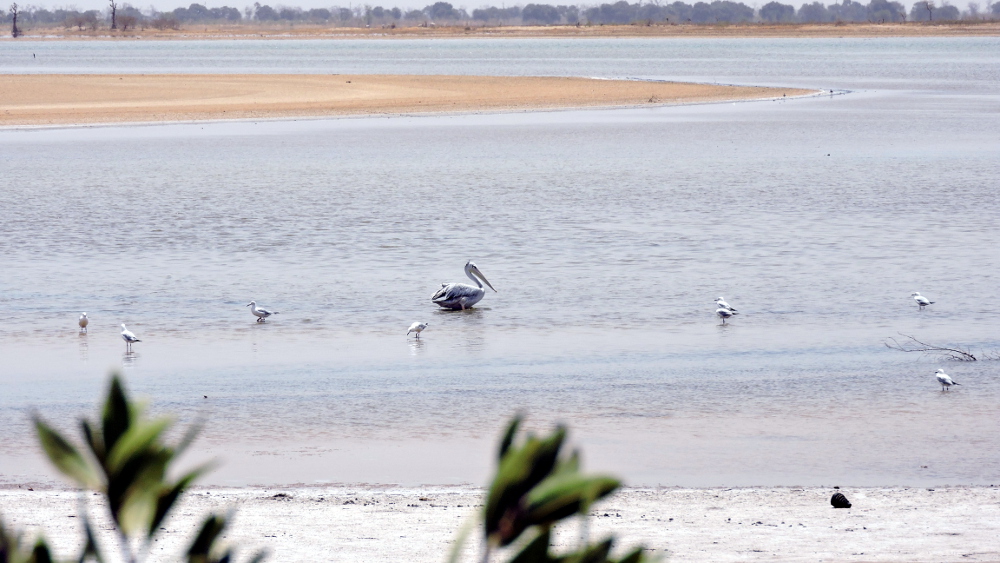 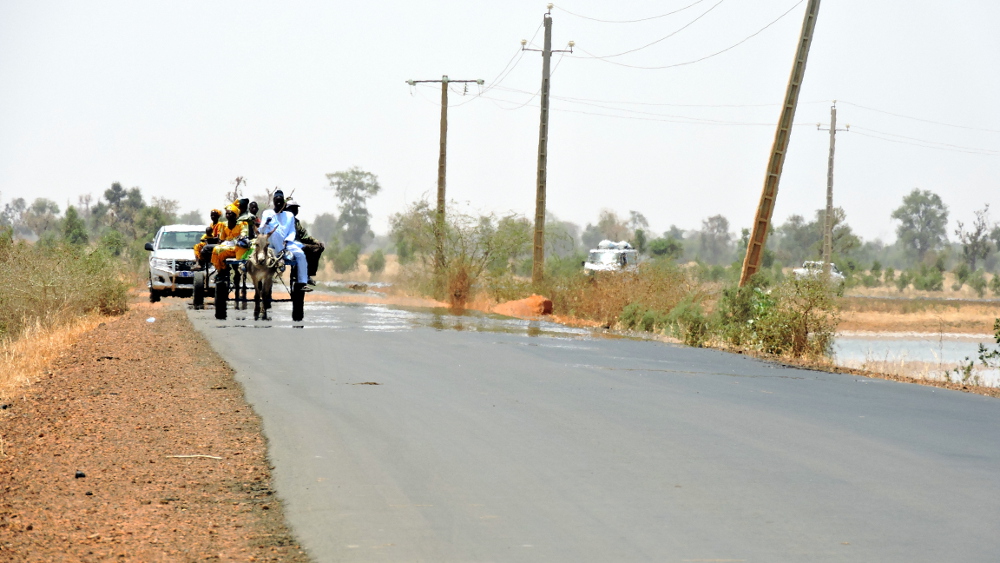 This time I crossed the border at the capital, Banjul. What a difference with my first crossing at Farafenni. This time I didn’t need to pay for my visa but my bags were searched. They were especially interested in drug and I had to produce a prescription for everything. Fortunately, I still had the prescriptions from the hospital and for the malaria drug Malerone they accepted an information sheet in German. I had suppositories for nausea and vomiting but after I explained about suppositories they were no longer interested.

It went okay but I always find it difficult to keep my temper in such situations. I’m managing better nowadays, otherwise it’d have been more unpleasant.

After the Gambia River 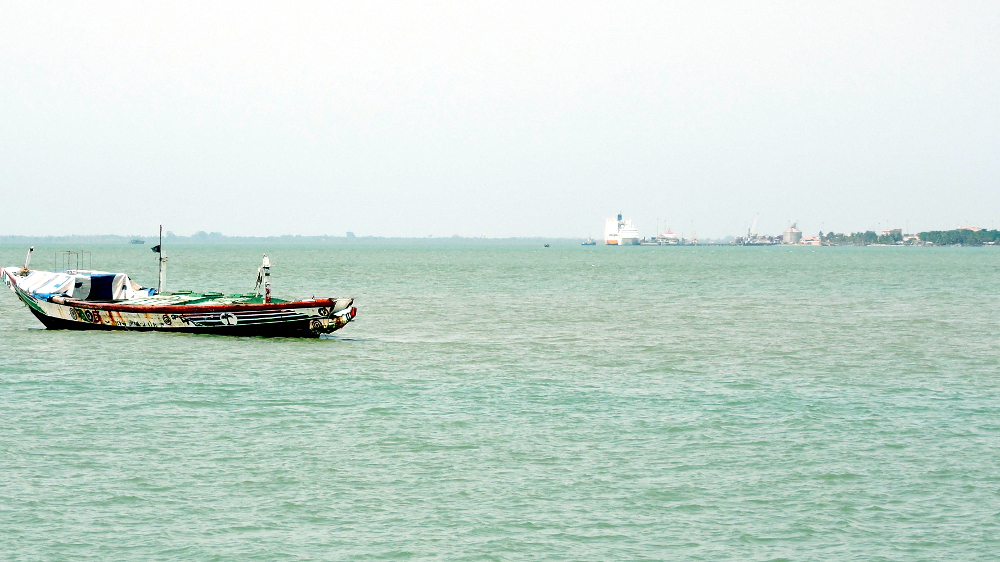 I arrived directly in Banjul. The old buildings made the city interesting but the traffic was a disaster. Therefore, I left quickly and didn’t even stop for photos. It seemed that 90 percent of all vehicles were in the greater Banjul area. When I first crossed the country, I was further east and hardly saw a vehicle.

The traffic was again stopped abruptly when I turned towards the Casamance, Senegal.

The weekend was looming and I wouldn’t be able to get a visa in Ziguinchor before Monday. I turned towards the ocean at Kafoutine. 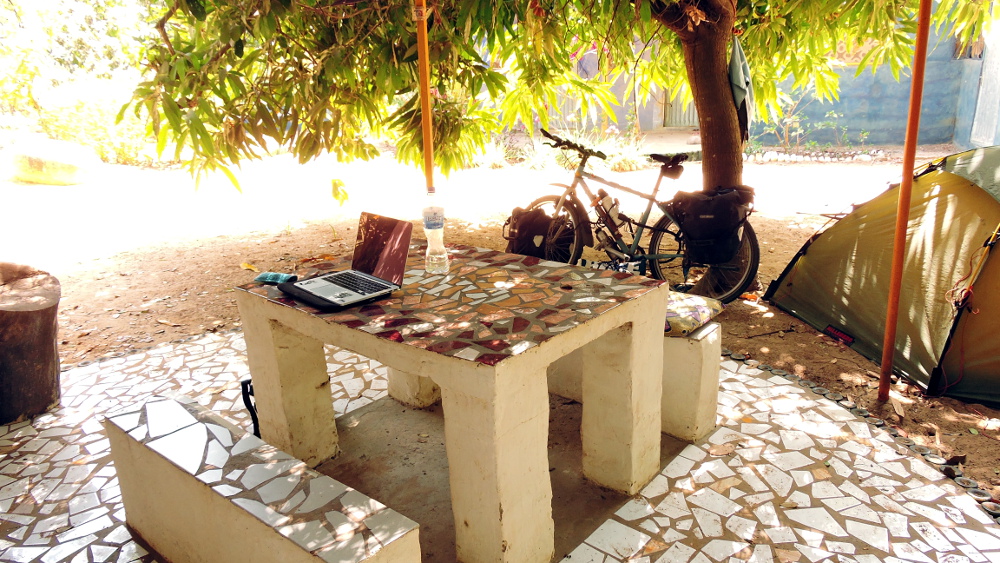 Here I had peace and quiet to continue with the corrections of my book. The campground was managed by a German called Steffi. It was so peaceful that I saw little reason to leave this oasis. I waited until Sunday before I explored the nearby countryside on foot. 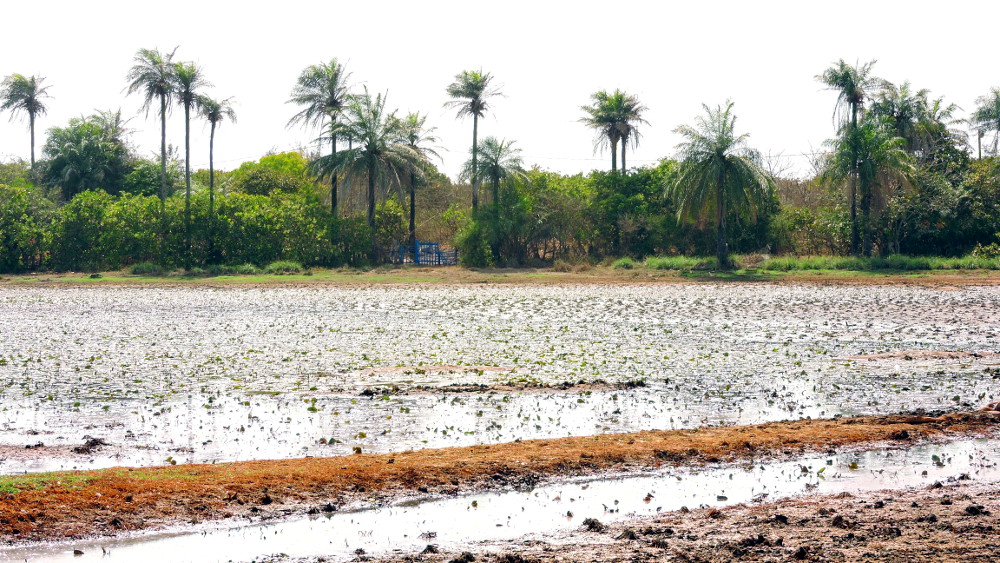 I almost would have missed something if I hadn’t gotten up. 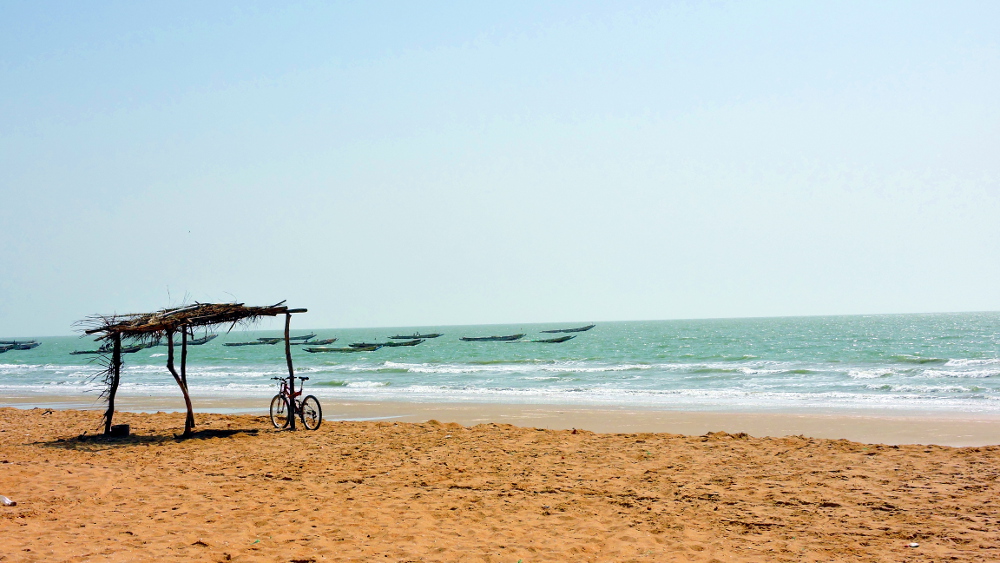 The currents were very strong and the ocean was too rough for swimming. An incredible number of fishermen had settled there. 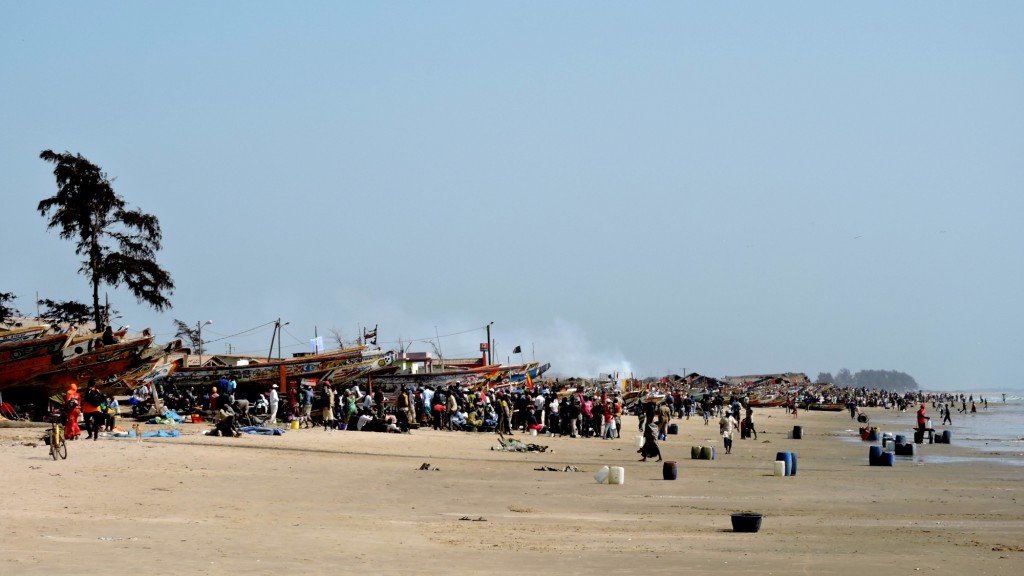 And then it was the last stretch in Senegal, on a dike between mangroves. 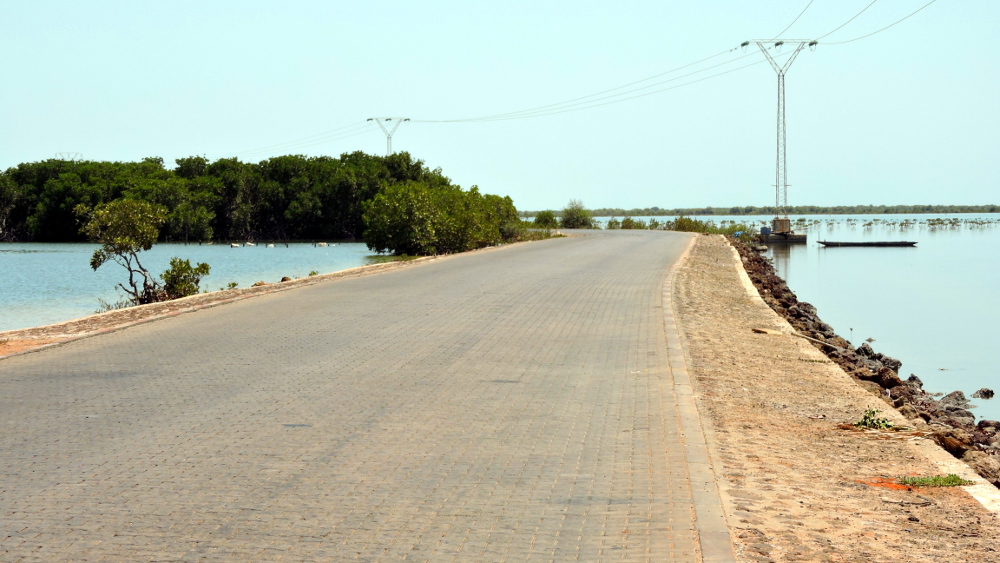 To Zinguinchor. I reached at 2:30 pm but unfortunately the embassy of Guinea-Bissau was already closed.

I stayed once again at Campement Casamance and enjoyed the cool and quiet.

Next morning, I couldn’t make up my mind if I should pack up everything and leave straight away after collecting the visa or if I should stay. I decided to stay. Who could say, if I’d get the visa.

I arrived at the embassy shortly after it opened. After ten minutes and with visa in hand, I left. I had never obtained a visa so quickly and it cost only 20,000 CFA (about 30 Euro).

Quickly I made my way back to the Campement and let Roché spoil me. 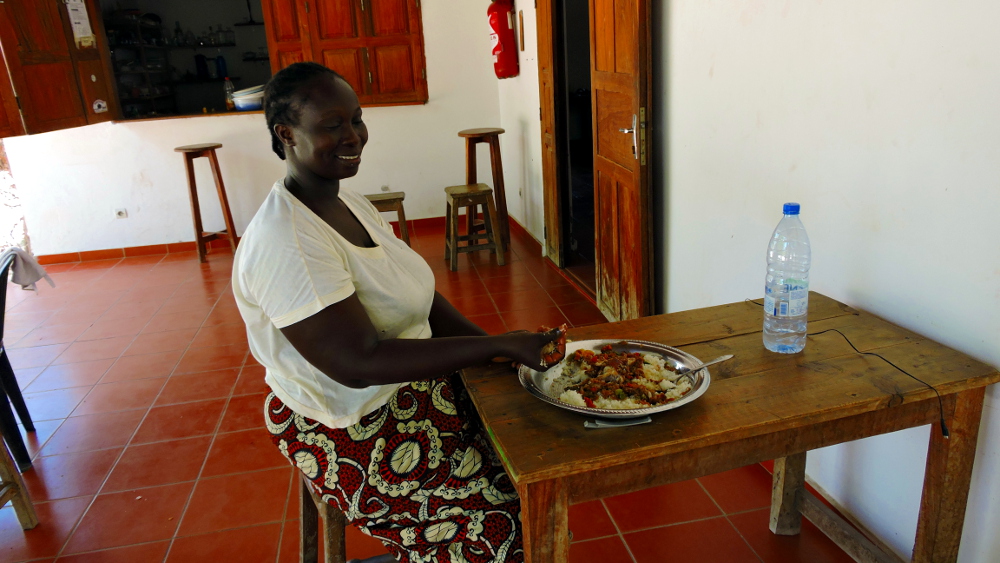 I left Ziguinchor in the happy possession of two visa. After twenty kilometers I reached the border with Guinea-Bissau.

I had spent enough time in Senegal. There had been happy times but overall my impression hadn’t been very positive. I was very much looking forward to the two Guineas. From what I had heard, it would get much better.